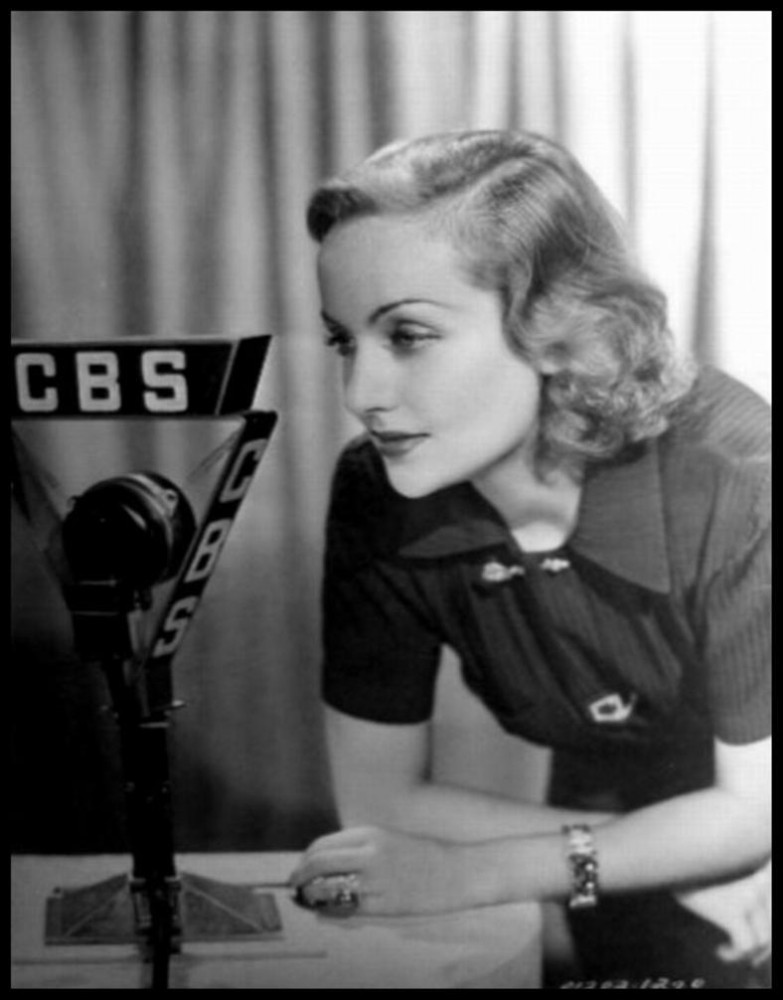 It would be wrong to say Carole Lombard grew up with radio; the Peters family she was part of probably didn't own a radio set until she was in her early teenage years. But while it then wasn't considered as attractive a career option as motion pictures -- after all, people only heard you, didn't see you -- Lombard nevertheless would make her mark in the medium.

Much of that came over KNX in Los Angeles, a pioneering radio station that celebrates its centennial this week (Thursday, to be specific). The station, one of three that went on the air in 1920 and are still with us -- the others are WWJ in Detroit and KDKA in Pittsburgh -- is noting this occasion by looking back at its considerable history (some of which we noted a year ago when the station turned 99, https://carole-and-co.livejournal.com/1029792.html). As it turns out, Carole and KNX may have had stronger ties than many of us realized. 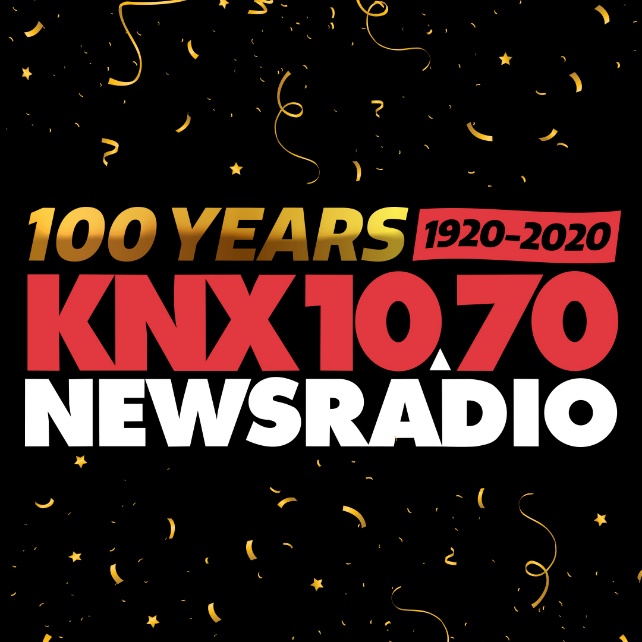 What became KNX began operations in 1920 as an amateur station whose owner, Fred Christian, sold radio supplies. By 1924, Christian found the costs of running a station (then without advertising) was more than he could handle, and sold KNX to Guy Earle, publisher of the Los Angeles Evening Express. With Los Angeles now a movie mecca, Earle deemed radio a sensible tie-in.

With programs sponsored or underwritten (not dissimilar to what public radio does today), KNX became profitable, making $25,000 in 1925. The station moved to new studios on Hollywood Boulevard, and many stars of the late-silent era appeared on KNX. But even closer ties to the movie capital beckoned.

In 1929, Earle -- who by now had sold the Express to focus on broadcasting -- signed a five-year deal with Paramount Pictures, and moved much of its operations to the studios. That April's Photoplay ran a shot of Clara Bow, appearing far more comfortable in front of a microphone than some might believe:

In October, Radio Digest noted the "Paramount Hour" brought many stars before the mike for the first time: Would Lombard be among those stars having their voices heard over KNX after she signed with Paramount in 1930? More research is needed, as few broadcasts from the early '30s were recorded. 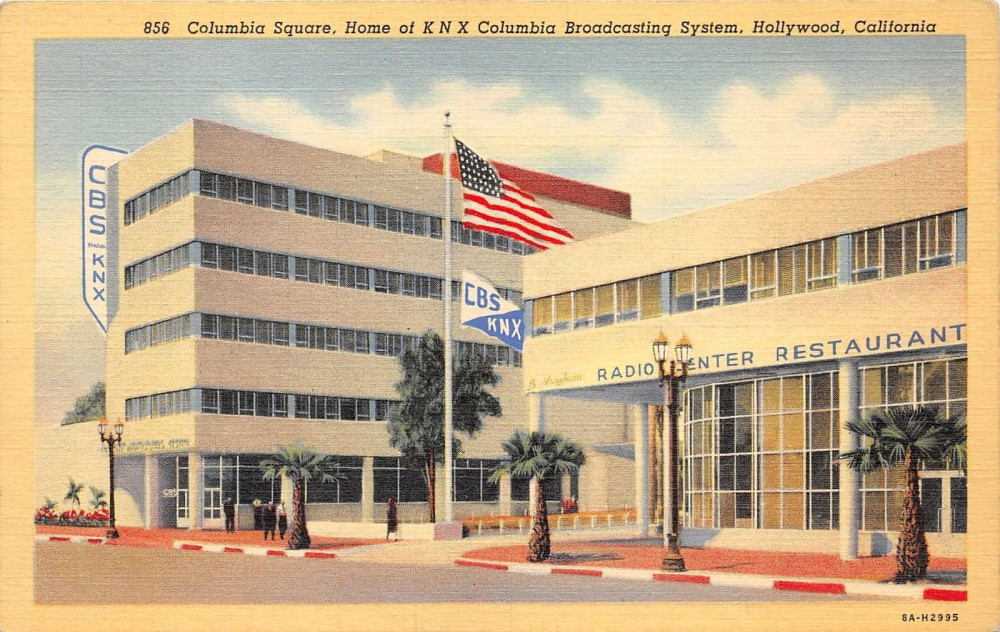 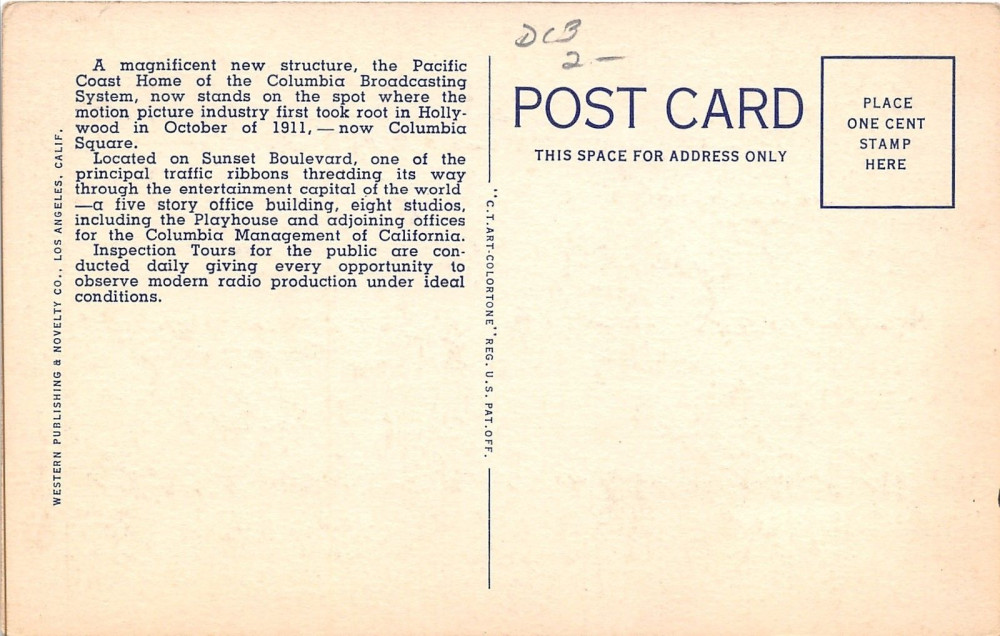 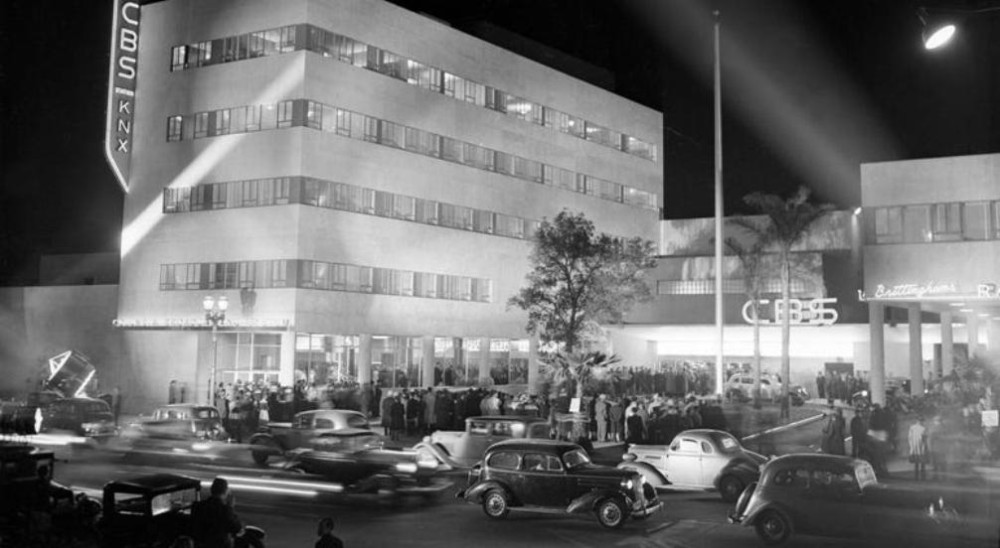 We do know that by the time CBS had bought KNX and completed its palatial, modernistic Columbia Square studios on Sunset Boulevard on April 30, 1938 (Al Jolson irreverently quipped on the air the futuristic facility resembled "Flash Gordon's bathroom"), Lombard was comfortable with radio. Over the next 3 1/2 years, she'd appear on KNX for the likes of "Lux Radio Theater" and other shows, most of which have been preserved.

The radio industry of World War II and the postwar era gradually changed, as television intruded onto the scene and dramatic or comedy programs slowly fell by the wayside. (There still were many superb programs made, such as the brilliant western "Gunsmoke" with William Conrad as Marshal Dillon. It originated at Columbia Square; below, he and Georgia Ellis, radio's "Miss Kitty," go through a scene.) 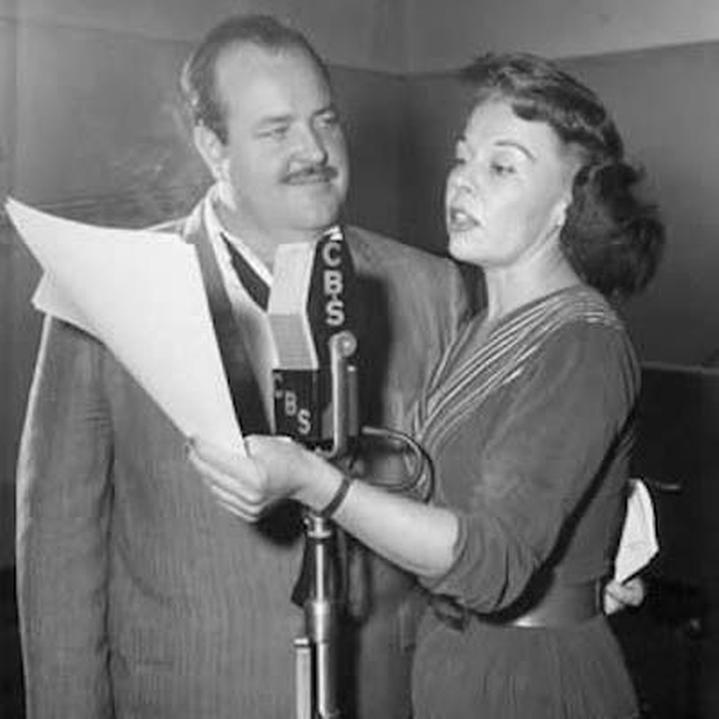 Stations such as KNX gradually focused on localized content, phasing out dramatic programs by 1962. In its place were local hosts, who occasionally played records while doing comedy bits and interviewing notables. KNX had one of the best in Bob Crane, who spent nearly a decade as its morning man (shown below in 1960). 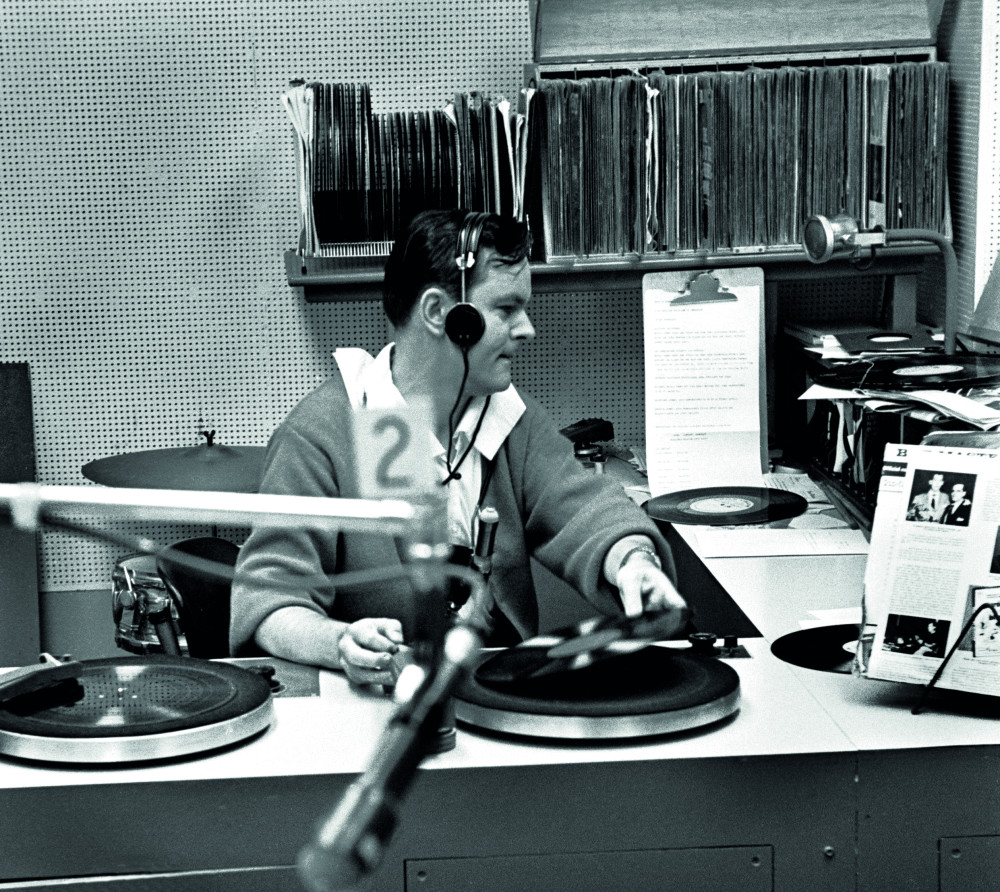 But KNX had 50,000 watts and a clear channel signal that blanketed the western U.S, at night. In 1968 it decided to follow an industry trend and go "all news," a format it's largely retained to this day. In 2005, KNX abandoned its Columbia Square home -- early in the television era, it became apparent TV and the building didn't mix -- and moved its newsgathering operations into a building on Wilshire Boulevard. Here's the newsroom in 2005, and part of the staff relaxing (and celebrating something) at lunch in 2017: 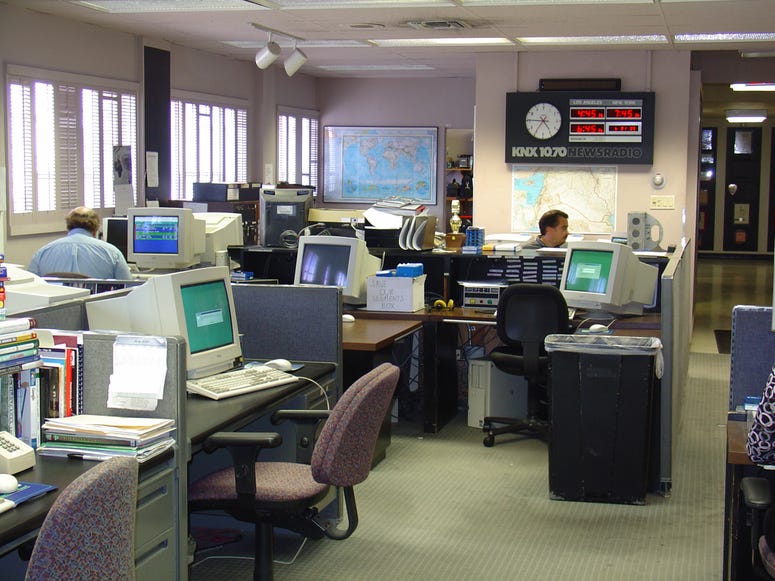 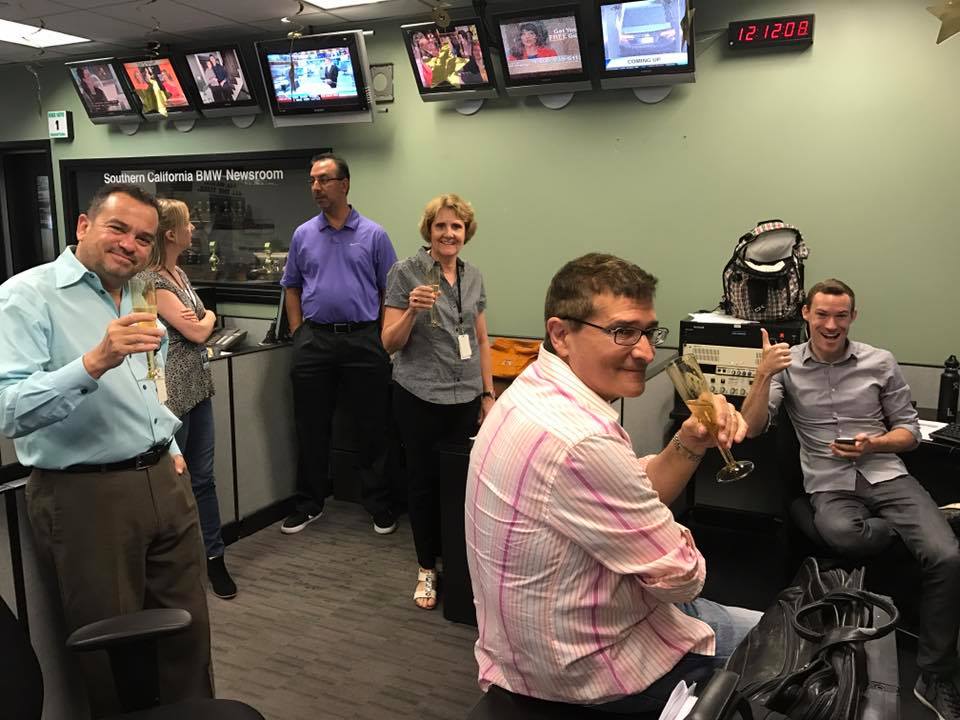 Learn more about the station at https://knx1070.radio.com/articles/knx-100-year-anniversary -- it has a link enabling those outside the area to hear it. At :17 after the hour this week, KNX is running segments on its history, and on Thursday you'll be able to hear vintage jingles and the like as the station goes old-school.
Collapse