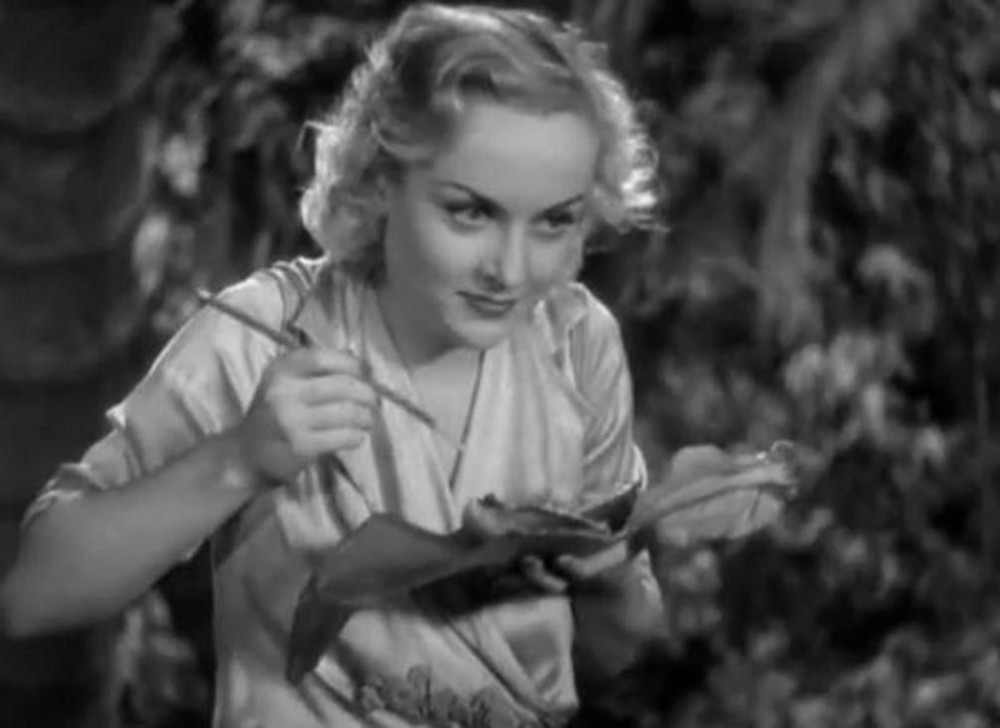 Carole Lombard's career was reaching new heights in the spring of 1934, thanks to films such as "We're Not Dressing" and the upcoming "Twentieth Century," but that didn't mean she couldn't register some fear.

Not of fame, mind you, but of heights. And as it turned out, her old Cocoanut Grove dance rival felt much the same way.

We learn this in the May 1934 issue of Modern Screen, with Katharine Hepburn on the cover: The story, titled "I'm Afraid," discusses what movie stars are afraid of (aside from bad reviews, of course): 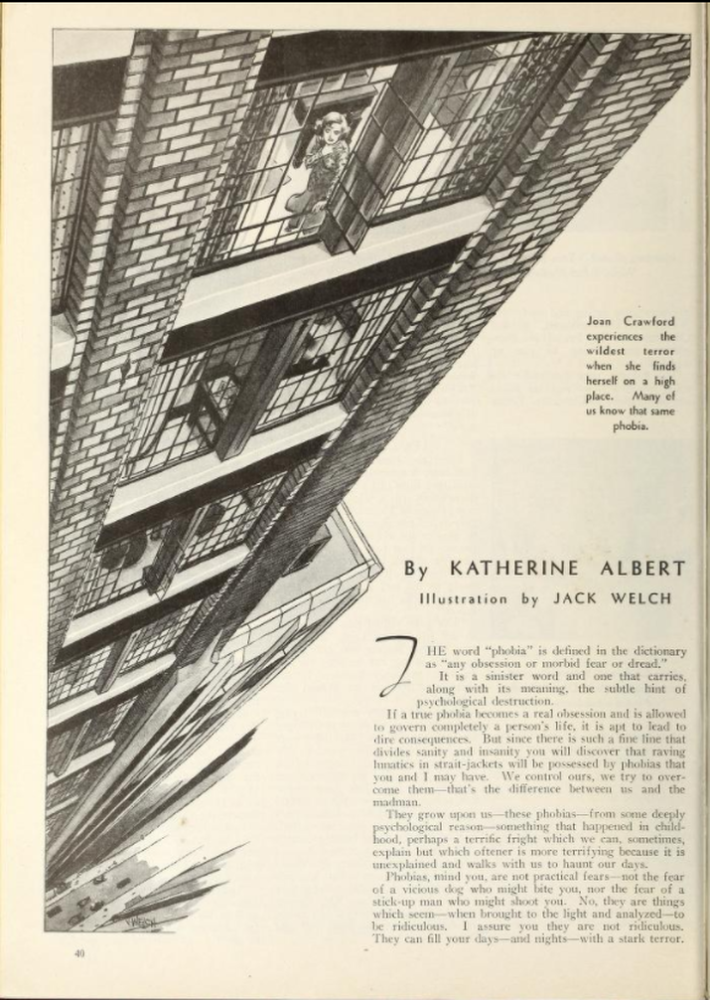 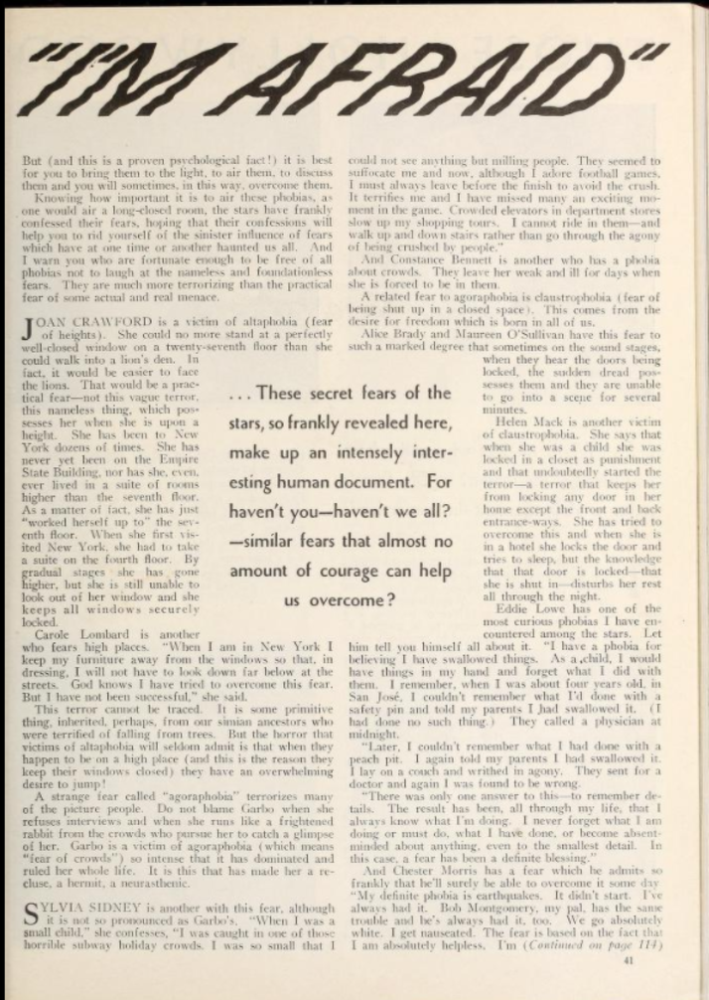 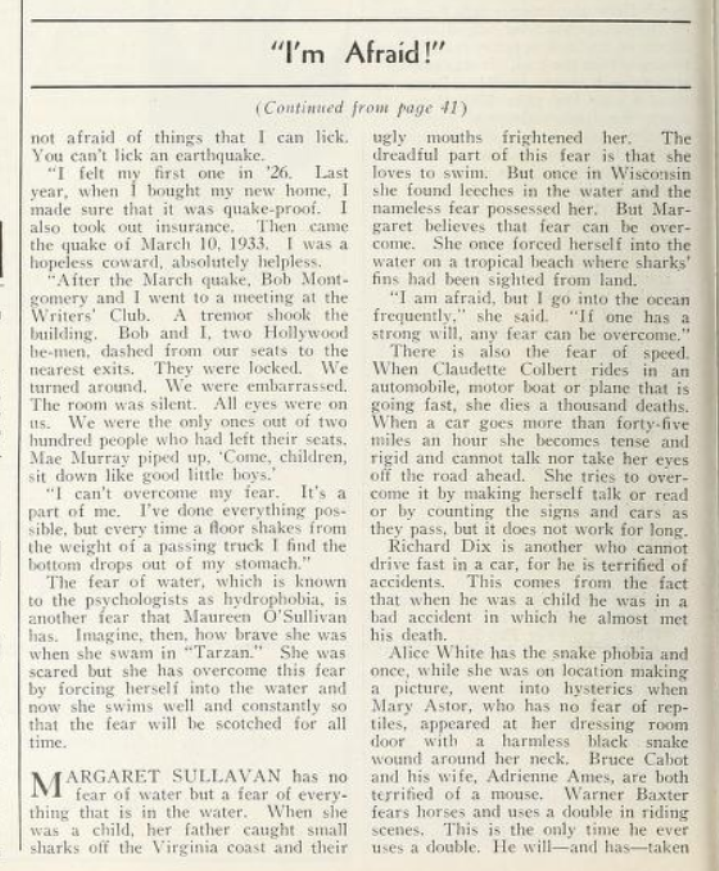 The segment where Lombard and Joan Crawford discuss their fear of heights? It's here: 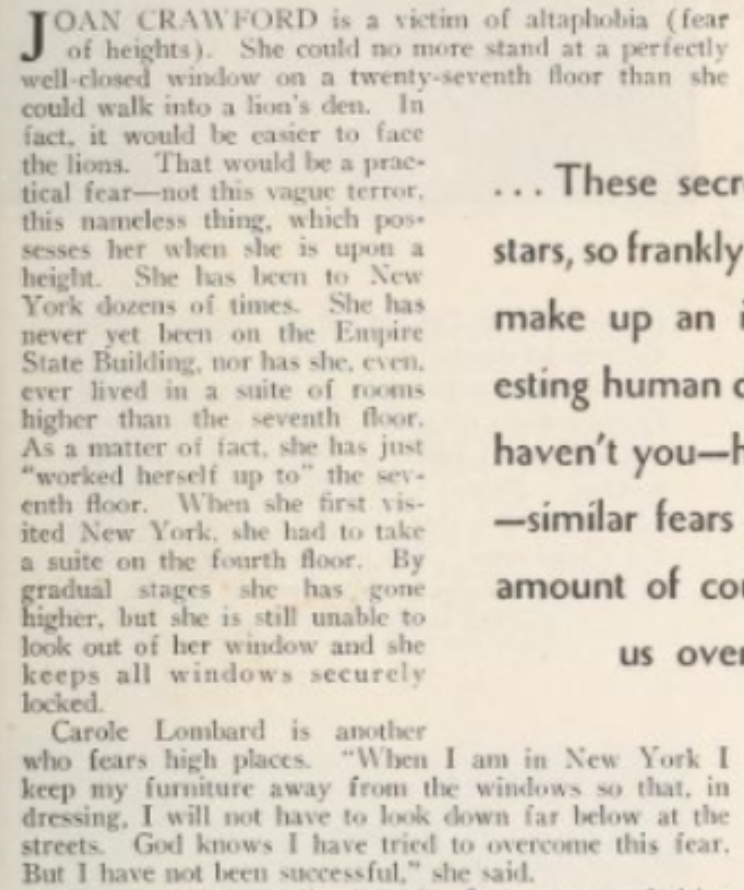 Although this issue has no specific Lombard articles, she's well represented. Note these photos. First, Carole, her brother Stuart (misspelled "Stewart") and Bing Crosby on the set of "We're Not Dressing": 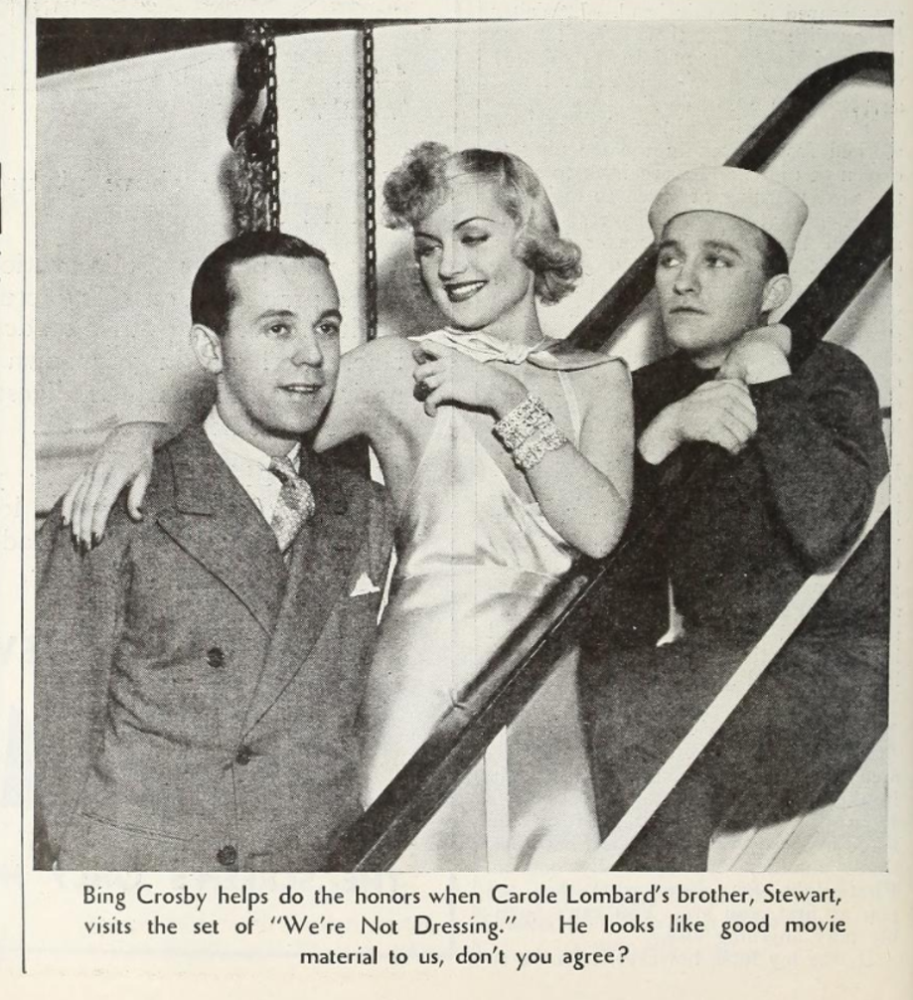 Next, Lombard, Russ Columbo, Madalynne Field, director Walter Lang (who "Fieldsie" would marry) and Marlene Dietrich at the Cocoanut Grove: 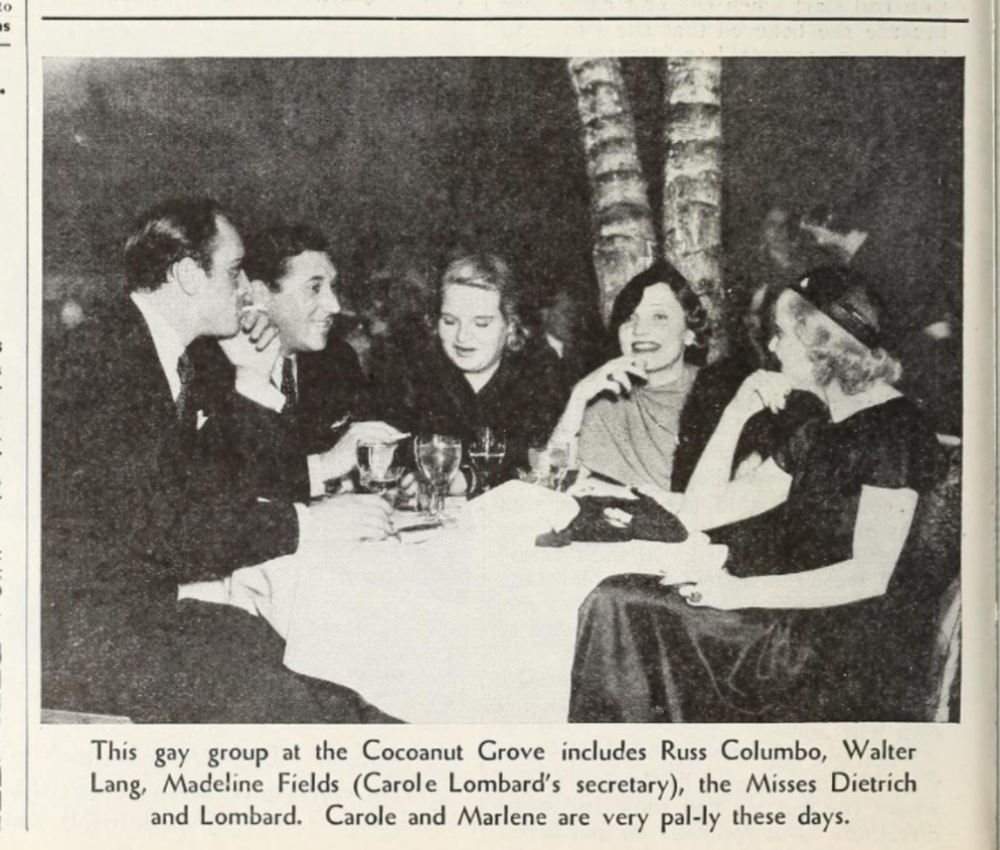 Lombard's dance film "Bolero" gets a "B" from the magazine... 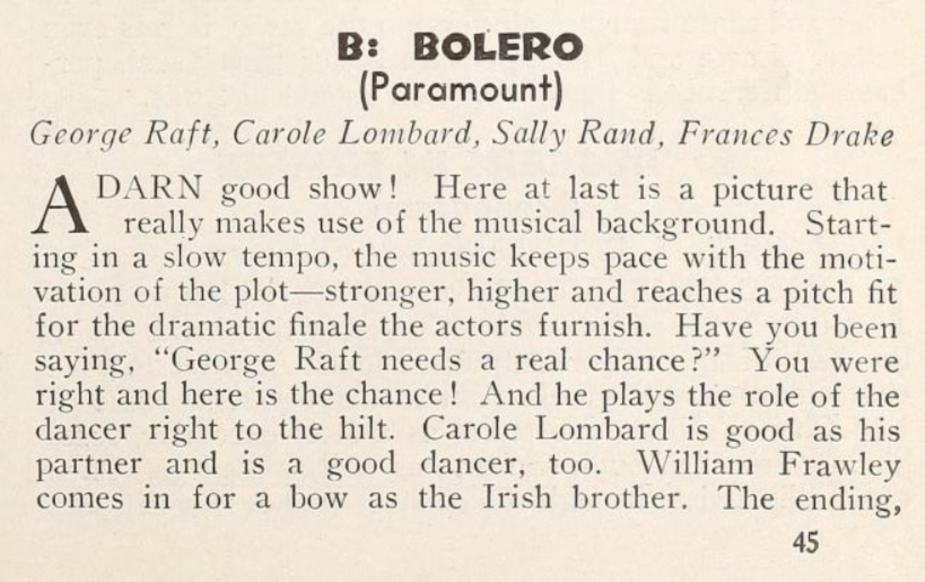 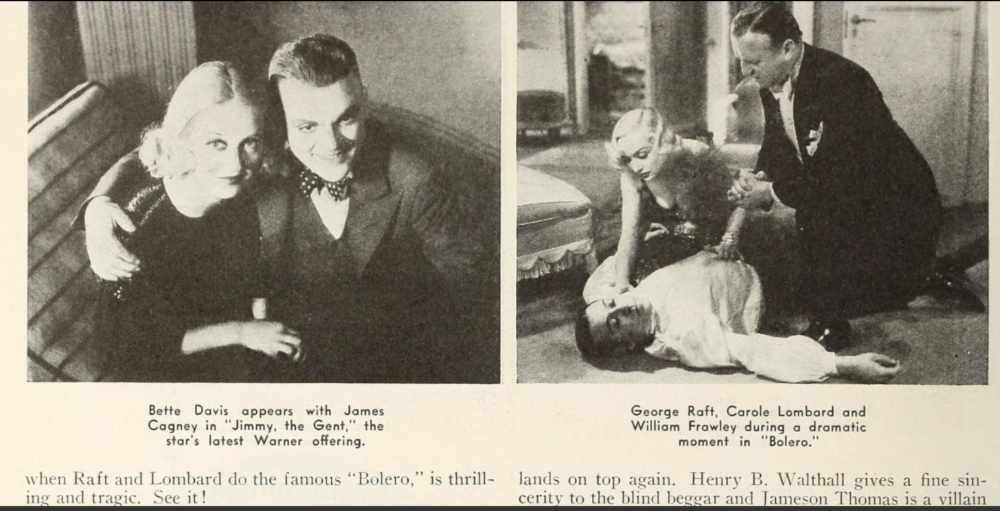 ...far better than "White Woman," Carole's campfest with Charles Laughton, which got a "D" on its report card.

There's this stunning photo of Carole: I'm guessing "We're Not Dressing" was the picture in question.

The issue is complete, in fair condition. It sells for $22.50. If interested, go to https://www.etsy.com/listing/679094026/vintage-1934-may-modern-screen-movie?ga_order=most_relevant&ga_search_type=all&ga_view_type=gallery&ga_search_query=carole+lombard&ref=sr_gallery-1-21&organic_search_click=1&frs=1.
Collapse