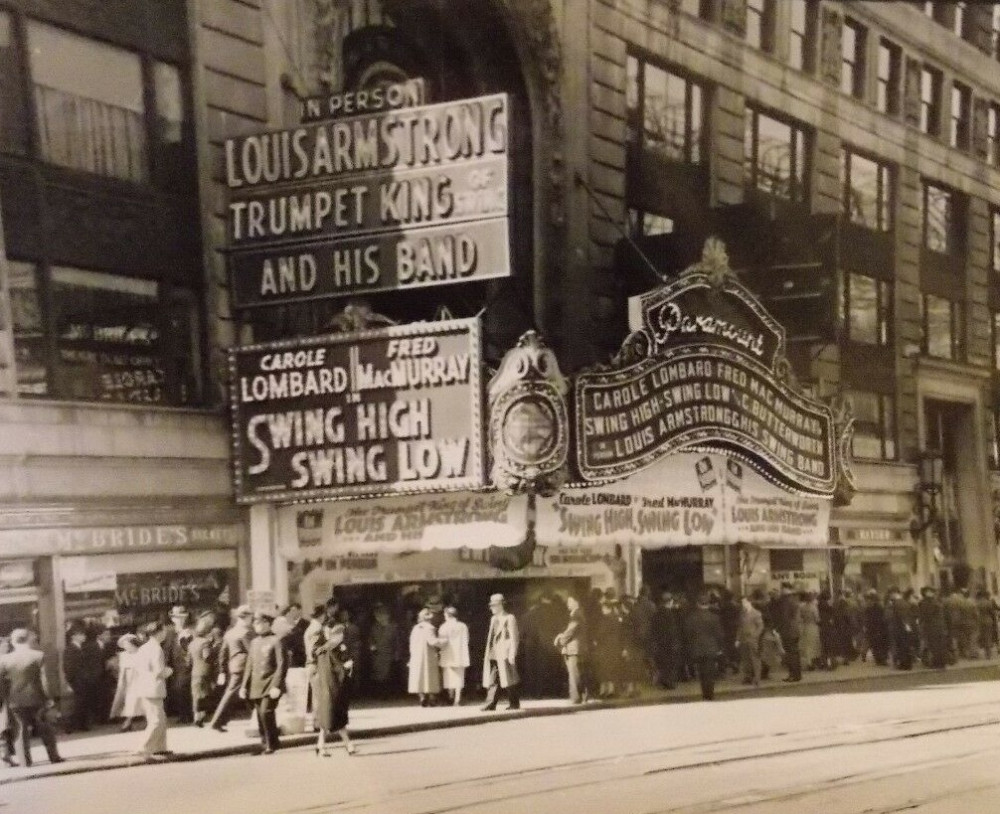 Did Carole Lombard ever meet Louis Armstrong, shown here billed as the musical guest at the Times Square Paramount when "Swing High, Swing Low" was featured in the spring of 1937? While we have no photographic proof, the chances are good that if they didn't meet, she at least may have seen him perform. 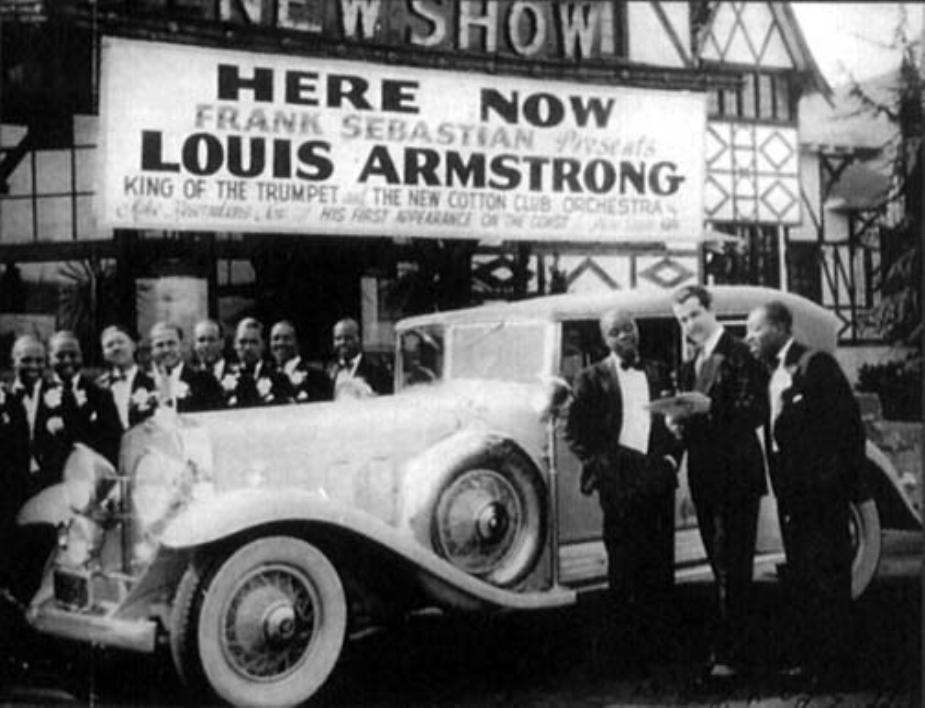 In May 1930, Armstrong -- whose New York band had broken up the year before -- accepted a long-term gig to front the house band at Frank Sebastian's Cotton Club in Culver City. He'd work with an ensemble featuring a talented drummer named Lionel Hampton. Some months later, the group's vibes player left, Louis suggested Hamp give it a try, and a legendary career took off in a new direction.

It's entirely possible Lombard, who'd just been hired by Paramount that spring, could've dropped by to Culver City (home of her former studio, Pathe) to see Armstrong. Years later, they may have met at Paramount, since they had a mutual friend in Bing Crosby (later a Decca labelmate of Louis').

Armstrong was busted for marijuana possession in November 1930 (a few years earlier, he paid tribute to the weed with a piece titled "Muggles") and spent nine days of a 30-day sentence before his release in March 1931. Once released, he immediately went to Chicago. 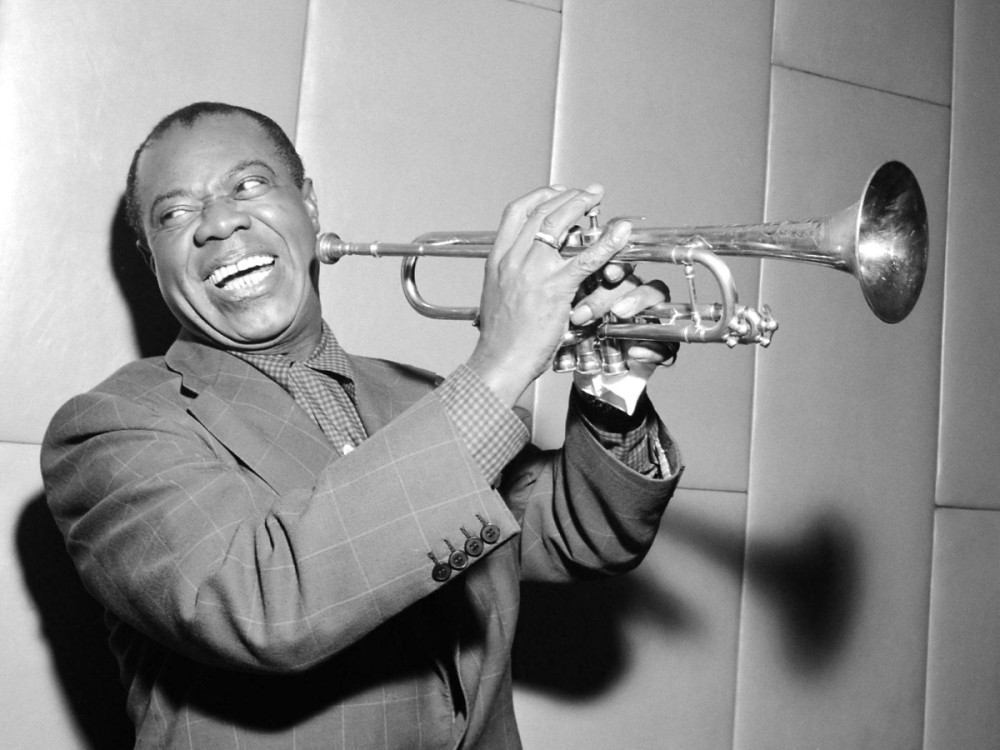 Today marks the 119th anniversary of Armstrong's birth, one he never celebrated since he believed he'd been born July 4, 1900. (His correct birth date was found in the 1980s from New Orleans baptismal records.) His legacy to jazz, swing and American popular music in general cannot be overestimated. 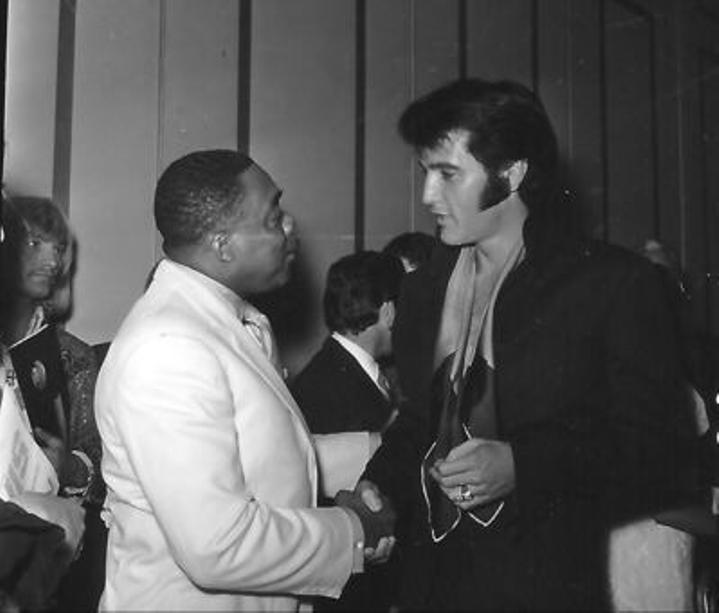 I love the above photo, taken in 1969 in Las Vegas -- Louis Armstrong meets Elvis Presley, a pair of musical revolutionaries. Each performed material arguably the bedrock of their respective genres, Armstrong's Hot Five recordings in the late '20s for jazz, Presley's Sun sides for rock.

Like Elvis, Louis endured a hardscrabble life early on, each rescued by music. Years later, Armstrong wrote his memoirs from his home in the Corona section of Queens (now the Louis Armstrong House Museum), using a typewriter to transcribe his life story: 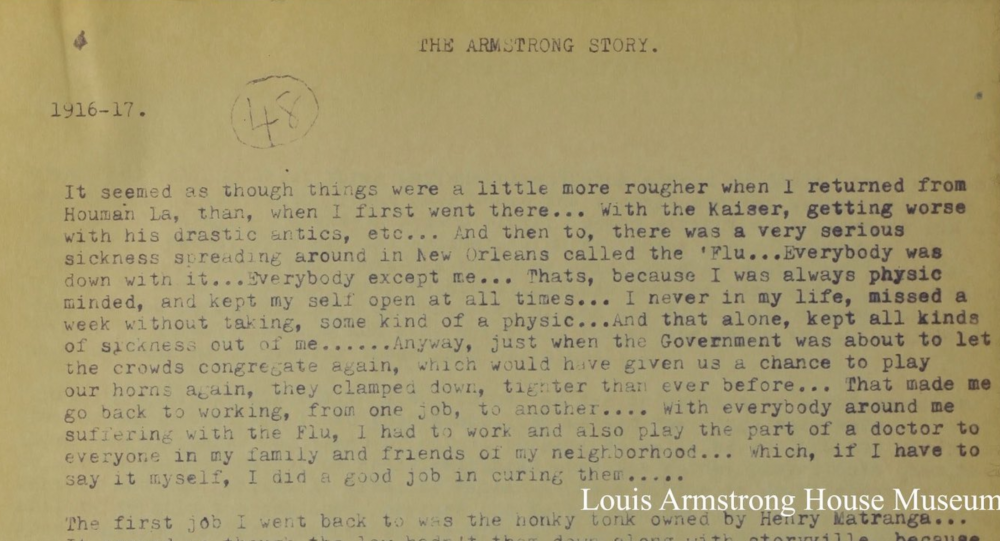 Louis was fortunate to escape the effects of the influenza epidemic, as New Orleans had an assertive approach to dealing with the flu. But while he kept in good health in 1918-1919, gigs for the teen were relatively few, and he spent much of his time attending to ailing neighbors.

Learn more about this stage of his life at http://www.openculture.com/2020/04/louis-armstrong-remembers-how-he-survived-the-1918-flu-epidemic-in-new-orleans.html?utm_source=mj-newsletters&utm_medium=email&utm_campaign=daily-newsletter-08-04-2020.