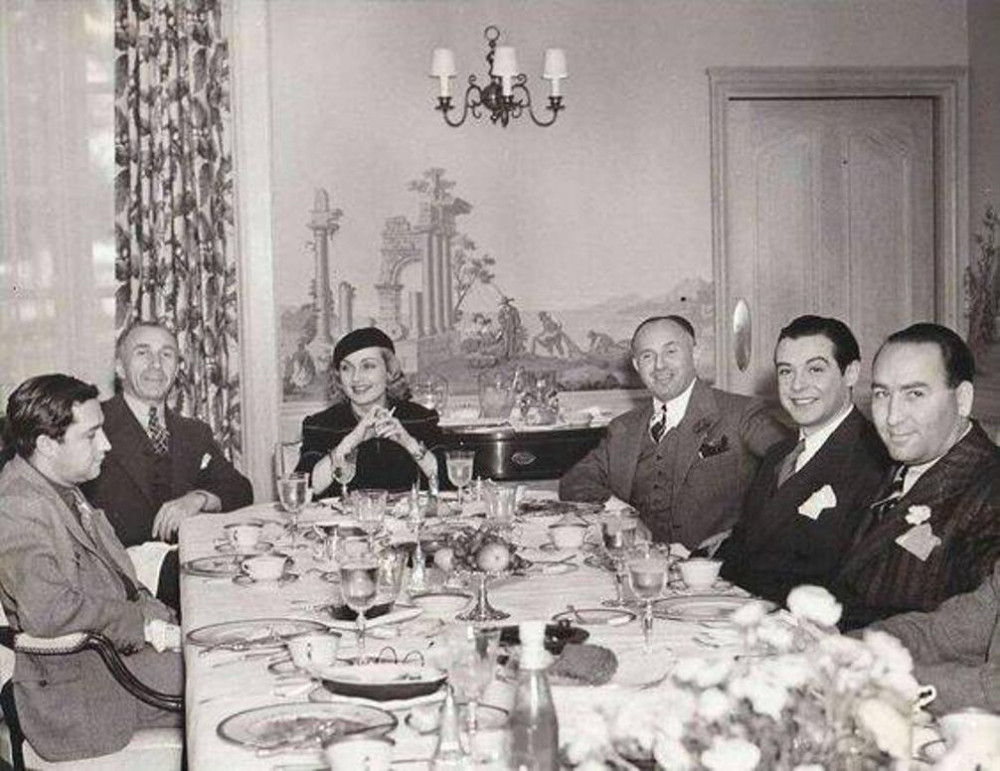 Carole Lombard is shown in the Warners offices in Burbank after signing a contract with the studio. It's the fall of 1937, and in industry parlance, she was hot, with not one, but two hits in theaters -- Selznick International's Technicolor comedy "Nothing Sacred," and what would be her final film for Paramount, "True Confession."

The Warners dream? Make Lombard the comedic equivalent of their queen of the lot... 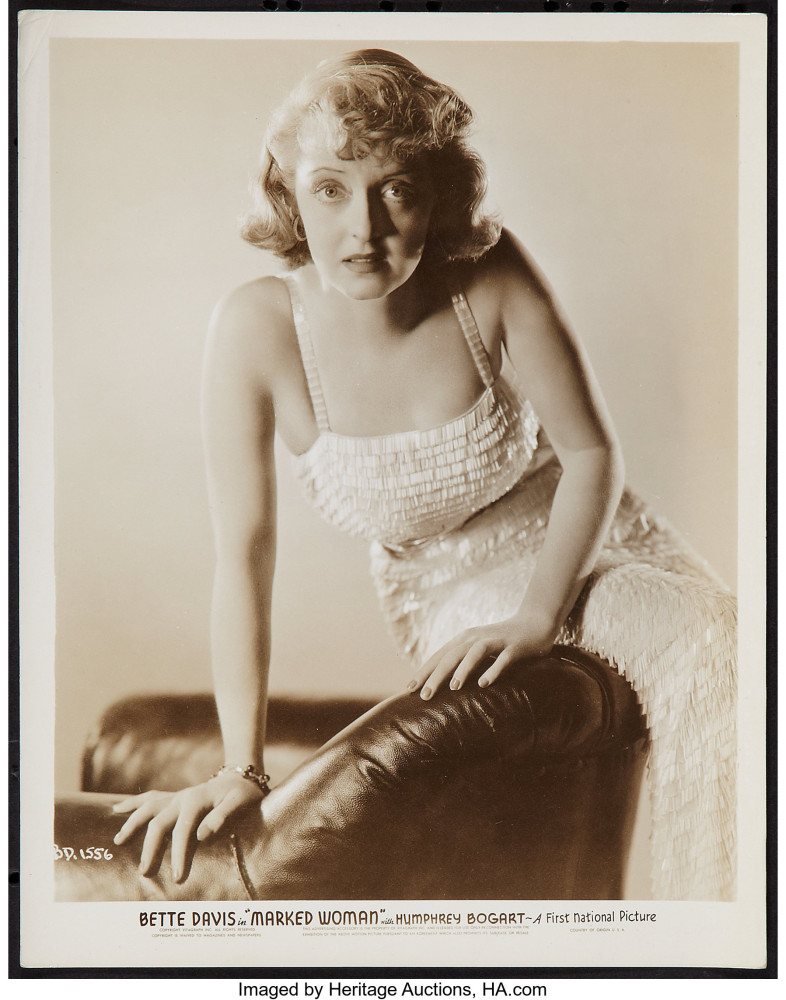 ..Bette Davis, shown in publicity for the 1937 drama "Marked Woman."

Alas, it wasn't to be. While Lombard twice had turned down loan-outs to Warners earlier in the decade (for the James Cagney films "Taxi!" and "Hard To Handle"), much had changed since pre-Code days. The comedy Carole excelled at -- screwball -- simply wasn't in Warners DNA.

The vehicle the studio gave her was an ill-conceived jalopy... 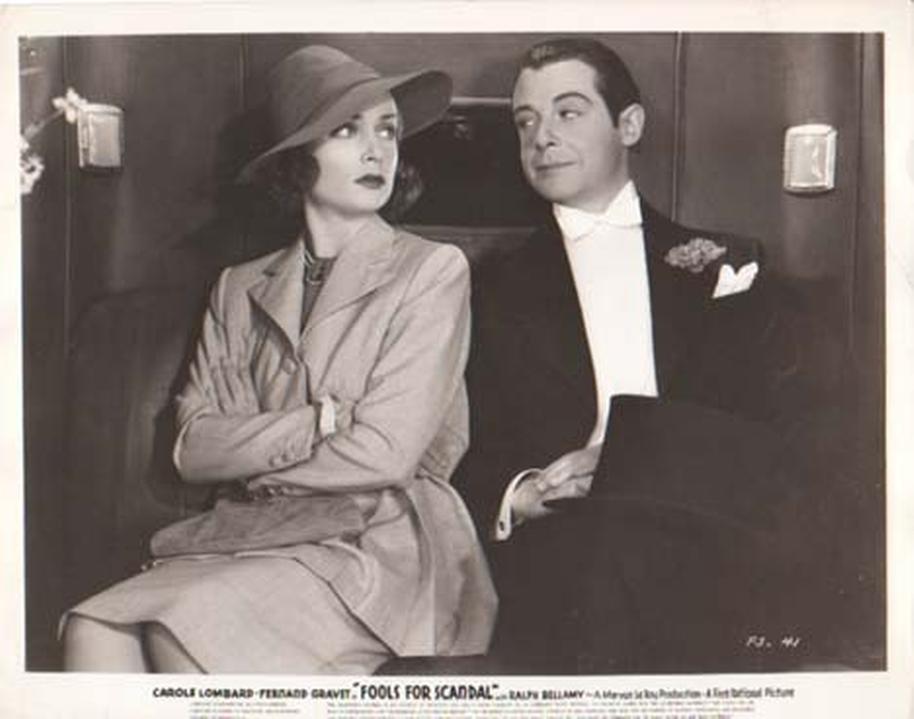 ..."Fools For Scandal." Her co-star, Fernand Gravet, wasn't compatible with Carole, the story was clumsy and she received little help from talented supporting players such as Ralph Bellamy and Marie Wilson. Lombard's career momentum ground to a halt, and she and the studio parted ways after the film did middling business.

I have no idea how well Carole knew Bette, if she did at all; I've never seen them pictured together. (Both were associated with a local dog charity called the Tailwaggers.) While Lombard was on the lot, Davis made her a subject of a drawing: 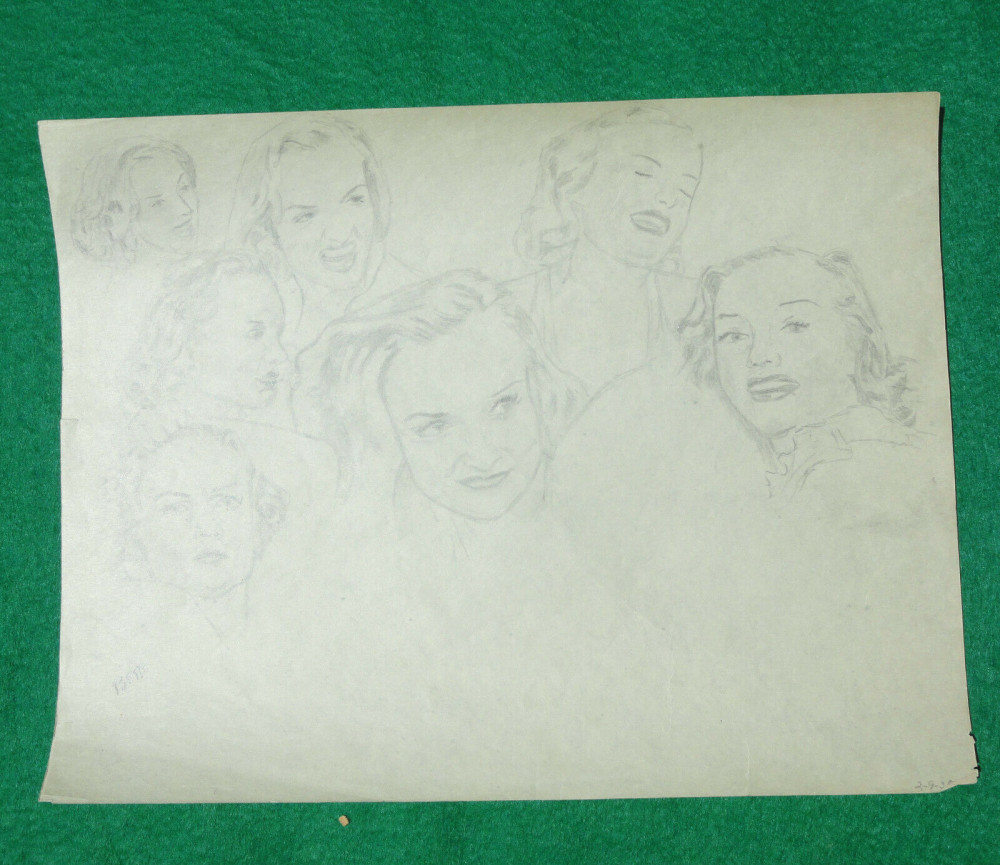 Lombard was ID'd on the back: 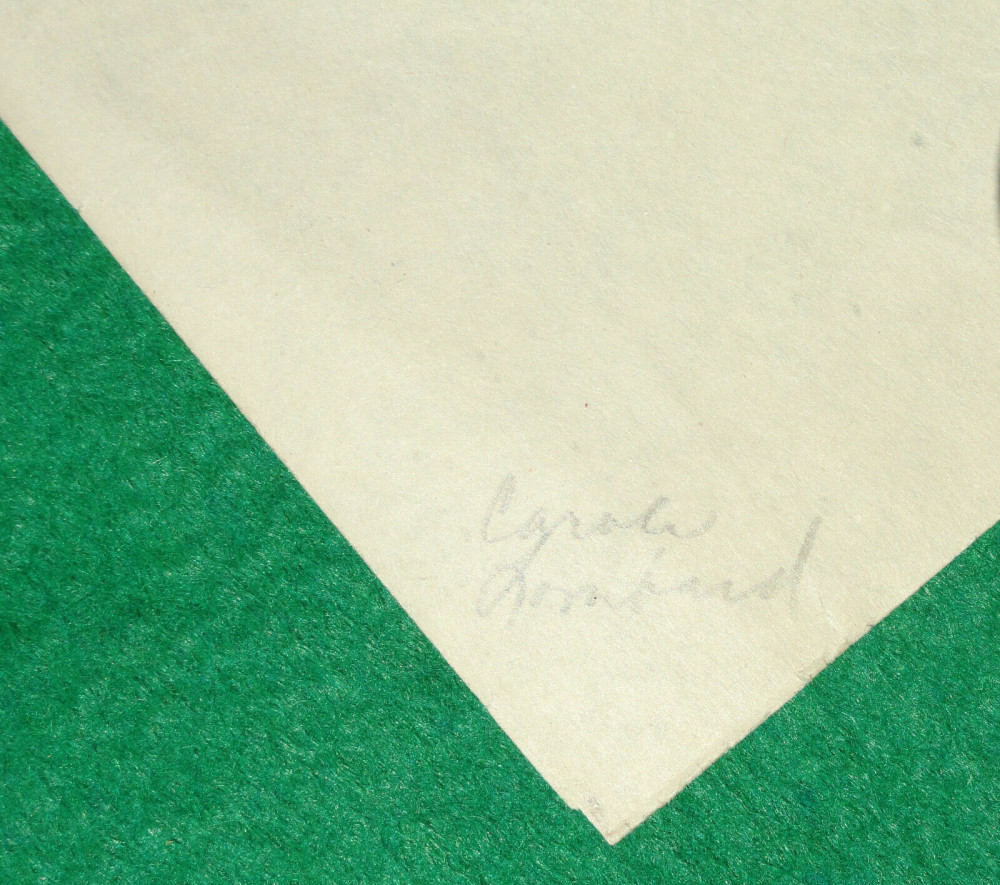 How do we know Davis drew these images? The person selling this and other drawings explains: 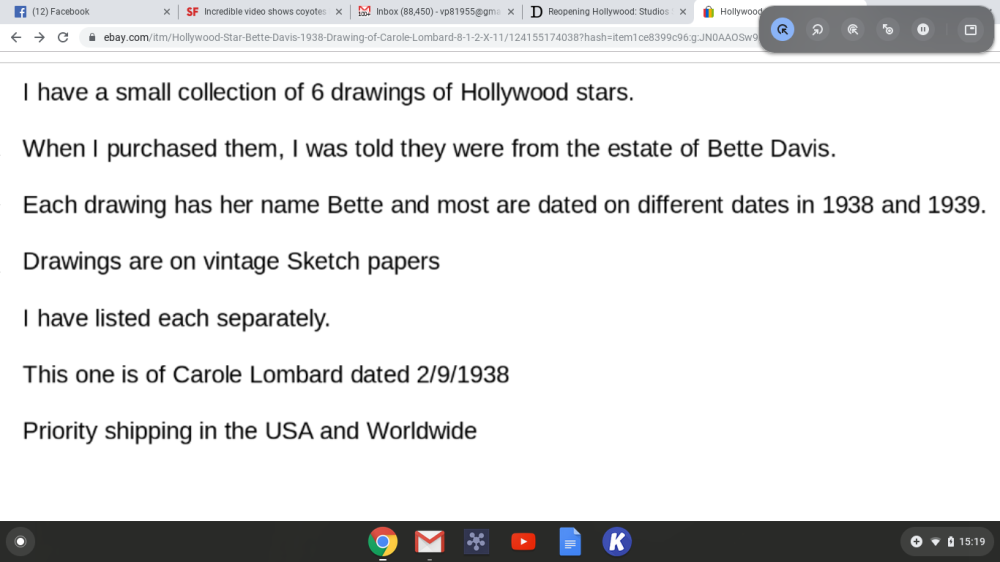 Feb. 9, 1938...that would've been a Wednesday, and Carole would've been in the homestretch of "Fools For Scandal." Perhaps Davis -- who likely had just finished "Jezebel," for which she would win a Best Actress Academy Award -- dropped by to draw her.

These drawings are on vintage sketch paper and their edges are frayed. But they're one of the rare links between two Hollywood icons. (On Oct. 31, 1938, Lombard would pinch-hit for Davis in a "Lux Radio Theater" adaptation of "That Certain Woman.")

Davis filmed "Jezebel" at Stage 20 at Warners, which since 2013 has been home base for one of TV's shining sitcoms... 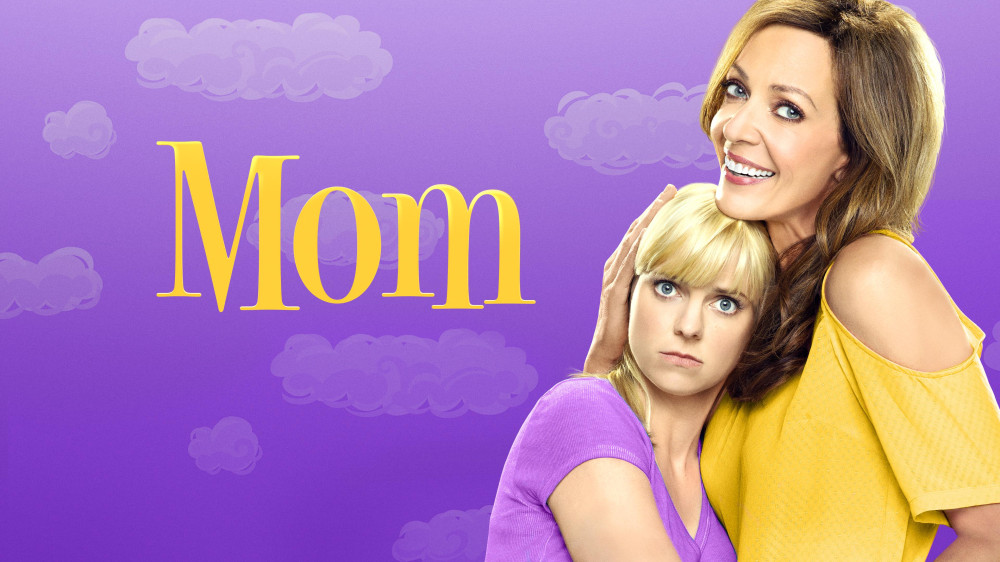 I've raved about this superbly-acted, wonderfully-written Chuck Lorre series for years, and tonight (9/8c, CBS), it "ends" its seventh season. Why the quotation marks? Like nearly everything else in the world, it's been affected by the coronavirus crisis. 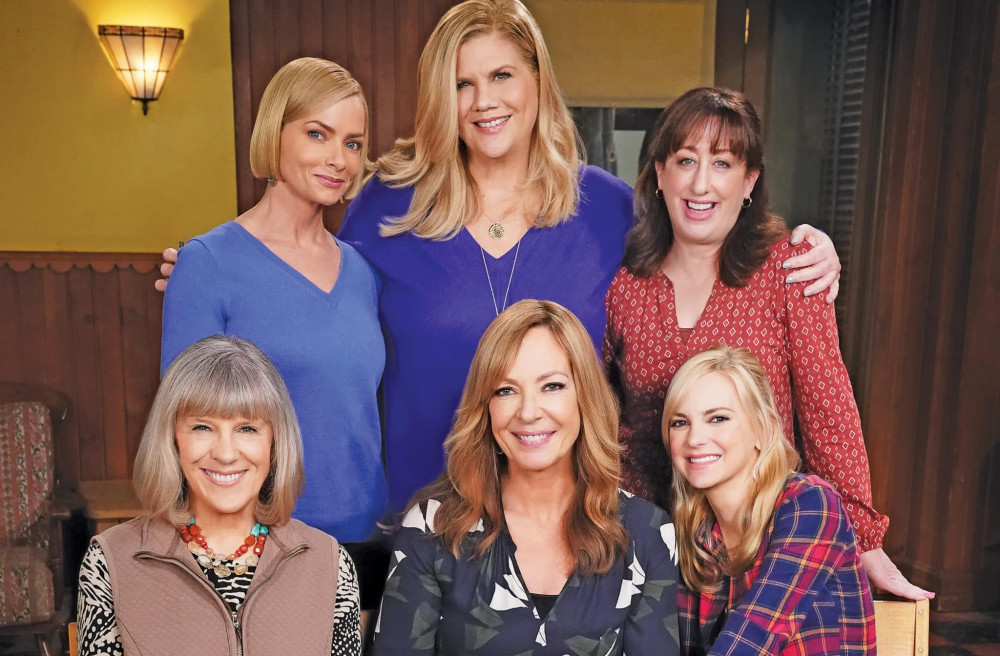 Tonight marks the 20th episode of season 7; two more were on the docket when production was suspended in mid-March. So for the cast (top, Jaime Pressly, Kristen Johnston, Beth Hall; bottom, Mimi Kennedy, Allison Janney, Anna Faris), writers and production crew, this is an unfinished symphony of sorts. The story arc may be left hanging until the two remaining eps can be made...but when they will be made, and under what conditions in this new world we've entered, is anyone's guess. The entire entertainment industry -- TV, films, web series -- is in suspended animation. (Thankfully, since leads Faris and Janney agreed to a two-season deal in early 2019, "Mom" is assured of an eighth season. Many "on-the-bubble" shows don't have that luxury.)

So for the loyal army of "Mom" fans, this'll be the final new episode for awhile. They can get their "fix" (the six ladies above play members of an AA group) through the many outlets (FXX, the Paramount Network, CMT, Nick at Nite) that carry the first six seasons in reruns.

Here's a clip from tonight's ep, as the gals go on a retreat: