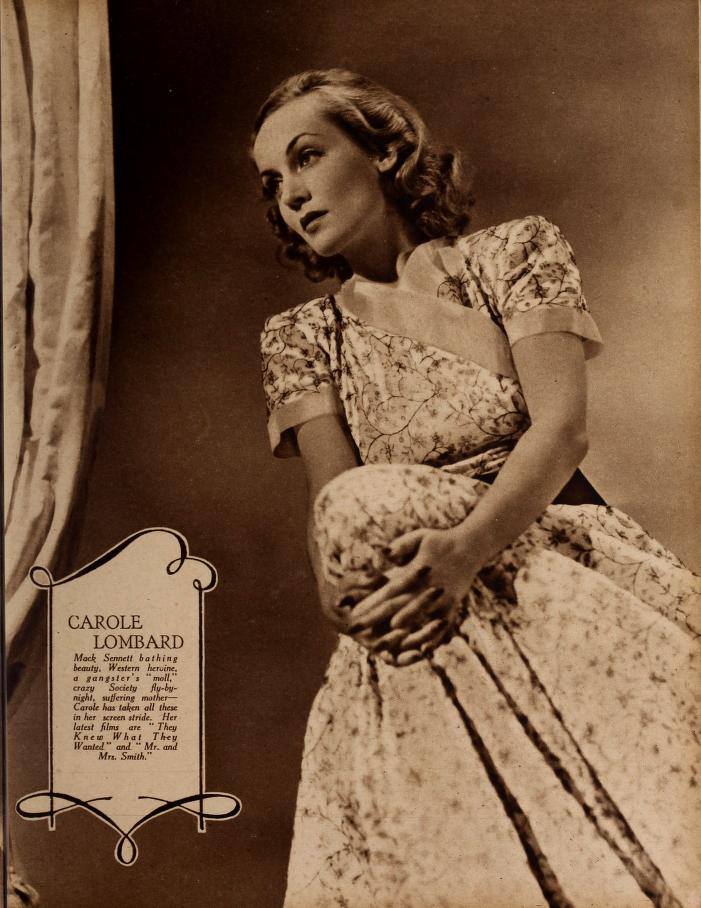 While Carole Lombard wouldn't live to see many post-World War II stars perform on screen, during her lifetime she was aware at least two of them existed. Olympic-level swimmer Esther Williams had a screen test with Clark Gable that Carole witnessed (https://carole-and-co.livejournal.com/433930.html). As far as the other one, I'm not sure they ever met, but during 1941 Lombard likely read of her exploits in the press, regarding a movie she made that year which ran afoul of the Hollywood Production Code.

You know her from this famed pose: 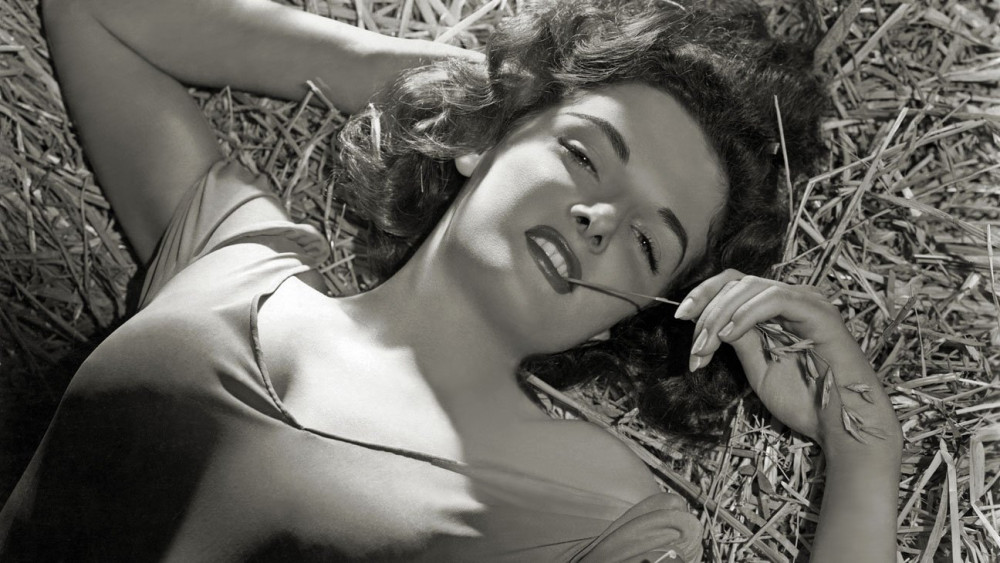 Yep, it's Jane Russell, in a portrait taken by George Hurrell for the Howard Hughes film "The Outlaw," made in 1941 but not initially issued until 1943 and not widely seen until '46 due to censorship problems over her ample bustline.

But as early as January 1941, the Hughes publicity machine (led by Carole's old Selznick International PR pal Russell Birdwell) was working on Russell's behalf. Lombard -- no stranger to Howard's machinations (in early 1929, she may have lost her virginity to the eccentric aviation-movie mogul) -- might have seen this in the Los Angeles Times that Jan. 24 (double-click to see it at full scale):

Russell could've wound up a one-note figure (pardon the pun), a joke in the industry. That she didn't is a tribute to both her talent and her drive. Like a prior Hughes "discovery," Jean Harlow, Jane complemented her sex appeal with a blend of humor and toughness; unlike Harlow, Russell was a skilled singer who held her own in musicals.

Moreover, neither took their personas seriously. Jean was a low-key type who enjoyed writing, while Jane was deeply religious and did plenty of charitable work for orphans. Consequently, Russell carved out a considerable career well before becoming a bra spokeswoman for "full-figured gals" in later decades. (She died in February 2011.) And in April 2020, Jane is Turner Classic Movies' Star of the Month:

The TCM tribute covers most of Jane's best films. The schedule (all times Eastern):

April 6
* 8 p.m. -- "The Outlaw" (1943). A sexy take on Billy the Kid (portrayed by another film newcomer, Jack Beutel), Russell steals the show as planned playing Rio, mistress of Doc Holliday (Walter Huston). Hughes ostensibly directed, but another Howard (Hawks) directed many segments and assisted with the screenplay. 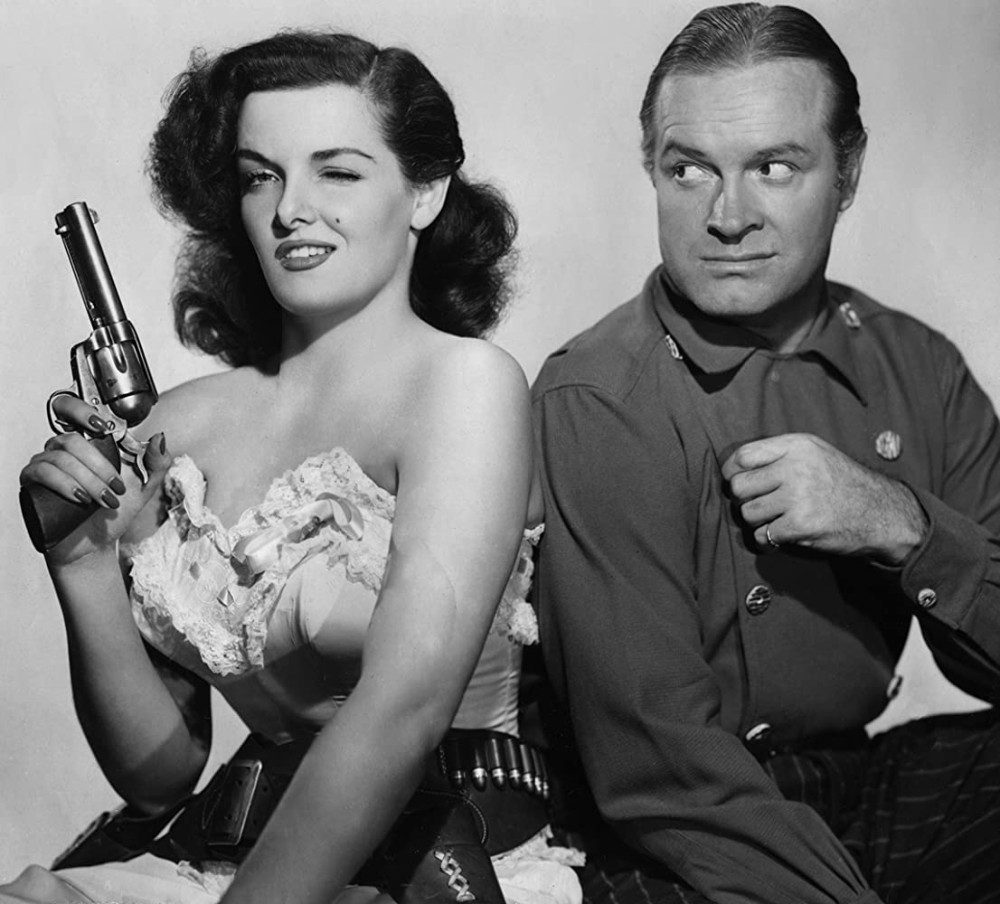 * 10:15 p.m. -- "The Paleface" (1948). Westerns have long been a subject of satire -- think "Destry Rides Again" (1939) or "Along Came Jones" (1945) -- but this spin on the genre revived Russell's career. This time, she plays the legend (Calamity Jane), who marries inept, cowardly dentist Peter Potter (Bob Hope). She makes a great foil for him. (Alas, rights issues prevent TCM from airing its equally funny 1952 sequel, "Son Of Paleface," or "The Tall Men," her 1955 western with Clark Gable.)
* midnight -- "Double Dynamite" (1951). This charming comedy starring Russell and Frank Sinatra as bank employees, along with Groucho Marx, was actually filmed in 1948, but Hughes held its release for three years (and RKO changed the title from its original "It's Only Money"; you can guess why). Frank and Jane sing "Kisses And Tears."
* 1:30 a.m. -- "Young Widow" (1946). Jane plays a young journalist who tries to get over the loss of her husband in World War II. She's earnest in this low-key drama, but a bit overwhelmed at this stage of her career. 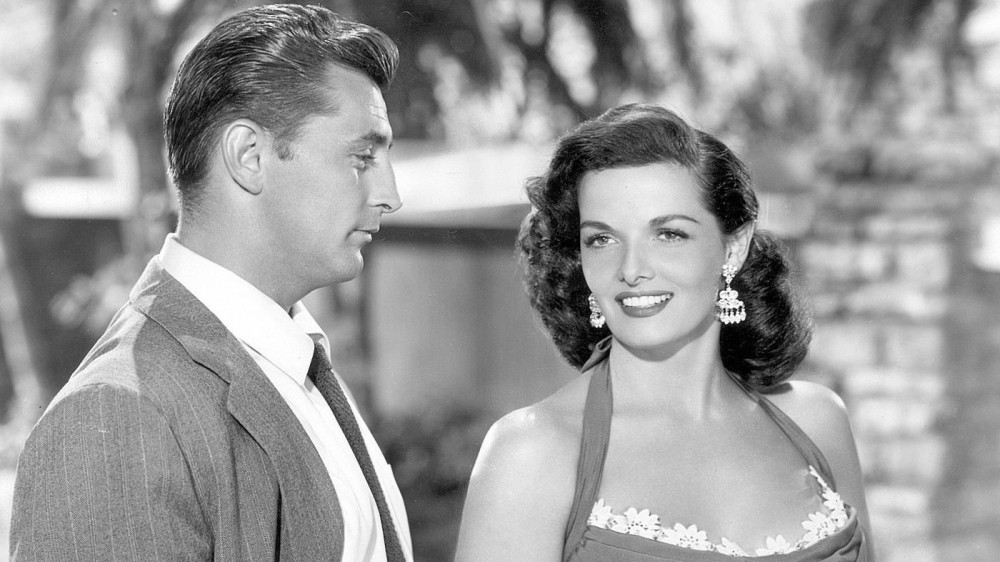 April 13
* 8 p.m. -- "His Kind Of Woman" (1951). The first of two teamings of Russell and iconoclast Robert Mitchum -- two contrasting personalities who nonetheless became close friends -- this film noir with comedic elements, finished in May 1950, has become a cult favorite over the years. Vincent Price (as a ham actor) and Raymond Burr (as a Lucky Luciano-type mobster) add to the fun.
10:15 p.m. -- "Macao" (1952). This weird Russell-Mitchum film was also made in 1950 but held up, another victim of Hughes' bizarre ownership of RKO. Josef von Sternberg, its initial director, was soon dismissed and replaced by Nicholas Ray. His soon-to-be ex, Gloria Grahame, and William Bendix round out the cast. I personally prefer this to "His Kind Of Woman" (you'll learn why later). A wonderful essay on Russell and Mitchum is at https://www.facebook.com/search/top/?q=jody%20lynn%20jane%20russell%20&epa=SEARCH_BOX.
* midnight -- "The Las Vegas Story" (1952). This uneven paean to Hughes' later residence (where he owned several casinos) stars Russell, Vincent Price, Victor Mature and Hoagy Carmichael. Jane and Hoagy team for his standard "I Get Along Without You Very Well."
* 1:45 a.m. -- "Montana Belle" (1952). Made for Republic in 1948 after "The Paleface," Russell here plays western legend Belle Starr, directed by Allan Dwan (27 years after he helmed Jane Alice Peters' film debut in "A Perfect Crime"). He encouraged Russell to sing on screen for the first time, and those scenes are the most effective in the film. 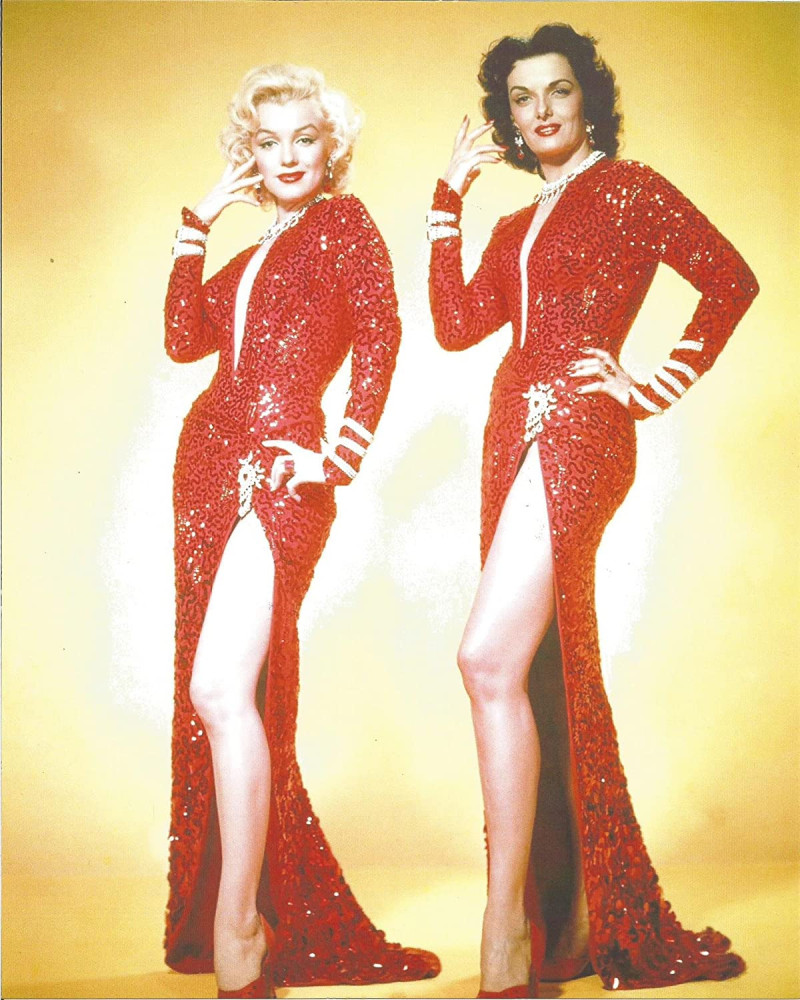 April 20
* 8 p.m. -- "Gentlemen Prefer Blondes" (1953). Two icons of mid-century American sexuality, Marilyn Monroe and Russell, light up the screen in this re-telling of the Anita Loos tale. It's directed by Hawks in uncharacteristic (for him) Technicolor splendor, and Charles Coburn has a fine supporting role as a diamond mogul.
* 10 p.m. -- "Gentlemen Marry Brunettes" (1955). Russell co-produced this splashy if inconsistent musical filmed in England, although the best reviews went to Jeanne Crain (whose singing was dubbed by Anita Ellis). Also in the cast are Alan Young and Rudy Vallee.
* midnight -- "The French Line" (1954). Controversial in its day for its gaudy celebration of Jane's buxom figure -- this also was filmed in 3-D, though TCM is airing the "flat" version -- has its moments, simply not enough of them. It received a condemned rating from the Legion of Decency, and was denied a Production Code Seal.
* 2 a.m. -- "The Revolt Of Mamie Stover" (1956). Jane portrays a prostitute forced to flee San Francisco. Co-starring Richard Egan, Joan Leslie and Agnes Moorehead.
* 3:45 a.m. -- "The Fuzzy Pink Nightgown" (1957). Jane dons a blonde wig to play an actress who's kidnapped, but believes it a publicity stunt. The film, her last as a lead, lost money. Directed by Norman Taurog ("We're Not Dressing"), co-starring Una Merkel and Adolphe Menjou.

April 27
* 8 p.m. -- "Foxfire" (1955). Set in modern-day Arizona, Russell (shown with Mara Corday) plays a white woman with a half-Apache husband (Jeff Chandler) whose excavation project of an Apache treasure leads to problems. With Barton McLane.
* 10 p.m. -- "Hot Blood" (1956). Nicholas Ray directed Russell (making her fifth film in 13 months) in this tale of gypsies. With Cornel Wilde, Luther Adler and Joseph Calleia.
* 11:45 p.m. -- "Underwater!" (1955). Russell's last film for Hughes, this time Howard sought to promote scuba gear. Jane plays the wife of skin diver Richard Egan (do we see her in swimsuits? Of course!), as they and fortune hunter Gilbert Roland pursue buried treasure. Its world premiere was held underwater in Florida, as critics either donned scuba suits or watched from inside one of six submarines.
* 1:45 a.m. -- "The Born Losers" (1967). Jane Russell meets Billy Jack (Tom Laughlin) in this early motorcycle pic that made quite a bit of money for American International Pictures. Her character is a rape victim.

To close, a sample of Russell's underrated singing, from the aforementioned "Macao." It's Jane's fine version of the perennial "One For My Baby (And One More For The Road)."