Our world was so different when this month started, wasn't it? We could watch movies in theaters, follow our favorite sports teams on TV, go to our jobs (assuming we had one). Now, as a result of something barely visible in the U.S. on March 1, it seems so long ago.

Coronavirus has isolated America, and the globe. If we're wise, we practice something called "social distancing" (who among us used that term on the evening of Feb. 29?) and rarely leave home unless buying groceries or visiting the pharmacy. Your favorite TV series may have a new episode or two left before production was shut down, and all sports activity has ground to a halt. And dine in at a restaurant? Forget it.

How long will this period of inactivity last? When will we return to a semblance of "normal"? That's up for the fates to decide. We're in the 21st-century version of 1918-1919. Fortunately, you can make your own meals at home (or get carry-out or delivery). And if you'd like to add some Los Angeles flair to your food, you can do that, too.

Since Carole & Co. began nearly 13 years ago, we've run a number of recipes from Lombard (from all accounts a capable cook) and others with ties to classic Hollywood. Today, we'll reprint a few and add a link to several more. 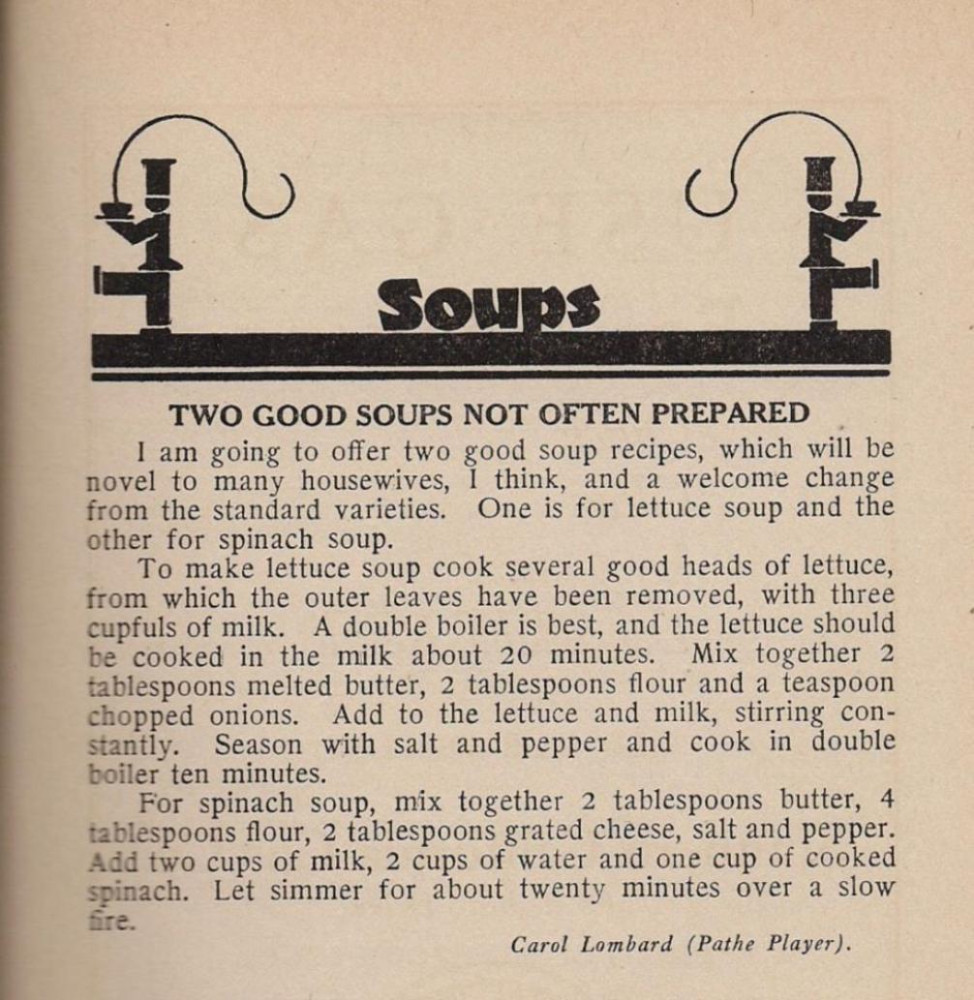 We'll start with one of my favorites -- spinach soup a la Lombard. This, as well as a recipe for lettuce soup, comes from a 1929 cookbook by the Beverly Hills Woman's Club (hence the reference to "Carol Lombard, Pathe Player"), and it's simply delicious. Easy to prepare, too. 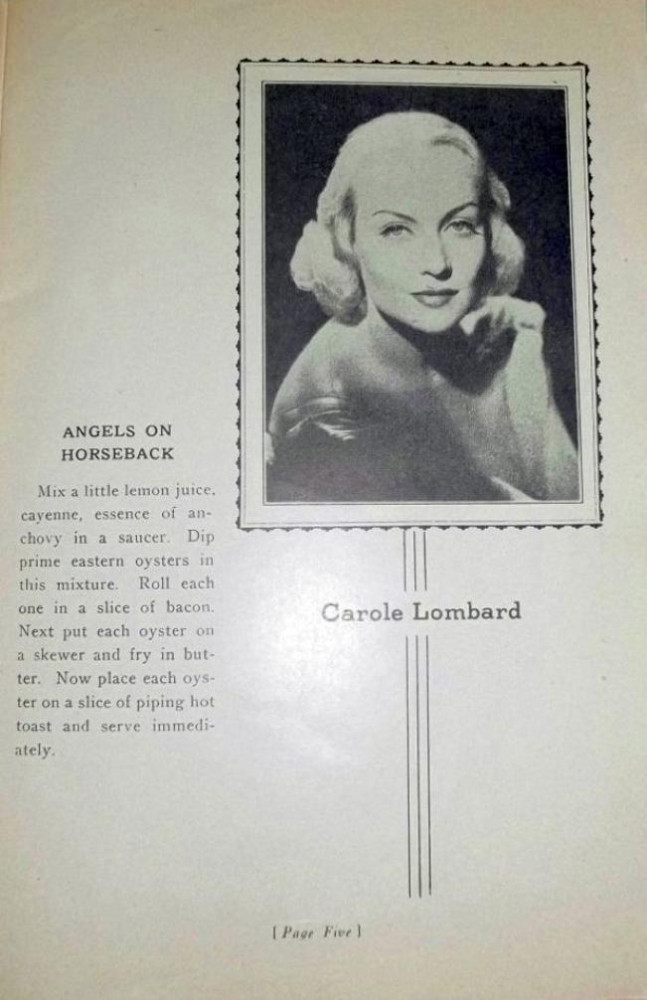 This mid-'30s recipe, with the offbeat title "angels on horseback," probably makes a good party appetizer...but since parties now are verboten, it's likely something you should save for when society gives the "all clear" signal. 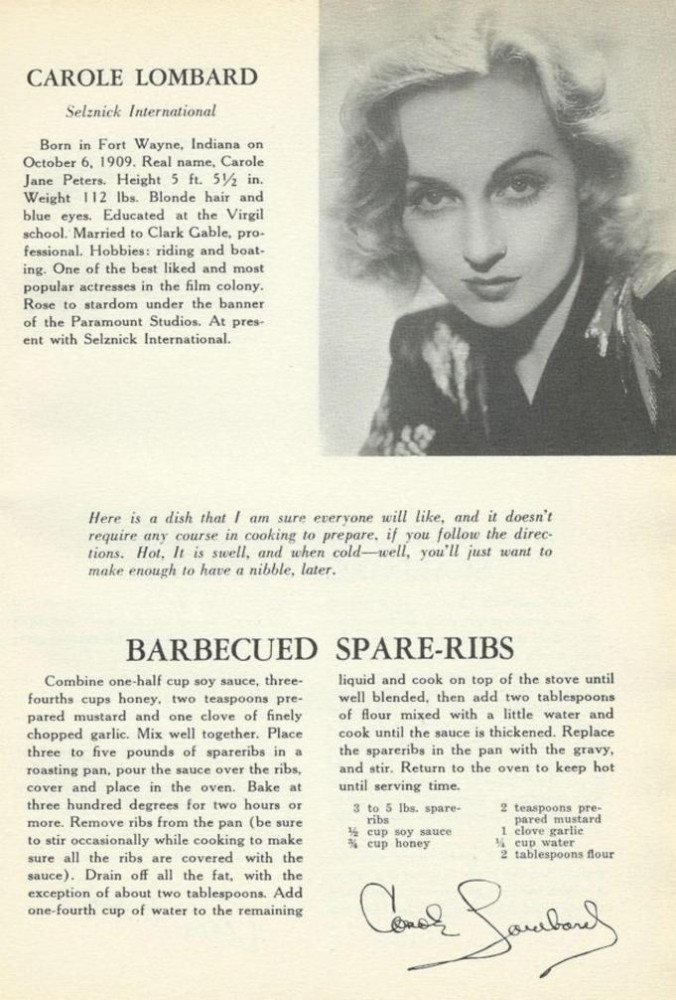 We can pinpoint when this Lombard recipe ran: The spring of 1939, soon after she'd married Clark Gable and when she was still associated with Selznick International. (Carole soon would sign with RKO.) A tasty main course -- though if you have Catholics in your household, don't serve it on Fridays until after Lent -- and it apparently makes for good leftovers, too.

How about this recipe for something called "chicken mousse"? 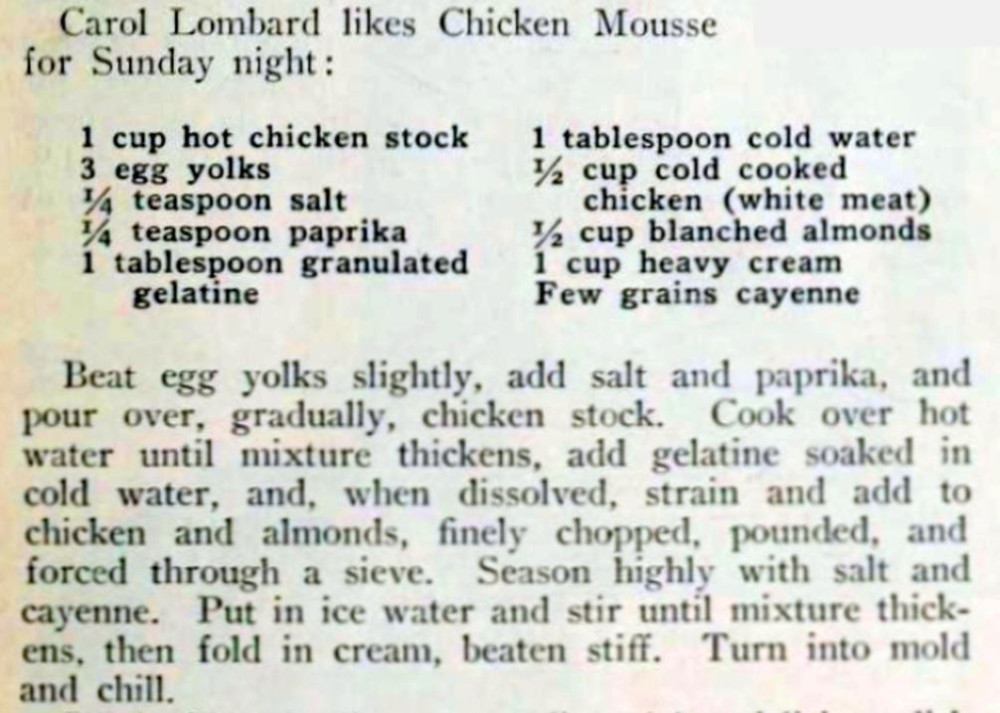 A piece at the site LAist inspired this entry -- "Classic LA Recipes For Your Quarantine Cooking Needs" (https://laist.com/2020/03/31/classic_la_recipes_quarantine_cooking_cuisine.php). It includes such perennials as Chasen's chili and Cobb salad, as well as paprika chicken.

Enjoy while you're cooped up!
Collapse