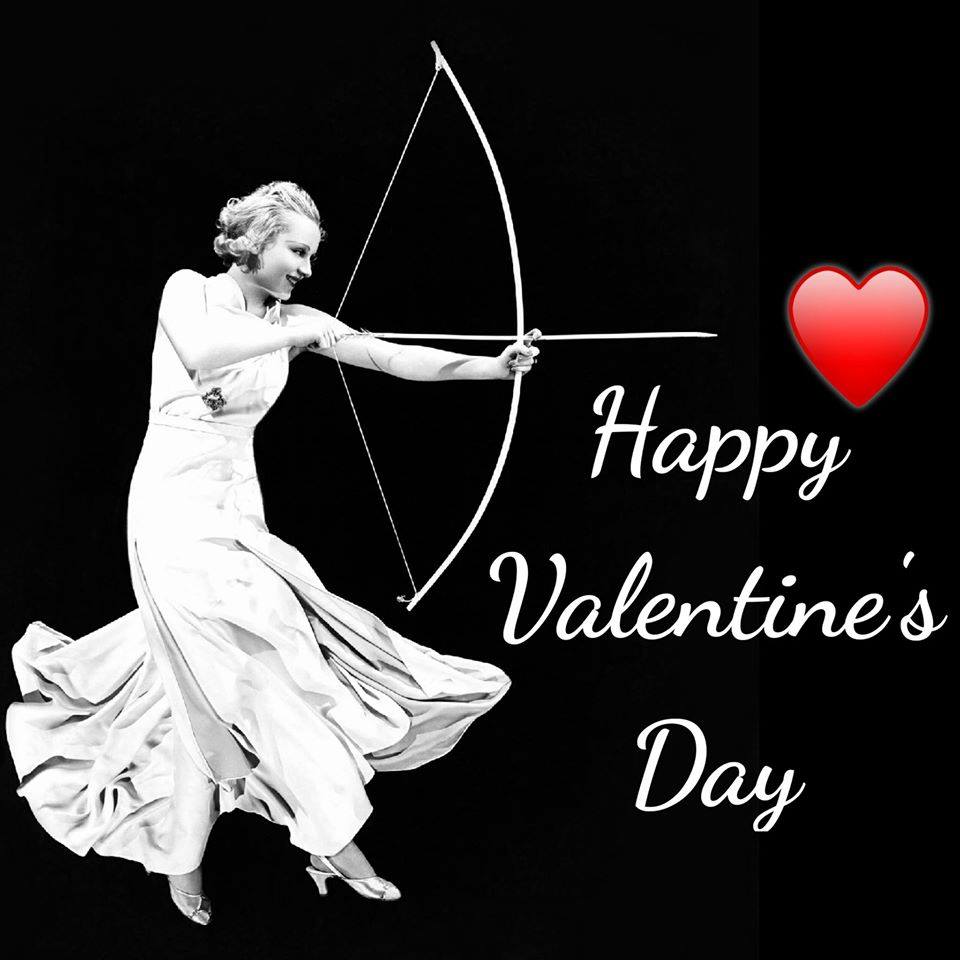 Step aside, Geena Davis, and let Carole Lombard fire her bow and arrow in our tribute to Valentine's Day. Hope you are having a good day; I'm certain these two people are: 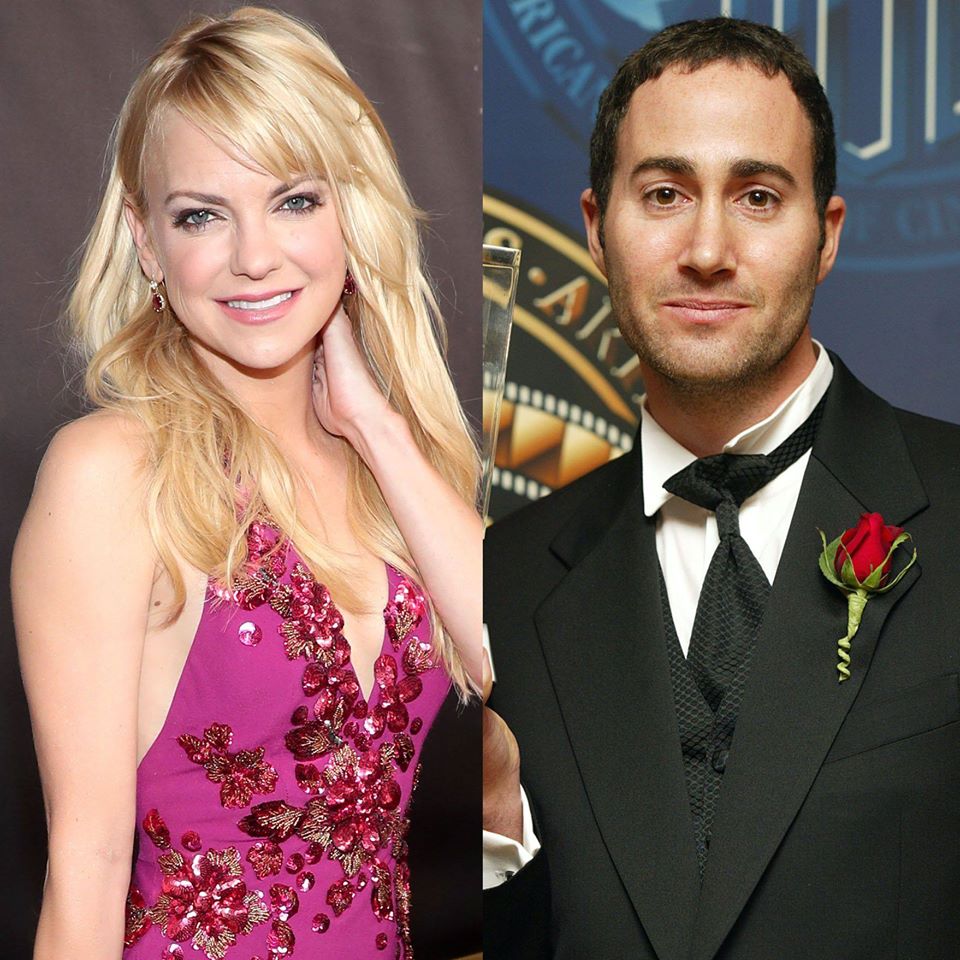 At left, one of my favorite actresses, Anna Faris. (She has been one for some time, https://carole-and-co.livejournal.com/260680.html.) Faris, 43, and Allison Janney head the terrific ensemble of my favorite sitcom, "Mom." Anna continues the comic tradition of Lombard and Goldie Hawn in being smart, beautiful and talented. (In fact, two years ago Anna starred in a gender-swapped remake of the 1987 Hawn hit "Overboard.") At right, the lucky groom-to-be, Michael Barrett. Here's a recent shot of them together: 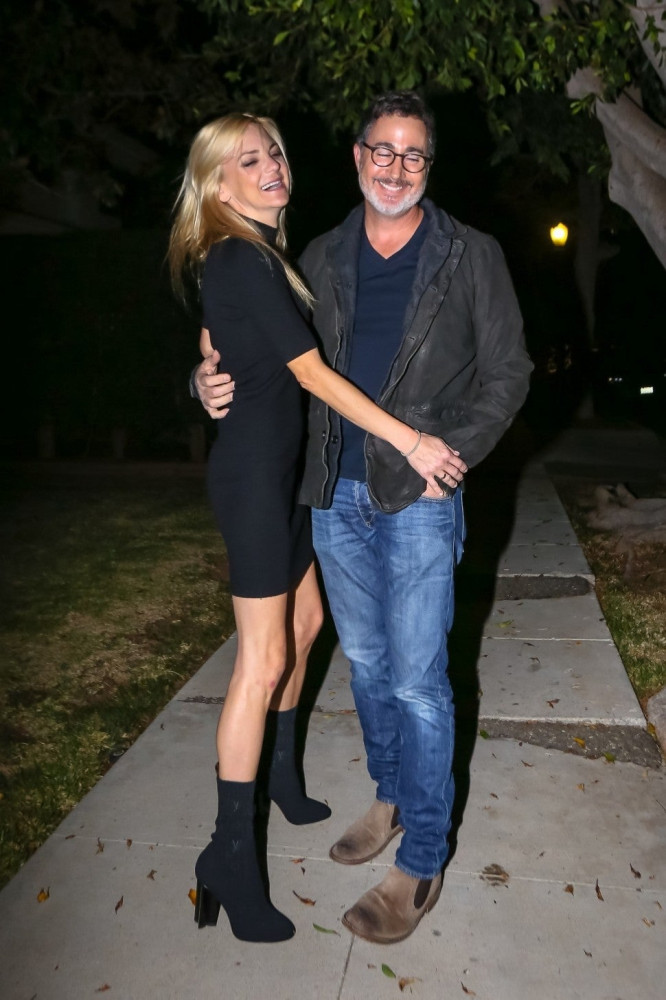 Barrett's in entertainment too. Unlike Anna's first two husbands, Ben Indra (2004-2008) and Chris Pratt (2009-2017; the couple's separation was amicable and they share custody of son Jack, 7), he's not an actor but a cinematographer. He and Faris met on the set of "Overboard"; his other credits include "Ted" and "Kiss Kiss Bang Bang," showing similar success in the industry. I think we know who'll handle cinematography on her films for the foreseeable future. 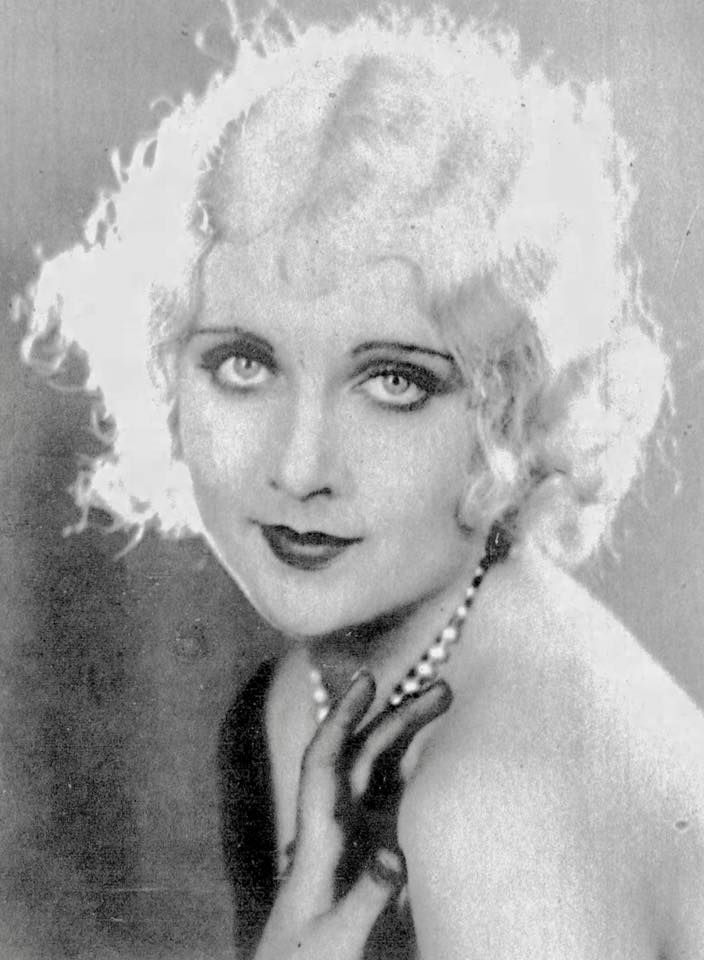 As far as I know, Lombard was never romantically involved with any of her cinematographers, but in the months following her 1926 automobile accident that caused some cosmetic damage to her face and jeopardized her career, she studied that craft, as well as lighting -- anything to give her an edge in her return to the business.

It gave her plenty of knowledge about the insides of the industry, and such knowledge paid off big-time in the spring of 1930 when Carole arrived at Paramount, a top-of-the-line studio. A few years later, on loanout to Columbia, she would meet a cinematographer who was the son of a race-car driver and Hollywood stuntman. 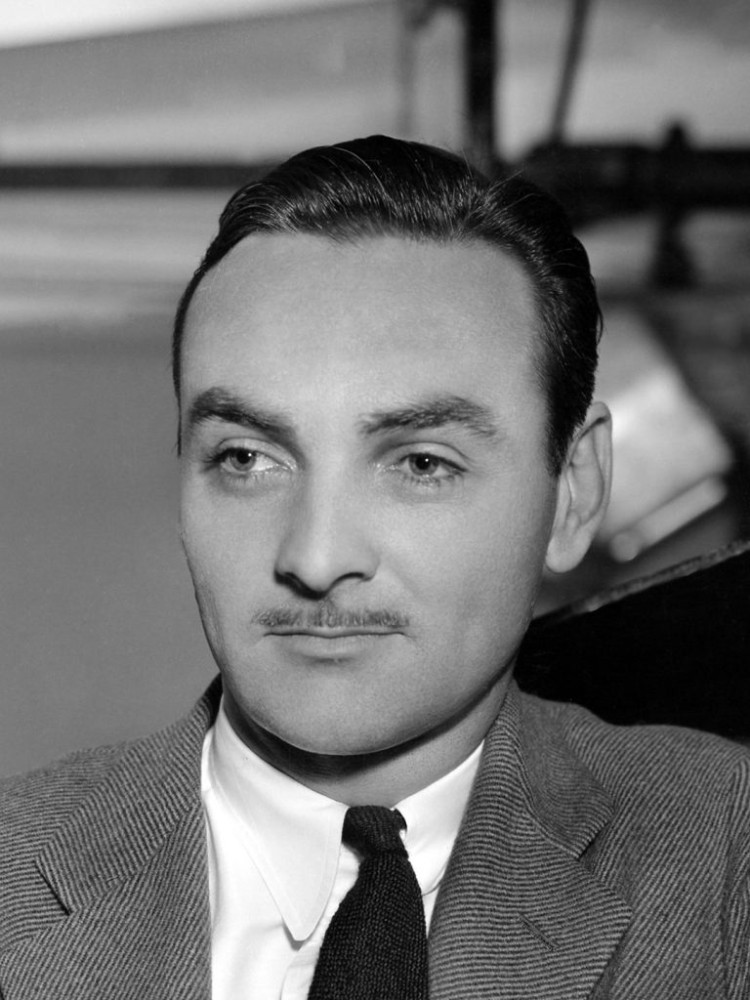 Ted Tetzlaff Jr., a native Angeleno born in 1903, entered cinematography in 1926, eventually settling in at Columbia. His films there included "Three Wise Girls" with Jean Harlow in 1932. The following year, he was assigned to Carole's third film for Harry Cohn's studio: 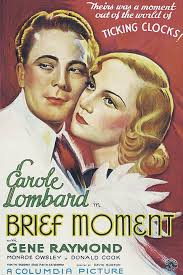 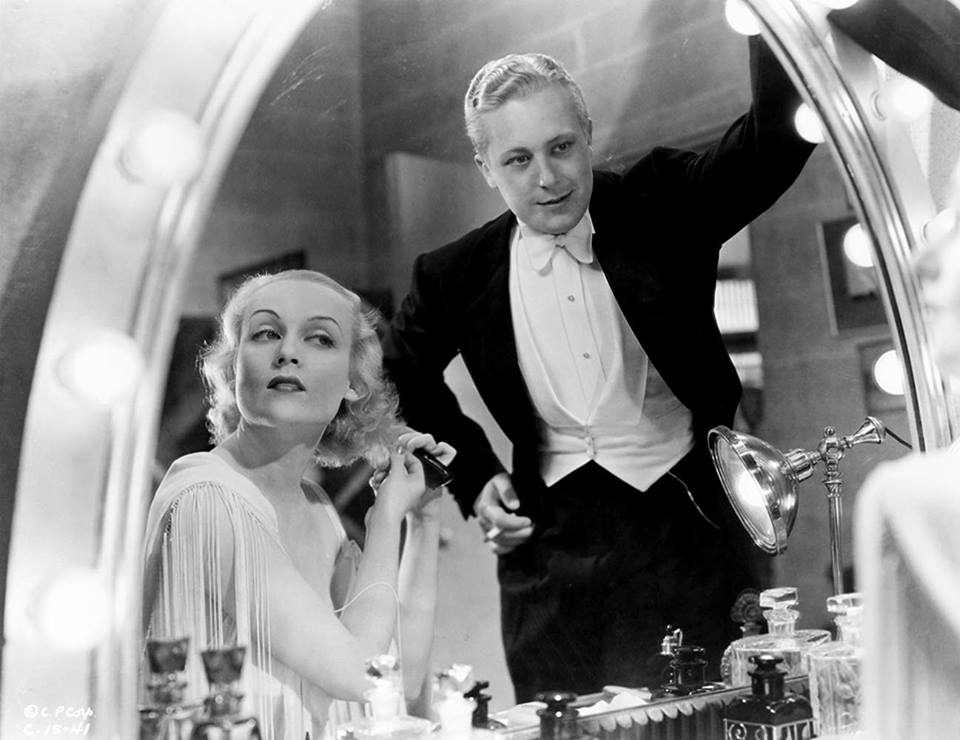 "Brief Moment." Incidentally, its pressbook included this item on Lombard and cinematic jargon:

Ted wasn't high enough in the Columbia hierarchy to be assigned to her next film there, "Twentieth Century," but when she returned to Gower Gulch to make "Lady By Choice" in the fall of 1934, Tetzlaff worked with her again.

Before '34 ended, he moved to Paramount, and his second film there was Carole's second dance collaboration with George Raft, "Rumba." Five of his next 10 assignments would be for Lombard films, including two she filmed at Universal -- "Love Before Breakfast" and "My Man Godfrey." (And yes, he's included in those iconic Streamline Moderne "Godfrey" opening credits.) 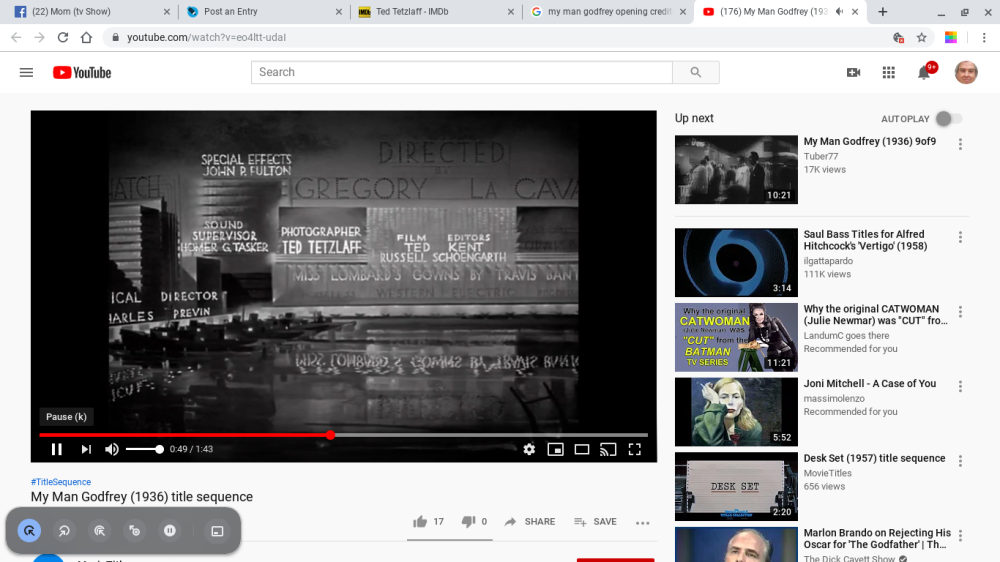 One of his goals was to photograph Lombard as well as possible, something that led to a major shakeup on one of her films. Return with us now to early 1936, when Raft was to co-star with Carole in a project titled "Concertina." George complained she was getting beneficial camera treatment; he walked off the set, replaced by Fred MacMurray, and the movie was renamed "The Princess Comes Across" (https://carole-and-co.livejournal.com/166158.html).

We have a photo of Tetzlaff alongside director Mitchell Leisen as they watch Lombard and MacMurray go through their paces in "Swing High, Swing Low": 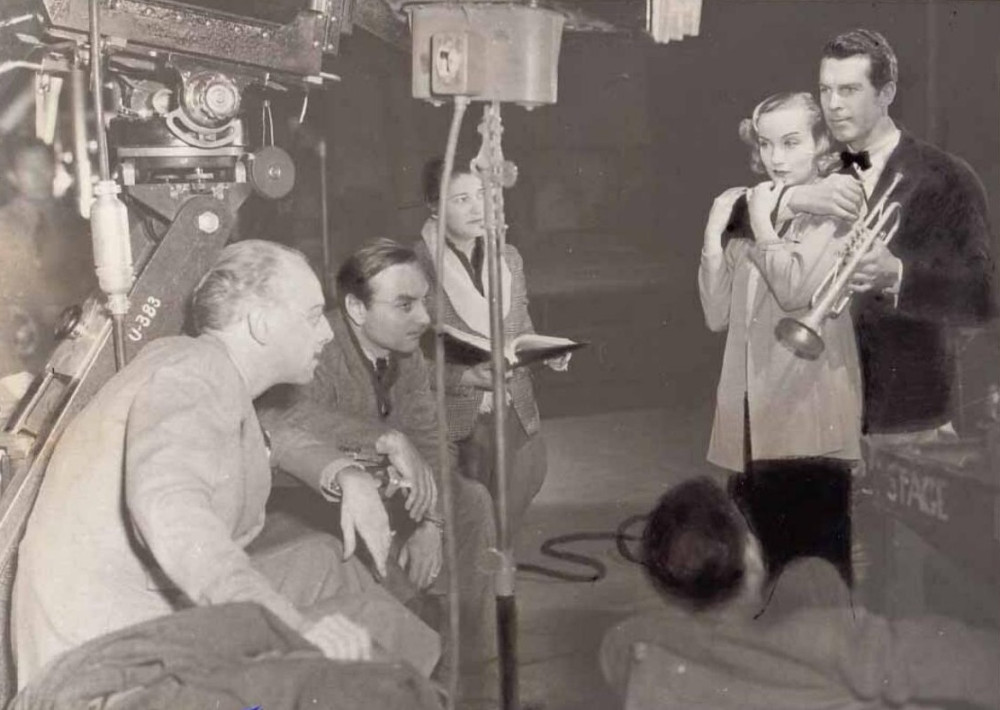 All told, Lombard and Tetzlaff teamed 10 times, the last at her Warners disaster "Fools For Scandal." Not that she blamed him for that fiasco; as she later said of the film, "I knew 'Fools For Scandal' was a flop when my friends confined their comments to how beautifully I had been photographed."

Shed no tears for him, though. His later assignments included "Remember The Night" (1940) with MacMurray and Barbara Stanwyck; "I Married A Witch" (1942) with Veronica Lake; the wartime comedy "The More The Merrier" (1943); and an Alfred Hitchcock classic, "Notorious" (1946).

From there, Tetzlaff moved into directing, many of them crime dramas (two starring Raft), as well as the 1955 adventure "Son Of Sinbad."

He lived until January 1995, and Lombard must've made a good impression on him. Look at this page from the 1940 U.S. Census: 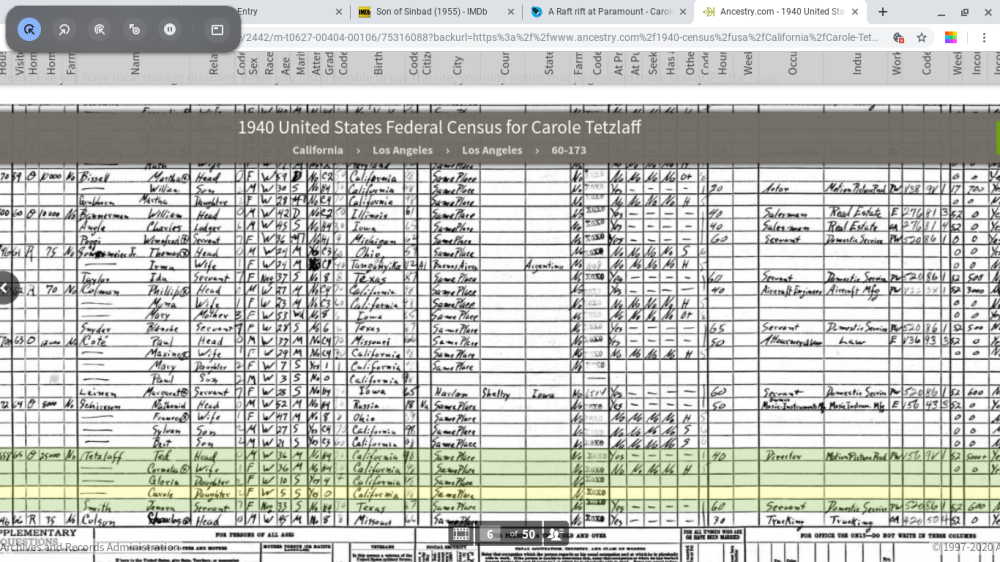 May Anna and Michael have a long and fruitful marriage, with plenty of ethereal closeups.
Collapse