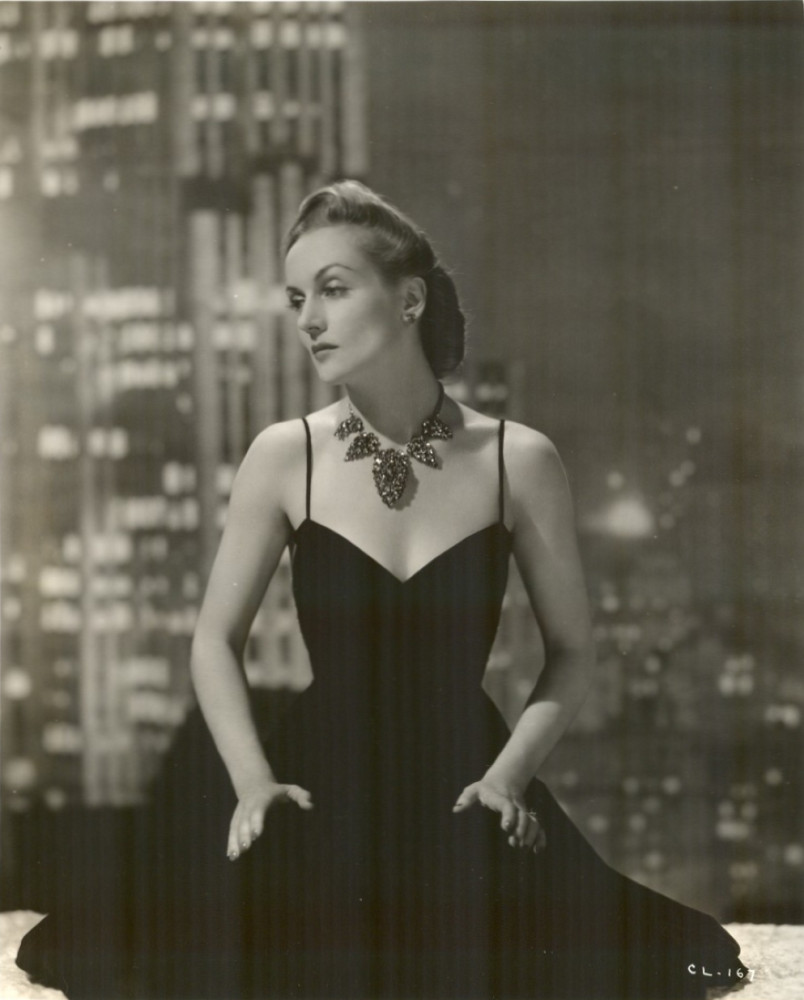 I wanted to find a photo of Carole Lombard with the moon to commemorate today's 50th anniversary of the first humans setting foot on the lunar surface, but this is the best I could come up with -- an RKO publicity still of her "Mr. & Mrs. Smith" character, where Ann Smith presumably can see the moon from her Manhattan rooftop if conditions are right.

But that will have to do for a lead-in, as we look back to that momentous day of July 20, 1969...actually, newspapers from the following day. First, the Los Angeles Herald-Examiner: The Washington Daily News, which like the Herald-Examiner is no longer with us: 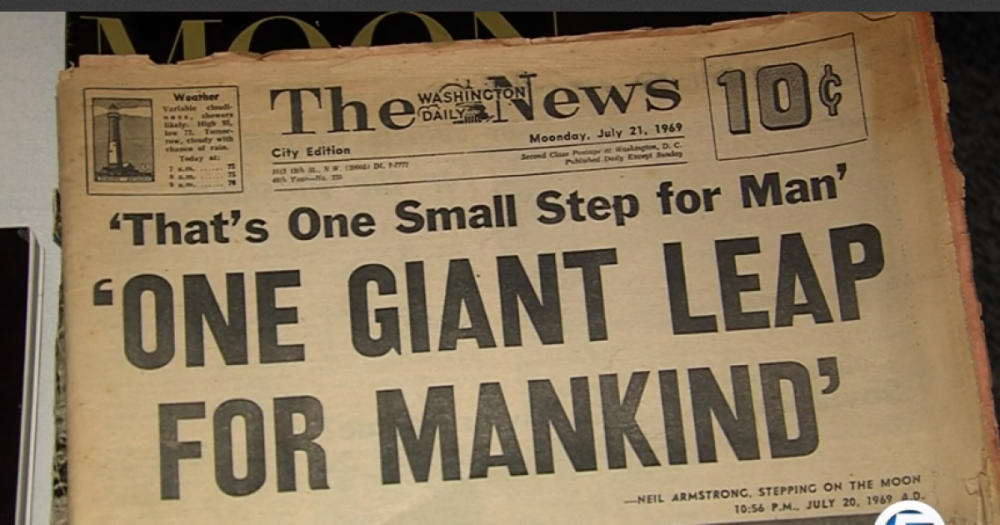 Another tabloid, the still-surviving Chicago Sun-Times, a few years after Roger Ebert had joined the staff: 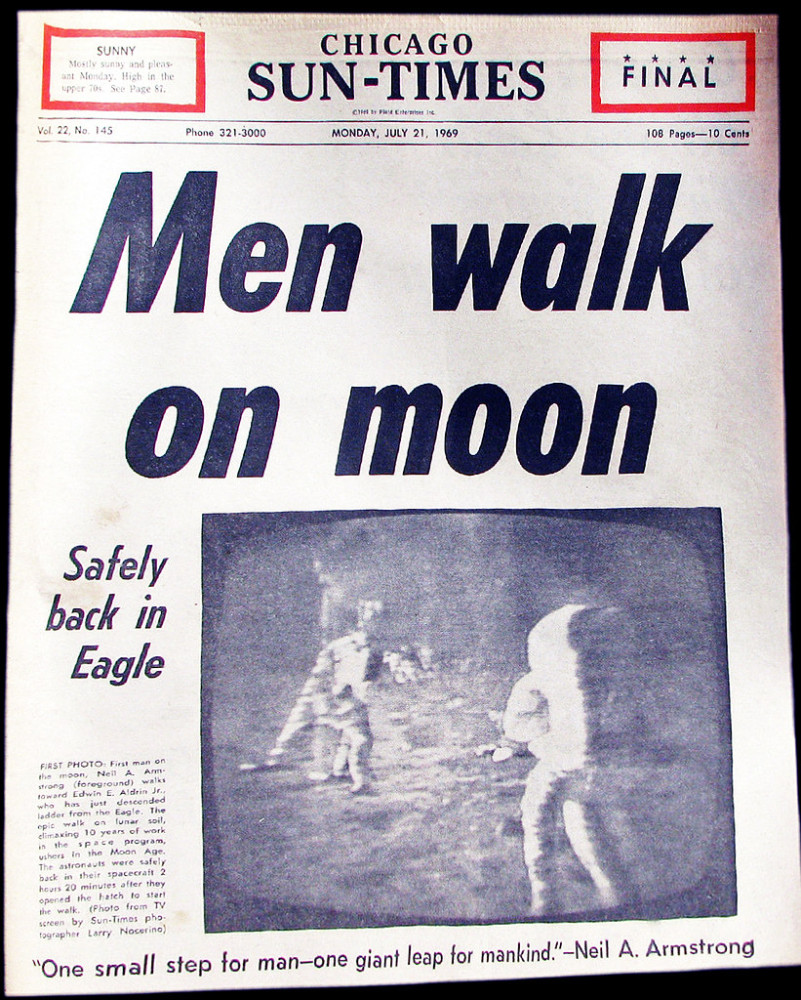 And finally, the Post-Standard in my hometown of Syracuse, N.Y., where I was less than a month away from turning 14: 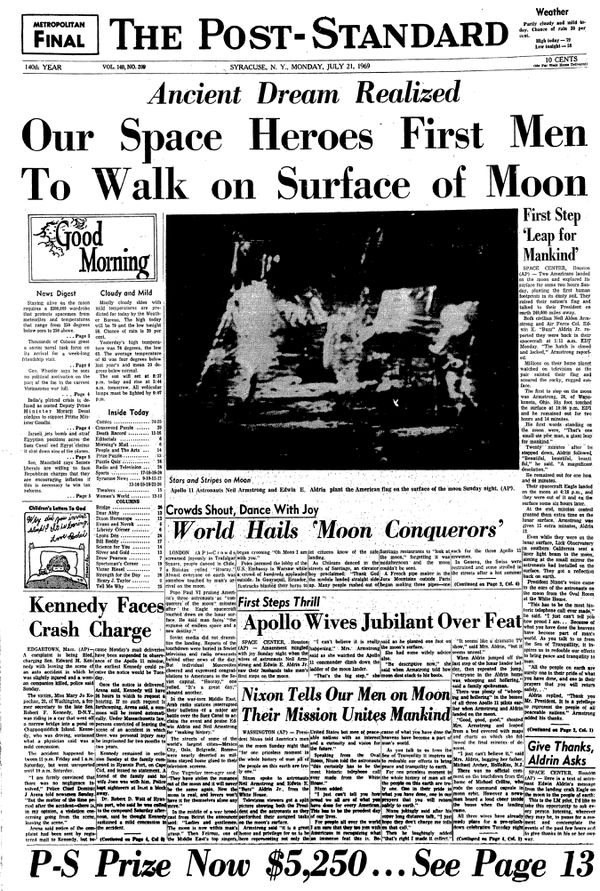 Given the partisanship and echo-chamber nature of today's media -- where your politics can be compartmentalized by whether you get your television news from MSNBC, CNN or Fox News Channel, going ideologically from left to right -- the 1969 broadcast landscape looks rather quaint today. Three TV networks, none with any ideological ax to grind. No 24-hour news cycle, just a trio of half-hour nightly newscasts and some public affairs programming.

Mine was a CBS family, where Walter Cronkite was a knowledgeable, reassuring presence on its space coverage. So it was on this Sunday night, as we watched Neil Armstrong set foot on the moon a few minutes before 11 p.m. (Eastern). The second man to set foot, Buzz Aldrin, is shown with an American flag: 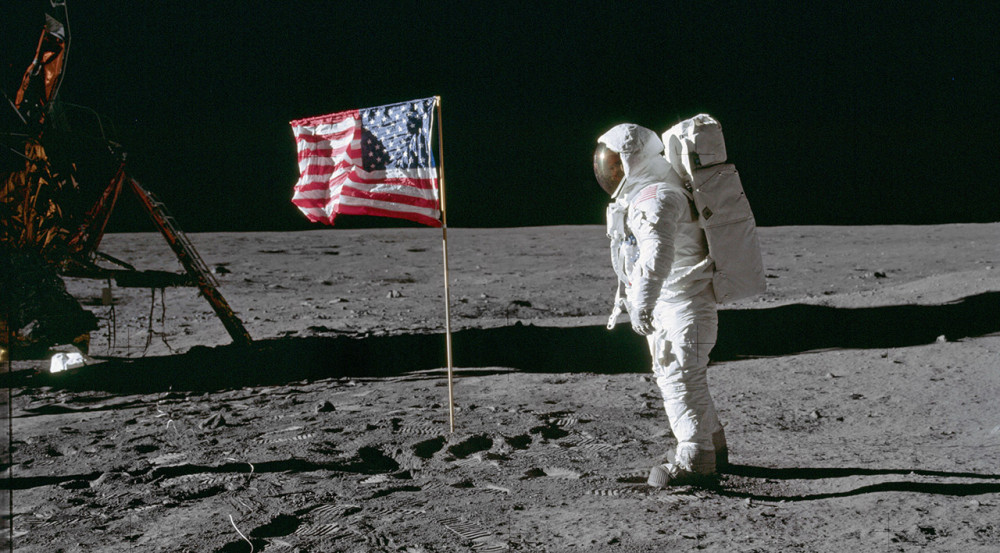 Earlier that Sunday, ballgames were affected by the news, just as they had been a quarter-century before for D-Day. When Apollo 11 touched down on the lunar surface at 4:17 p.m., it was in the top of the eighth of a 2-2 game at Yankee Stadium against the Washington Senators (remember when D.C. was in the American League, folks?). The game paused for four minutes to celebrate the safe landing, actions repeated elsewhere throughout the majors (https://www.washingtonpost.com/sports/2019/07/17/when-apollo-landed-moon-major-league-baseball-stood-still/?utm_term=.e11710f3792e). 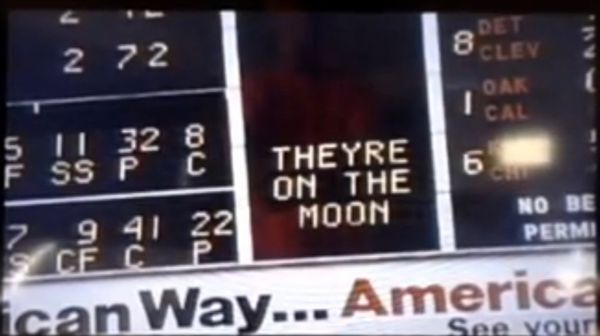 Carole would have been 60 at the time of Apollo 11 (her first husband, the long-retired William Powell, was slightly more than a week away from turning 77). Like all of us at the time, living in a far more united environment, I'm sure she would have celebrated the achievement.

One suburban Syracuse family had a personal tie-in to the mission, as the mother in the household was a high school classmate of Aldrin's: 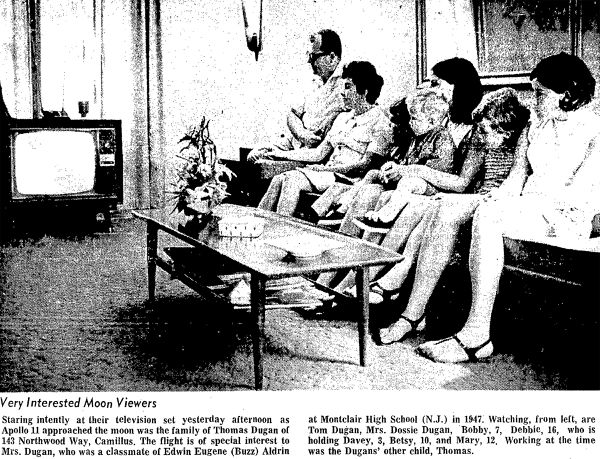 A few weeks after the mission, a Syracuse-area apartment complex celebrated by giving those who toured it a commemorative record: 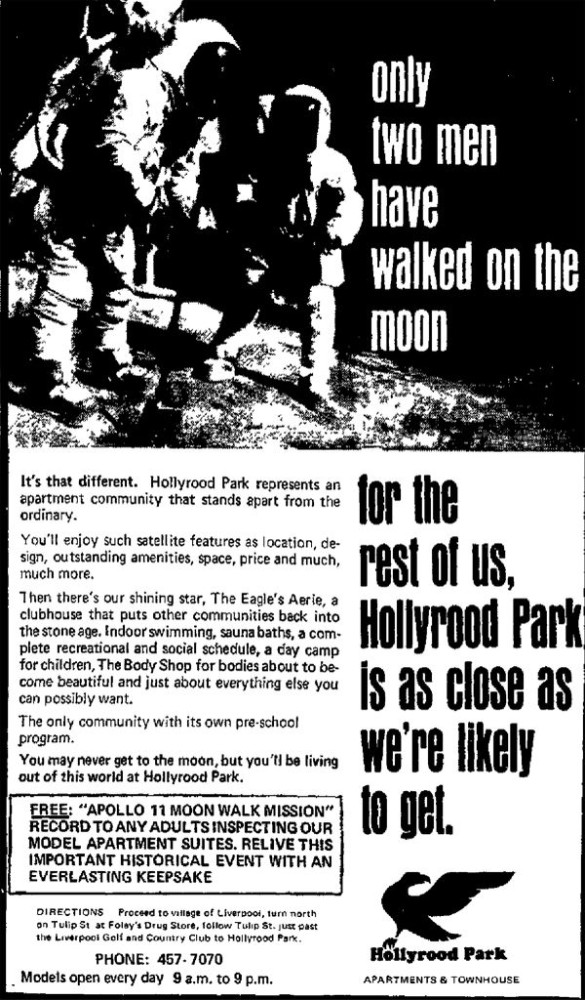 It turns out we do have a Lombard lunar "tie-in," but it's aural, not visual. On Feb. 10, 1941, Carole and James Stewart were the leads in a "Lux Radio Theater" adaptation of "The Moon's Our Home," a 1935 comedy starring Stewart's friend Henry Fonda and his ex-wife Margaret Sullavan. A website devoted to Stewart's considerable radio career did an entry on this broadcast (http://www.jimmystewartontheair.com/lux-radio-theatre-the-moons-our-home/), including copies of contracts MGM player Stewart had to sign in order to appear on "Lux" and links to each of its three acts.