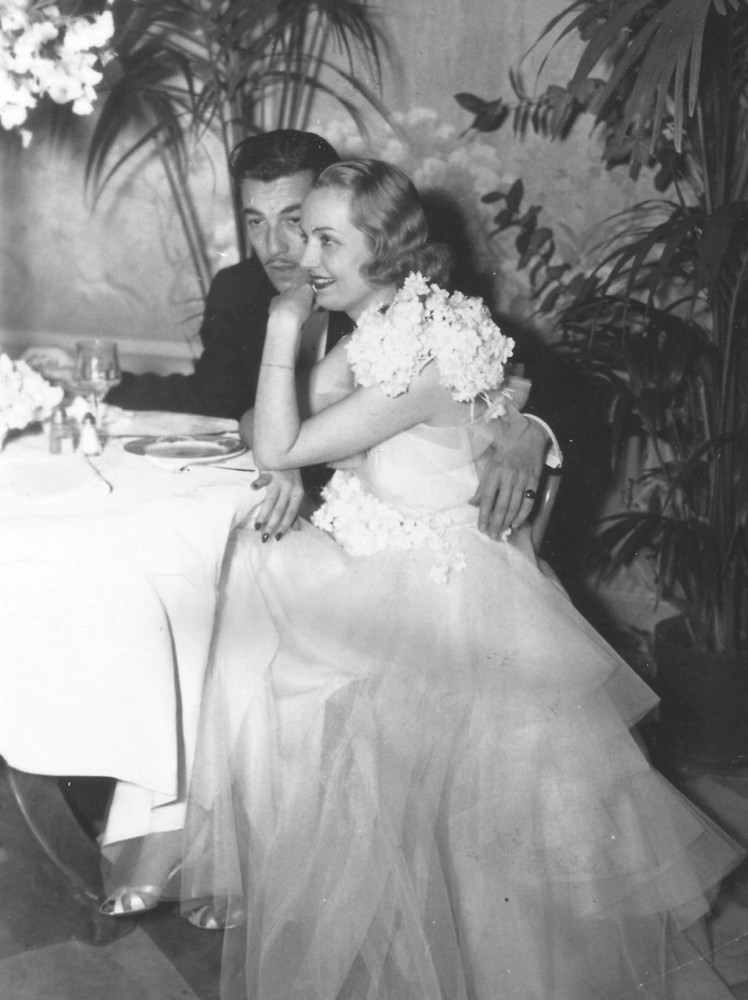 Carole Lombard and "date" Cesar Romero enjoy the White Mayfair Ball in early 1936, the event that legend has it ignited the romance between Carole and Clark Gable. (They'd seen each other at several functions after making "No Man Of Her Own" in late 1932 without being perceived as an "item.")

That's probably what comes to mind when you link the word "Mayfair" with Lombard, but truth be told, she had been part of the Mayfair Club -- and it indeed was a club -- for several years. Here's some background on the organization: 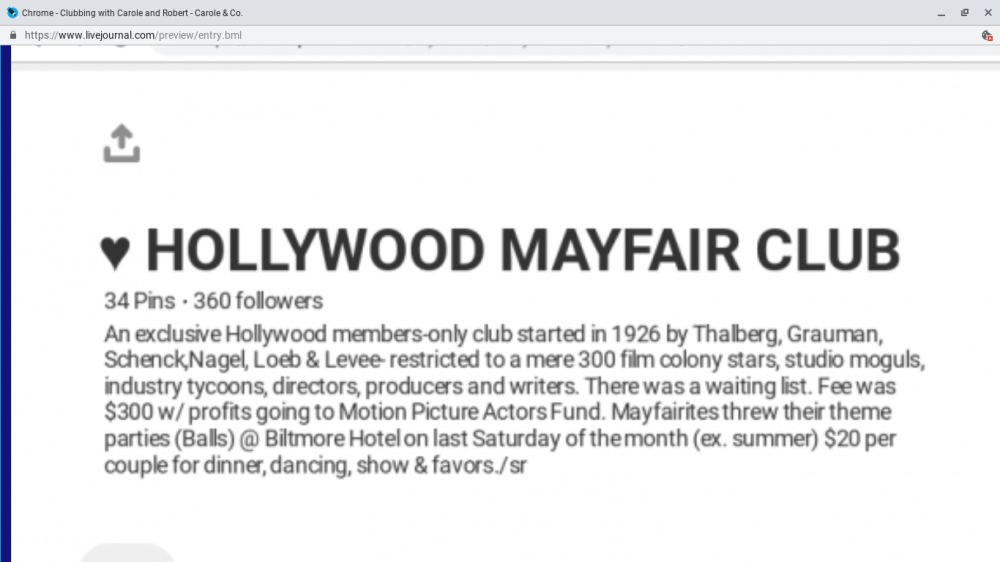 From the names of the founders, I'm guessing the reluctance of Los Angeles society to mingle with the largely Jewish Hollywood hierarchy had a lot to do with the Mayfair's birth. As Lombard's stature rose in the industry, her personality made her an obvious candidate to join the exclusive group.

After the death of Russ Columbo in September 1934, Carole briefly retreated from the social whirl, but by December she was back -- and this photograph proves it: 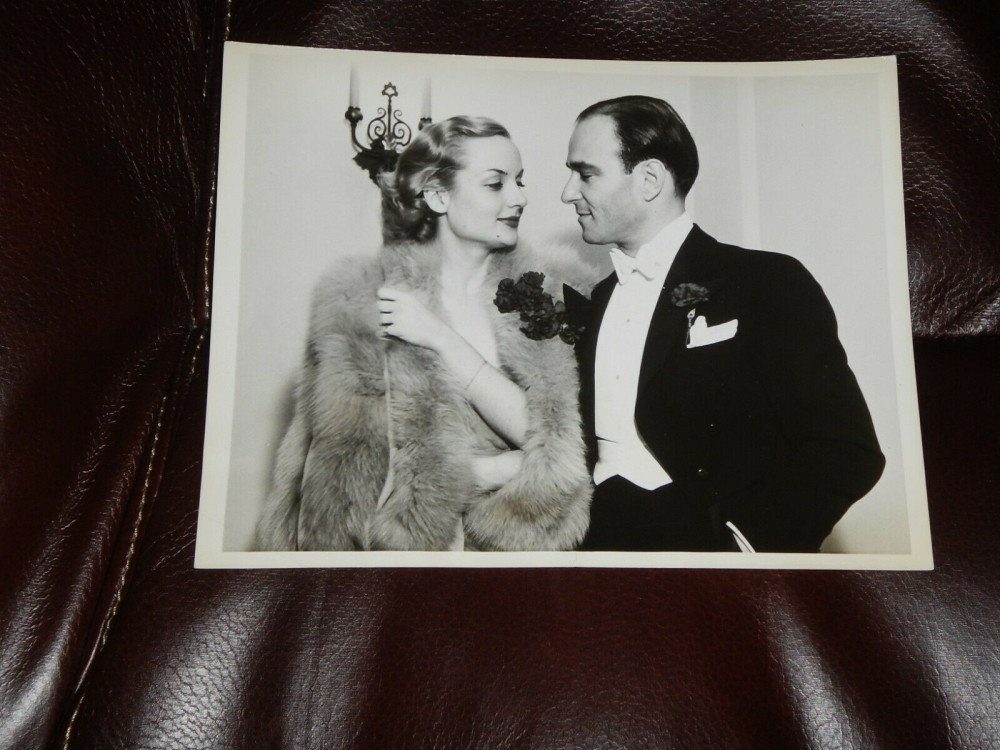 Lombard's shown with screenwriter Robert Riskin; they were hardly strangers, as he had written her 1932 Columbia pre-Coder "Virtue." They may have been attracted to each other even then, as her marriage to William Powell was weakening. (He had been dating actress Glenda Farrell.) Riskin was riding high after writing the out-of-nowhere hit "It Happened One Night," the film credited as the catalyst for the screwball comedy genre, and would win an Academy Award for it the following spring.

The Lombard-Riskin relationship gradually waned, and he later found romance with another actress who loved writers, Fay Wray. (She'd previously been married to aviator and screenwriter John Monk Saunders.)

We know the pic is from a Mayfair function because of this on the back: 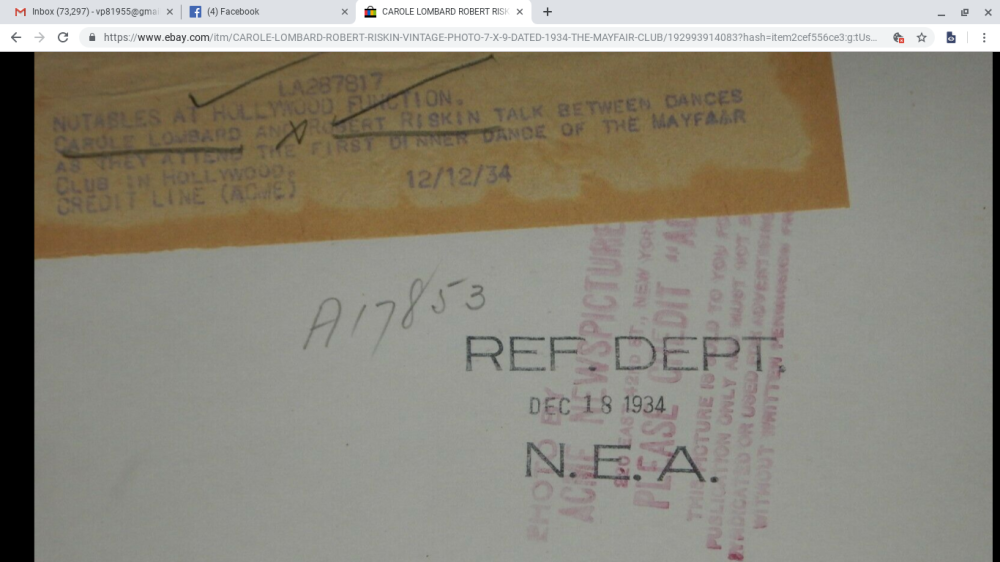 NOTABLE AT HOLLYWOOD FUNCTION
Carole Lombard and Robert Riskin talk between dances as they attend the first dinner dance of the Mayfair Club in Hollywood.

The photo is dated Dec. 12, 1934 and was received by the Newspaper Enterprise Association six days later. It measures 7" x 9" and is said to be in "very good" condition.