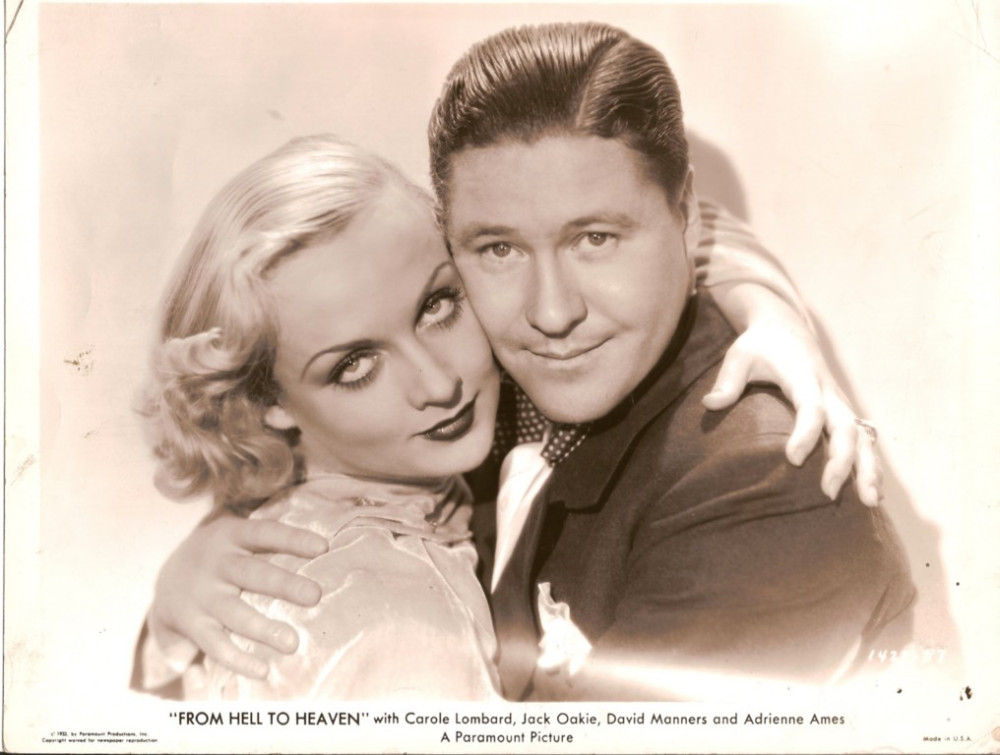 Jack Oakie made two films with Carole Lombard, "From Hell To Heaven" (from which a publicity still is shown) and "The Eagle And The Hawk" (like Cary Grant, he had no scenes with Carole). If Oakie's remembered today, it's for his turn as a Benito Mussolini type in Charlie Chaplin's 1940 classic "The Great Dictator," but that doesn't do him justice. He was a reliable, versatile actor, most at home in comedy, and an integral player at Paramount for much of the 1930s.

He and Carole were likely friends, though I've never heard of any romance between them...but might he have made a third movie with her? That's what this photo, from the Wide World syndicate, would lead you to believe. 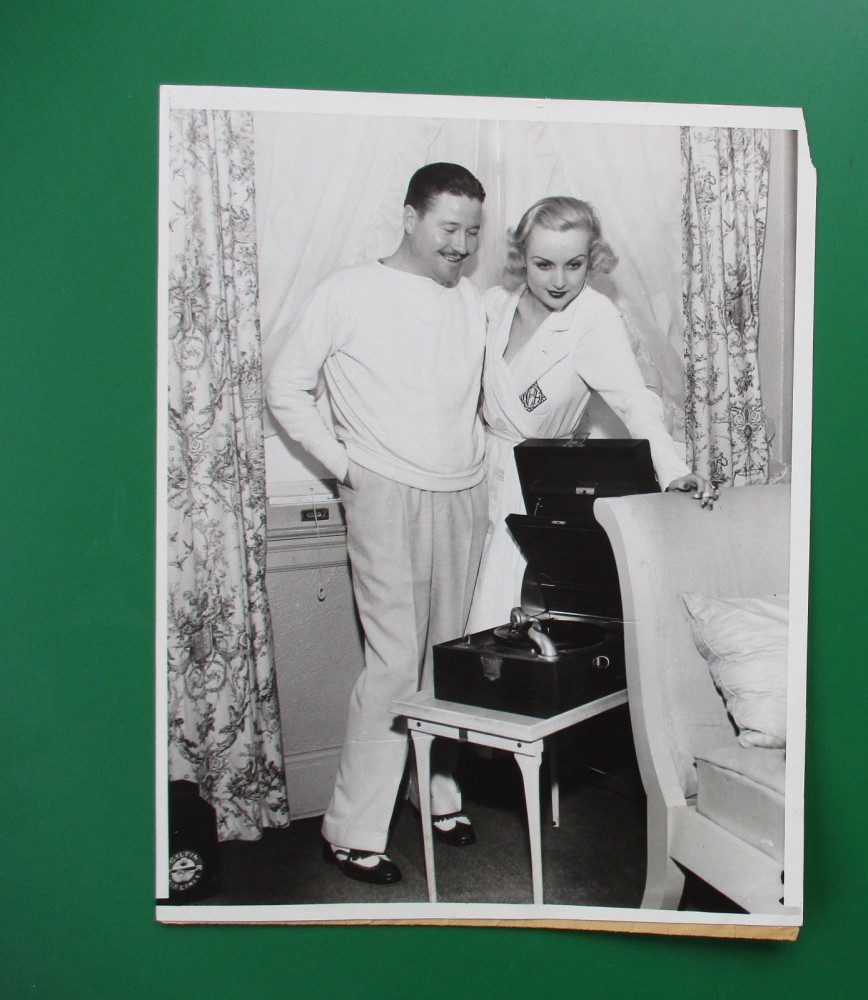 Yep, that's Oakie with a mustache, and it appears they are listening to a record (perhaps of fellow Paramount player Bing Crosby or another crooner, future Lombard lover Russ Columbo). From the back, we learn the photo is dated Aug. 25, 1933, a week after Carole had divorced William Powell in Nevada and returned to Hollywood following her necessary six weeks' residency in the Silver State: 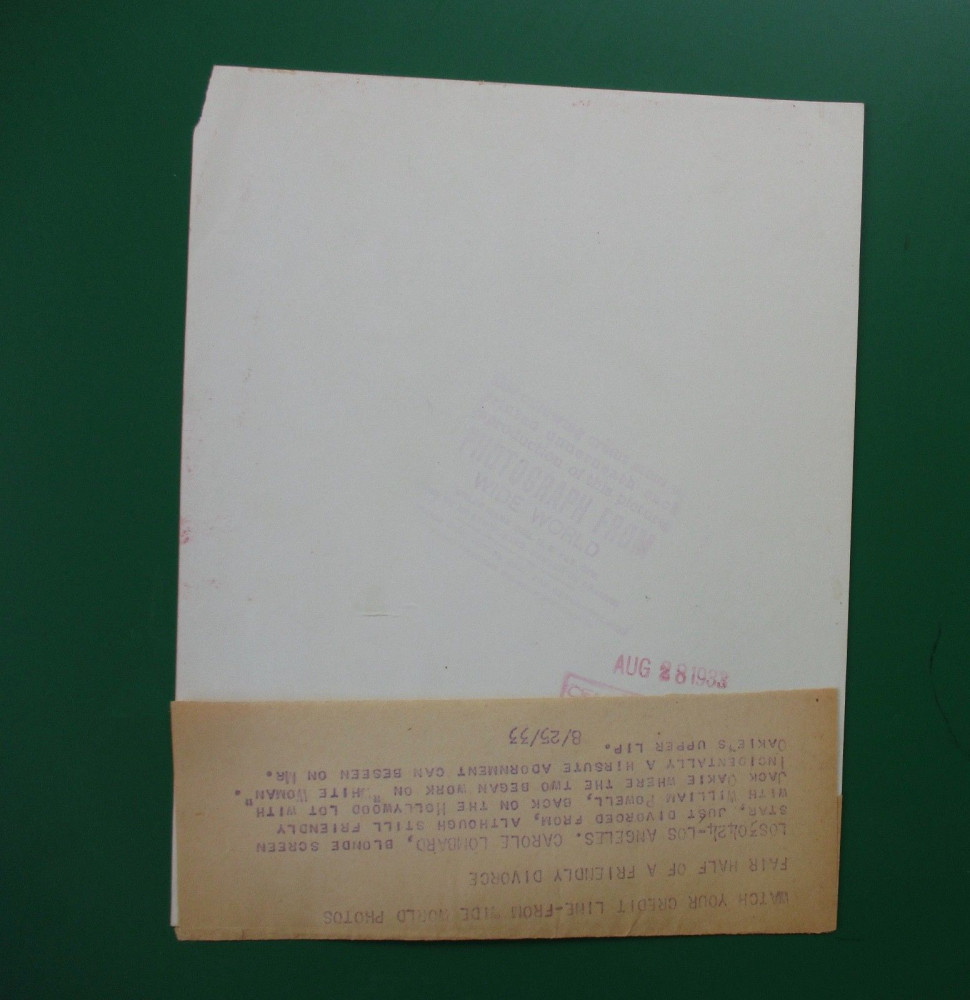 Can't read it since it's upside down? Here's an isolated close-up turned 180 degrees: 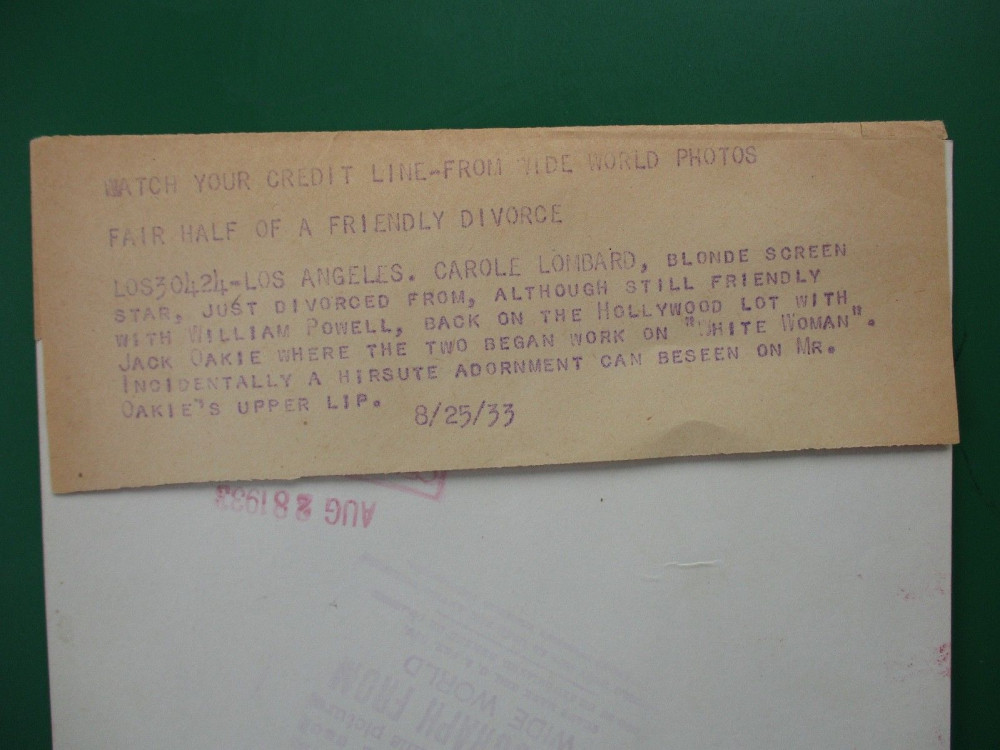 And if you still can't make it out, it reads:

"Carole Lombard, blonde screen star, just divorced from, although still friendly with William Powell, back on the Hollywood lot with Jack Oakie where the two began work on 'White Woman.' Incidentally a hirsute adornment can be seen on Mr. Oakie's upper lip."

Jack Oakie in that campfest "White Woman"? Picture him in the over-the-top Charles Laughton role... 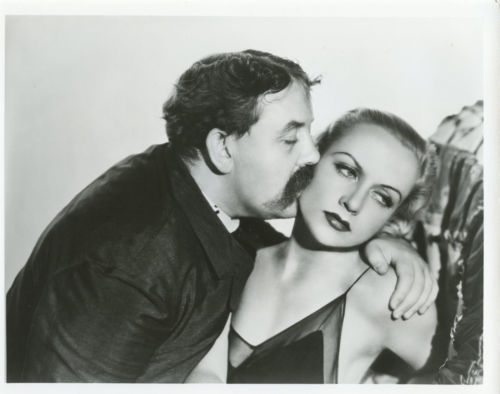 Not likely, since Oakie generally played second leads of a comic nature. It's possible he was assigned to this film as comic relief (which would explain his white outfit, ideal for the steamy Malaysian jungle), until Laughton's overacting proved the production didn't need any more of it. This looks to be something we'll learn when our chronological "Cinematic Sundays" series comes to "White Woman," which should be before the end of the year.

The photo -- an image I've never seen before in my many years of Lombard research -- measures 7" x 9", has the top right corner missing, although none of the actual picture is absent. It had been in an album, but could be straightened out if framed.