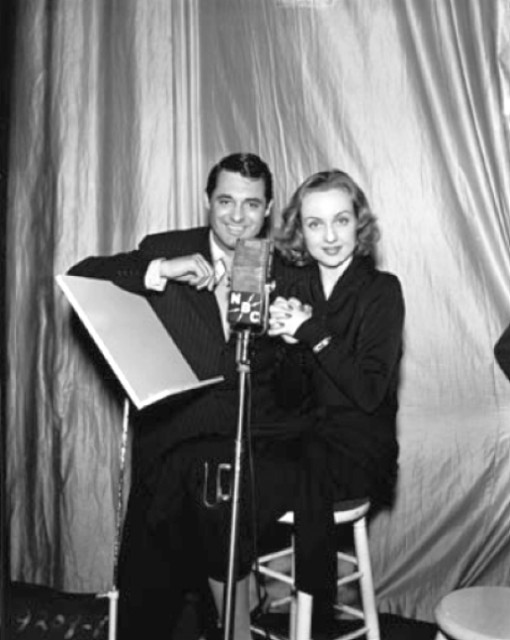 They are the actress and actor most associated with the beloved genre of screwball comedy (apologies to others, such as Claudette Colbert and William Powell), but how many screwballs starred Carole Lombard and Cary Grant? The answer...zero.

Had it not been for Lombard's premature passing, she and Grant almost certainly would have teamed for a comedy somewhere along the line. While they worked a few times on radio (as in NBC's short-lived "The Circle" in 1939), their only co-starring assignment came that year with the RKO drama "In Name Only": 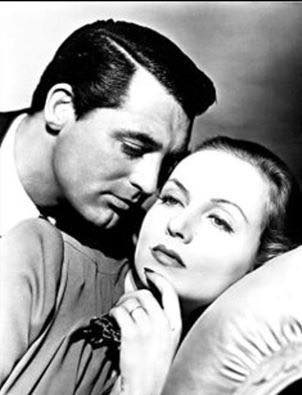 So how close did Carole and Cary get to a comedy? We get a hint from actress-turned-columnist Hedda Hopper, shown with Carole in the 1929 Pathe film "The Racketeer": 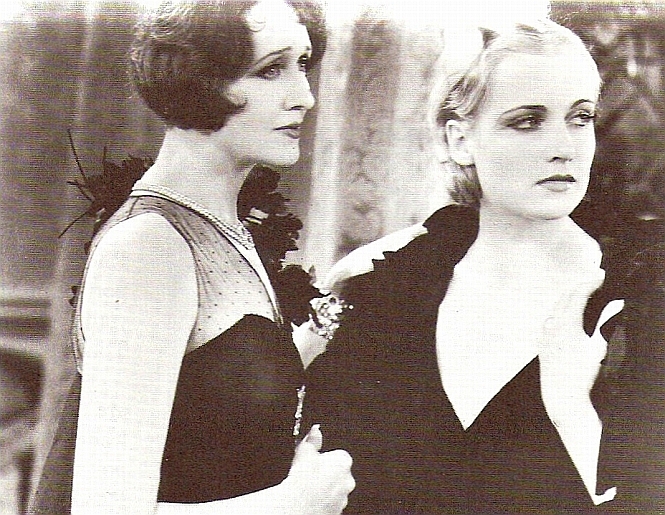 By 1940, Hopper was a well-known Hollywood columnist, with the powerful Los Angeles Times as her home base. On May 13, the opening portion of her column dealt with Lombard: 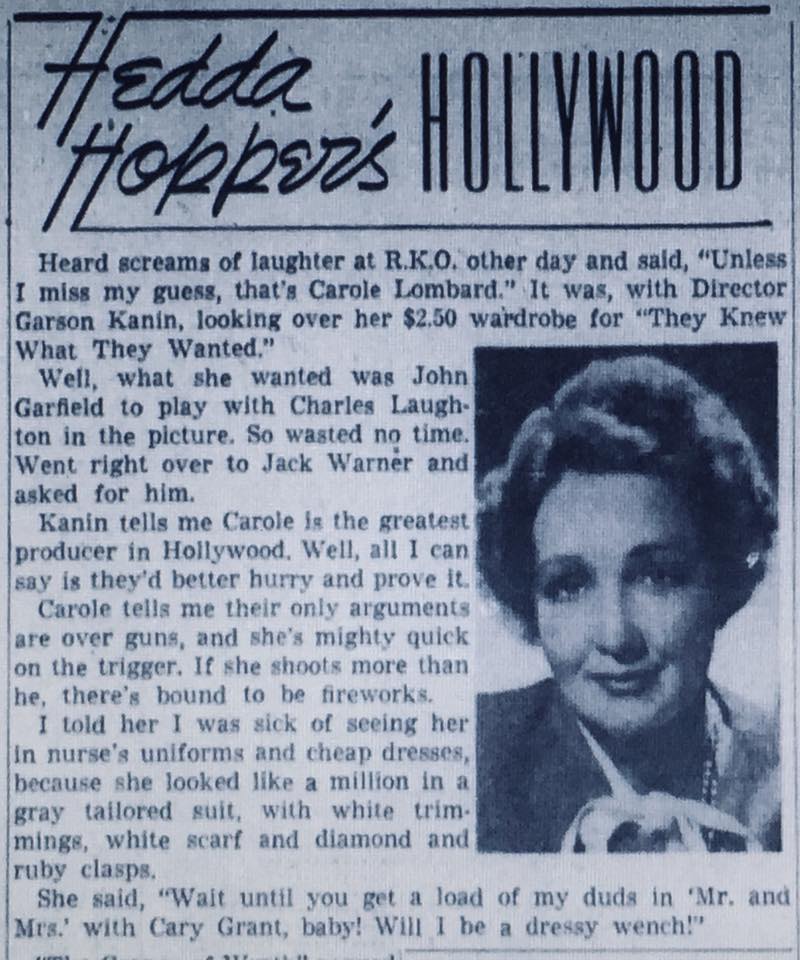 (Thanks to Brian Lee Anderson for tracking this down.)

Hopper was on the set for "They Knew What They Wanted" (the cast would later travel to Napa, Calif., for exterior scenes), and while this segment is brief, it contains several tantalizing tidbits. According to the columnist:

* Lombard wanted up-and-coming star John Garfield cast opposite her and Charles Laughton, presumably in the role that went to William Gargan. Alas, Garfield was under contract to Warners, and Lombard couldn't land him despite her pleading to Jack Warner. (Was the disappointment that was "Fools For Scandal" still in his mind?) She would never work with Garfield, who'd become a major star in the '40s and, like Lombard, would die before his time.
* Young director Garson Kanin (who would capture Carole so vividly in his book "Hollywood") cited Lombard's business acumen, calling her the greatest producer in Hollywood. They also apparently had disagreements over guns, though I'm guessing that by 2018 standards, their debate was fairly tame. (She was a talented skeet shooter.)
* After Hopper chides Carole on her character's cheap outfits, she replies, "Wait till you get a load of my duds in 'Mr. & Mrs.' with Cary Grant, baby! Will I be a dressy wench!" And indeed she would be: 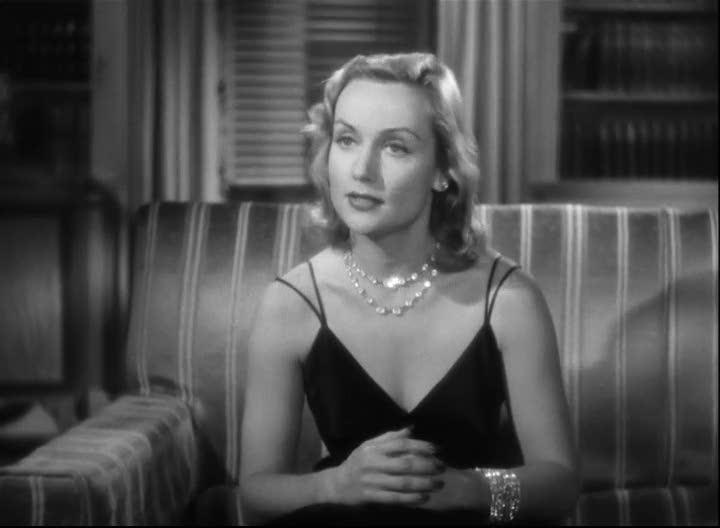 While Lombard biographers, notably Larry Swindell in "Screwball," have stated that Carole eyed Cary as her co-star in the film (the "Smith" would later be added to "Mr. & Mrs."), this is the first time I've seen her discuss this in print. (Lombard helped produce the project, though she was uncredited.)

So what happened? Perhaps Grant couldn't work it into his increasingly busy schedule; by this time, nearly every studio in town sought him. He certainly had no problems working with Lombard, a friend since his arrival at Paramount in 1932. They may have agreed to team up somewhere down the road, not knowing fate's upcoming roadblock. Cary and "Smith" director Alfred Hitchcock would work on several occasions, including "To Catch A Thief" and "North By Northwest." 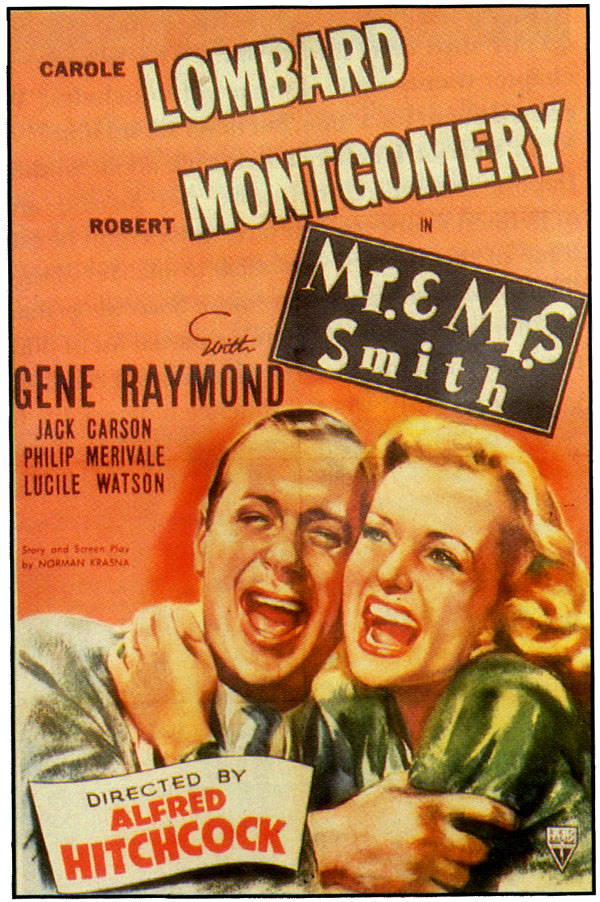 Instead of Grant, Lombard's co-star would be Robert Montgomery, a fine actor in his own right (although younger audiences may now know him better as Elizabeth Montgomery's father). Carole's return to comedy would prove a major success.

We'll close with another pic from spring 1940, this newspaper photo (one I've never seen before) showing Lombard modeling fashions with Priscilla Lane and Ginger Rogers: 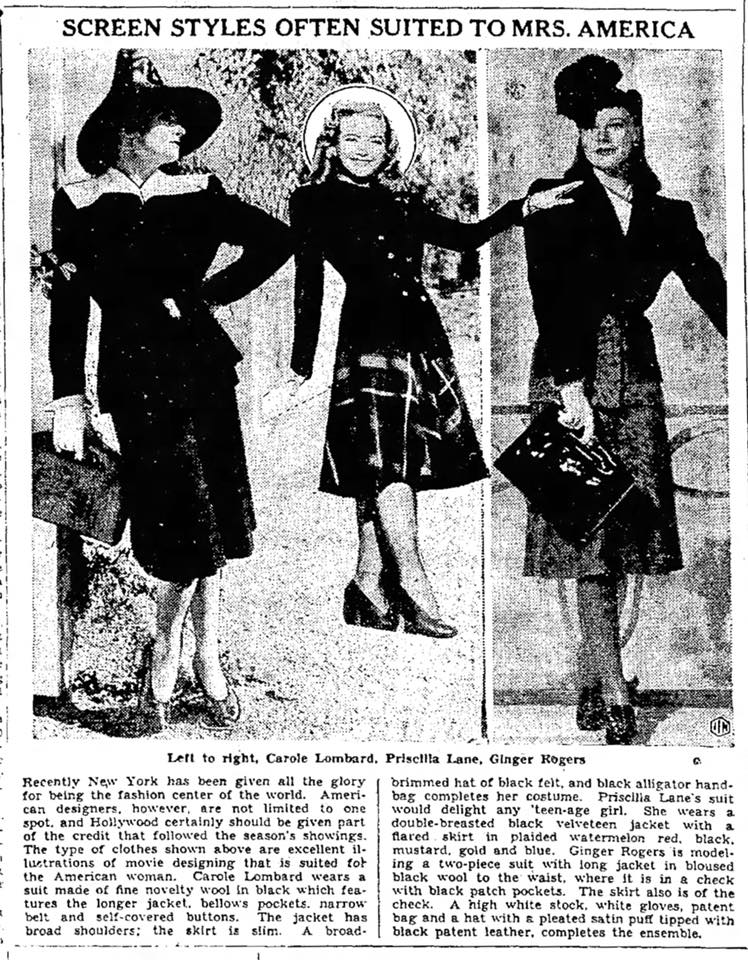