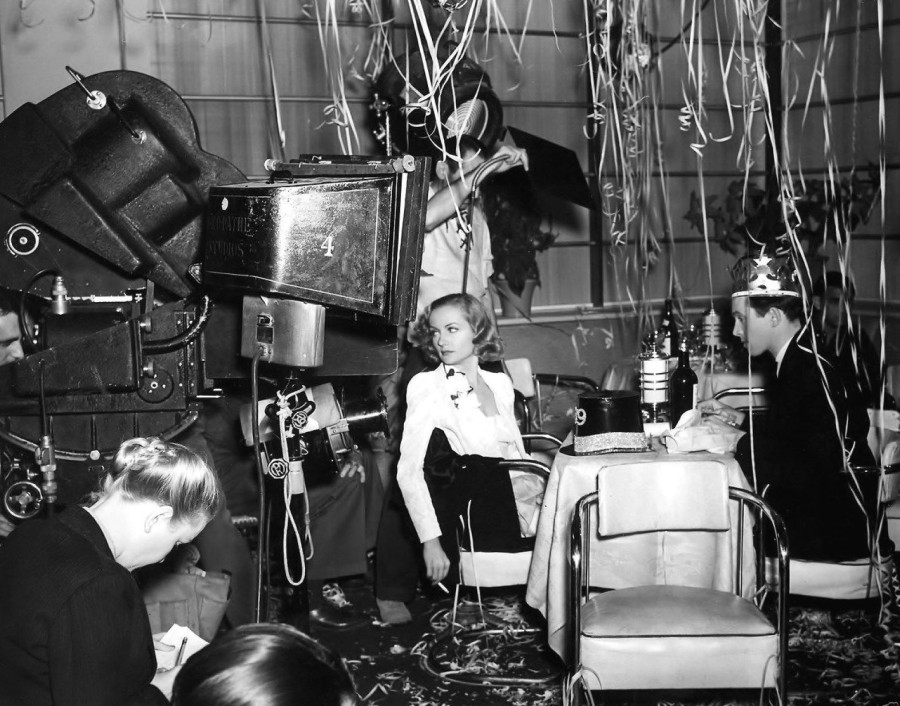 It's supposed to be New York City on New Year's Eve as 1938 turns into 1939...but actually, it's Culver City, Calif., a few months earlier, as Carole Lombard and James Stewart are filming a party scene at Selznick International Studios in "Made For Each Other."

If you're currently in New York or much of the East or Midwest, you'll ring in 2018 tomorrow night under record cold conditions, expected temperatures that already have wiped out some outdoor celebrations. I've lived in Los Angeles since mid-2014, save for a three-week stretch in northern Florida...but since I was born and raised in snowy Syracuse, N.Y., I know what many of you are going through. My sympathies.

Tomorrow's entry will sum up 2017, but for now, here are some folks from classic Hollywood spreading New Year's greetings in a wide range of ways. Years before, I'm certain we ran this cute image of starlet Myrna Loy sleeping on the job as 1927 waits for its entrance: 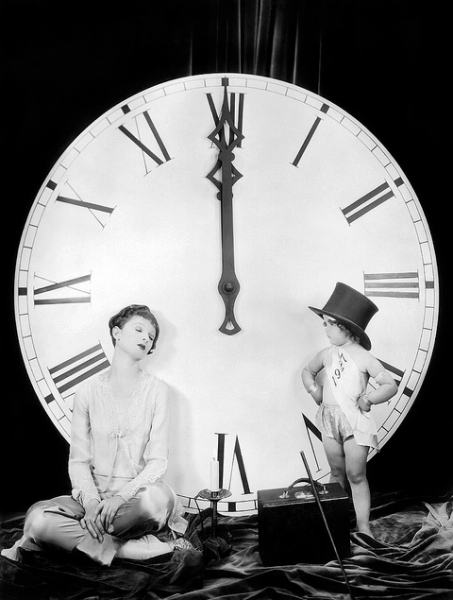 Years later, Loy was a top-tier talent who nevertheless still posed for such pics, but at least this one wasn't as trite: 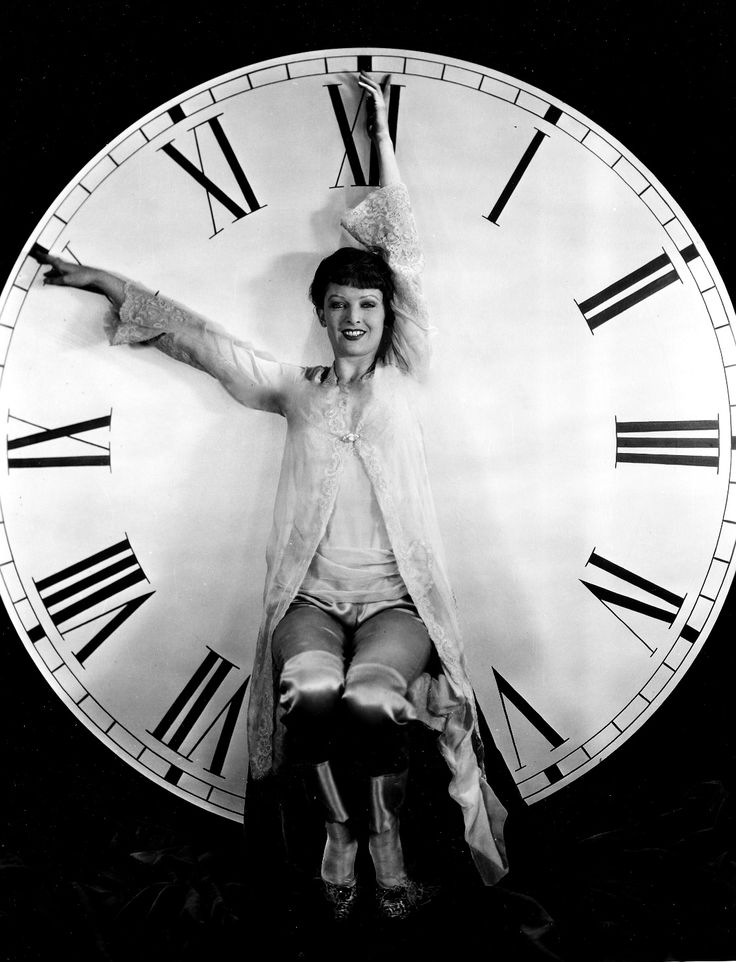 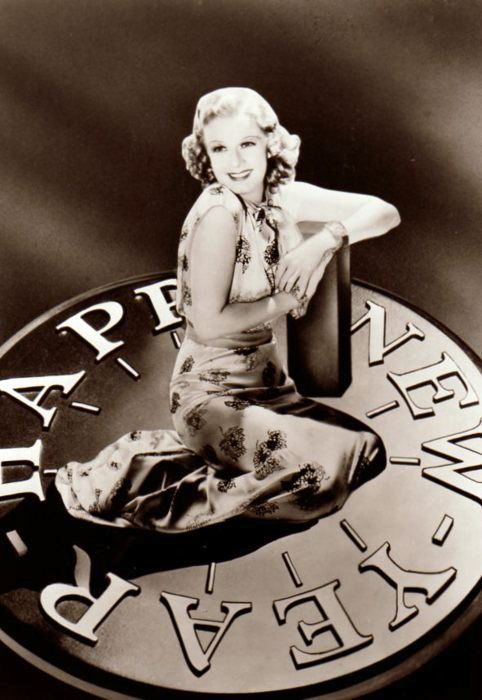 So did Alice White (hope her resolutions included "don't buy stocks on margin" and "don't invest in Anaconda Copper"): 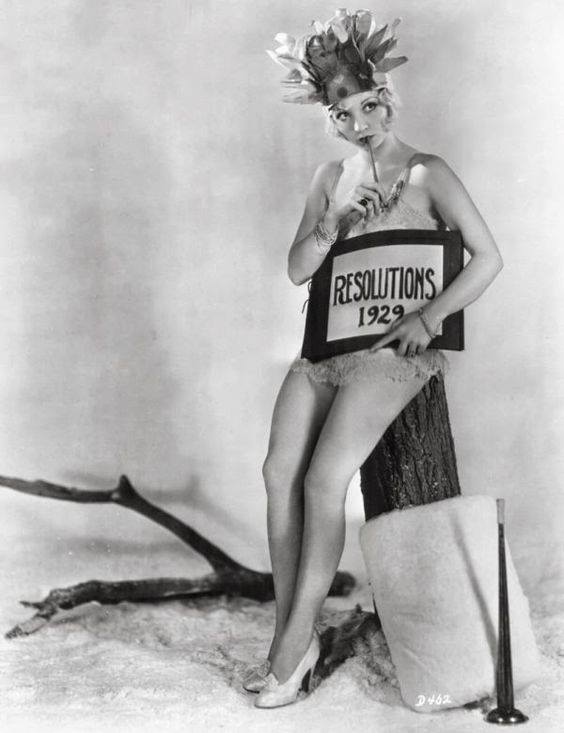 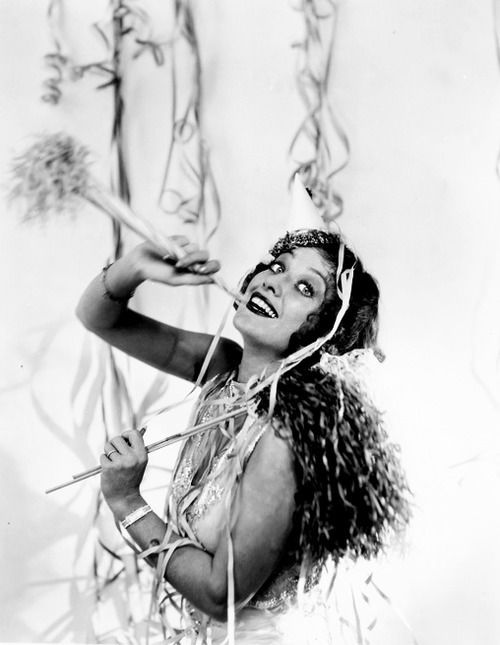 As 1929 turned into 1930, Nancy Carroll had succeeded Clara Bow as Paramount's top female attraction, so it made sense to pose her sitting on top of the world: 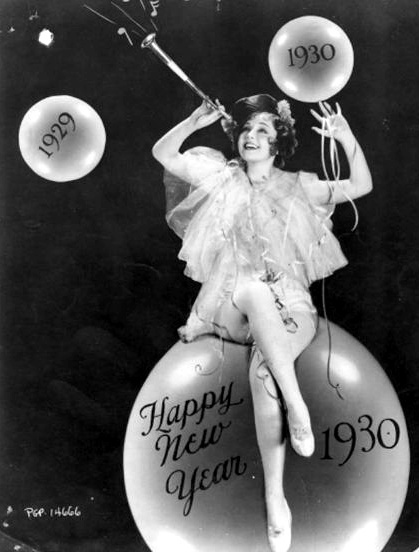 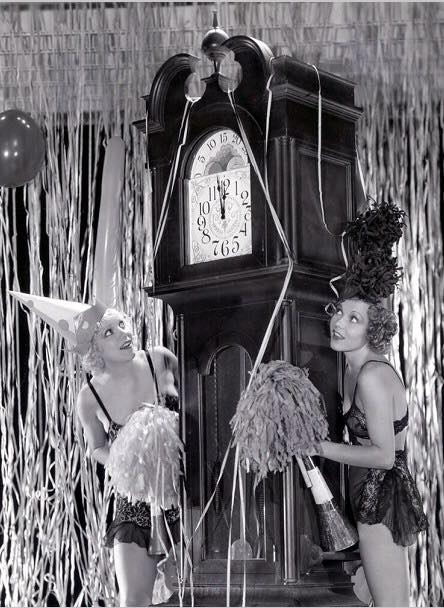 Child wonder Shirley Temple, who'd still be in single digits when 1937 ended, prepares to welcome it in: 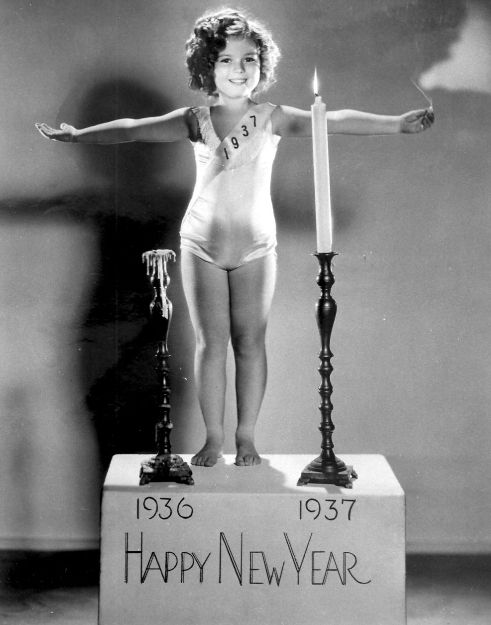 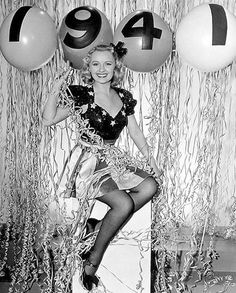 Here are a few other pics from the forties. Ann Miller rings in 1944...

...as does Ava Gardner, though she gets some help from the Hollywood Canteen (and a "V" sign): 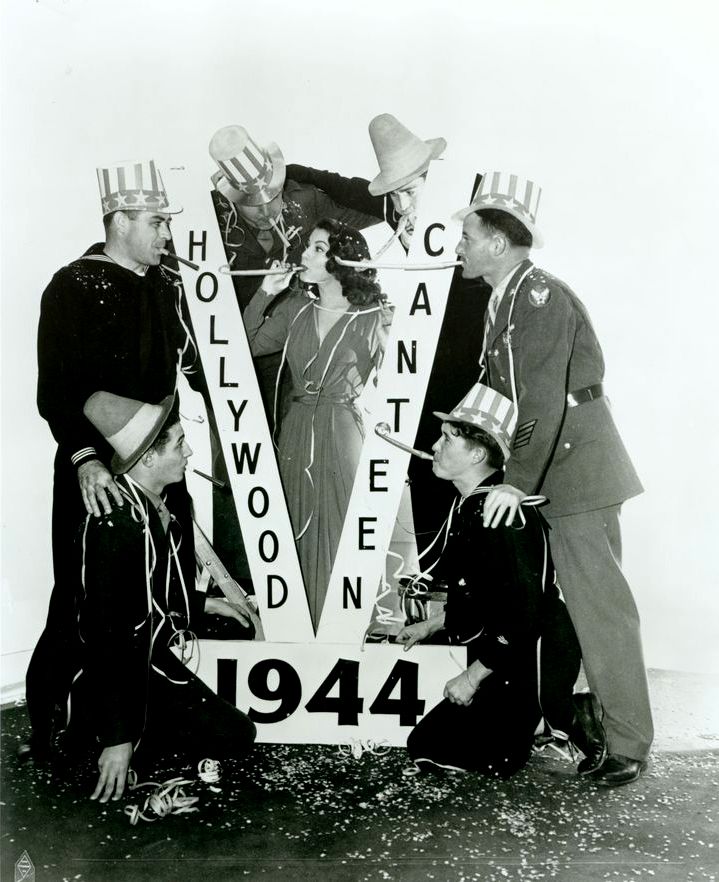 Also presumably from that decade, Dorothy Lamour, who inherited Carole's dressing room at Paramount when Lombard left the studio... 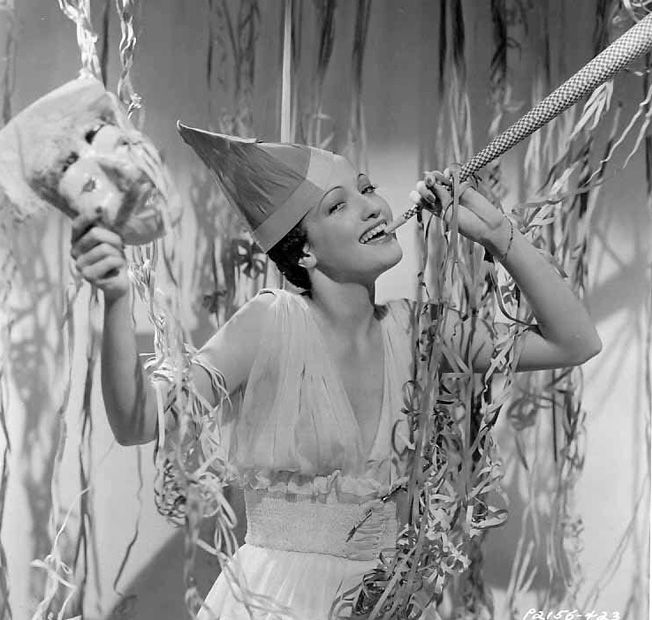 ...and the enchanting Loretta Young: 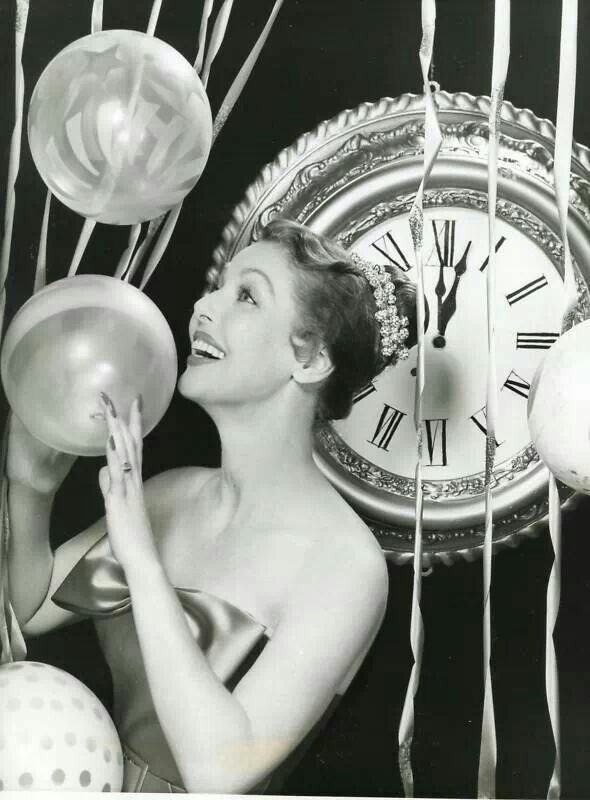 This image of a youthful Iowa native Donna Reed looks to be from the 1940s, too: 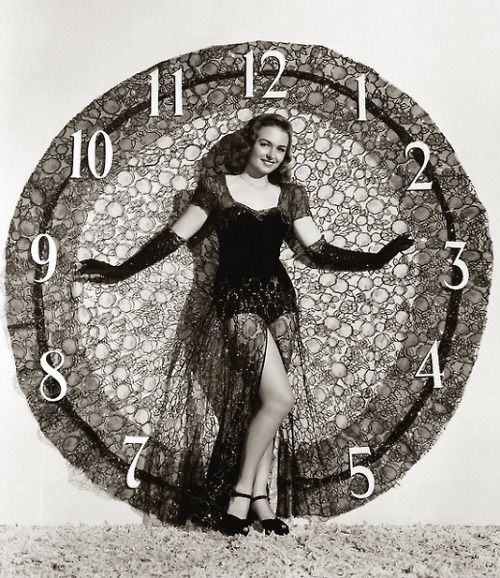 Now to the latter part of the '40s, first for noir notable Jane Greer... 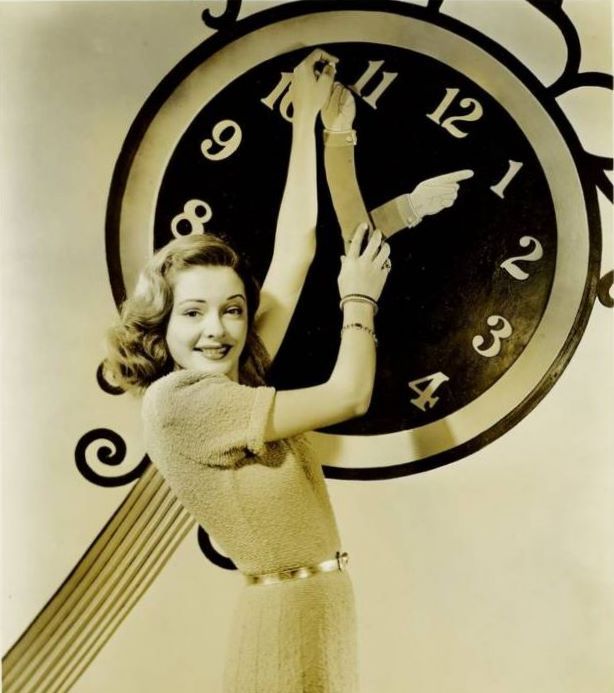 ...then for everyone's favorite lovable "dumb blonde," Marie Wilson. (Did you know that early in her career, she had a supporting role in Carole's "Fools For Scandal"?) 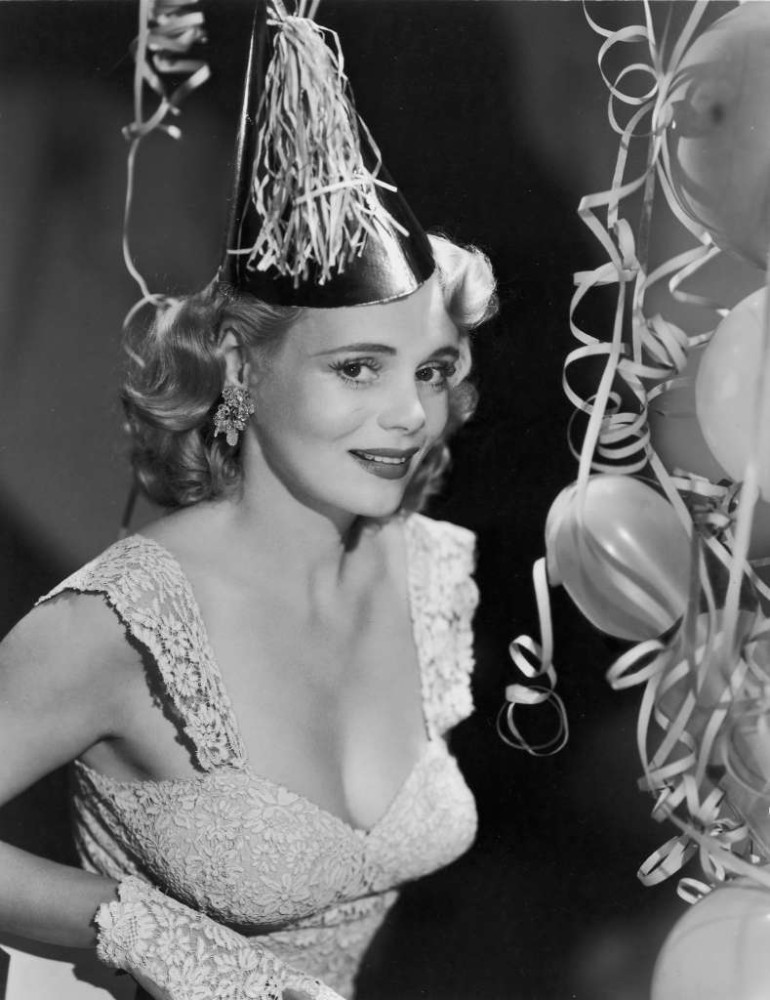 Now to the '50s and Julie Adams, best known for "The Creature From the Black Lagoon" but a fine actress with a substantial and varied career. Here, she says hi to 1954: 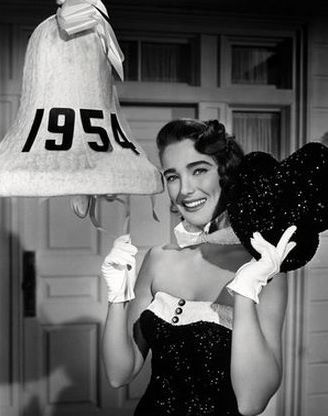 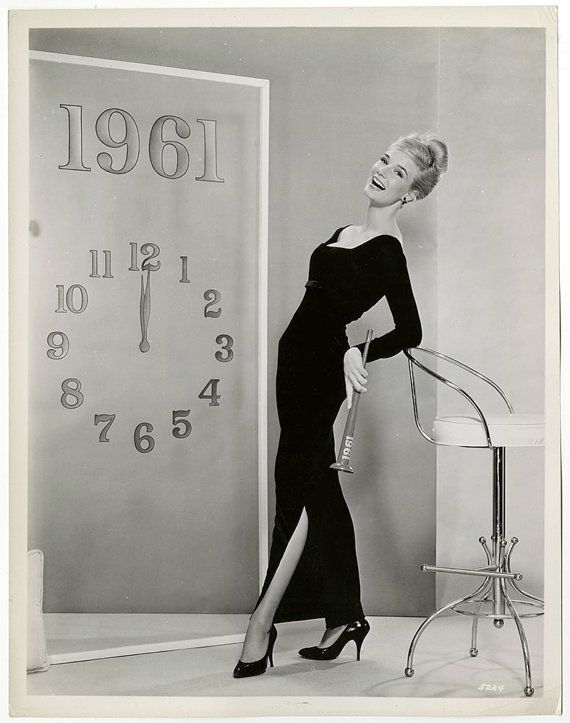 Before a genie outfit made her a TV icon, beautiful Barbara Eden got plenty of work on both the small and big screen, as she steps into 1963: 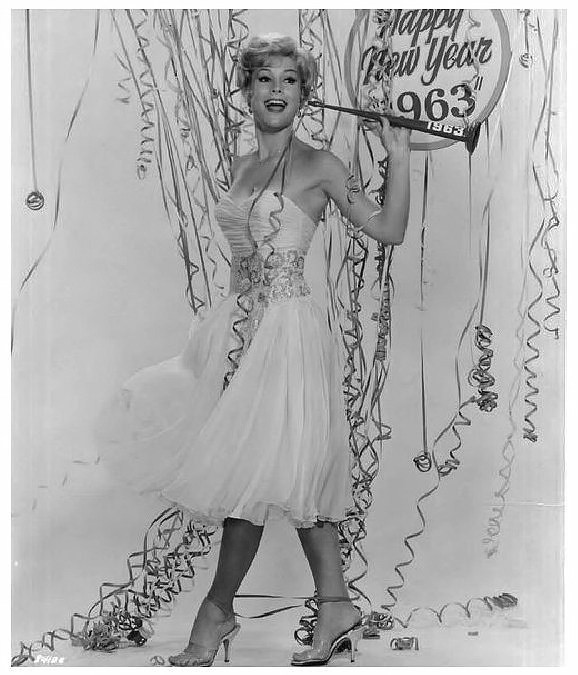 Elke Sommer was a popular actress throughout the sixties, and prepares to say hello to 1969: 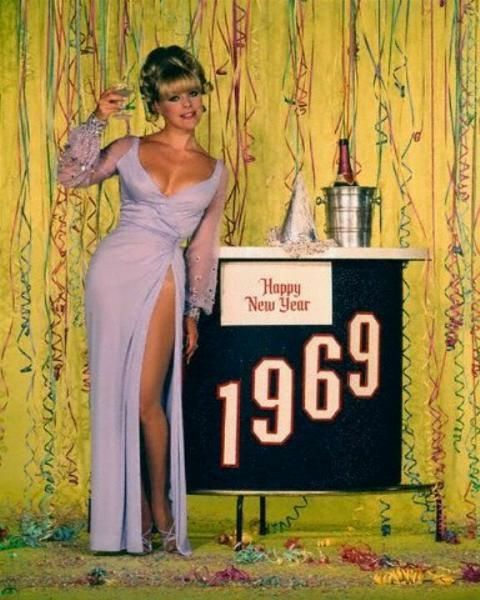 And no, we haven't forgotten the guys. Bing Crosby became extremely popular during the 1930s, and would do so in 1940 and beyond, due in large part to hitting the "Road" with golfing buddy Bob Hope: 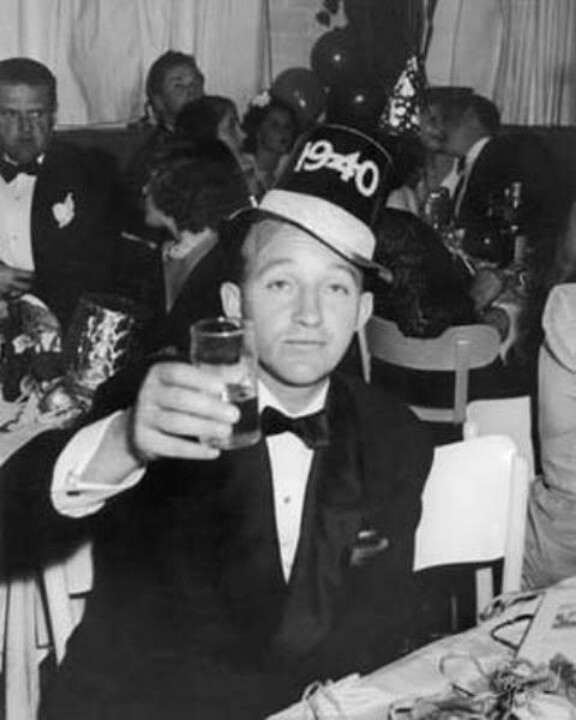 Finally, a "fantastic four" of filmdom all dressed up on New Year's Eve 1957. From left, Clark Gable, Van Heflin, Gary Cooper and Stewart:

A toast to all of you for a safe and happy New Year's Eve. Please be careful out there -- I have plenty of goodies planned for 2018, and I want you on hand to enjoy them.
Collapse