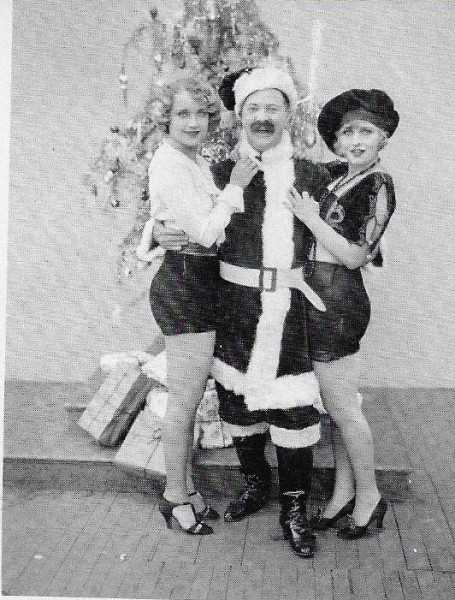 I'm guessing the photo above, showing Carole Lombard with fellow Mack Sennett stars Billy Bevan and Ruth Hiatt, was taken for Christmas publicity in 1927. Ninety years later, here we are, celebrating the season.

Hope your Christmas is a good one. This is my fourth holiday in Los Angeles, and after nearly two years of economic struggle, things are beginning to look up, even if I feel rather lonely. For the past five months, I've been in transitional housing, so I don't have to worry about staying in shelters on often-dangerous Skid Row. This fall, I began receiving Social Security benefits -- rather meager, to be sure, but I feel comparatively wealthy compared to several months ago. I'm still seeking work, with hopes something will pan out in 2018.

But enough about me. Yesterday's entry celebrated Hollywood holidays with seasonal photos of actors; today, we'll examine Christmas with vintage views of LA back in the day. But before we do, two pics of centenarian classic-era stars who, I'm proud to say, are still with us -- and for some reason, we overlooked them yesterday. First, actress and activist Marsha Hunt, who turned 100 in October, making spirits bright with plenty of gifts in this Paramount image: 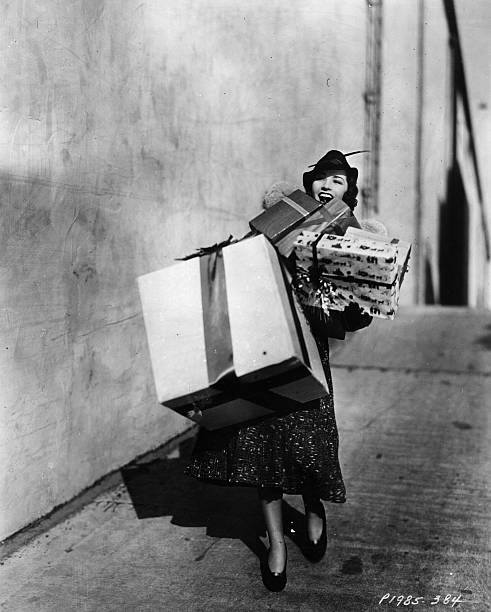 Hunt reportedly continues looking for acting jobs (someone team her up with fellow centenarian Norman Lloyd!).

Meanwhile, here's a 1930s winter pic of Mary Carlisle, now 103, who knew Lombard, Jean Harlow and so many other notables while having a fine career in her own right: 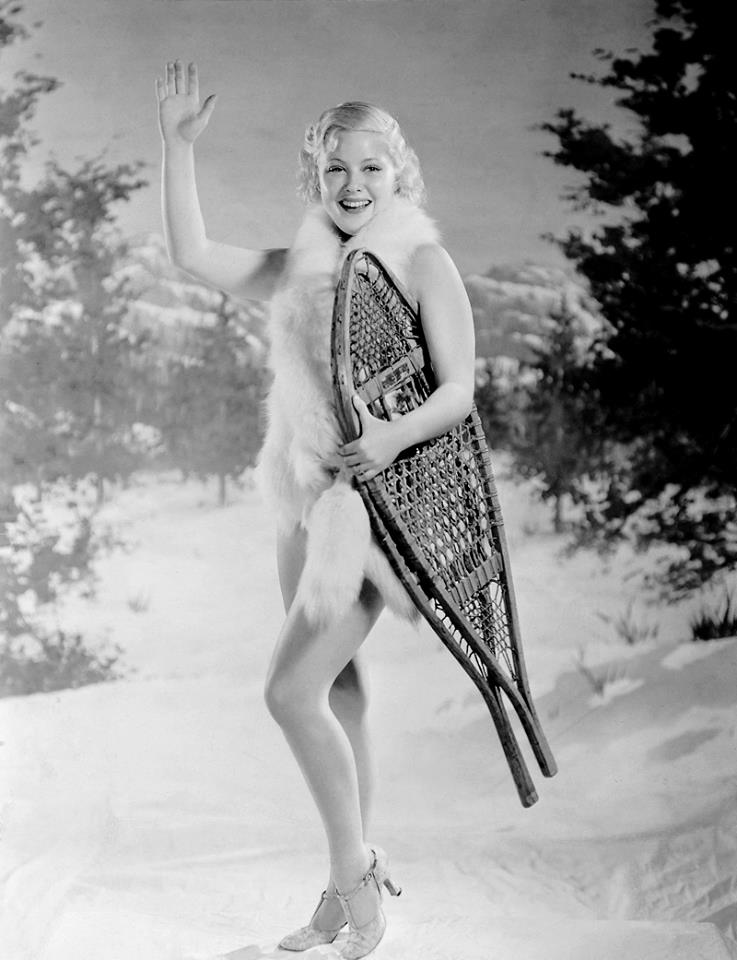 I presume that backdrop is merely a blown-up photograph, a substitute for CGI in olden days. Mary is visited regularly by my Facebook buddy and Harlow maven Darrell Rooney.

Now onto scenes from a Los Angeles relatively few of us never experienced, either because we hadn't been born or had yet to visit here. We'll begin with a favorite of tourists -- the fabled interior of the 1893 Bradbury Building downtown has been used in movies for decades, including the original "Blade Runner" and "The Artist" -- but have you ever seen it in a Christmas mode, as it was in 1950, the year it was featured in the original "D.O.A."? 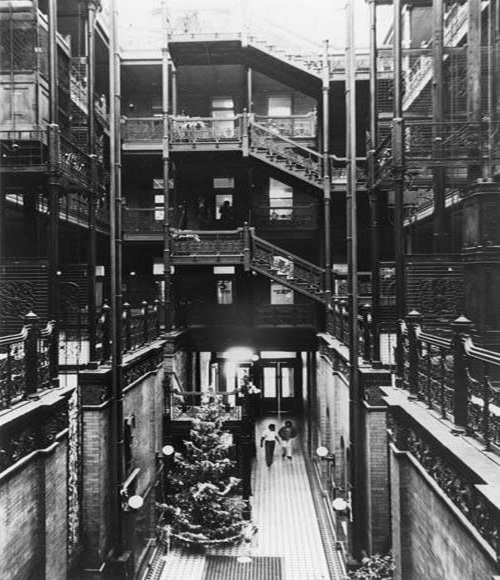 A year before and a few blocks away, the Christmas tree at Pershing Square is shown. The landmark meeting place is periodically reinvented, and another renovation will soon take place: 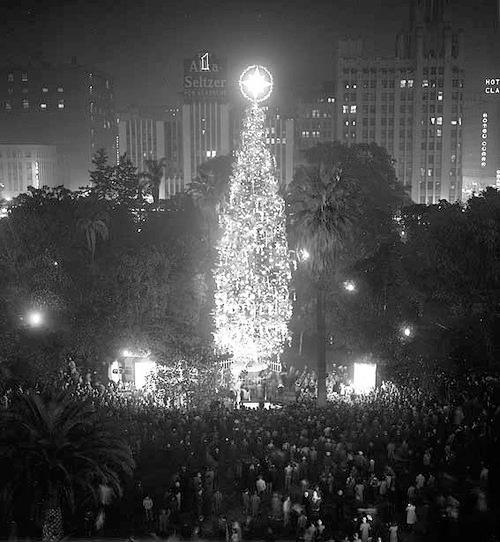 This one takes us back to Lombard's time, as it's downtown (Broadway) in 1928. The Western Costume Co. was then headquartered here, and that year director/actor Erich von Stroheim, whose demand for accuracy had few bounds, ordered an array of authentic Austrian military uniforms for his silent epic "The Wedding March" (whose feminine lead was a young Fay Wray): 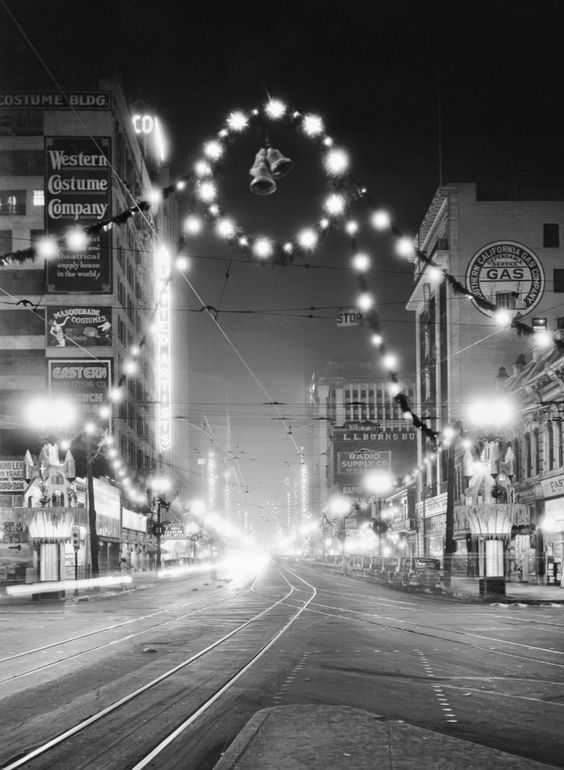 The Hollywood Christmas Parade began in 1928, and continues to this day. Here's a float traveling along Hollywood Boulevard in 1939: 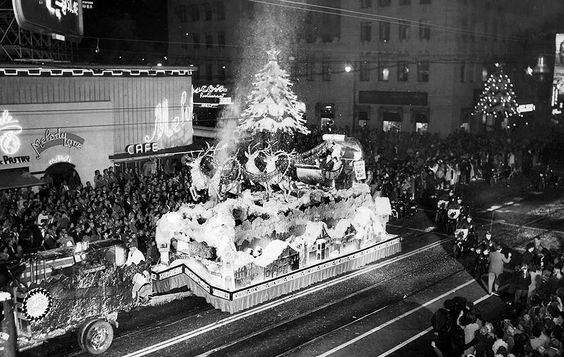 A year later, the Boulevard (aka "Santa Claus Lane") is shown at day... 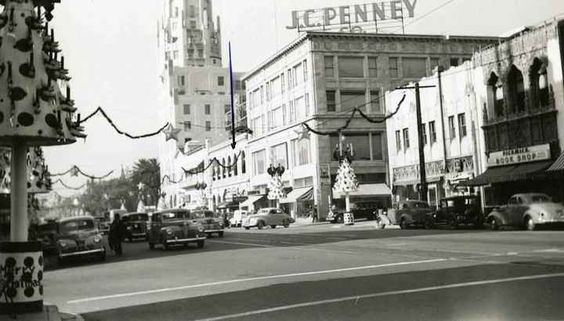 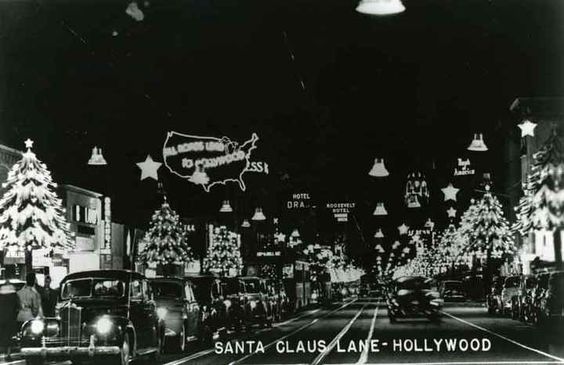 Some of us struggle at Christmas time. That was the case in 1934, when the Salvation Army sponsored a free holiday dinner for those coping with the Depression: 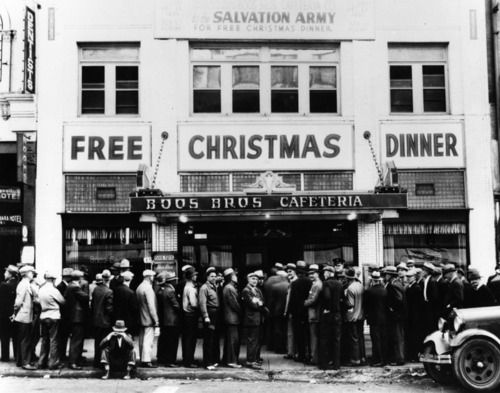 It's back to the Boulevard for this 1937 version of a tree decoration:

Finally, an image of the venerable Los Angeles Memorial Coliseum -- already more than a quarter-century old when this was shot at dusk on Dec. 19, 1949 -- one day after the Los Angeles Rams lost the NFL title 14-0 to the defending champion Philadelphia Eagles, a game played in a driving rainstorm that kept the crowd to little more than 22,000. 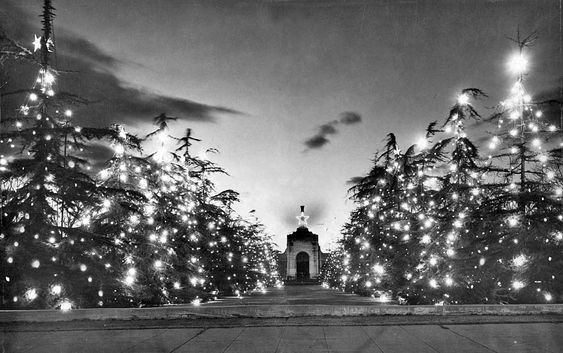 And congratulations to the Rams, who in their second season back from St. Louis clinched the NFC West crown yesterday with a win at Tennessee. They will host a playoff game on the weekend of Jan. 6-7.

Once again, merry Christmas, one I hope is filled with magic. Speaking of which, here's the Magic Castle in Hollywood, dressed up in spectacular seasonal finery: 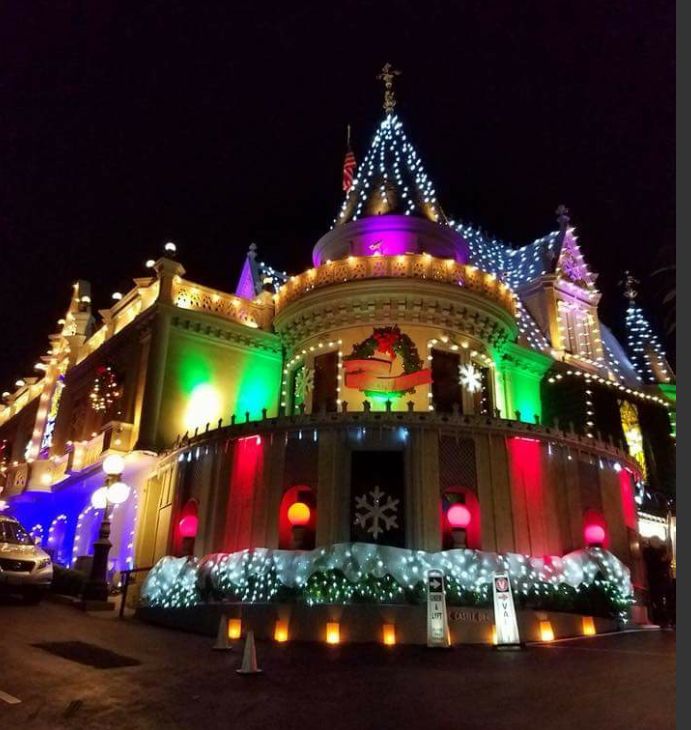