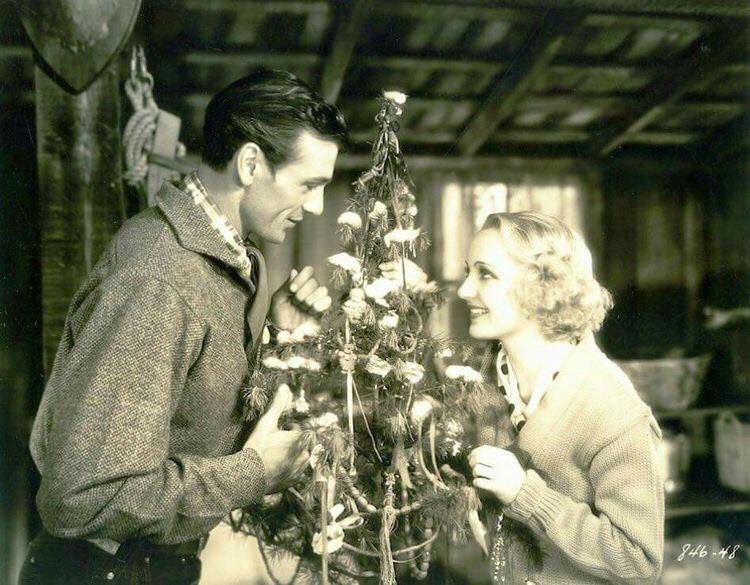 For most of you in the U.S., the sun has set on Christmas Eve and nighttime has arrived. Carole Lombard celebrates the season with Gary Cooper in this charming photo from 1931's "I Take This Woman" (https://carole-and-co.livejournal.com/859635.html), and for today and tomorrow, we'll do so, too.

This entry will show holiday themed-pictures from Hollywood people through the years; some of them worked with or knew Carole, while others born too late probably admired her artistry. Some pics are serious in tone, others border on cheesecake (a favorite approach for holiday publicity in days of yore, as our recent entries on Halloween and Thanksgiving made evident).

We'll begin with an actress pictured one year ago today, less than two weeks before her passing from cancer at age 80, a condition she kept secret to all but a few close friends (https://carole-and-co.livejournal.com/856902.html). I miss Francine York dearly, and still can't get over her absence: 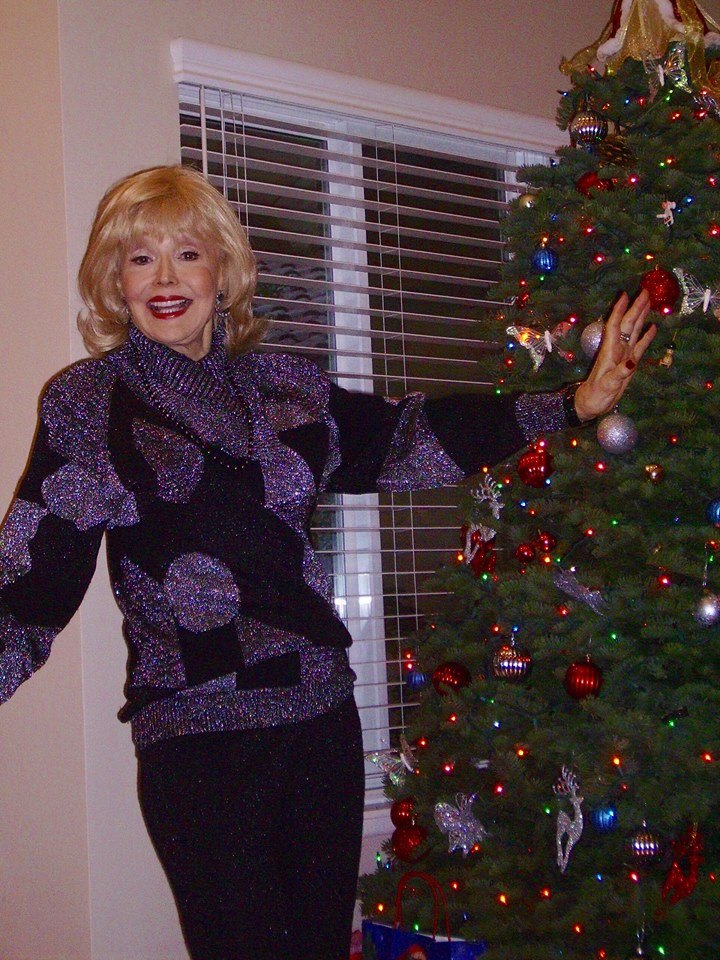 Now, back to Lombard's friends and foes, such as this late '20s image of her Cocoanut Grove dance contest rival, Joan Crawford. For her sake, I hope those hose of hers are thick and thermal: 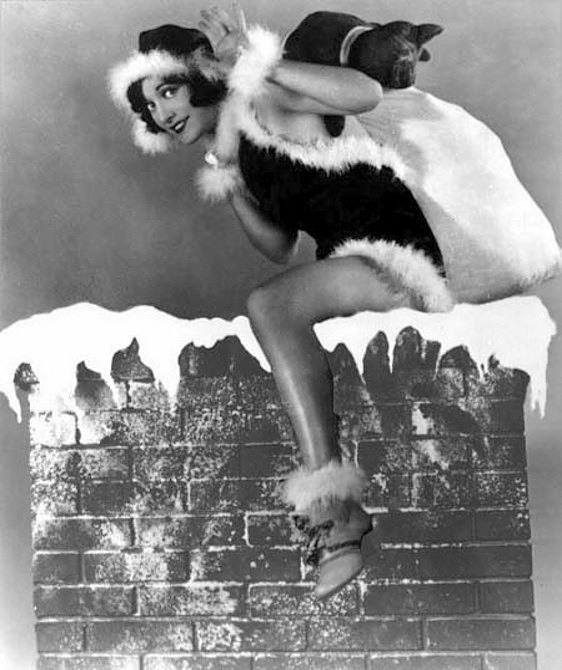 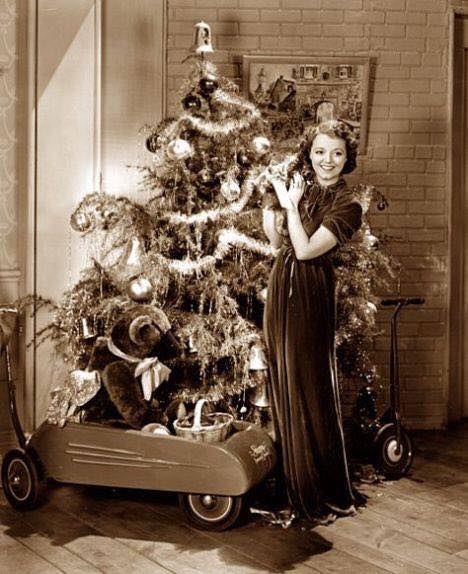 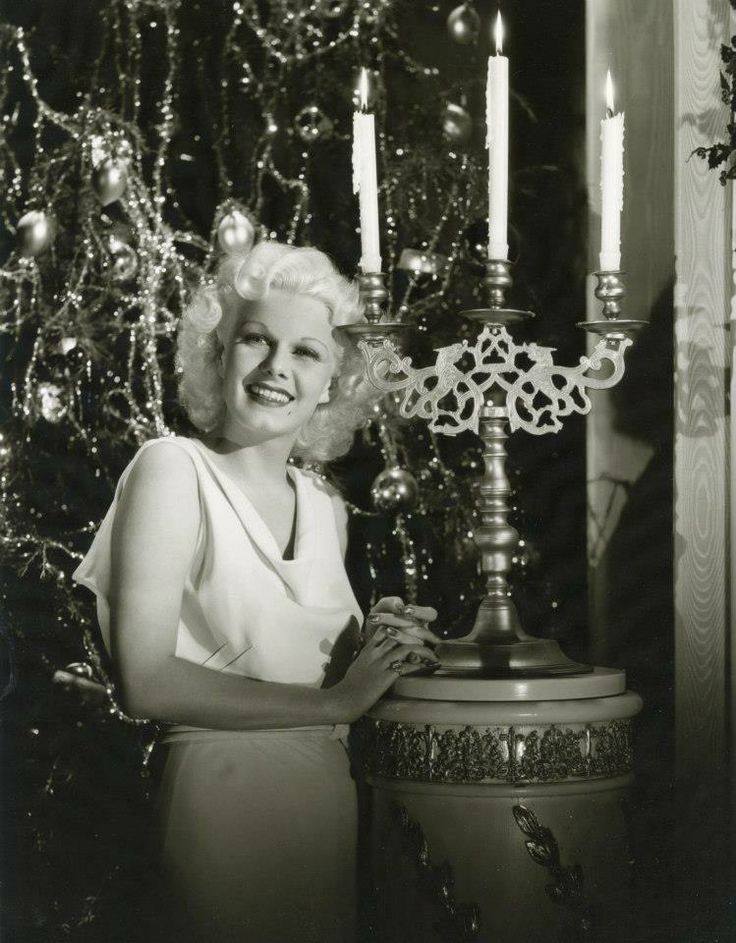 Harlow's "Platinum Blonde" co-star Loretta Young shows off her seasonal spirit in a pic probably from the time of her '50s TV series: 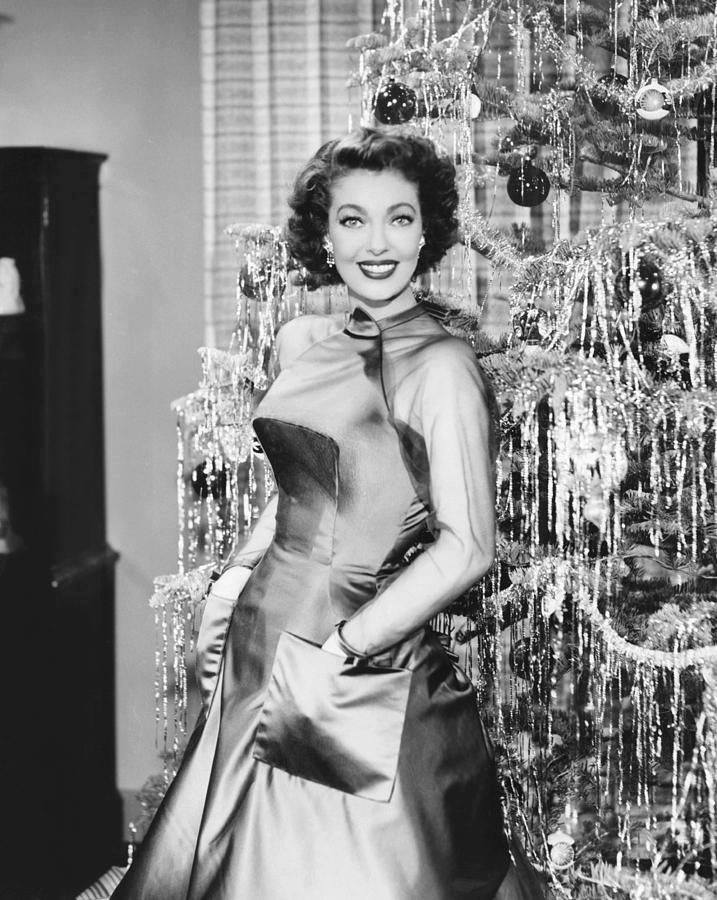 Back to the '30s for the delightful Joan Blondell and the legs that made her a pre-Code goddess: 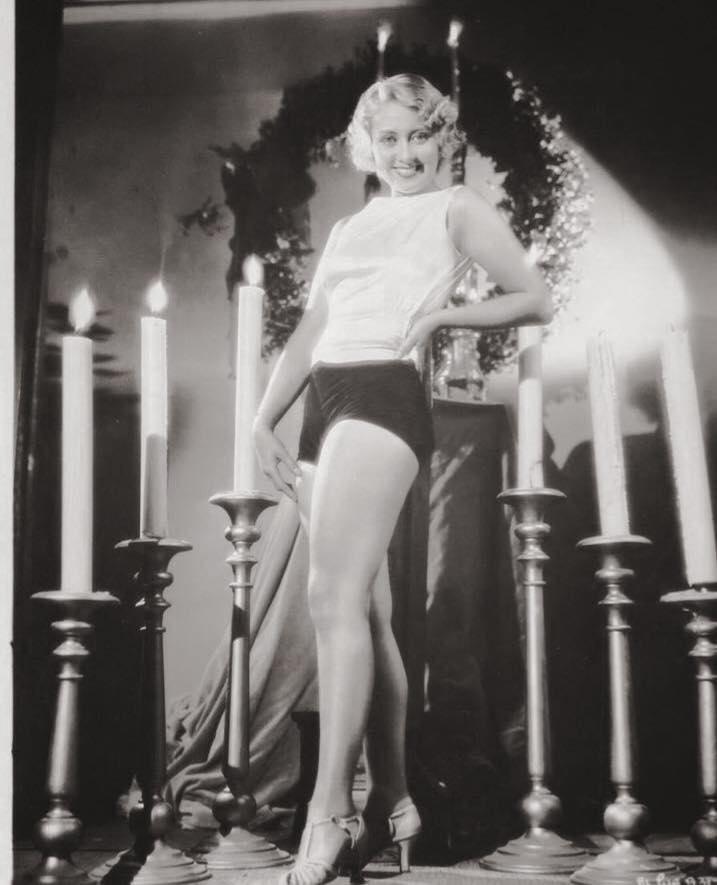 Also in the '30s, now bereft of the page-boy 'do she popularized in the previous decade (far more so than Louise Brooks -- sorry, hipsters), here's Colleen Moore: 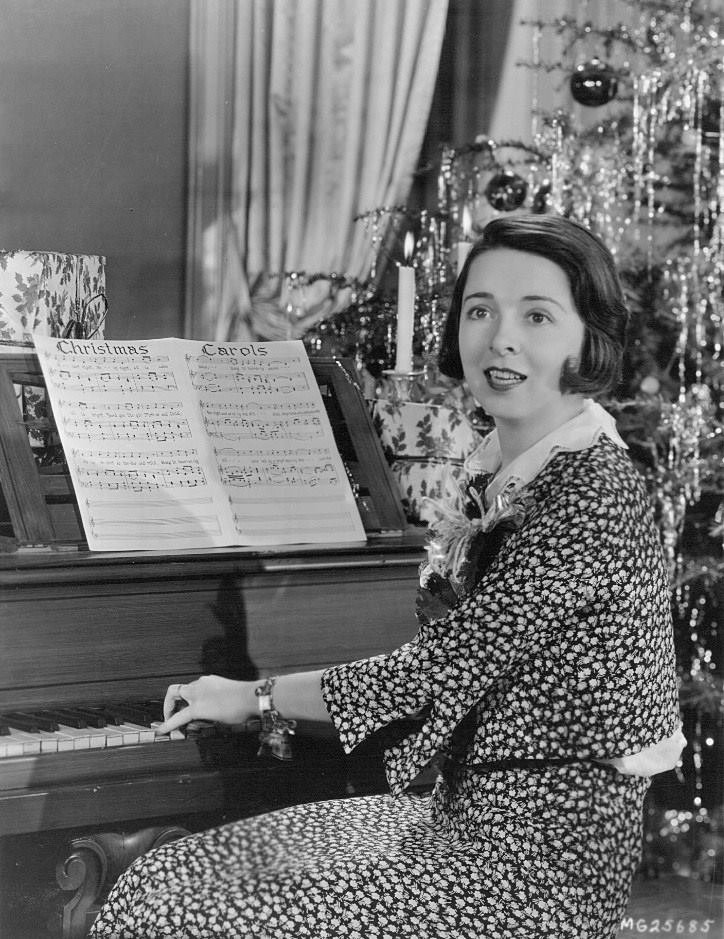 Thelma Todd enjoyed twisting holiday expectations; an Independence Day photo shows her in the snow near a cannon, with snowballs in the role of muskets. For this Christmas shot, she's wearing...a sombrero: 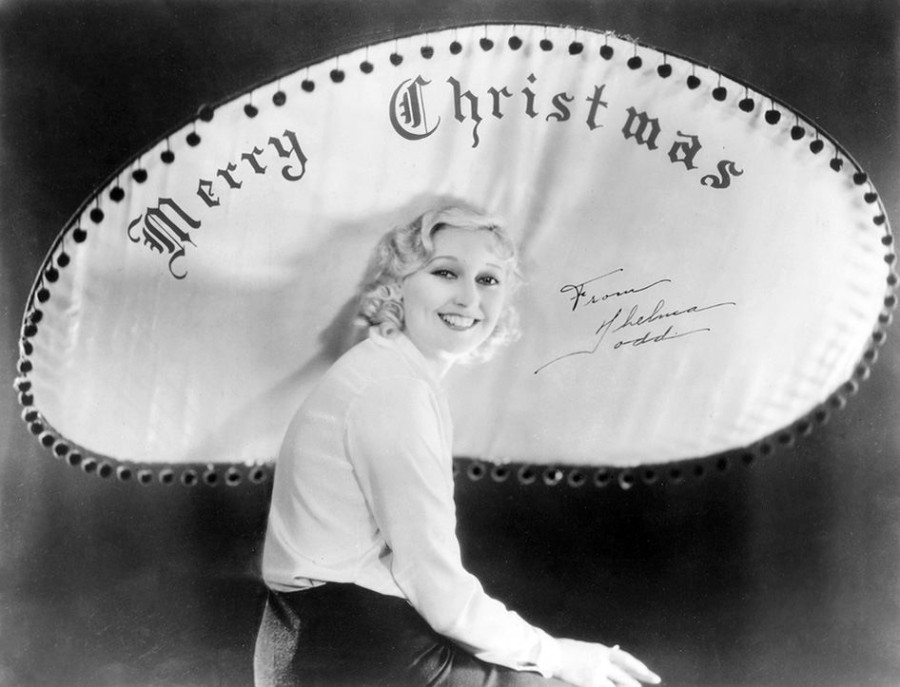 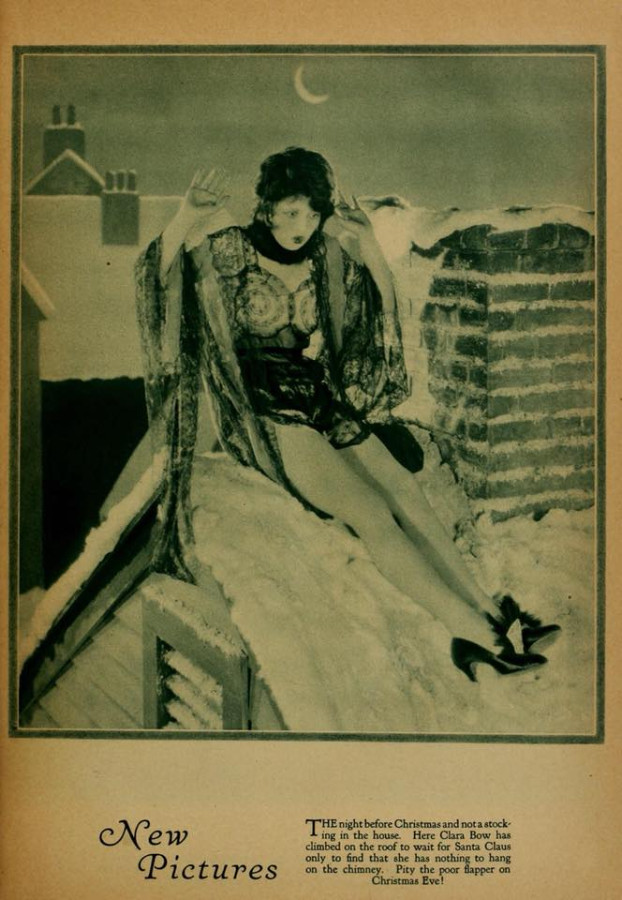 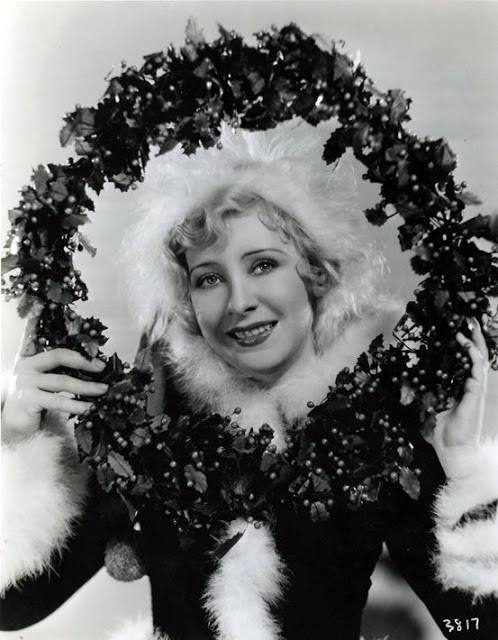 So does kewpie doll Alice White, a star at the close of silents and the first few years of sound: 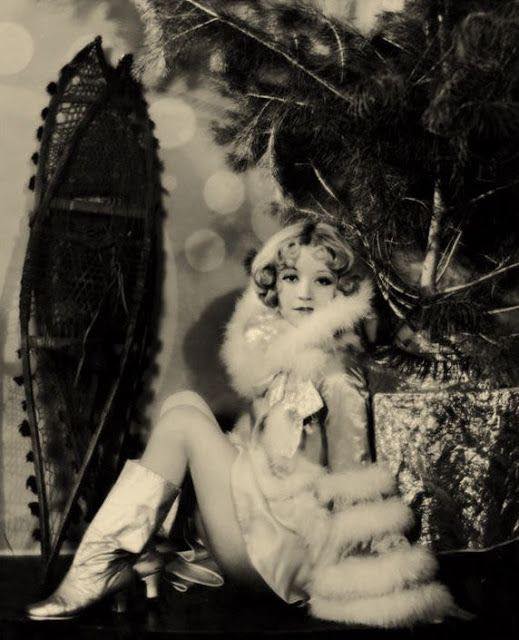 If this is truly Alice Faye's house, it's the one she shared with radio co-star and real-life husband Phil Harris: 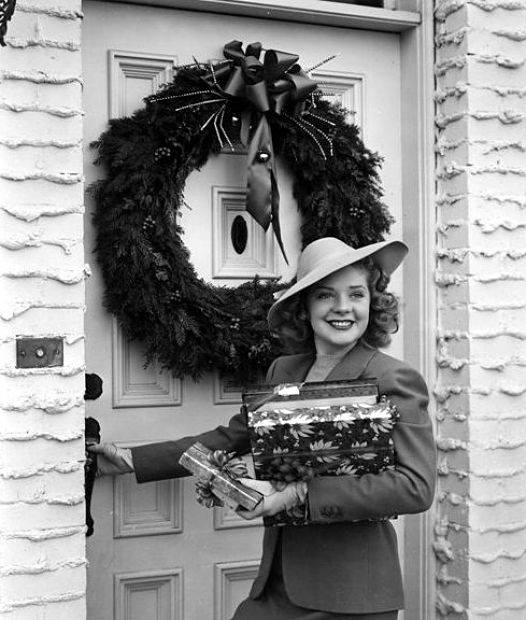 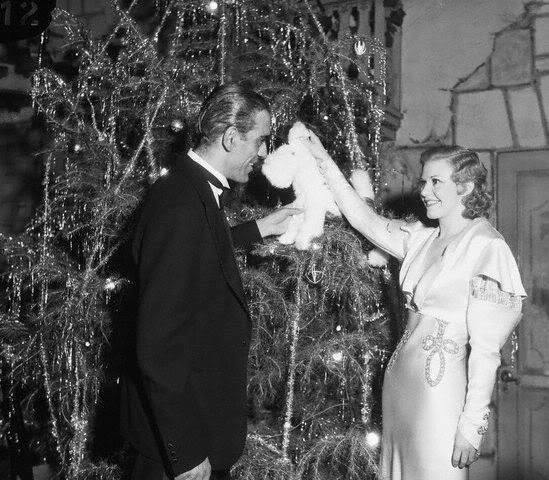 This has two actresses with ties to Spain or the Spanish language, Anita Page (born Anita Pomares) and Mexican-born Raquel Torres: 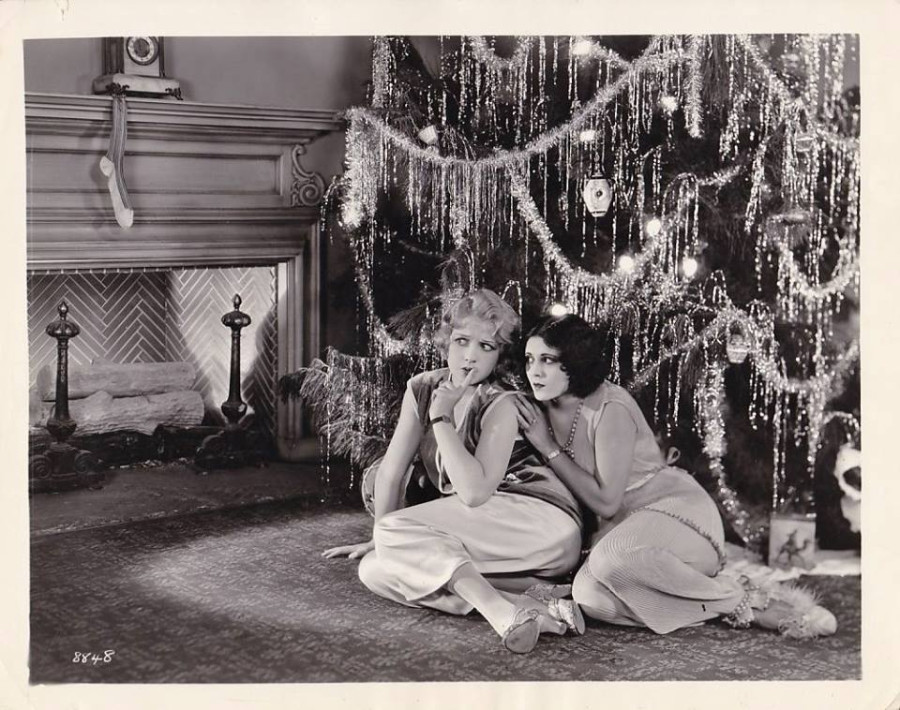 Now to move up to the postwar era. That's Robert Mitchum, who showed off his comic chops in 1949's "Holiday Affair," holding numerous boxes of gifts: 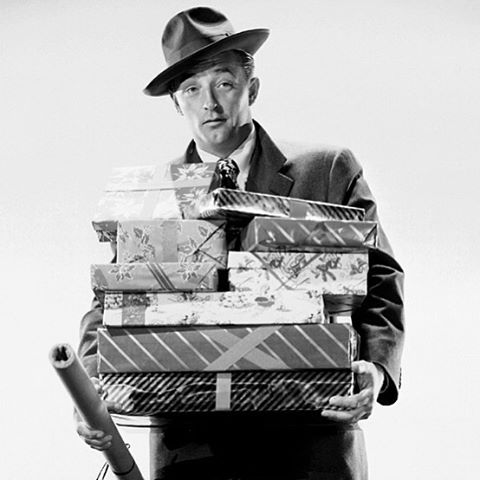 Also with presents is Doris Day: 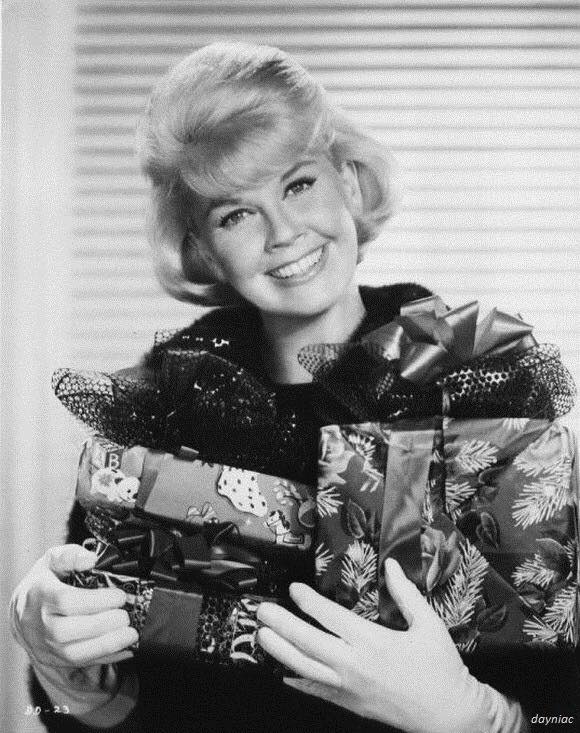 Vera-Ellen dances atop a chimney (be careful, hon): 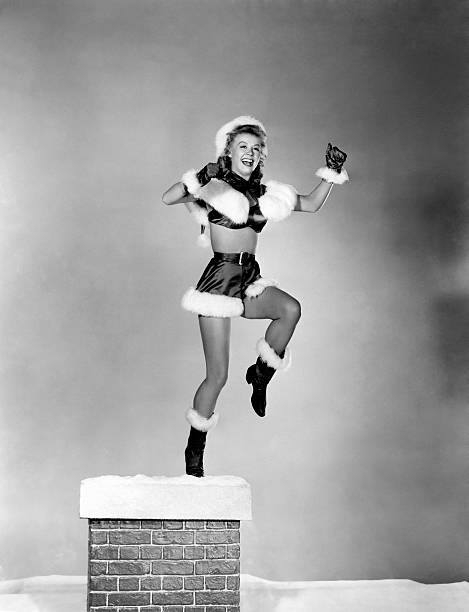 Shapely British bombshell Diana Dors fills out a Santa suit like few others can: 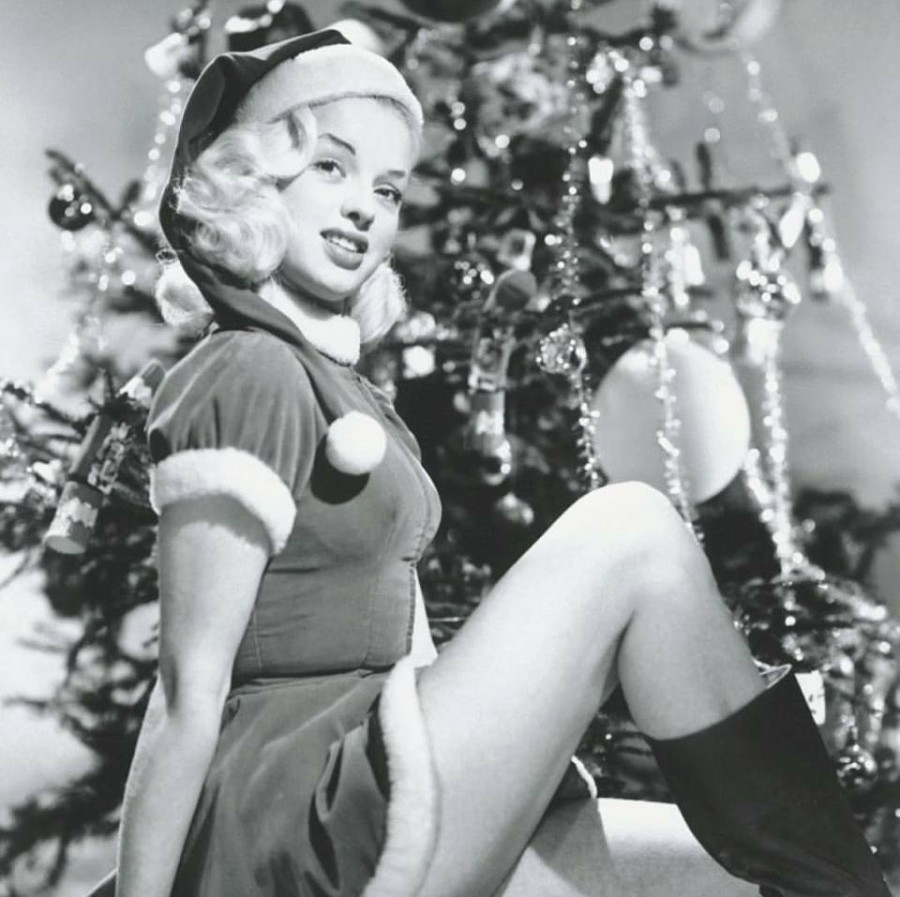 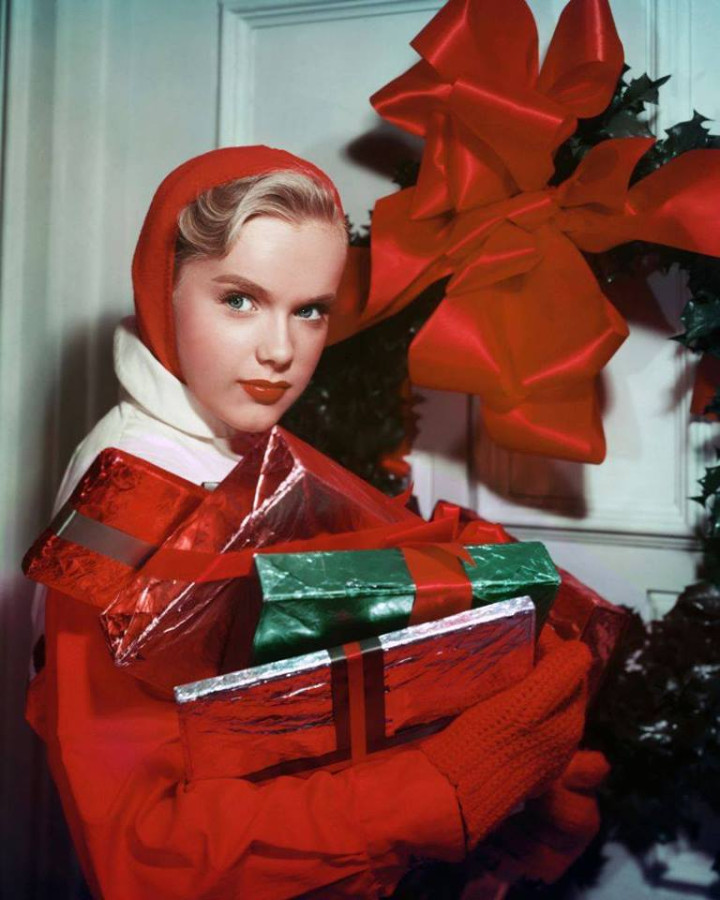 Elizabeth Montgomery is helping out Santa, while adding some sex appeal in the process: 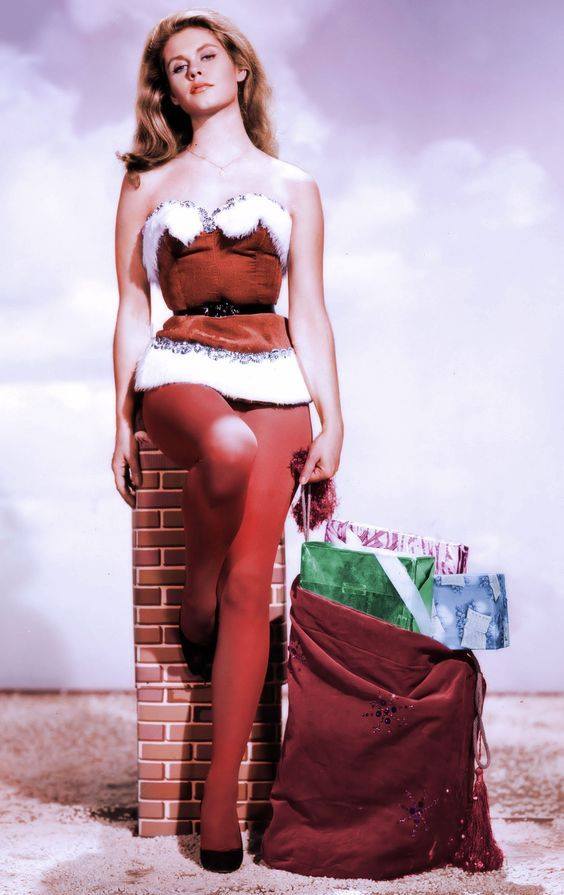 If Samantha is here, can Jeannie be far behind? Here's the lovely Barbara Eden in publicity for a 1993 Bob Hope holiday special: 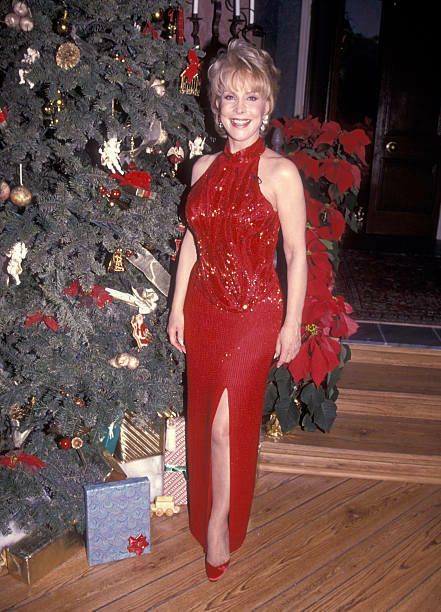 Statuesque stunner, FB friend and Lombard fan Julie Newmar, whose credits range from "The Twilight Zone" to "Batman" and scores of other series, films and stage shows, adds her uniquely sultry touch to the holidays: 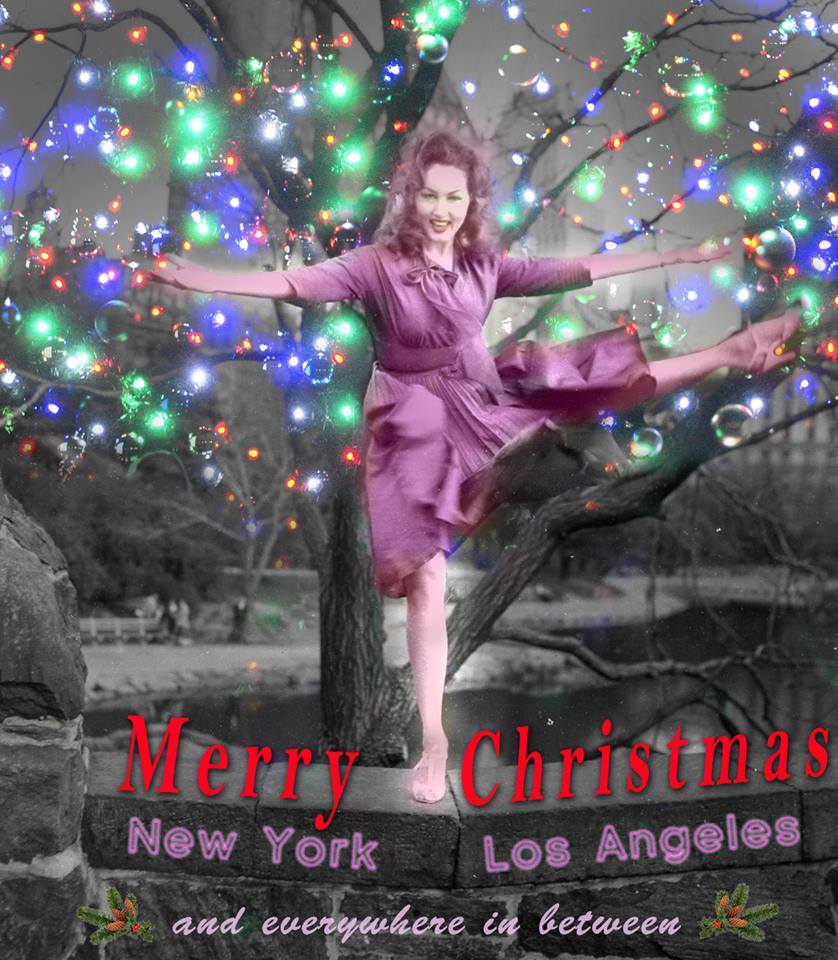 Here's hoping you have a wonderful holiday...and Carole does too: 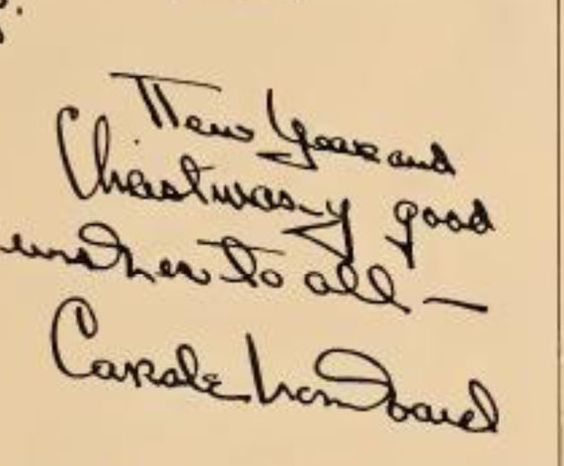