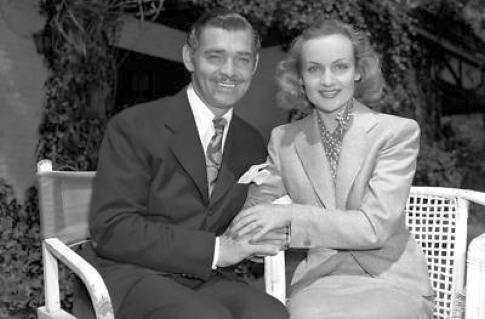 The particulars of the marriage between Carole Lombard and Clark Gable on March 29, 1939 have led to confusion, legend and just plain falsehood. We know they wed in Kingman, Ariz., and met the press at their soon-to-be home in Encino on March 30. (The photo above was snapped on that day.)

But how'd they manage the wedding with such airtight secrecy? As one of the world's most talked-about couples -- imagine Brad Pitt and Angelina Jolie, only amplified tenfold in a society where film stars were viewed as nearly godlike -- Gable and Lombard were under intense scrutiny.

First, they were smart enough to elope while much of the Hollywood press was up the coast in San Francisco, attending the world premiere of "The Story of Alexander Graham Bell." (Thank you, Don Ameche.) Then, according to Frank Bennett, who has interviewed "Screwball" author Larry Swindell, photographer John Engstead and Carole's brother Fred Peters (the latter two are now deceased),

"Their trip to Kingman was fast, there and back, only with quick stops for gas and a breakfast coming back. They took Otto's [Winkler] little black coupe, since the Gables' [vehicle] was a bit high-end." (Otto Winkler was an MGM press agent and friend of Gable's. He would die with Lombard and her mother in the plane crash in Nevada on Jan. 16, 1942. He is seen below with Clark and Carole, probably on March 30.)

"Contrary to popular belief, they did not stay in some hotel -- I heard this direct from Larry Swindell."

In other words, all the talk about the couple honeymooning at the Oatman (Ariz.) Hotel is so much bunk. There also has been talk that their first night as husband and wife came at the now-demolished Boulder Inn in Boulder City, Ariz., but according to Bennett, Swindell told him that was a "diversion" and they drove back to the ranch as soon as vows were exchanged. Bennett added this:

"Fred Peters said none of them [Carole's mother or two brothers] knew of the plans. He'd spoke to Carole the evening before they left and all was normal. He didn't know anything until his mother called late the next day with the news, and that the newlyweds would arrive home after midnight, rest, and do a press conference the next morning."

So the morning of the 30th, much of the Hollywood press who were stationed in San Francisco saw this over breakfast: 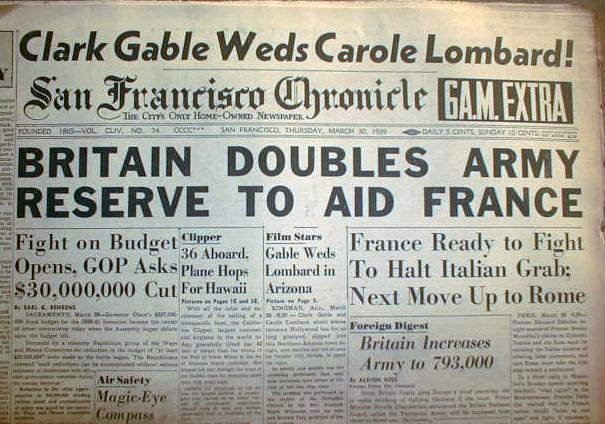 Oh, and Engstead told Bennett not to mention Gable's name to Peters. Enmity between the families still lasted decades later.