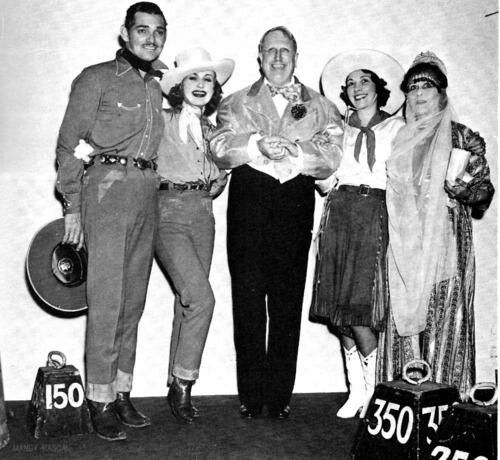 Even before Carole Lombard posed for this costume party pic in April 1937, she knew William Randolph Hearst, at center. Not only did she visit his majestic castle (which he always called "the ranch") at San Simeon several times, but as a teen in the mid-1920s and a beginner to acting, Carole dated one of his sons. (Had that pairing led to marriage, and had socialite Millicent Hearst divorced her husband -- thus allowing him to wed Marion Davies -- she and close pal Carole might've been legally related!)

OK, so that didn't happen, but Lombard long was a favorite of the Hearst press, always helpful for anyone in Hollywood. (Well, maybe not for Davies, whose incessant praise from his publications hindered genuine appreciation of her talent for decades, even though her work garnered much approval from non-Hearst media.) Columnist Louella Parsons was a booster of Carole's -- although like many other stars, she had to balance Parsons' support with that from rival columnist Hedda Hopper -- and Hearst newspapers promoted Lombard's screen work. 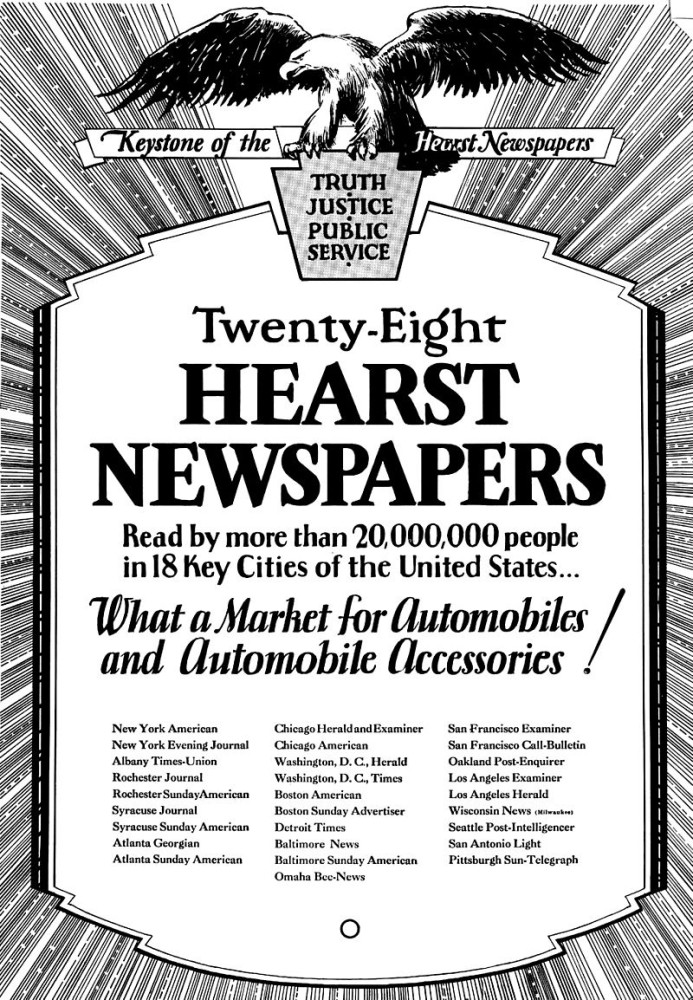 But while Hearst then was primarily associated with newspapers, they were only part of his media empire. His company ran a number of magazines, which it's better known for today than its newspapers; while its properties today include the San Francisco Chronicle and Houston Chronicle, the lone direct link to W.R.'s ownership is the Albany Times-Union. (Above is a trade ad from about 1930 promoting Hearst newspapers as a vehicle for automobile advertising.) Notable magazine titles under the Hearst banner include Car & Driver, Good Housekeeping, Town & Country and Woman's Day.

Hearst's most famous magazine was Cosmopolitan (a name he also would use for his film production company that produced Davies' films and a wide range of other titles). Today, we think of "Cosmo" as a racy female-oriented publication, with covers such as this one (Hilary Duff, from this past February): 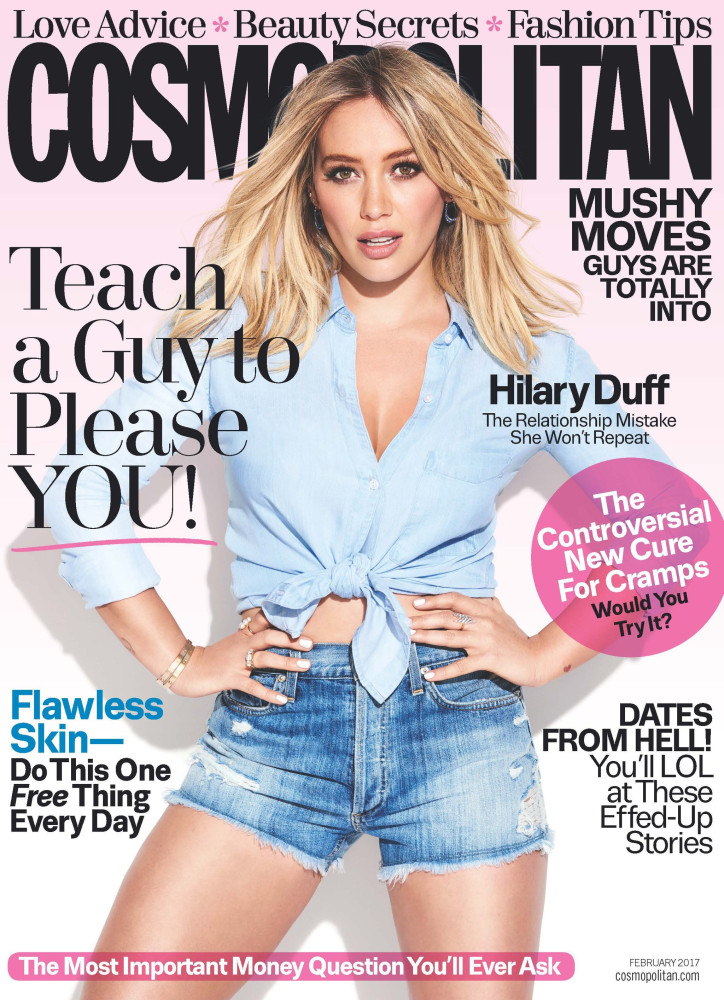 It may surprise many to learn that Cosmopolitan once had a substantially different image. Its history dates to 1886 as a family magazine with a literary tone; H.G. Wells' fabled "The War of the Worlds" story was serialized in the magazine in 1897. Hearst bought the property in 1905, and its contributors would later include Sinclair Lewis, George Bernard Show, O. Henry and Upton Sinclair. Still a general-interest publication in the 1930s, its circulation then was 1.7 million.

Which is where Lombard comes in.

Long a favorite of movie magazines, Carole was a cover subject of other mags too, including True Confessions and Physical Culture. And the November 1935 issue of Cosmopolitan was graced with Lombard on the front: 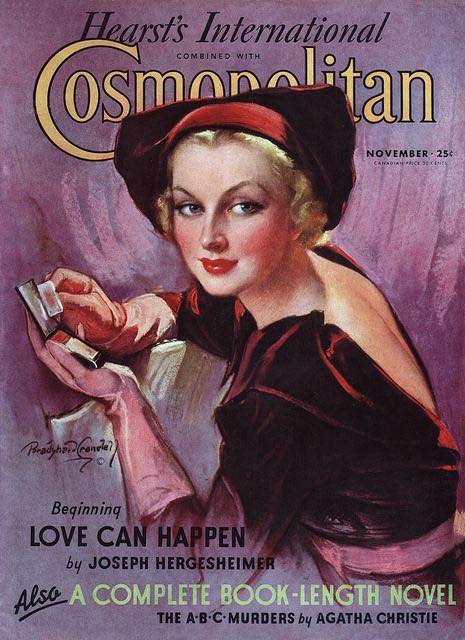 As Cosmopolitan isn't among the magazines that are part of the Media History Digital Library, I had no idea it featured Lombard on a cover.

The artist was Bradshaw Crandell (1896-1966), a well-known illustrator of the era who designed covers for magazines such as The Saturday Evening Post, Collier's and Physical Culture. The Lombard cover was among his first for Cosmopolitan; he'd work for it through 1940, with another stint from 1944 to '46. Other star cover subjects of his included Olivia de Havilland, Joan Fontaine, Judy Garland, Bette Davis and Lucille Ball. Crandell is a member of the Society of Illustrators Hall of Fame.

But getting back to that cover, here's how this pastel looked: 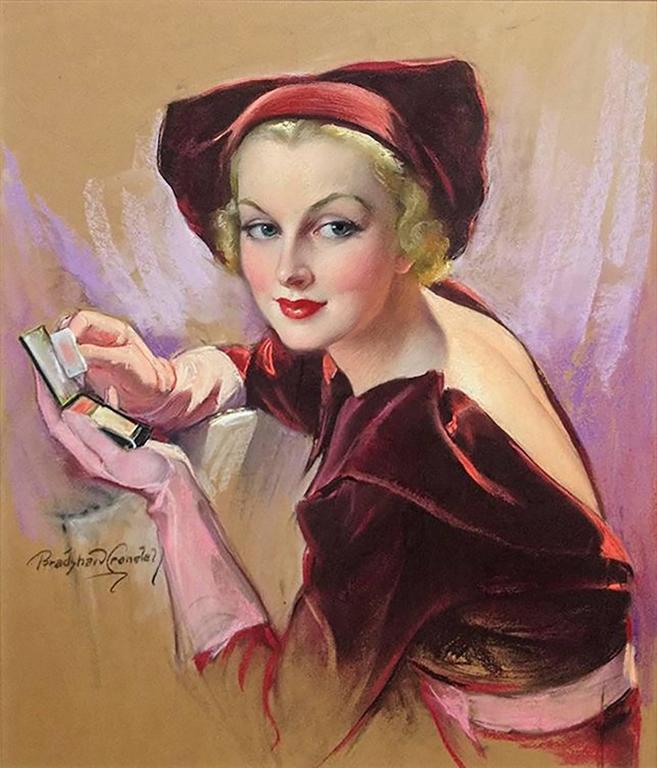 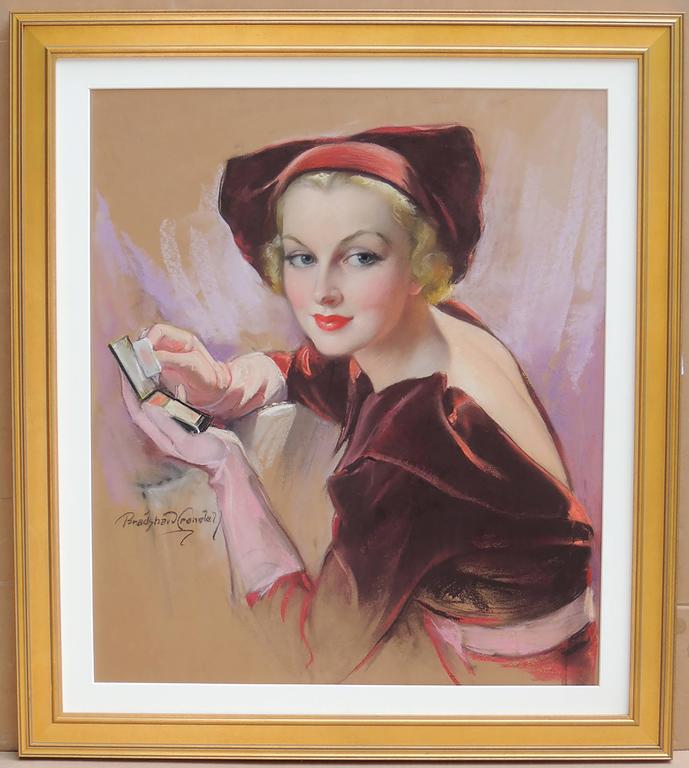 As you can see, it's in excellent condition, and is available through 1stdibs.com. That's the good news. The bad news for mortals such as us is that the asking price is $18,150 (though by using the code "SAVE15," you can knock 15 percent off). If you have that money to spend and are interested, 1) I envy you, and 2) go to https://www.1stdibs.com/art/drawings-watercolor-paintings/portrait-drawings-watercolors/bradshaw-crandell-carole-lombard-holding-compace-cosmopolitan-magazine-cover/id-a_1469693/?utm_content=test&gclid=EAIaIQobChMIiJaJ1dyR2AIVj1x-Ch0RswYwEAkYASABEgJsSfD_BwE&gclsrc=aw.ds#0.

As for Cosmopolitan? The version of the magazine we now know began when Helen Gurley Brown (author of "Sex and the Single Girl") took over as chief editor in 1965. Brown refashioned the faltering mag into one for modern single career women (one can imagine Mary Richards having it sent to her Minneapolis residence in the 1970s). Brown, editor-in-chief until 1997, believed women were entitled to enjoy sex without shame, a tone the magazine continues today, five years after her passing at age 90.
Collapse