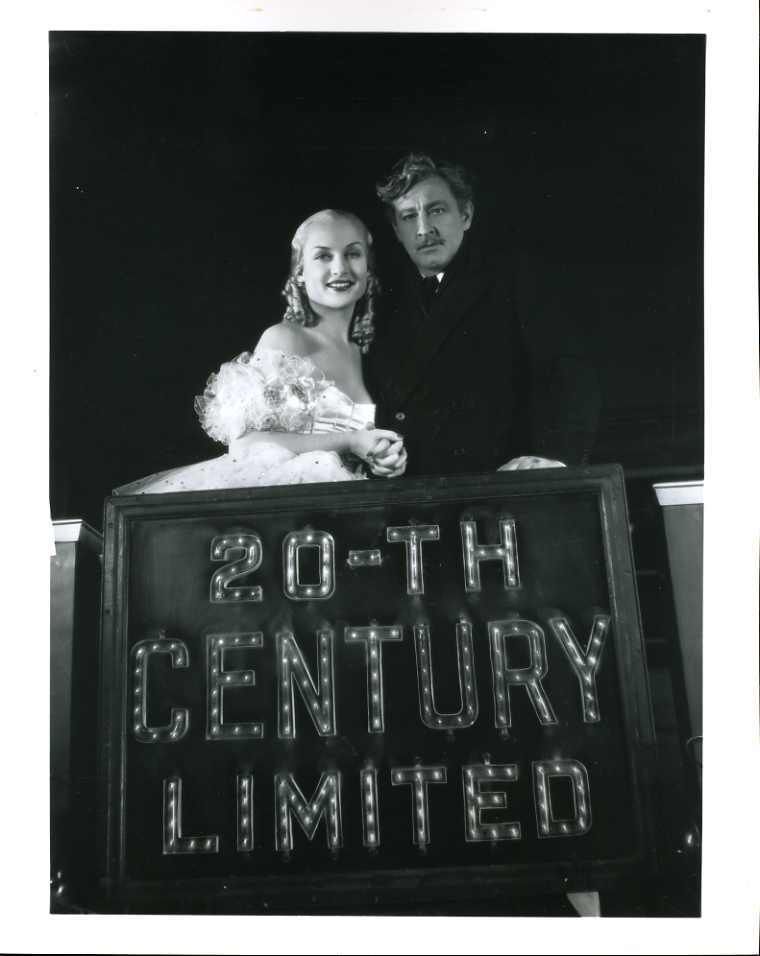 Beginning with "Twentieth Century" in 1934, Carole Lombard brought a new, assertive style to female comic acting, and influenced subsequent generations of actresses. One of them turns 72 today. 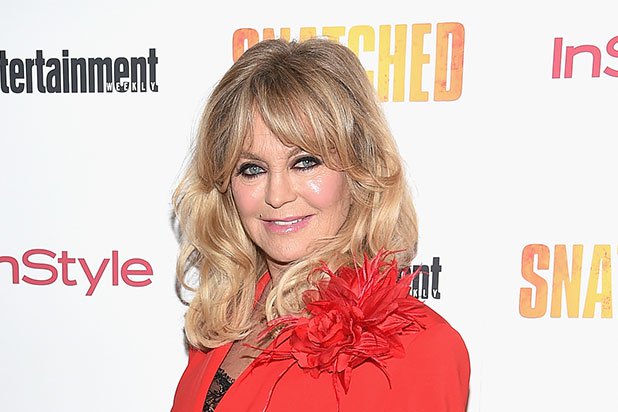 Goldie Hawn ended a 15-year sabbatical from films this spring with a supporting role in the Amy Schumer vehicle "Snatched." (She's been working on an array of philanthropic projects in recent years.) She's had significant influence too -- a remake of one of her signature movies, 1987's "Overboard," will be released next year starring Anna Faris, another in the Lombard-Hawn comedic tradition. But there's a twist: Faris, knowing that redoing Goldie's role would be self-defeating, instead plays Kurt Russell's handyman character, with Eugenio Derbez of "How To Be A Latin Lover" fame as the wealthy playboy who develops amnesia. (Another upcoming remake, "Splash," is taking the same gender-swap approach.)

On her podcast last month in the wake of the burgeoning #MeToo movement, Faris noted sexual harassment at the hands (literally) of the director of an earlier movie, saying he slapped her on the rear and made her "feel small." Goldie has also experienced unwanted work-related sexual advances and detailed it in her 2006 autobiography, then told it again this past May. Now is a good time to revisit that story, but to put it in context, you have to know some comic strip history. 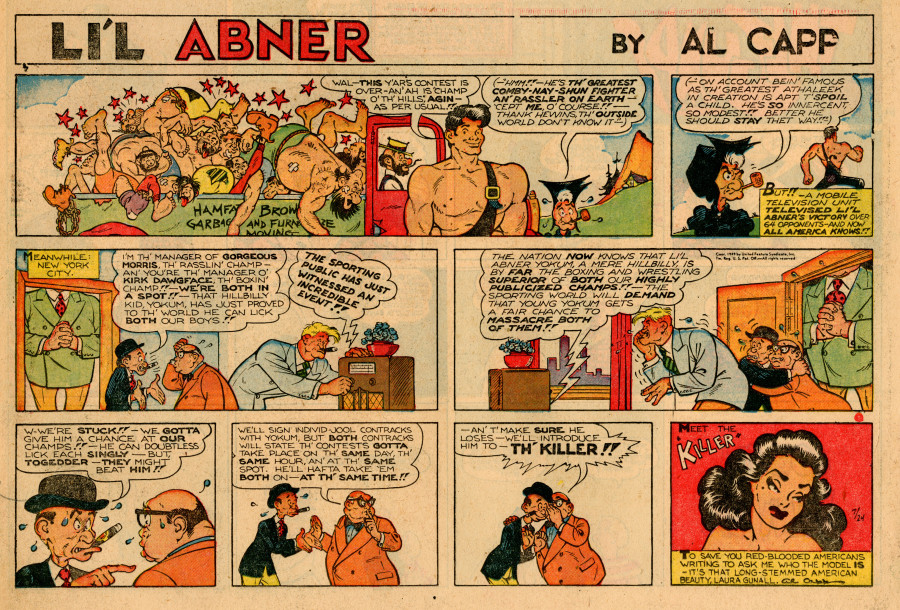 "L'il Abner" (above is its Sunday strip from July 24, 1949) was revolutionary, arguably the first genuinely satirical comic strip. Hugely popular, it began in 1934 and ran for several decades, appearing in more than 900 newspapers at its peak, read by one-third of the American population. It inspired a '50s Broadway musical whose cast included two future TV notables, Julie Newmar (left) and Tina Louise. (Facebook friend Newmar reprised her role in the 1959 film adaptation.) 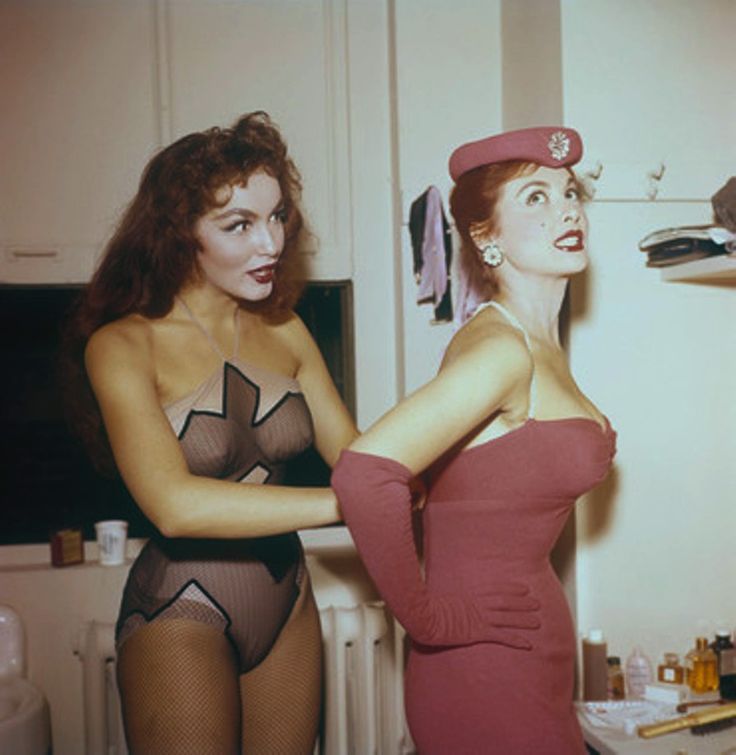 The man behind the Dogpatch characters was a cartoonist named Al Capp, who like Charles Schulz ("Peanuts") and Garry Trudeau ("Doonesbury") would grow wealthy and gain fame of his own. Capp's humor was in the Jonathan Swift tradition with some dark overtones; he lost a leg in a trolley accident at age nine. Capp satirized many public figures over the years. Among the first was Frank Sinatra, who to Capp's surprise was thrilled with being parodied as "Hal Fascinatra." 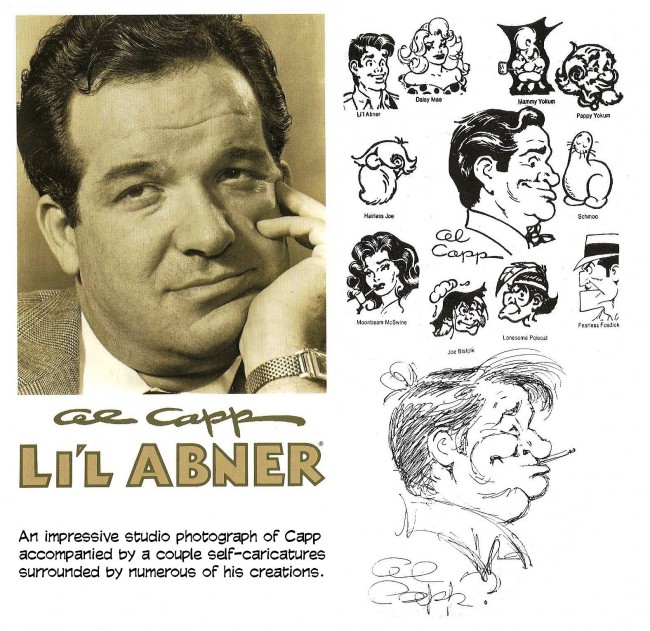 Capp was active in helping the disabled during and after World War II, then spoke publicly against Red-baiting Sen. Joseph McCarthy. Well known to the public, Capp had a weekly newspaper column and was a contributor to programs such as NBC radio's "Monitor." But by the 1960s, much (though not all) of Capp's satire was aimed at the left.

Enter Goldie Hawn, 19, a college dropout from Takoma Park, Md., just over the Washington, D.C. line, dancing in various venues (including the World's Fair) in the New York metropolitan area. 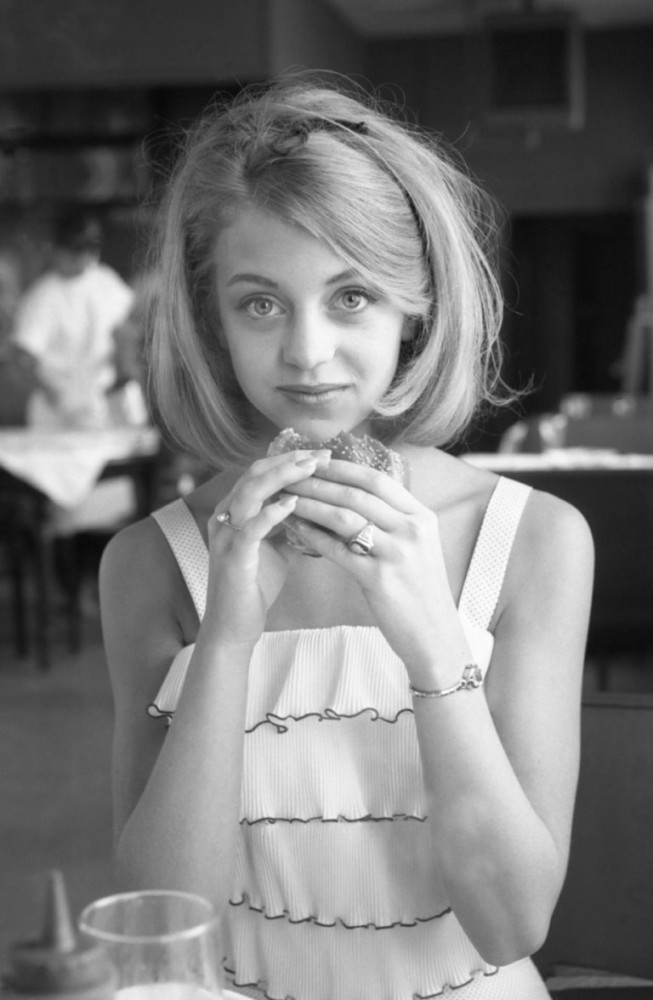 According to Hawn, she visited Capp's office in 1965 seeking work acting in one of his productions, and he entered the room in what we shall term rather unprofessional attire:

"He disrobed, he took off his business clothes and came in in, like, a dressing gown. I got the picture there, and I thought, 'I'm in trouble. Where's the door?'"

Capp gave Hawn an acting note that made her more at ease, soon contradicting that by sitting next to her.

In another account of this incident, Hawn said Capp opened up his dressing gown, revealing his penis. Livid, he reportedly told her, "Well, you're never going to get anywhere in this business, you should go home and marry a Jewish dentist." (Goldie is half-Jewish.)

If living well is the best revenge, Hawn got it in a big way. By decade's end, she had become a TV star on "Rowan and Martin's Laugh-In" and began a substantial film career in the adaptation of the Broadway hit "Cactus Flower," for which she would win an Academy Award for best supporting actress in April 1970. She wrote Capp a note saying she "didn't have to go marry a Jewish dentist." 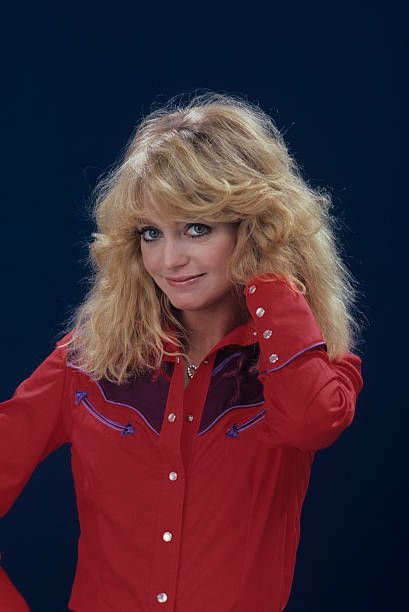 Goldie tells of the incident at https://www.thewrap.com/goldie-hawn-recalls-casting-couch-moment-al-capp-19/.
Collapse