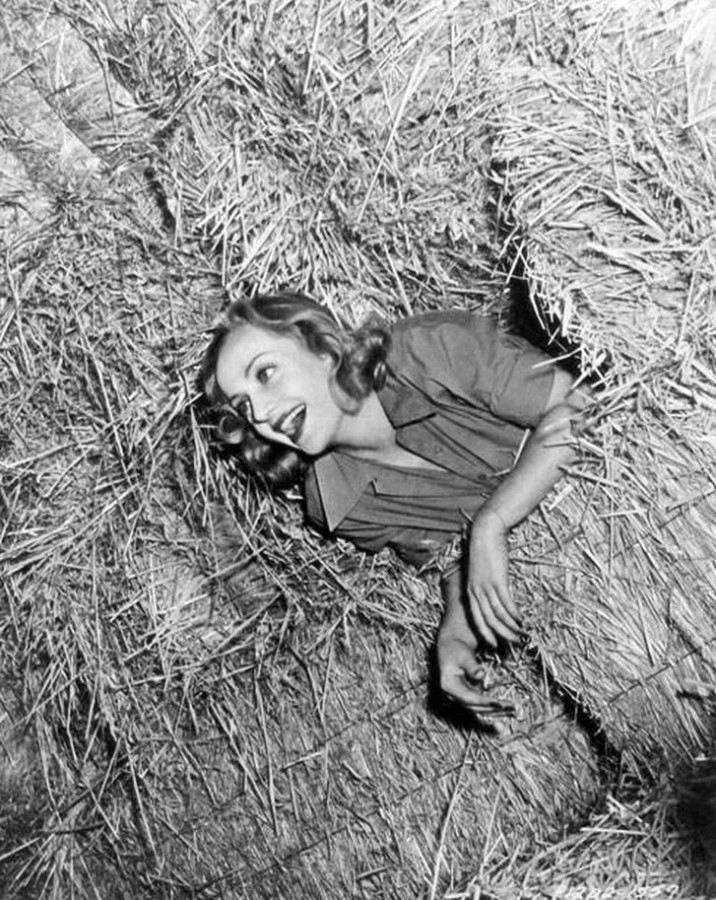 Isn't that a delightful photo of Carole Lombard, surrounded by hay, said to be from 1937? I wasn't aware of its existence until I saw it the other day at a new Facebook site dedicated to Carole.

It's called "Carole Lombard Tribute" (https://www.facebook.com/pages/Carole-Lombard-Tribute/726186560834704?fref=ts), and is the creation of my Faceboook friend Crystal Kalyana Pacey, whom I met late last year when she visited Los Angeles from her native Australia. She's received some help from the hosts of two other FB sites, "When Hollywood Was Golden" and "Clark Gable: When Hollywood Was Golden," who designed this header for her:

As of this writing, the site has received 408 likes in but one week of operation, a solid debut. They've uncovered several gems, such as this one:

We've run several images of Carole in that outfit that dates from 1933, but now we know more about it -- this is presumably from a snipe on the back of the photo: "Carole Lombard sporting a new grey suit which follow the lines of a man's Prince Albert coat. The waistline is high and slit in the back, which runs from hemline to waistline. The hat is a chechia model in grey straw. Carole actually designed this dress herself [emphasis ours]." An impressive find.

To be fair, there are other Lombard-related addresses at Facebook, such as "CAROLE LOMBARD !!!" (https://www.facebook.com/groups/421288827952473/), a group with nearly 1,200 members; the fan page "The Films of Carole Lombard" (https://www.facebook.com/carole.lombard.fanpage?fref=ts), whose membership exceeds 3,400; and several more. All are doing splendid work in perpetuating Lombard to the public, and more power to all of them.
Collapse