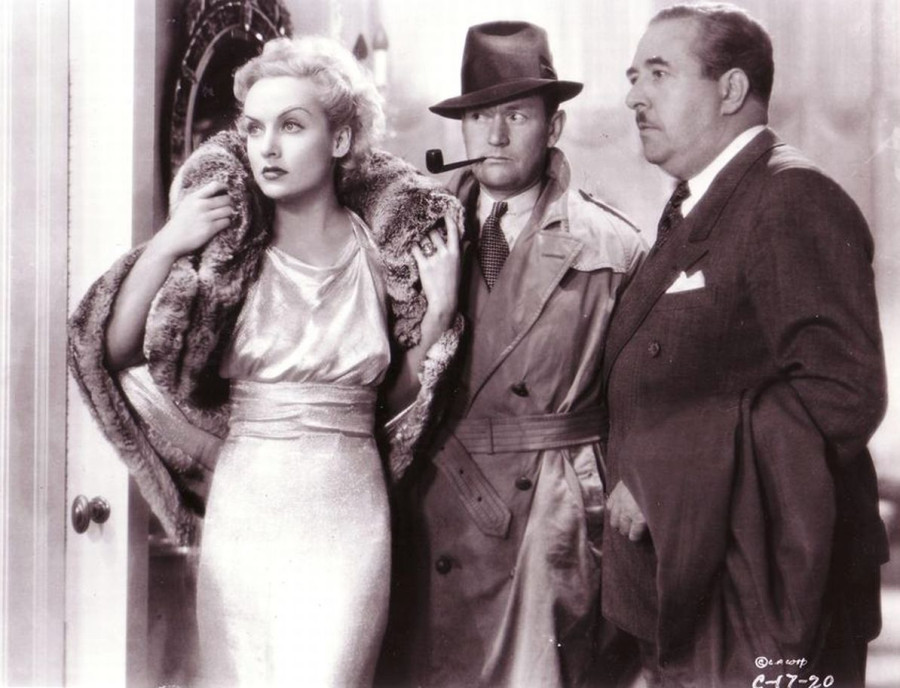 Among the joys of classic Hollywood is watching its able corps of character actors cavort with the likes of Carole Lombard. We've previously discussed Walter Connolly, at right, from "Twentieth Century" (http://carole-and-co.livejournal.com/647552.html), but the man in between them, Roscoe Karns, also had a substantial career.

The fast-talking Karns had so much New York sass on screen most filmgoers probably wondered which borough he hailed from. The answer: None. He was born (in 1891) and raised in San Bernardino, long before Los Angeles would become recognized as a cinematic capital. Karns appeared in eight shorts during the teens, then worked his way up the movie hierarchy during the 1920s, including a part in "Wings," the first Academy Award-winning film.

The arrival of sound unveiled a new dimension to Karns and bolstered his career. (Turner Classic Movies occasionally runs a 1929 short called "Copy!", where he plays a city editor -- most of his scenes are spent talking on the phone -- in a tour de force.) The following year, Karns crossed paths on screen with Carole for the first time in her initial Paramount feature, "Safety in Numbers," and as the decade progressed, he appeared in several notable films, including "Night After Night" (Mae West's movie debut) and the multi-episodic "If I Had a Million." (He's also the radio announcer broadcasting a bridge match -- you read that correctly -- in the Loretta Young comedy "Grand Slam.")

But it wouldn't be until 1934 that Karns would make his two most memorable movies, both at Columbia -- first as the obnoxious Shapeley, Clark Gable's bete noire, in "It Happened One Night," then as press agent Owen O'Malley in "Twentieth Century." Here he is with Lombard's Lily Garland, who at this point in the film is getting a bit too big for her britches (probably from emulating mentor and lover Oscar Jaffe):

In the early '40s, Karns appeared in the likes of "His Girl Friday," "They Drive By Night" and "Woman of the Year." With his film work diminishing after World War II, he made the transition to television, with a supporting role on the sitcom "Hennessey" and a 1963 appearance on "The Lucy Show." His swan song came in films in 1964, once again working for Hawks (as he did in "Twentieth Century" and "His Girl Friday") as Major Phipps in "Man's Favorite Sport?" He died in 1970.

The photo just above the preceding paragraph is on sale at eBay for $22, although you also can make an offer. It's in very good condition, though there is a long crease across the top of the photo. Interested? Then visit http://www.ebay.com/itm/Vintage-1930s-Promo-Photograph-CAROLE-LOMBARD-ROSCOE-KARNS-20th-Century-Film-/161651031519?pt=LH_DefaultDomain_0&hash=item25a326fddf.

If you're going to the TCM Classic Film Festival (and I note from KNX radio traffic reports that part of Hollywood Boulevard has been closed to traffic to handle the visitors), I hope to see you tonight at 10 for "My Man Godfrey" at the Chinese Multiplex House 1. Even if you've seen it countless times (as I have), watching it with an audience and sharing in the laughter is a splendid experience.
Collapse