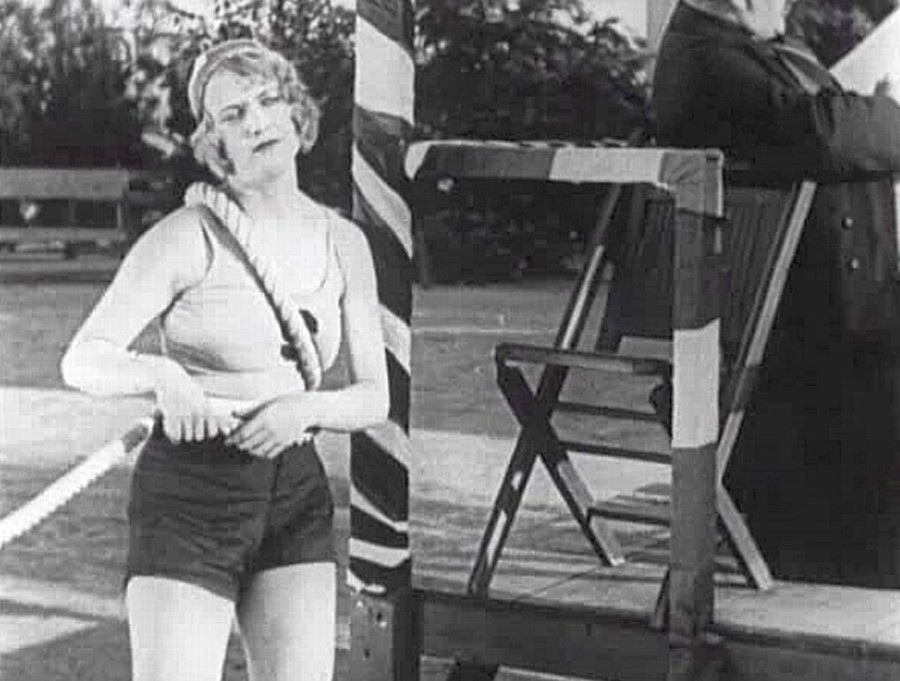 Did Carole Lombard look good in shorts? From the photo above, probably yes...though the gal looks so doggone tired.

Oh, you're referring to another sort of shorts, the type Lombard didn't wear but merely performed in -- the two- or four-reelers she appeared in for Mack Sennett from 1927 to 1929. We'll get sort of an answer to that question, among others, in a blogathon hosted by my friend Fritzi Kramer of the blog Movies Silently (http://moviessilently.com/2015/03/20/announcement-shorts-a-tiny-blogathon). OK, so the above pic is actually from a feature, Marion Davies' "The Fair Co-ed" (1927, with Marion at right) -- but they're wearing shorts. Get it?

From the pics I've run here and the sponsoring blog's title, you may get the impression that this is limited to silent-era releases. Take my word, that isn't the case. According to Fritzi, any film under 40 minutes made before 1970 and getting a theatrical release is eligible...which gives potential entrants a world of films to choose from. Shorts made outside the U.S. are welcome too -- no clothing tariff here. (OK, no more puns about shorts.) As Fritzi notes, "Comedy, drama, live-action, animation, documentary, indie or mainstream… If it tells its tale in the short format, I want it."

If I wasn't writing on the Lombard short "Run, Girl, Run" (1928) -- something I feel obliged to do given this blog's title, and you certainly can write about one of her other Sennett shorts if you so desire -- I might have chosen one of Harold Lloyd's shorts, such as the brilliant "Get Out and Get Under" (1920, shown below with future "Our Gang" member "Sunshine Sammy" Morrison).

As of this writing, none of Max Fleischer's clever Betty Boop or Popeye cartoons or Walt Disney's groundbreaking Mickey Mouse 'toons have been taken (a true shame, because Mickey should be remembered not as a corporate logo but as a delightful animated character). "One Week" and "The Music Box" have been claimed, but there's plenty else from Buster Keaton and Laurel & Hardy to examine, not to mention Charley Chase, the Three Stooges and others. How about Frank Sinatra's 1940s call for tolerance, "The House I Live In"? Short comedies from Robert Benchley, Pete Smith specialties or James A. FitzPatrick's TravelTalks? The possibilities are endless -- check out TCM fare in between its features for inspiration.

Are you a blogger who's still stumped? Fritzi can come to your rescue. As she notes, "Give me a date range and I will play Shorts Roulette for you, giving you a title and a link to a random public domain short on archive.org or YouTube." Now what could be easier than that?

Good things do come in small packages, as Kristin Chenoweth has proven for years. So don't shortchange yourself -- join in this blogathon.
Collapse