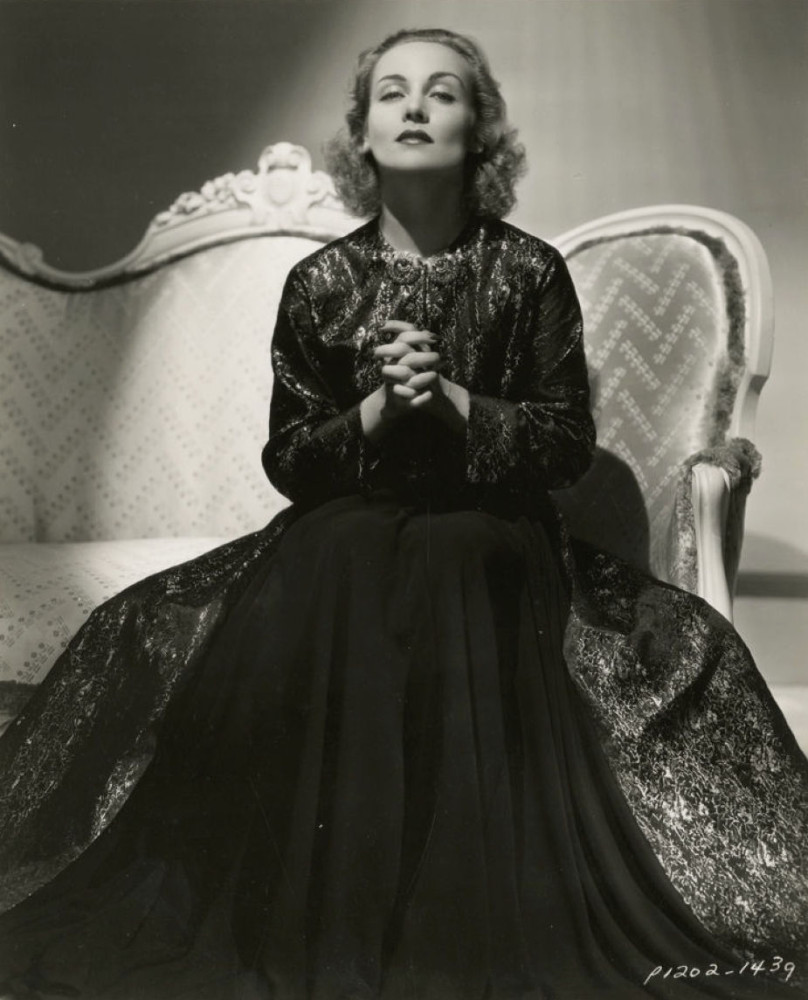 As many Carole Lombard fans know, p1202 was the player number Paramount assigned her for publicity shots, usually solo assignments and often not immediately related to a film she was making at the time. The photo above, p1202-1439, is a new pose for my collection, and I'm delighted to share it with you.

Many of these images feature a snipe or other printed information from Paramount on back that give us a better explanation of what this photo signified; alas, no luck regarding that here. Instead, we have this: 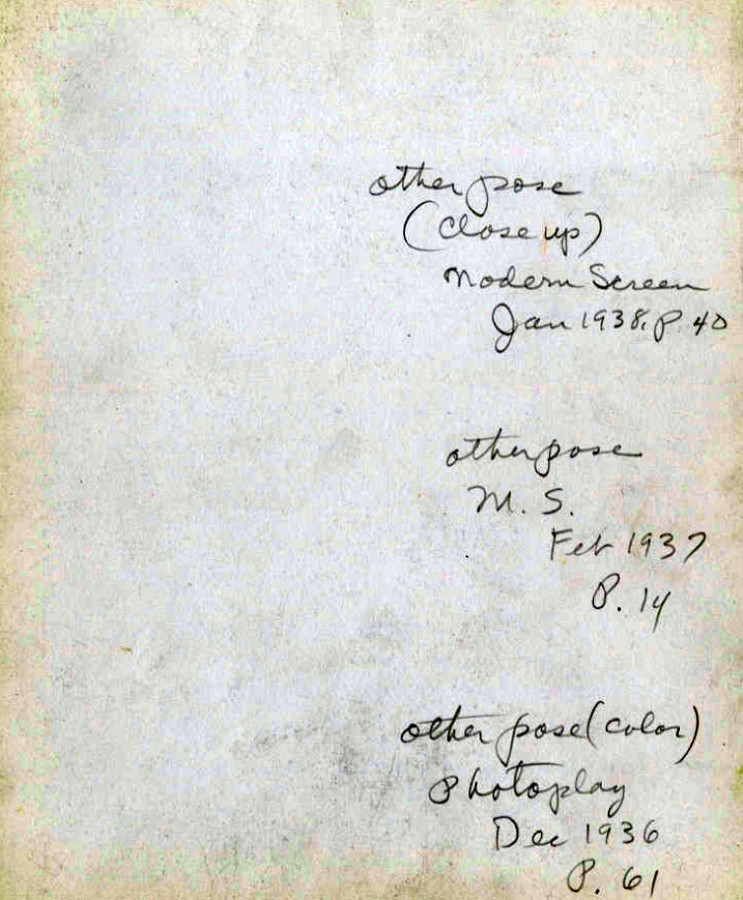 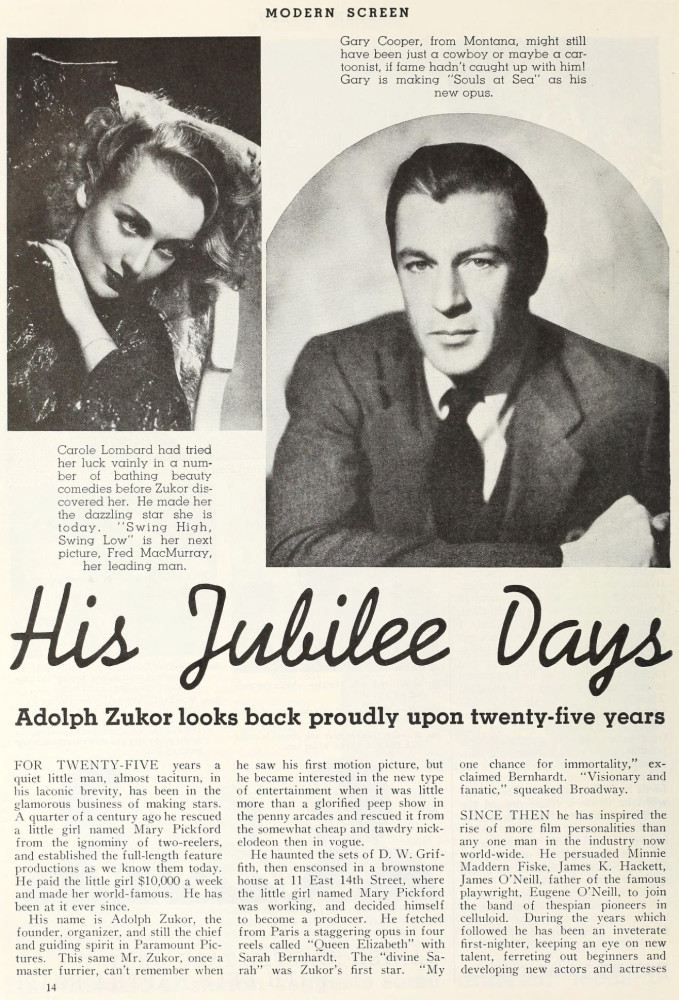 (Attention, Modern Screen: Had you been Pinocchio, your nose would have grown past Jimmy Durante proportions based on what you wrote about Adolph Zukor. While he's among the more admirable of moguls, he frankly had next to nothing to do with his studio signing Lombard.) According to the seller, this is "A magnificent Hollywood regency portrait shows a commanding and irrepressibly beautiful Lombard wearing the fantastic fashions of Travis Banton in a decadent black ball gown. The images from this photo shoot were published several times in Hollywood magazines including twice in Modern Screen magazine and a gorgeous, John H. Doolittle colorized image in Photoplay magazine.*

"Measures 7 3/4" x 9 3/4" with margins on glossy, double weight paper stock. There are handwritten notations in pencil on verso indicating the magazines in which images from this photo shoot appeared in."

*The Photoplay caption indicates that Doolittle's shot was a "natural color photograph." The process did exist at the time; in fact, in its April 1936 issue, Photoplay ran another true color Doolittle photo of Carole: 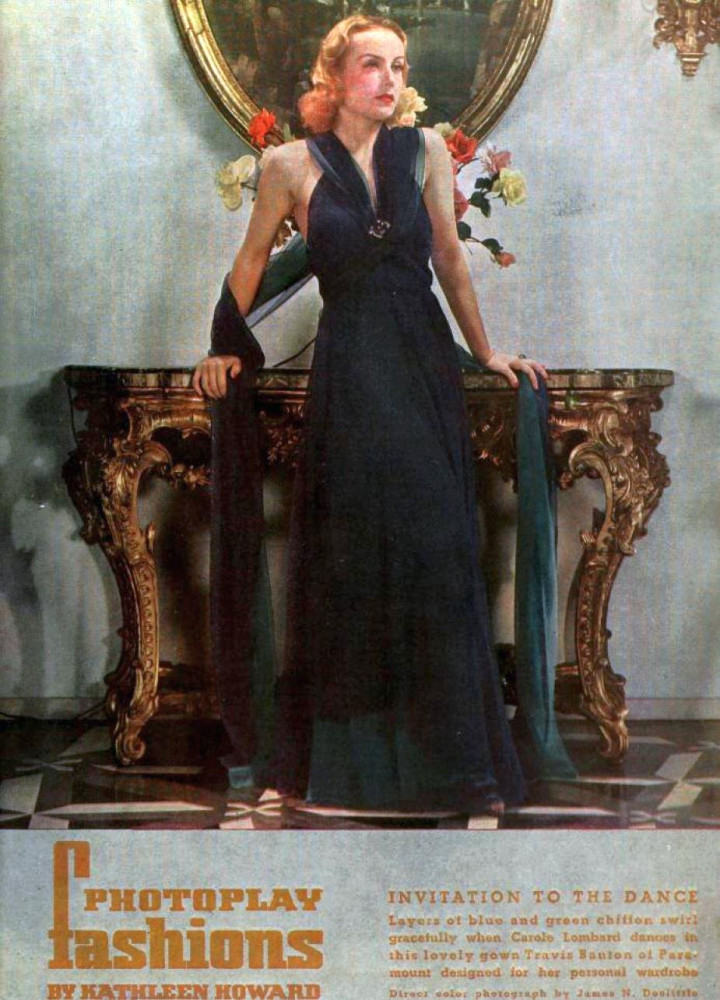 Expect bidding on this Lombard-Banton rarity to go through the roof; eight bids, topping at $31, have been made as of this writing, and the auction isn't scheduled to close until 9:54 p.m. (Eastern) March 25. If you'd like to see if you can capture this gem, go to http://www.ebay.com/itm/Carole-Lombard-Vintage-1936-Art-Deco-Glamour-Photograph-Travis-Banton-Fashions-/231412769824?pt=LH_DefaultDomain_0&hash=item35e146a420.

Our latest Lombard LiveJournal header from Paramount is p1202-623, a white-on-white experiment that probably has turned up in better condition somewhere.
Collapse