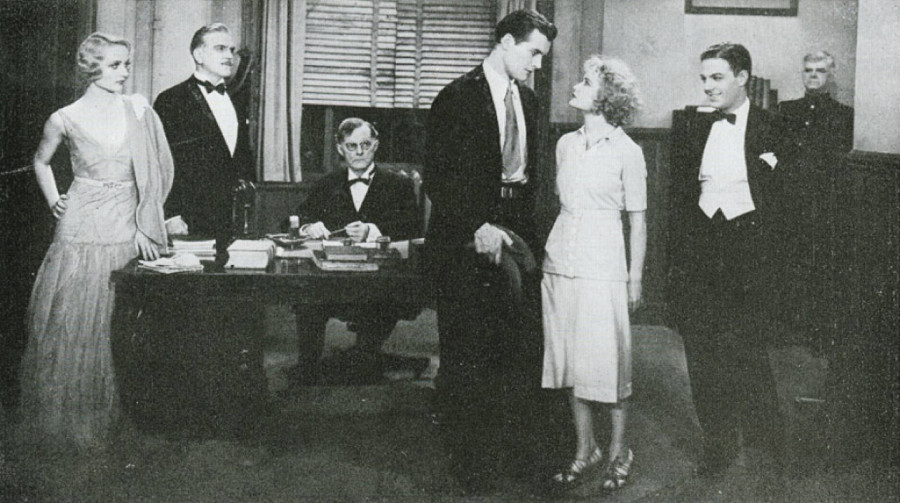 Above is what may be a rarity -- as far as I know, the only image showing Carole Lombard and Miriam Hopkins in the same photo; it's from "Fast And Loose" (1930), the lone film they made together, and an appropriate way to begin this entry in this weekend's Miriam Hopkins Blogathon: 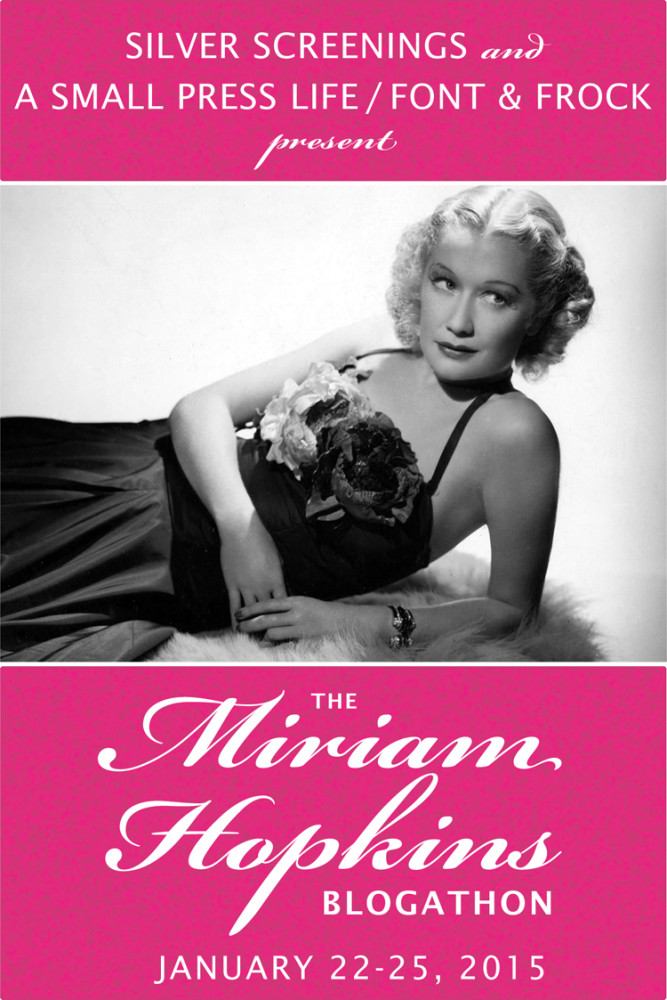 The event began Thursday (see first-day entries at http://silverscreenings.org/2015/01/22/day-one-miriam-hopkins-blogathon/) and continues through Sunday, as this extremely talented but often overlooked actress finally gets her due in the blogosphere.

The movie, shot at Paramount's studios in Astoria, Queens (Carole's only film in New York) isn't quite a classic but has more than its share of merits. Others in the cast included character actor par excellence Frank Morgan (second from left), nearly a decade before his most famous performances in "The Wizard Of Oz" and "The Shop Around The Corner," and future western star Charles Starrett (staring down at Hopkins). Adding to the fun, much of the dialogue was written by Preston Sturges.

Lombard and Hopkins weren't the closest of chums, but nevertheless were on good terms -- somewhat remarkable considering that over the years, they were cinematic competitors. Especially early in her career, Carole (a Hollywood product through and through) envied Miriam for her talent, stage experience and Broadway pedigree; conversely, I have no idea whether the often-tempermental Hopkins ever envied Lombard for anything.

As it turned out, following "Fast And Loose," their casting paths crossed several times. Here are a few:

That's the outrageously charming "Jazz Up Your Lingerie" from Ernst Lubitsch's saucy "The Smiling Lieutenant" -- and had Lombard fulfilled her dream, it would have been her, not Hopkins, getting a singing lingerie lesson on how to win Maurice Chevalier's affections from Claudette Colbert, even doing a bit of "singing" herself (Colbert carries the song over Hopkins, and certainly would have done likewise over Lombard). But the odds were stacked against Carole from the start, and she probably knew it.

In 1931 Hopkins' resume was far stronger, and an esteemed director such as Lubitsch wanted to work with her. In contrast, Lombard -- who already idolized Lubitsch and was beginning a friendship with him on the Paramount lot -- still was perceived by many at the studio, Ernst perhaps among them, as a Mack Sennett refugee learning her craft. Finally, "Lieutenant" was shot on Hopkins' turf in New York (one of the final features filmed in Astoria before the ongoing Depression forced Paramount to shut down the facility).

Think you've stumbled into some weird alternate universe? Nope -- that actually ran as part of an ad in film trade publications, with Clark Gable starring with Hopkins in a Paramount production called "No Bed Of Her Own." (And yes, its source was a story by Val Lewton, later a director of 1940s horror films.) Of course, some things changed en route to the finished product, and the ad gives away one of those reasons...here, Hopkins is billed above Gable. That conflicted with a condition of MGM's loanout of Gable to Paramount (he was to be top-billed). Hopkins nixed the deal, Lombard pinch-hit for her, "No Bed Of Her Own" became "No Man Of Her Own" (many elements of Lewton's novel were simply too steamy, even for pre-Code, so an entirely new story was written), and director Wesley Ruggles got to oversee love scenes between Gable and Lombard, not Gable and Hopkins:

Keep in mind that when this was taken late in 1932, Clark and Carole were probably as enthused about each other in real life as Ruggles was watching them pitch woo.

As the 1930s progressed, both Lombard and Hopkins showed remarkable business savvy in setting up freelance contracts with studios, and they rarely contested for the same role. But in 1941, their paths crossed once more, and for that you can thank Jack Benny. 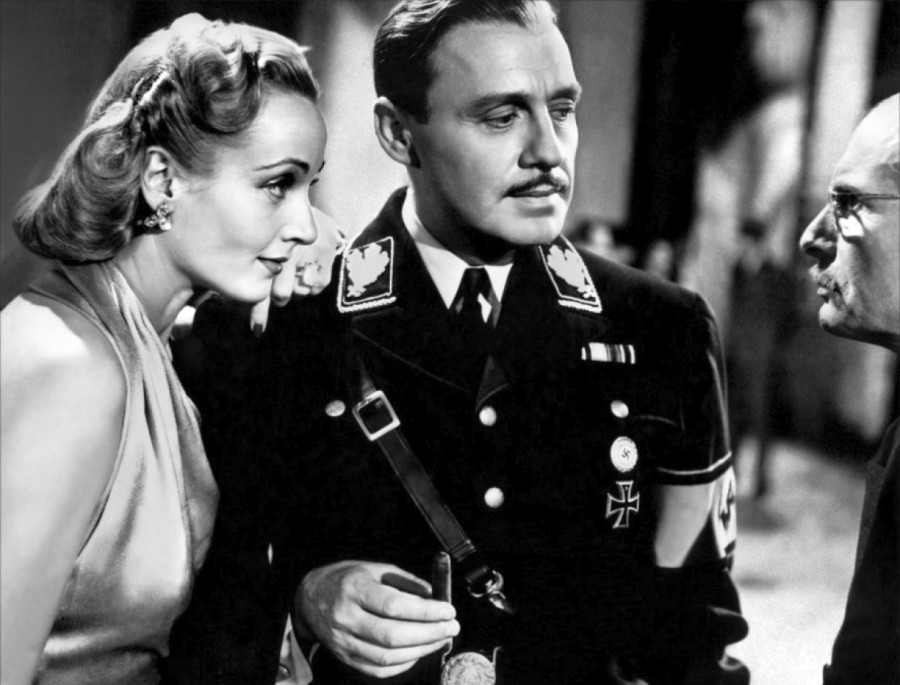 Lubitsch initially planned to have Hopkins (who had also been in his gems "Trouble In Paradise" and "Design For Living") star opposite Benny in his anti-Nazi dark comedy, "To Be Or Not To Be," but radio star Benny, thrilled to be in a film directed by Lubitsch, was less enthusiastic about working opposite the tempermental Hopkins. The director complied with Benny's wishes, replacing Hopkins with Lombard, who had long wanted to work with him. Carole also agreed to provide production money in return for part of its profits...which, as we all know, she never got to see.

A few days before her death, Lombard was in Chicago getting training from federal officials about her upcoming war bond rally in Indianapolis. She met Chicago Tribune photographer Mike Rotunno, who told her about an incident he'd had with Hopkins in mid-1941. Miriam had just walked off a production and flew to Midway Airport; Rotunno was told to meet up with her there. When Hopkins arrived, she refused either to speak to him or pose for a picture, apparently using some of the invective Carole was renowned for. He took a shot of the angry Miriam, and it ran in the Tribune the following day.

Upon hearing this story, Lombard laughed, and added, "Mike, I gotta tell you, before I came here I was with Miriam and she warned me, 'Be careful when you get to Chicago because there's a gangster photographer at the airport.'"
Collapse