Carole Lombard was one of several Hollywood stars renowned for their figures in mid-1937...so, when Screenland magazine assigned noted writer Dorothy Manners a story on stars and their diets for its September issue, it was only natural that Lombard was one of those consulted (as were Paramount cohorts Claudette Colbert and Marlene Dietrich, and MGM's Joan Crawford, Carole's old Cocoanut Grove dance rival): 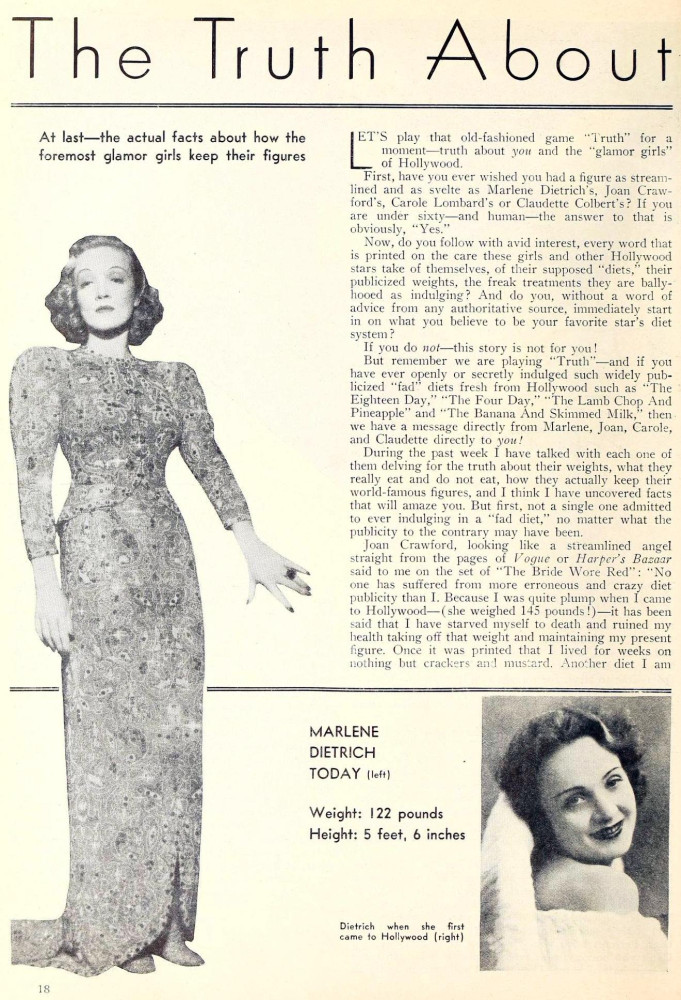 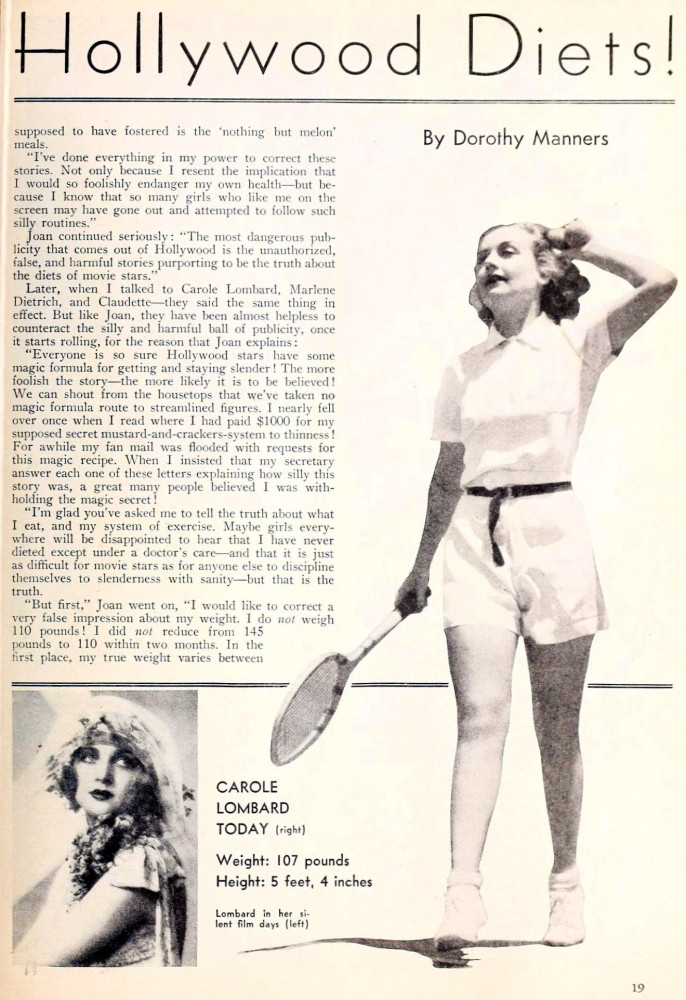 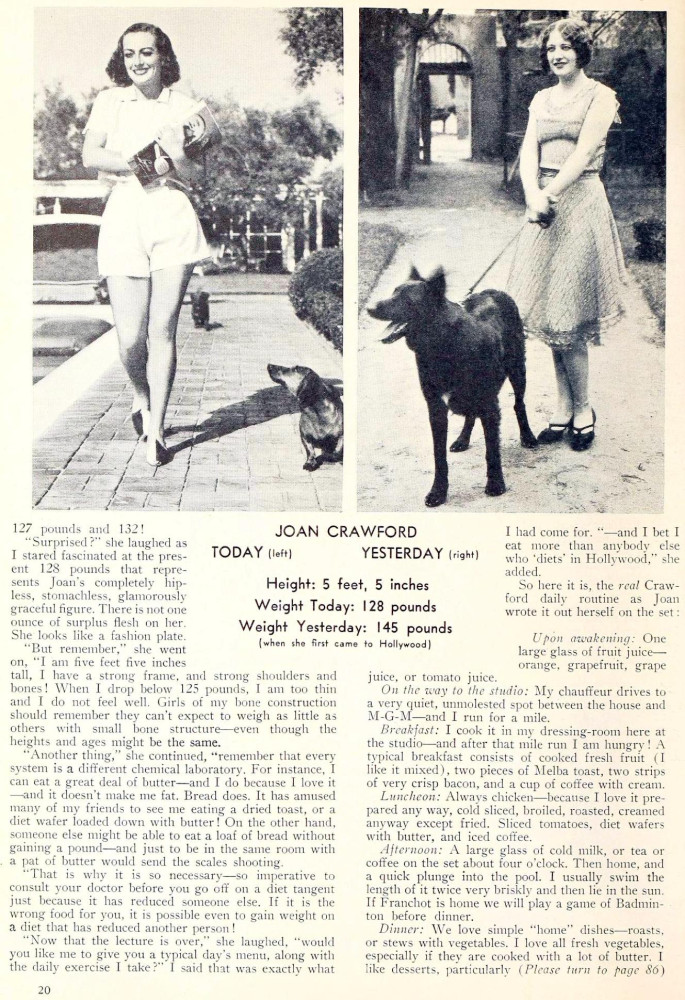 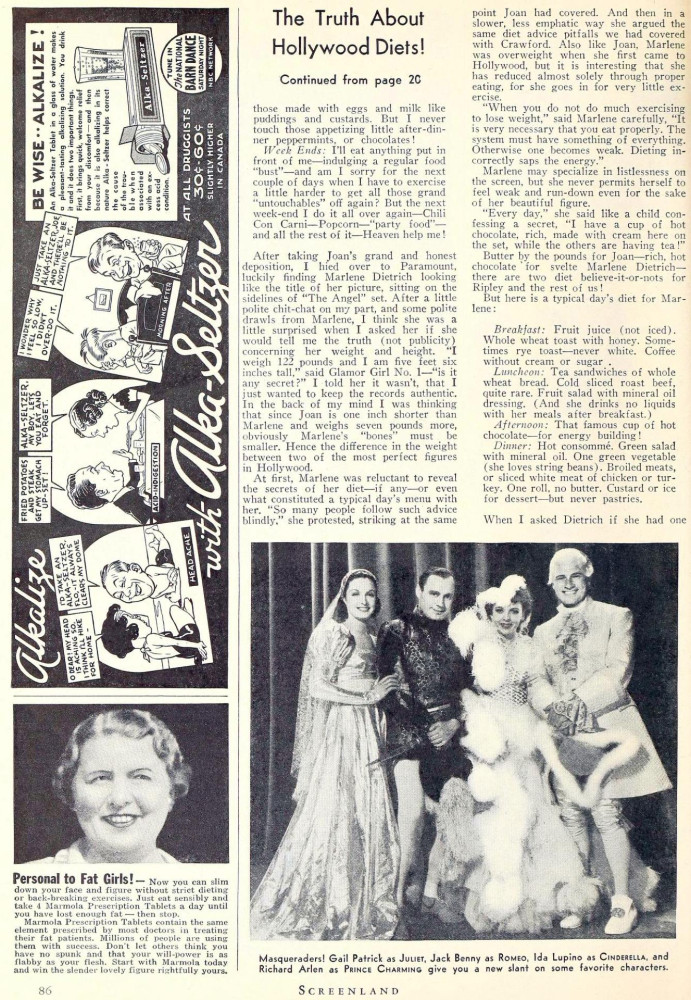 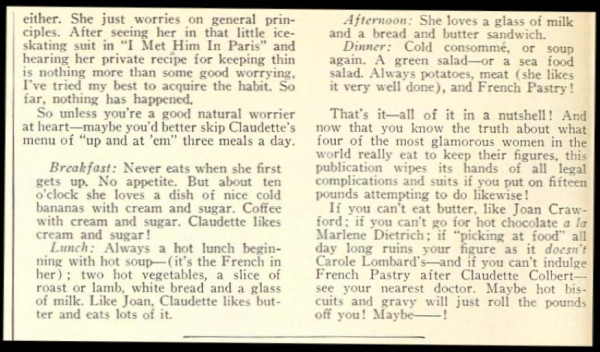 Oh, and I must commend Facebook friend Terry Welch for alerting me to this. She posted the first three pages this morning, told me where it was from...and it was on to the Media History Digital Library to examine the rest of the story, and upload highlights from the entire issue.

I'm particularly thrilled this article ran a hitherto unknown pic of Carole from silent days. Here it is, enlarged:

There was a "don't try this at home" tone throughout much of the piece, and Carole was especially insistent about this ("I'm scared of it! What I eat might kill somebody else."), but in short, her habits are no habits:

Nevertheless, she gave us a vague idea of the Lombard diet, and one of the surprises is that spinach was no longer part of it, several years after Carole had provided a recipe for spinach soup in a celebrity charity cookbook (http://carole-and-co.livejournal.com/469753.html). We also get yet another estimate of Lombard's height, courtesy of Manners -- "less than five feet, four inches." Just how much less, the author isn't saying; it could be anywhere from 5'3 3/4" down to 5'2".

Carole is a guest star of sorts in a somewhat humorous description of Claudette Colbert, party giver -- and while Lombard was briefly renowned for her parties a few years earlier, Claudette's were...well, let's simply say that if she ever watched "The Mary Tyler Moore Show" in the 1970s, she empathized with Mary Richards (although in the best MTM tradition, Colbert made it after all):

This was written by Elizabeth Wilson, one of Lombard's closest friends among the Hollywood fanmag corps.

The "Here's Hollywood" gossip column from the obvious pseudonym "Weston East" (a distant relative of Photoplay's "Cal York," perhaps?) had this interesting anecdote from Lombard, which may explain why stage legends Lynn Fontanne and Alfred Lunt limited their cinematic output to one film:

The diet story was publicized on the cover, which featured a Marland Stone illustration of Luise Rainer, one of the few 1930s stars still with us as of this writing:

One of the others, Olivia de Havilland, is the subject of a story where she examines love:

In another article, Screenland announced it was the first movie magazine to meet Loretta Young's two adopted children (and we emphasize the word "meet" -- neither was photographed). We know a lot more behind this story than most of the public did at the time, of course, and for those of you casting the first stone at Loretta regarding the circumstances of Judy's birth, please remember the moral and social landscape of 1937 was nothing like it is today. That's all I'm going to say on the subject here.

And of course there were ads for films -- mighty MGM used spot color (orange, not red as in "The Bride Wore...") to hype four new releases, including arguably the weakest William Powell-Myrna Loy comedic collaboration:

20th Century-Fox promoted its latest kitchen sink musical, "You Can't Have Everything," including supporting player Louise Hovick, whom the world knew better as Gypsy Rose Lee...

...while another actress who excelled under a different identity, Dorothy McNulty (later Penny Singleton), was a supporting cast member in Walter Wanger's "Vogues Of 1938":

While none of the songs in "You Can't Have Everything" had much staying power, "Vogues" featured a future standard, "That Old Feeling."

David O. Selznick gave Ronald Colman one of his signature roles in "The Prisoner Of Zenda"...