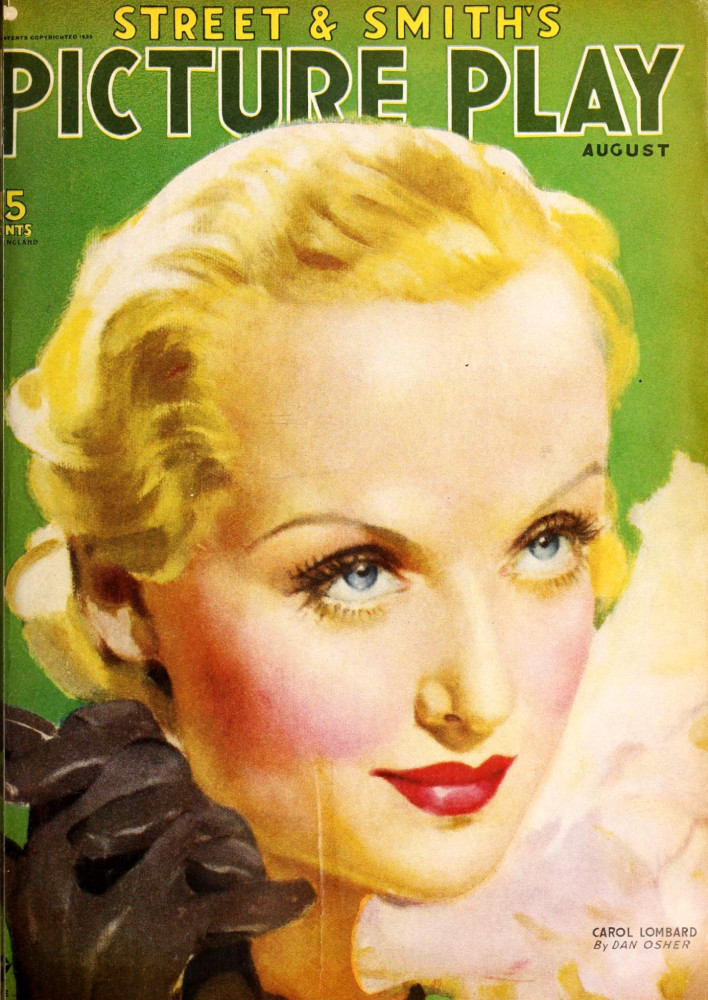 You won't find much of Carole Lombard in the August 1935 issue of Picture Play -- in itself hardly a surprise, since the magazine strangely held out adding an "e" to her name until early 1937 (http://carole-and-co.livejournal.com/594915.html). But here, there wasn't much of "Carol Lombard," either; other than a side reference to her fashion acumen in a column, she was entirely absent.

Then again, Lombard had spent much of the first half of 1935 traveling, taking it easy and hosting parties at her fabled Hollywood Boulevard home (culminating in the large event she threw at the Venice pier in mid-June). Any Carole product seen in theaters were later go-rounds of earlier films such as "Rumba," "Lady By Choice" or even possibly her big-screen breakthrough from the spring of 1934, "Twentieth Century."

However, that doesn't mean this August '35 issue is bereft of good stuff -- far from it. For example, take a look at this portrait of Jean Harlow: 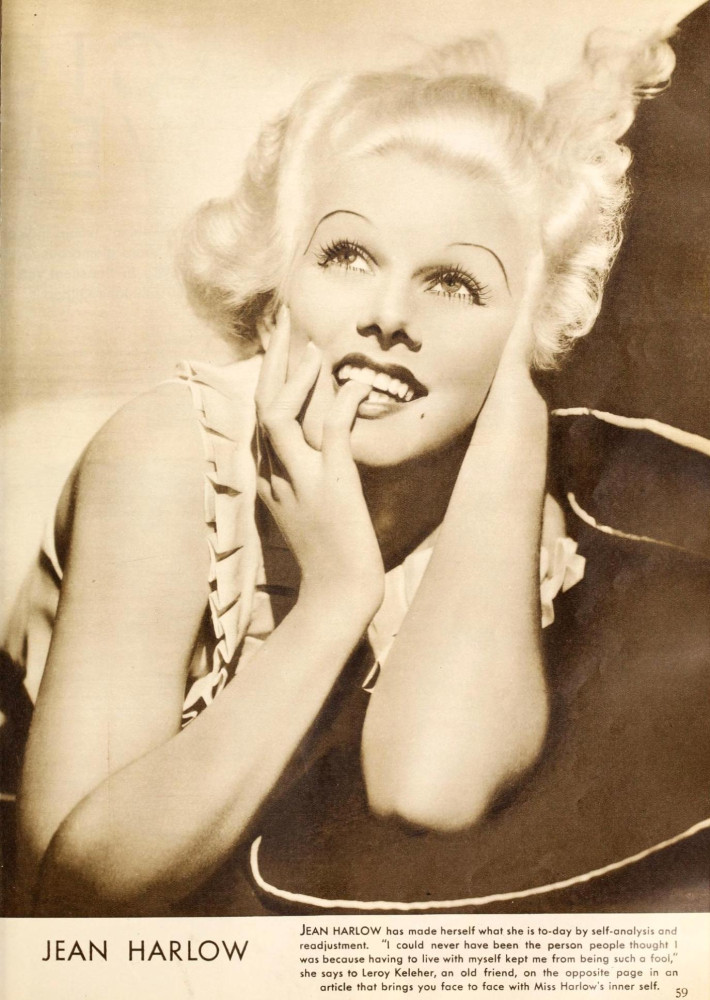 It accompanies a perceptive piece of Jean by someone who had known her since she was an extra, culminating in a poignant ending: 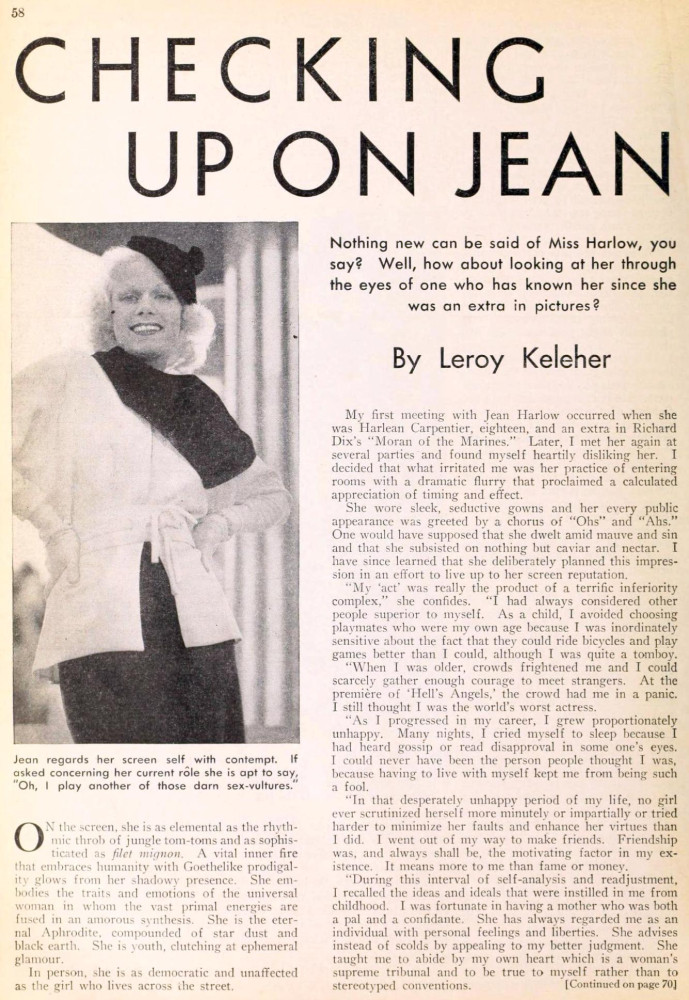 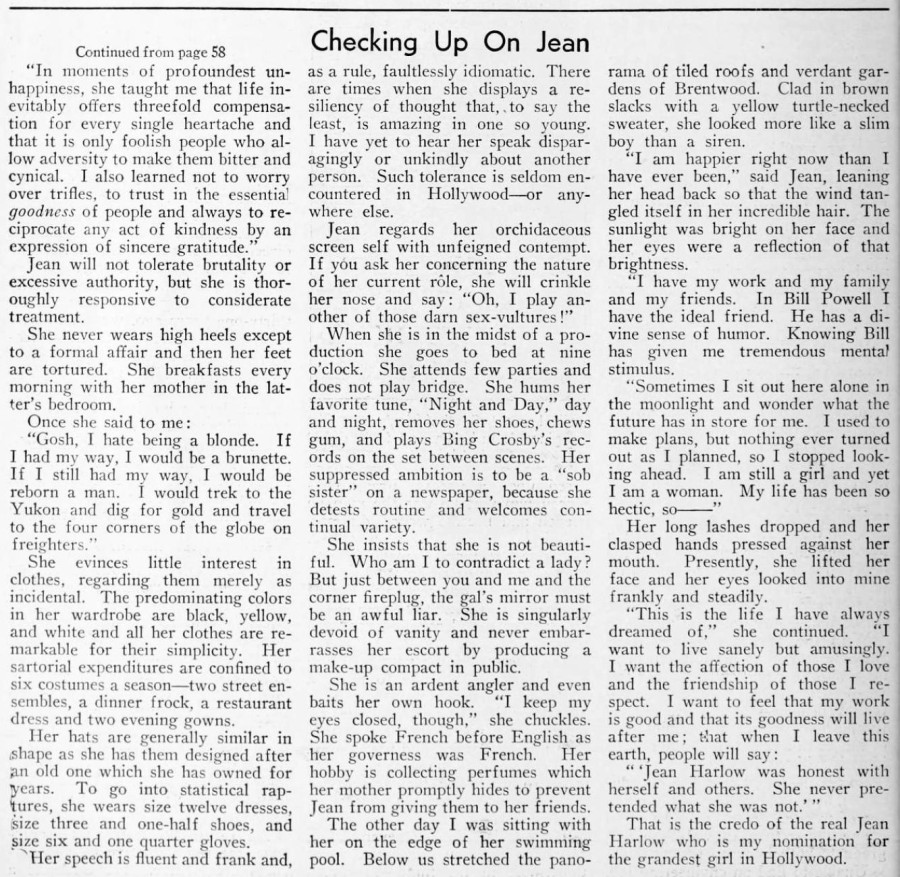 "I want to feel that my work is good and that its goodness will live after me; that when I leave this earth, people will say 'Jean Harlow was honest with herself and others. She never pretended what she was not.'"

When this issue hit newsstands in late June, no one knew that Harlow would "leave this earth" in less than two years.

Harlow is among the stars featured in an essay, "The Secret Of Color," written long before the concept of feng shui had crossed the Pacific: 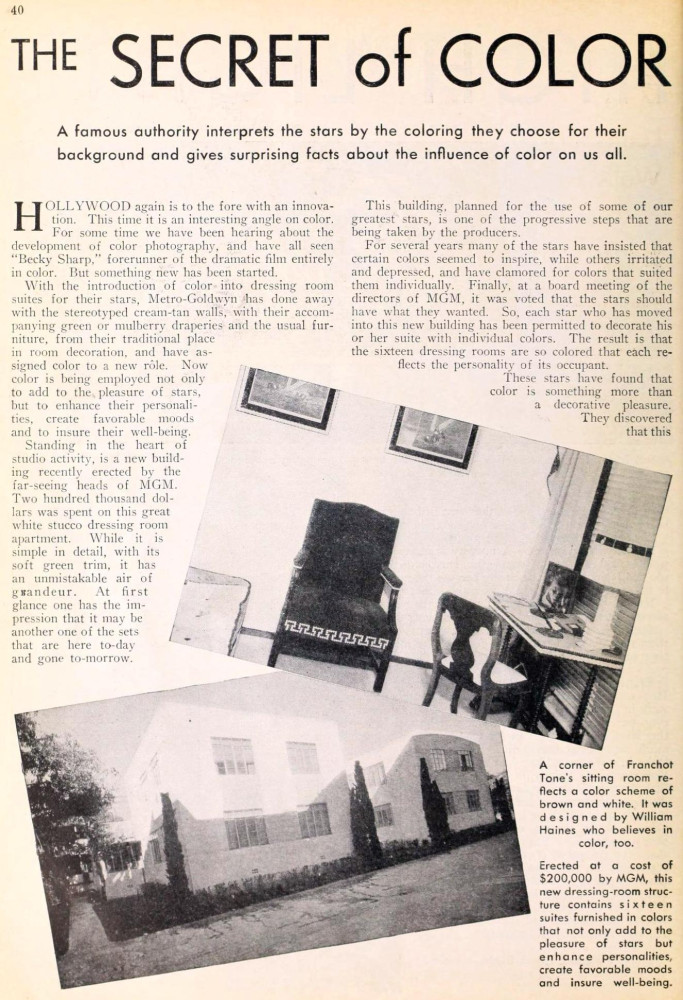 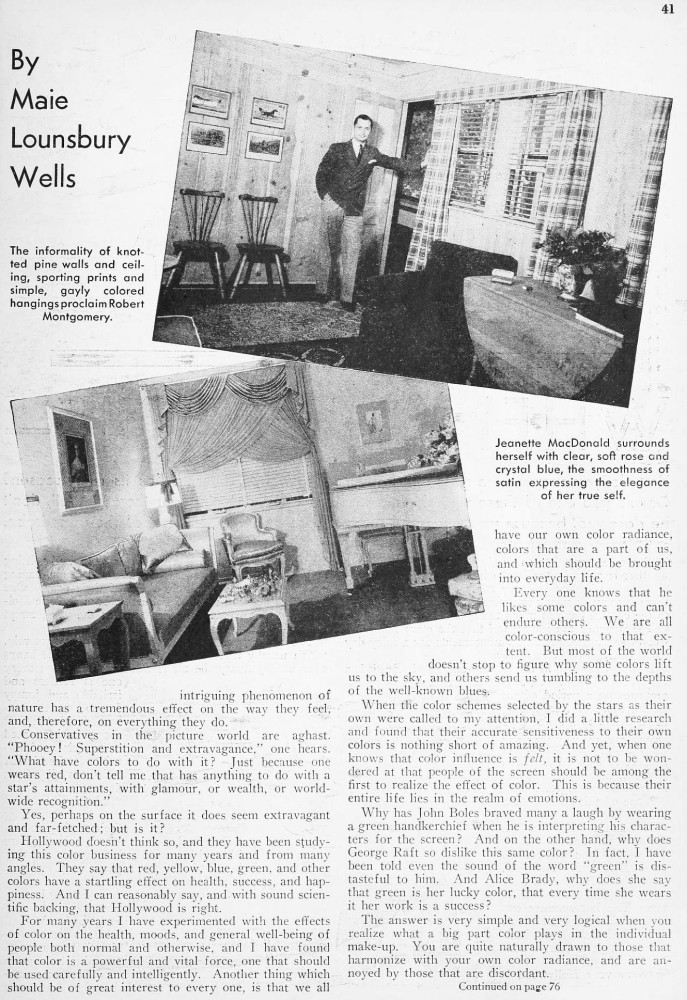 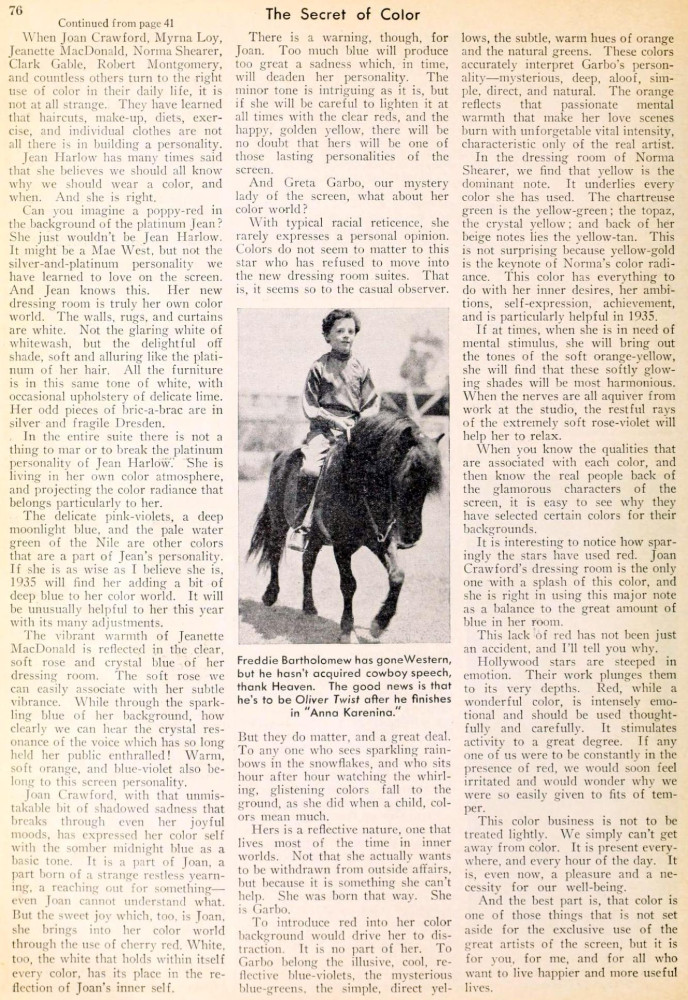 And as I get ready to experience my first Los Angeles winter (read "rainy season"), something we could use given California's epic drought, this story on how stars coped when the rains came. That caricature at the top of the first page conjures up "Singin' In The Rain" from "The Hollywood Revue Of 1929," doesn't it? 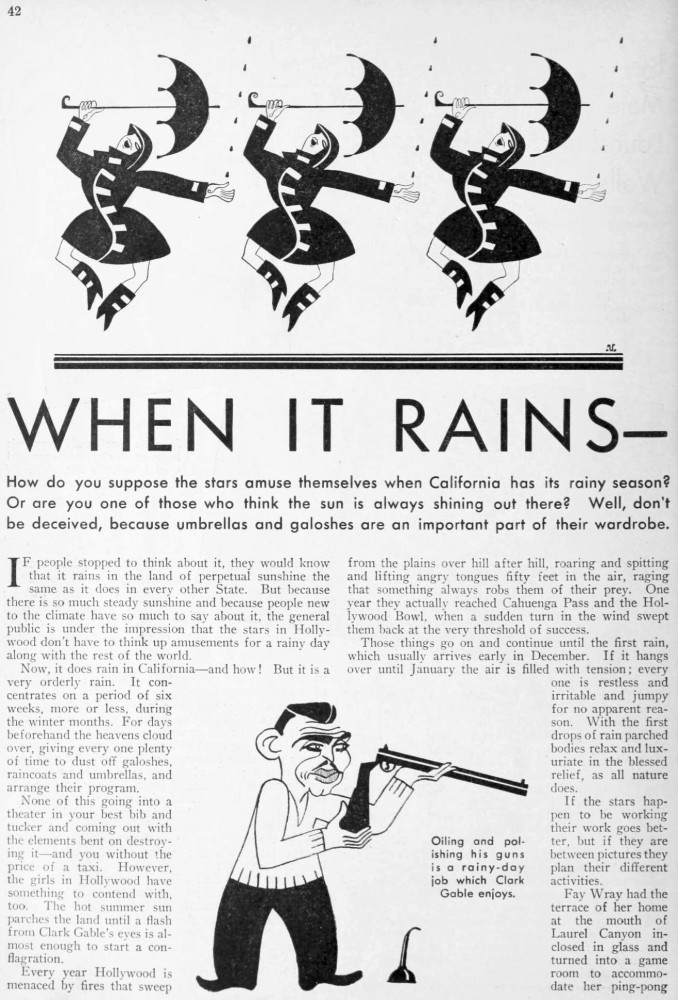 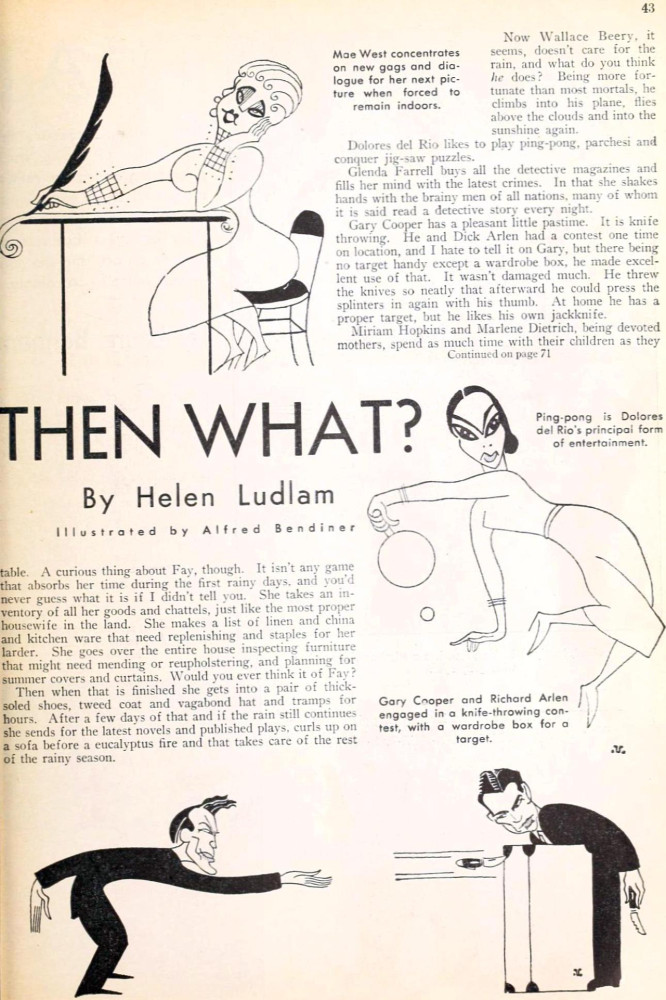 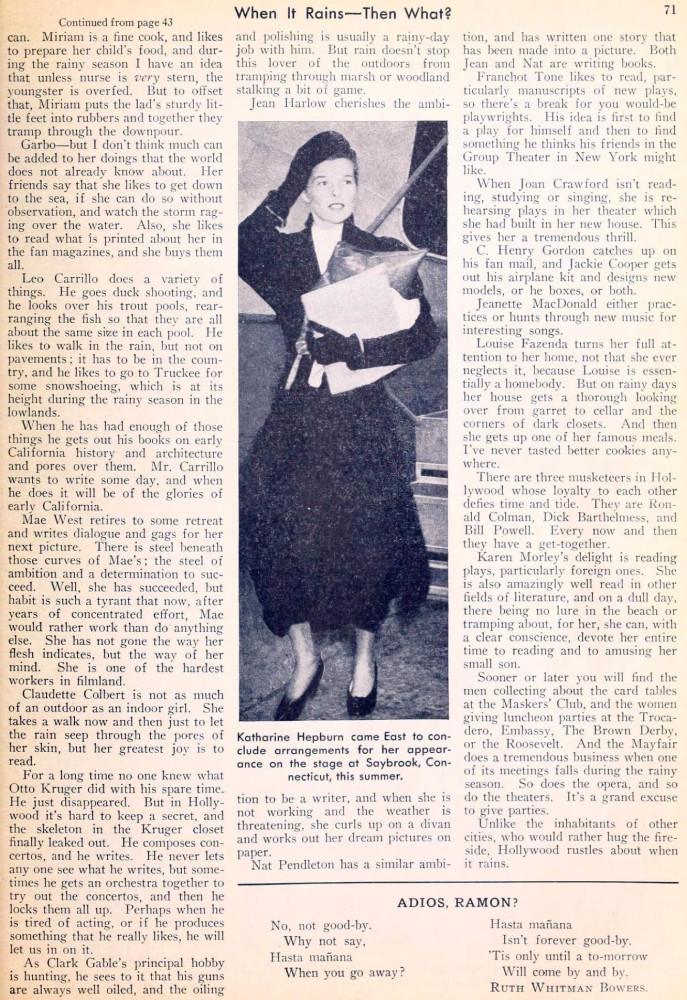 There only were two film ads in this issue. One was for MGM's "Escapade," a William Powell vehicle that introduced U.S. audiences to multiple Oscar winner Luise Rainer, who's still with us... ...the other a rather atypical ad from Paramount for its summertime prestige production, "Accent On Youth": The magazine is on sale for $39.99 at eBay; the seller says it's in very good condition: "The magazine has small cuts corner by spine/tiny corner/ cut/small pencil inside/some surface soil back cover." It will be available through 11:11 a.m. (Eastern) Sunday. To purchase this issue, which also includes pieces on up-and-coming Ann Sothern, Frank Capra, Claude Rains and others, go to http://www.ebay.com/itm/PICTURE-PLAY-1935-CAROLE-LOMBARD-JEAN-HARLOW-Story-BELA-LUGOSI-BORIS-KARLOFF-/361109670284?pt=Magazines&hash=item5413d0498c