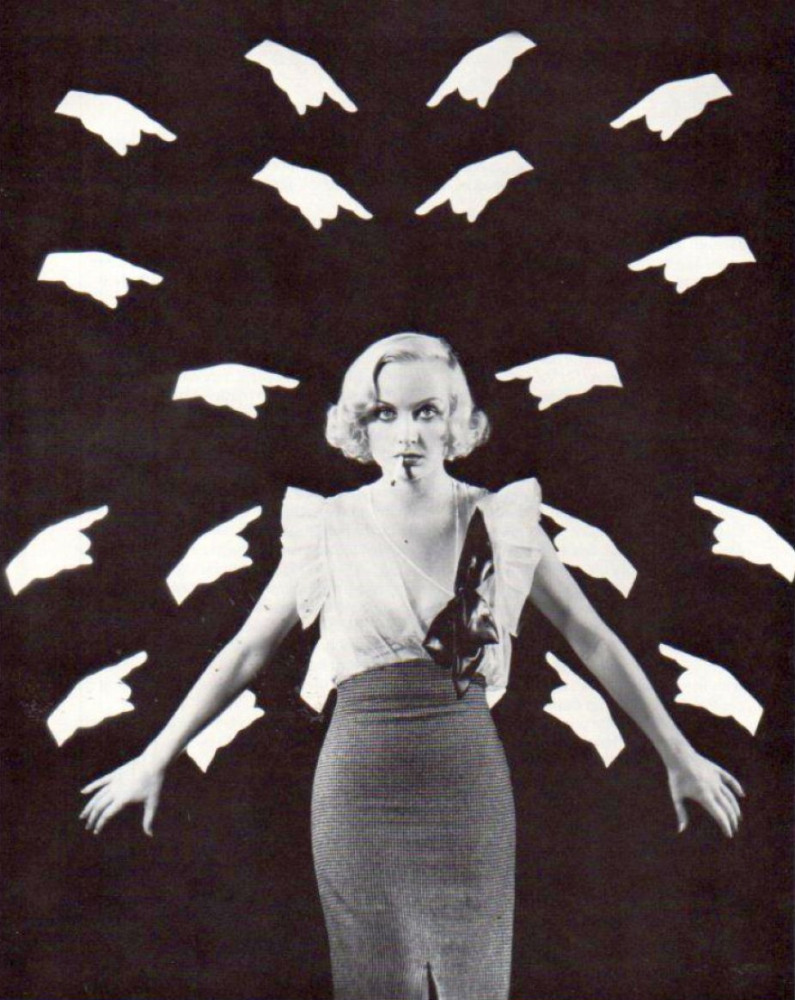 Carole Lombard was a relaxed sort, never at all projecting an impression that the world was out to get her. But that's the feeling you can get from this image, probably made during the early 1930s from the blonder-than-usual Carole hair. That shocked look on her face leads one to believe this pic is semi-comic -- and from all the pointed fingers, if Lombard were a basketball player (and she apparently played the sport in her youth), she's just been called for a foul and the opposing fans are letting her have it. (Then again, in the 1920s, crowds probably didn't have such chants in their repertoire.)

Of course, if Carole were a basketball player, she probably wouldn't be smoking a cigarette while competing. Which leads us to our next version of this pic...used as a part of a clipping from some book: 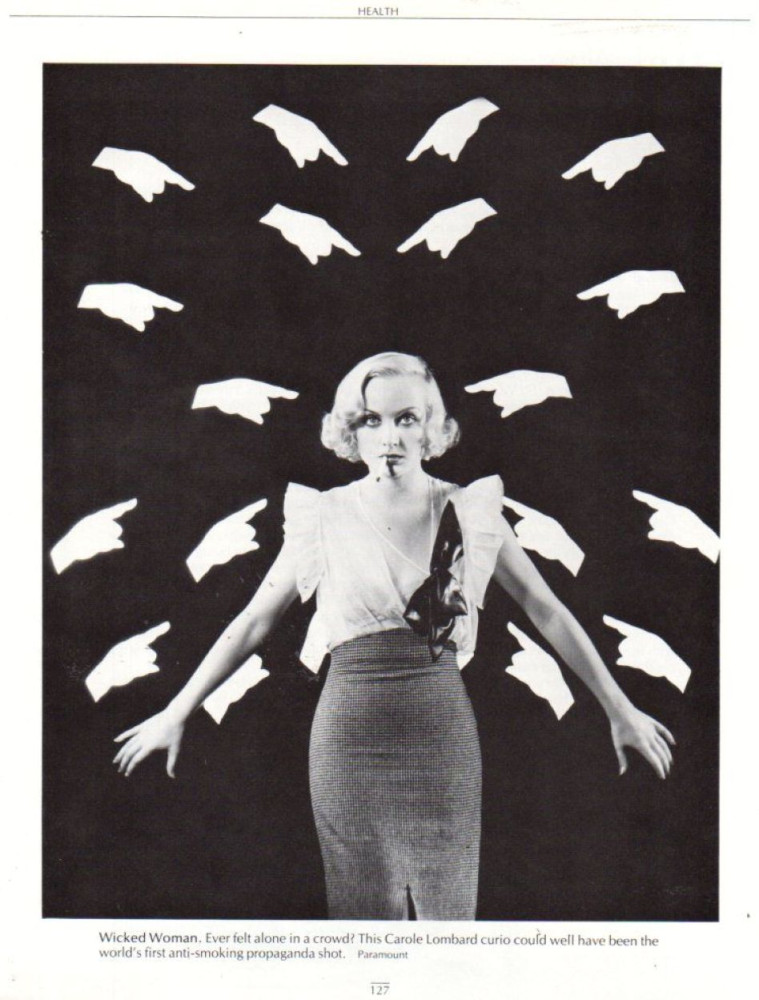 In the early '30s, there were no orchestrated anti-smoking campaigns; the practice was seen as chic and fashionable.

I also have some wonderful news -- I'm taking further advantage of my new residency in southern California, the self-proclaimed "entertainment capital of the world." 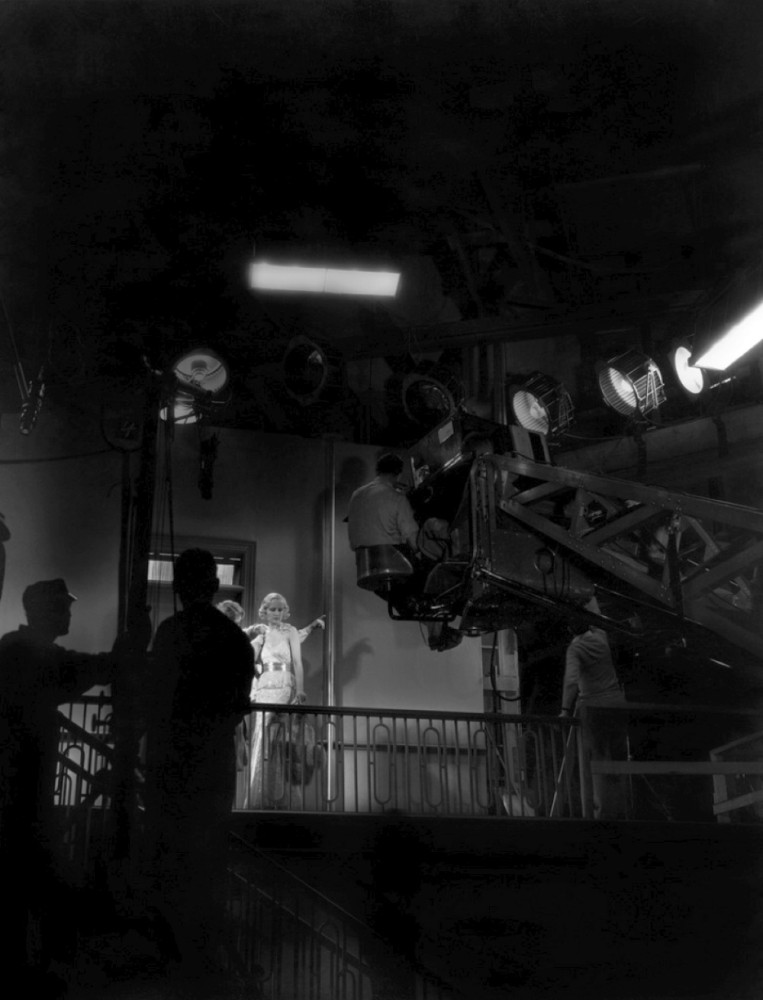 What if you could watch Carole cavort on a movie set, such as 1932's "Sinners In The Sun" (above)? Of course, even if you somehow managed to corral a time machine, studios were more or less off-limits to the public in 1932 (no tours were given back then, with rare exceptions). So I'm doing the next best thing: Watch two of TV's top sitcoms film episodes before a live audience, at studios -- maybe even the same stages -- where Lombard worked back in the day. I did likewise in March 2000, when I visited Paramount for a "Frasier" filming with guest star Robert Loggia:

First, a week from tonight, I'll be at Warners in Burbank to watch an episode of "Mom":

I've hardly hidden my affection for this series (above is a scene from last night's second episode of the second season), as it treads on potentially uncomfortable issues -- alcoholism, financial woes, a dysfunctional family -- with both humor and heart. It can get dark at times, but that validates its quality...not to mention a stellar cast headed by Anna Faris and Allison Janney.

Because CBS delayed the opening of the second season of "Mom" for a month, I'm guessing several more episodes than usual already are in the can, and the episode I'll be watching may not air until January, when the Chuck Lorre series returns to its Monday time slot. As a fan of the series, I promise not to give away any spoilers when I later report on my experience.

Then, three weeks later, it's off to the CBS Studio Center in North Hollywood (which began life as a Mack Sennett studio in the late '20s) to see "Hot In Cleveland": 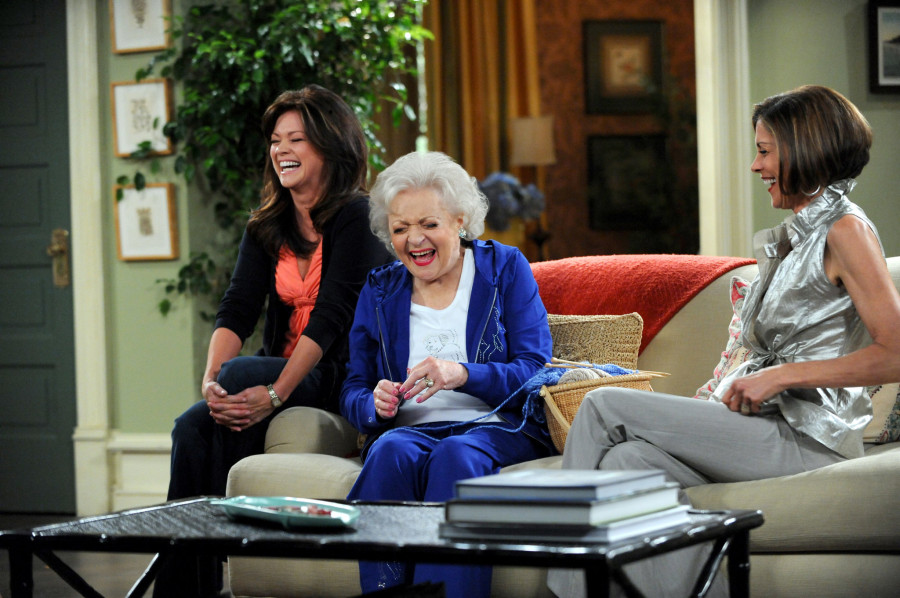 For those of you who want to attend a TV episode filming, some ground rules: These more often than take several hours to complete, so you may not leave the studio until it's quite late. (If you can't drive, make sure you have sufficient cab fare for the return to your home or lodging.) Tickets are free, but there are some restrictions (e.g., no cameras -- remember, people are here to work). It's an experience every TV fan should try. To obtain tickets or for further information, please visit http://www.tvtickets.com/.
Collapse