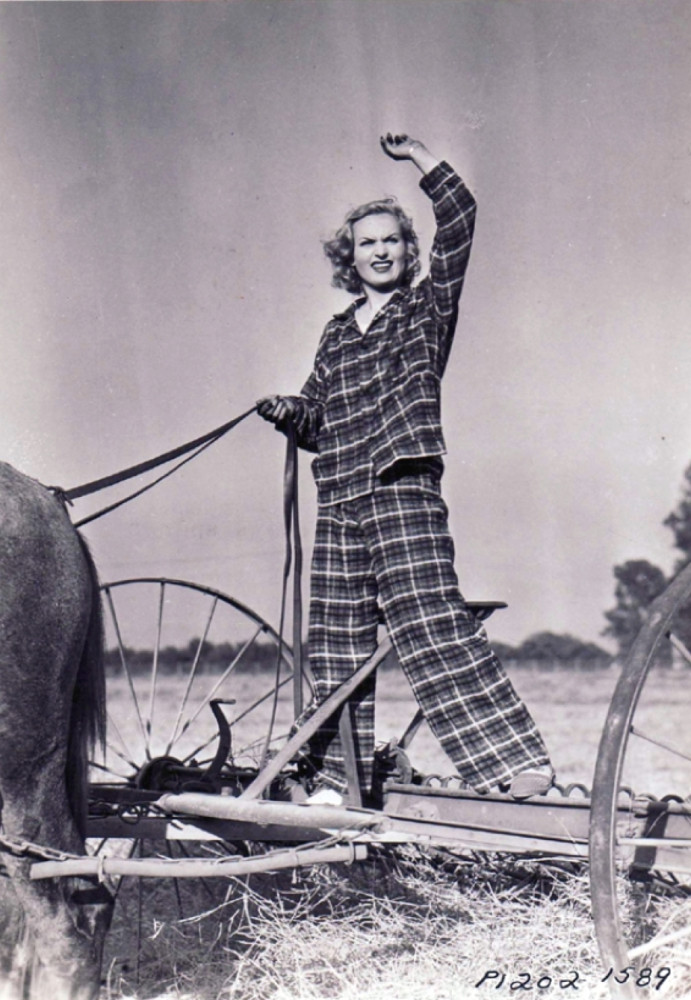 Even before hitching to Clark Gable as her second husband, Carole Lombard showed the public her sudden fondness for rural life through a series of Paramount publicity photographs taken at the San Fernando Valley ranch she owned in 1937. (It's probably some subdivision now.) Above is p1202-1589, which we've shown before; now another photo from that farmland session has surfaced. This one is p1202-1582, shows Carole with a cow, trying to prove that posing with a bovine indeed can be glamorous. We'll leave that answer up to you... 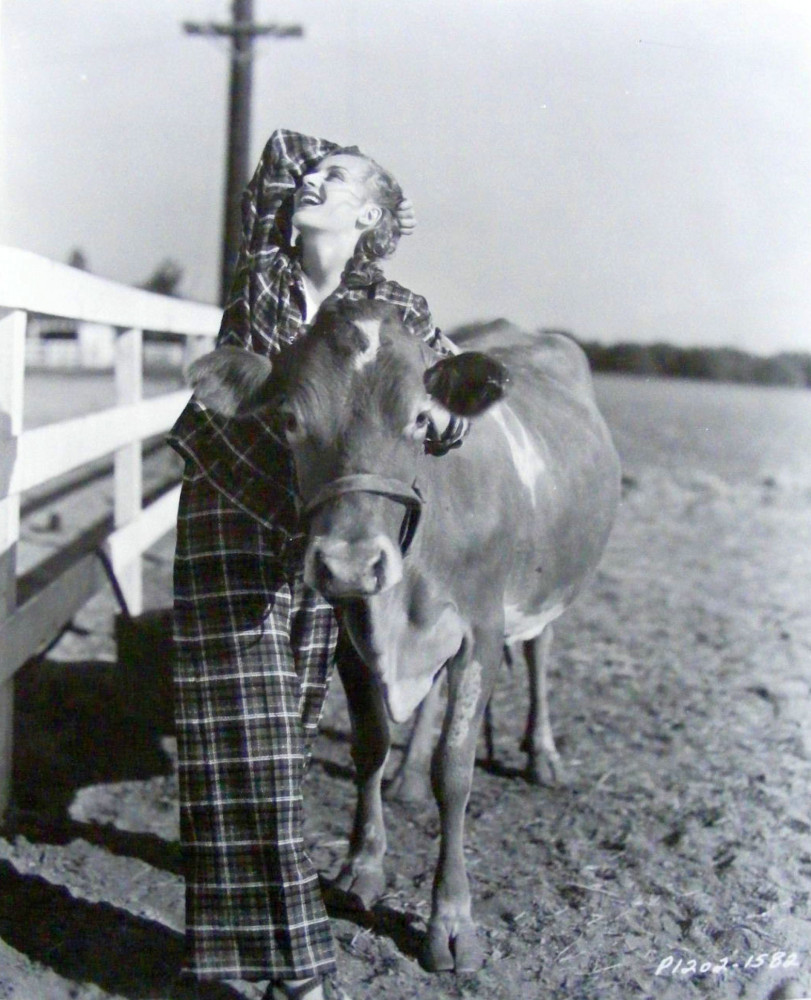 ...but note the snipe on the back, where Paramount seeks to prove the argument while simultaneously promoting her upcoming film, "True Confession": 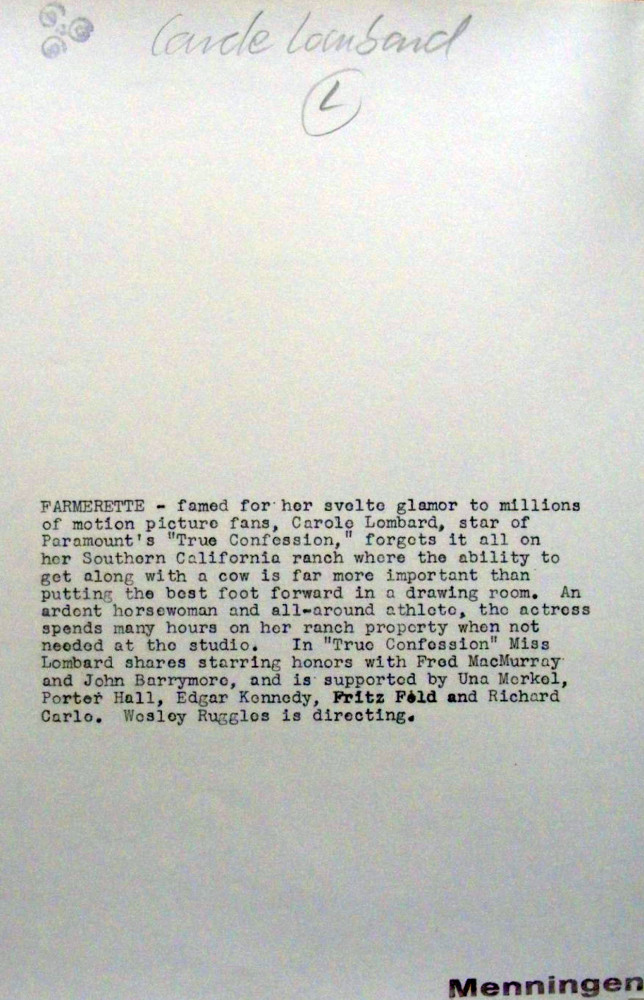 This hitherto unseen pic (at least unseen by me, who's been tracking down Lombard portraits for a decade or more) is up for auction at eBay. It's an original, 7.25" x 9.5", and in very good condition. (I presume "Menningen" owned this image at one time or another.)

Bidding begins at $9.99, with the auction scheduled to end at 8:08 p.m. (Eastern) Wednesday. If, unlike Bart Simpson, you want to have a cow (does he still say that anymore?) or are simply curious about this photo, then go to http://www.ebay.com/itm/Carole-Lombard-posing-with-a-cow-original-candid-portrait-photo-1937-Paramount-/381037299927?pt=LH_DefaultDomain_2&hash=item58b797c8d7.

Even though the major league baseball season ended last night -- and while I wasn't rooting for either San Francisco or Kansas City, that postseason pitching performance from Giants' lefthander Madison Bumgarner bordered on the amazing -- I'm nevertheless in a good mood. That's because my favorite sitcom, "Mom," finally is returning for its second season tonight, at 8:30 Eastern and Pacific, 7:30 Central. (It had been set to open on Monday late in September, but at the last minute CBS decided to shift it to Thursdays following the end of its Thursday NFL telecasts. "Mom" likely will return to Mondays in January.) 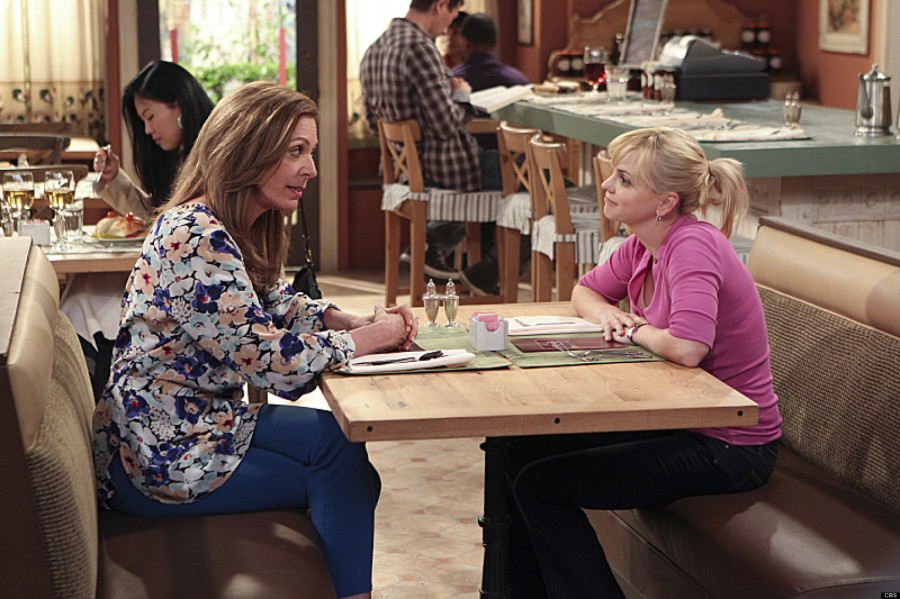 With Anna Faris (a delightful comedic actress in the Lombard tradition) and multi-Emmy winner Allison Janney heading the cast, "Mom" is a well-written series, and one of the best multi-camera sitcoms on TV, about mother-and-daughter recovering alcoholics who struggle to make ends meet...while the next generation includes a single teen daughter who just gave birth. That dysfunction doesn't sound like a formula for laughs, but there's plenty of humor, as well as poignant moments, yet it never hits you over the head as if it were a '70s afterschool special. Mark my word, you'll enjoy it.