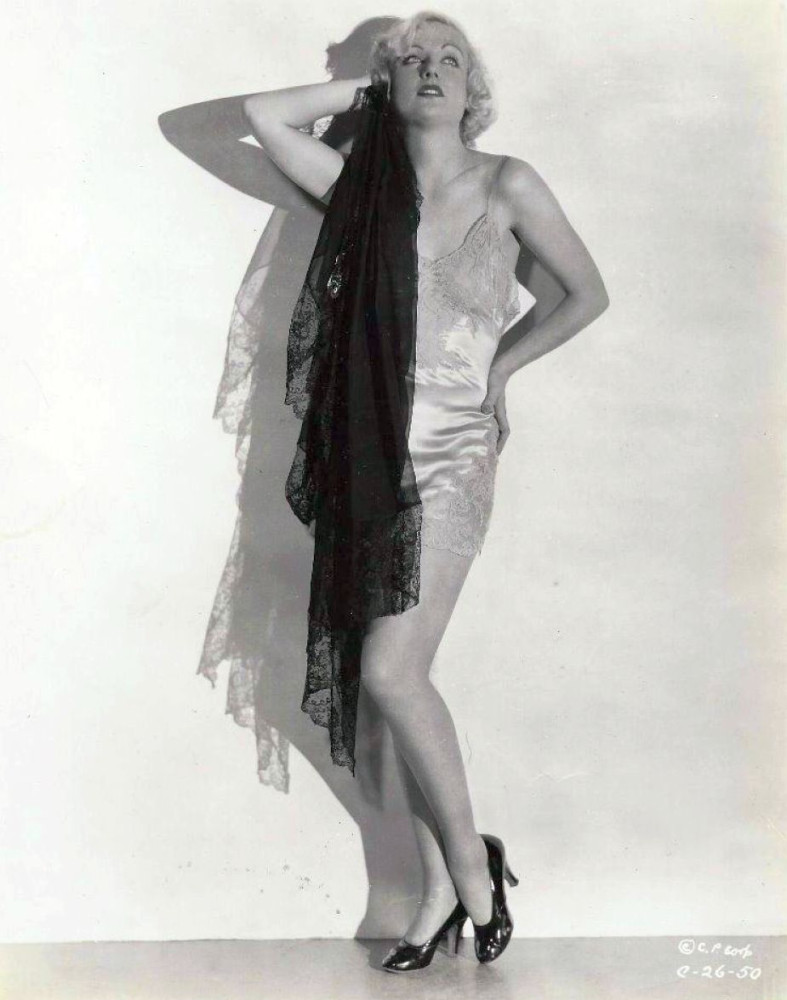 Carole Lombard's first film for Columbia, 1932's "Virtue," was more suggestive than racy, at least on screen; while her character Mae is a streetwalker, convicted at the start of the movie for soliciting and ordered to leave New York City (the part of the film the audience doesn't actually see), we don't actually view Mae at work on the streets. However, through the publicity still above (probably taken on behalf of "Virtue"), one can get a good idea of the wares she was selling...and I'm certain many newspaper and magazine readers, particularly those who were male, wished they were buying.

This sensual photo of Lombard at her blondest and boldest -- pre-Code at its most breathtaking -- is up for auction at eBay. It's an 8" x 10" original, and the seller says it "has a little handling wear" (like Mae herself?) "and a slight trim on top edge."

The opening bid is a mere $7.50, but such services, er, pictures tend to increase in value. Unless the vice squad comes in to close shop (and it shouldn't -- selling such photos is perfectly legal), the auction ends at 7:48 p.m. (Eastern) Saturday. Learn more about what Lombard's selling at http://www.ebay.com/itm/EARLY-1930S-CAROLE-LOMBARD-ORIGINAL-PRE-CODE-PHOTO-/201164769944?pt=LH_DefaultDomain_0&hash=item2ed65aca98.

Since love for sale is the topic, so to speak, how about hearing the Cole Porter song of that name? (Because of the subject matter, it wasn't allowed to be performed on the radio for many years.) Here's Fred Waring's Pennsylvanians from 1930, with the Three Waring Girls singing those salacious lyrics, and a record that was a big hit in its day. (Note some of the images associated with this are NSFW.)