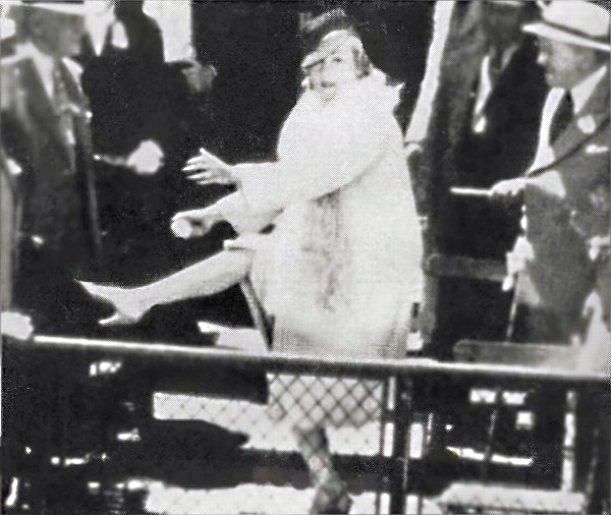 (We make one of our occasional visits to Hollywood heaven, where last night Carole Lombard was sitting in front of her big-screen TV -- and up there, "big" means nine feet high and 20 feet wide -- when Clark Gable enters the room and sits next to her.)

Clark: Whatcha got on?
Carole: The Dodger game. Between-innings break.
Clark (surprised): Say, isn't that an ad for...
Carole: Yep, Forest Lawn -- as if our mortal selves needed more neighbors. But at least it's done tastefully. It is rather amusing to think they sponsor ballgames.
Clark: The ultimate growth industry. (The game returns to the screen.) Hmmm, 4-4 vs. the Braves, bottom of the seventh.
Carole: But you haven't heard the big news!
Clark: Well, I see that Yasiel Puig is trying for the cycle. That's pretty big.
Carole (nodding): He's singled, doubled, tripled; now he needs a home run...but no, that's not the news I was talking about. (Puig doesn't hit a home run, but beats out an infield grounder to third for a single.)
Clark: So, what is it?
(Carole reaches for the magic remote, presses a button and "BREAKING NEWS" pops up.)
Clark: So, did they finally resolve that dispute over coverage of their new cable channel? Of course, up here we get everything.
Carole: Just watch, Pa.

Carole: As she said, it's not just breaking news, it's fantastic news! Vin Scully is going to do Dodger games for his 66th season.
Clark: Longer than either you or I walked the earth. (Pauses.) I recall when they moved out to LA and played at the Coliseum, people carried their transistor radios to the games and Vin won them over.
Carole: He's still damn good. Hey, let's get back to the ballgame.

They indeed held on -- added an insurance run in the eighth, in fact -- and won 8-4. Your humble administrator here, and yes, I am thrilled Scully is coming back for 2015. When my parents and older sister lived in Brooklyn in the early '50s, they heard his work as he was just starting out in the industry. Now, I'll have a chance to do likewise...and he remains a joy to listen to. Vin unites generations, and I think it safe to say that no announcer is more beloved by his audience.

More can be found at http://mlb.mlb.com/news/article/mlb/broadcaster-vin-scully-to-return-to-dodgers-booth-for-66th-season?ymd=20140729&content_id=86971774&vkey=news_mlb. Oh, and that microphone given away last night (sponsored by Farmer John, whose Dodger Dogs and other meat products Vin has endorsed for decades) features six of Scully's signature calls, including his trademark "It's time for Dodger baseball." Didn't get one? I'm sure many will be available at eBay.
Collapse