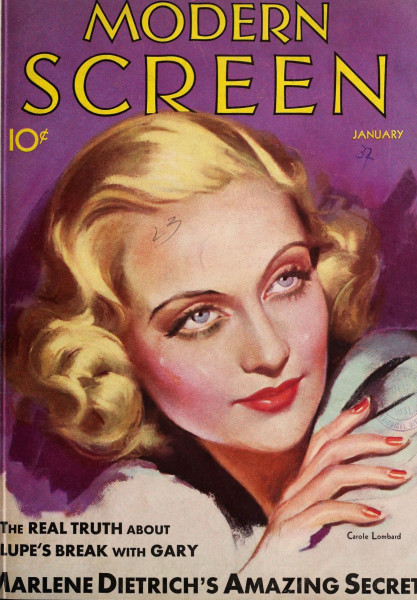 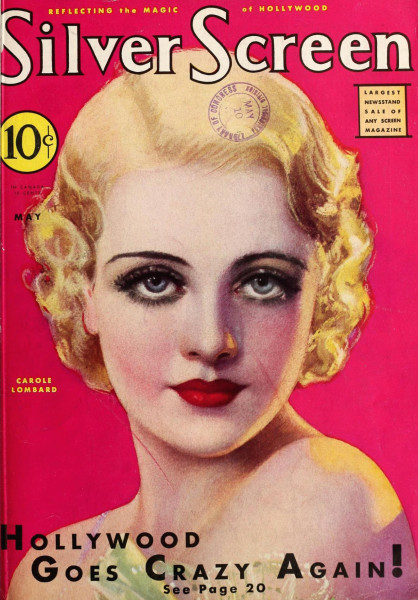 To those of you who like to immerse yourself in the 1930s Hollywood inhabited by Carole Lombard and other legends (or at least the Hollywood the studios wanted readers to believe existed), a double dose of good news. The Media History Digital Library has added extensive runs of both Modern Screen and Silver Screen magazines, only a few months after doing likewise with Screenland. (Lombard is shown above on the January 1932 Modern Screen and the May 1932 Silver Screen, her first cover appearance for each magazine.)

The online library features Modern Screen and goes from November 1930 all the way to 1960 (though a few early issues are missing), while Silver Screen also begins in November 1930 and lasts through October 1940. Their addition now means the library has sustained or close to complete runs of eight screen fanmags (also including Hollywood, Motion Picture, The New Movie Magazine, Photoplay and Picture Play) in addition to a 1931-1937 run of Movie Classic and much 1920-1930 output from its predecessor, Motion Picture Classic. You can find them at http://mediahistoryproject.org/collections/.

In ensuing months, I'll extensively mine this motherlode of fanmagdom, seeking to separate the fool's gold (aka studio puffery) from the real thing. (At times they co-exist.) For now, however, let's look at Lombard's first extnnsive appearance in each magazine. We'll begin with the February 1931 Silver Screen, and a handsome pic of her taken late in 1930: 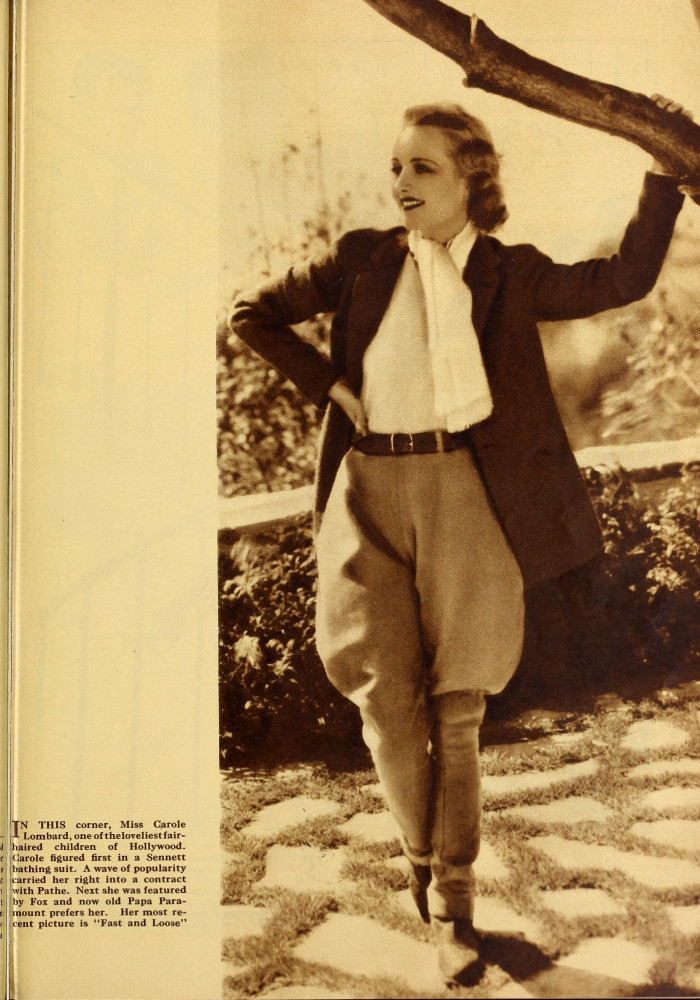 Carole was mentioned several times (without an illustration) in an article elsewhere in that issue on a familiar conceit -- stars' figures, something Photoplay also did about that time (http://carole-and-co.livejournal.com/595236.html). This story also compared stars to Venus, the mythical ideal of physical beauty: 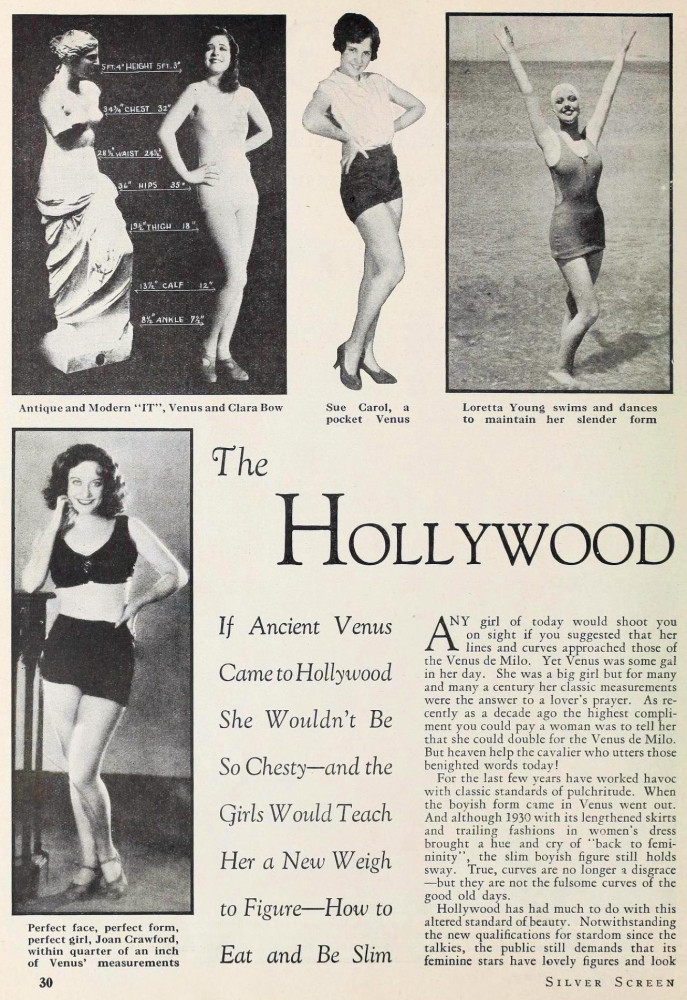 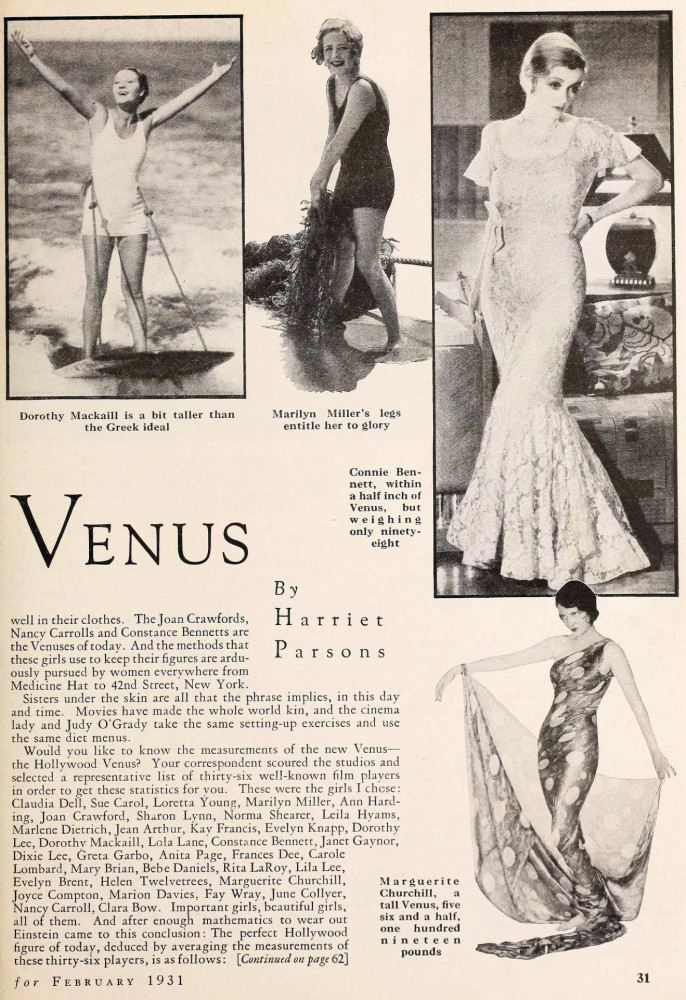 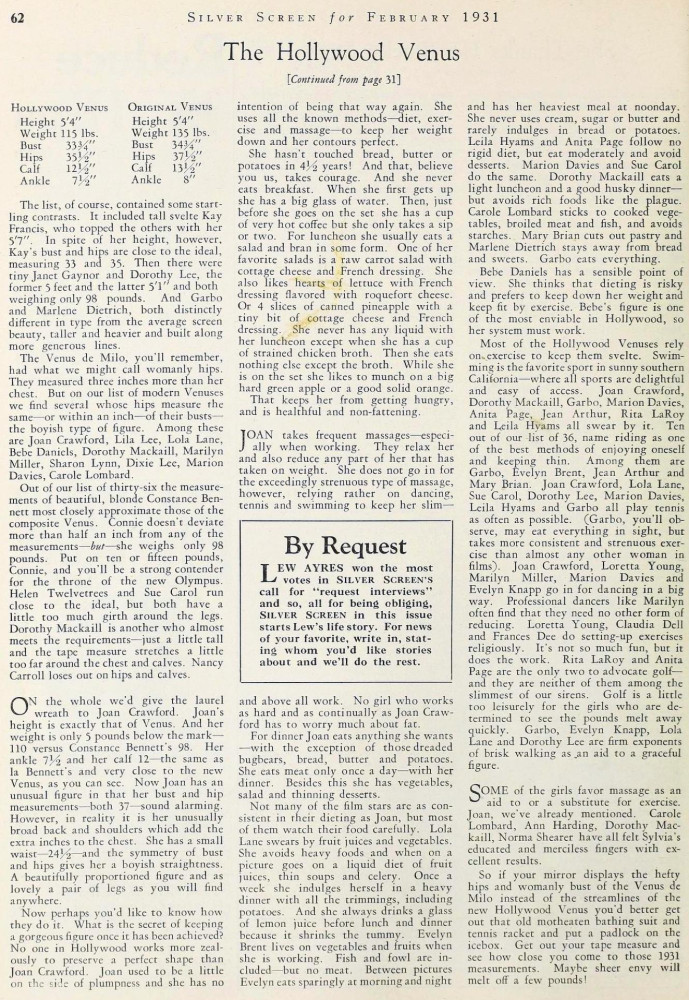 None of the stars' measurements are fully provided, so alas we don't have yet another candidate in the long-running debate regarding Lombard's height. (As for the star whose figure most resembled Venus, Joan Crawford was the winner by default, although if Constance Bennett -- whom some wags tagged "the human clothes-hanger" -- had added a dozen or so pounds to her 98-pound frame, she might have claimed the honor.) 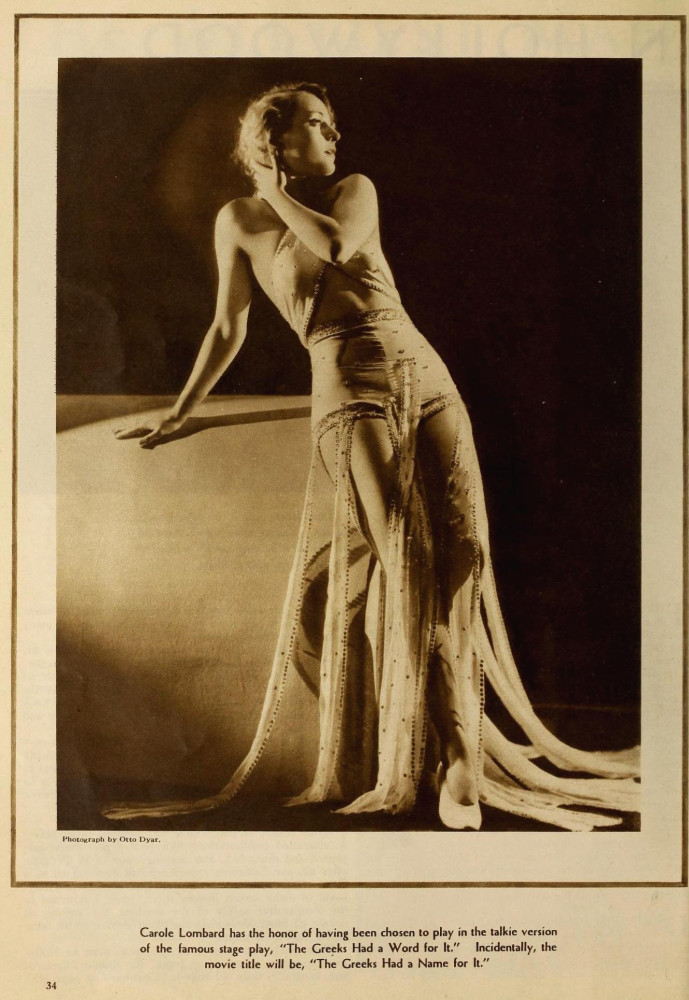 Also in the August 1931 issue was a story on the preview to her film "Up Pops The Devil," and look who's on hand to provide support...husband-to-be William Powell. (This photo was taken prior to their marriage in late June.) 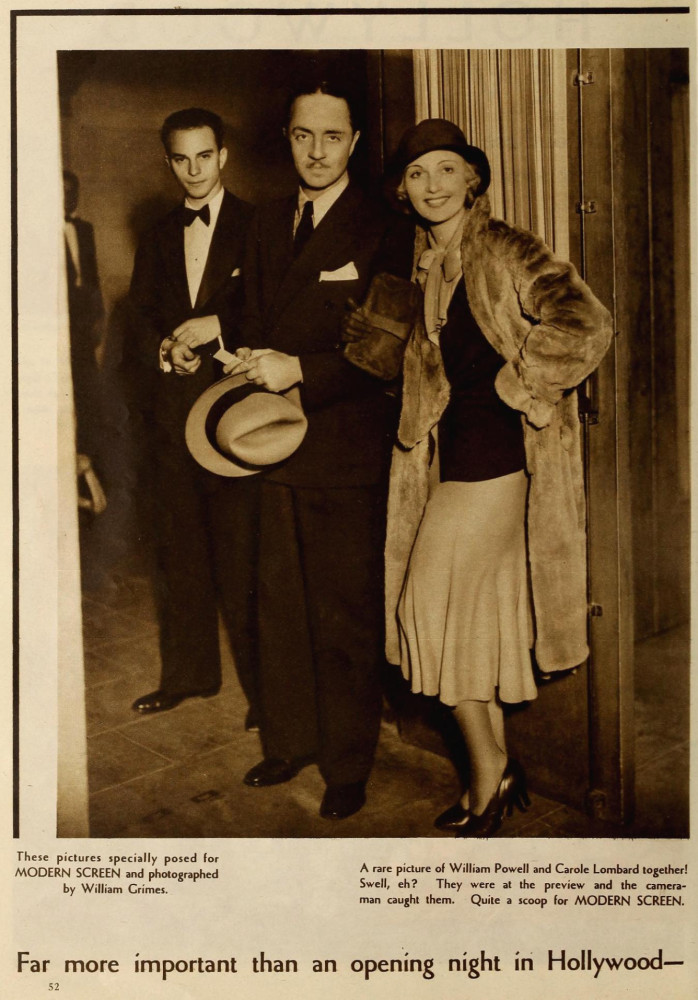 The preview was held at the Alexander Theater in Glendale; its name was later shortened to Alex, and it's used today for performing arts events, including the Loretta Young tribute held this past January (http://carole-and-co.livejournal.com/667409.html). Here's what a Hollywood preview looks like, as well as a response mailed to Paramount from someone who saw the film (and has nice things to say about Carole): 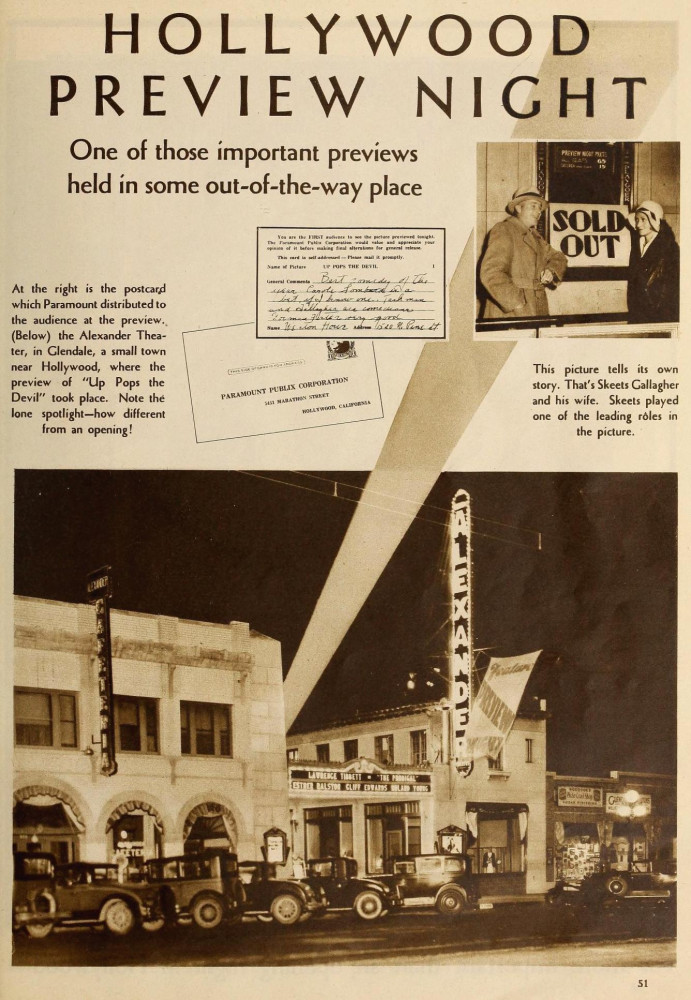 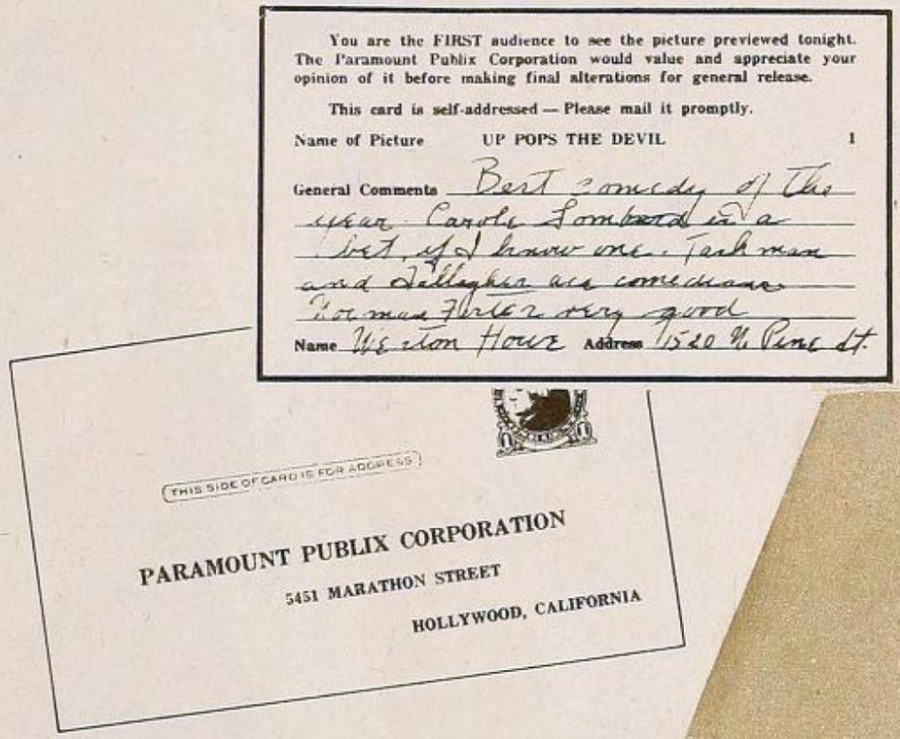 Some other notables, both actors and executives, came out to Glendale...even a few who had nothing to do with the film: 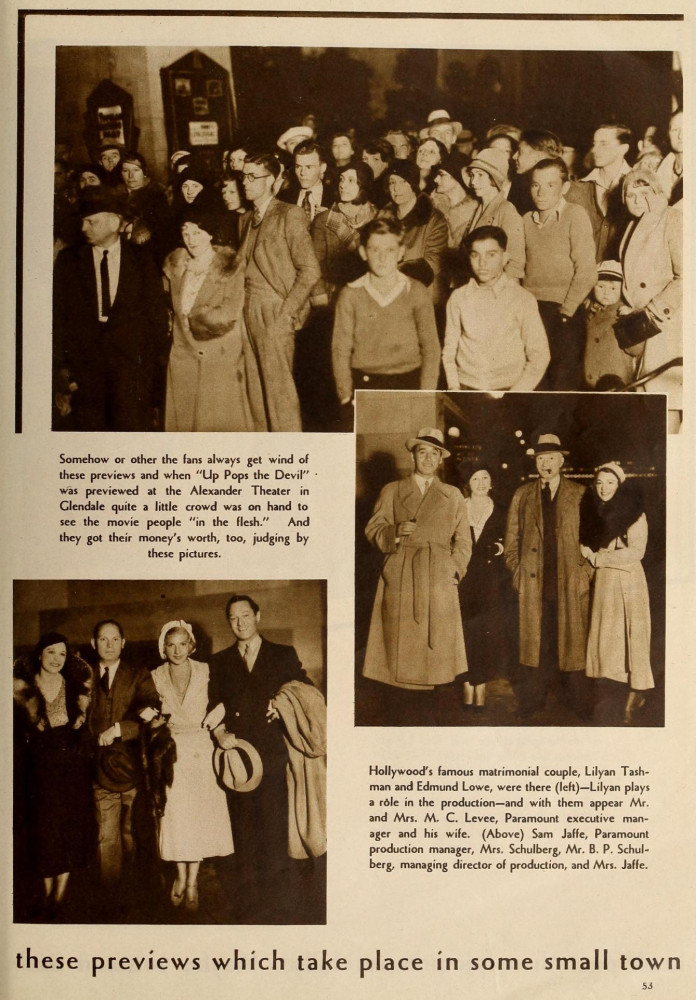 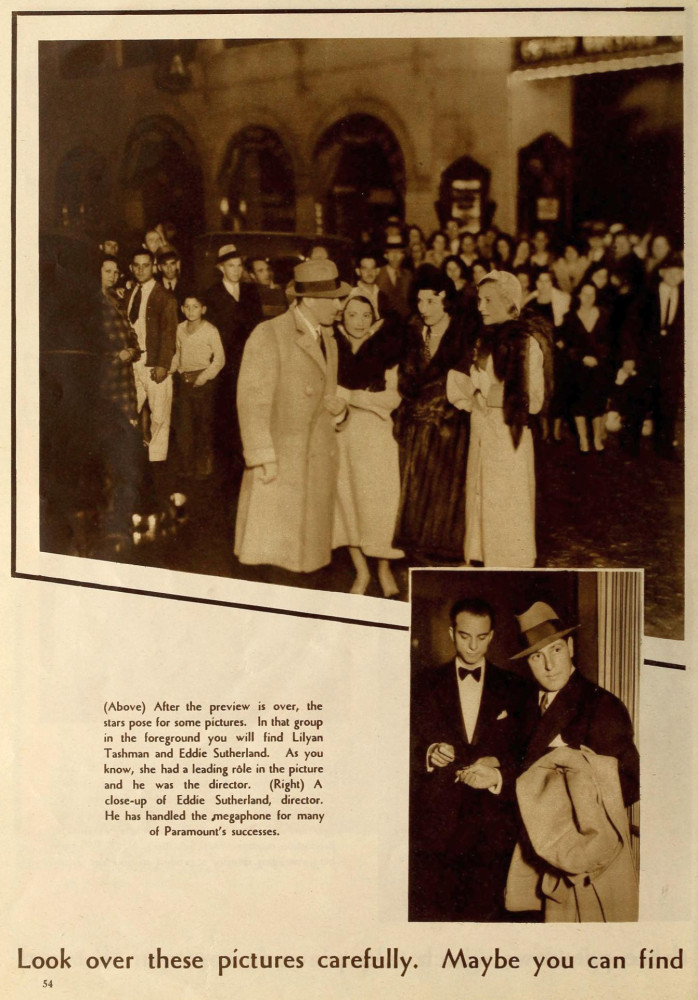 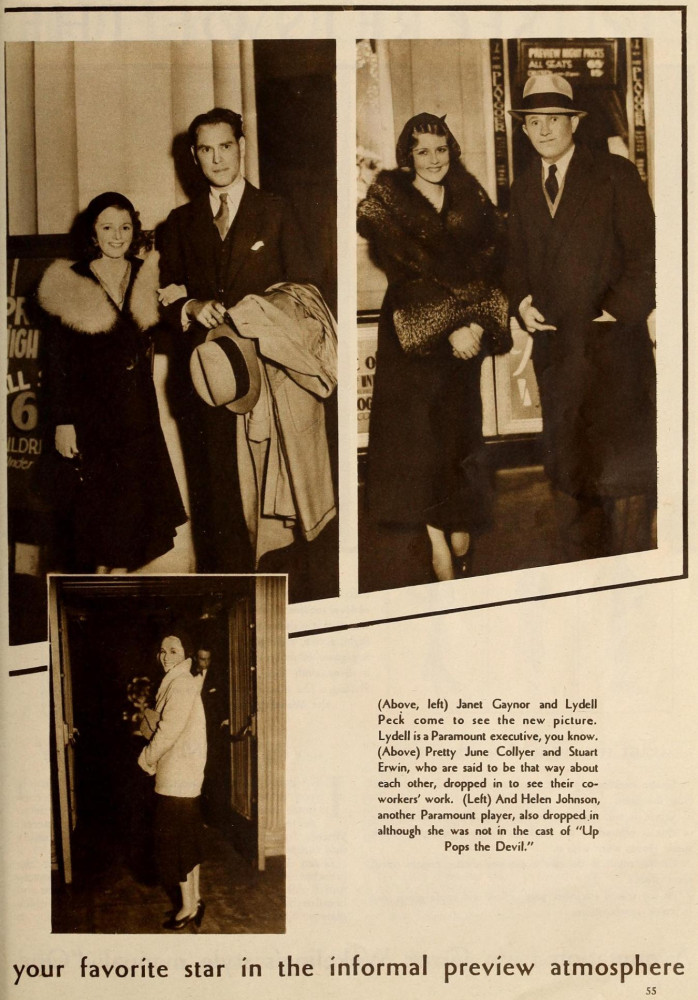 I'm definitely looking forward to using these fanmags as a resource.
Collapse