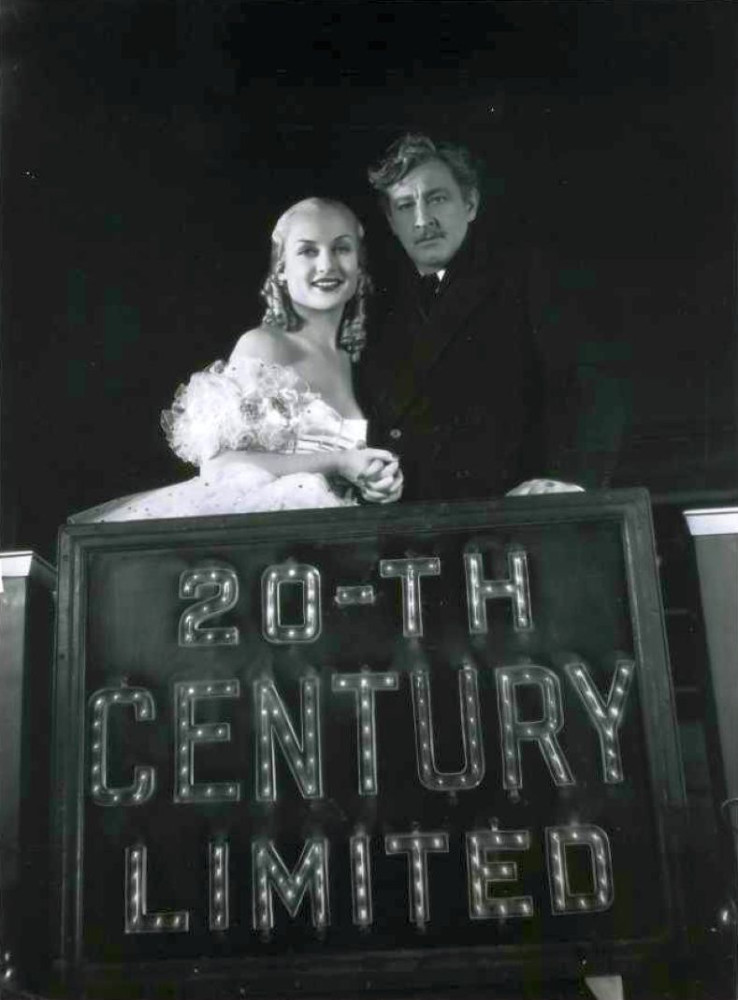 May 1934 would be one of the most pivotal months in the life of Carole Lombard...and all it took was a ride with John Barrymore aboard the "Twentieth Century." Columbia opened the film in wide release that month, and while it wasn't anywhere as big a hit as the studio had hoped (particularly following its unexpected smash with "It Happened That Night"), it did sufficient business -- especially in metropolitan areas such as New York, which was familiar with the Broadway play it derived from. That familiarity can be seen in capsule reviews of the film from Manhattan papers in the May 9 Hollywood Reporter: 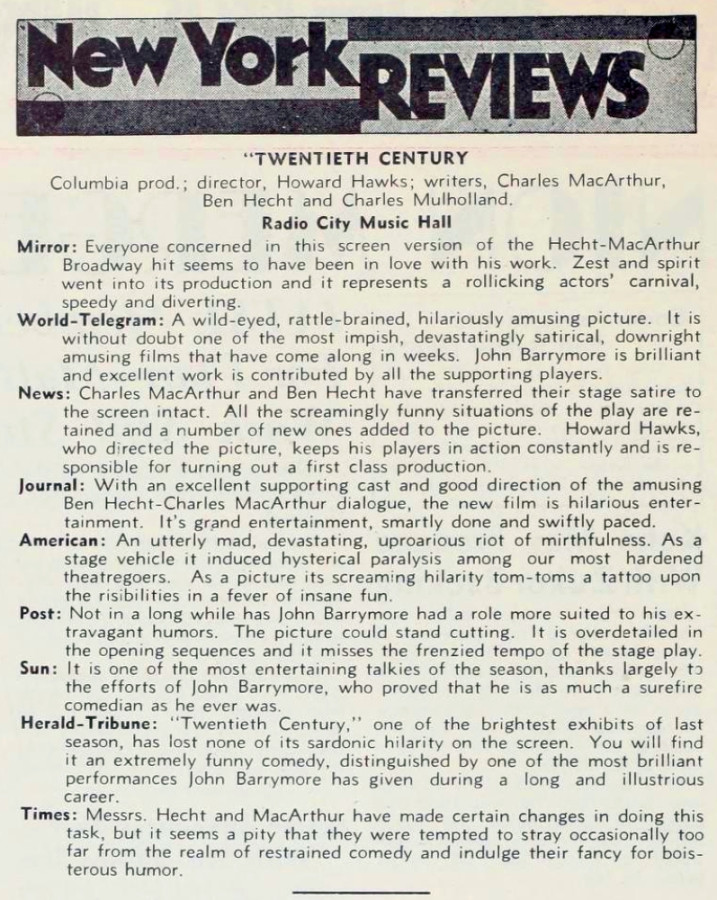 What also began to change was public perception of Carole, from a clotheshorse with indifferent acting skills into a dynamo in front of the camera. And while that perceived change wouldn't reach full fruition for another year and a half, reviews made it evident. Let's cross the East River into Brooklyn and see how that borough's paper, the Eagle (where my grandfather was a reporter) reviewed "Twentieth Century":

Barrymore's tour de force understandably drew the lion's share of the attention (oh, and speaking of "Drew" and of "Barrymore," I'm happy to report that "Twentieth Century" will be part of this season's roster on Turner Classic Movies' "The Essentials"), but reviewers noted Carole matched him stride for stride, such as this one from the May 5 Syracuse Herald: 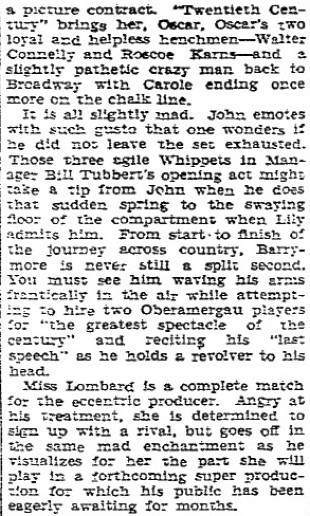 In its review, the May 28 Bakersfield Californian first said of her, "Miss Lombard is bewitchingly pretty," but then addressed her real magic -- "and this is the first time she has really registered as an actress": 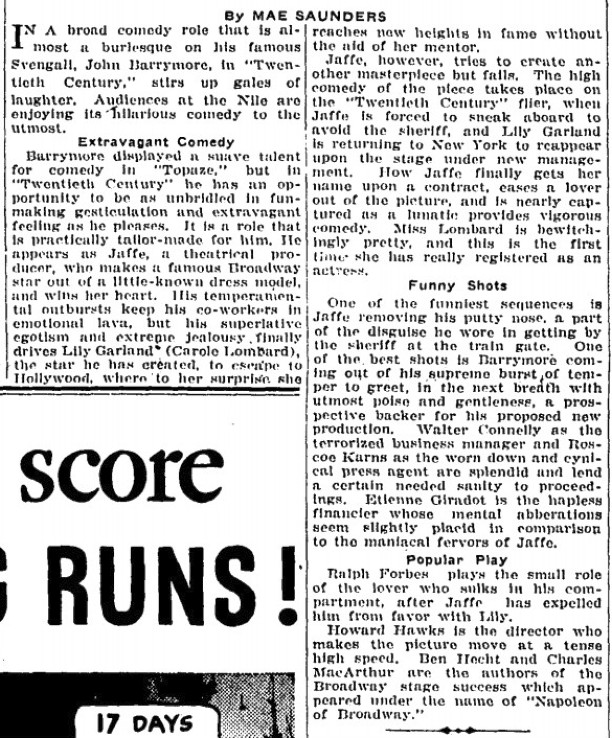 And a syndicated column, "Screen Life In Hollywood," which ran in the May 4 Scranton Republican, had similarly nice comments: 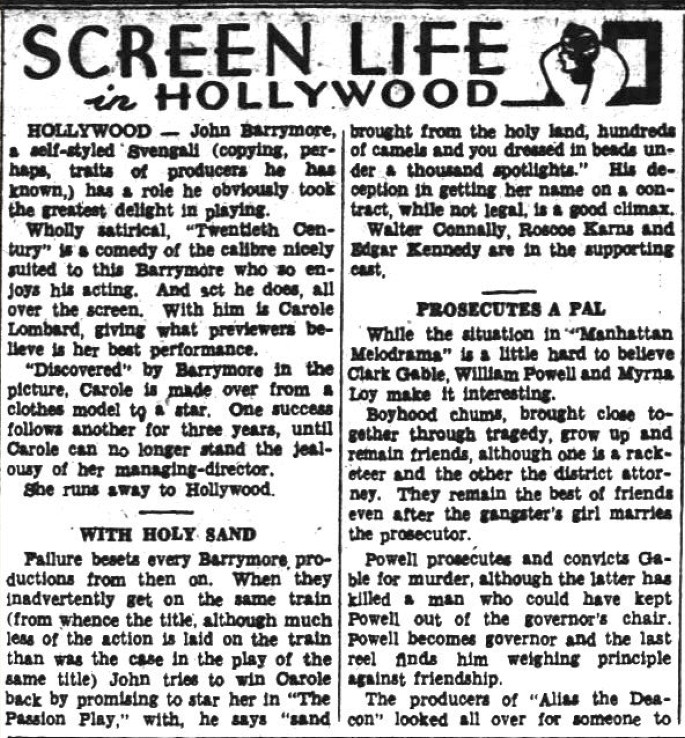 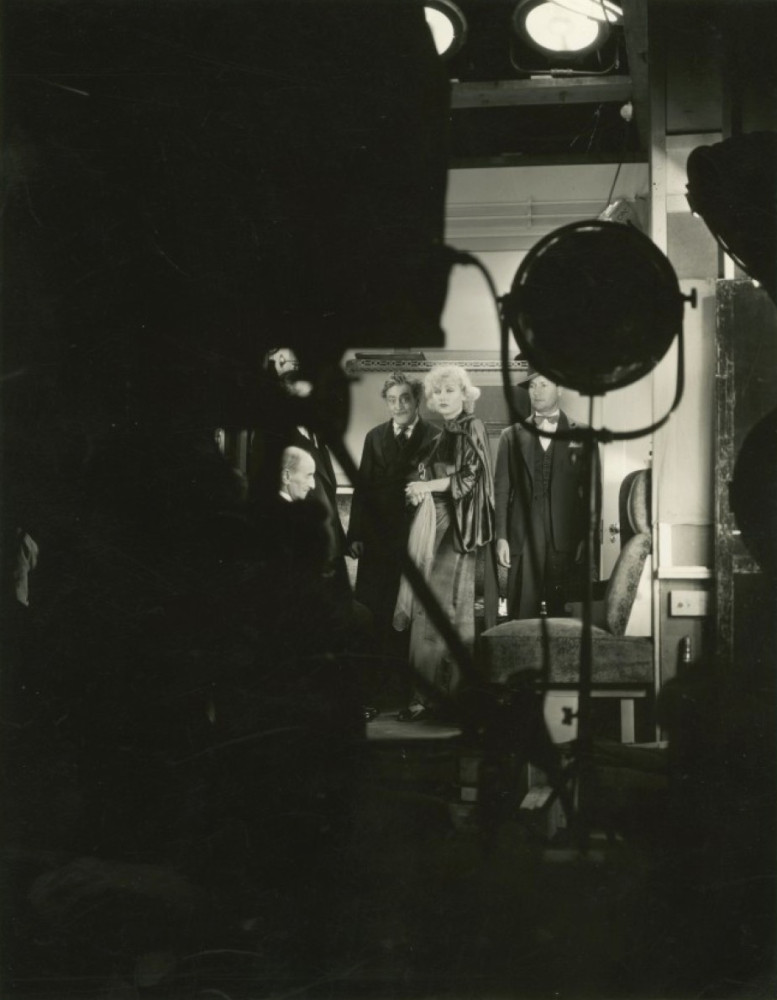 The May 13 Brooklyn Eagle even ran a piece (I'm guessing it was a Columbia handout) explaining how the "Twentieth Century" passenger rail set was constructed:

Of course, that wasn't the only Lombard movie making the rounds of theaters. "We're Not Dressing," from her home studio of Paramount, was still running -- and publicity stills from both films were at the top of the aforementioned Eagle page: 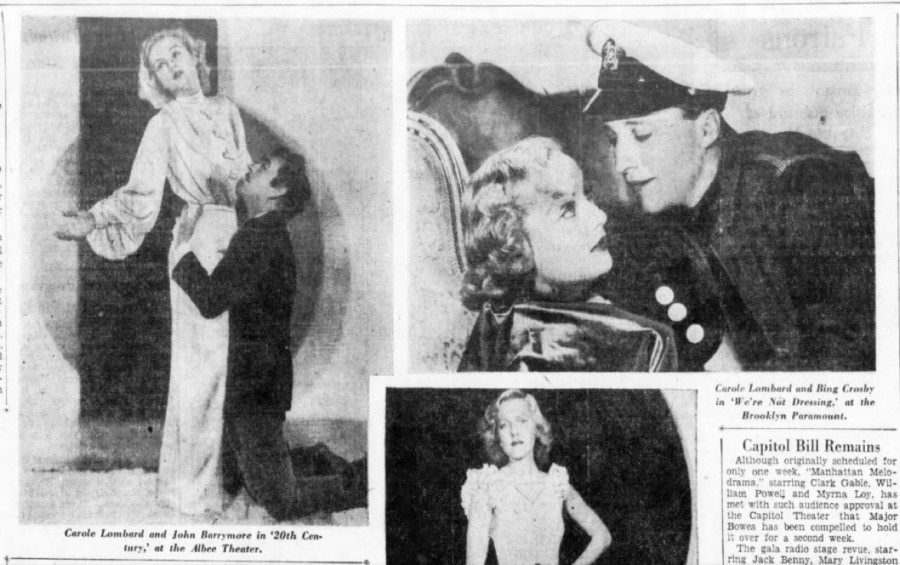 The Kossuth County Advance of Iowa, whose reviewer was diffident about Carole's performance in "Bolero" (http://carole-and-co.livejournal.com/683504.html), felt likewise about her in its May 10 review of "We're Not Dressing," calling her "beautiful at times, rather ordinary at others":

The college crowd, or at least that at New York's Barnard College, was similarly unimpressed. The reviewer in the May 1 Barnard Bulletin deemed Lombard "not particularly convincing," though it liked the film's goofy fun:

A week later, the Bulletin approves of "Twentieth Century," although Carole is mentioned only peripherally:

In Texas, this pic promoted "We're Not Dressing" in the May 6 Waco Tribune-Herald: 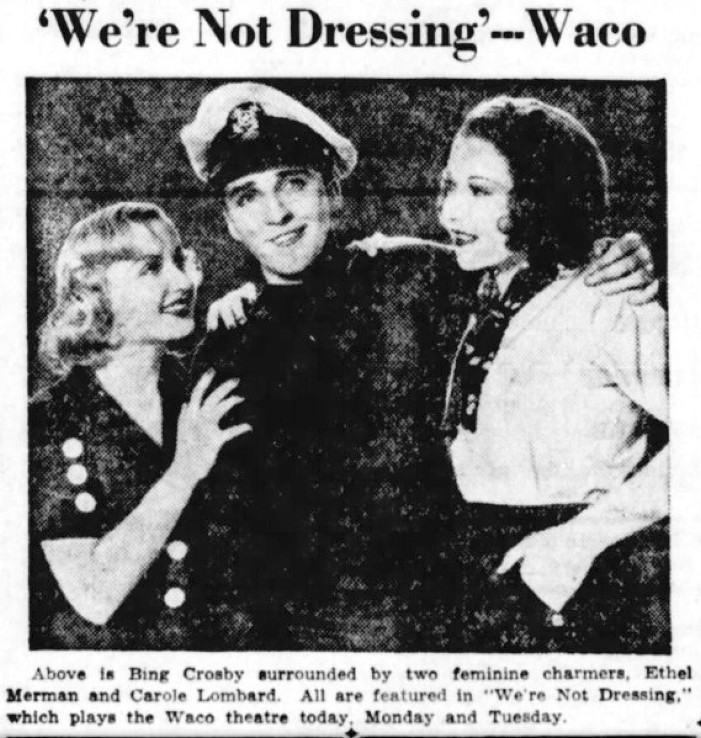 Lists of stars (most beautiful, best dressed, etc.) were a favorite topic of newspapers back in the day, and impresario Earl Carroll got into the act twice during May. In the May 3 Lowell (Mass.) Sun, he chose his 11 most beautiful women in the movies...and yes, Carole made the cut. (It's in the upper right-hand corner, next to a story about Jean Harlow the author.) 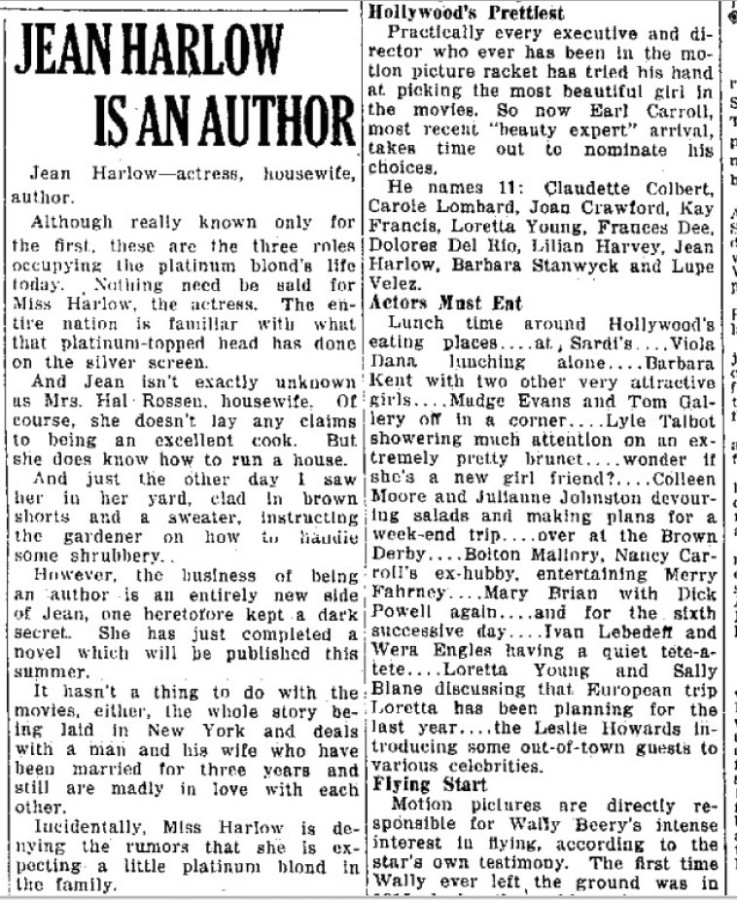 But that wasn't enough for Carroll. In the May 14 Indiana (Pa.) Gazette, he did himself one better by choosing 16 beauties, again including Lombard:

His selections met a wide variety of fates; Dorothy Dell died in an automobile accident in June and never made it out of her teens, while Gloria Stuart lived to see her centennial (and publicly celebrate it in Hollywood) before her passing in 2010.

Yet another list ran in the May 23 Sheboygan (Wis.) Press column "That's That":

This was about the time that the U.S. established diplomatic relations with the Soviet Union for the first time since the 1917 revolution.

Here's a segment of a Walter Winchell column that ran in the May 12 Reading (Pa.) Times:

What's interesting here is that Walter must have changed his mind about Lombard's legs, because in a later column he complimented Carole regarding them (http://carole-and-co.livejournal.com/377939.html). With summer on the horizon, those Lombard legs were seen in a still for swimsuits, as she suggested blondes wear black swimwear while at the pool or beach. This is from the May 8 North Adams (Mass.) Transcript: 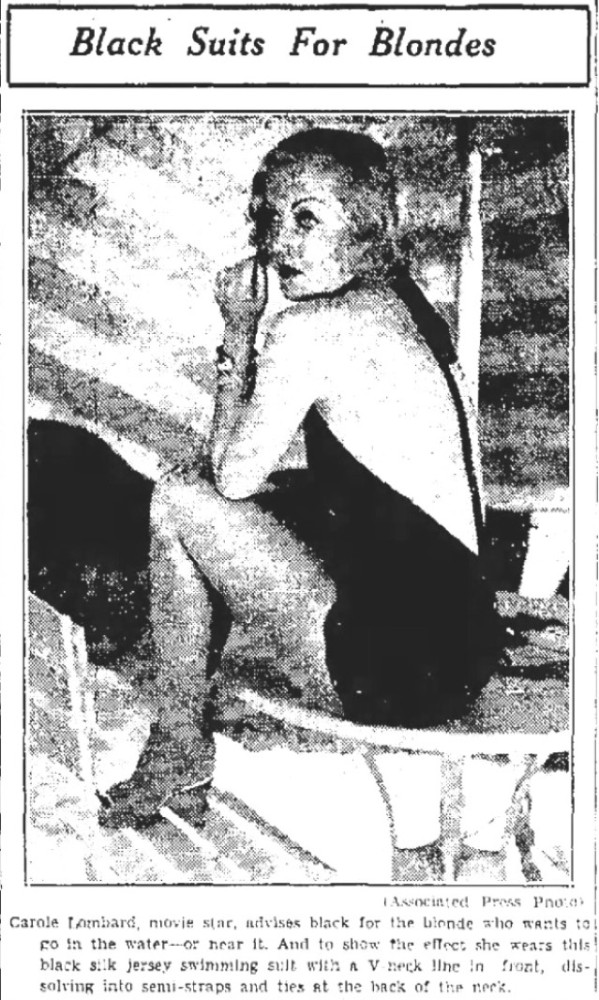 Another pic -- no to swimsuit, yes to sombrero -- ran in the May 29 Massillon Independent in Ohio:

And speaking of "You Belong To Me," had she made that film, those Lombard locks might have seen a different shade, according to the May 11 Oakland Tribune: 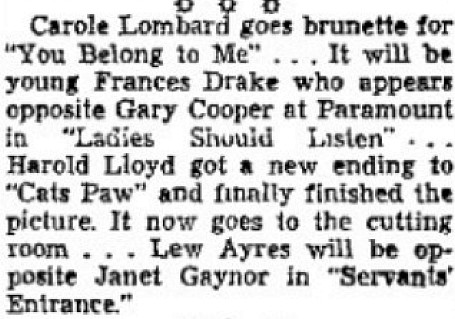 And five days later in the Fresno Bee, Louella Parsons' syndicated column said Carole would be back at Columbia for another movie, under the working (but thankfully only temporary) title "Orchids And Onions." (It became "Lady By Choice.")

Finally, here's a weird one from the May 15 Salt Lake Tribune -- the Orpheum Theater was seeking "a girl for special work who looks like Carole Lombard": 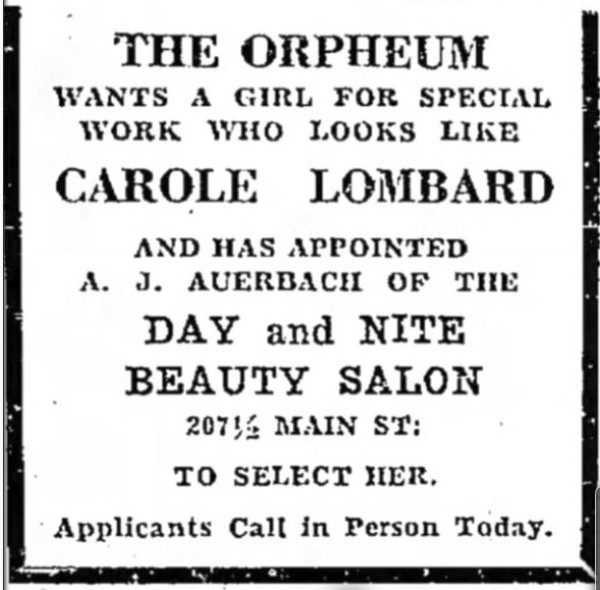 I have no idea if they found one, or what they did with her if one indeed was found, but it probably was meant in conjunction with this, if the ad from May 20 is indicative: 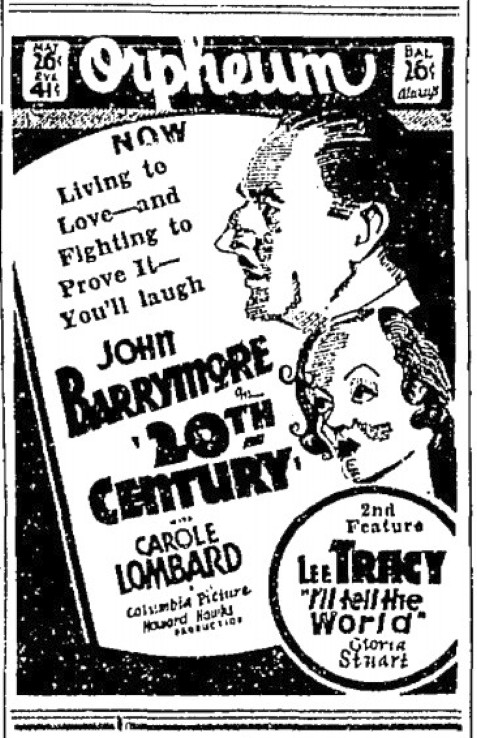