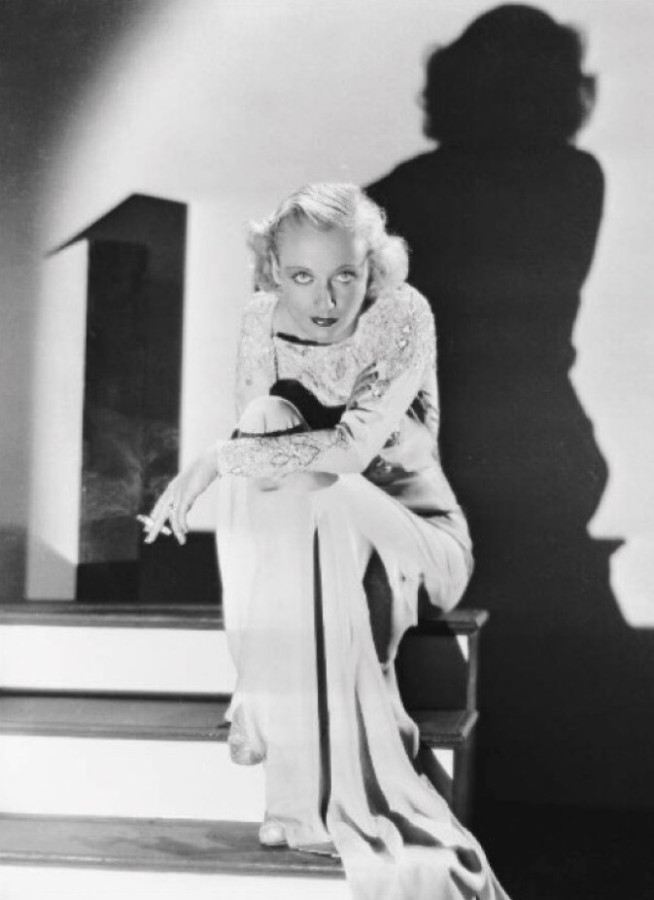 Recently, I've thought about this image of Carole Lombard in the context of its near-replication as part of a transportation mural at Union Station in Los Angeles, my likely future home (http://carole-and-co.livejournal.com/21500.html). But there's more to it...not in Lombard's pose, but in what she's wearing.

The photo was taken by Paramount's Otto Dyar in 1931 -- and the gown she's in was part of an auction of Hollywood memorabilia held last month in Beverly Hills by Julien's Auctions:

I apologize for not being on top of this at the time, but the backstory still makes for fine reading. (And unless my readership is far more upscale than I imagine, chances are none of you were going to end up with it anyway.)

First of all, here's what the gown looks like: 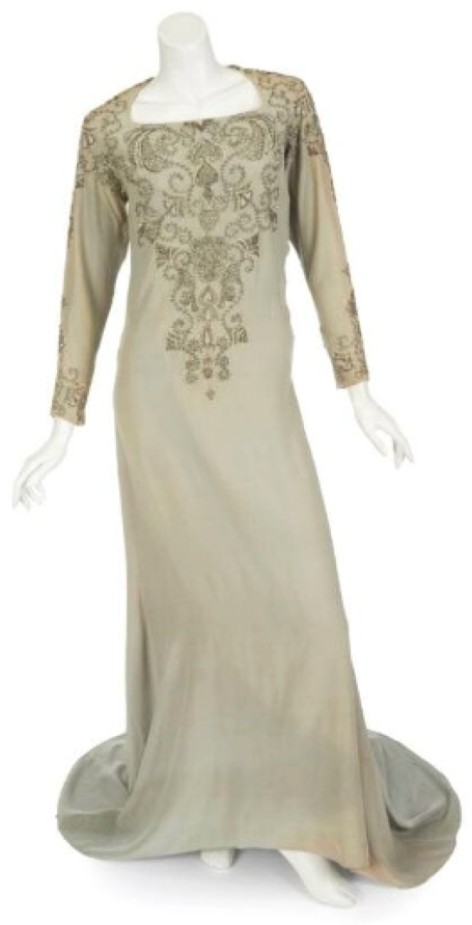 It's a pale green -- the designer of the mural, working off that Dyar black-and-white, envisioned it as sort of a beige-flesh color -- and as you can tell, the work is quite intricate (although largely invisible in the Dyar pose). Here's a closeup of the top: 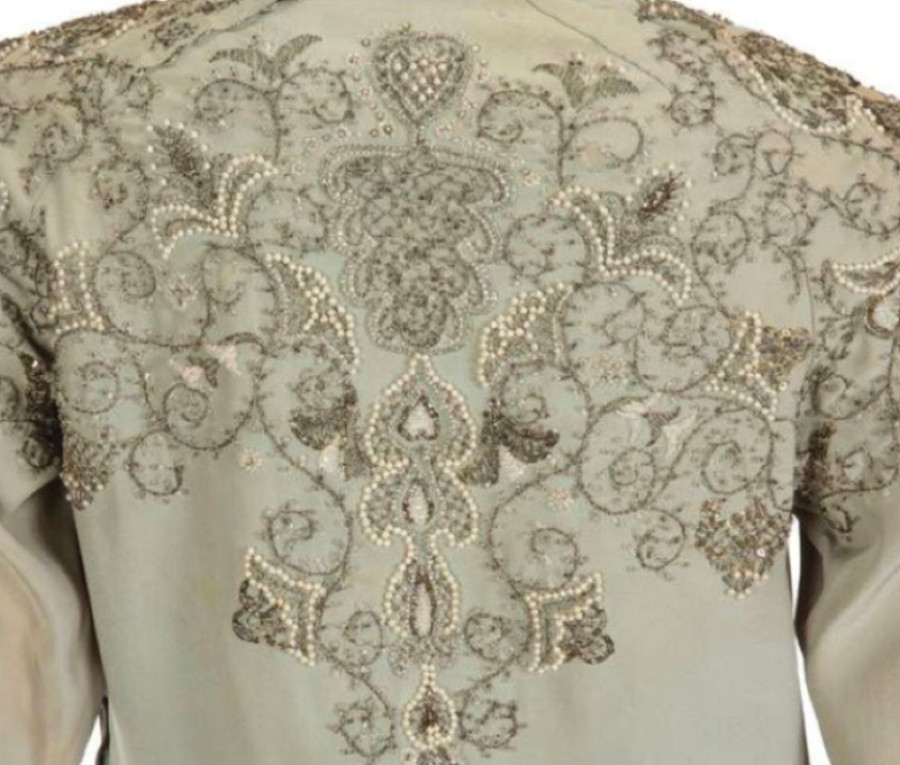 And here's how it was described in the auction guide: 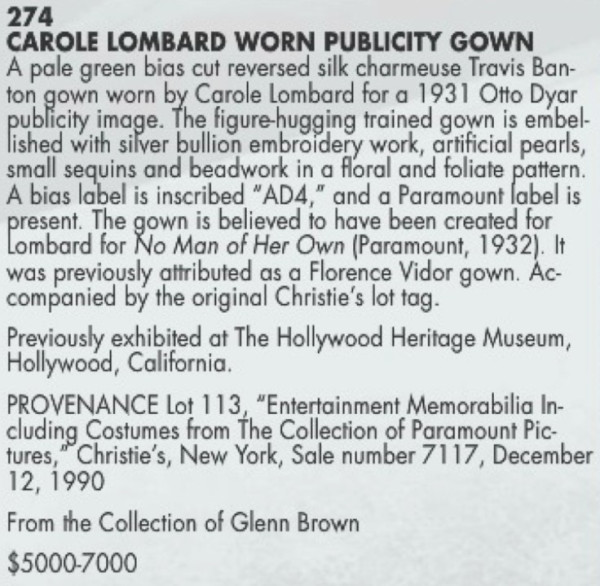 "The gown is believed to have been created for Lombard for 'No Man Of Her Own' (Paramount, 1932)." Er, probably not. Assuming the photo is indeed from 1931, at that time Carole had not been cast in that film, nor was it known by that name -- it was seen as a Miriam Hopkins vehicle called "No Bed Of Her Own" (http://carole-and-co.livejournal.com/6840.html). By the time Lombard became involved with the project, it was the latter part of '32.

I'm guessing "No Man Of Her Own" was confused with the somewhat similarly titled (and far more obscure) "No One Man," released in early 1932. However, I've never seen the gown in any stills from the actual film. Also note that the gown at first was associated with actress Florence Vidor before provenance tied it to Lombard.

The gown was among 99 lots from former MGM archivist Glenn Brown, who had bought the item at a Christie's auction in 1990 for $1,000.

The Los Angeles Times reported what then happened (http://www.latimes.com/entertainment/great-reads/la-et-c1-hollywood-auctions-20140514-story.html):

Although only about 10 people sat in the gallery — and few were bidding — a slight man in a yellow baseball cap perked up when the auctioneer called out Lot 274. He cradled an iPad, and the auction catalog in his lap was filled with neon Post-it notes.

The item, a pale green beaded gown worn by actress Carole Lombard, loomed large for Brown. He'd acquired the dress at a Christie's auction in 1990 for $1,000. At the time, it was described as having been worn by actress Florence Vidor in "Doomsday," he said. But Brown later researched the gown and found a publicity image of Lombard wearing it, establishing a higher-profile provenance.

Bidding began at $3,500 and increased in $250 increments. At first the contest was between several online and phone bidders, but most dropped out when the man in the yellow cap entered the fray at $6,000. From there, he went up against a bidder who was on the phone with [Julien's executive director Martin] Nolan.

The price shot past $10,000 and kept rising in $1,000 increments. The man in the cap signaled his bids with a nod, or by calmly raising his hand.

The phone bidder pressed on, and Nolan whispered into the microphone of his mobile phone's headset, keeping his client apprised.

When Nolan's bidder offered $27,500, auctioneer Tim Luke set his sights on the man in the cap.

The gavel cracked. Phone bidder No. 825 had won the dress.

But the man in the cap didn't come away empty-handed. He later won a costume from "Singin' in the Rain" for $3,250 and another worn by Julie Andrews in "Darling Lili" for $3,000, in addition to other items.

Bought for $1,000...sold 22 years later for more than 27 times that amount (and certainly the power of the Lombard name helped).

So, who came away with the gown? Hard to say, although several museums -- including the Hollywood Museum and the planned Academy of Motion Picture Arts and Sciences museum, the latter set to open in 2017 -- are said to be potential candidates for such items. Or it could be in the hands of a private collector. We will see.
Collapse