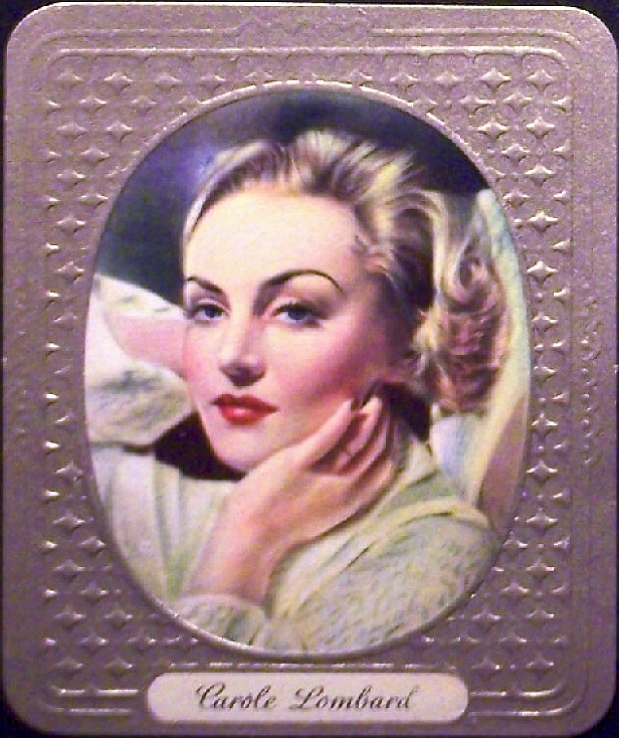 For fans of Carole Lombard and other stars of classic Hollywood, tobacco cards long have been a popular collectible, such as the famed Garbaty series from the early years of Nazi Germany, from which Lombard's 1936 card is shown above (http://carole-and-co.livejournal.com/205341.html). This entry concerns cards published by the London cigarette firm Carreras, and while they lack Garbaty's artistry, they do have one particular distinction for collectors...

Another thing that makes them unusual is that they were designed to be mounted on an album; they were printed on relatively thin stock and the backs had gummed surfaces (see the notation at the bottom of the reverse). Consequently, according to Cliff Aliperti of Immortal Ephemera, "singles are often seen with back damage and are prone to chipping along the edges." Nevertheless, the novelty of their oval shape makes them a collectors' favorite.

Aliperti has issued a checklist for all 72 cards in the series (Lombard was #4), along with their images. Here are a few, beginning with Myrna Loy, already in "perfect wife" mode:

My personal favorite image from the set, Claudette Colbert in stylish "Cleopatra" bangs:

Lombard's first husband, William Powell, in an artist's outfit presaging the part he would play in "Double Wedding," though that wouldn't be made until 1937:

Even a few horizontal ovals were issued, usually for multiple acts such as Laurel and Hardy (pictured) or the Marx Brothers, although the copy on the back remained in vertical mode:

As of this writing, Aliperti has 116 of these cards in his store, at prices ranging from $1.50 (generally for lower-quality duplicates) to $26 for the Laurel and Hardy card above and $10 for one of Jean Harlow. (The Lombard card goes for $6.50.) To see or buy the cards, as well as to view a checklist, go to http://immortalephemera.com/movie-collectibles/1934-carreras-film-stars-oval-tobacco-cards/.
Collapse