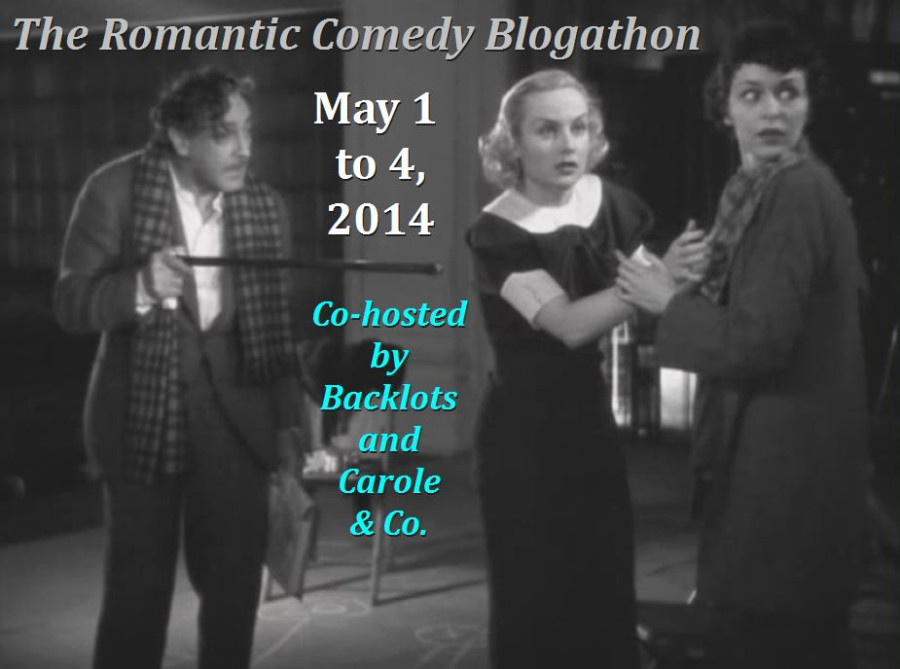 The Romantic Comedy Blogathon officially is over, and first of all, I wish to thank Lara Gabrielle Fowler of Backlots (http://backlots.net/) for helping to coordinate everything. Second thanks, of course, go to the bloggers who contributed items from May 1 to 4; a total of 27 entries arrived. In case you missed any of them, here they are, day by day, with links: 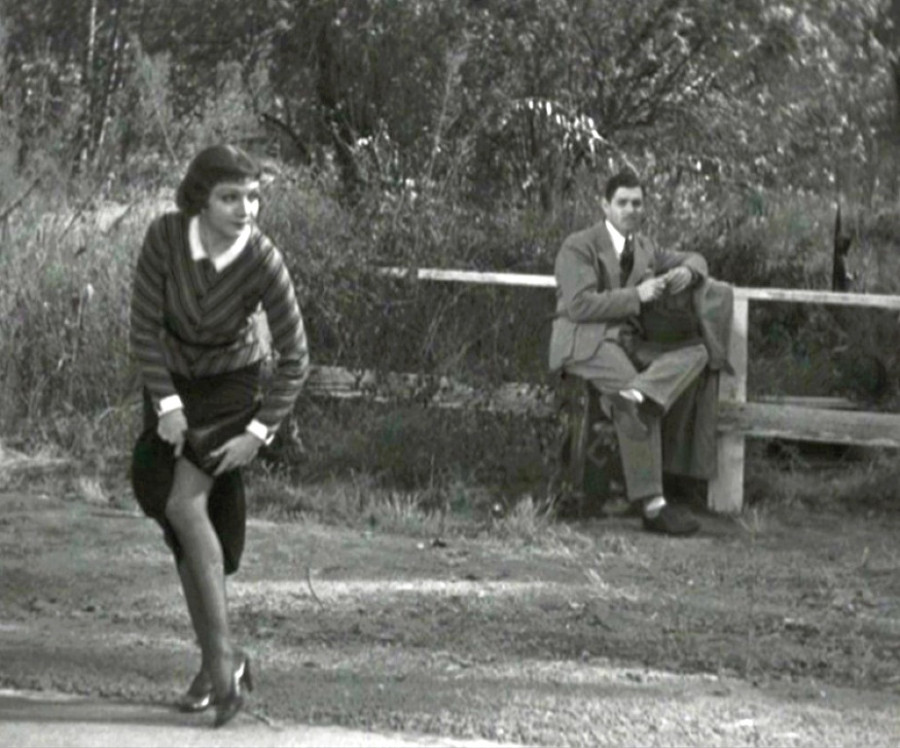 Stardust gets a leg up on the competition with a review of "It Happened One Night": http://bwallover.blogspot.ca/2014/04/the-romantic-comedy-blogathon-it.html

Another Frank Capra gem, "Meet John Doe" (from Barbara Stanwyck's golden year of 1941), gets the treatment at Critica Retro: http://www.criticaretro.blogspot.com.br/2014/05/adoravel-vagabundo-meet-john-doe-1941.html

Which leads into another stellar sample of Stanwyck '41, "Ball Of Fire," from the curiously named blog Cary Grant Won't Eat You: http://carygrantwonteatyou.com/englishmajors-balloffire/

"Monkey Business" is covered at The Man On The Flying Trapeze, but which version? Hint: It stars the man listed in the entry above: http://moviedavid.blogspot.com/2014/05/my-romantic-comedy-blogathon-entry.html

One of just about everyone's favorite romantic comedies, "The Awful Truth," is served up by Mildred's Fatburgers: http://www.mildredsfatburgers.com/1/post/2014/05/the-road-to-reno-is-paved-with-suspicions.html

The Blonde at the Film looks at the popular homefront romantic comedy "The More The Merrier": http://theblondeatthefilm.com/2014/05/01/the-more-the-merrier-1943/

Oh, and finally some guy decided to write about some Carole Lombard film called "Lady By Choice": http://carole-and-co.livejournal.com/691567.html 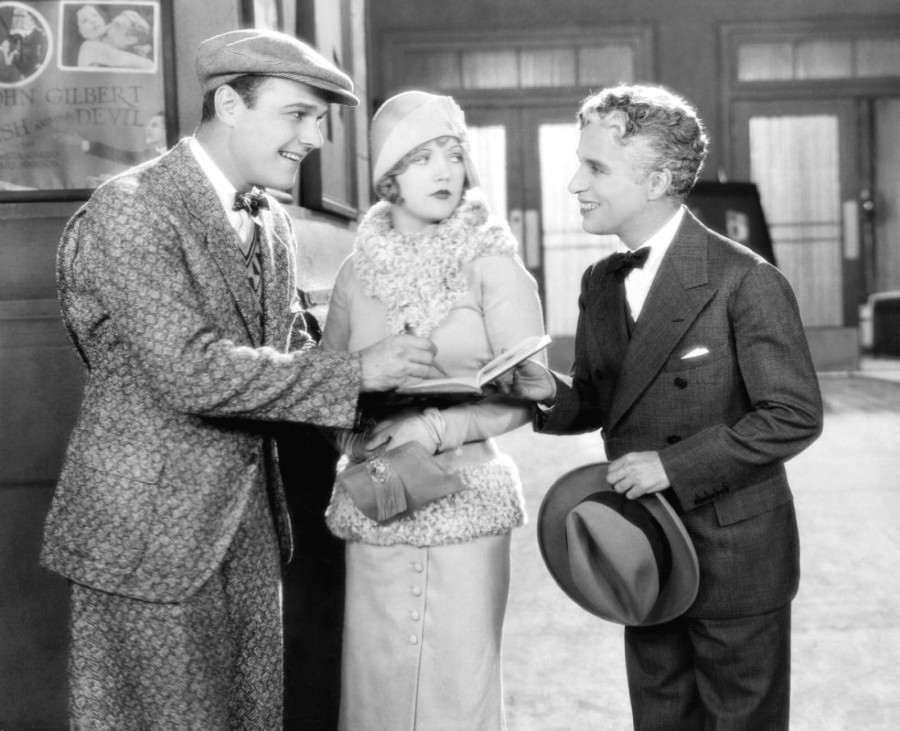 Silver Screenings writes about Marion Davies' 1928 masterpiece with King Vidor, "Show People," one of the best (and funniest) movies about the movies: http://silverscreenings.org/2014/05/01/the-science-of-romantic-comedy/

Can a romantic comedy feature a couple already happily married? If they're portrayed by William Powell and Myrna Loy, the answer unquestionably is "yes," as the Classic Movie Hub's entry on "The Thin Man" makes evident: http://www.classicmoviehub.com/blog/the-romantic-comedy-blogathon-the-thin-mans-perfect-marriage/

The 85th anniversary Audrey Hepburn's birth was yesterday (as you so learned if you used Google), and the romantic comedy icon's vehicle "Sabrina" is the subject of the Joy and Agony of Movies: http://lipranzer.wordpress.com/2014/05/02/romantic-comedy-blogathon-sabrina/

"Footlight Serenade" can be confused with the similarly titled "Footlight Parade," but the former is 1942 Twentieth Century-Fox, not 1933 Warners, and we see Betty Grable dance instead of James Cagney (both dance wonderfully, but her legs are nicer to look at). Caftan Woman serenades us with this entry: http://caftanwoman.blogspot.ca/2014/05/the-romantic-comedy-blogathon-footlight.html

"Over 21," a mid-forties romantic comedy, isn't as well remembered as it should be, and I See A Dark Theater sets us straight: http://www.iseeadarktheater.com/#!over-21-5-2-14/c21ev

The Hitless Wonder Movie Blog looks at a Joan Blondell comedy that literally isn't hitless (and is just plain politically incorrect some eight decades after its release), "Smarty": http://dandayjr35.blogspot.com/2014/05/smarty.html 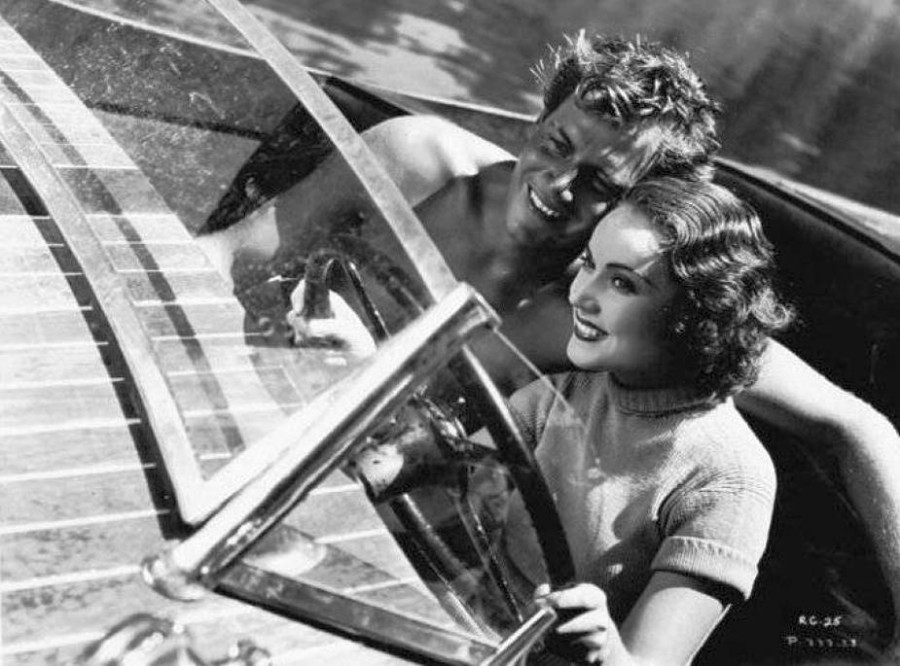 Imagine Cary Grant, James Stewart and Katharine Hepburn in the same movie...well you don't have to imagine, because it was called "The Philadelphia Story." And it's examined, appropriately enough, by ImagineMDD: http://www.imaginemdd.blogspot.com/2014/05/the-philadelphia-story-and-features-of.html

A lesser-known film of Kate's -- 1945's "Without Love" -- gets the treatment from the site The Great Katharine Hepburn: http://margaretperry.org/10-things-to-love-about-without-love-1945/ 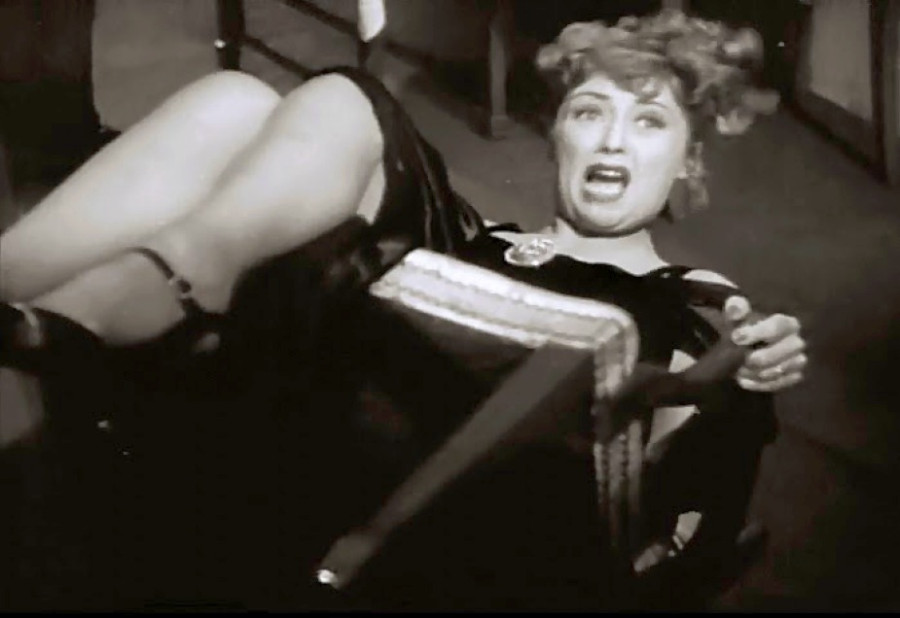 Joan Blondell usually enjoyed showing off her shapely legs, but as a Nora Charles clone in the 1938 Columbia mystery-comedy "There's Always A Woman" with Melvyn Douglas, this time probably wasn't one of them. Tales Of The Easily Distracted looks at this movie at http://doriantb.blogspot.com/2014/05/theres-always-woman-blondell-ambition.html.

If Douglas was an ersatz Powell in that film, he got an opportunity to fill in for the ailing Bill -- opposite Greta Garbo and directed by Ernst Lubitsch, no less! -- in the 1939 classic "Ninotchka." Learn more about it from The Vintage Cameo: http://www.thevintagecameo.com/2014/05/ninotchka-1939/.

The Merry Widow Waltz looks at another Lubitsch film, 1943's "Heaven Can Wait," at http://randompicturesblog.net/2014/05/04/the-merry-widow-waltz-lubitschs-heaven-can-wait/.

How about three in a row from the man with the "touch"? However, this Lubitsch gem is a silent, 1917's "The Merry Jail," described by Movies Silently at http://moviessilently.com/2014/05/04/the-merry-jail-1917-a-silent-film-review/

Jumping from jail to Yale (as in ale), we have yet another Stany masterpiece from '41, Preston Sturges' "The Lady Eve," courtesy of Girls Do Film: http://girlsdofilm.wordpress.com/2014/05/04/the-lady-eve-barbara-stanwyck-and-henry-fonda/

"Born Yesterday" is the subject of this entry from Journeys In Classic Film: http://journeysinclassicfilm.com/2014/05/05/born-yesterday-1950/

Remember when a coat tossed out a window became a subplot of a "Seinfeld" episode? About six decades earlier, that idea was employed in "Easy Living," one of Jean Arthur's best-loved films, and Thrilling Days Of Yesteryear tells us all about it: http://thrillingdaysofyesteryear.blogspot.com/2014/05/the-romantic-comedy-blogathon-easy.html

Here's a comedy filmed in 1941 but not released for a few years because the play it was based on still ran on Broadway. We're referring to "Arsenic And Old Lace": http://amysrib.blogspot.com/2014/05/the-romantic-comedy-blogathon-arsenic.html

As it turned out, I wasn't the only one to do an entry on a Lombard film. "Hands Across The Table" got the treatment from All Good Things: http://poohtiger-allgoodthings.blogspot.com/2014/05/the-romantic-comedy-blogathon-hands.html

Finally, Davies' cinematic swan song, "Ever Since Eve," is reviewed by Lara at Backlots: http://backlots.net/2014/05/04/the-romantic-comedy-blogathon-ever-since-eve-1937/

Again, thanks to all who took part -- and perhaps before the year is out, we'll run another blogathon.

We double our pleasure, double our fun not with gum, but with Carole (plus Carole) through the mirrored magic of George Hurrell in Paramount p1202-409, our latest Lombard LiveJournal header.
Collapse