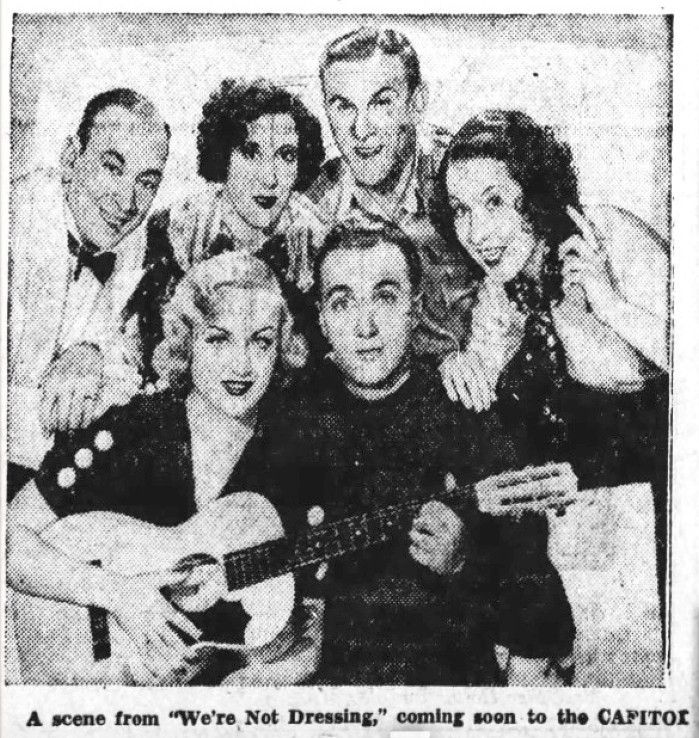 "We're Not Dressing" was the latest Carole Lombard film sweeping the country in April 1934, though that promotional photo above clearly is not a scene from the movie, no matter what the April 27 Altoona Mirror would have you think. (That befuddled image of Bing Crosby, holding the neck of a guitar Lombard obviously isn't playing, calls to mind his priestly roles of a decade later.)

That day, the Syracuse Herald ran an ad for the film, playing at the Paramount Theater downtown: 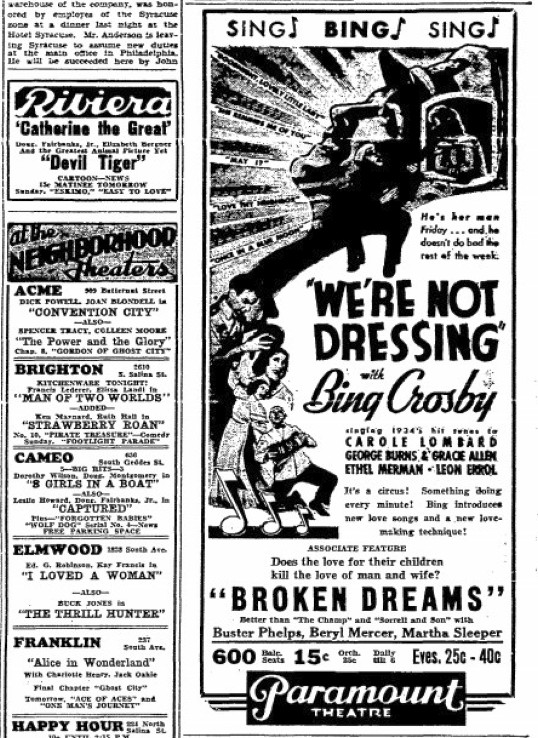 ("Bing introduces new love songs and a new love-making technique!" Even in the pre-Code era, audiences didn't expect too much. Actually, if I could travel back in time some 80 years, I'd probably head over to the Acme to see the long-lost "Convention City," a pre-Code holy grail.)

Also on that page was this Lombard anecdote: 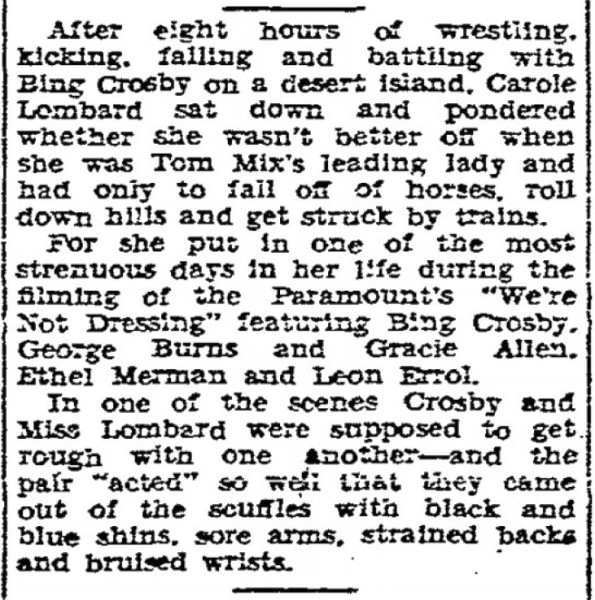 (Back in the silent day, she'd been a leading lady for Buck Jones' quickie westerns, not those of Tom Mix.)

Actually, much of Carole's time that month was spent in radio studios, not those of motion pictures, though all three of her appearances were movie-related. (Transcontinental radio hookups were relatively rare in 1934 because line costs were prohibitive; that would change soon, and Hollywood exploded into a broadcast center.) On April 2, she was on CBS with Crosby, a show broadcast at 8:30 p.m. over WJAS in Pittsburgh and listed in that day's Uniontown News Standard:

The following Sunday, she appeared on NBC, including its powerful New York flagship WEAF, alongside John Barrymore (more on that later). It was noted as a highlight of the broadcast day in the April 8 Brooklyn Eagle (a newspaper where my grandfather once was a reporter): 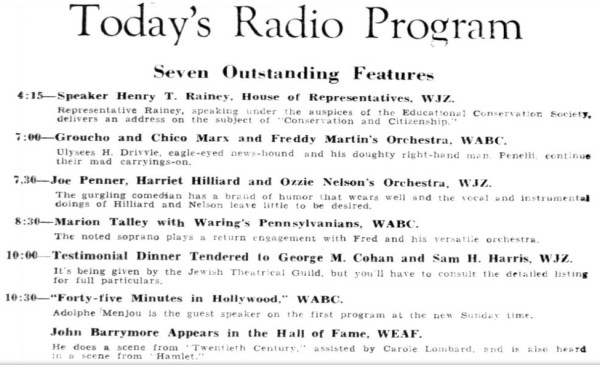 Carole was so in a hurry to work with Barrymore that she ran afoul of the law, according to the April 9 Ogden (Utah) Standard-Examiner: 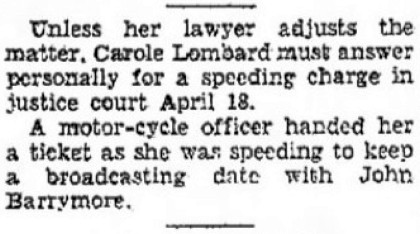 And on April 25, she was heard on another CBS hookup, this time with vaunted gossip doyenne Louella Parsons. The show's sponsor, a foundations company, ran ads across the country similar to this one that ran in the April 24 Oakland Tribune:

We have no recording or transcript of the broadcast (it may well have been scripted, as often was the case for interview programs at that time), but Louella may well have asked Lombard about her vacation...if she indeed had taken one. According to Parsons' Hearst column that ran in the April 9 non-Hearst Fresno Bee, Carole was about to embark on one: 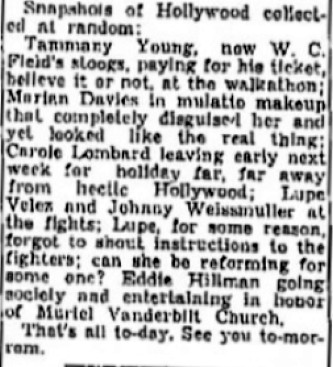 (Marion Davies as a mulatto? Must have been shooting "Operator 13." And Louella certainly wasn't going to skip coverage of her boss's honey.)

As usual, there was lots of newspaper talk about upcoming Lombard film projects. One of them was noted by Parsons herself in the April 4 Reading (Pa.) Times: 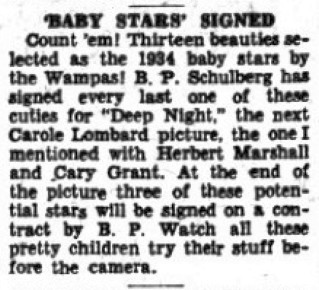 The following day, the Syracuse Herald's film writer explained the situation in a bit more detail:

Paramount WAMPAS "baby stars" vs. Fox "screen debutantes"? With Alice Faye and Claire Trevor, it appears Fox had the better bunch. This may explain why this was the final year for the "baby star" concept; there was no "kiss and make up" where WAMPAS was concerned.

And while Lombard was to report to Paramount for wardrobe fittings for the film, according to the April 8 Lincoln Star...

...there ultimately would be no "Kiss And Make Up" in her future, as we learned on April 22 in the Zanesville (Ohio) Signal: 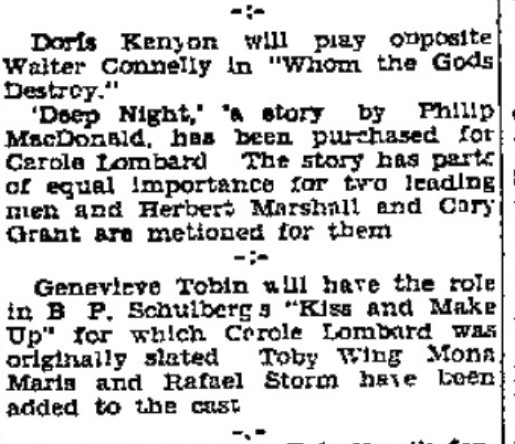 Or "Deep Night," either. 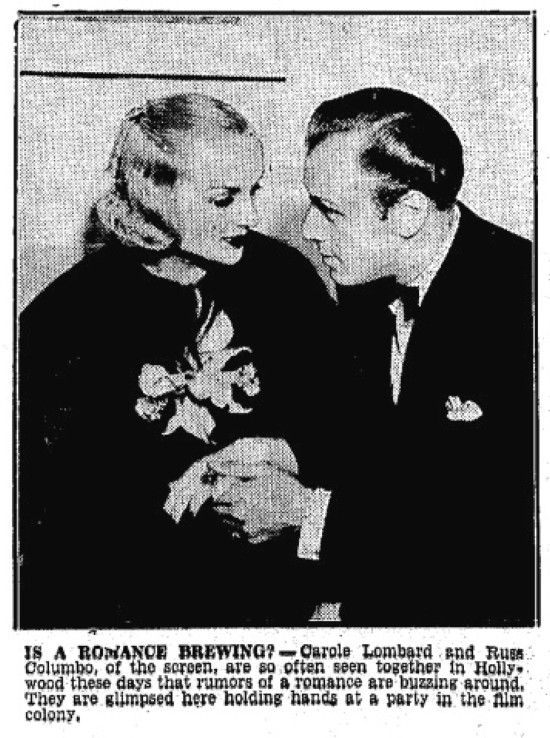 Lombard and Russ Columbo were a hot item in April 1934, as this pic from the April 16 Huntingdon (Pa.) Daily News indicates, and in fact they were witness to a fire earlier that month...or what was left of one, as Parsons reported in the April 3 Reading Times:

The Ice Palace was at the corner of Vermont and Melrose. A new ice facility, the Polar Palace, was built in Hollywood and it too was destroyed by fire in May 1963.

Some other Carole odds and ends from the month. She was part of two movie comic panel columns, first in the April 2 Rhinelander (Wis.) Daily News (where we discover her good friend Kay Francis -- known for portraying fast women -- had been, like Lombard, a track star in her youth): 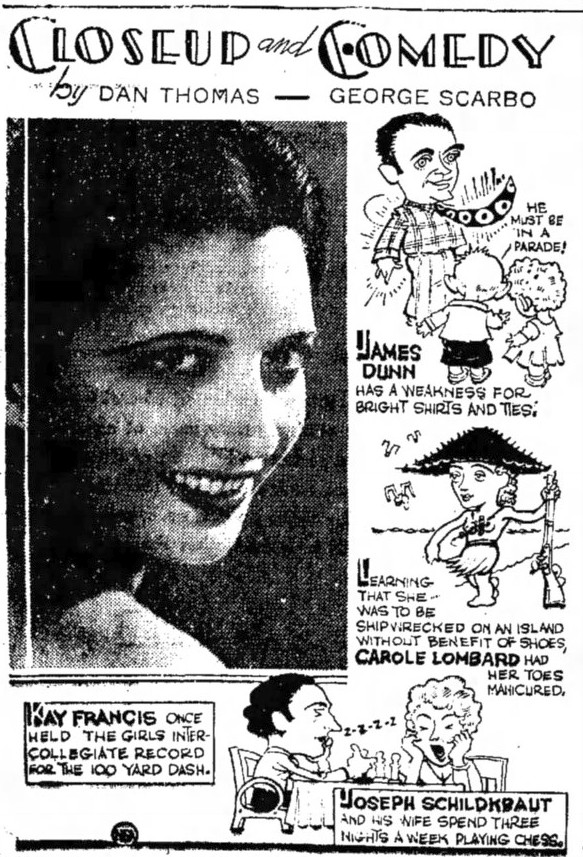 The next ran April 9 in the Lincoln Evening Journal, when we learn about Lombard's backside getting a literally icy reception: 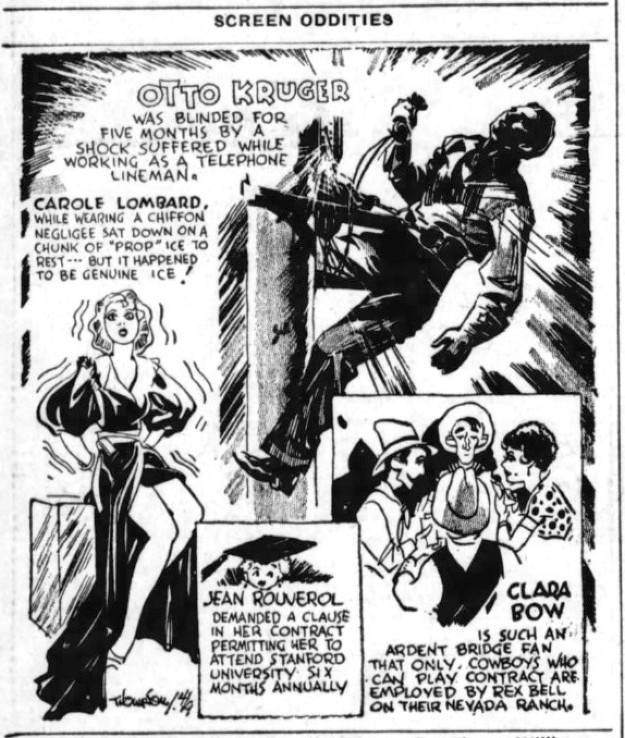 The April 9 Lowell Sun listed Lombard among the best-dressed actresses in Hollywood, but a survey of filmland designers gave top honors to Norma Shearer: 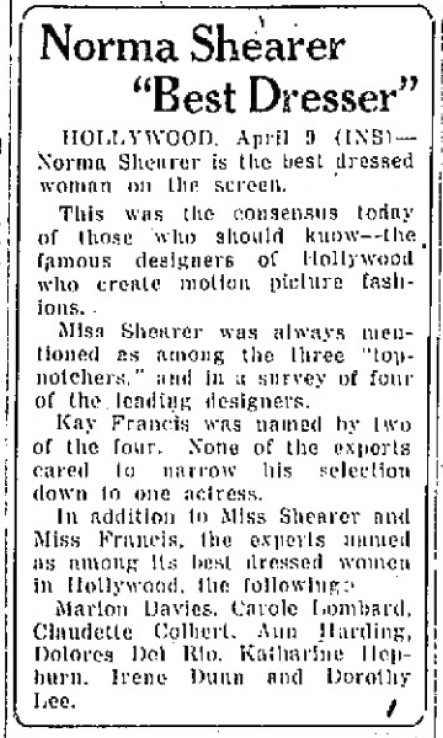 We mentioned "We're Not Dressing" at the top of this entry. Carole, who had already gained a reputation in the industry for enhancing scripts, helped suggest some dialogue changes, the Syracuse Herald reported on April 29:

Nevertheless, the film was coolly received on April 30 by the reviewer for the Wisconsin State Journal in Madison:

"...one of the most inexpressive blondes of the screen today"? Ouch!

Carole likely would have been happier seeing this review of her newest film, "Twentieth Century," that ran in the April 27 Emporia Gazette in Kansas (the newspaper whose longtime editor was the esteemed journalist William Allen White). But since this was a syndicated piece from Robbin Coons, Lombard probably did see it...and so did readers if they weren't distracted by the ad for "scanties": 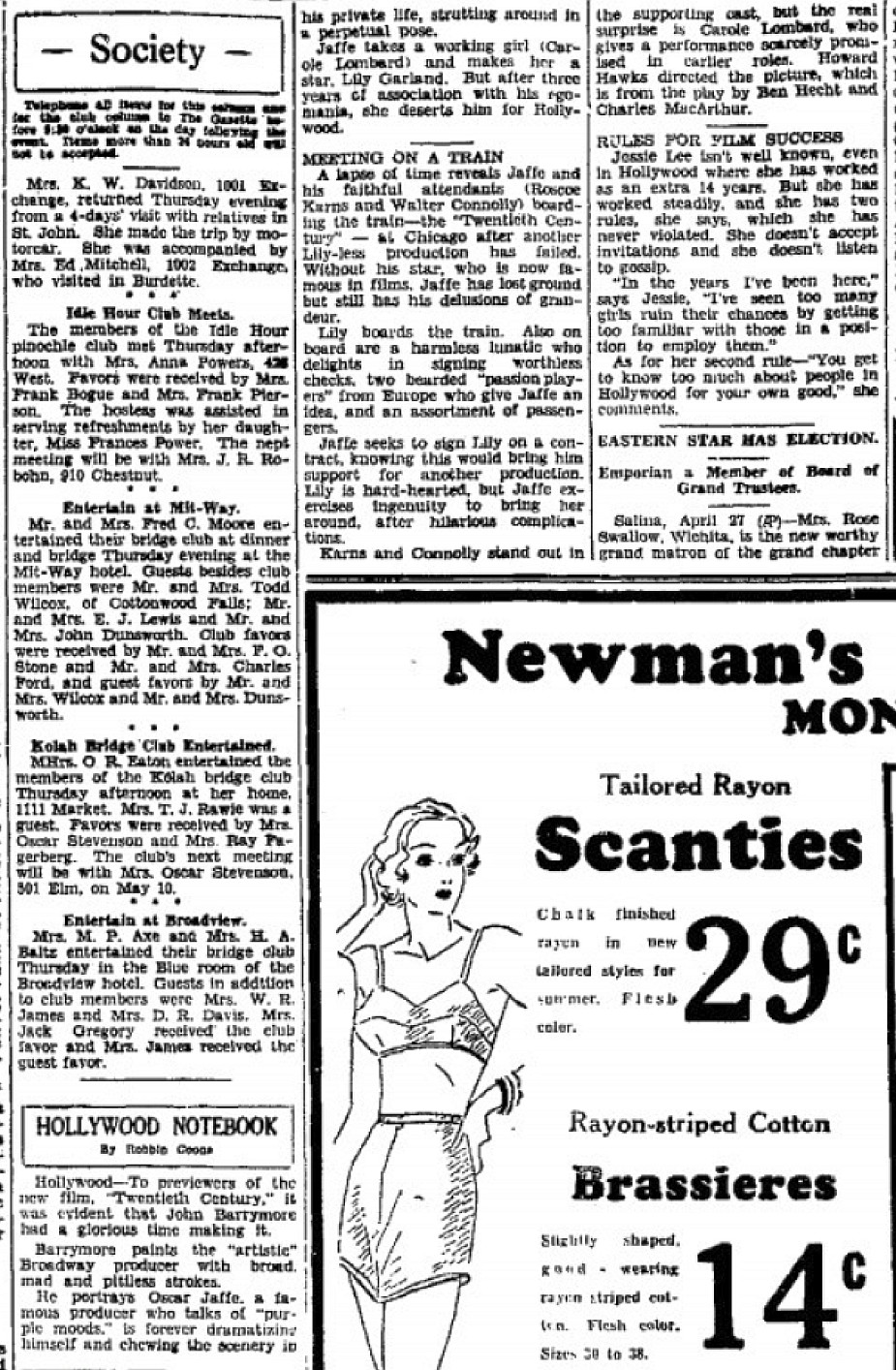 "Twentieth Century" signaled the Lombard of the future -- and most of the world would glimpse that future beginning in May.
Collapse