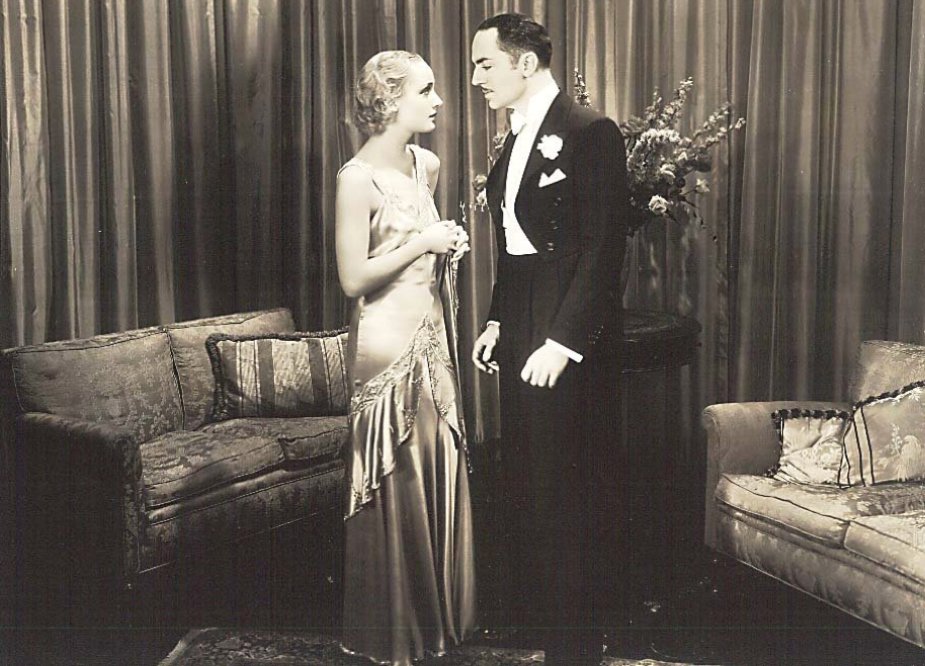 A few months after working with William Powell on "Man Of The World" in early 1931, Carole Lombard married him, no doubt entranced by his urbane voice. Powell, as Roger Ebert would describe decades later, "is to diction what Fred Astaire is to dance."

But few moviegoers were aware of that voice unless they had seen Powell perform on the stage; in silent cinema, his persona was distinctly different, more often than not that of a villain. Here's the story of the film that changed his career forever, thanks to the excellent site Greenbriar Picture Shows (http://greenbriarpictureshows.blogspot.com/), which presents plenty of marketing background behind classic Hollywood. 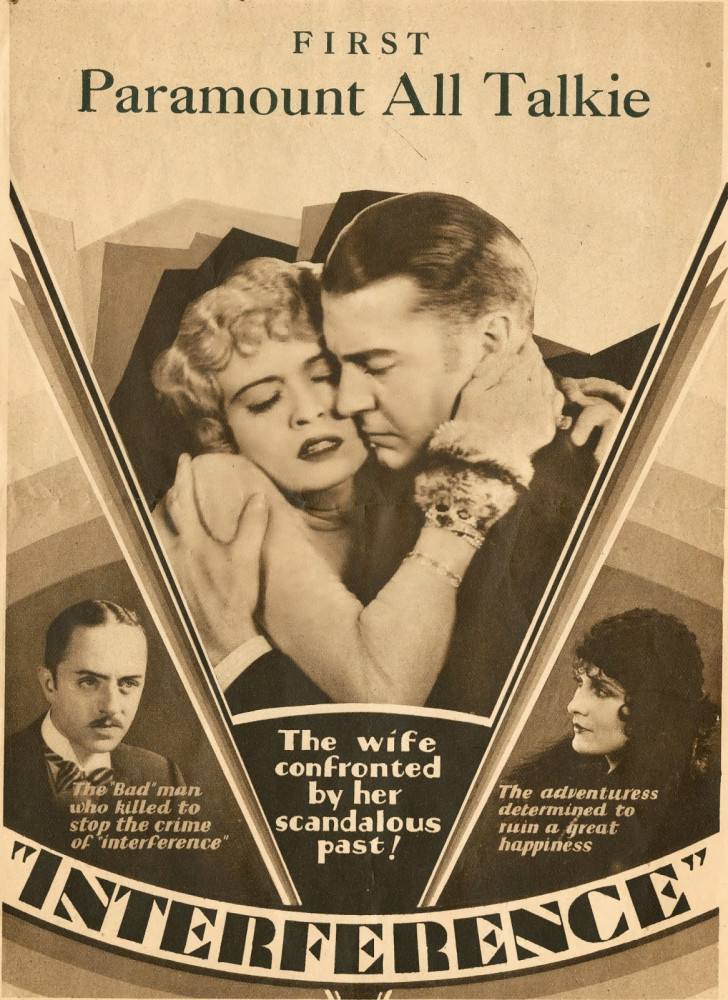 Paramount entered the all-talking field with the premiere of "Interference" at the famed Carthay Circle theater in Los Angeles on Nov. 5, 1928, the day before the presidential election between Republican Herbert Hoover and Democrat Al Smith and a mere 3 1/2 months since Warners' "Lights Of New York" became the first all-talkie release. (It was a huge success despite being a poor film, throwing all of Hollywood into turmoil.) As relatively few theaters, nearly all of them big-city picture palaces, had been wired for sound, Paramount -- which initially planned to issue "Interference" solely as a silent -- decided to give it dialogue as well. A story in Motion Picture News from October 1928 gave an idea of the difference between a silent and sound treatment:

The director of the silent version was Lothar Mendes, whom later would direct Powell and Lombard in "Ladies' Man" and whose later credits included "The Man Who Could Work Miracles." Handling the sound version was someone with a respected background -- Roy Pomeroy, technical director for "The Ten Commandments" in 1923 who also assisted on films such as "Wings." In fact, he was among the 36 founders of the Academy of Motion Picture Arts and Sciences. He had gone east to learn more about sound from Western Electric officials, and once Pomeroy returned, he was given the assignment.

Pomeroy may have been a fine technical director, but as far as helming a motion picture was concerned, he was out of his league. This nearly four-minute segment from "Interference" will make that evident; even by early sound standards, it's primitive and creaky: 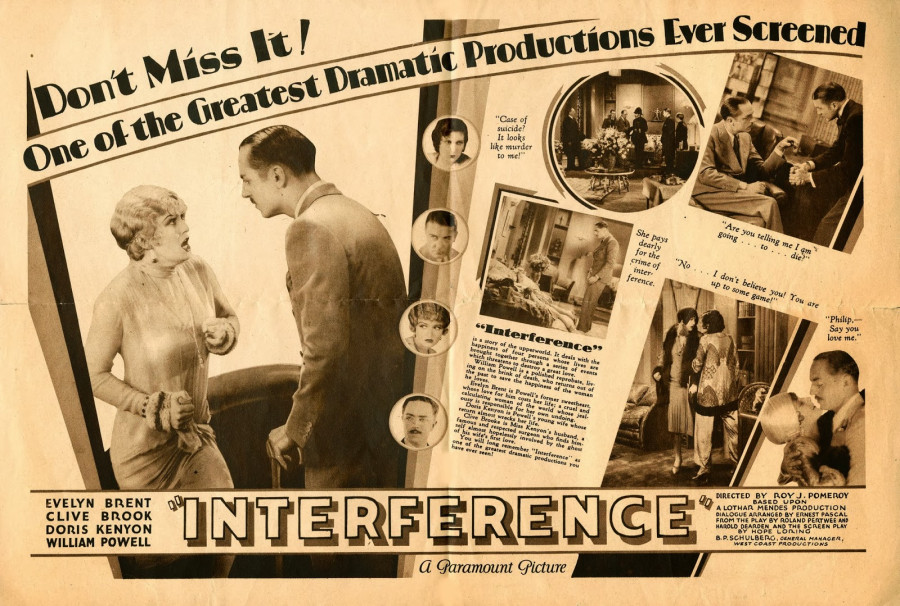 This by itself wasn't a revelation about Powell's rich speaking voice, as it's obvious his style is stymied by the film's slow pace. His co-star in that scene, Evelyn Brent, won most of the plaudits at the time. However, the other female with a starring role, Doris Kenyon, who had been a silent leading lady of some renown, even working opposite Rudolph Valentino (in fact, Doris Day, who turned 90 yesterday, was named Doris in her honor at birth), fell out of favor in talkies, largely unable to restrain her silent-style movement on screen, and wouldn't return to film until 1930, when she took much smaller roles. Powell's not in this six-minute clip, but Brent, Kenyon and Clive Brook are:

Paramount quickly realized Powell's pipes could make him believable as characters beyond rogues, and in his next film, "The Canary Murder Case," he made the first of his four appearances as detective Philo Vance. By late 1928 standards, "Interference" indeed was a step forward in sound, for which the film press praised Paramount: 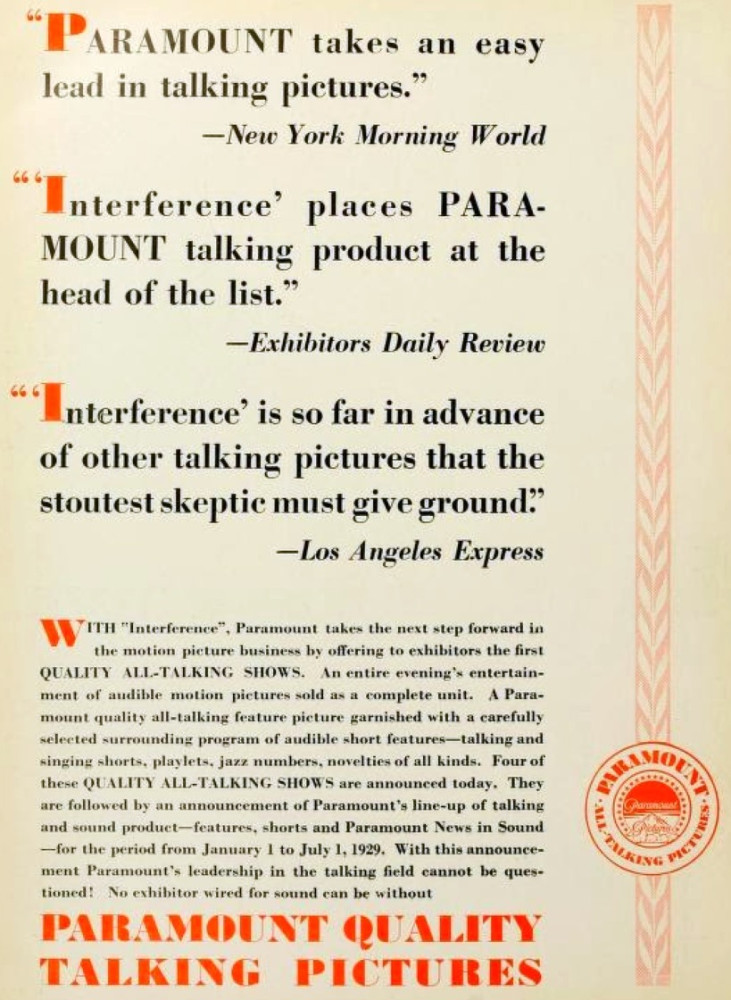 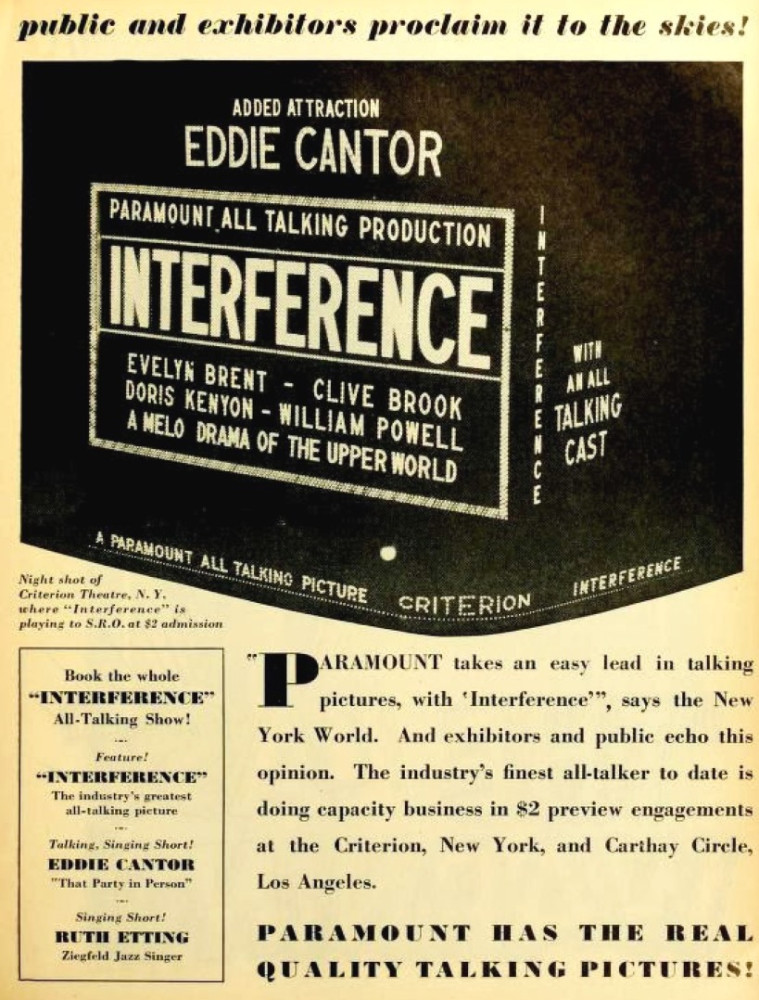 Oh, and note that the Eddie Cantor and Ruth Etting performances in New York were on film, not the stage.

As for Pomeroy, he got his comeuppance. He successfully coerced Paramount to raise his salary tenfold, from $250 to $2,500 per week. When he tried to increase it to $3,500 per week in the wake of the success of "Interference," Paramount figured it could teach its actual directors the ins and outs of filming talkies and Pomeroy became yesterday's news. He would direct only two more films before his death at age 55 in 1947.

"Interference" survives and was part of the 1958 Paramount film package for TV syndication, but has never received an official video release.
Collapse