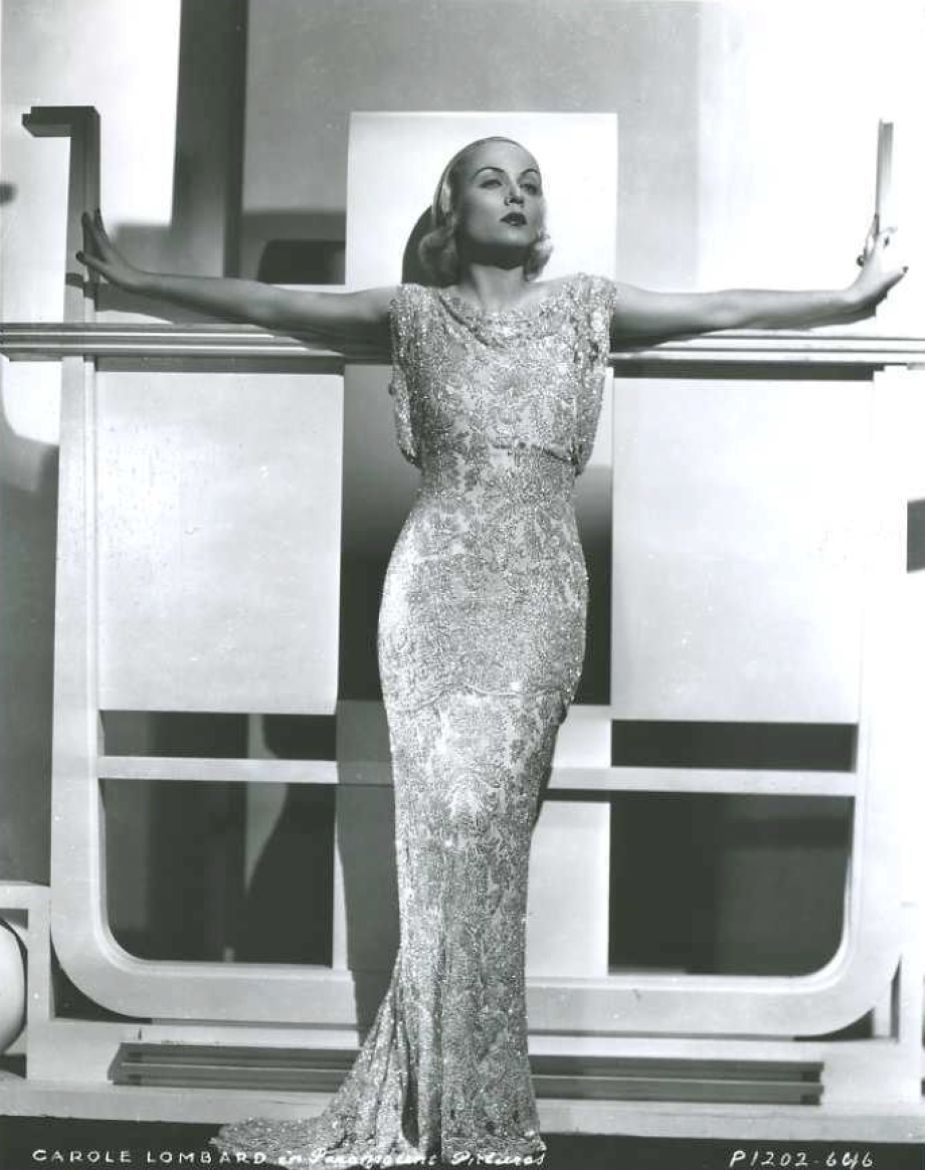 Just as Carole Lombard stretched out her arms for this pose in Paramount p1202-646, so was she stretching -- both professionally and personally -- in March 1934, about the time this portrait was taken. Now more than half a year following her divorce from William Powell, Lombard was asserting herself as a woman on her own...and for a Hollywood leading lady, that meant finding her own house. Carole briefly resided in Beverly Hills, but in early 1934, she decided on a new abode -- a Hollywood Boulevard home that would become identified with this, the most vivacious period of her life.

And according to a story the Winnipeg Tribune ran on March 3, this home was awash in a personality indicative of her hair shade: 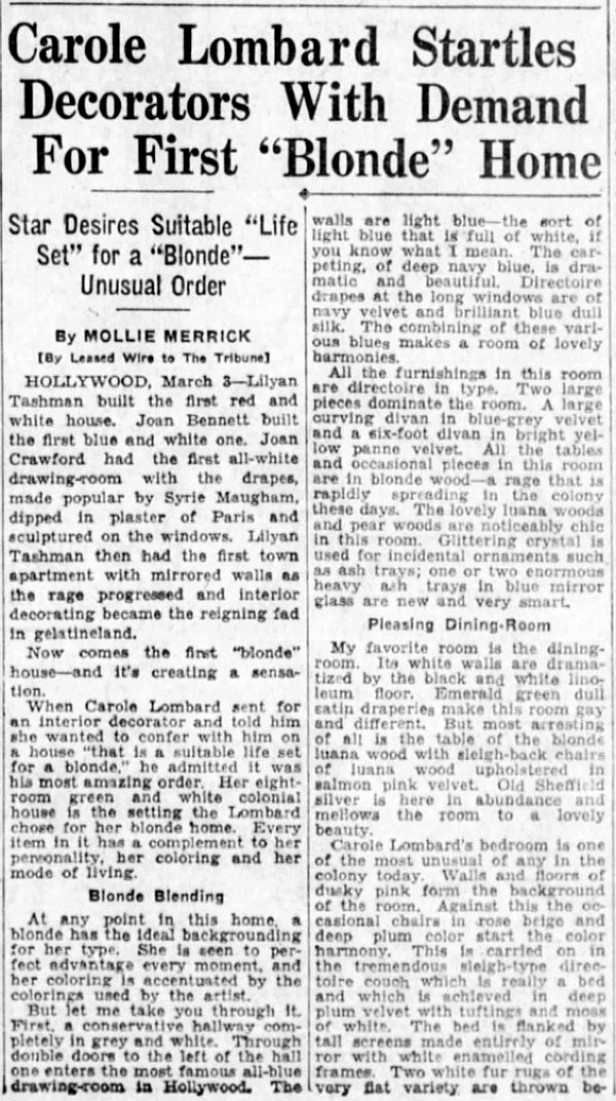 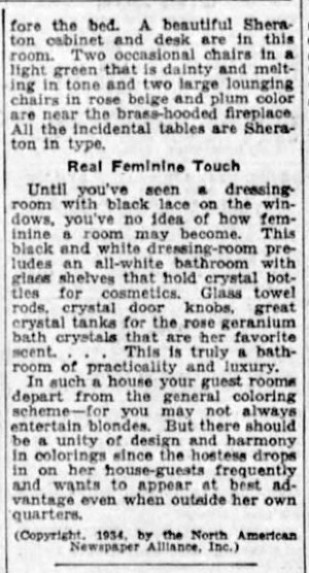 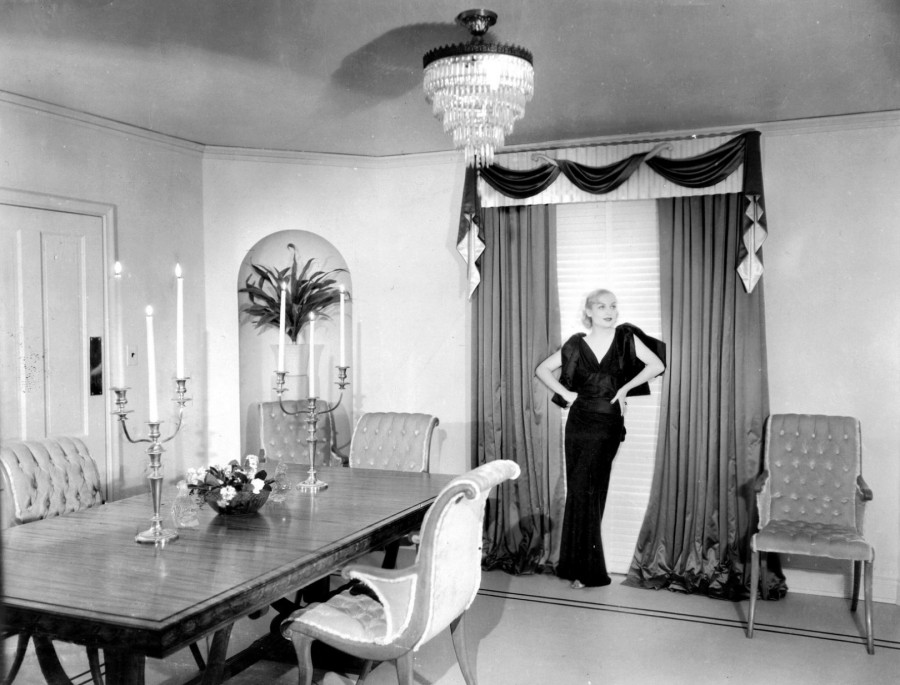 It's worth noting that William Haines, the interior decorator in question, is not identified here. Perhaps at this time he was still perceived as an actor, and author Mollie Merrick didn't want to discuss why Haines no longer was in acting (hint: it had something to do with his rather open homosexuality).

Meanwhile, Carole was working on "Twentieth Century" with the esteemed John Barrymore at Columbia, and no longer was intimidated by his status, as her self-confidence was growing. Proof can be found in this blurb from the March 2 Ogden (Utah) Standard-Examiner: 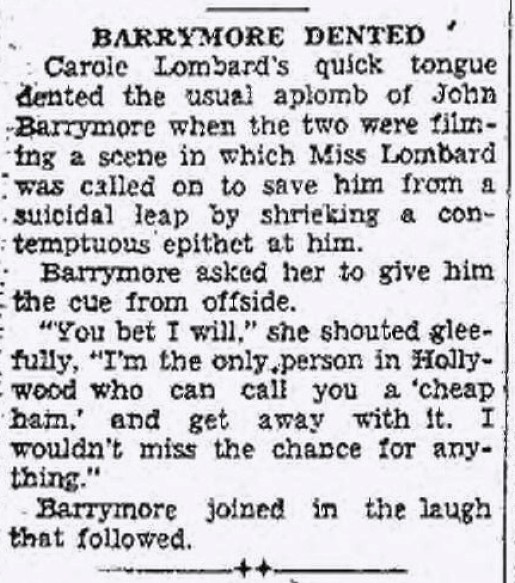 A different Lombard was developing, one no longer hemmed in by conventions of being an "actress." Some of that still could be seen in her latest film, "Bolero"... 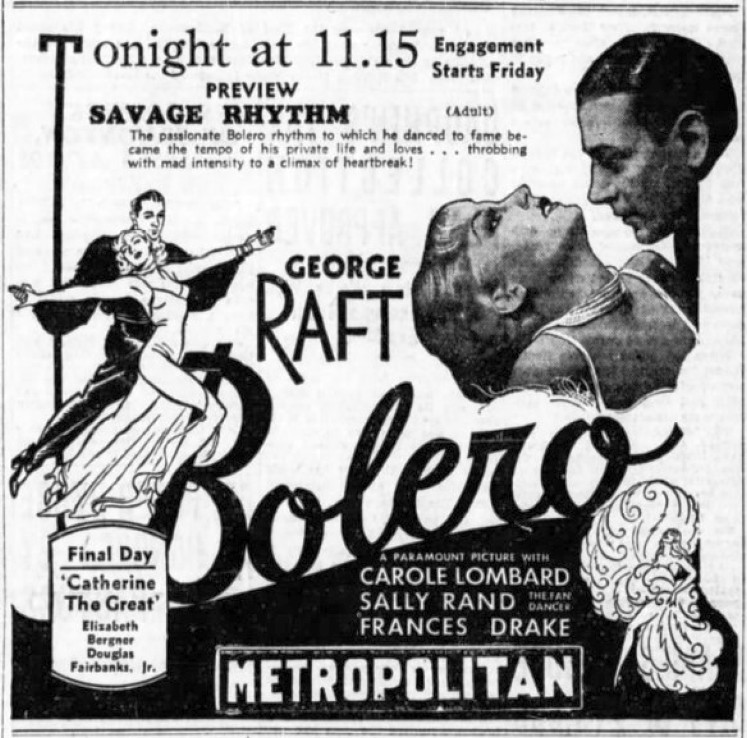 ...and in a review of it that ran March 8 in, of all places, a small newspaper in north-central Iowa, the Algona-based Kossuth County Advance: 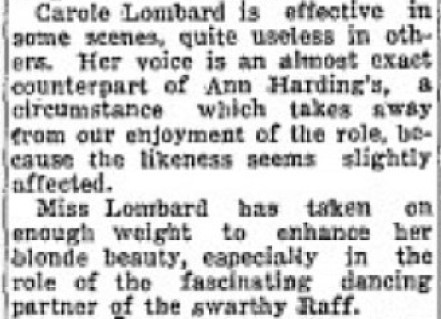 "Effective in some scenes, quite useless in others" -- certainly not taken verbatim from a Paramount press release! (If it was, it certainly wouldn't misspell George Raft's last name as "Raff" multiple times.) Aside from large metropolitan dailies, few papers at the time bothered to post original movie reviews, either out of lack of time (or laziness) or a reluctance to upset theater owners or studios and risk losing advertising.

The same day that review ran, a syndicated column appearing in the Sandusky Register in Ohio pulled the curtain behind a major cinematic secret...dubbing singing voices: 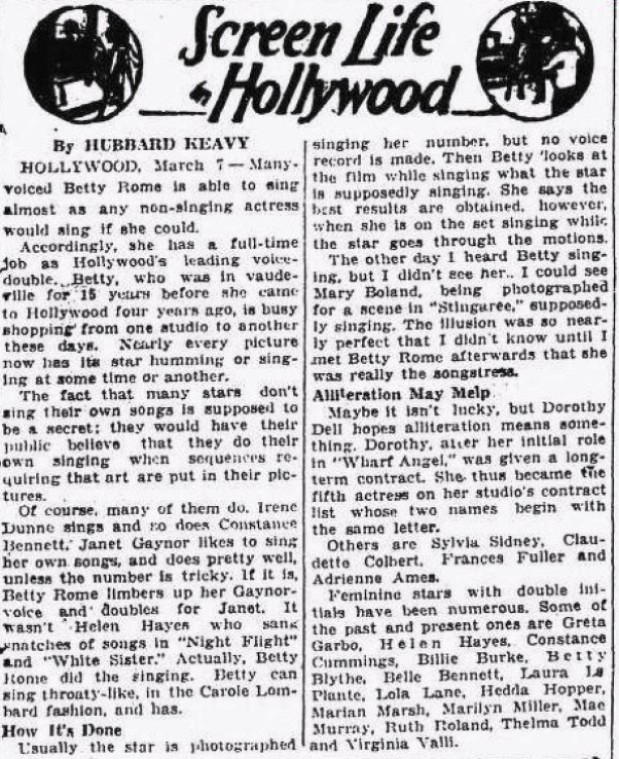 "Betty [Rome] can sing throaty-like, in the Carole Lombard fashion, and has." But does this mean she sang for Lombard?

Newspapers tended to run press releases from studios to fill up space. On March 25, the Sandusky paper ran these five briefs, all from Paramount, without noting that fact: 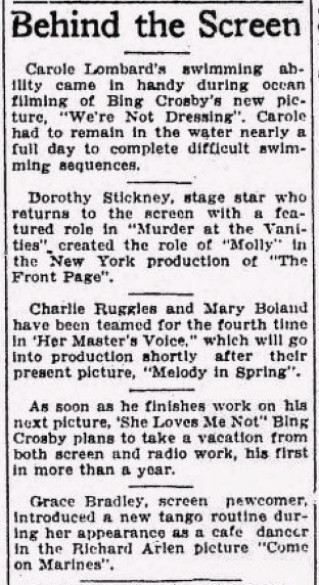 Much of Carole's popularity was due to her physical attributes. We're all familiar with the Lombard legs and face, but what about...her shoulders? Illustrator Willy Pogany praised them in a piece from Hearst's International News Service and run on the March 30 Indiana (Pa.) Gazette:

Little did their readers realize that over the next half-decade, one of their native sons would be rubbing shoulders, so to speak, with Lombard and several other stars listed. That native son was James Stewart, of course.

Carole reportedly played some basketball in her youth, and while she wasn't prepared to suit up again, she was among the stars who helped purchase uniforms for the (presumably all-male) Paramount studio team. We learned this from the March 28 Ottawa Journal in the Canadian capital: 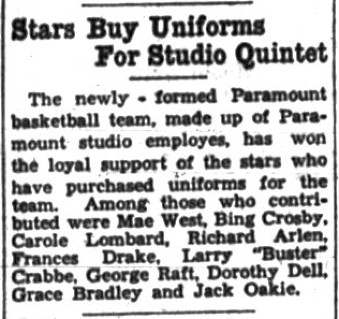 Finally, the post-divorce dating relationship between Lombard and her ex, William Powell, now was well known -- to the point where it became the element of jokes, such as this one from the March 31 Harrisburg (Pa.) Telegraph:

Incidentally, I should note I've found another source to use for vintage Lombard news. In addition to the Newspaper Archive (http://newspaperarchive.com), I'm now using http://www.newspapers.com, which has a slightly different array of newspapers, including the famed Brooklyn Daily Eagle where my grandfather once worked (and no, he was not a film critic). Both services have subscription fees.
Collapse