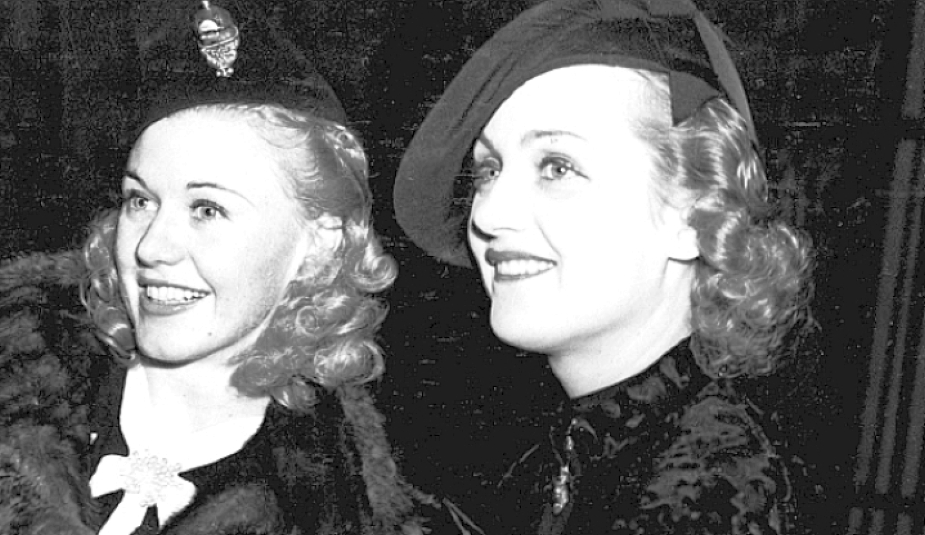 We're in Hollywood heaven, where Ginger Rogers is paying a visit to good friend Carole Lombard.

Carole: Glad you came through when I asked you to come over, but where the heck is Irene Dunne?
Ginger: Irene had to back out...she's rehearsing for an upcoming recital.
Carole: (peeved) Recital? Recital? Jeez, how prissy. No wonder Orson Welles can't stand her.
Ginger: (smiles) So what'd you want us over here for?
Carole: For this, something you two old queens -- and no, that's not a sexual reference --
Ginger: But one referring to our status as former champions of the Favorite Classic Movie Actress Tourney, as you are the current champ now.
Carole: Yes, Miss Rogers, you're incredibly perceptive.
Ginger: Whew!
Carole: Anyway, here's something you both might appreciate. (She pulls down a canvas from a wall.) Behold... 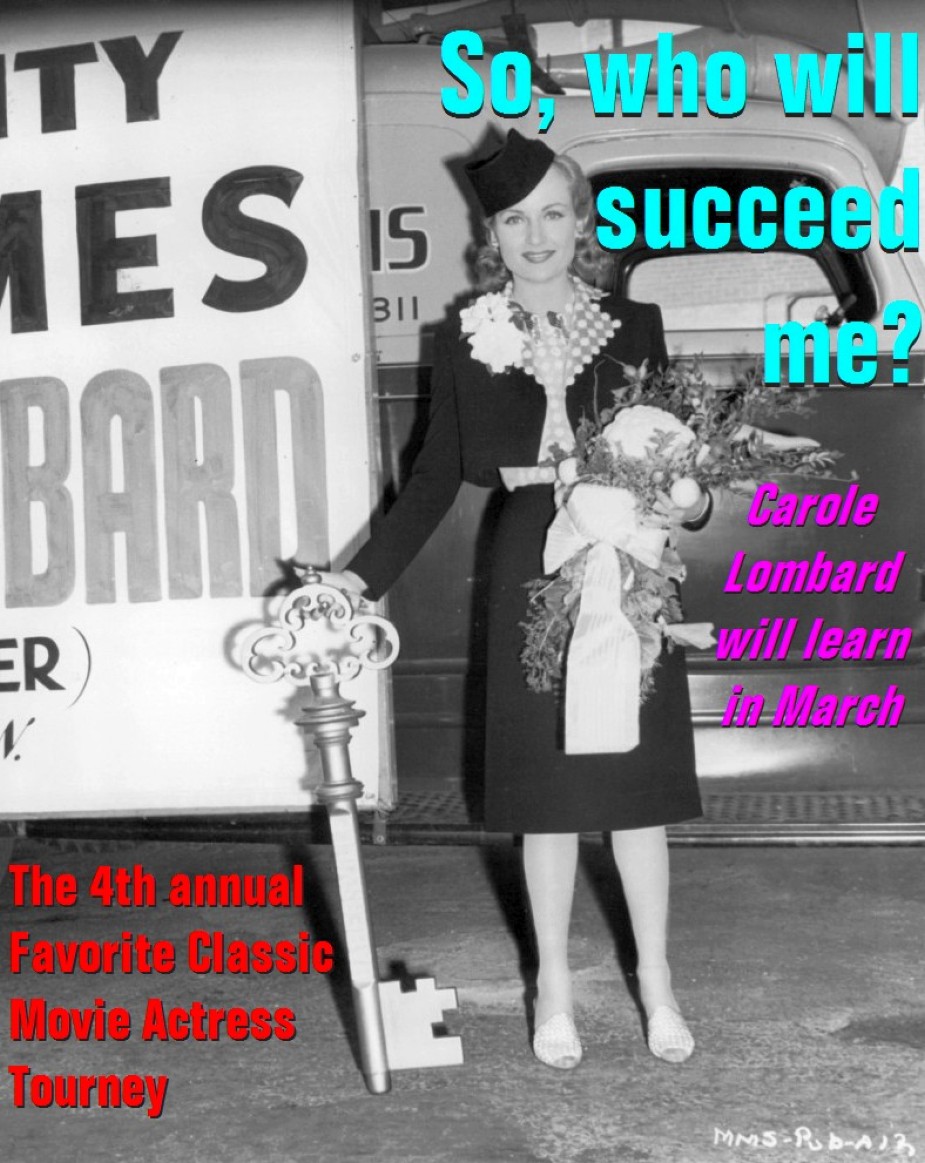 ...my last Favorite Classic Movie Actress Tourney banner. You, me and Irene, having won the past three tourneys, are out of the running this time around. It really doesn't bother me -- winning once is enough, let others grab the glory -- but my campaign manager is crestfallen. So he made that banner as a parting gift for old times' sake.
Ginger: He was your secret weapon, coming up with all sorts of imaginative banners. (Lombard nods and smiles.)
Carole: Remember the banner where he used camera trickery to turn me into a giant? 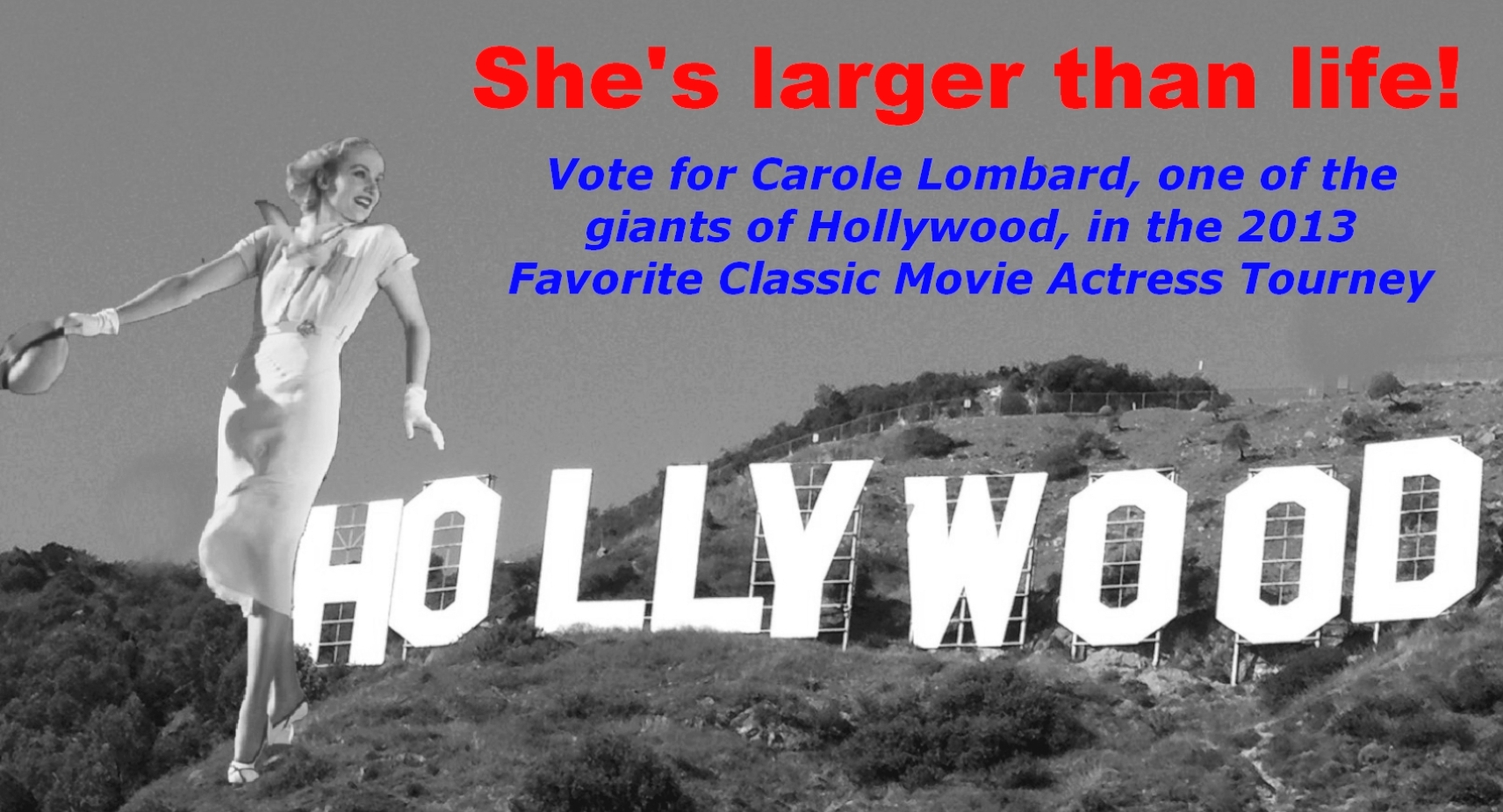 Ginger: Lombardzilla!
Carole: There are some directors whom I wish I could have pulled from their bedroom, a la King Kong, and laid down the law to! Which reminds me -- is Fay Wray in this year's event? Wonderful lady, much, much more than a "scream queen."
Ginger: I have all the brackets...let me check. (Pulls an envelope from her handbag, then opens and peruses it.) Good news for Fay -- she is. (Rogers hands Lombard a sheet with the pairings for the 1930s bracket.) 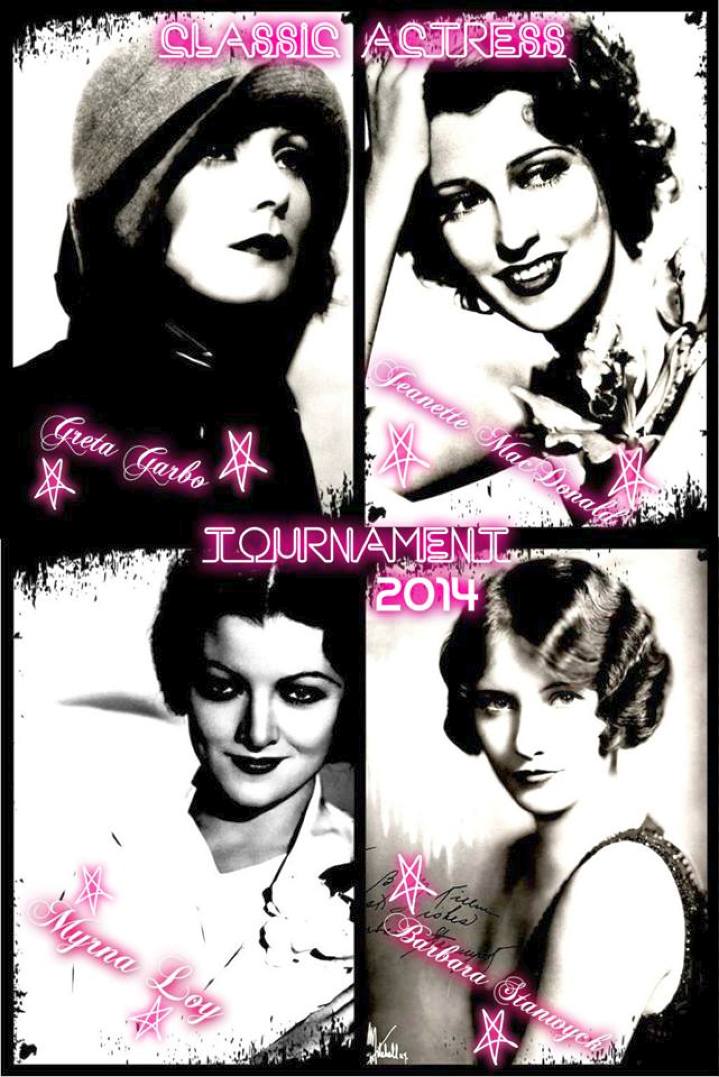 Carole: Some fascinating first-round pairings. Kay vs. Miriam -- that's indeed going to be trouble in paradise! Perhaps Herbert Marshall should cast the tie-breaking vote. And Harlow vs. Merkel...could the "bombshell" fall prey to her best friend?
Ginger: This year, the '30s bracket is being handled by Roz Russell: Dazzling Star (http://www.rozrussell.com/), which did the '40s bracket last year.
Carole: (mildly surprised) So who's running the '40s this time around?
Ginger: Journeys In Classic Film, aka the Veronica Lake site (http://journeysinclassicfilm.com/).
Carole: And what are the pairings for that one?
Ginger: I knew you were going to ask. (She hands Lombard another sheet of paper.) The seedings weren't listed here, unfortunately.
__________________________________________

Carole: Oh, sister, that De Havilland-Fontaine match will be a war...same thing for Bette vs. Kate. Will all of them use Oscars as weapons?
Ginger: I would hope not -- those things are heavy. I'm telling you because, unlike me, you've obviously never handled one, at least not one that belonged to you. (Gives Lombard a smirk.)
Carole: (seething) Curse you, Luise Rainer! (Pauses.) Nah, I was only kidding. That "Pint-Sized Cuties" division is a weird mix...Margaret O'Brien and Teresa Wright? Peggy Ann Garner and Joan Leslie? And what are Shirley Temple and Jane Withers doing in the '40s? (Rogers shrugs.)
Ginger: It's off to the '50s we go, this year coordinated by A Mythical Monkey Writes About The Movies (http://mythicalmonkey.blogspot.com/). The pairings are here. (Lombard reaches for a third sheet from Rogers.)

I don't expect you to be that familiar with the '50s, Carole, but--
Carole: I keep up. TCM, Fox Movie Channel, that huge DVD collection we have up here. Last night, Joan Blondell treated me to a showing of "Convention City," and now I have to return the favor by showing her "Marriage In Transit." Oh boy. Clark always speaks well of Grace and Sophia -- Doris and Marilyn, too. And perhaps I could've been a good Hitchcock blonde, non-comedy division, but it would've been tough to top Eva Marie Saint.
Ginger: We end things with the swingin' sixties...
Carole: (bemused) Trying to picture myself in a minidress at age 59 or so.
Ginger: With your legs and athleticism, you could have done it. As for beating me in tennis, though...
Carole: (shakes her head) That's it -- I'm challenging you to a match, best-of-three sets! But first, I need to see those 1960s brackets.
Ginger: All Good Things (http://poohtiger-allgoodthings.blogspot.com/), which came up with the idea of the tourney, is running the '60s show this year. (She hands Lombard her final sheet.)

Carole: Not sure about this bracket, although if last year's results are indicative, it's going to be hard to beat that Dame -- Diana Rigg, I mean. Liked that TV series she was on...it answered the question, "What would Nick and Nora have been like if they were in the '60s, without the dog, and mod?" Not that anyone ever asked that question.
Ginger: Don't sell Liz Taylor short.
Carole: I don't -- I see her here every now and then, and she's a hoot.
Ginger: Here are the top seeds in each bracket: 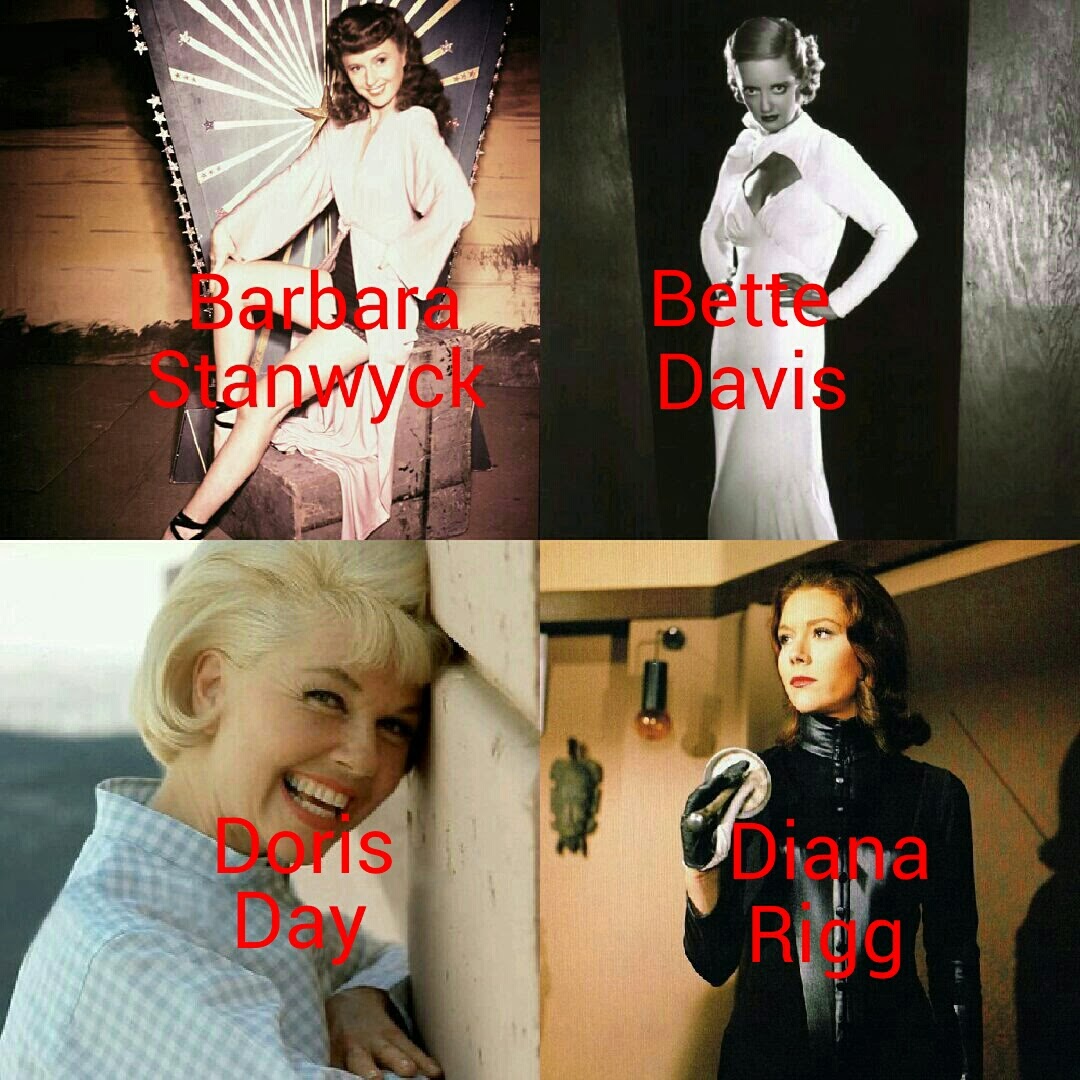 So whom do you like to take it all?
Carole: There are plenty of good candidates, but until proven otherwise, go with the '30s winner...and that could be Loy, Stanwyck, Garbo, all sorts of ladies. In fact, a few of the contenders have been seeking my support. 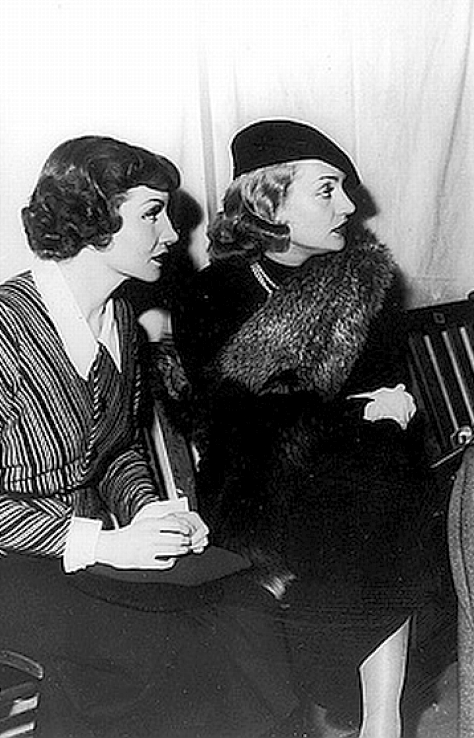 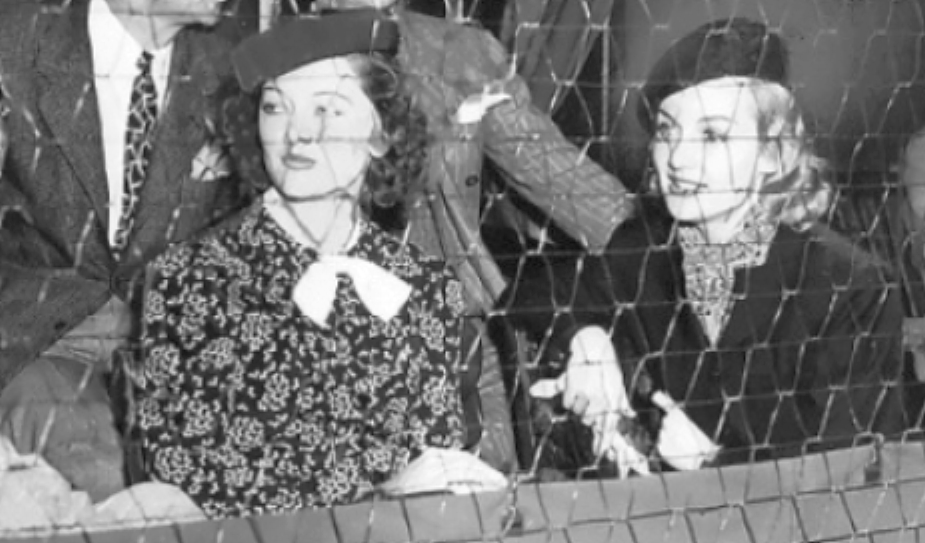 Ginger: And?
Carole: For now, I'm staying neutral. I have an awful lot of friends here, and I don't want to alienate any of them.
Ginger: Now you know how I felt last year. By the way, the first-round matches begin Sunday.
Carole: But before the tourney, that tennis match to see who's queen of the courts! (Both Lombard and Rogers snap their fingers and magically change into tennis whites, each with racquet in hand. They race to the nearest court.)
Collapse