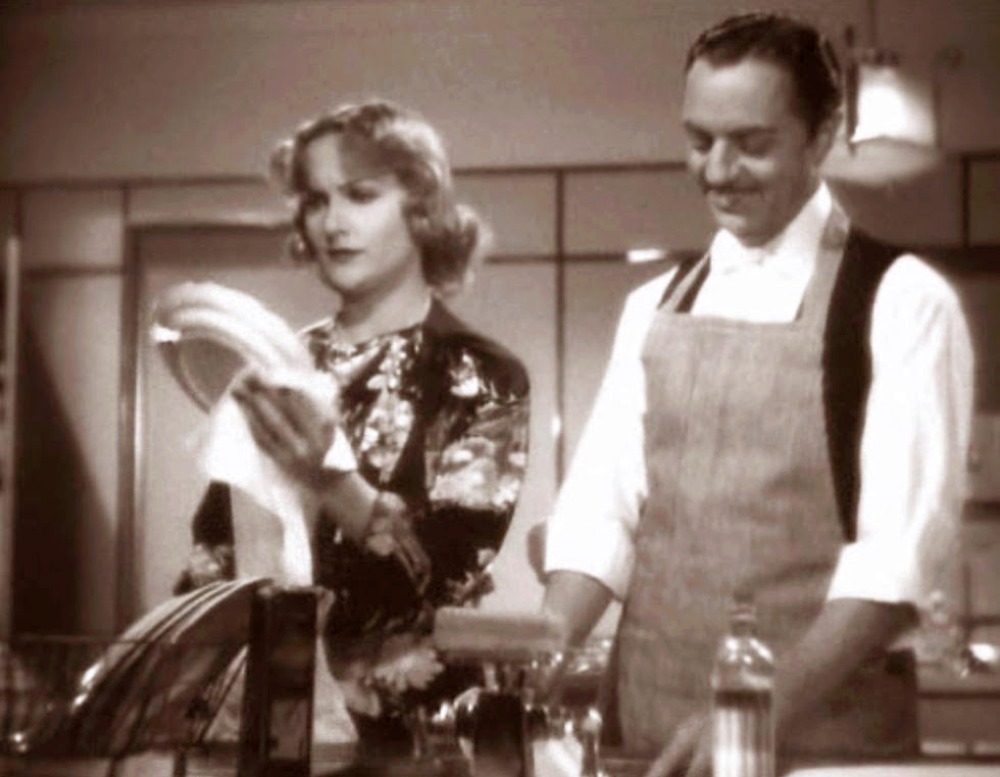 The closest Carole Lombard ever came to claiming an Academy Award occurred in 1936, when she was nominated for best actress; co-star William Powell was nominated for the second time in three years, but failed to win (which he also failed to do in 1947 for "Life With Father." The same fate befell Mischa Auer and Alice Brady in the new category of supporting roles, although Brady would capture the supporting actress Oscar a year later for "In Old Chicago."

Tomorrow, Turner Classic Movies begins its annual Academy Award extravaganza, "31 Days Of Oscar." As I've stated here before, many TCM addicts have surprisingly little love for this promotion -- not because they may or may not like the movies offered (all of them either won or were nominated for Oscars), but most are films they've seen before. It's as if your favorite free-form FM station (kiddies, if your parents went to college from the '60s through the '80s, they can tell you all about this) suddenly switched to playing nothing but the likes of "(I Can't Get No) Satisfaction" or "Respect" for a month. (This February, I might waive that disdain if such a station played plenty of Beatles tracks to commemorate the 50th anniversary of the British invasion they spearheaded.)

But give TCM credit for realizing every year, it has to find a new way to put lipstick on this proverbial pig. Last year's theme was settings for films, everything from Los Angeles and New York to outer space and prehistoric times. This year, it's kicking off the event with a prime-time original documentary, airing at 8 p.m. (Eastern) Saturday... 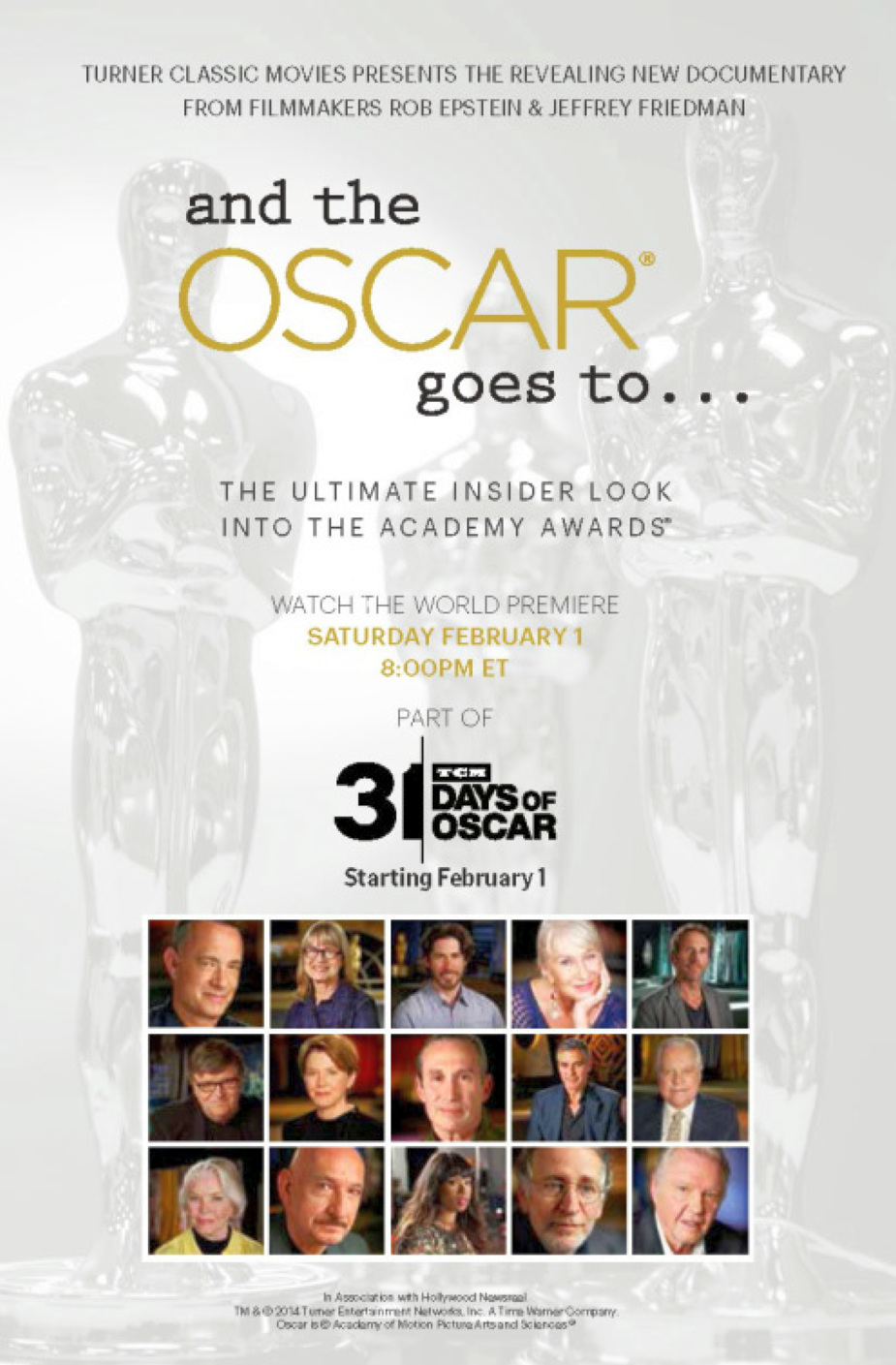 It's a joint effort between TCM and the Academy of Motion Picture Arts and Sciences, which might cause some trepidation among a few of you. But according to a review from the Associated Press, there's relatively little cause to worry; every time "And The Oscar Goes To..." threatens to become too reverent, something comes along to knock the Academy down a peg, such as the 24-year gap between wins for black actors (Hattie MacDaniel for "Gone With The Wind" in 1939 to Sidney Poitier for "Lilies Of The Field" in 1963). Or the Academy's initial stand against the growth of industry unions such as the Writers Guild of America or Screen Actors Guild. Jeffrey Friedman and Robert Epstein, both Academy members, co-directed the film and had final cut; here are Epstein (left) and Friedman at the Jan. 23 premiere screening in a still provided by AMPAS: 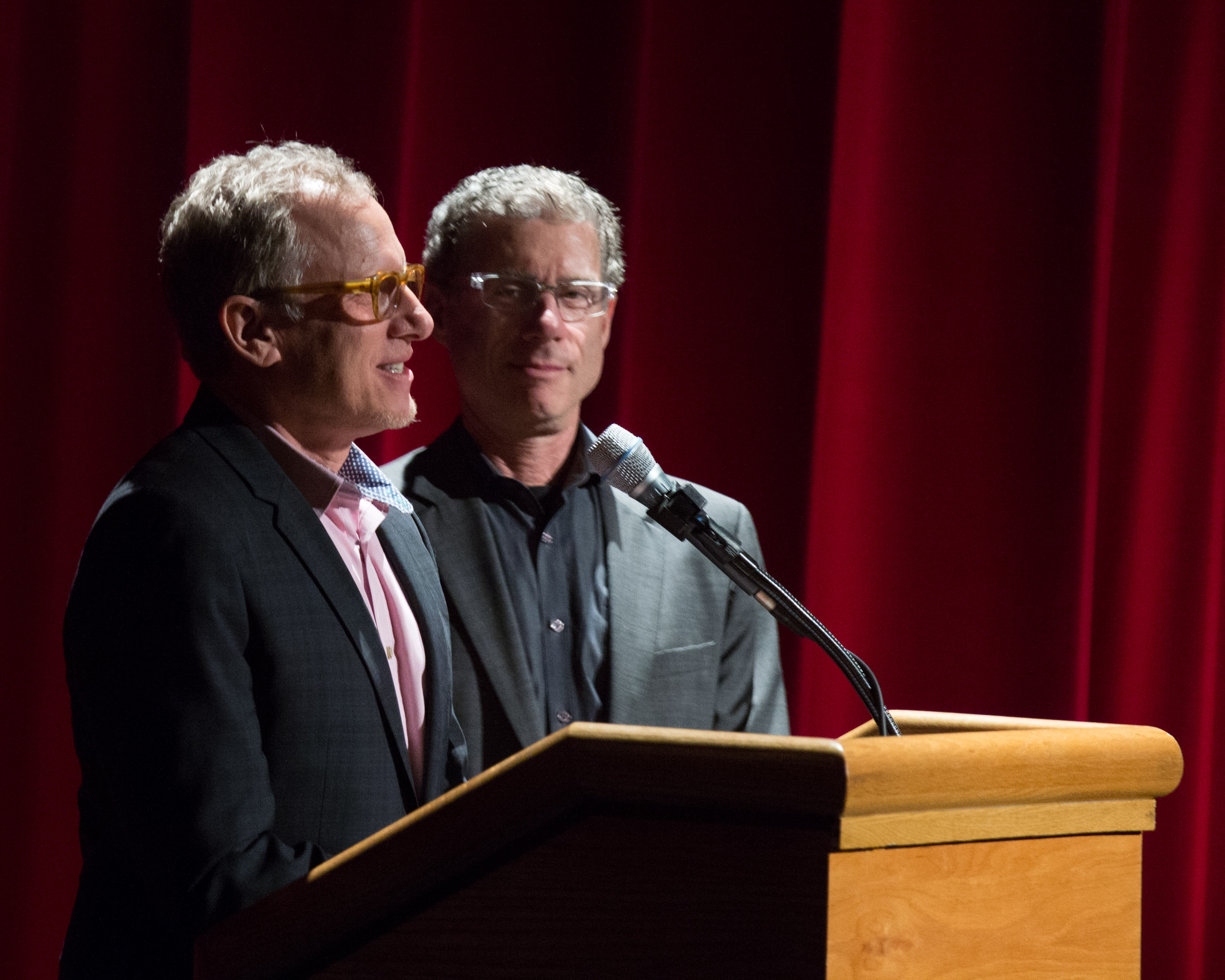 TCM host Ben Mankiewicz was there as well: 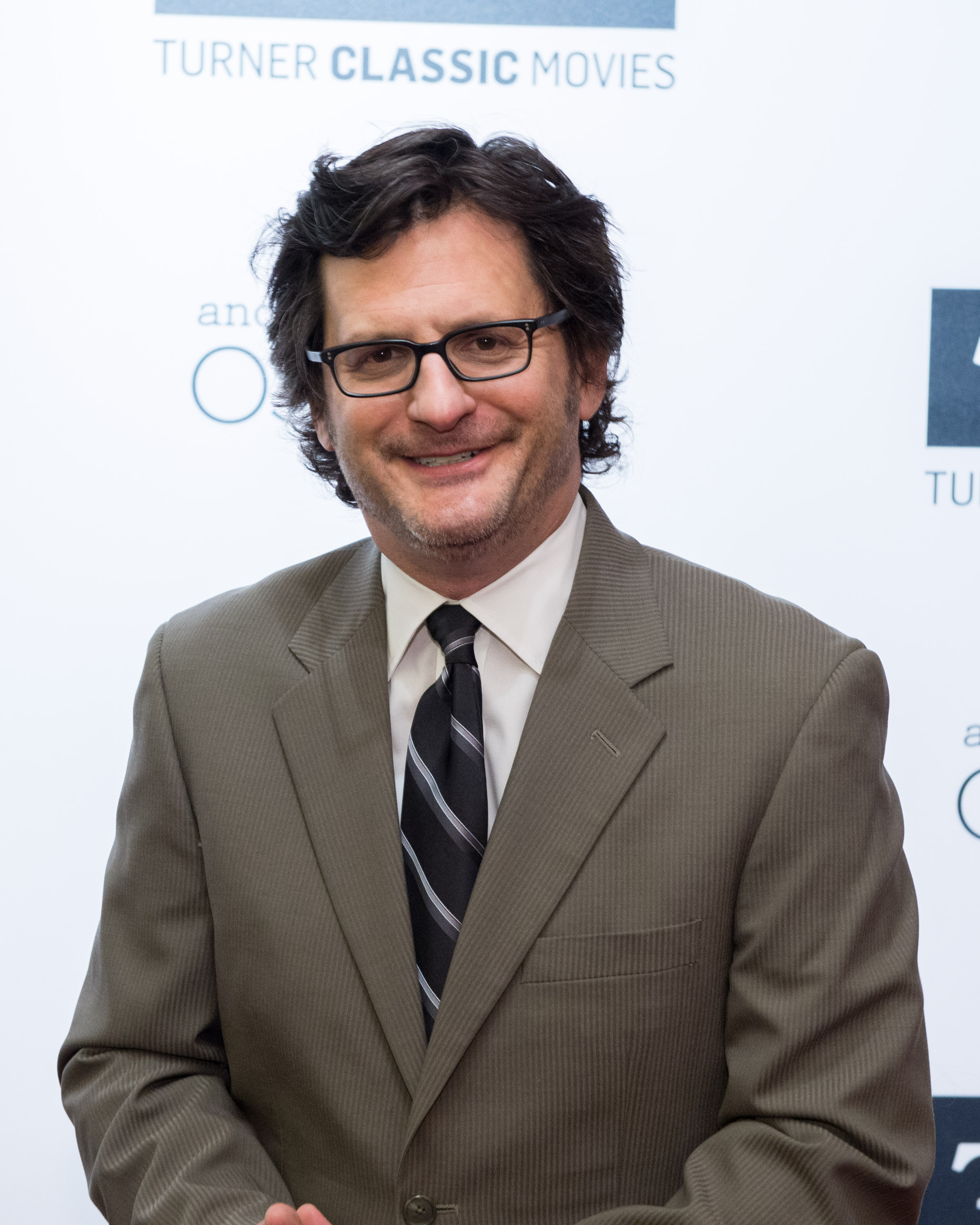 My friend Lara Gabrielle Fowler, who runs the fine blog "Backlots," came down from the Bay Area to attend the screening (http://backlots.net/2014/01/25/and-the-oscar-goes-to-a-premiere-screening-at-the-academy-of-motion-picture-arts-and-sciences/), as were quite a few other classic film bloggers. Fowler wrote:

"I was pleasantly surprised to see that the film is quite unbiased in its attitude toward the Oscars. Instead of the Academy flouting what it does as somehow the be-all, end-all in Hollywood, it highlights several people who emphasize the idea that the Oscars are not really what Hollywood is all about."

She then cited this excerpt:

"My absolute favorite quote from the film came from a director who said that everyone thinks the Oscars are the real Hollywood. They are not, he said. He continued on to say that the real Hollywood is seen when the actors, directors and crew members show up on the set the day after the lavish Oscar party, wearing jeans and eating bad doughnuts and drinking stale coffee. Hollywood is not the Oscars, he emphasized. Hollywood belongs to the people who work all day and all night for the perfect shot and put their blood, sweat and tears into what they do.

"Following that quote, the entire theater burst into applause."

Nothing against classic film bloggers such as Lara -- they may have clapped, too -- but I'm guessing most of the applause at the AMPAS Samuel Goldwyn Theater in Beverly Hills that night came from people who work in the industry, people who understand being in the motion picture business goes far beyond the red carpet glamour we'll see this March 2. Movies have changed in so many ways since the 1930s, but the hard work that goes into the process is something that Lombard and many of her contemporaries appreciated: 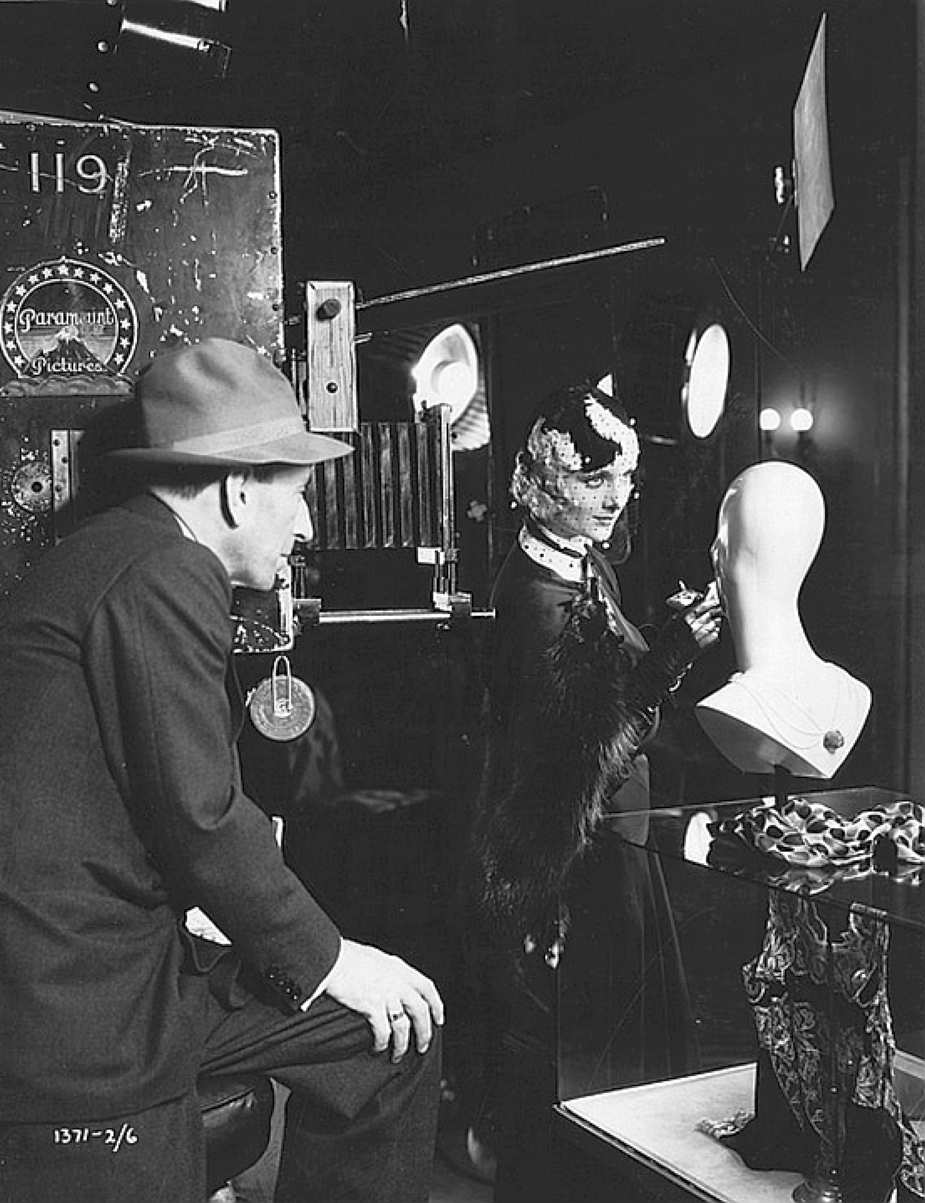 Fowler thought some of the film was a bit disjointed, and that tighter editing between the premiere and the TCM airing could improve things a bit; we'll have to wait and see.