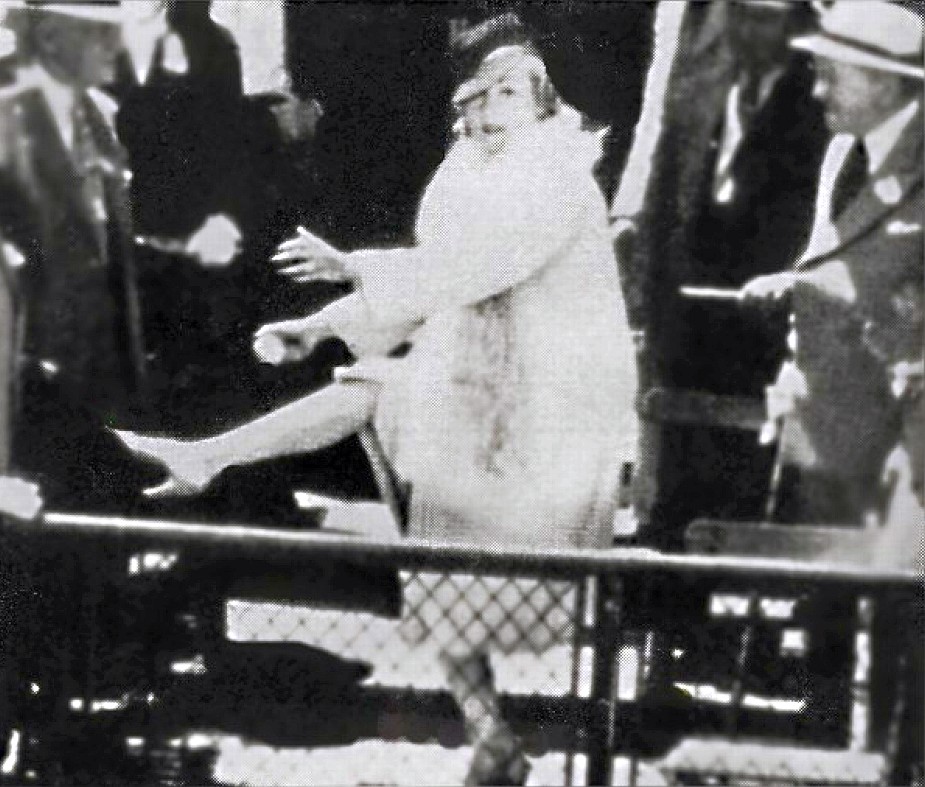 A question: If Carole Lombard were alive today, would she be a sports fan? (By "alive," I mean being around in 2014 at roughly the same age she was in her prime, in other words born sometime during the 1980s. The Lombard born in 1908 would be 105 today, and even her incredible energy probably would have waned by now. Heck, she might have forgiven 104-year-old Luise Rainer for beating her out for the best actress Oscar in 1936.)

I ask the sports fan question because it leads to another one: Did Lombard ever see a hockey game? We know she loved baseball, boxing and college football, played sandlot ball in her youth, took part in basketball, track and volleyball in school, and as an adult regularly swam and played tennis (and perhaps golf to a lesser extent). But hockey (the ice variety)? The jury is out. Some say Carole was returning from a hockey game with her beau when she was in the auto accident that led to surgery and Fox canceling her contract; others claim the event was basketball. The answer is as unclear as the precise date of the accident.

But let's assume our hypothetical, modern-day Lombard was a sports fan in her beloved Los Angeles. (In today's entertainment landscape, if this Carole were an actress, she might be on a sitcom instead of in films, given how relatively few good movie roles there are for women. But that's another topic for another time.) There's a good chance that she would be at a baseball stadium tomorrow night -- but if she were of sufficient celebrity stature today, instead of throwing out the first ball, as above, she might drop the first puck.

That's because Dodger Stadium is about to host one of the most unusual events in its 52-year history...an NHL game. As Jack Paar would have said, I kid you not. Saturday, the Los Angeles Kings will take on their arch-rivals, the Anaheim Ducks, as outdoor hockey makes its way to southern California. Center ice is roughly at the spot occupied by second base from April to September (and, if the Dodgers' mega-budget comes through, perhaps this October as well). 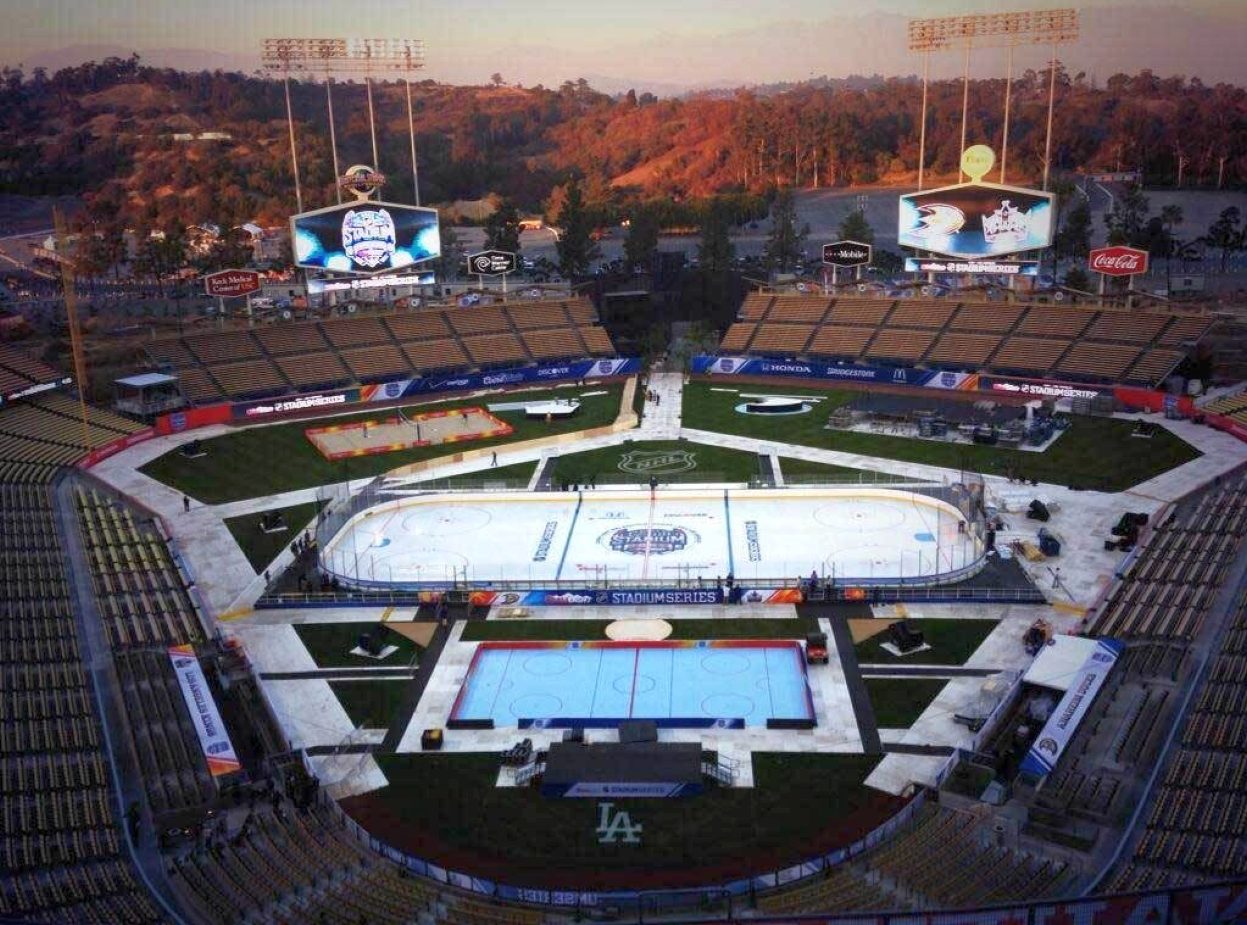 Wait, you say. Hasn't it been a very warm -- heck, hot -- January in Los Angeles? How could an endeavor such as this actually take place without it becoming an aesthetic embarrassment? The answer, of course, lies in technology.

Advanced refrigeration techniques -- not to mention an insulated, heat-reflecting Mylar blanket that covers the rink during the day -- make it possible to play hockey at Chavez Ravine...especially since the game will be played at night (opening face-off is slated for 7:15 p.m. PT), and by then the temperature in the stadium should be about 60 degrees. Not frigid for the fans, as it's roughly the same temp as most indoor NHL rinks, but cold enough to make the ice surface stand up. With help from a Zamboni between periods, of course. Here's how Dodger Stadium, hockey-style, looks at night: 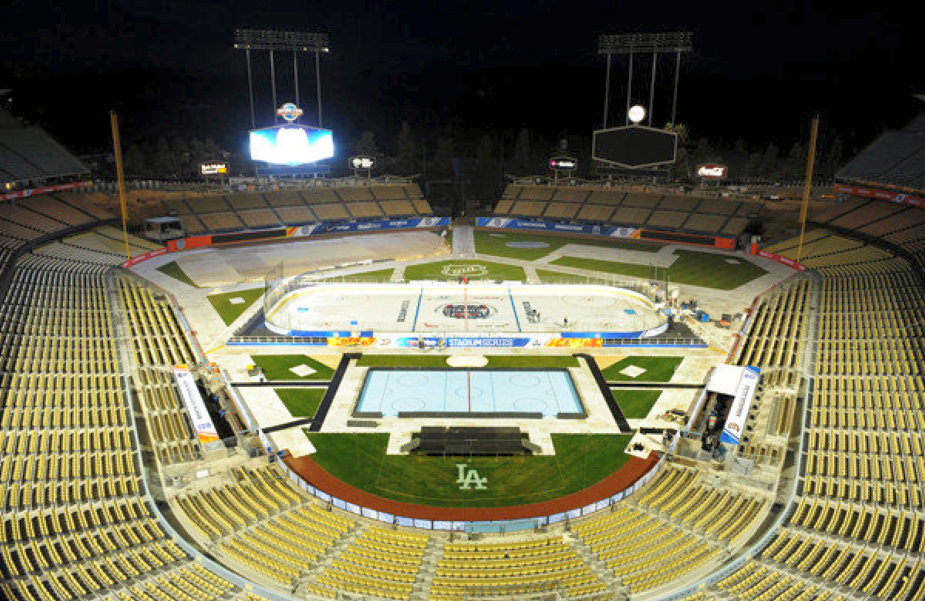 You can watch time-lapse photography of the rink installation at http://video.nhl.com/videocenter/console?catid=23&id=532452⟨=en.

Both teams will work out on the rink today, a day after the first leg of their home-and-home series at the Honda Center in Anaheim. (That game was won by the Ducks, 2-1.) It should be a good contest, not only because of the rivalry but since they are two of the NHL's stronger teams. Anaheim leads the Pacific Division, and its 81 points are most in the league. Los Angeles is third in the division and is arguably the NHL's best defensive team.

Hockey in southern California hasn't always had this high a profile. Over the years, L.A. had teams in some western minor leagues, but didn't get a taste of the NHL until the Kings were formed as part of the 1967-68 six-team expansion that doubled the league's size. And for most of their first two decades, few outside a devoted core partook of Los Angeles hockey. But that all changed in 1988. 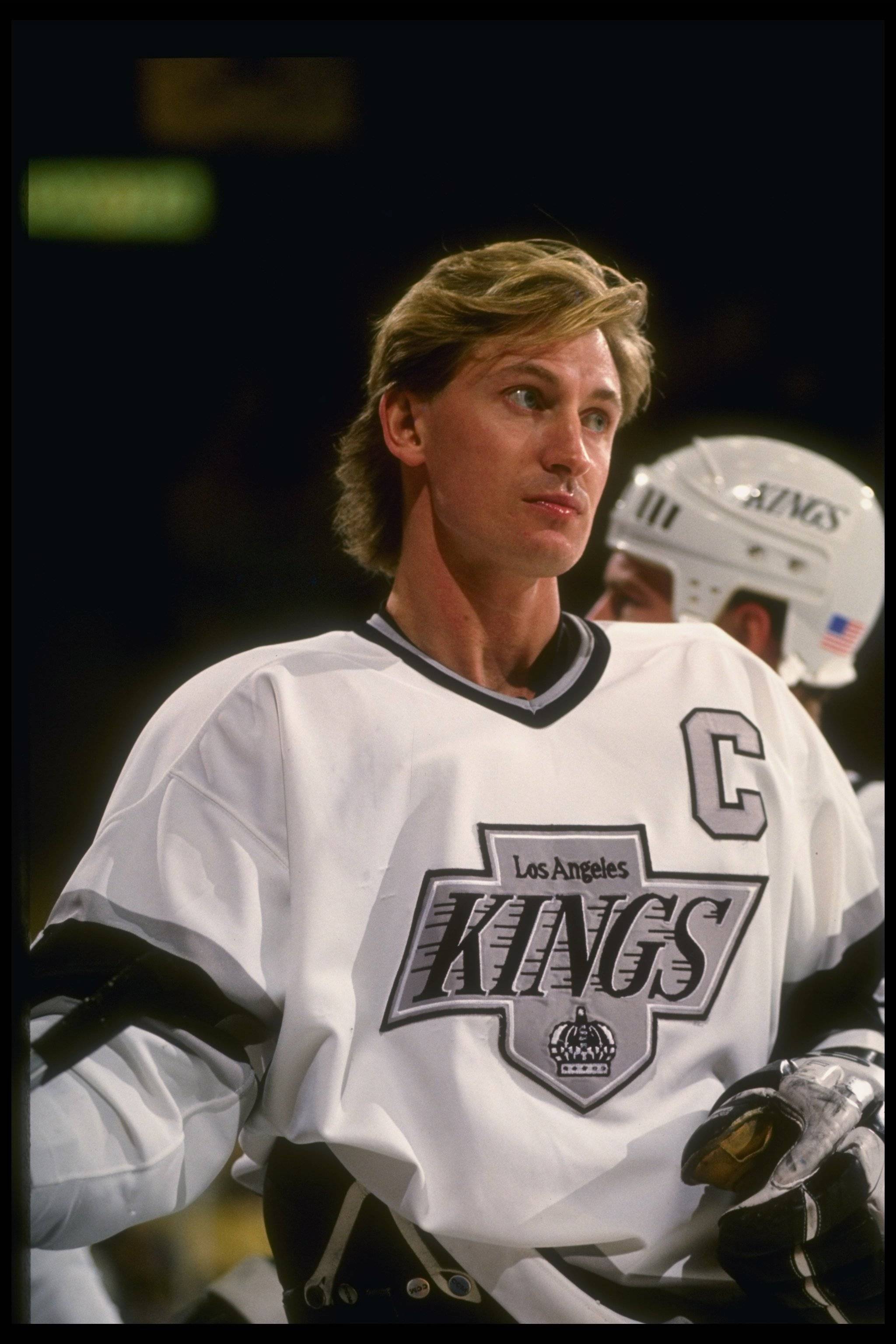 That August, the Kings acquired Wayne Gretzky from the Edmonton Oilers, whom he had led to four Stanley Cups. Suddenly, Los Angeles hockey had star power, and the area responded. While the Gretzky-era Kings never won the Cup, he made them a hot ticket...and over in Anaheim, the Walt Disney Company responded by getting an expansion franchise in the early '90s and naming them the Mighty Ducks of Anaheim, after a popular Disney hockey movie. (The "Mighty" later was dropped when the franchise was sold and de-Disneyfied.)

Both franchises gradually have built solid followings, and each has claimed pro hockey's highest honor. The Ducks won the Cup in 2007, while the Kings finally won theirs in 2012. And our latter-day Lombard probably would have remembered both local triumphs.

Saturday's game will also feature some uniquely L.A. touches, as KISS will perform and beach volleyball will be set up near the left-field bleachers. Those of you in the U.S. can see the Kings and Ducks on the NBC Sports Network at 9:30 p.m. (Eastern).

By the way, the home of the East Coast's wealthiest MLB franchise -- New York's Yankee Stadium -- is to be the site of two outdoor games within the next few days, as the New York Rangers battle each of their metropolitan rivals. On Sunday, the New Jersey Devils invade the Bronx, while on Wednesday, the latest installment of the Rangers-New York Islanders battle takes place.

Outdoor hockey continues to be popular. Next year's NHL Winter Classic will take place in Washington, probably at Nationals Park. And I'm certain my friend Carole Sampeck of The Lombard Archive would be thrilled to see her Dallas Stars play an outdoor game at the Cotton Bowl or Rangers Ballpark someday.
Collapse