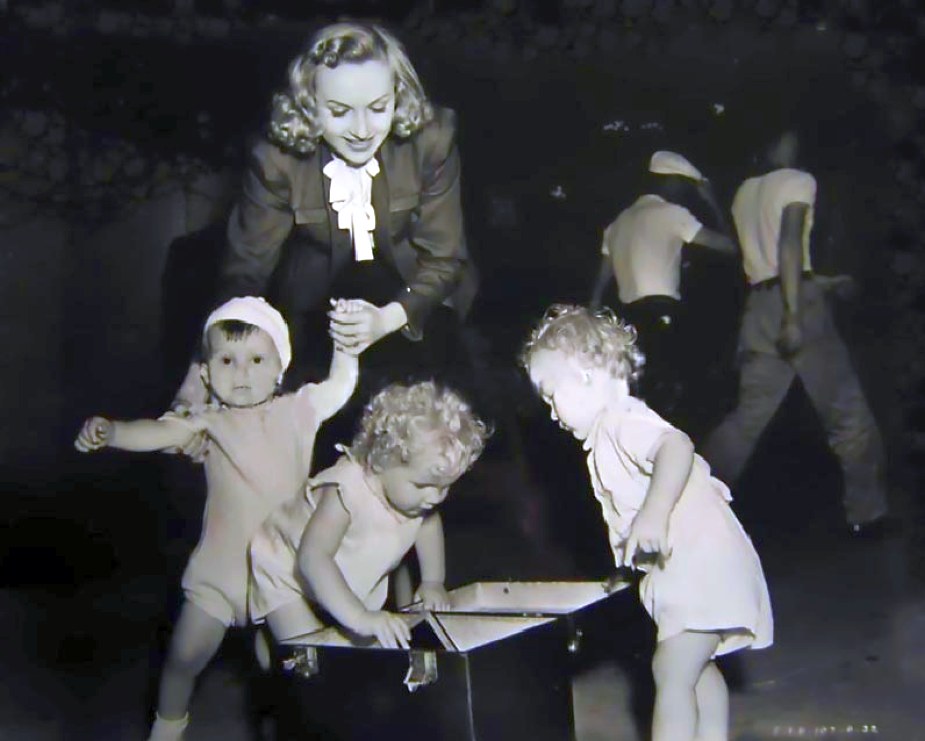 If you've never seen "Made For Each Other," don't let this photo confuse you; Carole Lombard's character does not give birth to triplets. But today, in the last of our five entries showing Carole content from Screen Guide, we visit the December 1938 issue and go behind the scenes of that Selznick International movie: 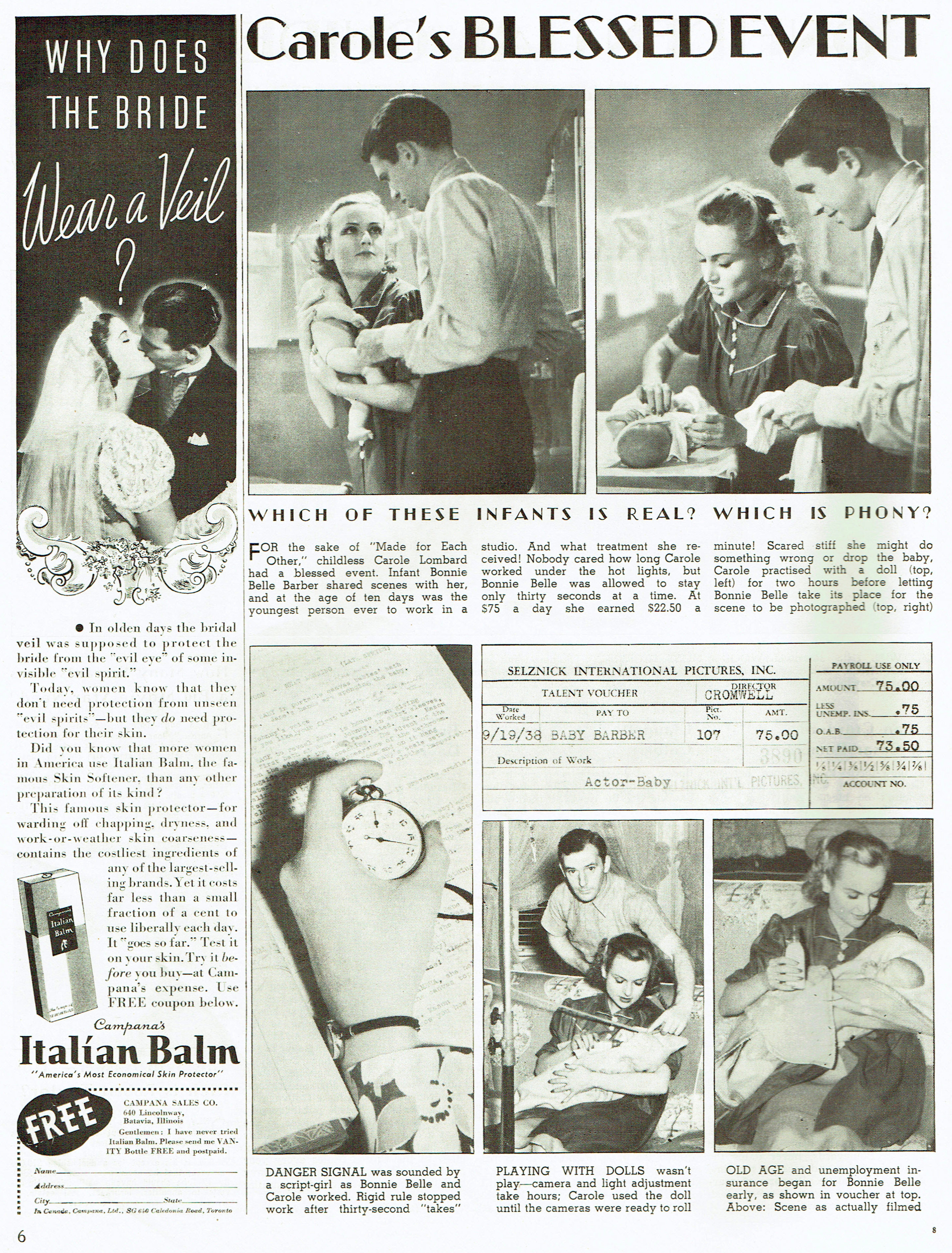 Actually, I believe the three youngsters in the top photo rotated in playing a slightly older version of the baby boy. The character as a newborn was filmed on Sept. 19, 1938 and played by 10-day-old Bonnie Belle Barber -- the youngest actor to be shot in a Hollywood studio production.

State regulations prohibited the infant from working for more than 30 seconds at a time, so a stopwatch was used to time the scenes. Lombard, careful with the infant, practiced with dolls as a precautionary measure.

The man Carole hoped to marry (and have children with), Clark Gable, was all over this issue. He was on the cover... 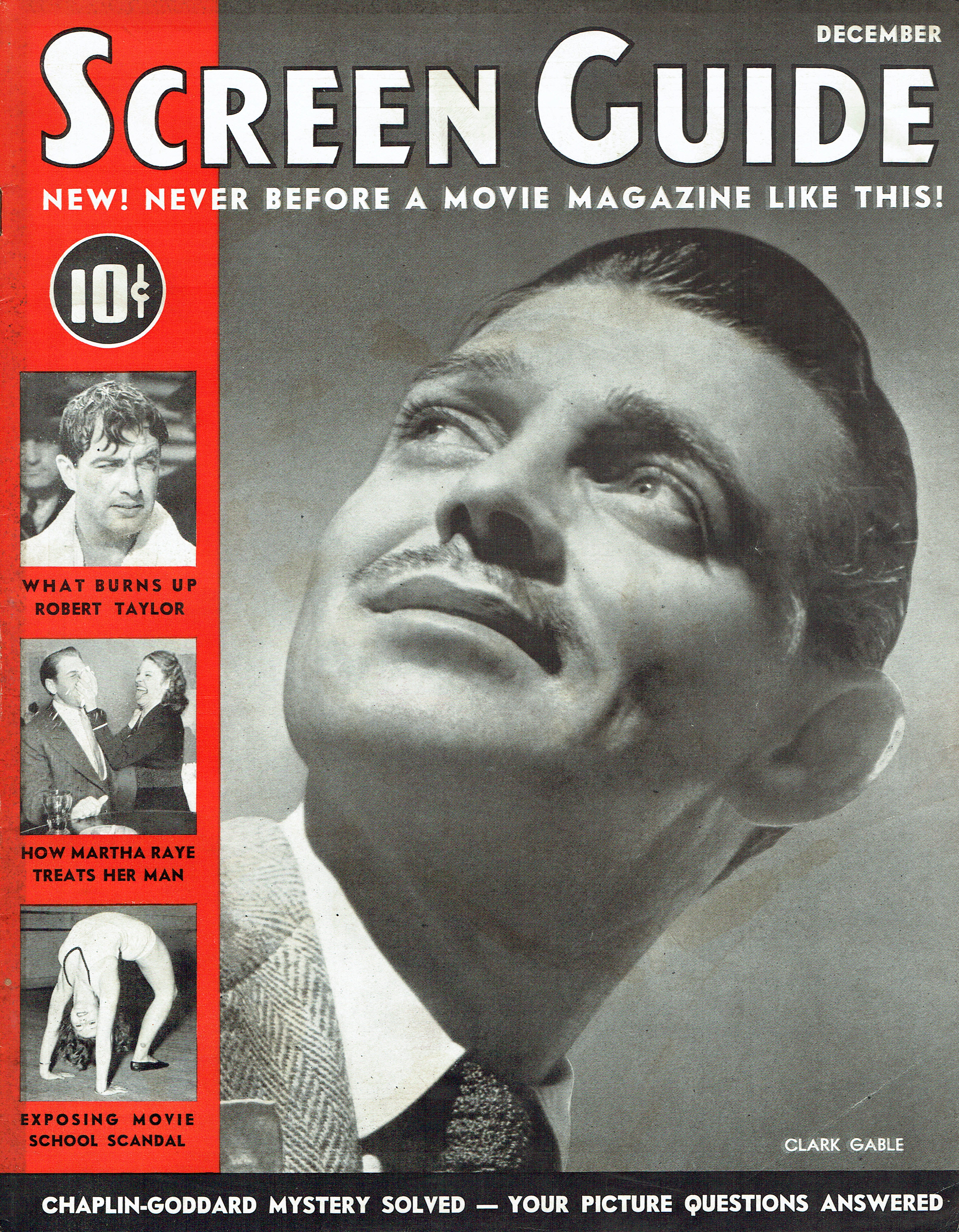 ...and his ranch in Northridge, not far from where Carole had hers (there's a map showing all the star ranches in that neck of the San Fernando Valley -- BTW, Clark, that's a handsome sheepdog), was profiled inside... 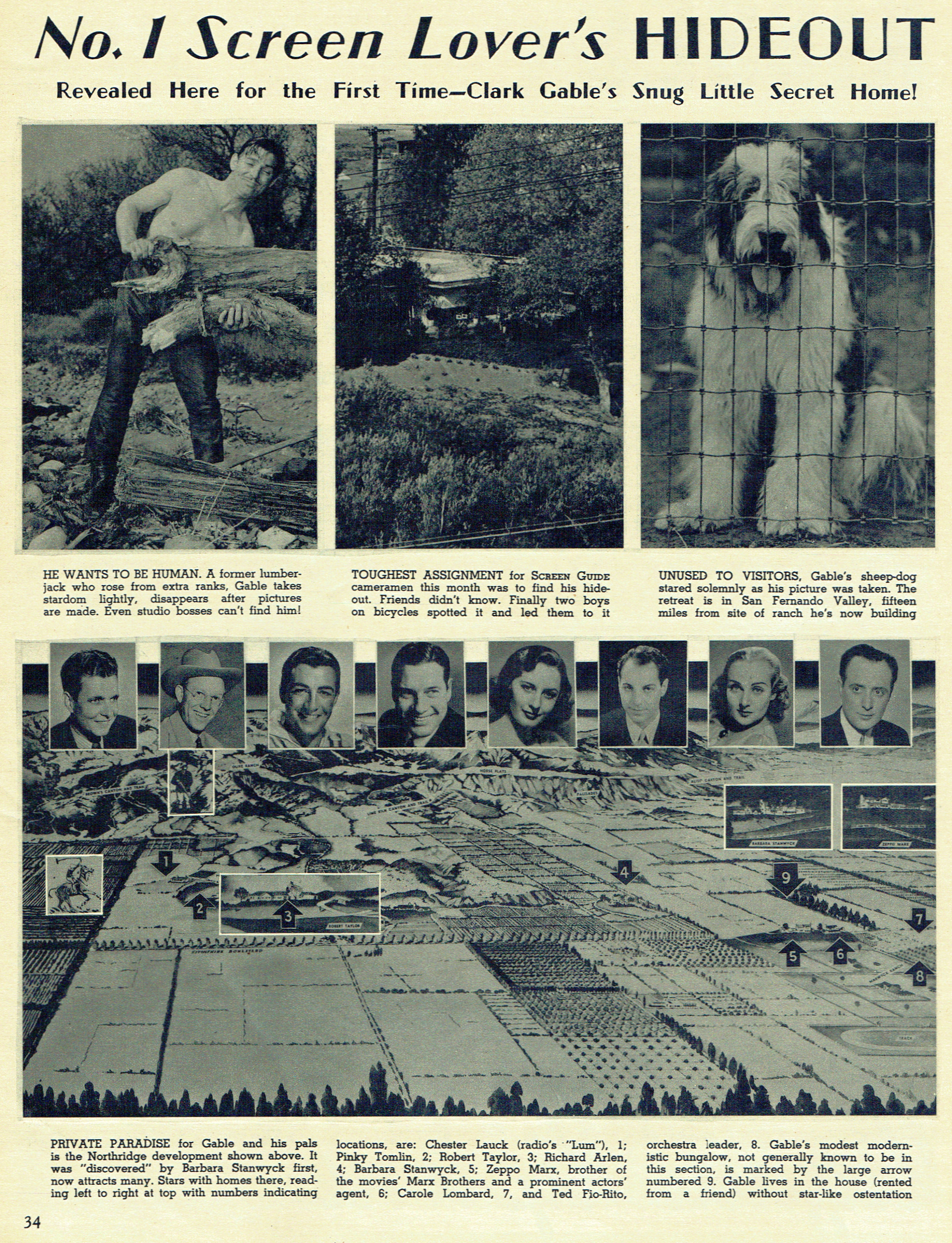 ...opposite a page of Clark's kissing technique. (And how many young women at the time kissed that Gable cover, a la Constance Bennett as a Brown Derby waitress in the opening scene of "What Price Hollywood?") 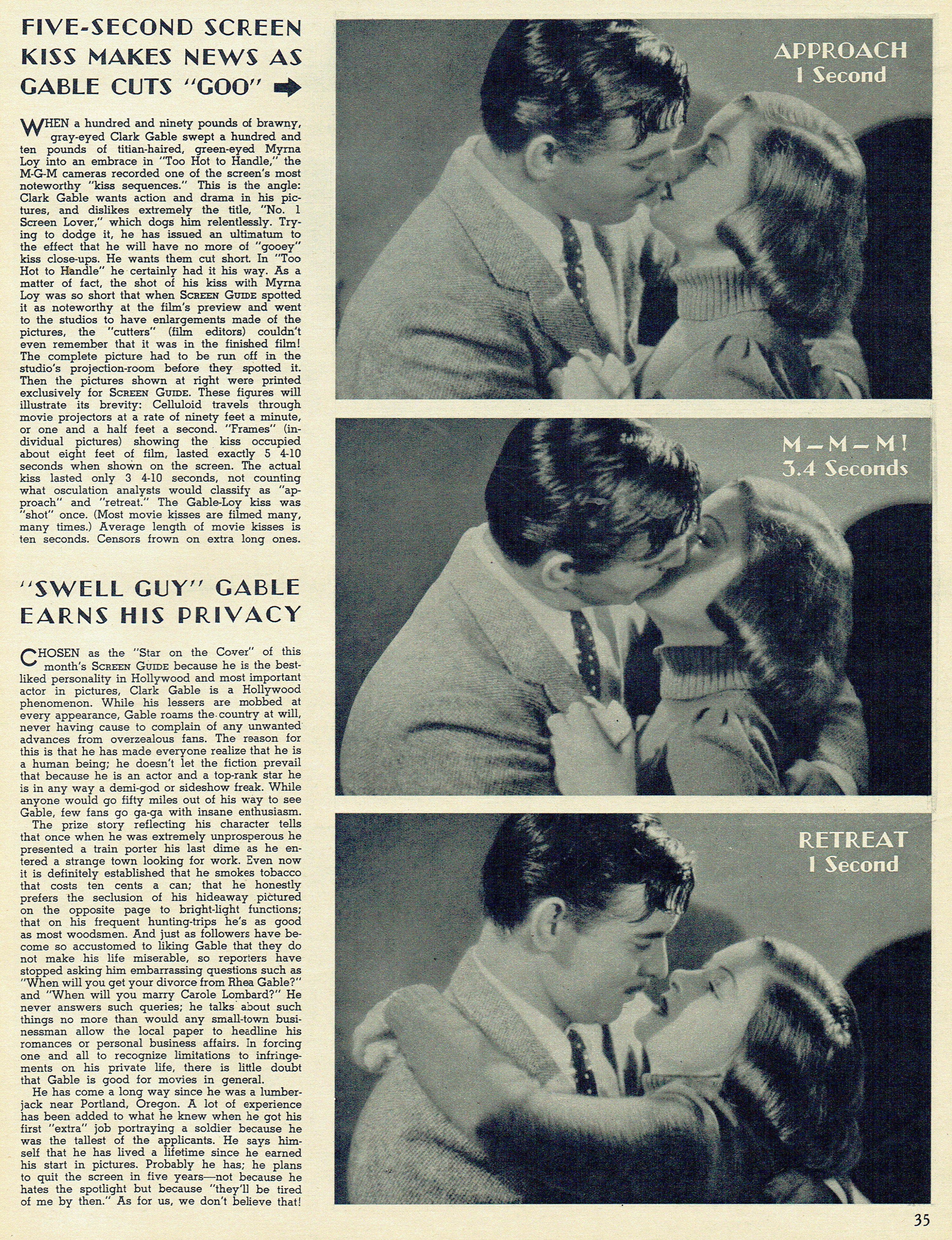 The "Confidential Guide" section also had a Gable-Lombard entry, in which they supposedly had gone dove hunting in Bakersfield: 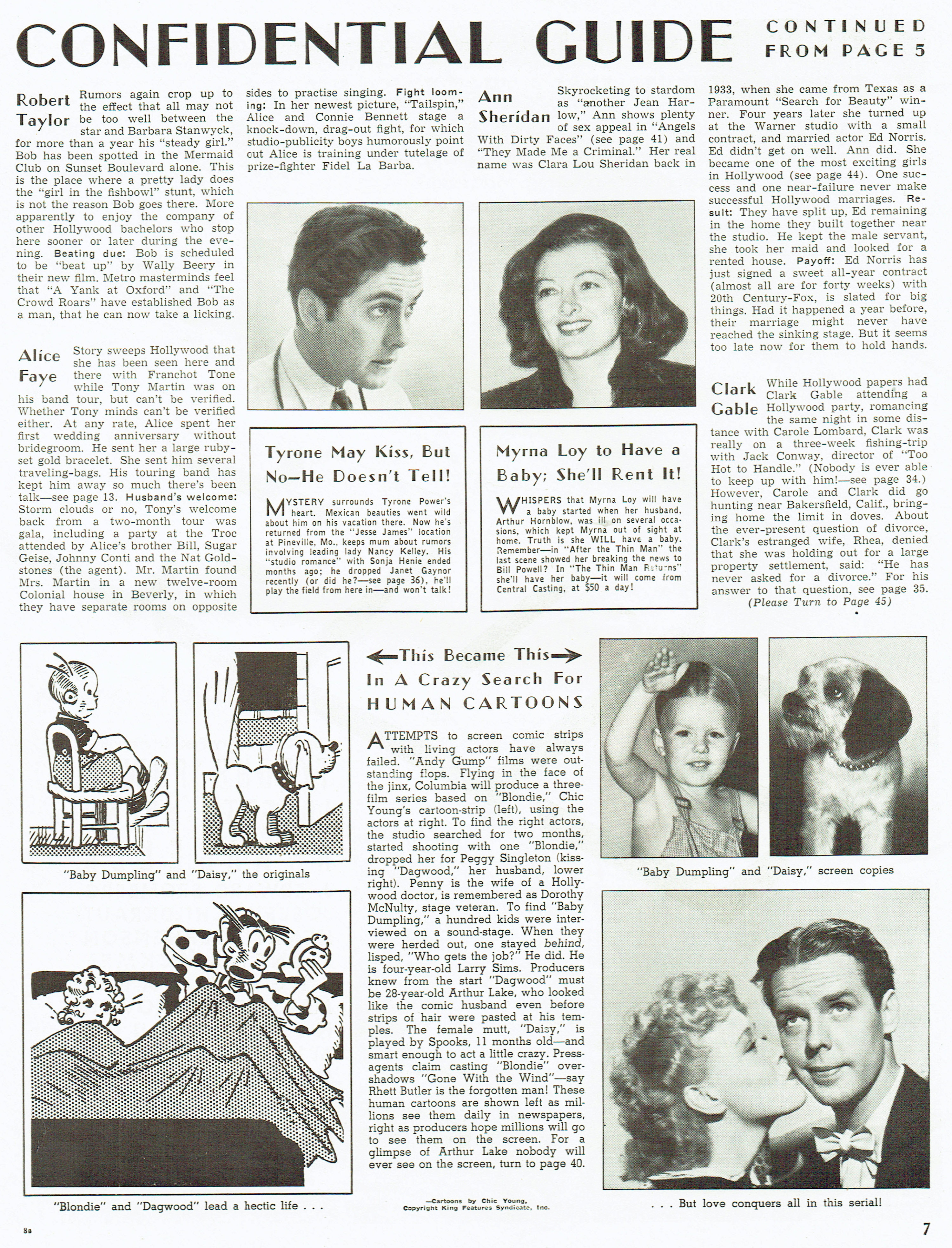 Here's the rest of the "Continental Guide." Note the middle page, where a bit of the real world intrudes on the dream factory -- specifically, a copy of an anti-Semitic flyer that had been distributed around the Hollywood area: 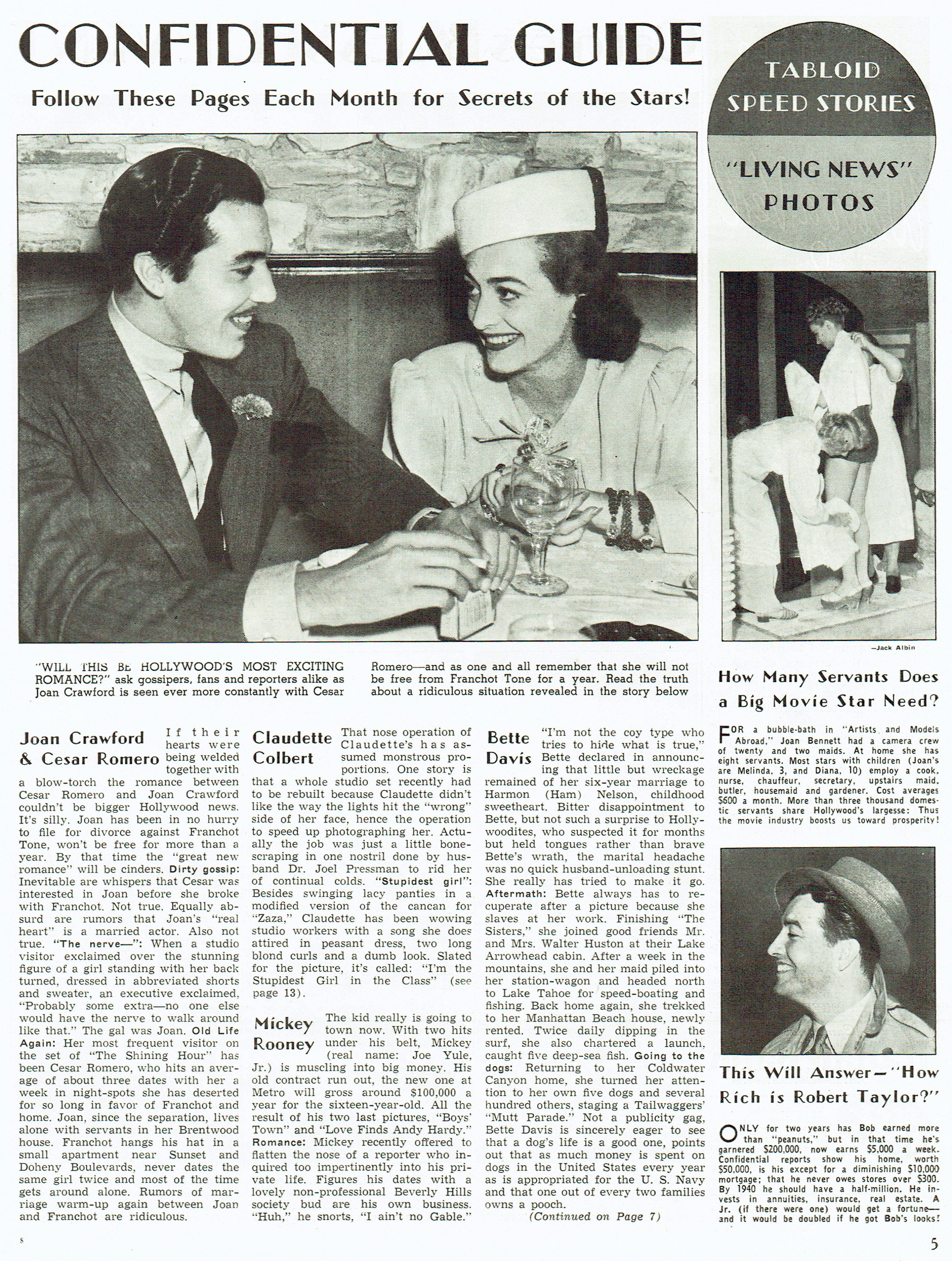 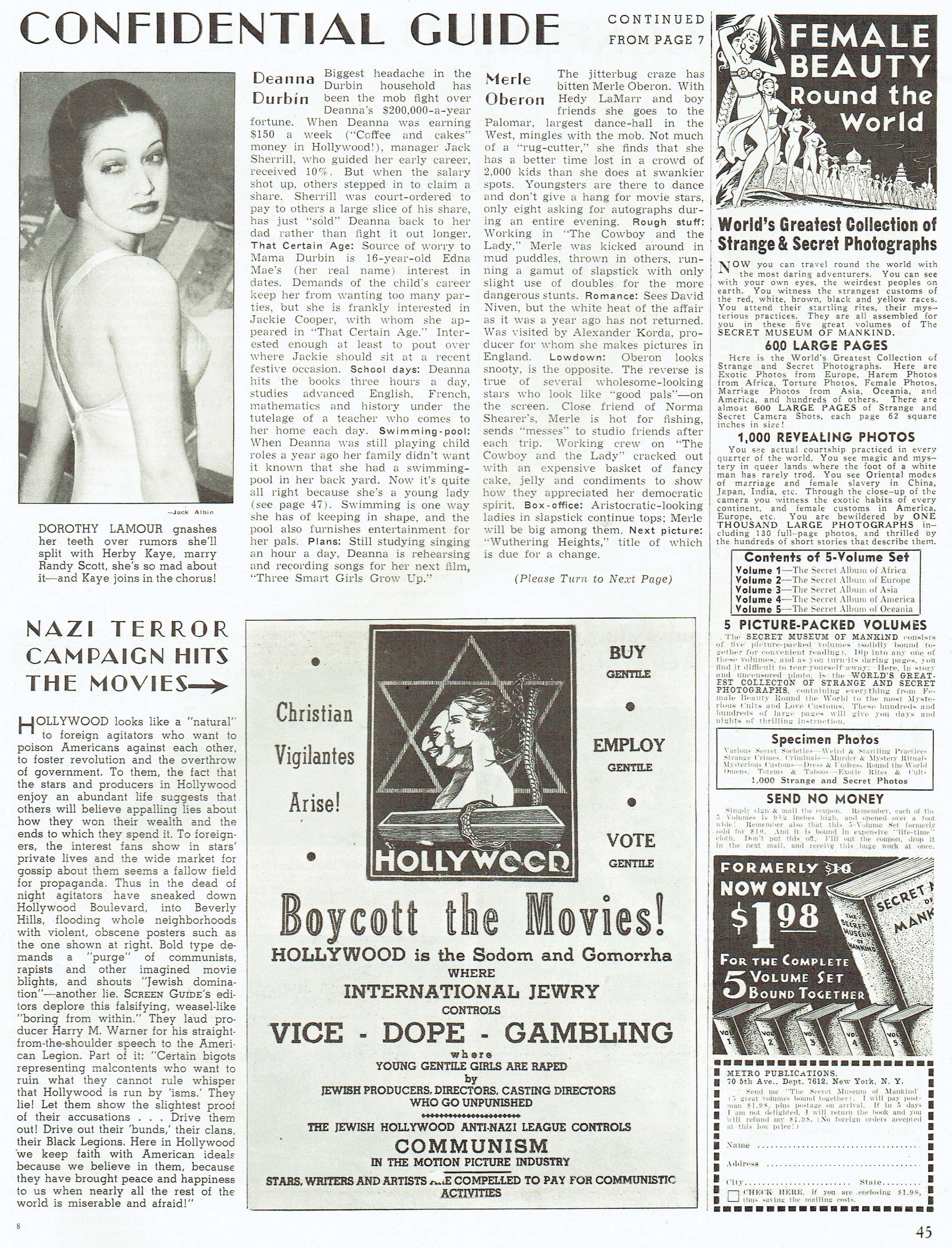 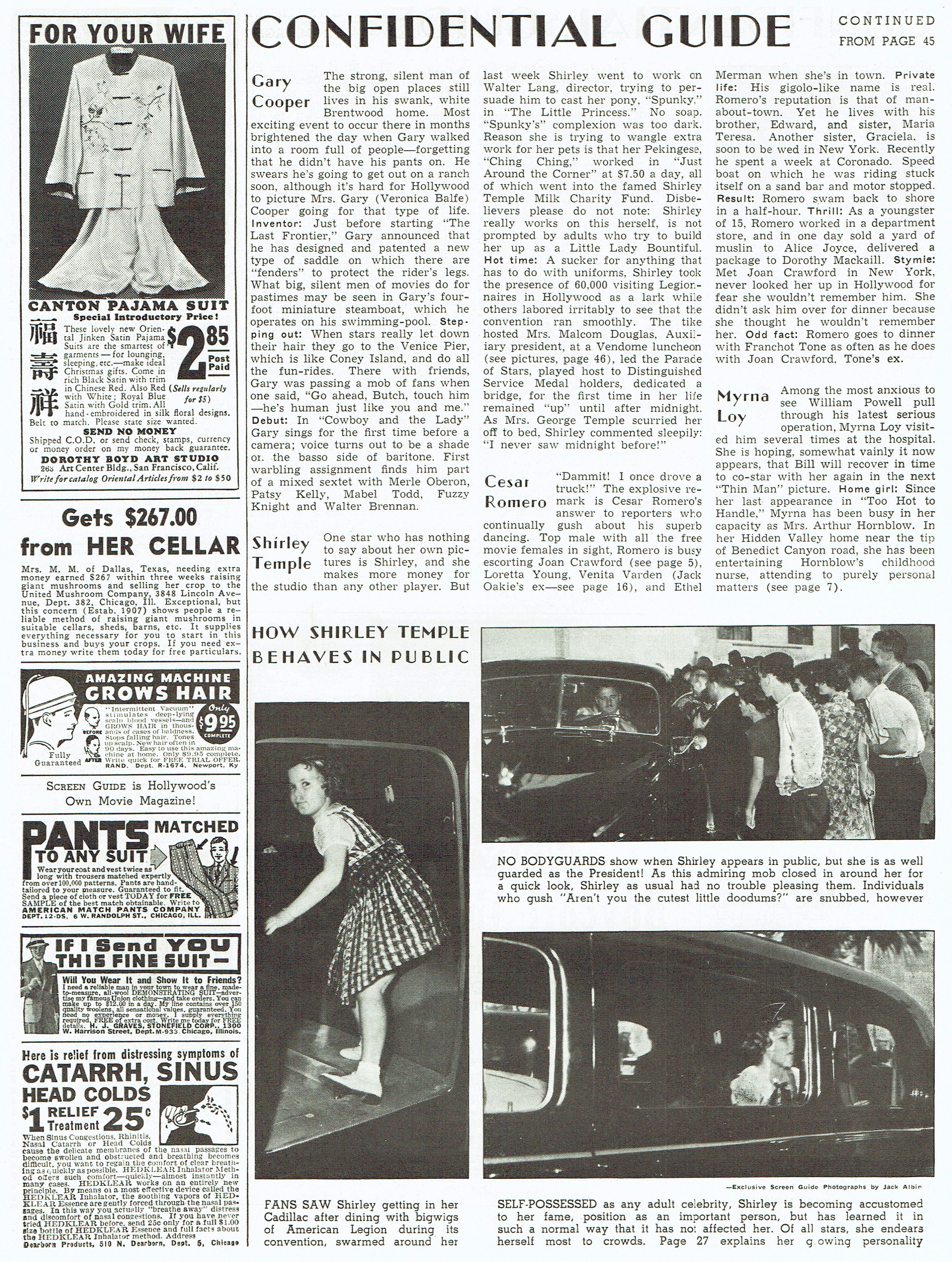 As you could tell from the cover design, Screen Guide instituted some minor changes with this issue. One of these was adding a table of contents, accompanied by some front-page briefs. One of the items states rumors are floating around the film capital that Greta Garbo has actually been dead for several years, and that a "substitute" has acted in her films. Sounds like a rumor from some 30-plus years later, right? (I suppose someone should spool "Camille" backwards and see if she says "I am the walrus" during the death scene.) 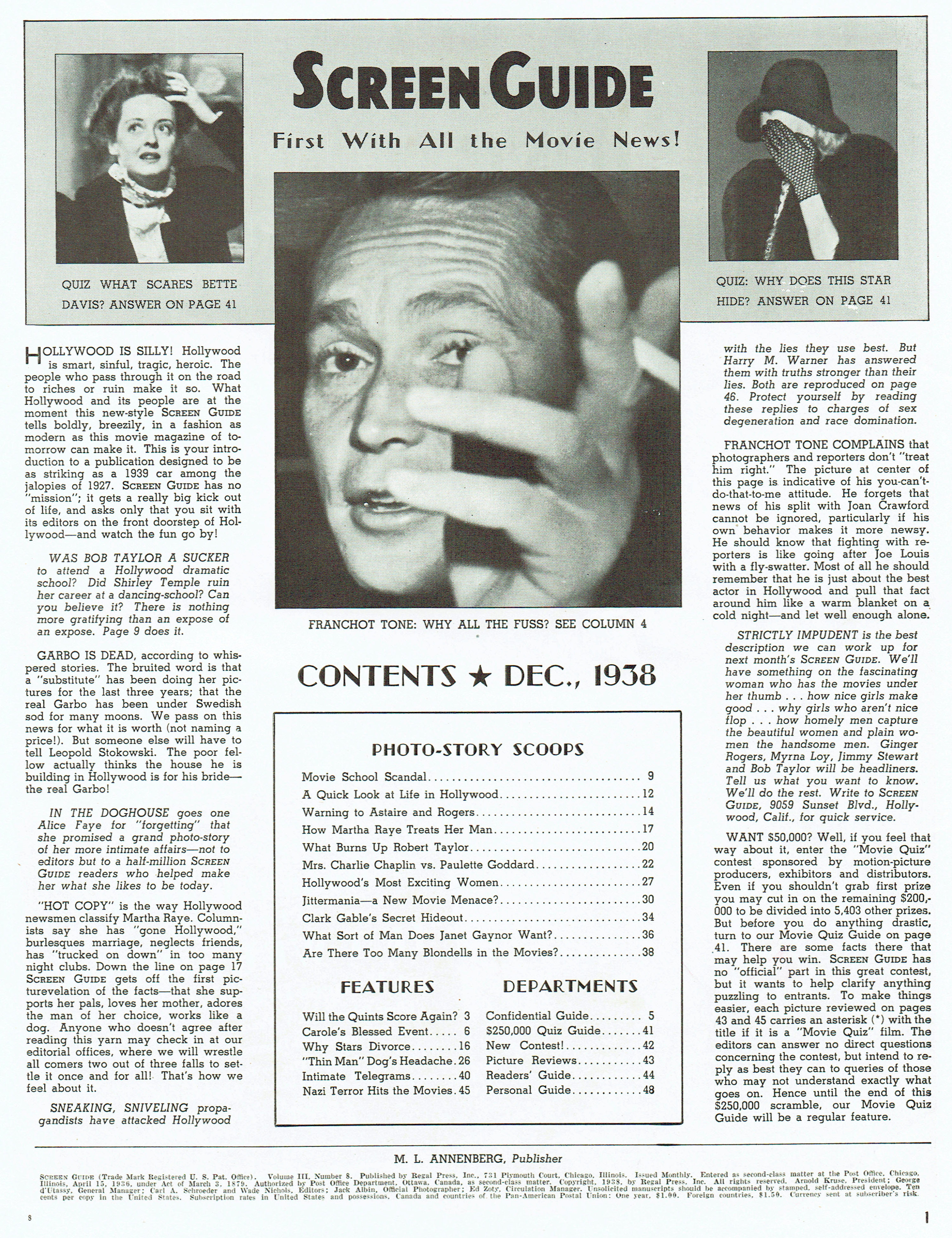 Not only did Gable's sheepdog (which I suppose wasn't named Martha) make the issue, so did some other Hollywood dogs, including the king of canine actors, Skippy (aka "Asta" from the "Thin Man" films, "Mr. Atlas" from "Topper Takes A Trip," etc.): 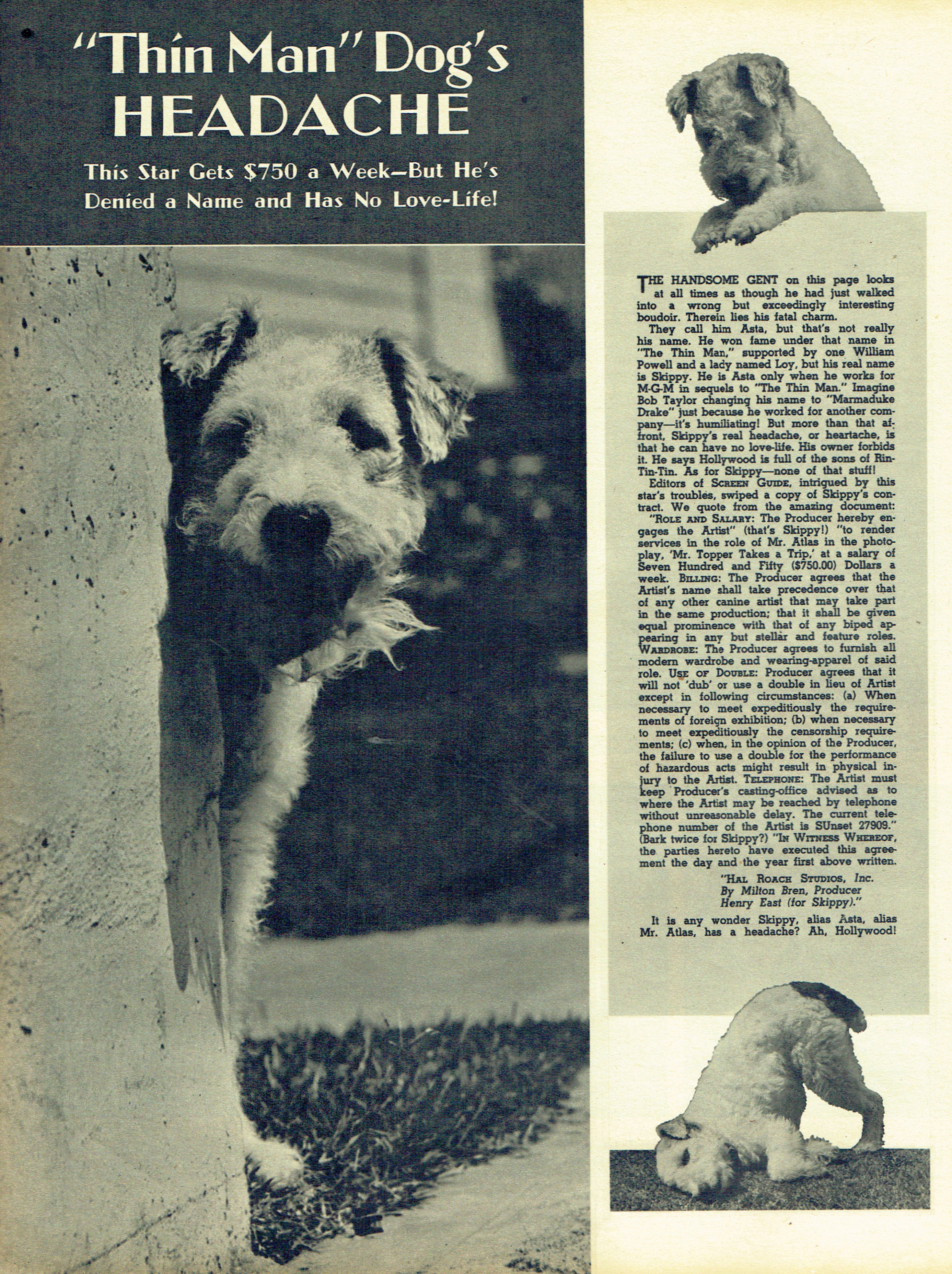 Two other dogs have a Tinseltown connection, as this pair of purebred Scotties are owned by Bette Davis, president of the Tailwaggers pet group -- and she was going to award each one to those who can come up with the best names for them. (Could a similar contest take place today? Probably not, but these were different times.) 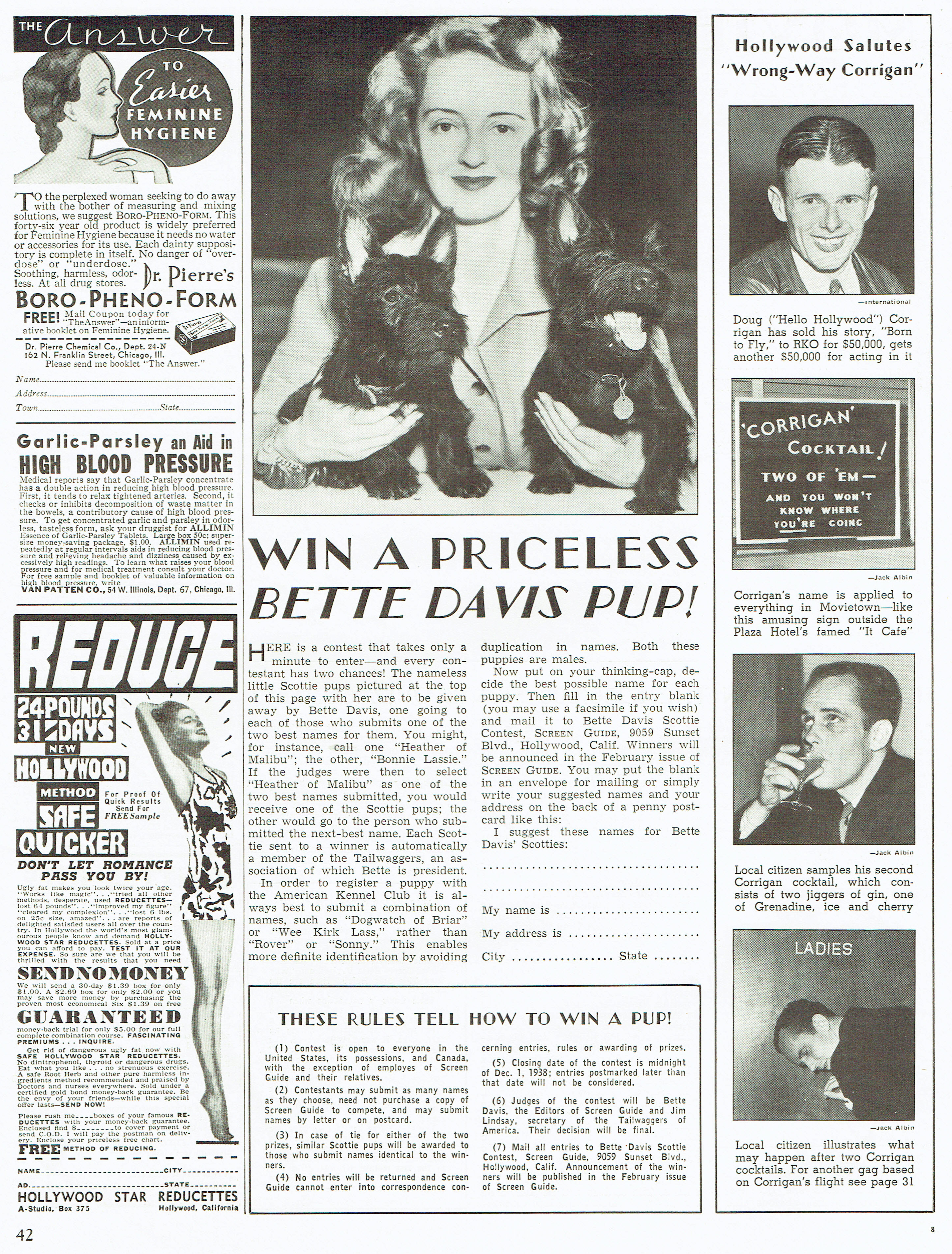 Our final batch of film ads begins, as always, with an MGM production on the inside front cover. This movie is based on a book written by the same man who wrote the story adapted for Lombard's 1940 film "Vigil In The Night": 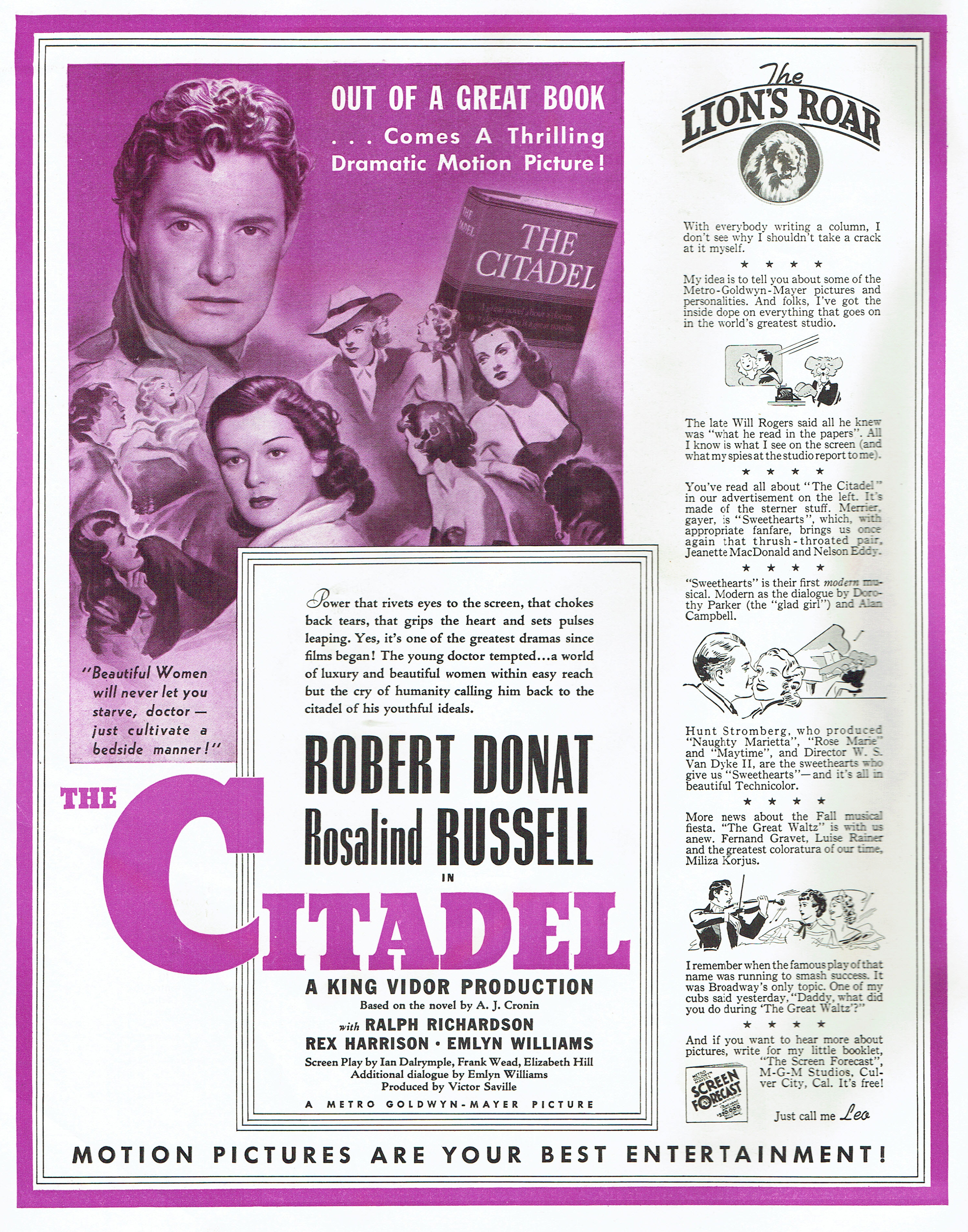 Ronald Colman, soon to co-star with Carole on radio, has royal dreams in "If I Were King": 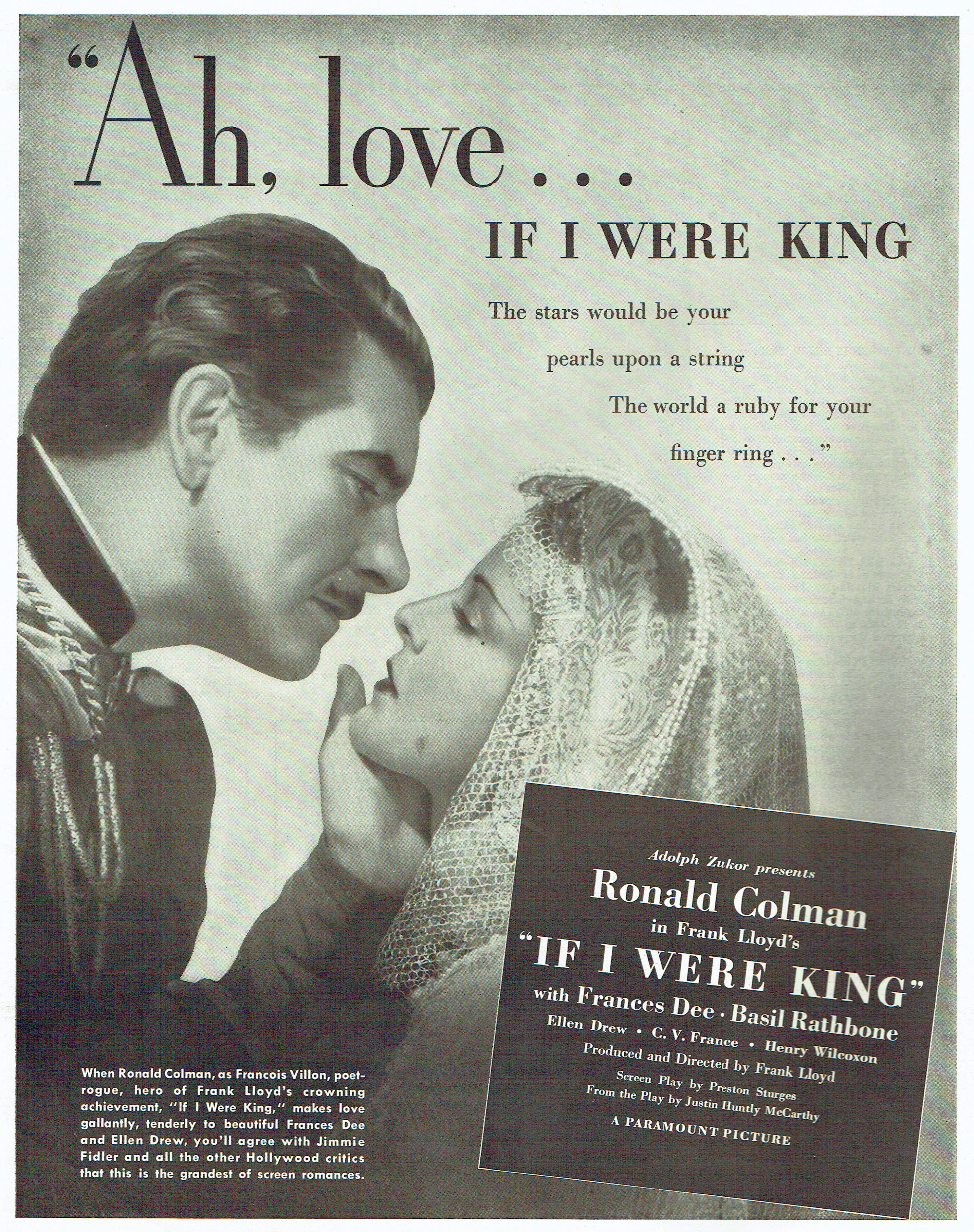 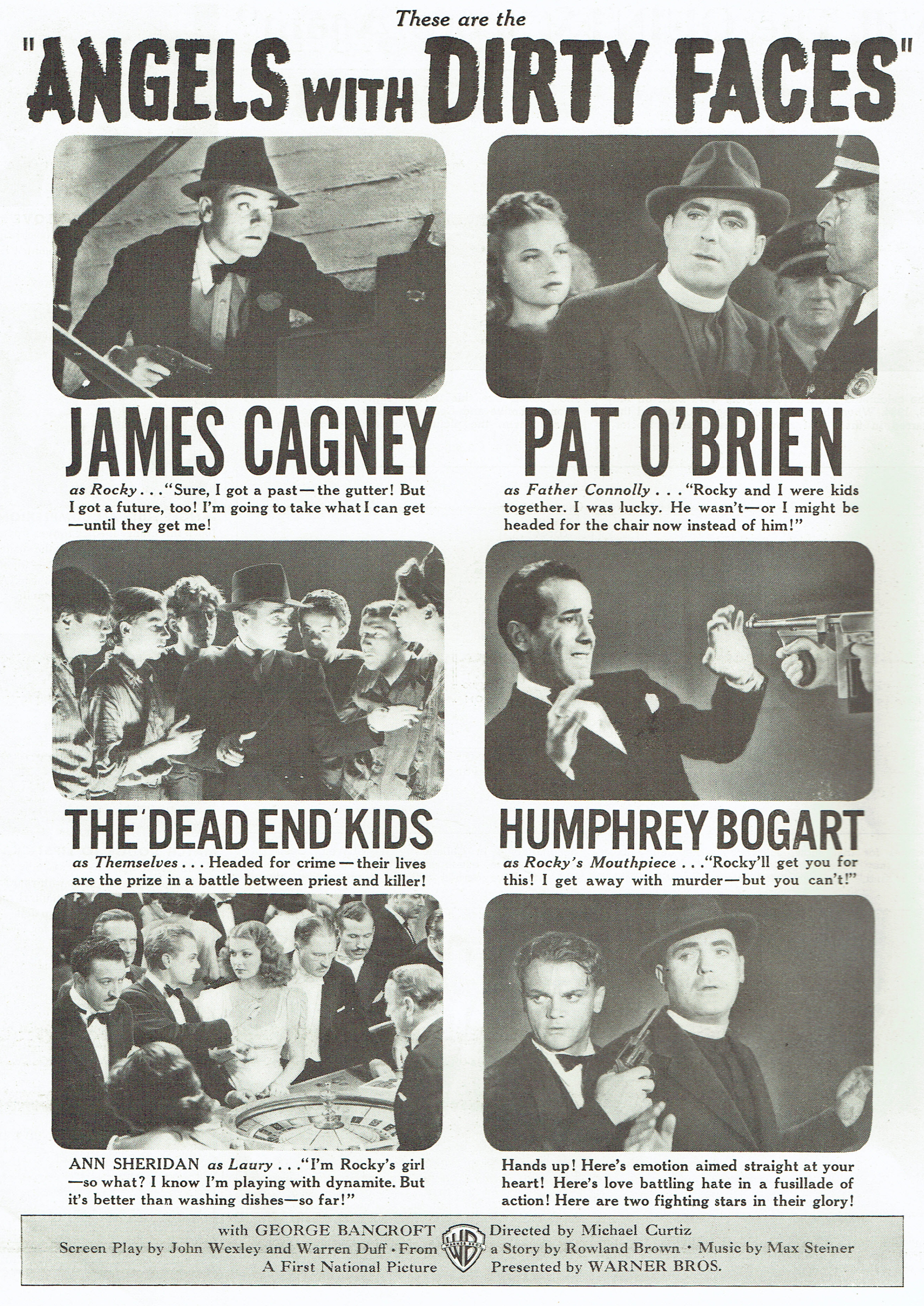 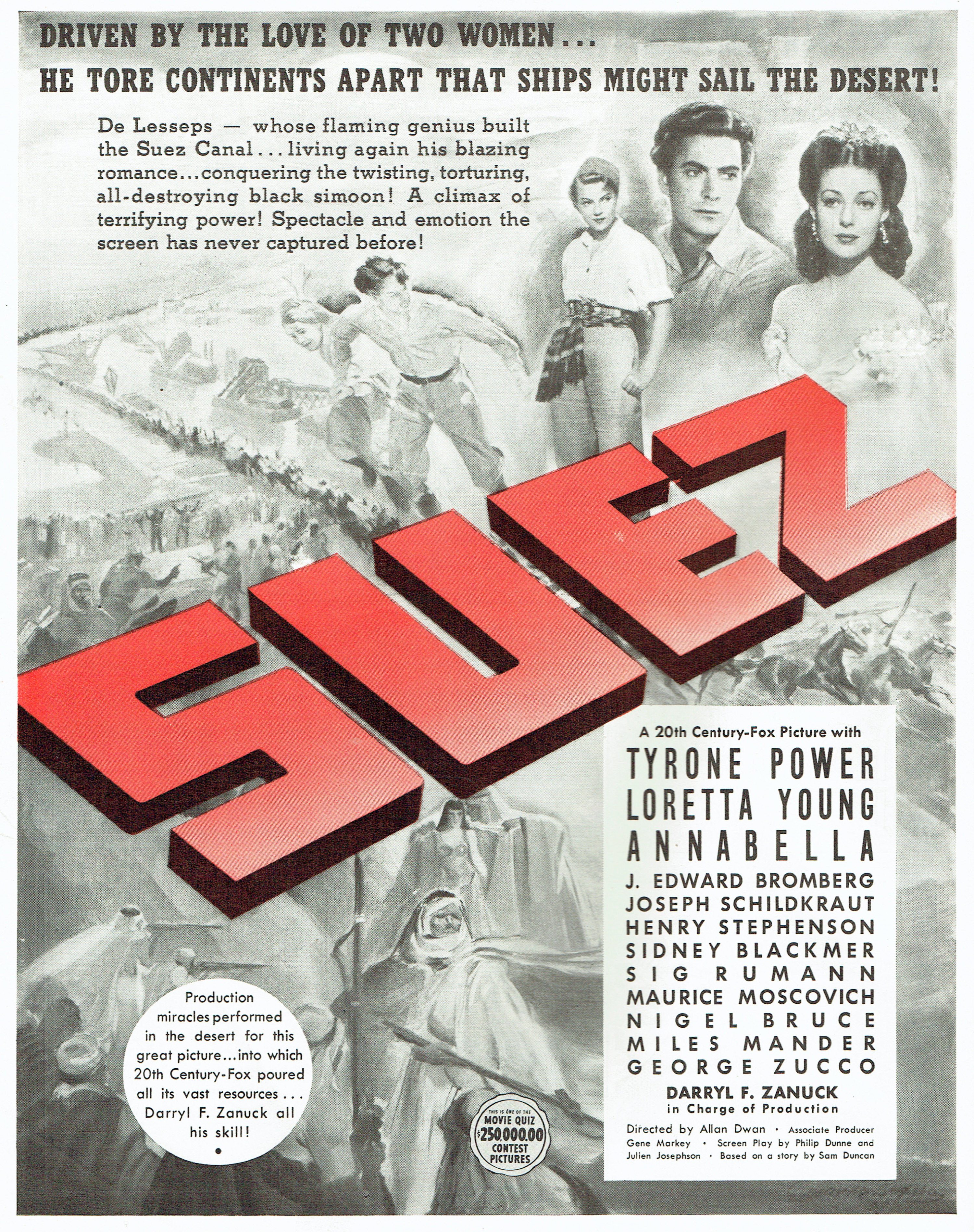 Speaking of Loretta, she graces the issue's inside back cover peddling Lux soap: 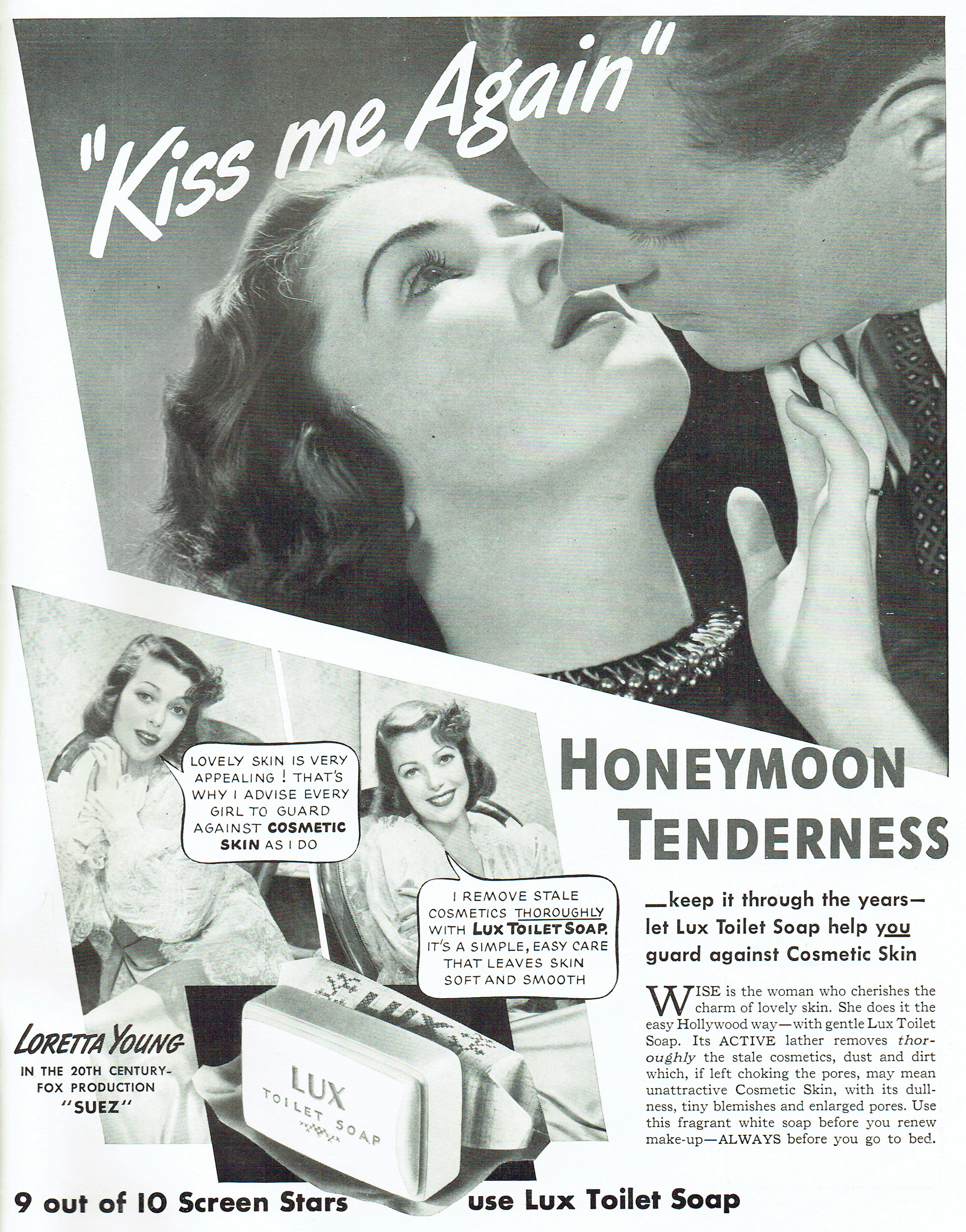 Incidentally, tomorrow marks the 101th anniversary of Young's birth, and a belated centennial tribute (whose hosts include my Facebook friend and Loretta's daughter-in-law, Linda Lewis) is set for 8 p.m. Jan. 30 at the fabled Alex Theater in Glendale. For tickets and additional information, please visit http://www.alextheatre.org/event/prospect-house-entertainment-glendale-arts-present-loretta-young-centennial-birthday-tribute.

Finally, with record cold enveloping much of the U.S., please bring your pets inside for the next few days. These predicted wind chills are life-threatening for both humans and animals.