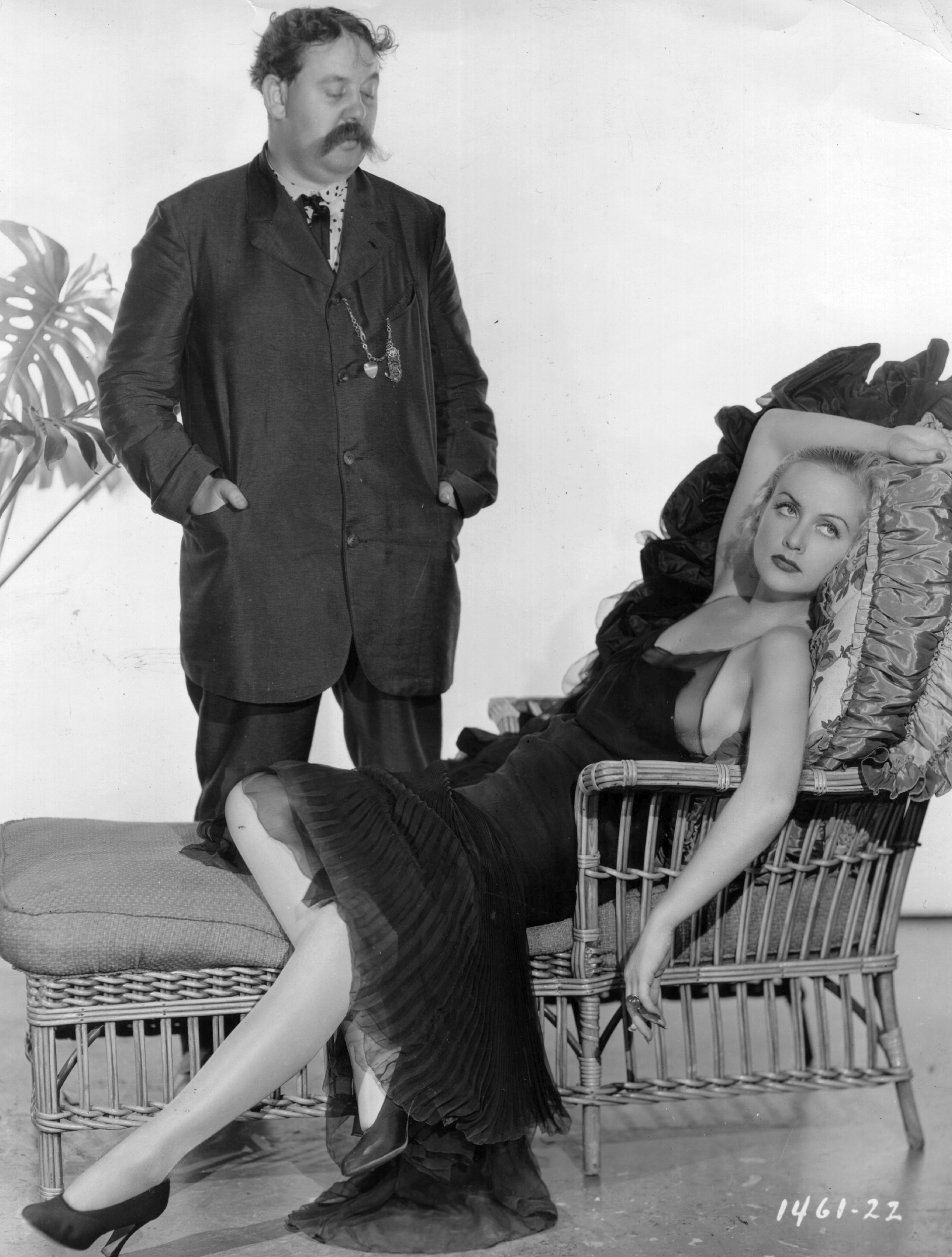 As one might guess, the biggest news concerning Carole Lombard in December 1933 was her latest release, "White Woman," the potboiler with Charles Laughton set in the Malayan jungle. Paramount played up the exotic angle in its advertising, such as this from the Dec. 3 Uniontown (Pa.) Daily News-Standard... 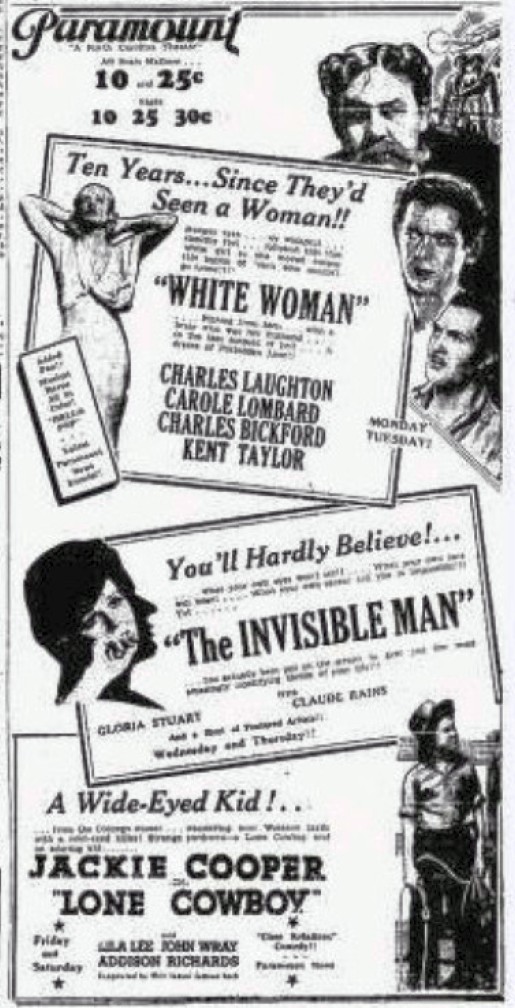 Many smaller newspapers of the time carried pre-written, obviously approving reviews from studio pressbooks (and since the Newspaper Archive primarily consists of smaller papers, that's where most of these items are from), but a few papers ran independently written reviews, albeit rarely bylined. These aren't at the level of James Agee, Pauline Kael or Roger Ebert, but they occasionally make some cogent points.

My birthplace of Syracuse, N.Y., has a strong history of film reviewing, and much of that is attributable to the old Syracuse Herald. In 1927, it began an organization called the Herald Cinema Critics Club (or Tri-C) that won acclaim throughout the industry for getting fans involved in intelligent movie criticism. Jack Harrower, who wrote under the pseudonym "Phil M. Daly" for Film Daily (get it?) saluted the society on its fifth birthday on Feb. 7, 1932, calling it "the Pioneer among fan organizations...voicing their opinions intelligently, constructively, sympathetically...embracing college professors and business men and women and high school students...who love the cinema...realize its possibilities...and are earnestly endeavoring to advance its critical standards." (I would love to learn more about this organization; perhaps I'll contact Syracuse University or the Onondaga County Public Library to see if they can track down more information.)

Anyway, here's what the Herald's anonymous critic wrote about "White Woman" on Dec. 2:

Three days later, Mississippi's Biloxi Daily Herald chipped in its opinion -- although it was found on the editorial page, of all places:

On Dec. 21, the Wisconsin State Journal in Madison had this to say:

Meanwhile, Lombard was working on her next movie, "Bolero," and I'm guessing George Raft really was giving her a workout, if this report from the Dec. 5 Reno Evening Gazette is indicative:

Move a bit west, to that day's Oakland Tribune, and we learn a "Bolero" cast member walked off the set:

Sally Rand's frustration was understandable; she had worked in silent pictures and in fact was a WAMPAS baby star in 1926 (an honor Lombard never received, although she probably would have gained it in 1930, when the award was canceled because of the ailing economy). Things soon were resolved, and Rand returned to the production.

And what about Carole's next movie? Louella Parsons announced what it would be in her syndicated column, shown from the Dec. 19 Hearst-owned San Antonio Light: 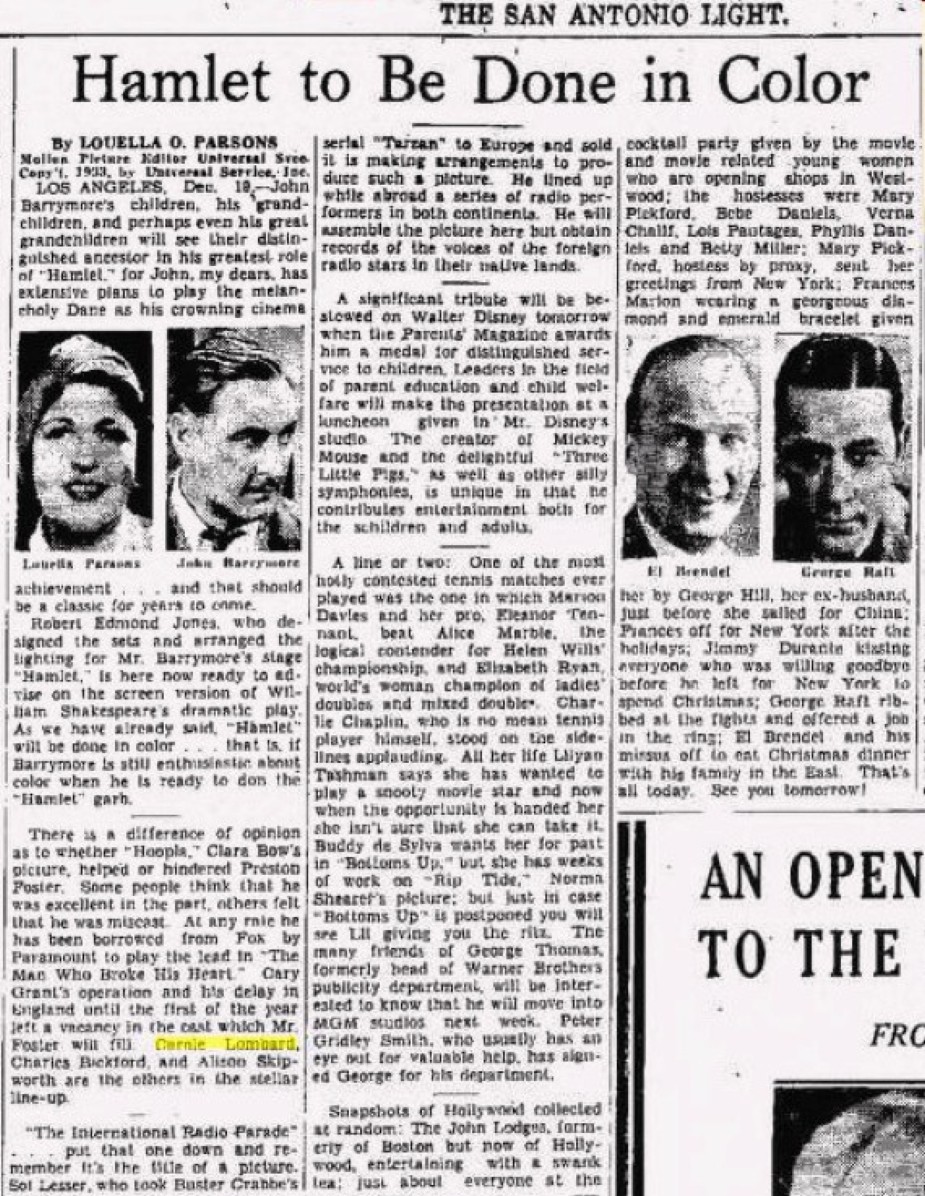 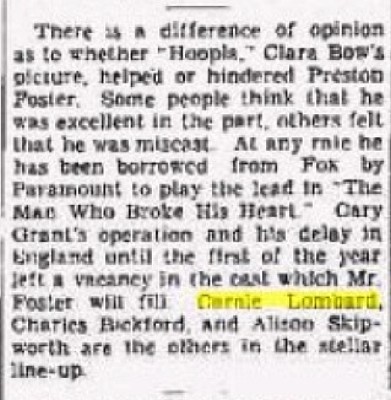 Three days later, Film Daily ran more or less the same news -- and note that while "White Woman" was reviewed in Biloxi, it was banned in another part of the Bible Belt: 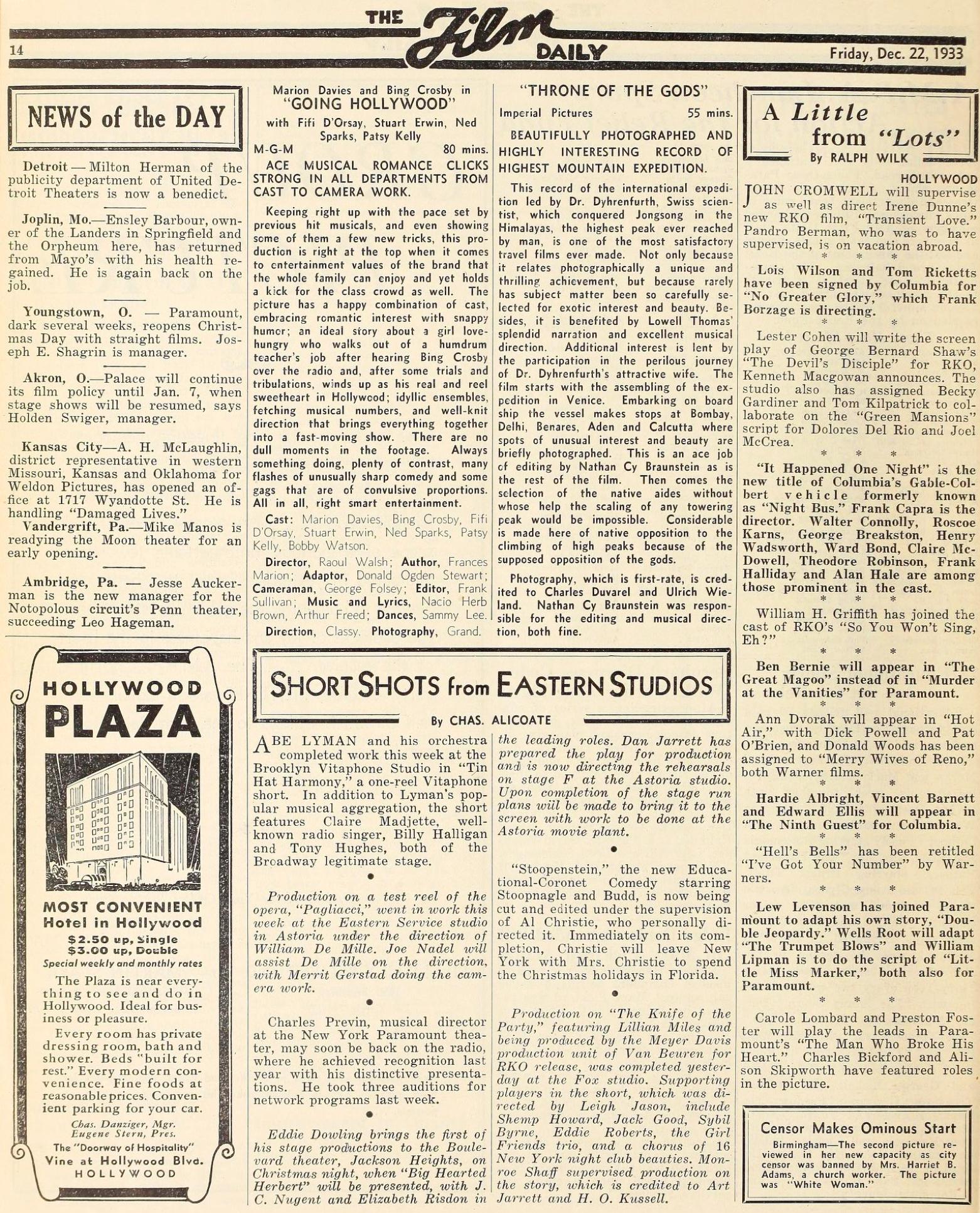 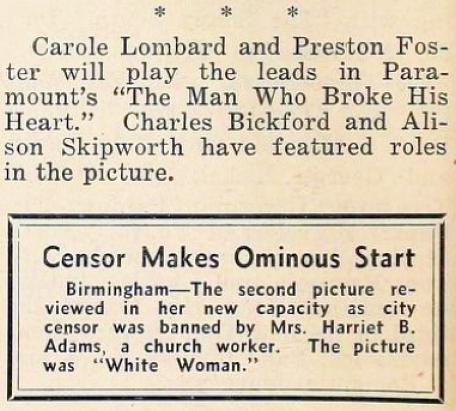 (Elsewhere on that page, we learned that "Night Bus" -- for which Lombard had declined a loanout to Columbia in order to make "Bolero," for which Paramount had big plans -- had been renamed "It Happened One Night." But, as we all know, a change in title probably won't mean anything.)

As things turned out, of course, "The Man Who Broke His Heart" was one of those productions Carole never appeared in; heck, the Internet Movie Database doesn't list a film by that title.

And in the final few days of 1933, look what was playing at the Olympic Theater in Steubenville, Ohio, according to that city's Herald-Star on Dec. 20: 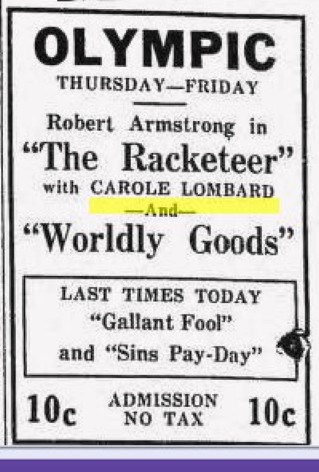 Perhaps Robert Armstrong's starring in that year's blockbuster "King Kong" had something to do with its re-emergence (as if he were the reason for that film's runaway success). Whatever, by late 1933 even the best movies from 1929, and "The Racketeer" clearly wasn't one of them, must have seemed static and creaky. (As for "Worldly Goods" -- assuming it's not referring to a similarly titled silent from 1924 -- it's a drama starring James Kirkwood and Merna Kennedy, was produced by the obscure Trem Carr Pictures, and is deemed a lost film.)

One of the more interesting things Lombard was involved in during December concerned the recently ended Prohibition, joined by other cinema legends. Back to the Syracuse Herald, this time from Dec. 8: 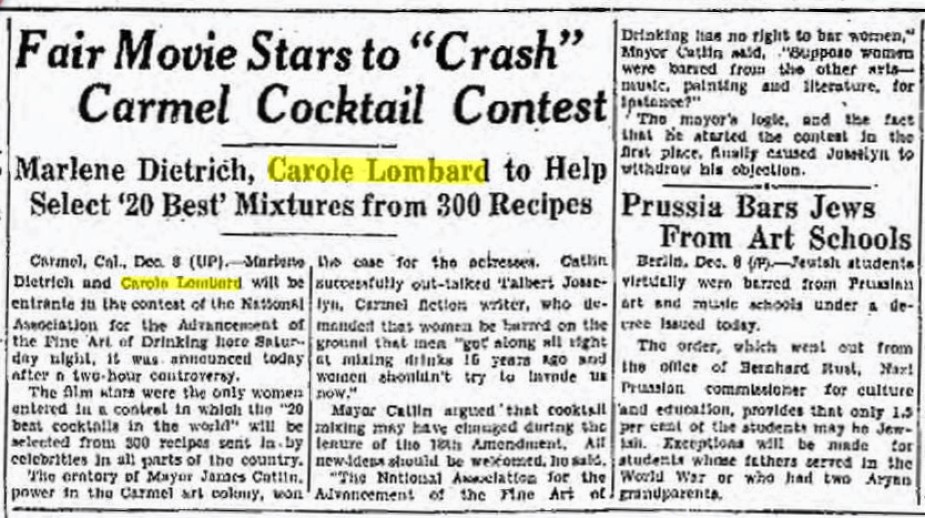 That brief in the third column brings us back to the real world...and what sadly was to come.

More information on the cocktail contest was found in the next day's Oakland Tribune: 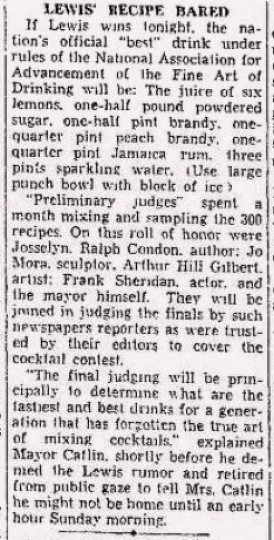 How did Lombard and Dietrich fare, not to mention W.C. Fields? And who won the contest? Here, we hit a dead end. If anyone's near Carmel, please check the library or historical society and find out. (Oh, and say hi to Doris Day and Clint Eastwood for me.)

Three years before Lombard's life was changed at a Mayfair party, she attended an earlier one -- squired by Raft -- and drew some attention. Here's part of Parsons' column from the Dec. 6 San Antonio Light... 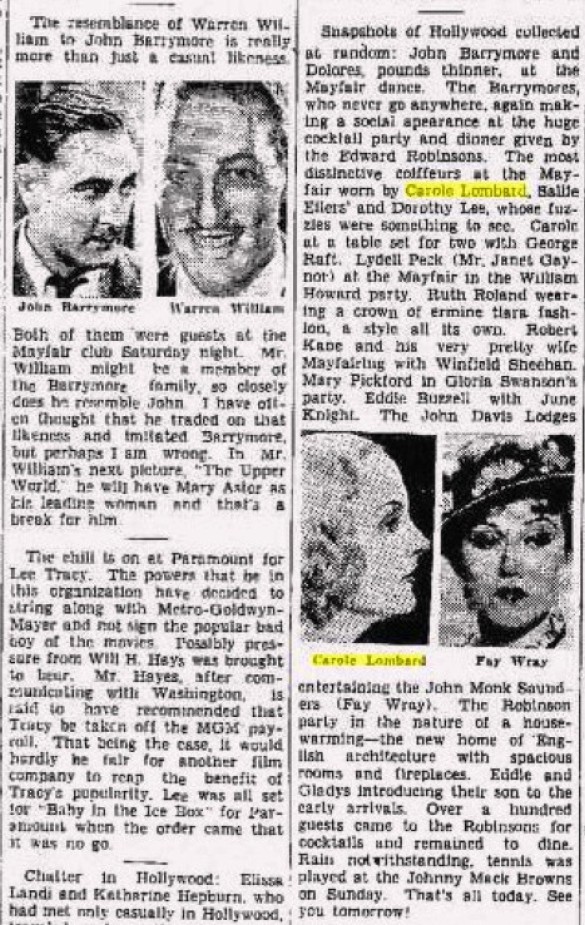 ...Harrison Carroll's "Behind The Scenes In Hollywood," from the Dec. 7 Tyrone (Pa.) Daily Herald...

...and Gwynn's "Hot From Hollywood" in the Dec. 8 Hagerstown (Md.) Morning Herald: 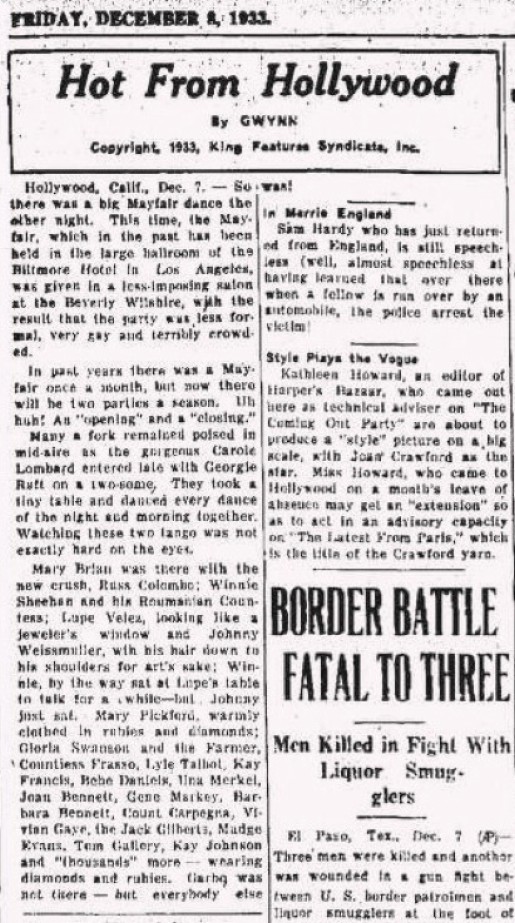 (Note that Russ Columbo attended, but was accompanied by Mary Brian, the actress who replaced a balking Lombard for "Hot To Handle" earlier in the year.)

Carole was listed among the best-dressed stars in the Dec. 26 Hammond (Ind.) Times:

Want some visual proof? Here she is, in the Dec. 1 Middletown (N.Y.) Times Herald... 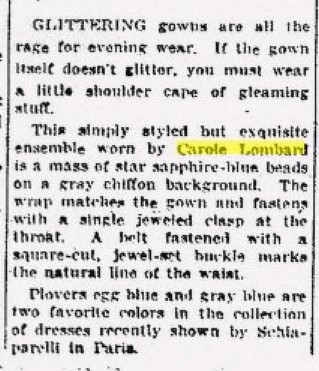 Lombard made the Dec. 17 Sandusky (Ohio) Register, but this almost certainly is Paramount-produced material since all the names in the column hail from that studio:

This item, from the Dec. 26 Edwardsville (Ill.) Intelligencer, probably originated at Paramount, too: 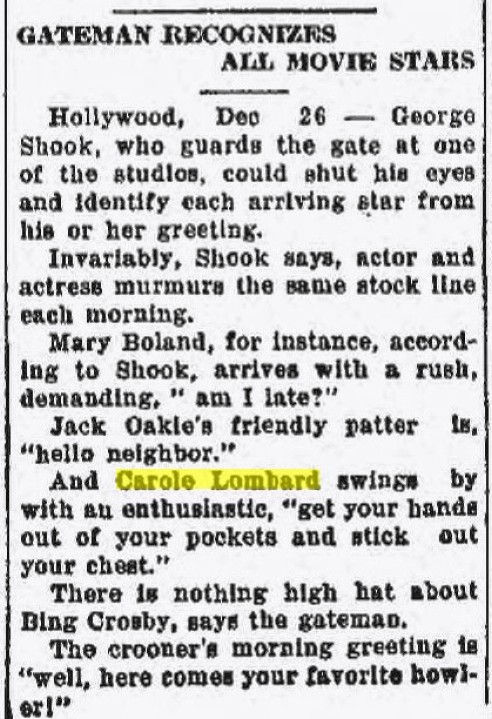 And here's Louella again, this time from the Dec. 30 San Antonio Light, letting us know what Carole got for Christmas: 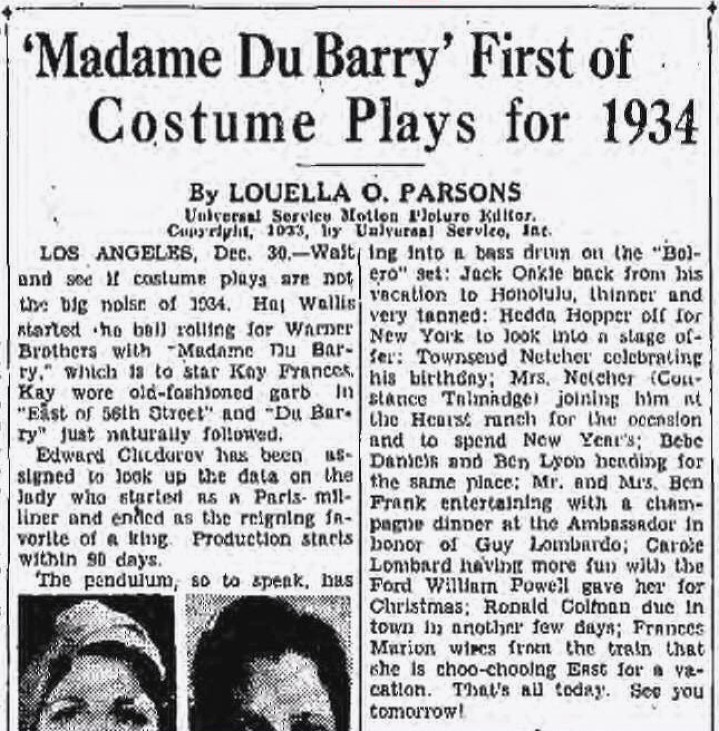 How many people do you know who received a car as a gift from the spouse they divorced that year?

The Newspaper Archive is a wonderful resource, but for those of us doing classic Hollywood research it has one serious drawback -- the almost-complete absence of Los Angeles or Hollywood dailies. It does have material from a few local weeklies, however, such as the Van Nuys News, which ran this item on Christmas Day: 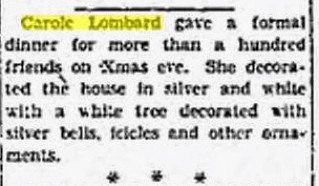 I think this was when Carole was still in Beverly Hills, as she didn't move into her Hollywood Boulevard house until the following spring. Adjacent to the item was this ad from Pacific Electric, suggesting people use its services to visit Pasadena on New Year's Day: 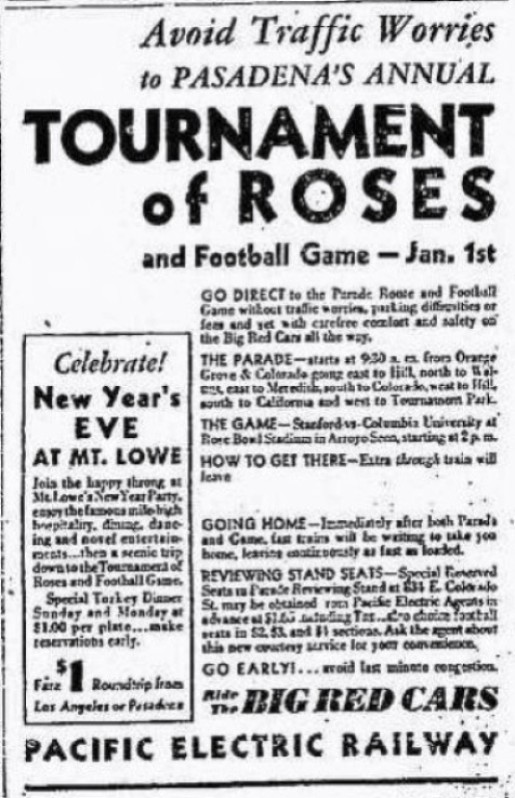 (That's right -- Columbia was playing in the Rose Bowl. And perhaps a young New Yorker named Vin Scully listened to the game that day, little realizing he would become a Los Angeles radio legend, by way of Fordham University and Brooklyn, and serve as Tournament of Roses grand marshal 80 years later.)

But as for Lombard, she would begin 1934 -- which would be a pivotal year for her -- with an "open house." The lowdown on how Hollywood would welcome the new year was found in the Dec. 31 Jefferson City (Mo.) News and Tribune: