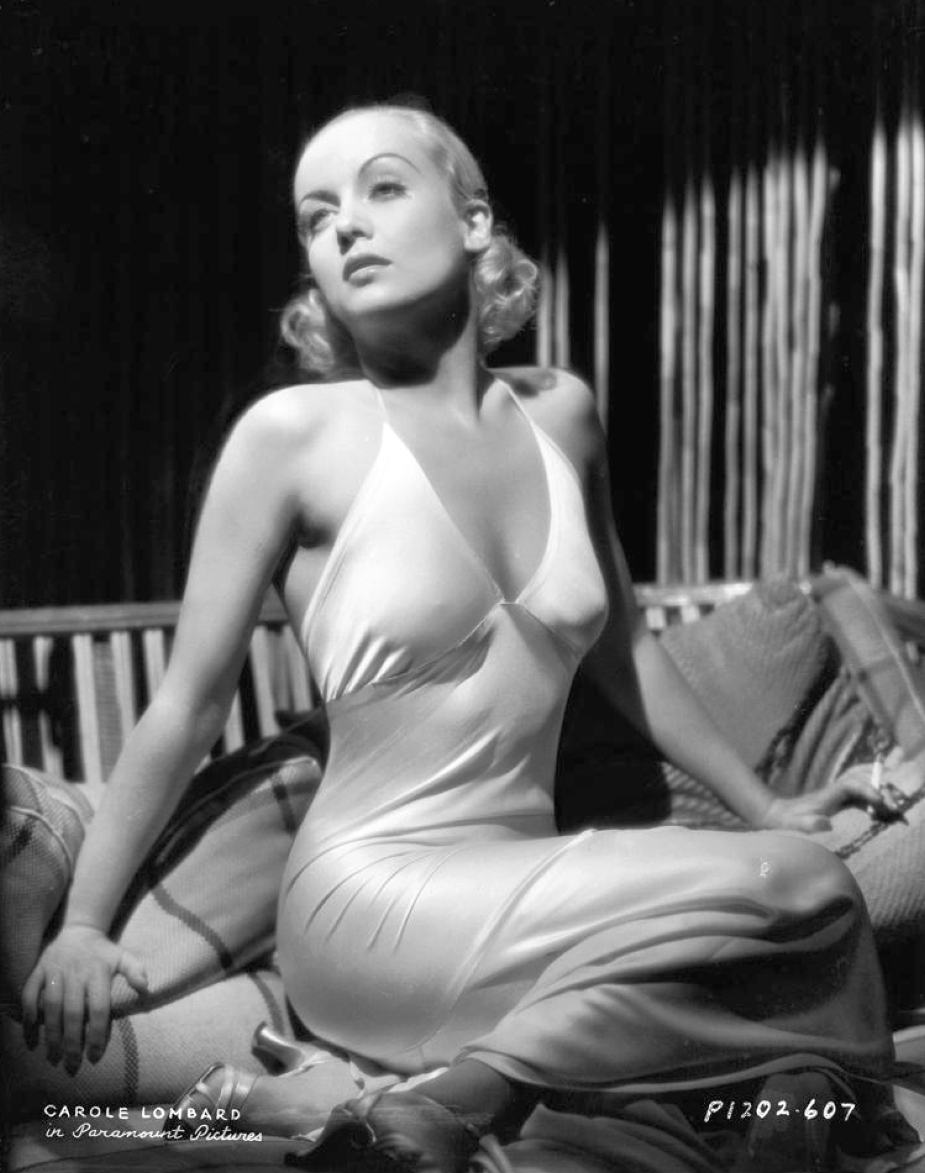 Her one-time nickname "Carole of the curves" may have been more applicable to the late 1920s, but although Carole Lombard's body had streamlined from shapely to sleek, it still awed many -- especially in a skin-tight gown such as seen above. It was crucial for her and other stars of the day to retain such splendid figures, magnified to giant size at big-city cinema palaces...and a movie magazine sought to explain just how they did it. 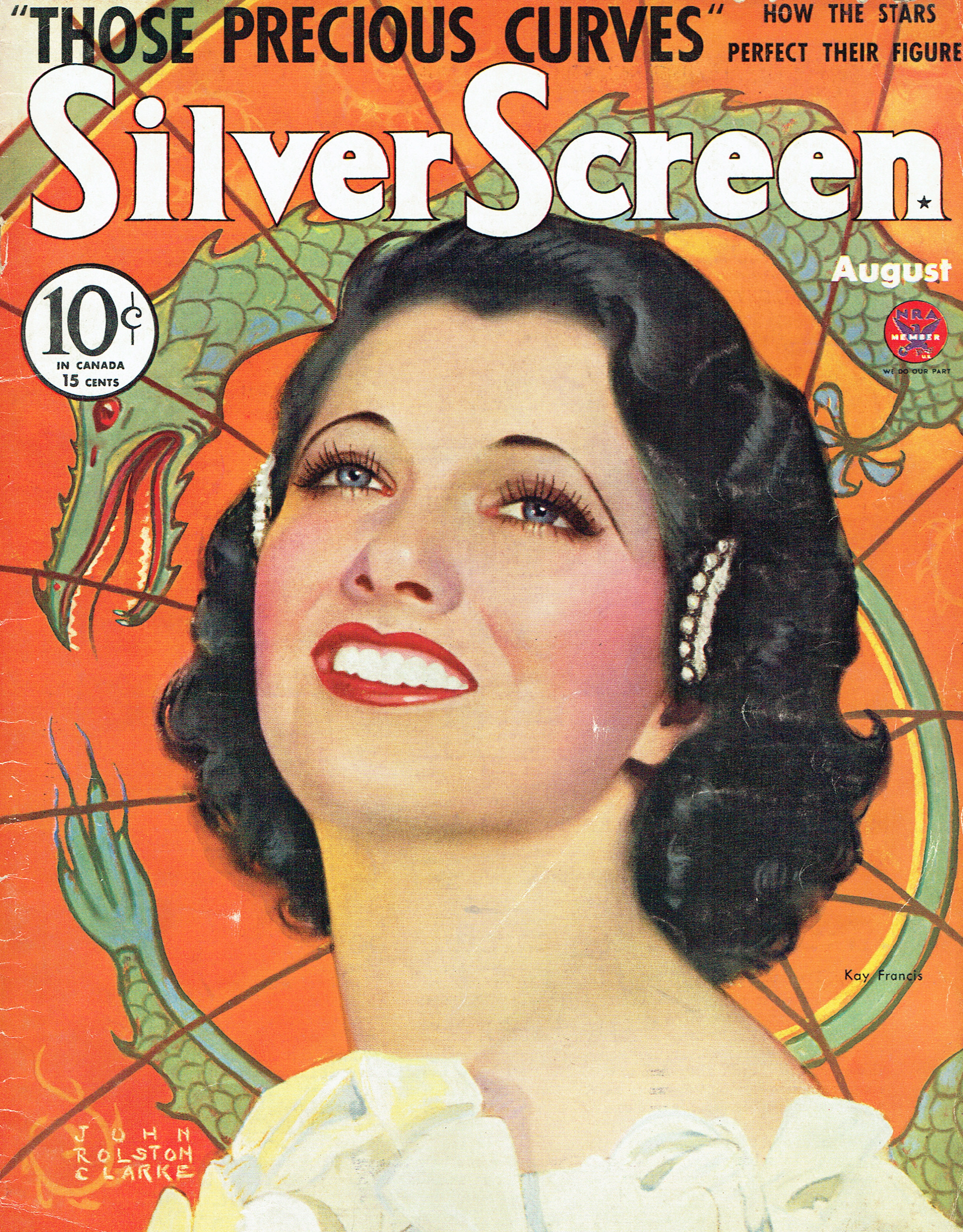 ...featured "Those Precious Curves," by Elizabeth Wilson, inside: 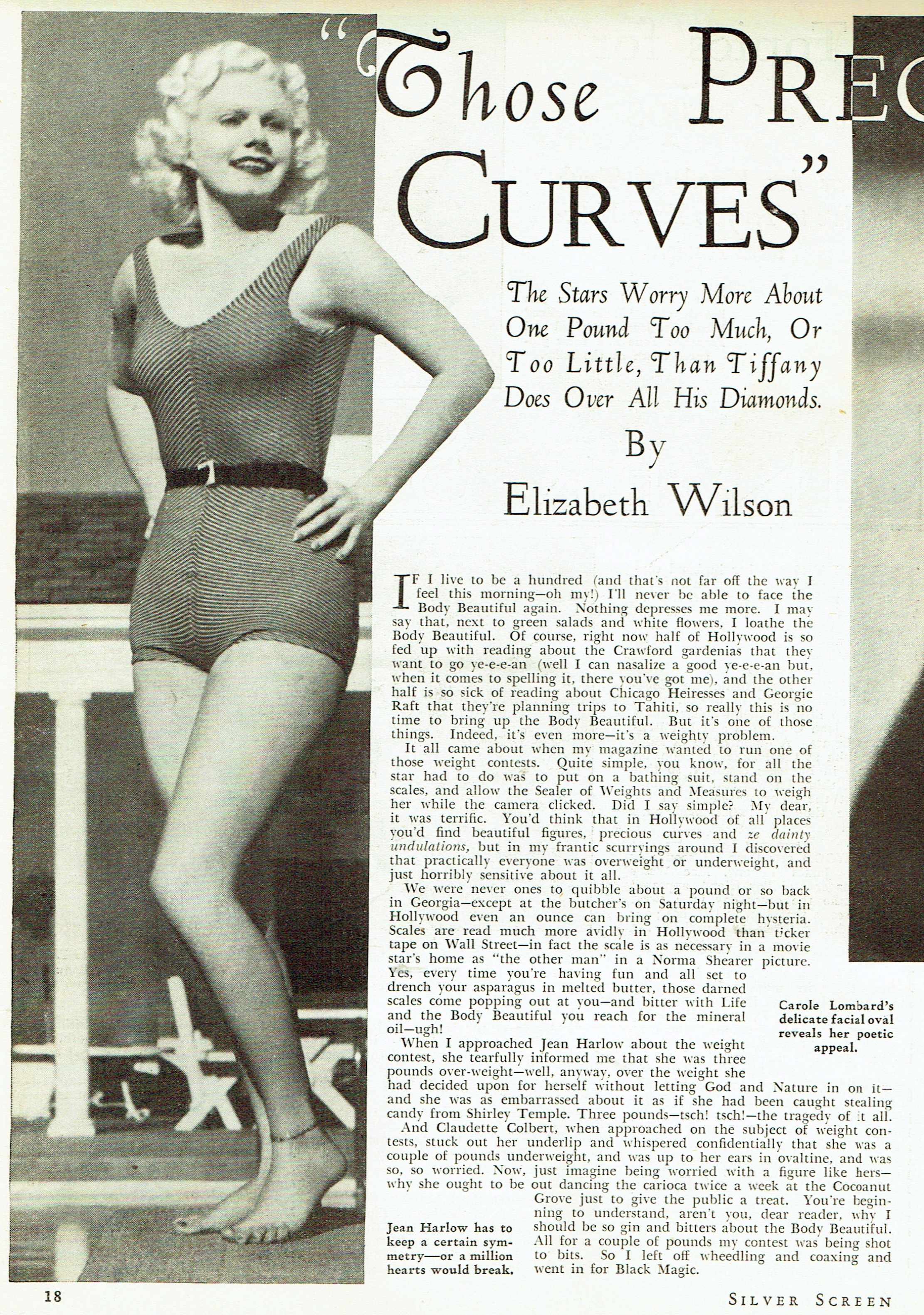 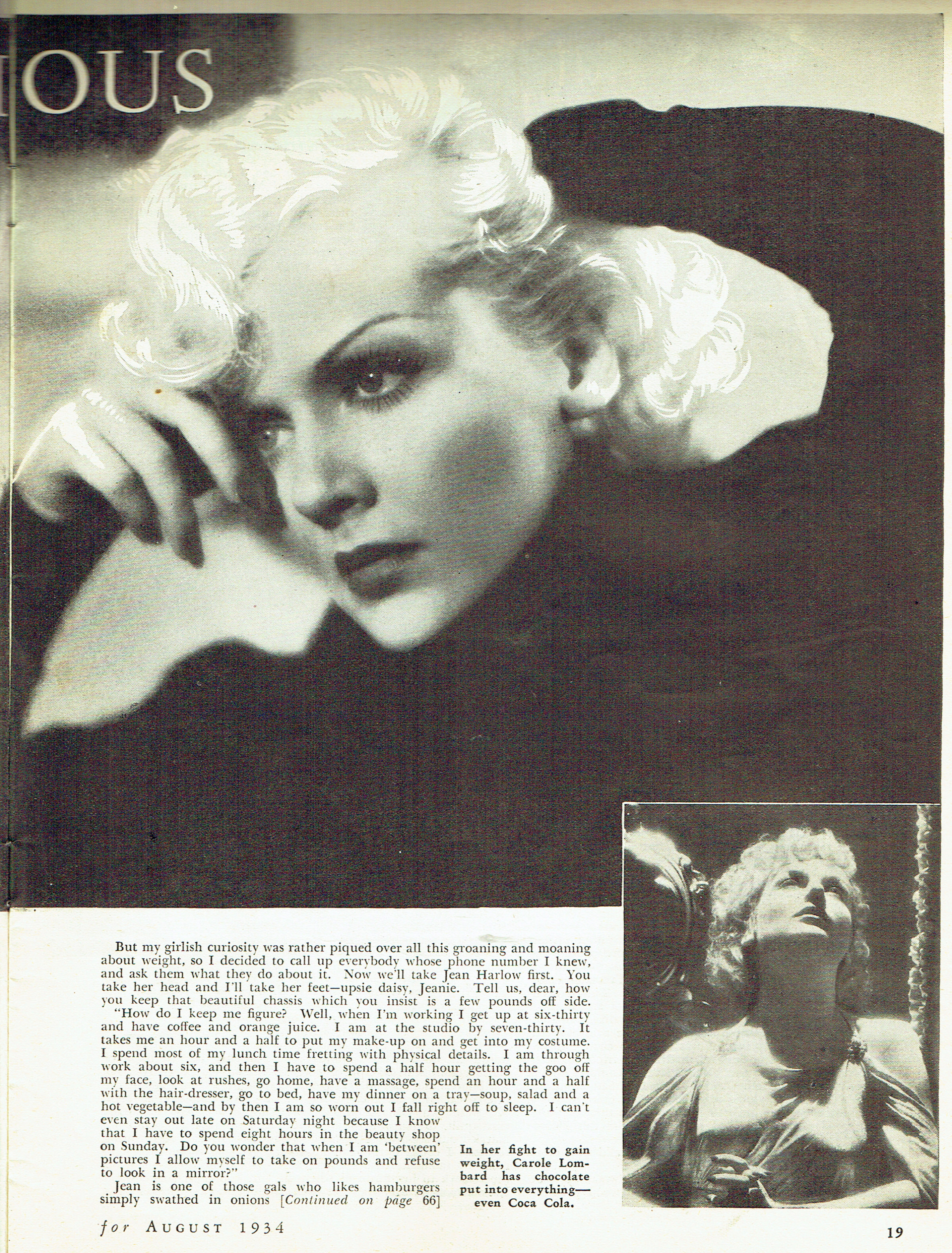 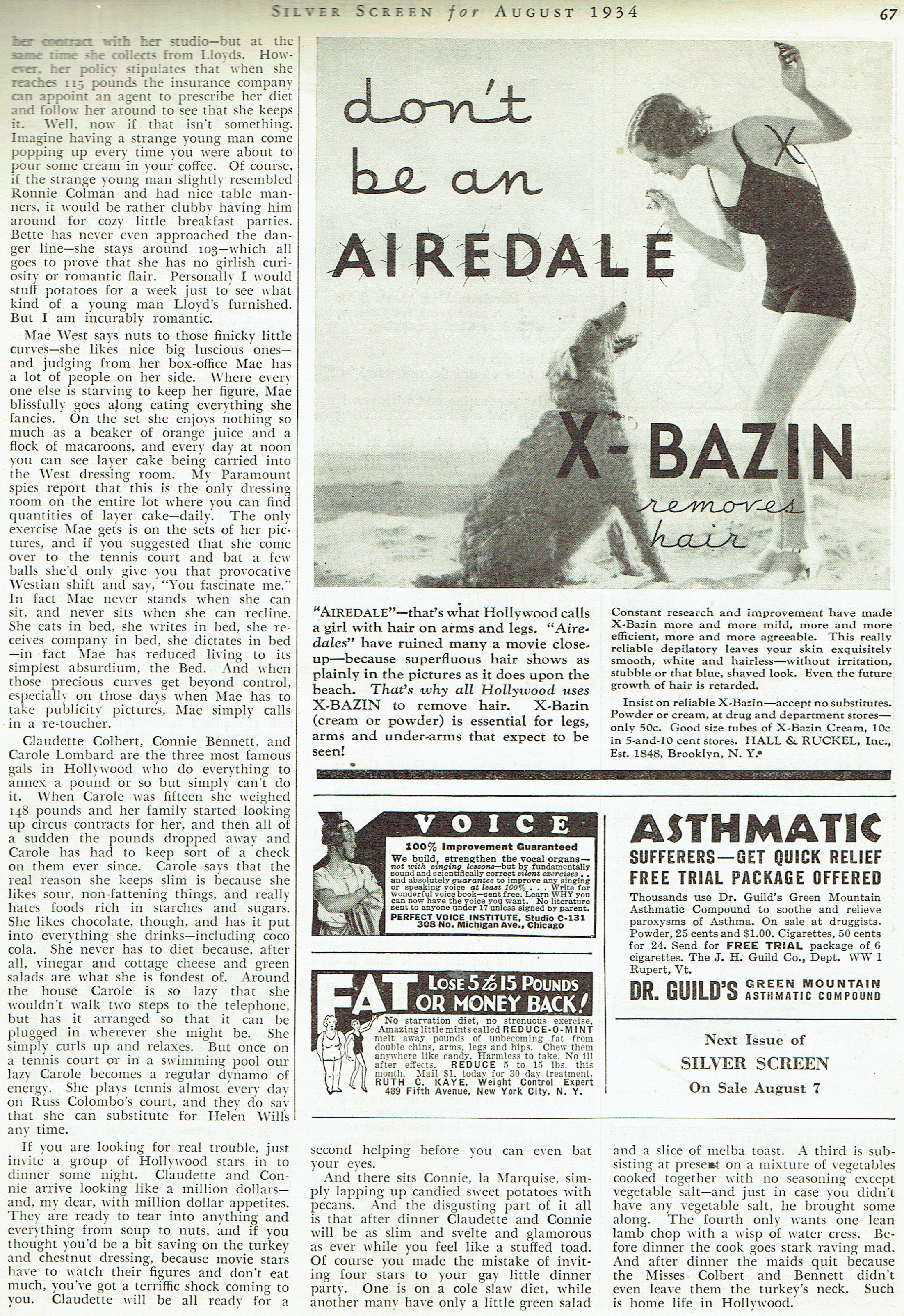 Despite being featured in two photos, there's relatively little on Lombard in this story. In fact, you can read all of it in one paragraph: 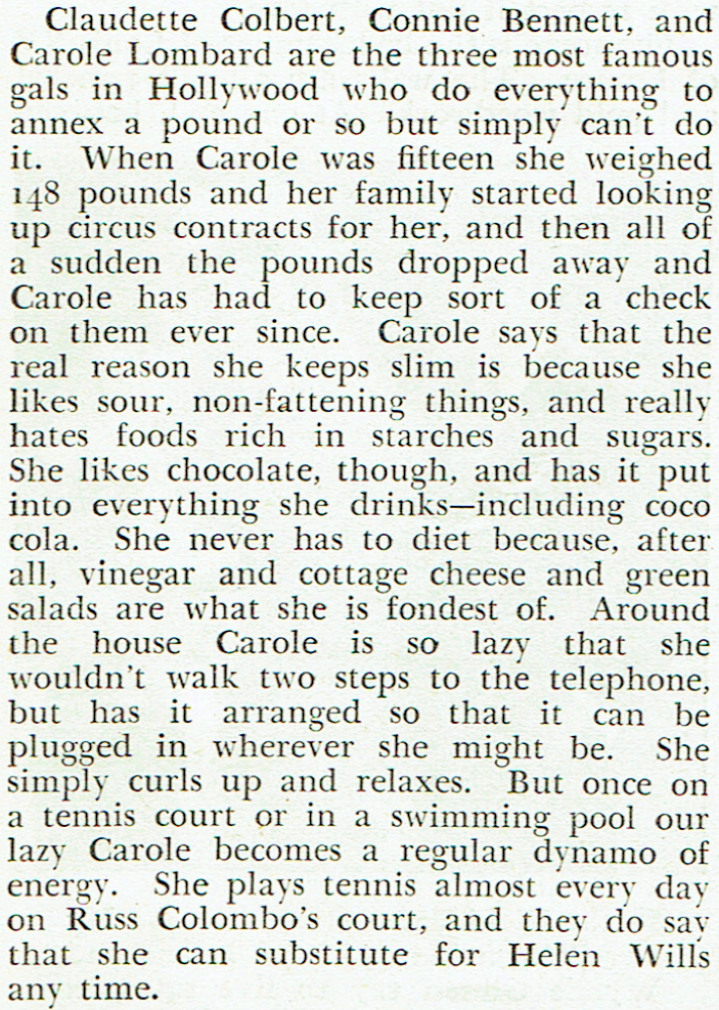 I'm not certain whether seeing the words "circus contracts" made Carole chuckle or cringe in reference to her prior problems with weight, but Wilson does a nice turn of phrase with the pun "coco cola." And I've always associated the line "laziest gal in town" with Marlene Dietrich.

That's about it for a Lombard presence in this issue, but there are some other things here that warrant attention. For example, cover girl Francis (a good friend of Carole's dating back to the days both were at Paramount) addresses a number of rumors about her in an article written by Jimmie -- oops, make that James -- Fidler: 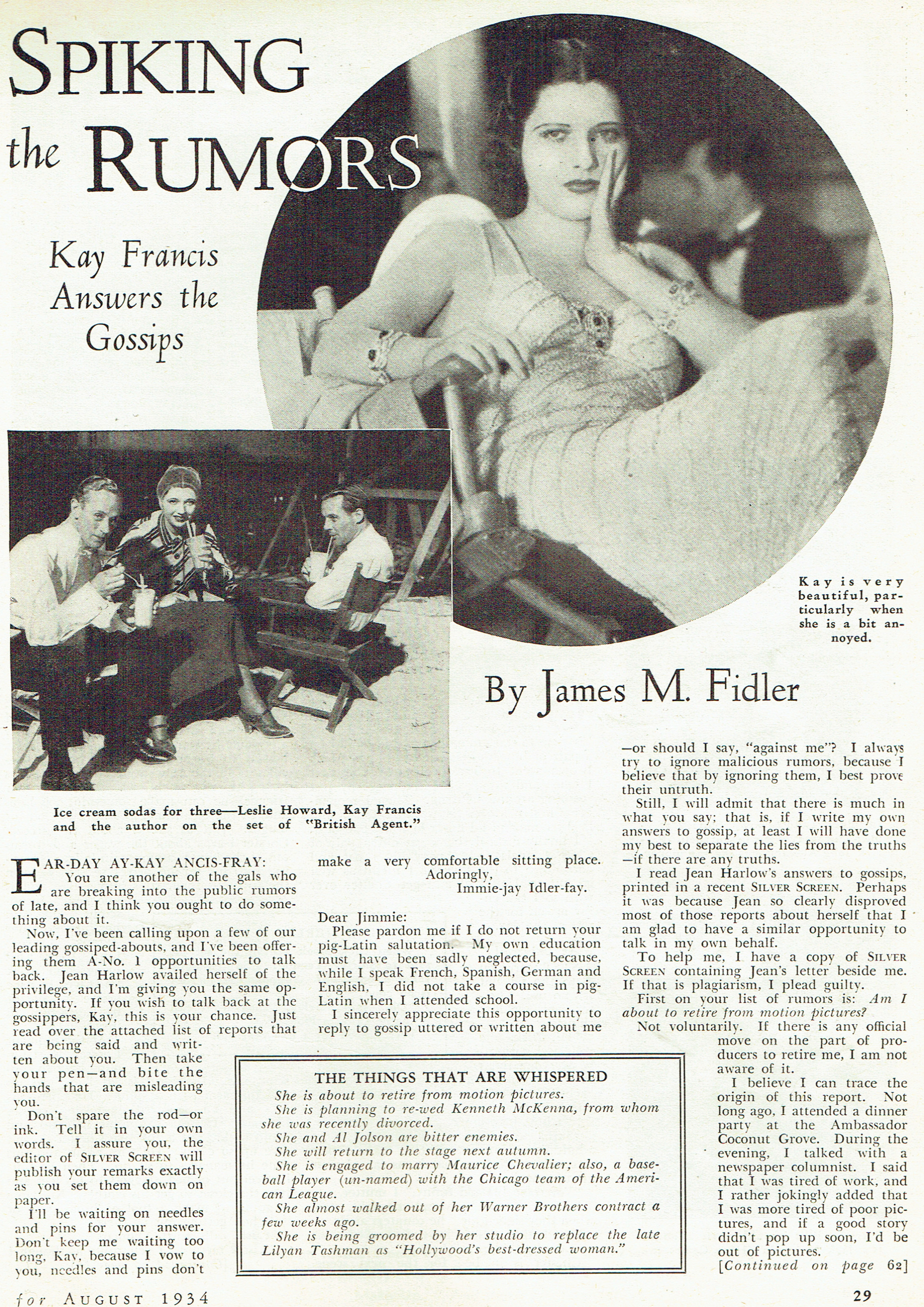 A thoughtful entry from Francis (now I'm going to have to check on White Sox rosters of the early to mid-'30s to guess which player was romantically linked with her!), and I'm confident, judging from its tone, that it emanates from her own pen (or typewriter). Of course, based upon Kay's diaries -- which have been the basis for at least one biography in recent years -- there may have been rumors about her that no fan magazine of the time would touch.

Francis was among the tallest of '30s actresses, measuring between 5'7" and 5'9"; that's fairly well-known. But one of her contemporaries, Loretta Young, was nearly as tall (family members say 5'7", while the Internet Movie Database lists her at 5'6") -- though few think of her that way. Perhaps it was because, according to relatives, she didn't reach her full adult stature until age 21 (which means she literally grew up on screen before the public's eyes). Here, at about the time she finished growing, is a story on the ethereal actress called "Sparkling Loretta": 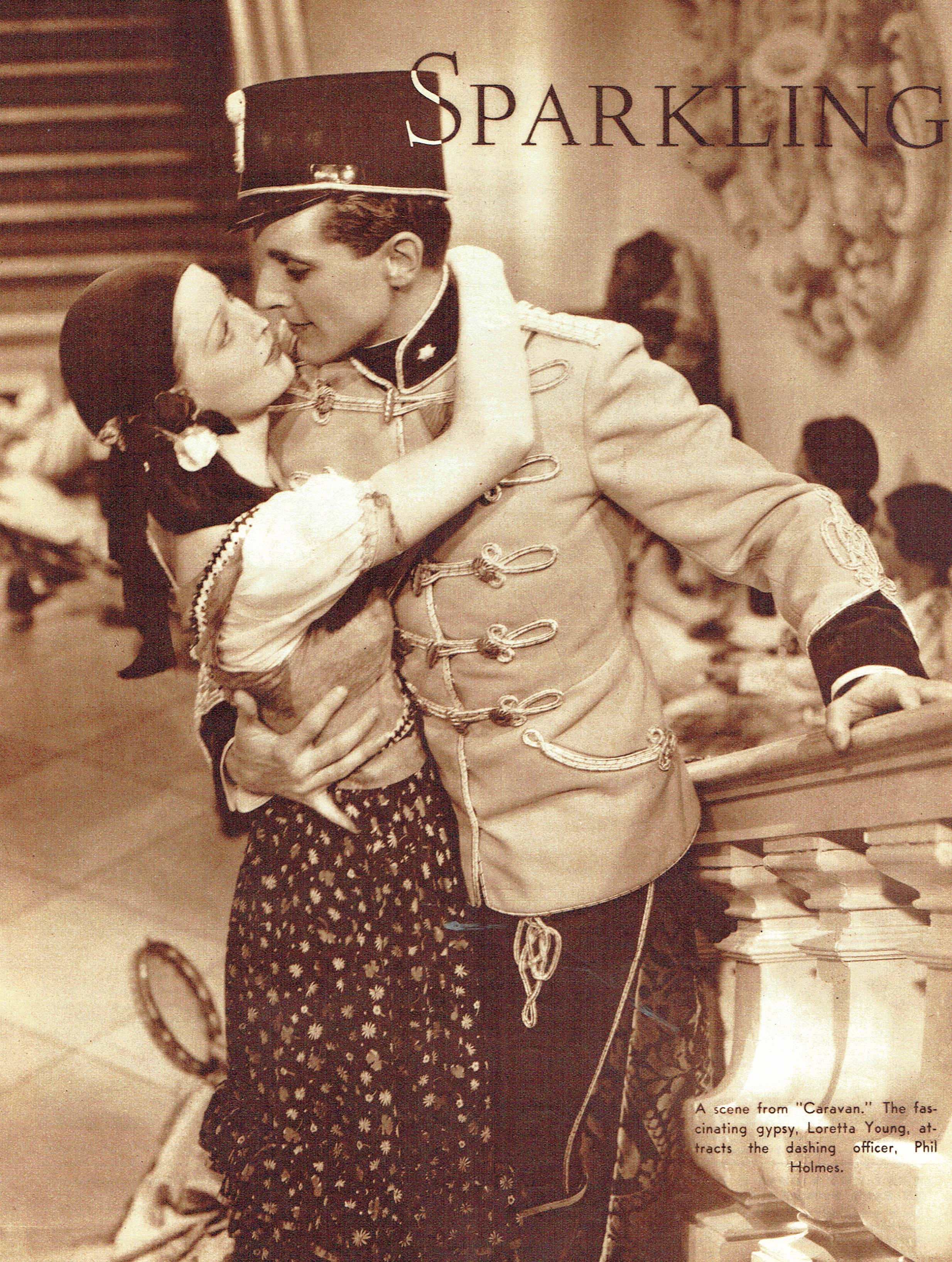 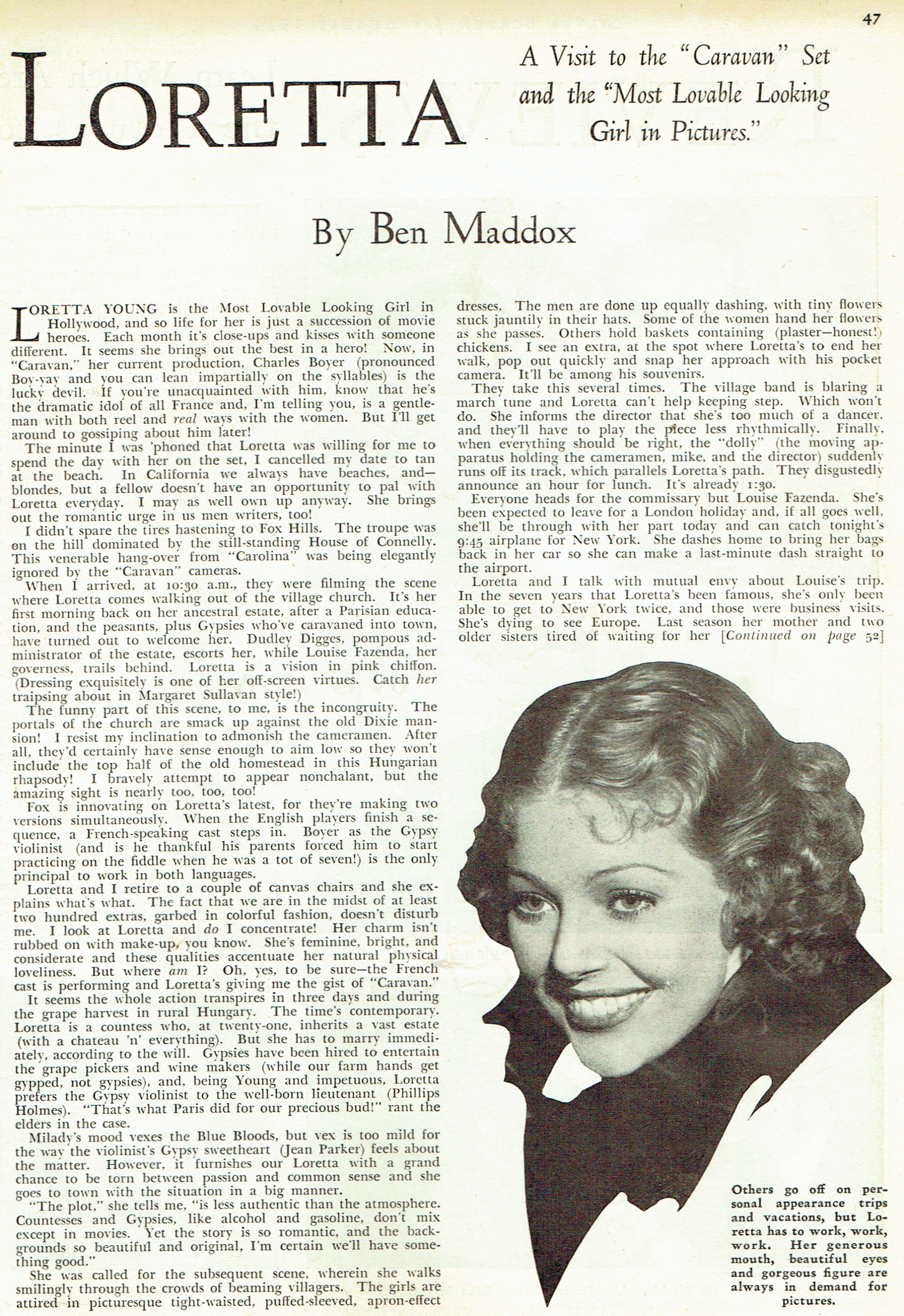 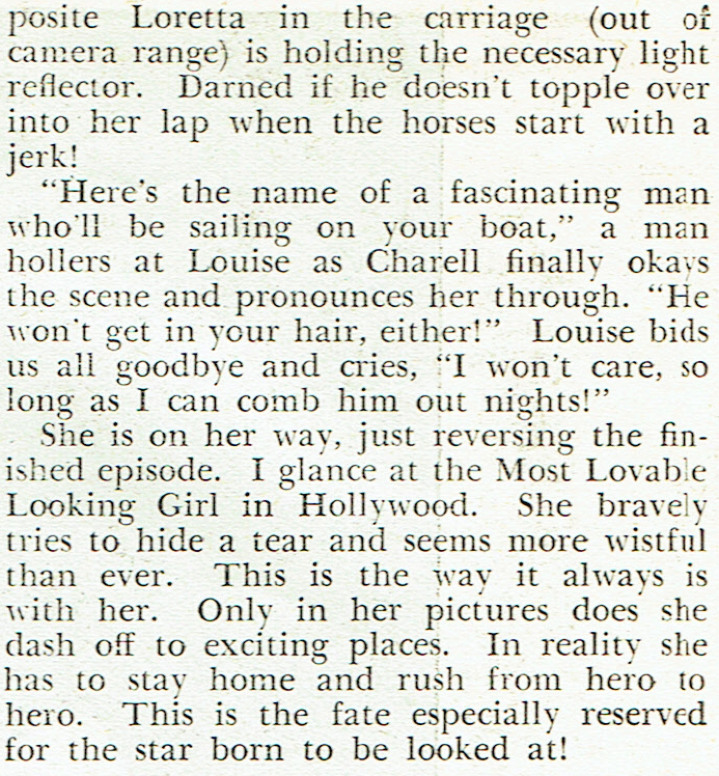 And "little sister" Georgiana mentioned above? She wound up not so little, topping out at about six feet and emphasizing modeling rather than acting until marrying Ricardo Montalban.

In a recent entry regarding a Silver Screen issue, I saw a reference to an "Ernest Lubitsch" and assumed it merely was a copy editor's mistake, but I now guess I was wrong. Instead, it appears "Ernest" was this magazine's equivalent of Picture Play's incessant description of Lombard as "Carol" as late as the start of 1937 (it's even part of the headline, although "Ernst" pops in to open a later paragraph). Forget the affectation and read the story, where the acclaimed director tries to define what makes a star a star: 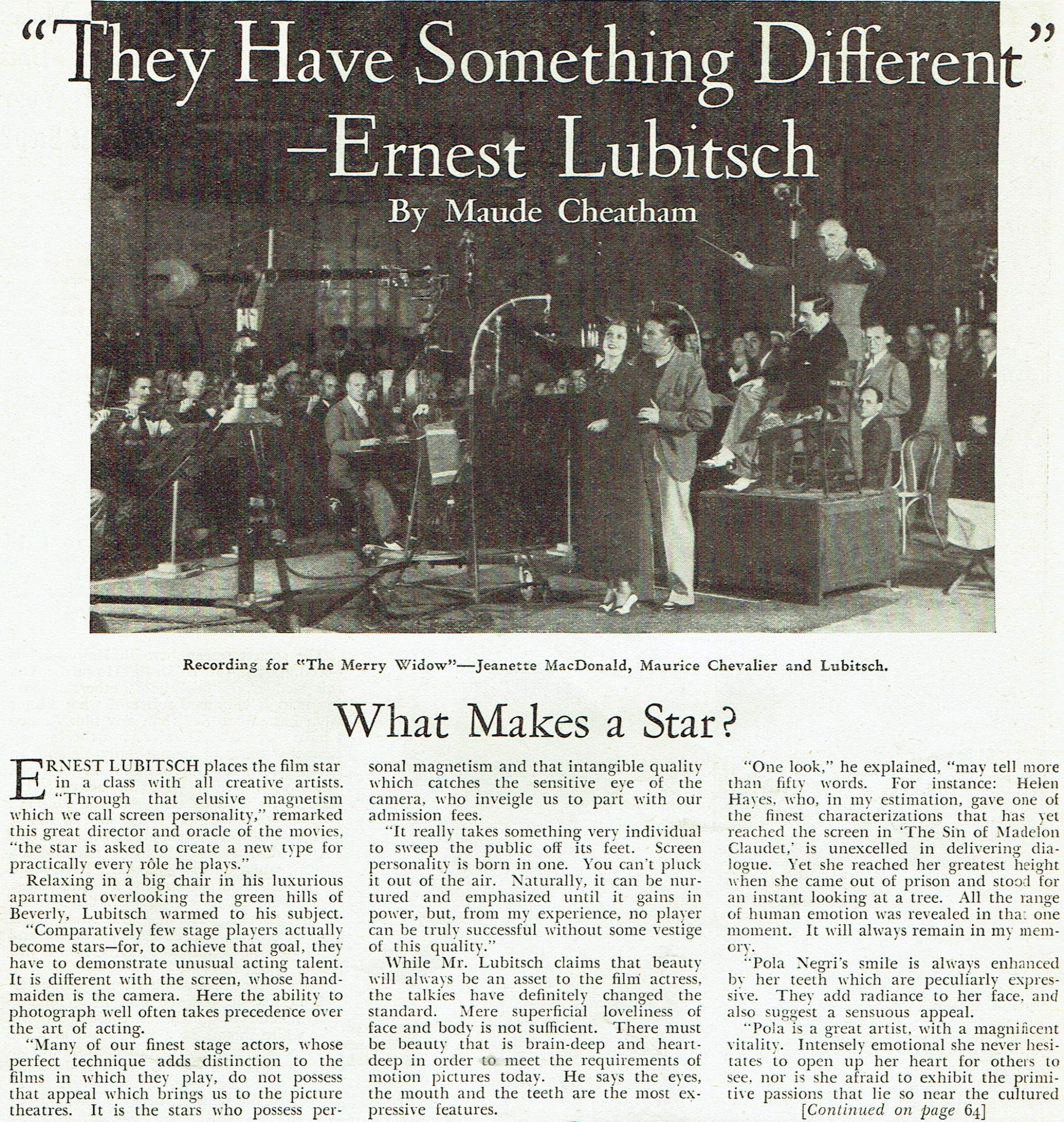 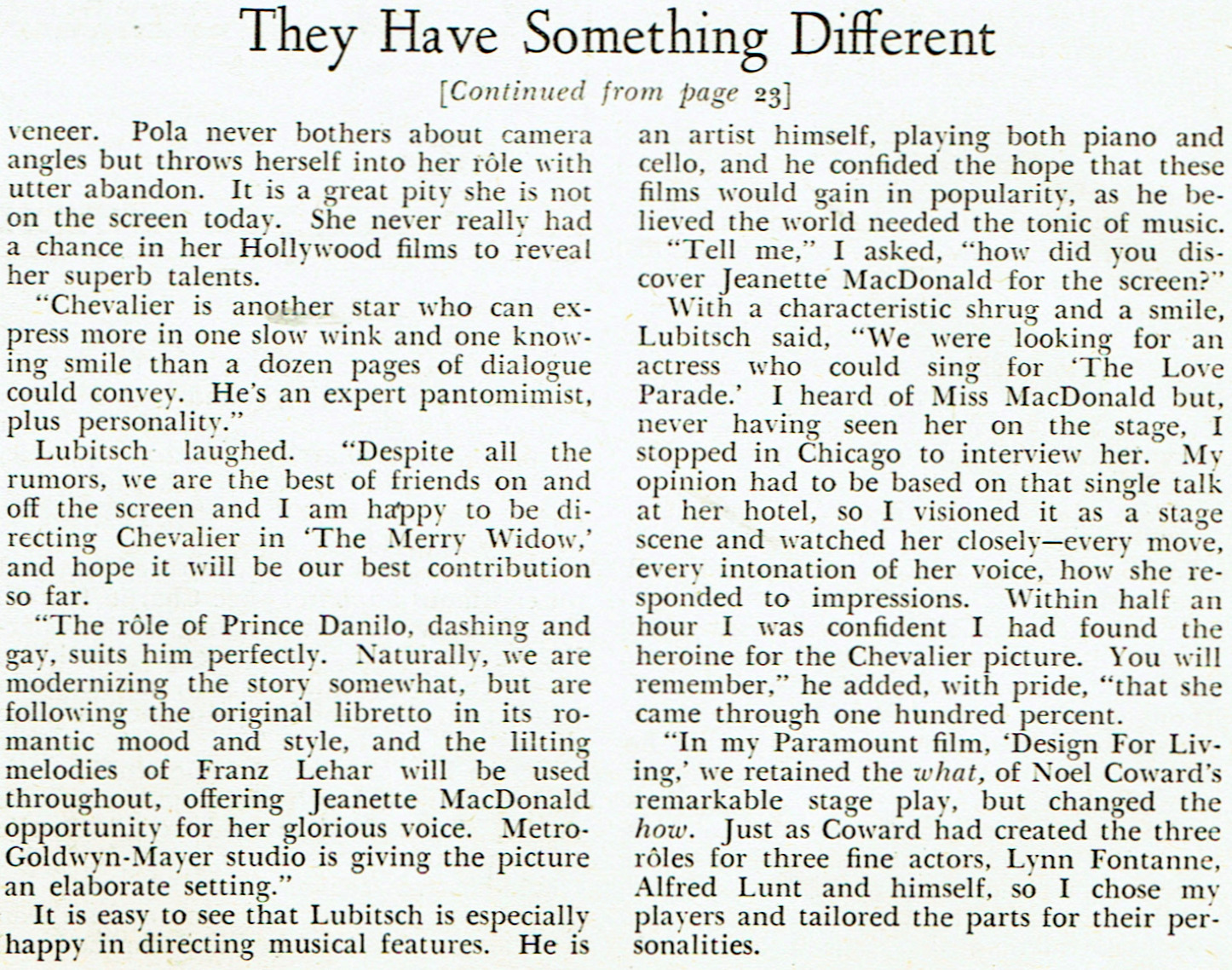 The issue has some lovely fashion shots, too. Here's Myrna Loy modeling for a Clarence Sinclair Bull portrait: 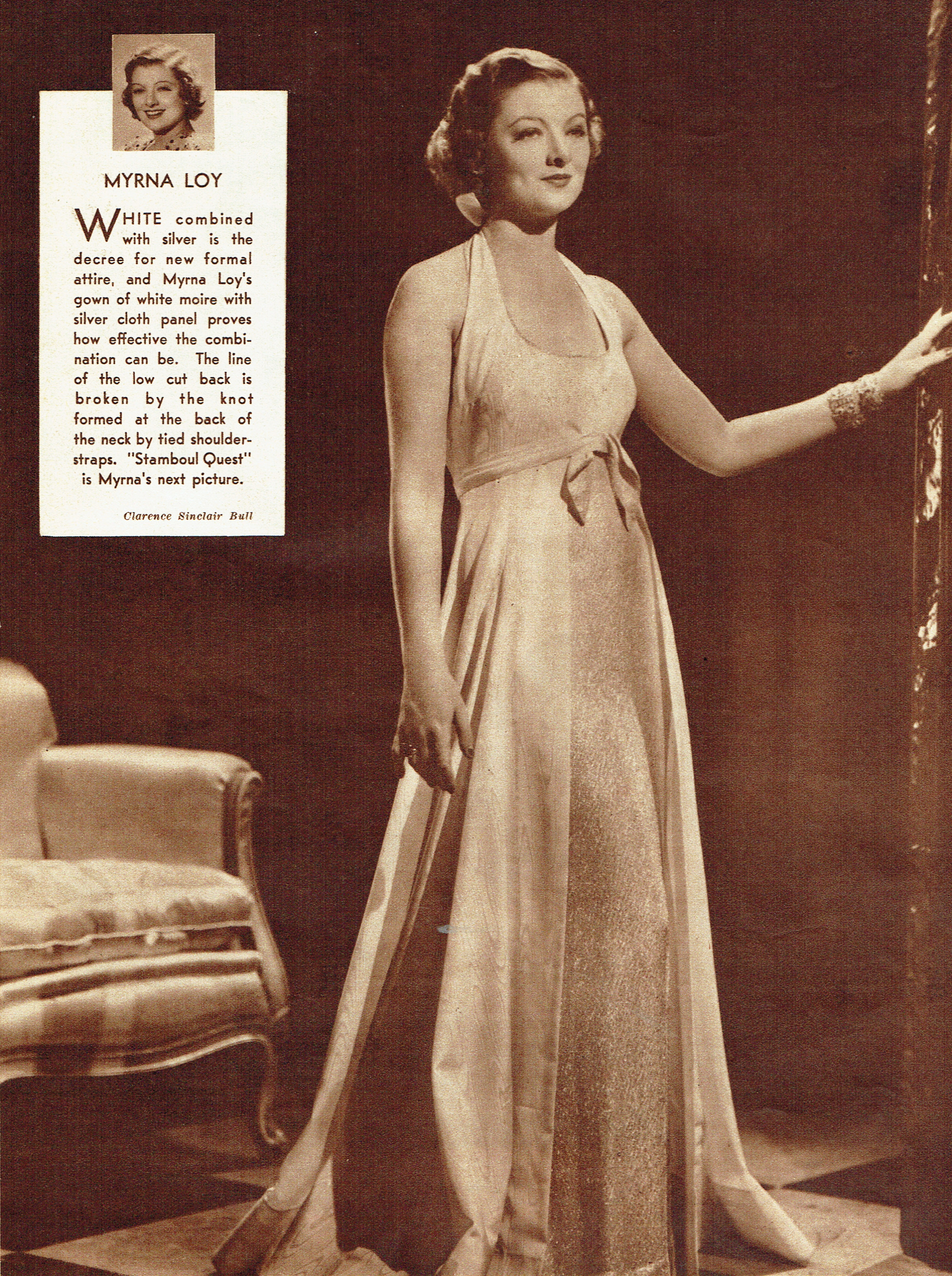 And George Hurrell works his photographic magic on one of his favorite subjects, Joan Crawford: 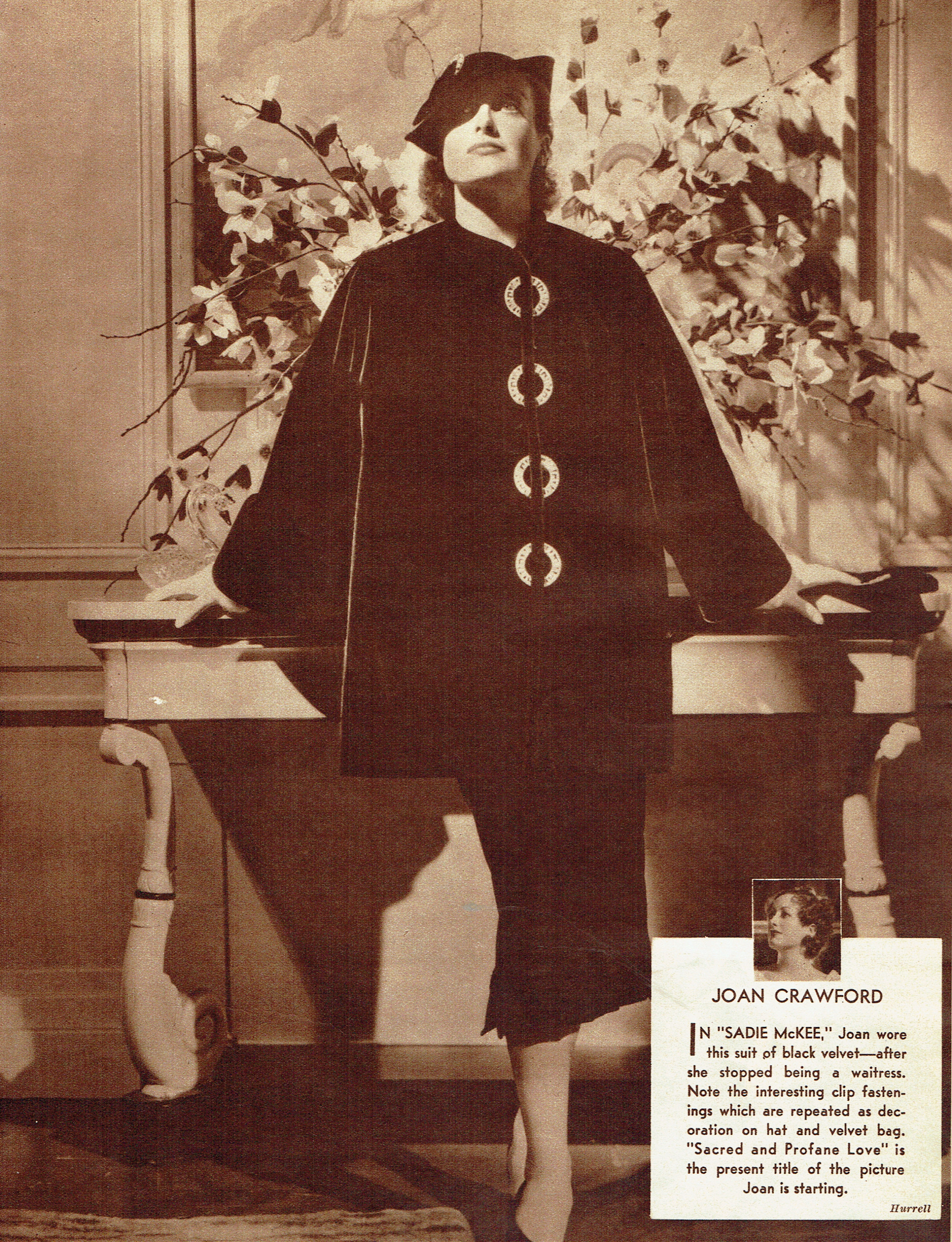 Like several films at about the time the Code was tightened in mid-1934, "Sacred And Profane Love" had its title changed, to the safer "Chained."

Finally, let's look at a few of the ads in this issue. Lux popped up frequently in fan mags, and here, the spokeswoman for the soap is none other than the lovely Joan Blondell: 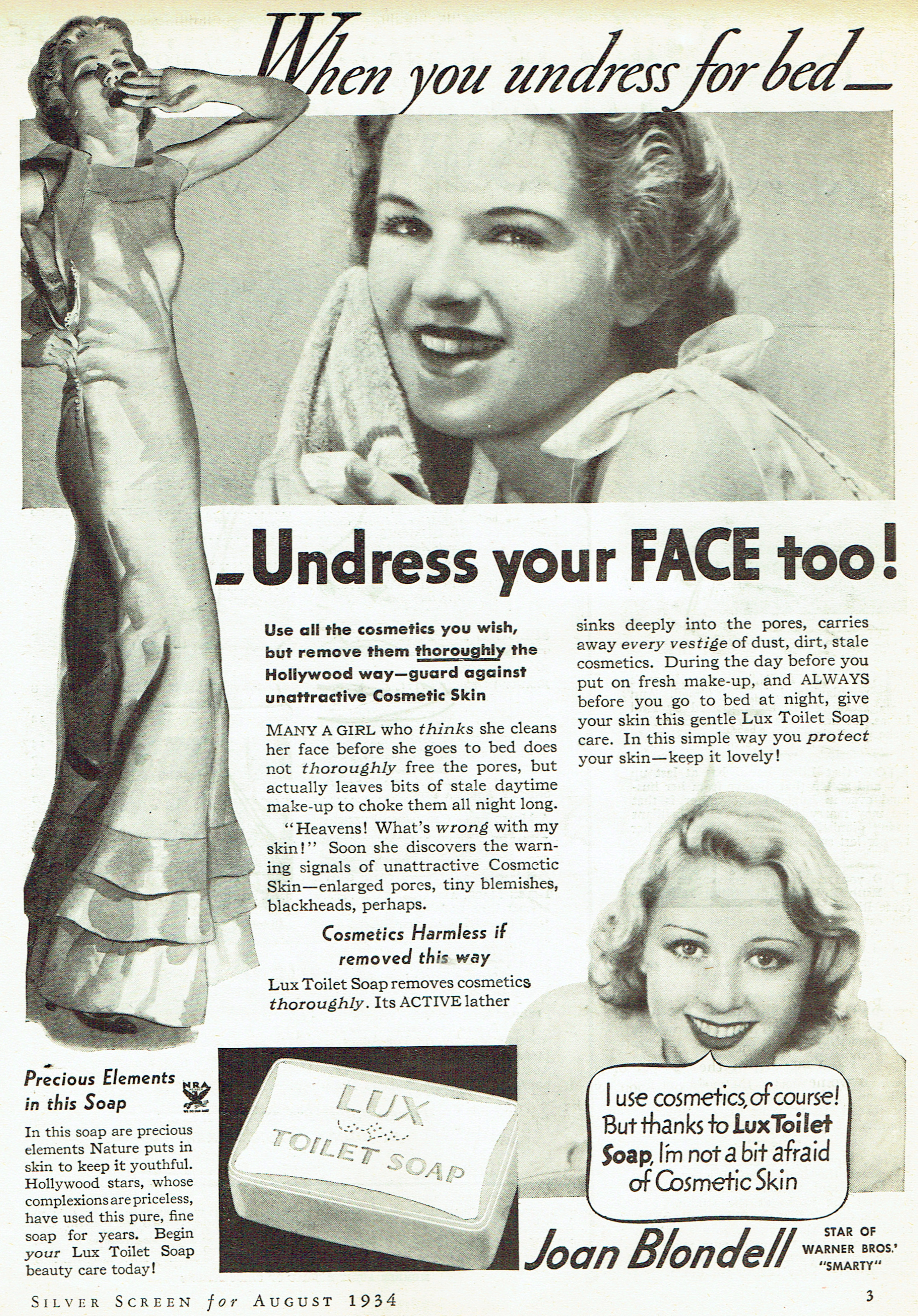 Paramount pulled out all the stops for "The Scarlet Empress," the latest Dietrich vehicle, going so far as to shell out a few bucks for spot color (scarlet, of course): 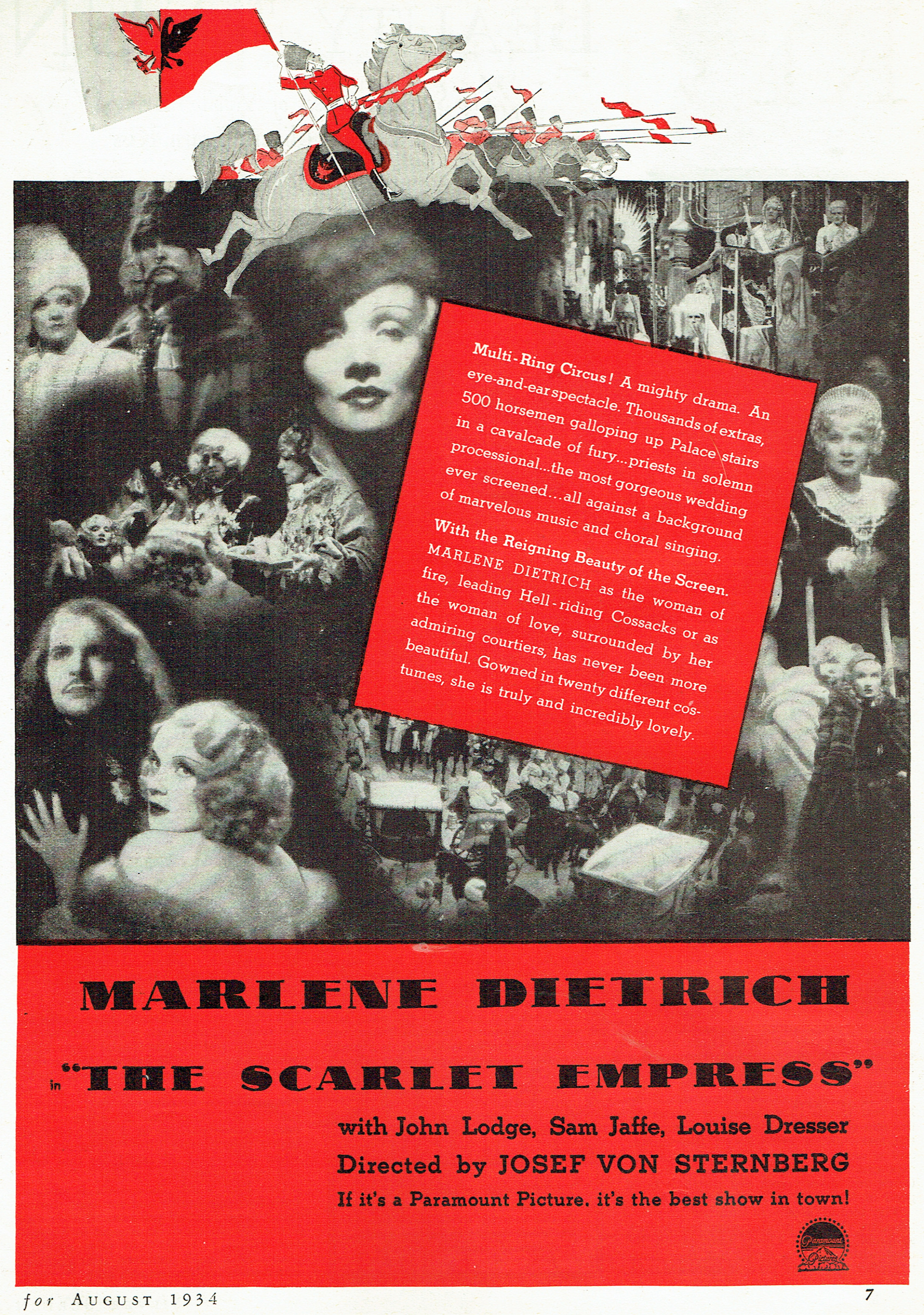 And Darryl F. Zanuck's 20th Century studio, a year away from consolidating with Fox, publicized "Bulldog Drummond Strikes Back," with Ronald Colman and Loretta, a frequent Zanuck leading lady: 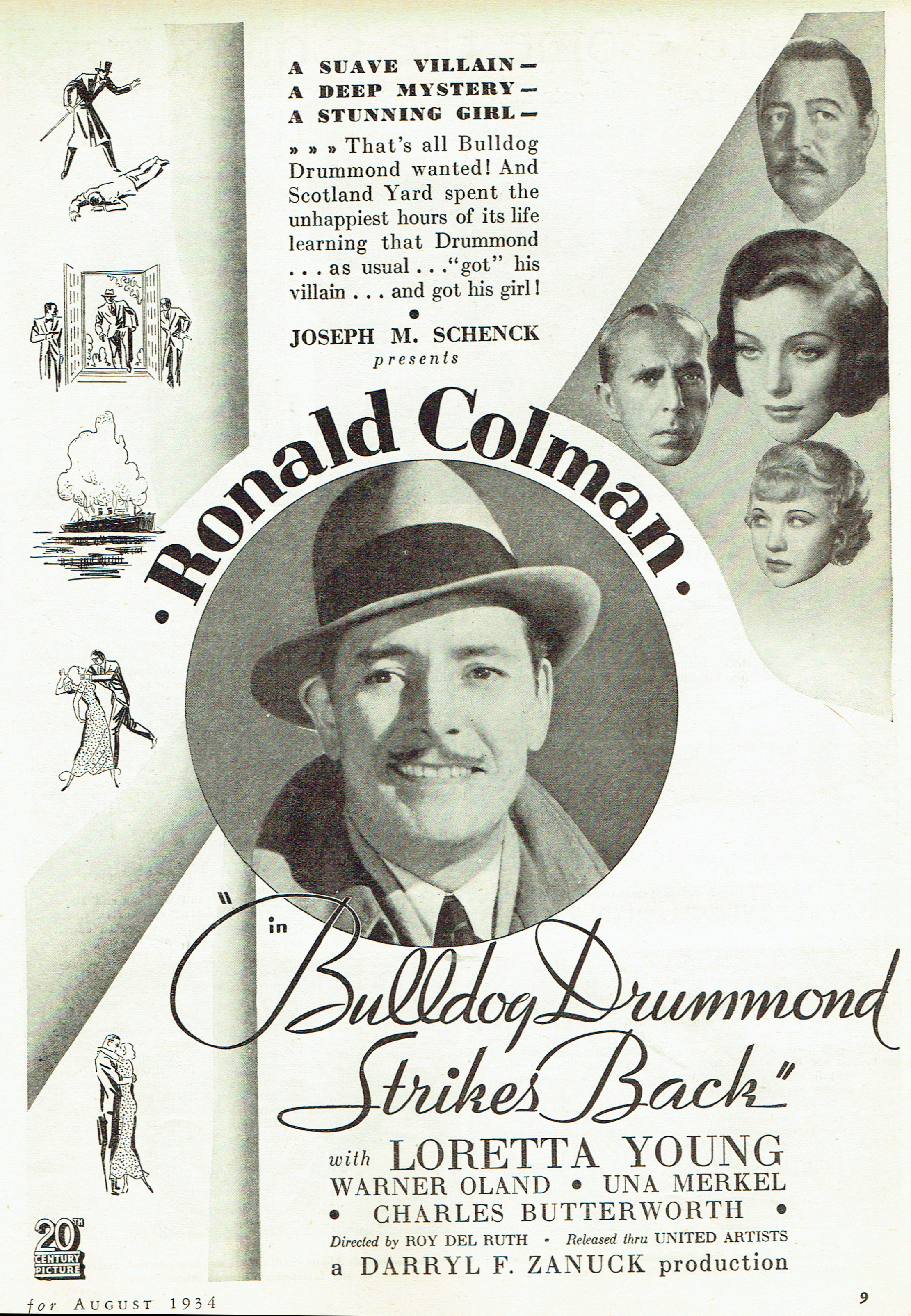