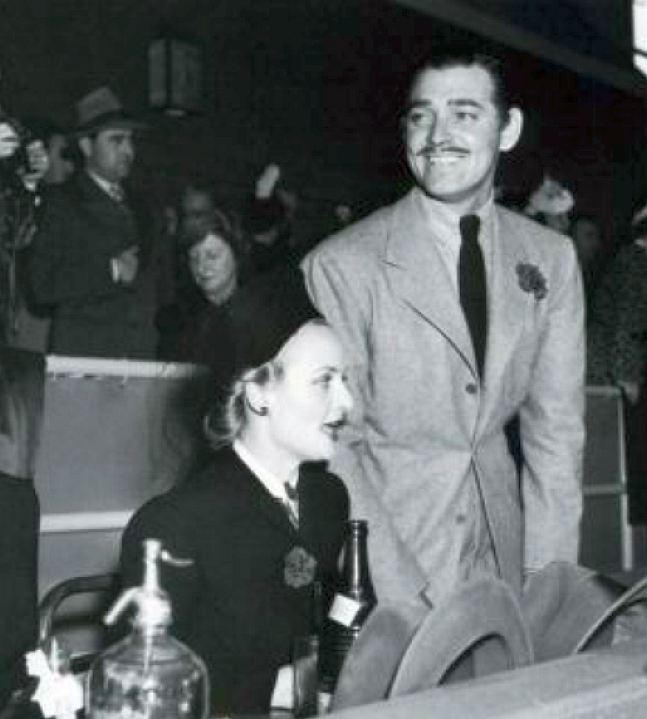 The photo above shows Carole Lombard and Clark Gable at the racetrack in 1940; Clark looks as if he just picked a winner and is getting ready to cash in his ticket, though I'm not sure what Carole's reaction is. But the track isn't Santa Anita, where the Gables were frequently seen, but another southern California venue...one that is closing this Sunday after 75 years. 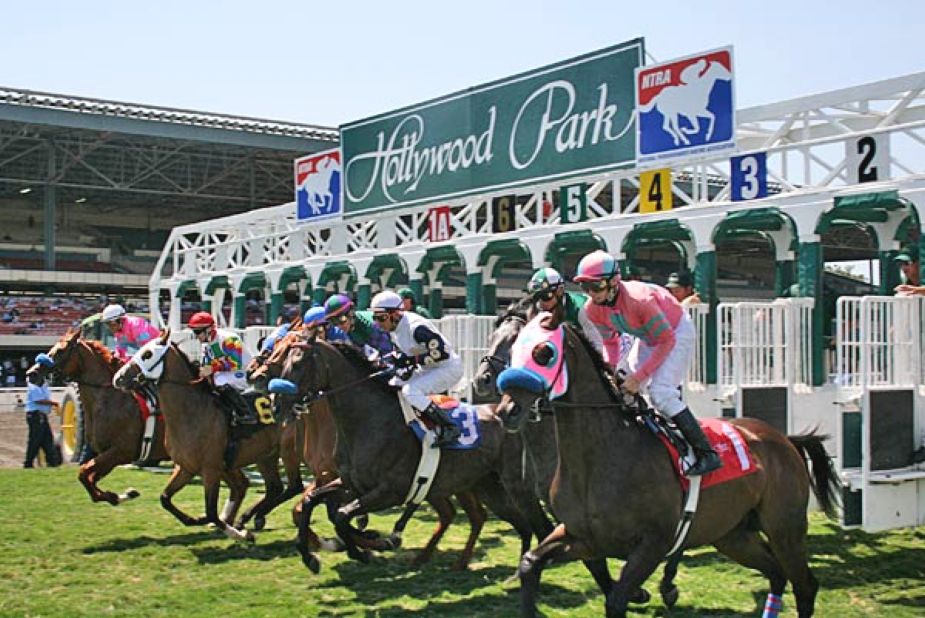 It's Hollywood Park (now technically Betfair Hollywood Park) in the southern suburb of Inglewood, which opened in June 1938 with strong bloodlines, both equine and human. According to its website, its founding shareholders included Al Jolson and Raoul Walsh (two of the original directors of the board), Joan Blondell, Ronald Colman, Walt Disney, Bing Crosby, Sam Goldwyn, Darryl Zanuck, George Jessel, Ralph Bellamy, Hal Wallis, Anatole Litvak, Hunt Stromberg, Wallace Beery and Irene Dunne. Lombard's director in "Fools For Scandal" (don't hold that against him), Mervyn LeRoy, was the park's director from 1941 until his death in 1986.

Other celebrities were park patrons, too, such as Don Ameche, Hedy Lamarr and James Stewart, shown in 1940: 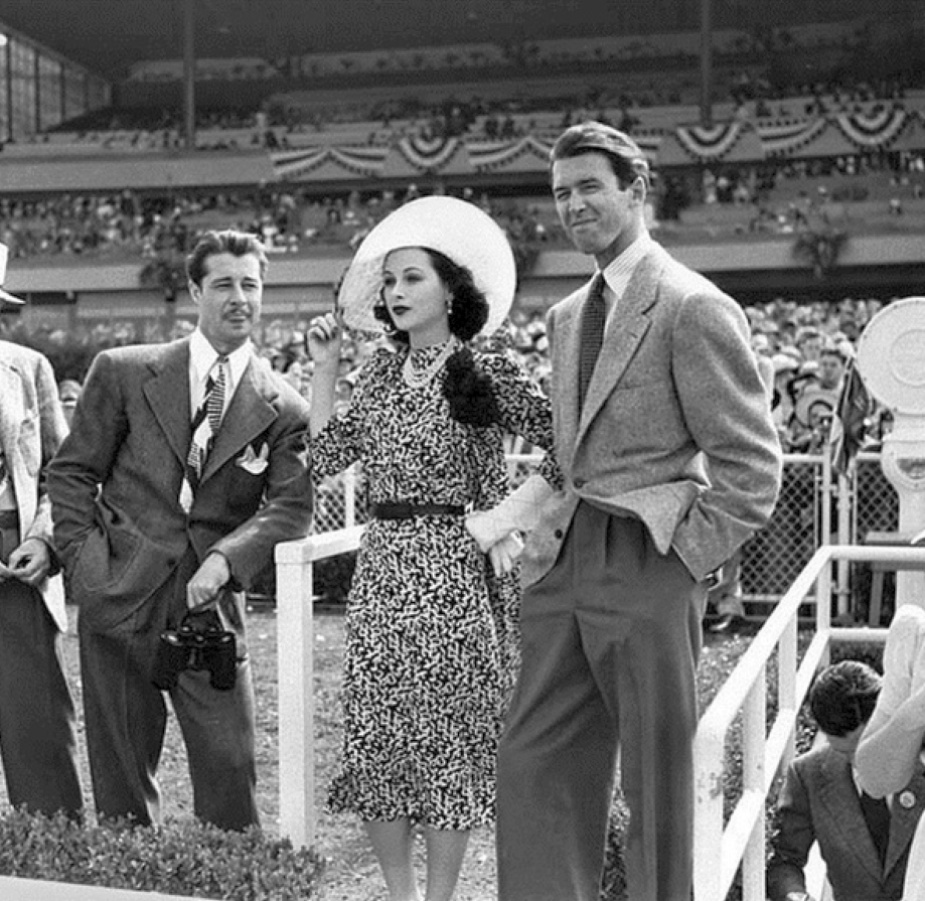 Seabiscuit won the track's inaugural signature race, the Hollywood Gold Cup, in 1938; later notable winners included former Triple Crown champions Citation (1951) and Affirmed (1979). There was a fire in 1949 which forced that season's meet to Santa Anita, but it was back to Inglewood the following year, and it drew big crowds on the Los Angeles Railway's fabled "yellow cars": 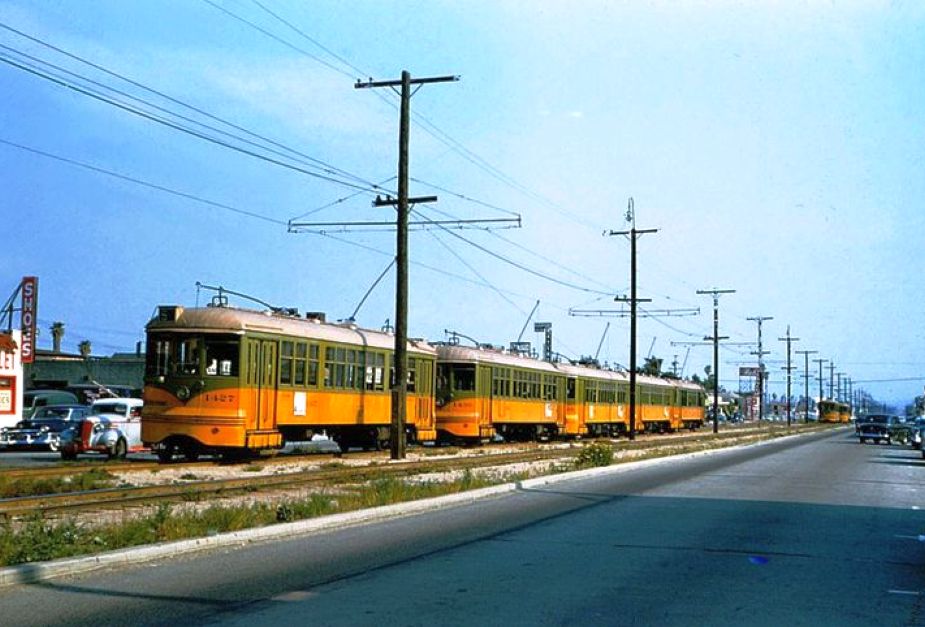 While Hollywood Park never quite had the panache of Santa Anita (it was to that Arcadia track what Aqueduct was to Belmont Park in New York), the venue was quite popular in its heyday. In 1965, the park averaged 35,000 fans daily, and a tote bag promotion in 1980 drew more than 80,000. Three Breeders Cup cards were held at Hollywood Park: the inaugural run in 1984, followed by visits in 1987 and 1997.

But the growth of off-track betting, combined with a decrease of interest from the public, turned horse racing into a niche sport. In recent years, the average attendance was less than one-tenth what it was at its peak.

With the writing on the wall, track officials decided this would be the final year for racing, with its dates shifted to Santa Anita next year. The land, near the Great Western Forum (former home of the NHL's Kings and NBA's Lakers, now being converted into a concert venue), soon will host a 300-room hotel, 3,000 homes, a shopping mall and movie theaters. It should be a significant revenue boost for Inglewood, which has struggled in recent years, but it's the end for yet another link to the southern California that Clark and Carole knew and loved.

For more on the end of this fabled track, and some profiles of its habitues (many of whom Damon Runyon would have admired), check out http://www.nytimes.com/2013/12/15/sports/a-last-hurrah-for-hollywood-park.html?_r=0. And here's a three-minute video tribute to Hollywood Park:

Carole wishes all a merry Christmas and happy New Year -- in Hungarian! -- in this image from 1930, our latest Lombard LiveJournal header. Pass the paprika.
Collapse