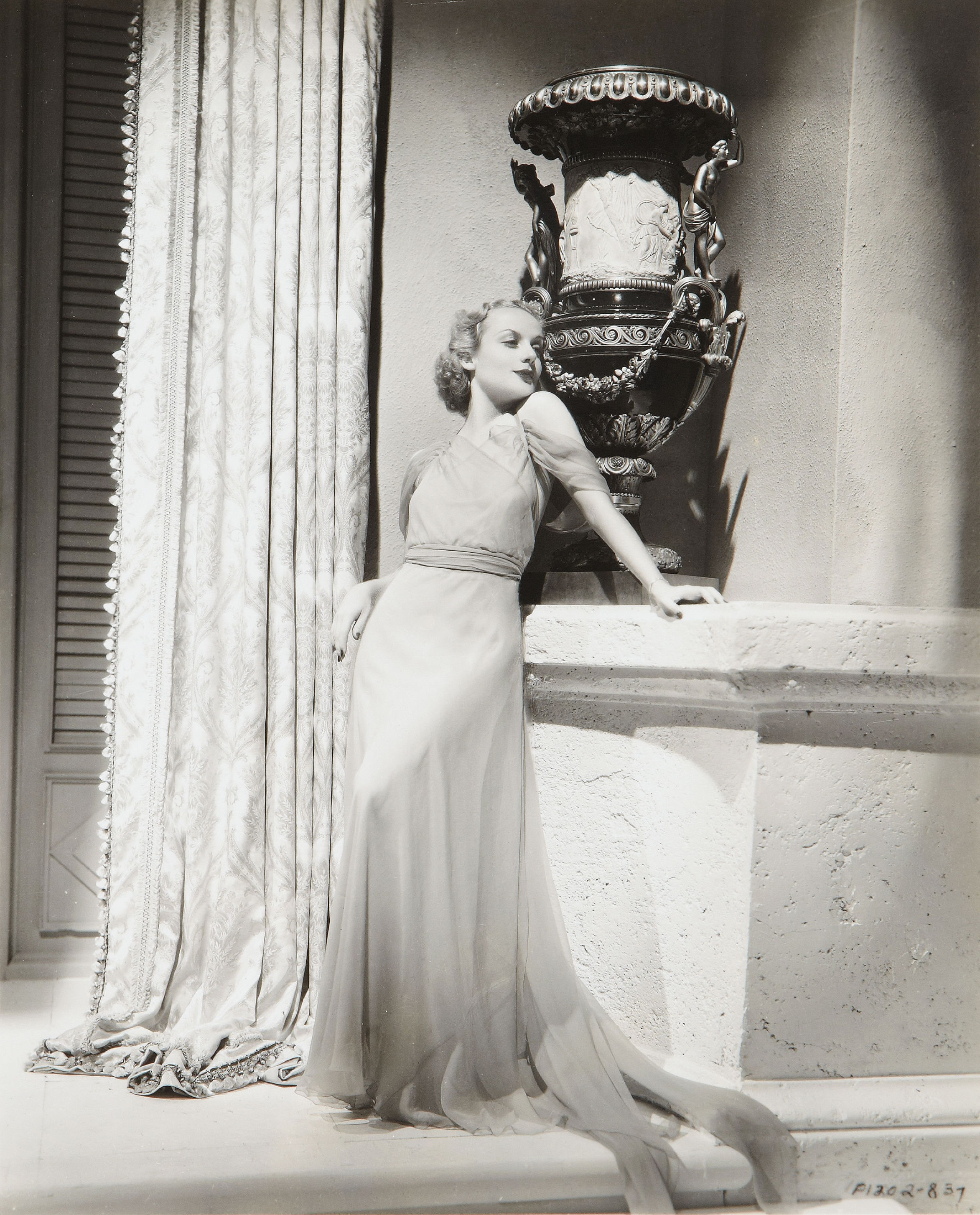 The early autumn of 1934 was a tumultuous time for Carole Lombard, but if your only exposure to her was via the Movie Classic issue from that October, you'd never have known it. Carole was grieving over the sudden, shockingly accidental death of Russ Columbo on Sept. 2, but there's a reason it wasn't part of that issue. Take a look at one of its back pages, specifically the lower right-hand corner: 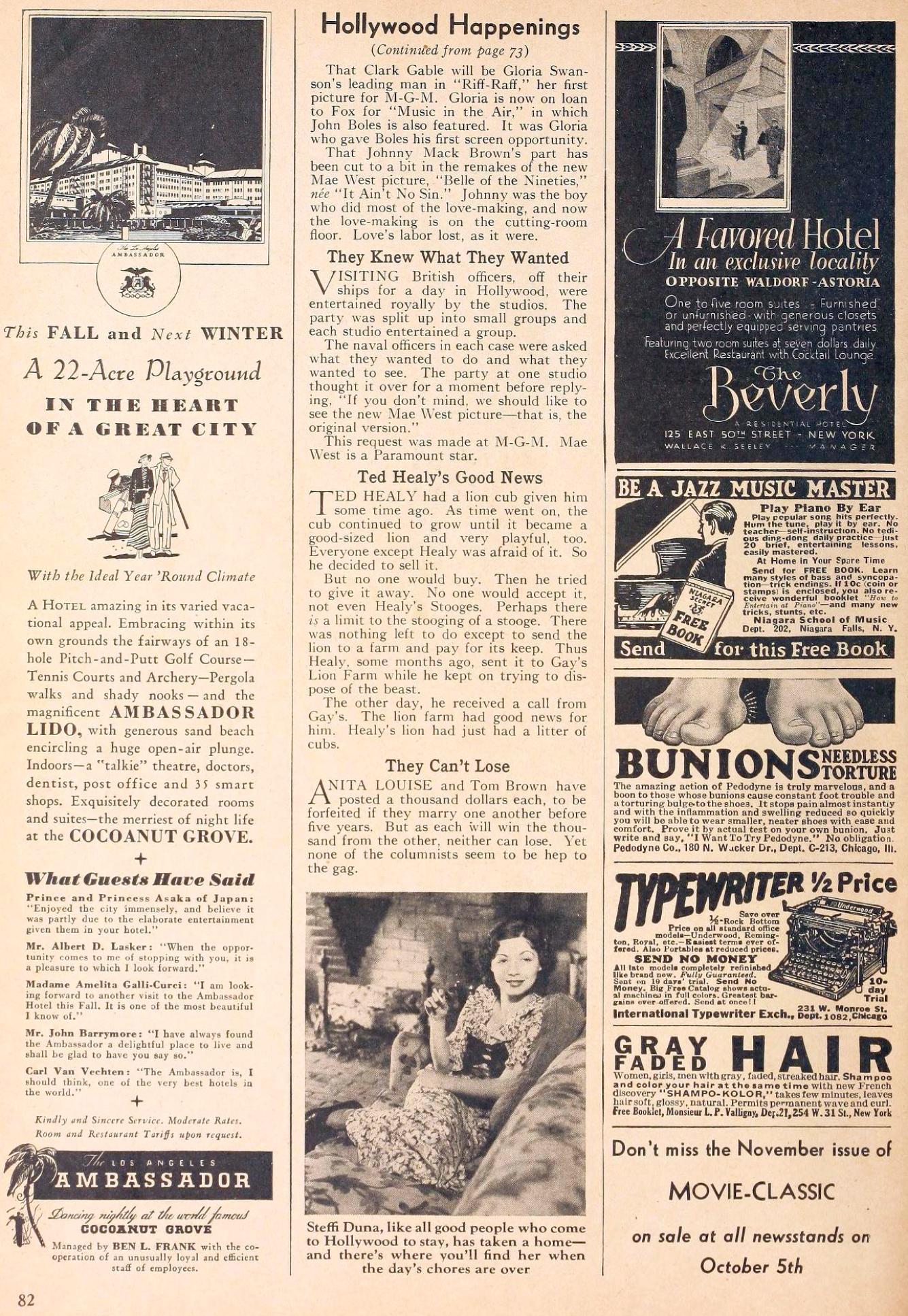 If the October issue hit newsstands similarly early in September, it had already gone to press by the time Columbo died (especially since it occurred over Labor Day weekend). Also note the ad in the first column from the Ambassador Hotel and the endorsement from one John Barrymore. If he and Lombard had an affair during the filming of "Twentieth Century," as many Hollywood historians believe, might some of the sexual hijinks have happened there, not far from where virginal teenager Carole had danced at the Cocoanut Grove nearly a decade before?

(Oh, and neither Clark Gable nor Gloria Swanson starred in "Riff-Raff" -- though it's delicious to imagine what that film might have been like with them as the leads.)

The issue was hardly bereft of Lombard material. She was featured in a full-page photo: 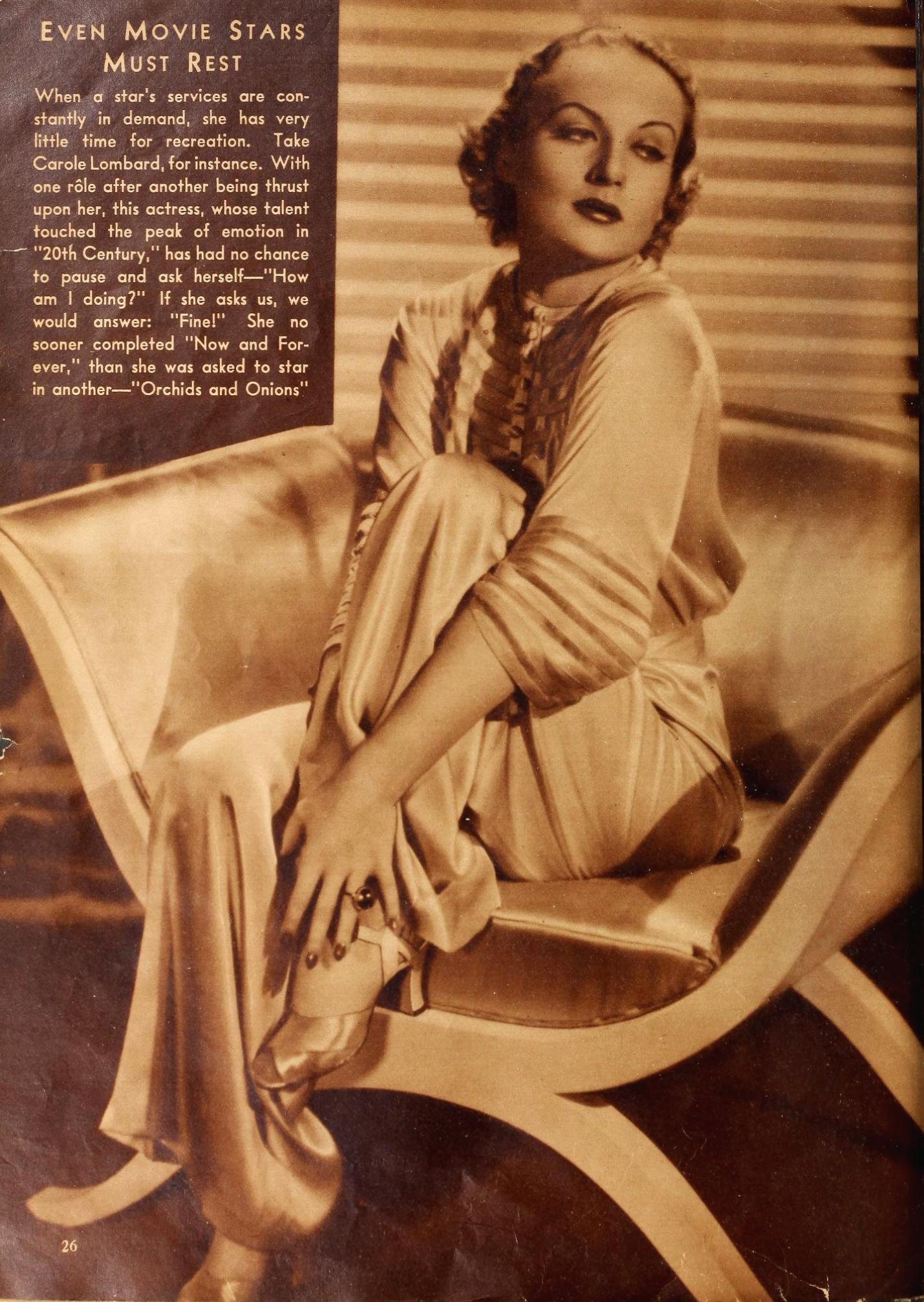 (As we all know, the one-time "orchid lady" never made a film entitled "Orchids And Onions.")

Carole was also seen with her latest leading man, Gary Cooper, in an ad from Max Factor: 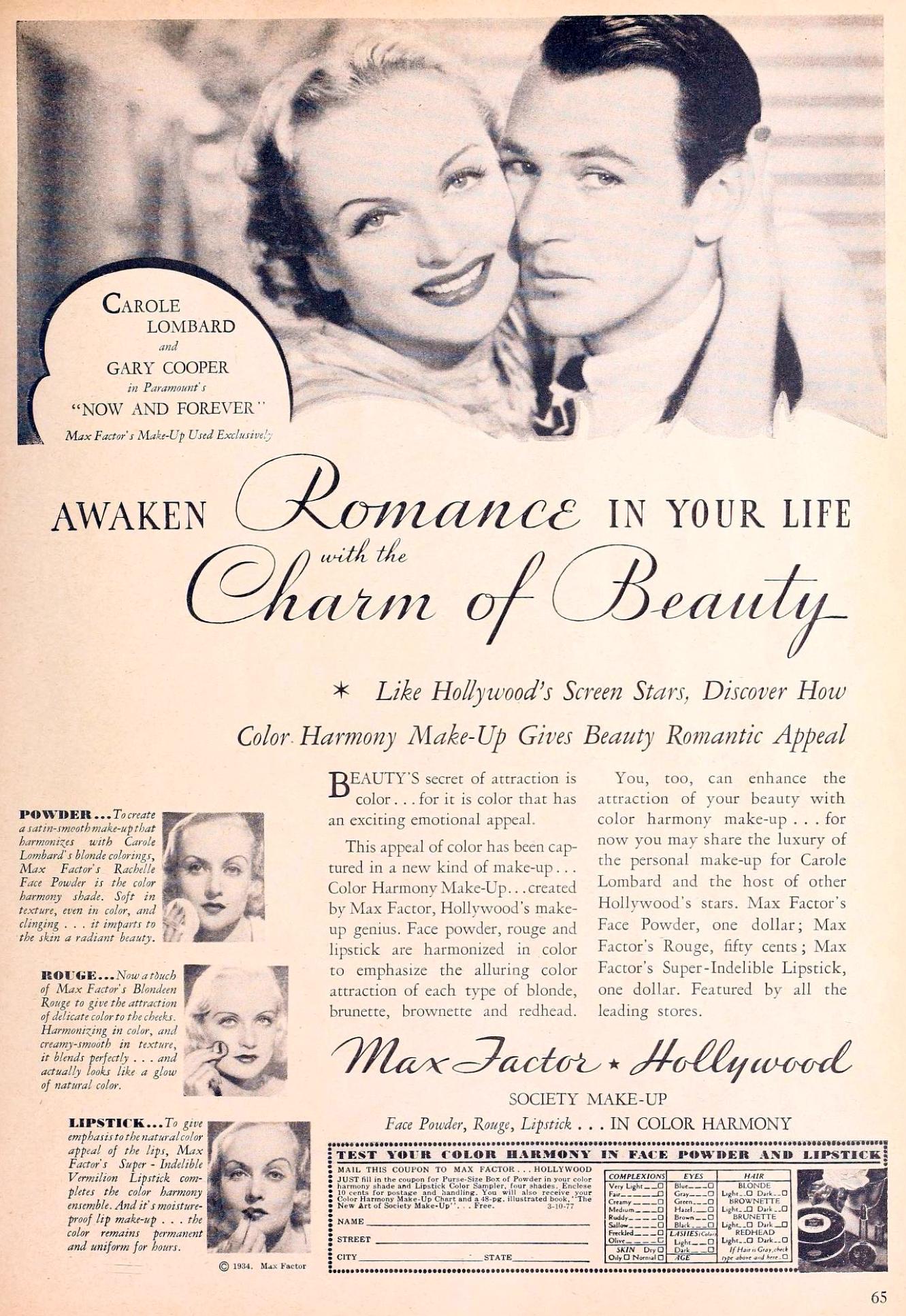 Lombard didn't make the cover, but another Oct. 6 baby did -- Janet Gaynor, painted by Marland Stone: 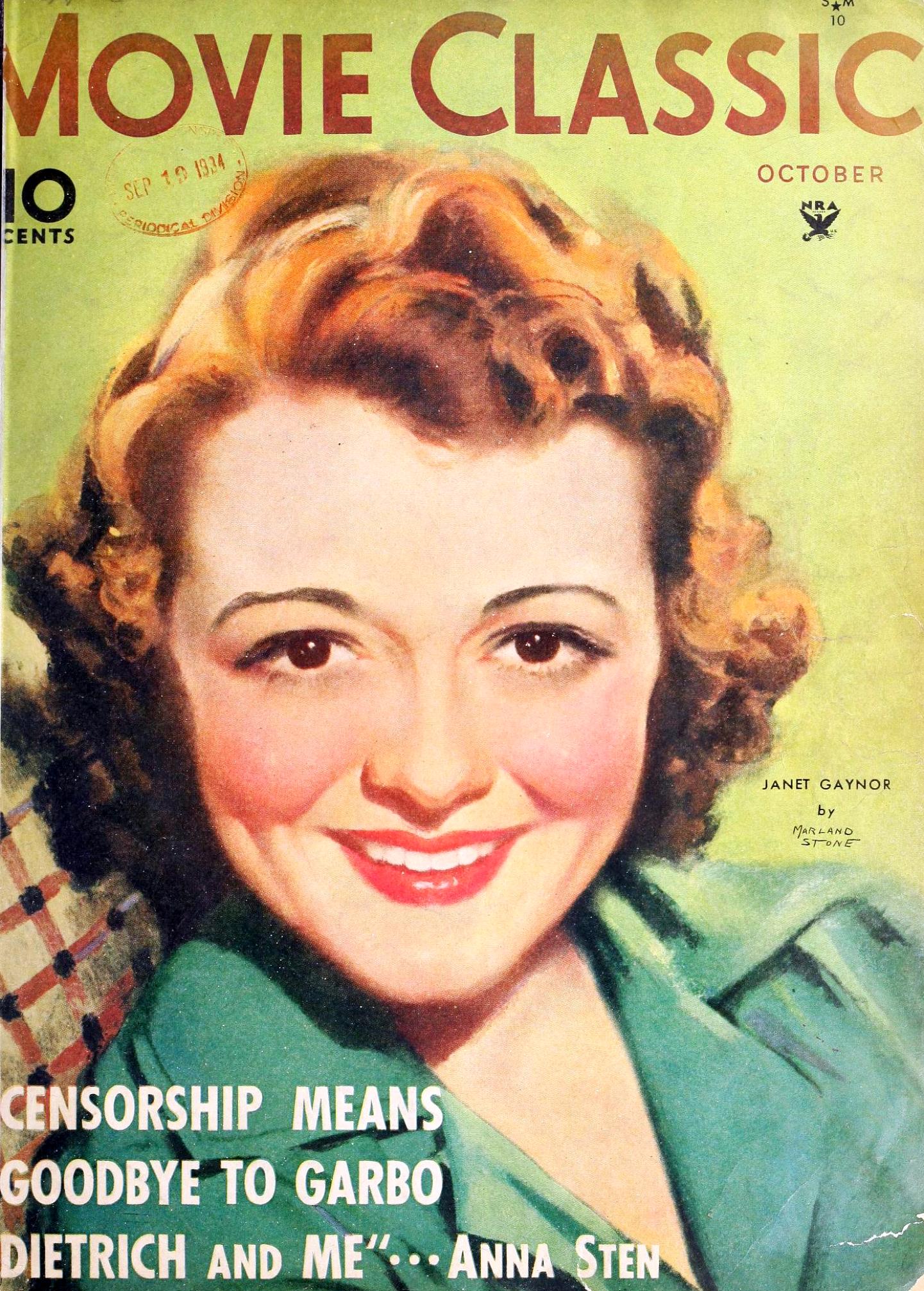 Let's focus on two stories from that issue. One is an "as told to" piece from James Cagney, where the gentlemanly actor expresses his disdain for much of the James Cagney persona. As you might expect from him, it's lively and fascinating, and shows why he was so popular with his fellow actors (if not the suits running Warners): 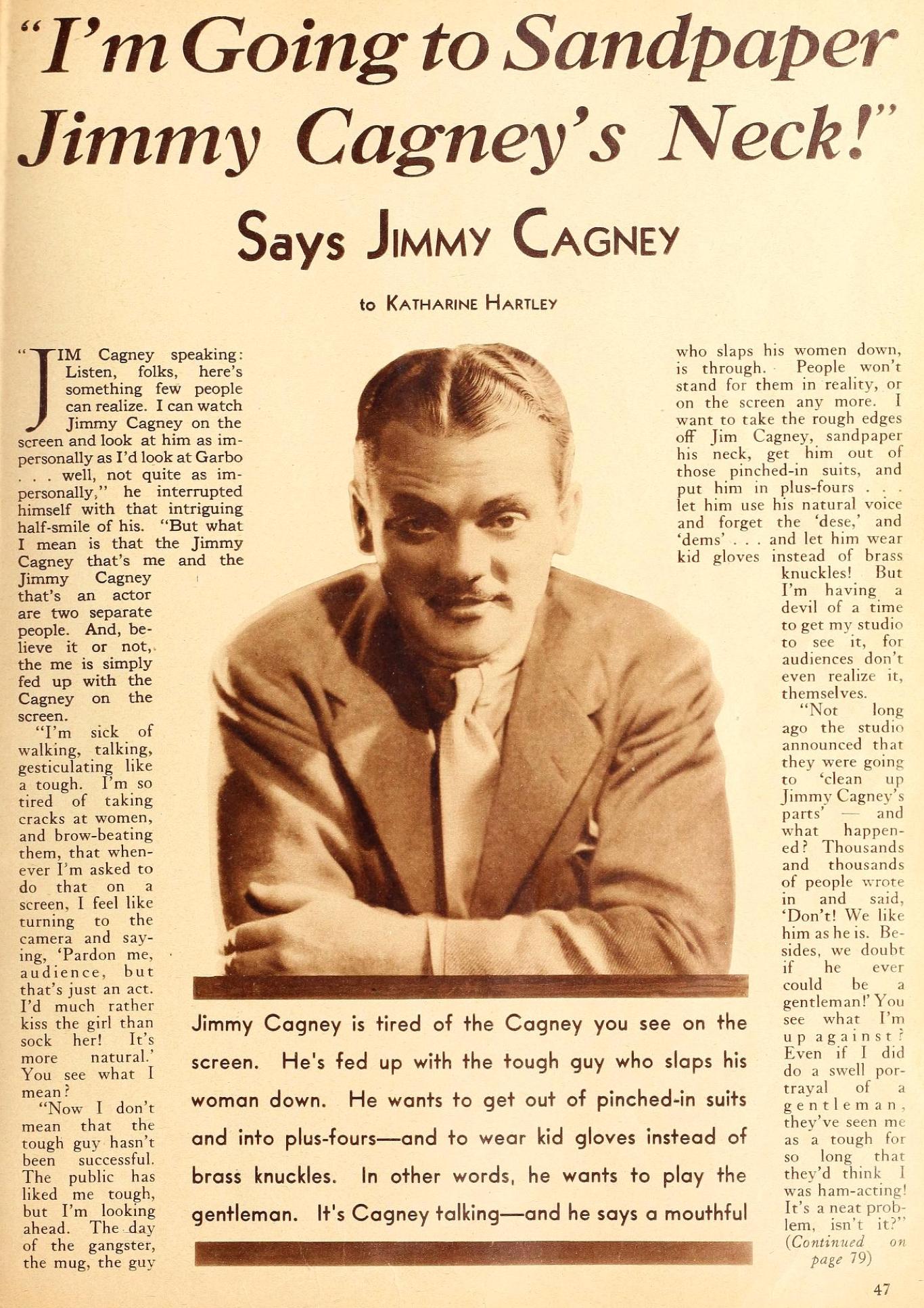 In contrast, check out this article, which alleges to tell the "real story" about Jean Harlow. However, her mother is the conduit, and based upon what we know about her, much of this has to be taken with a grain of salt. Heck, get an entire package of the stuff: 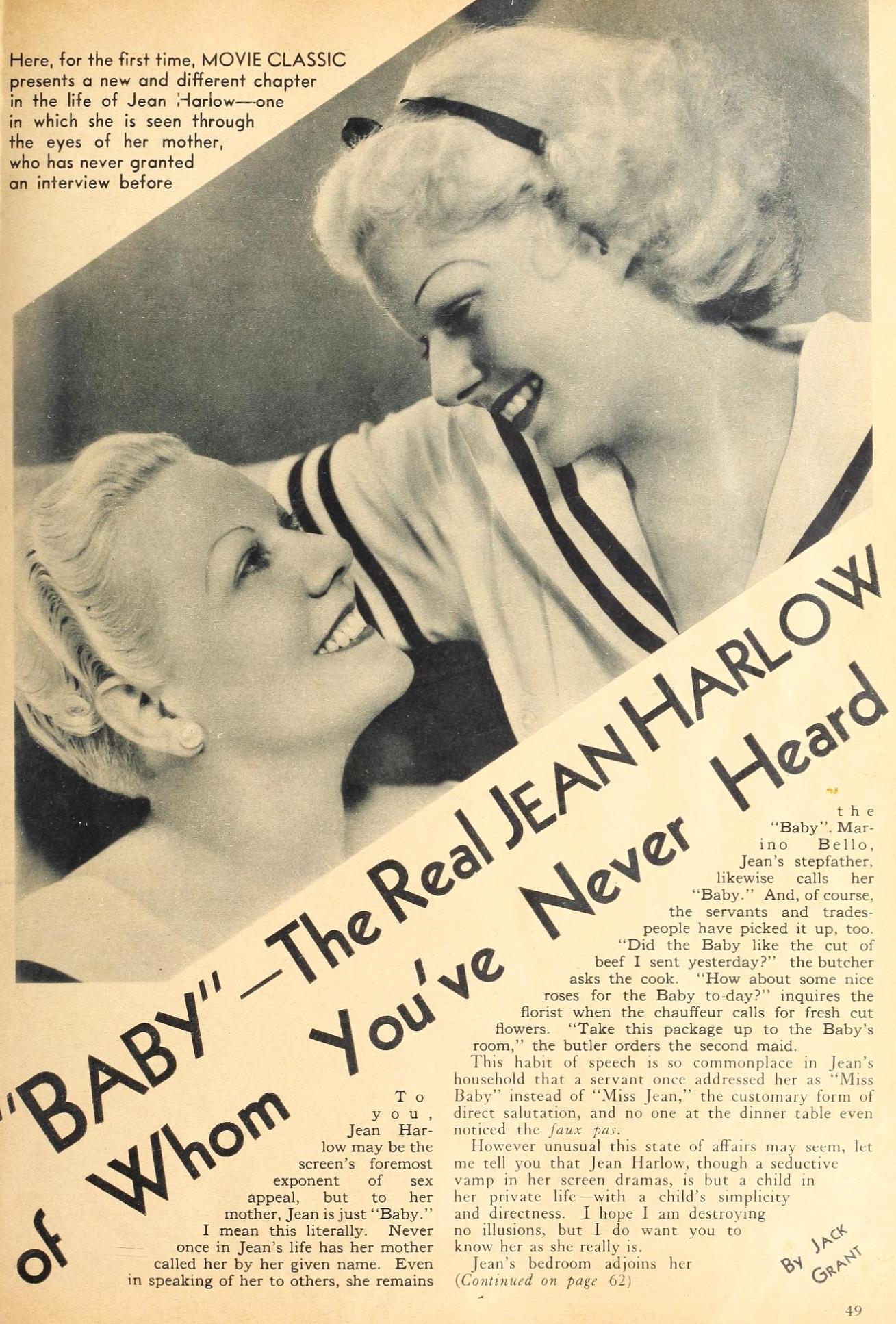 I'm certain Harlow maven Darrell Rooney could point out all the inaccuracies and things that don't ring true in this story.

A few years ago, we ran an entry regarding the legendary, long-gone Palomar Ballroom in Los Angeles, where musical history took place in August 1935 when Benny Goodman's orchestra performed there...an engagement many label the beginning of the "swing era" (http://carole-and-co.livejournal.com/484127.html). Thankfully, someone has uncovered a radio broadcast of Goodman and crew from the Palomar on Aug. 22, 1935, the second night of their stand there, and made it available for all. It lasts about 25 minutes, opening with "Goodbye" (which Goodman later made his closing song, befitting its title) and also featuring "Darktown Strutters Ball," "Stardust" (which owes a lot to Louis Armstrong's popular version) and two of the year's most popular songs -- "East Of The Sun, West Of The Moon" and "I'm In The Mood For Love." To modern ears, there's nothing all that revolutionary about it, and Goodman may have felt likewise; the band was simply using the Fletcher Henderson arrangements from its Saturday night "Let's Dance" radio program which originated back east earlier in the year. But West Coast audiences heard it at an earlier time than their eastern counterparts, and it made much more of an impact in the Pacific time zone. The overwhelmingly positive reaction resonated throughout the rest of the country, boosting Benny's band to unparalleled popularity. Here it is, some 78 years later, for your enjoyment.

One final note: Funeral services are being held for my mother this week (visitation Wednesday, Mass and burial Thursday), so I may miss a day or two of entries for the first time in more than seven months. Keep her in your thoughts, and I will return to this site soon.

The next few Lombard LiveJournal headers will have a holiday theme, and we begin with this one from 1927 at the Mack Sennett studio. Carole, a newcomer to Sennett, is at right, with Ruth Hiatt at center in the Santa suit. (Can anyone identify the lady at left?)
Collapse