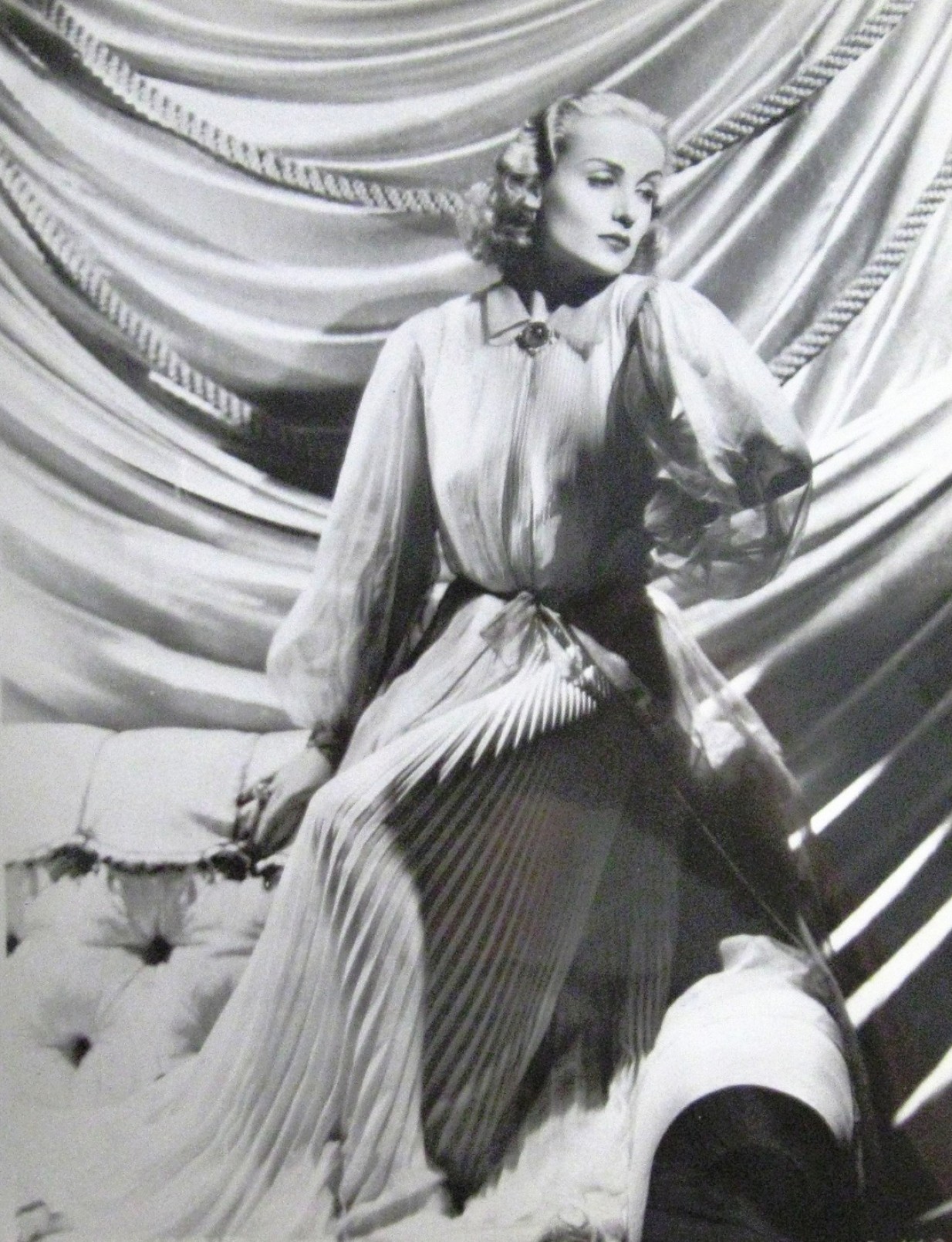 You'd never know it from that serious pose, but Carole Lombard had every right to be excited as 1939 began. After all, she knew she'd soon start a highly-publicized endeavor with a certain C.G. No, not that one... 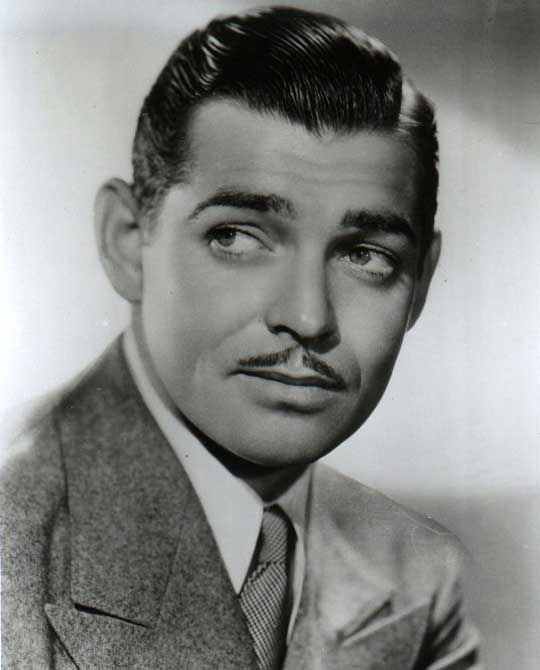 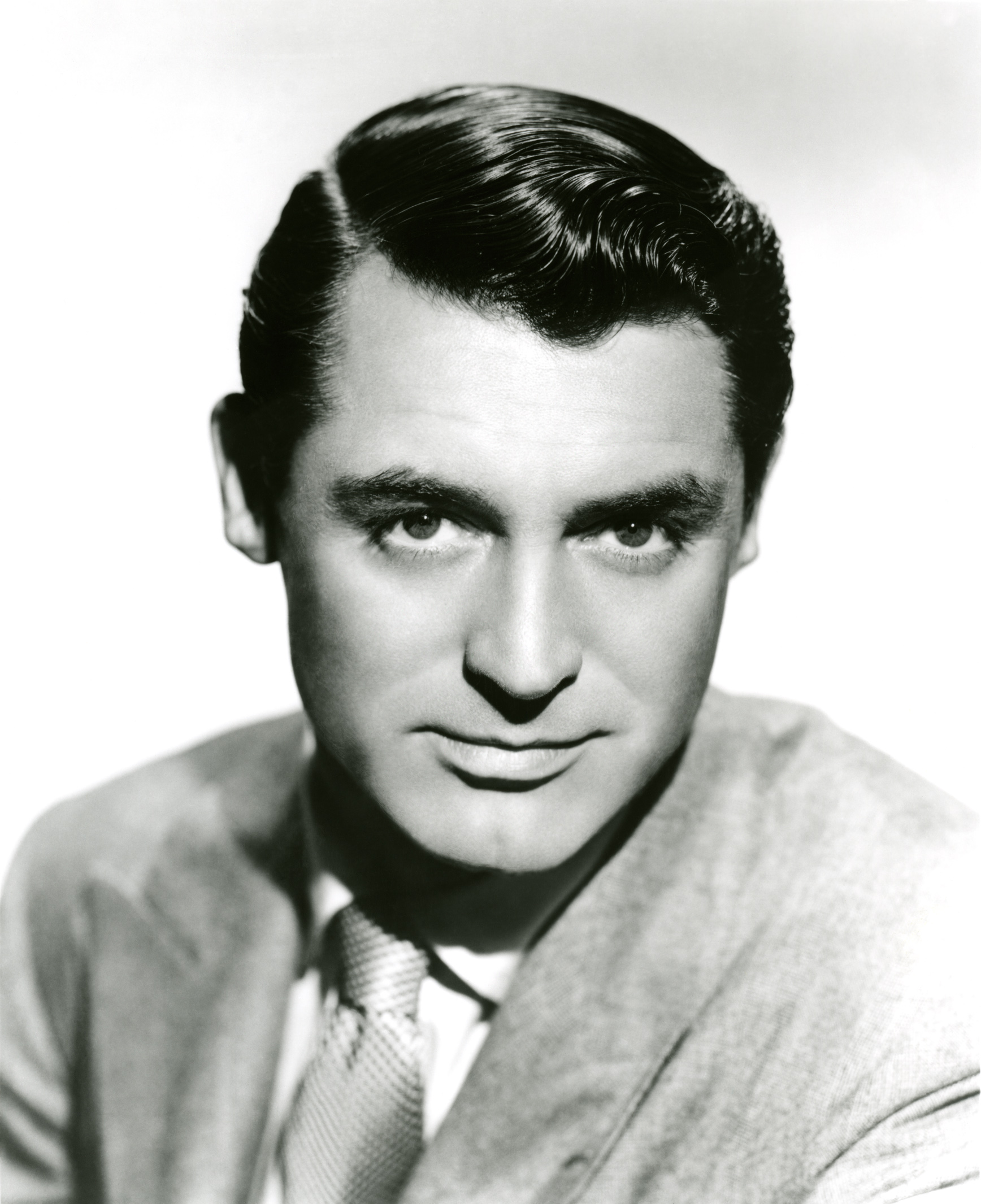 Here, let the snipe on the back of Carole's photo explain it all for you: 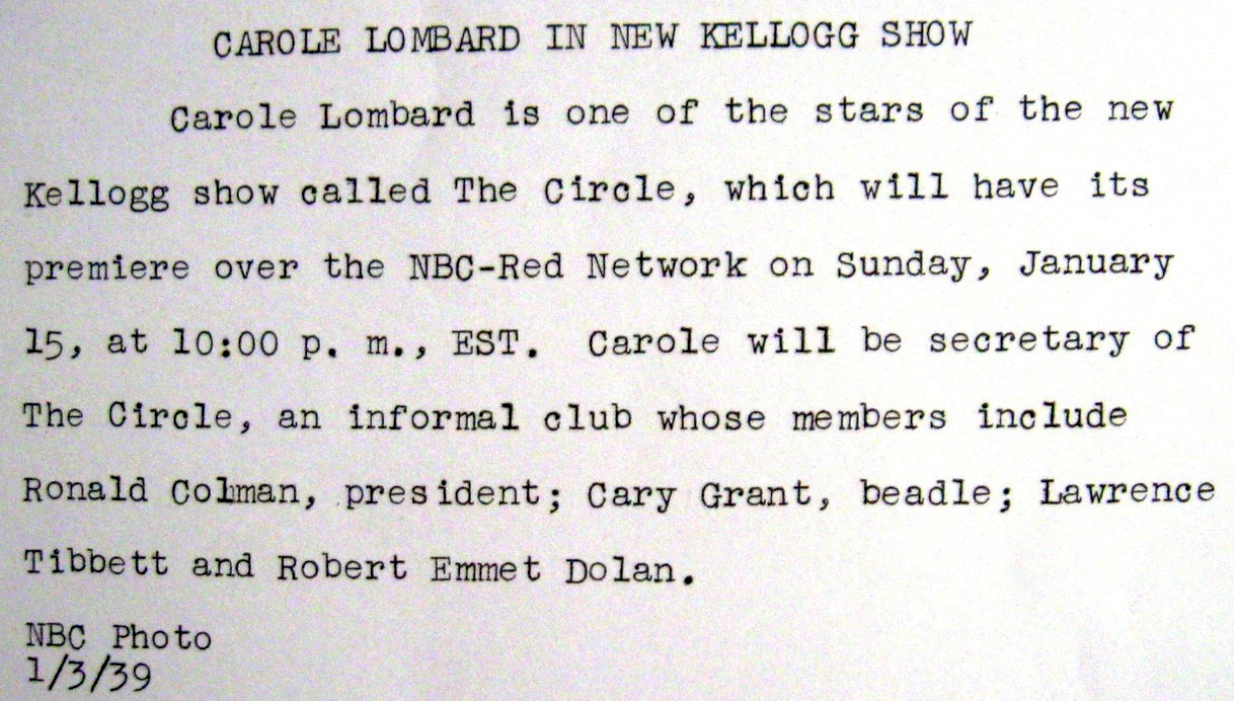 Yes, it's for Lombard the (potential) radio star, in a new series called "The Circle," and it was getting plenty of push from NBC; its sponsor, Kellogg's Corn Flakes; and others covering this broadcast medium still in its late teens. The Annenberg publication Radio Guide was among those getting in on the hype, making Lombard its cover subject for the Jan. 15-21 issue: 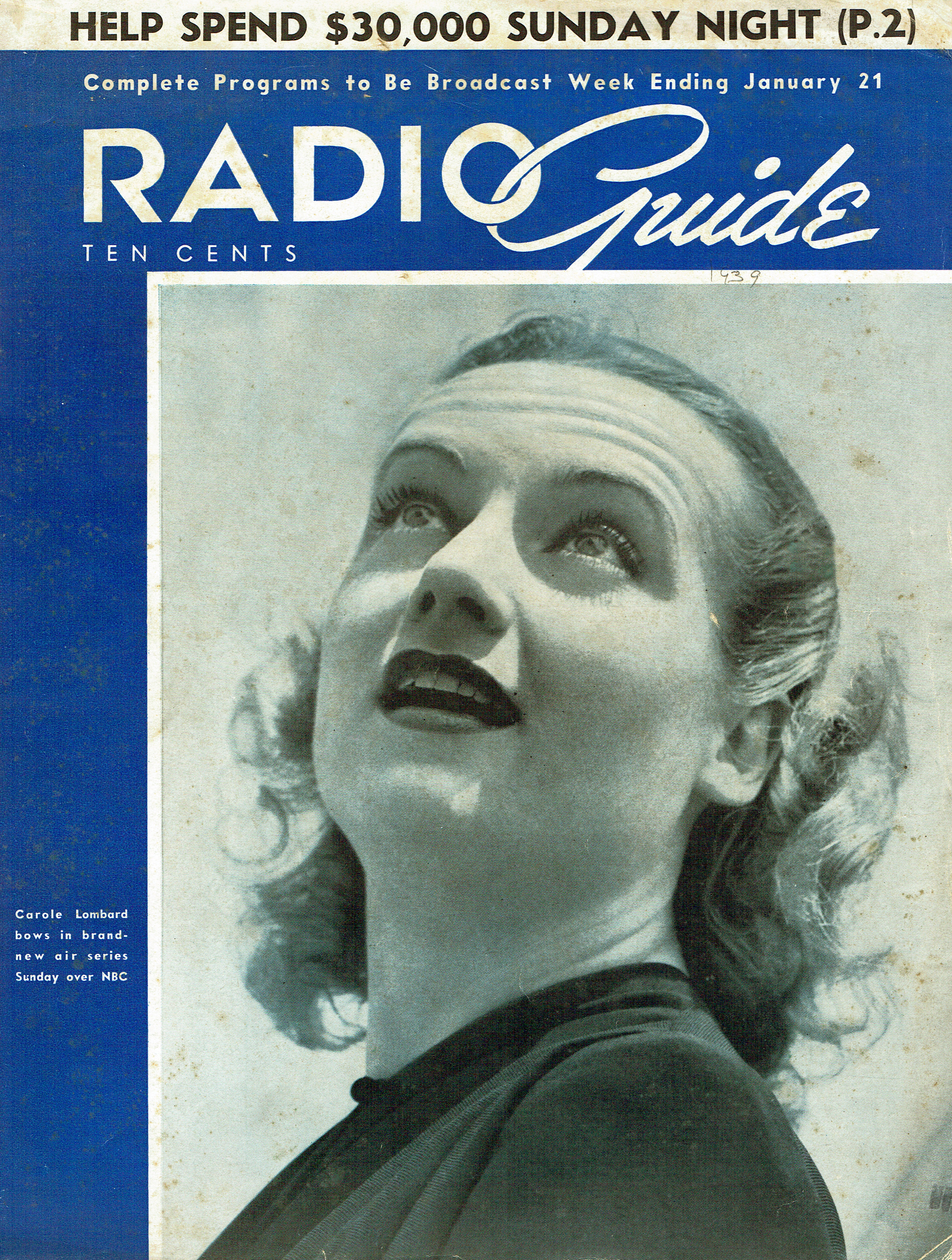 And inside, Lombard and "The Circle" garnered two large pages: 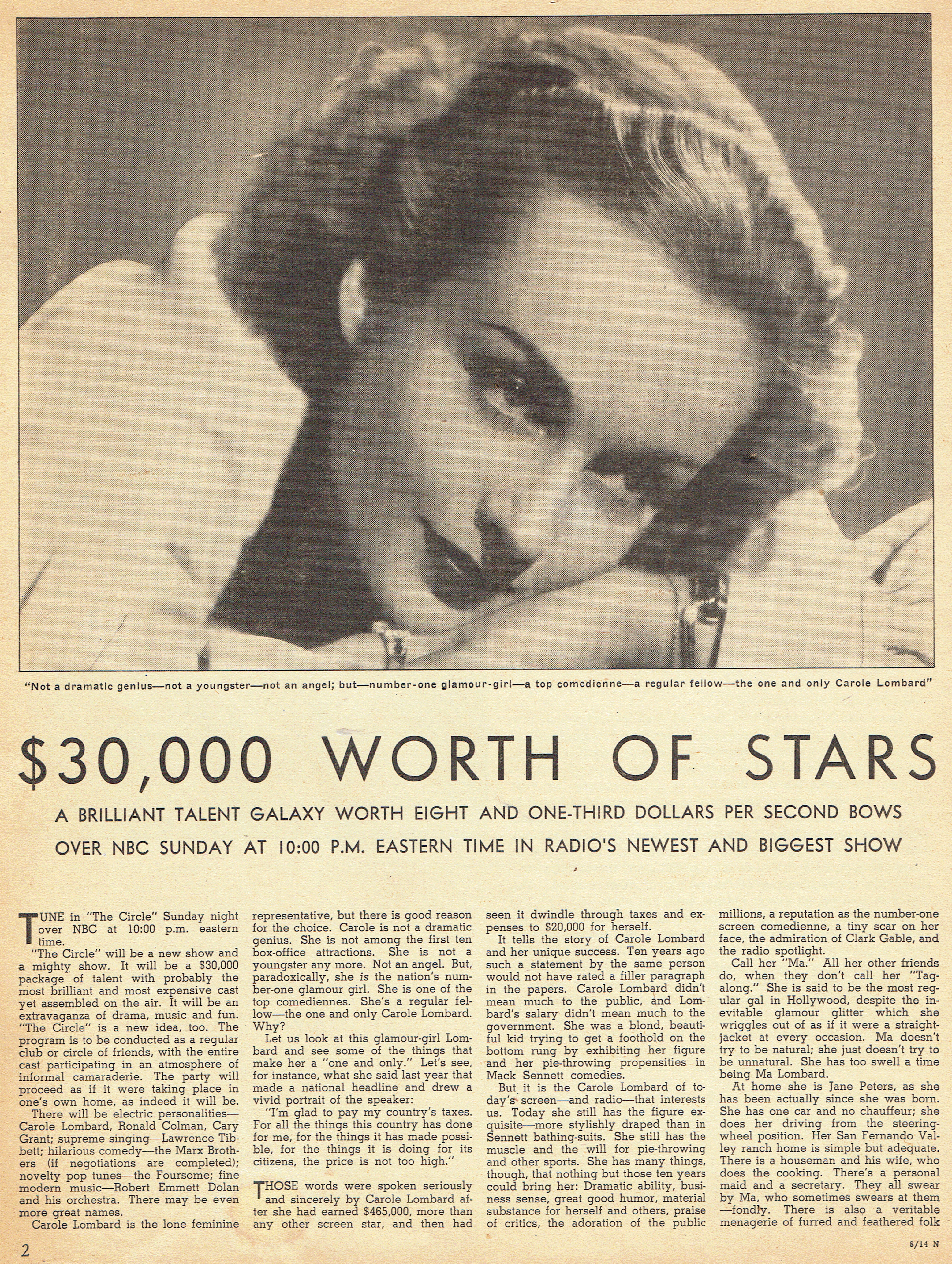 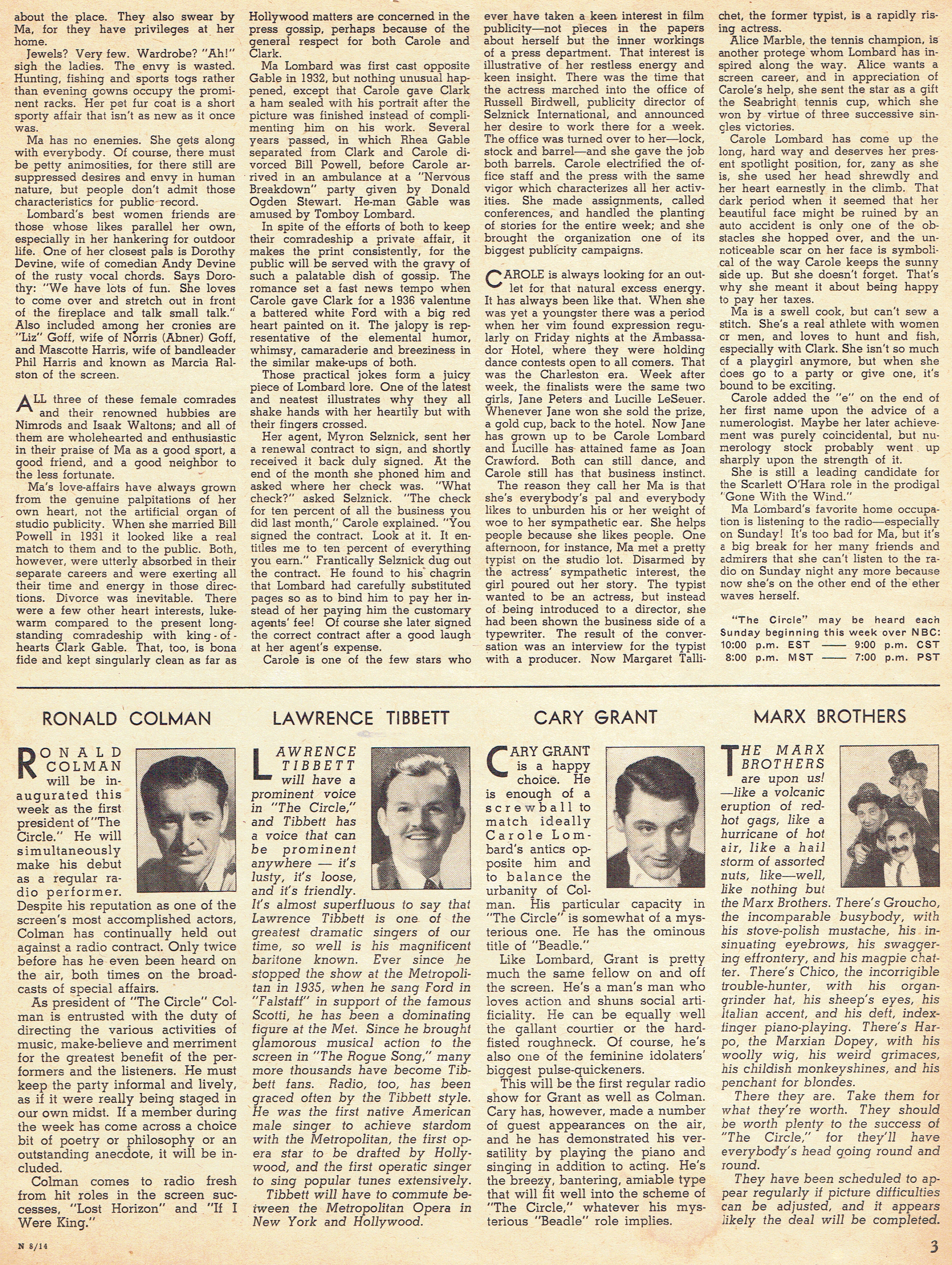 As Radio Guide was large in page size as magazines go (though thankfully everything fit upon my scanner), let's divide the Lombard part of the story into a quartet of two-column pieces: 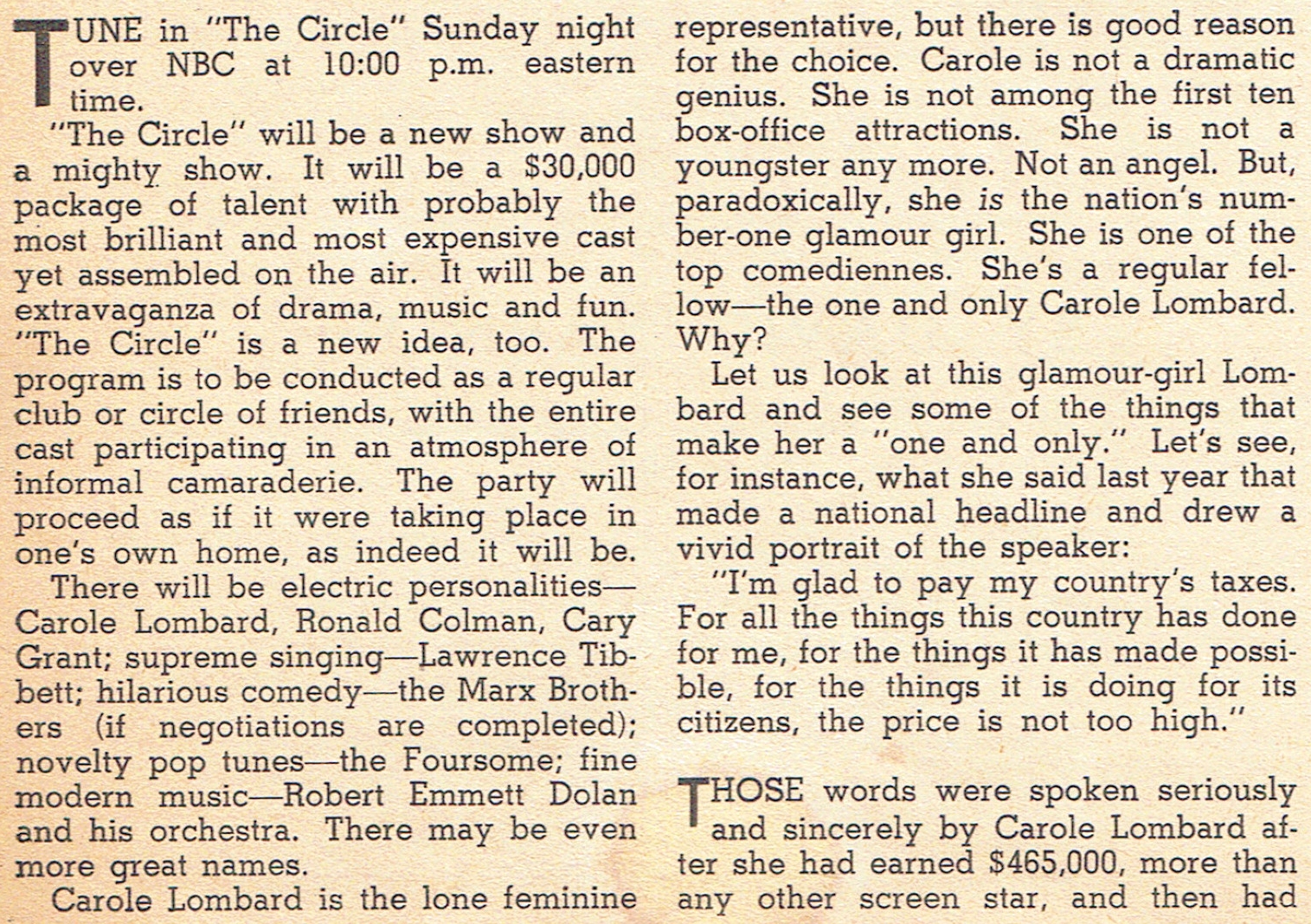 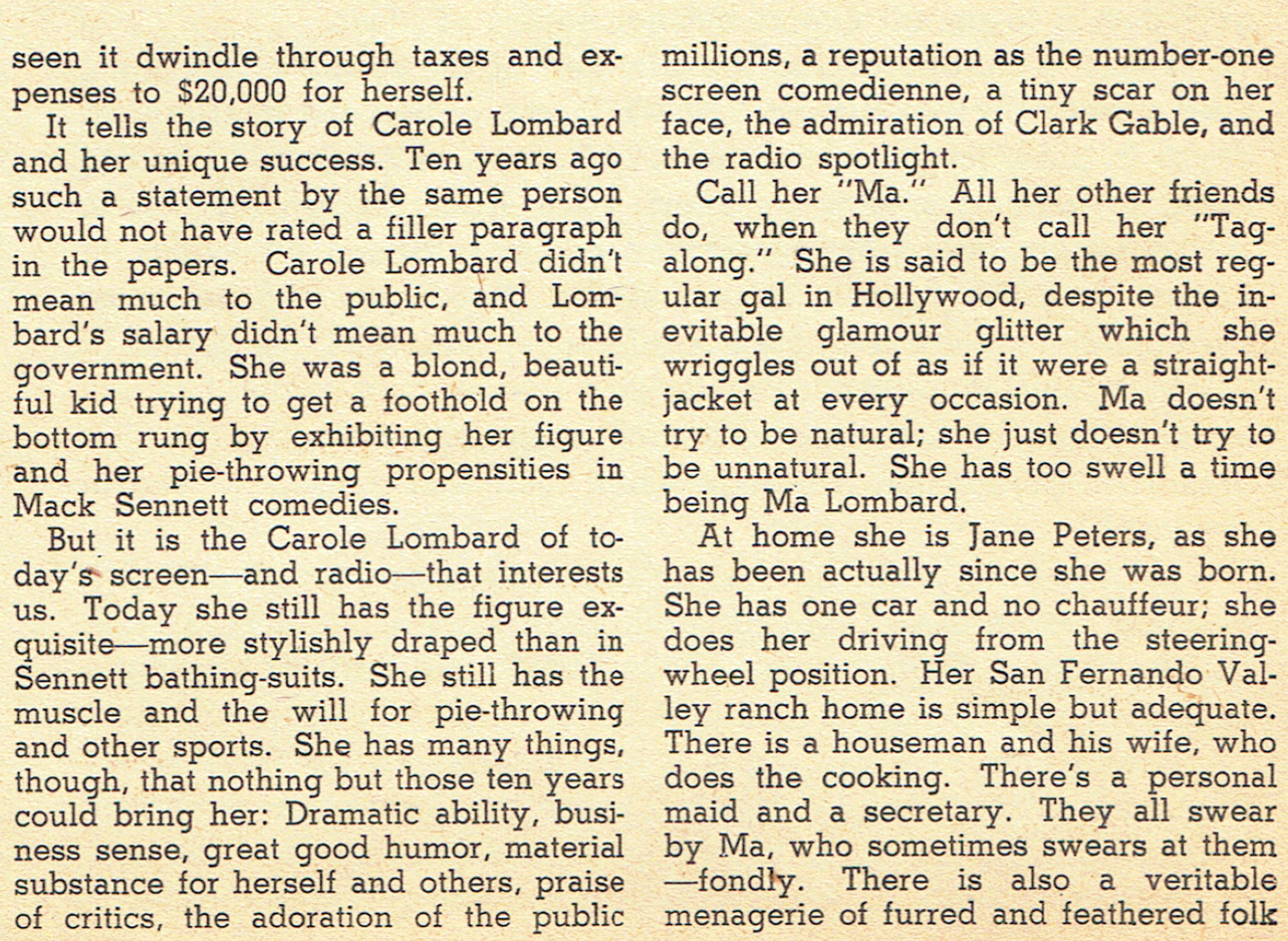 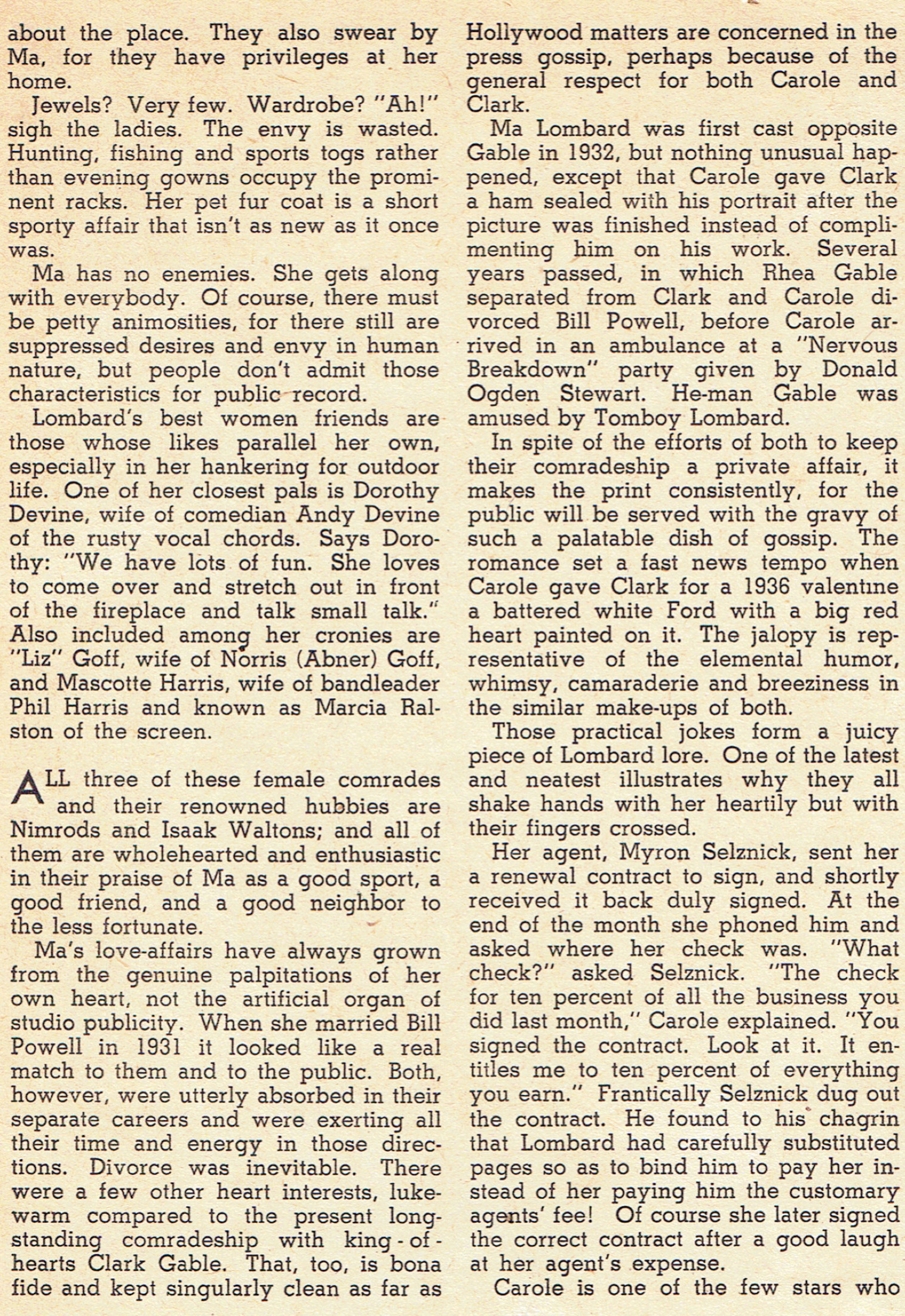 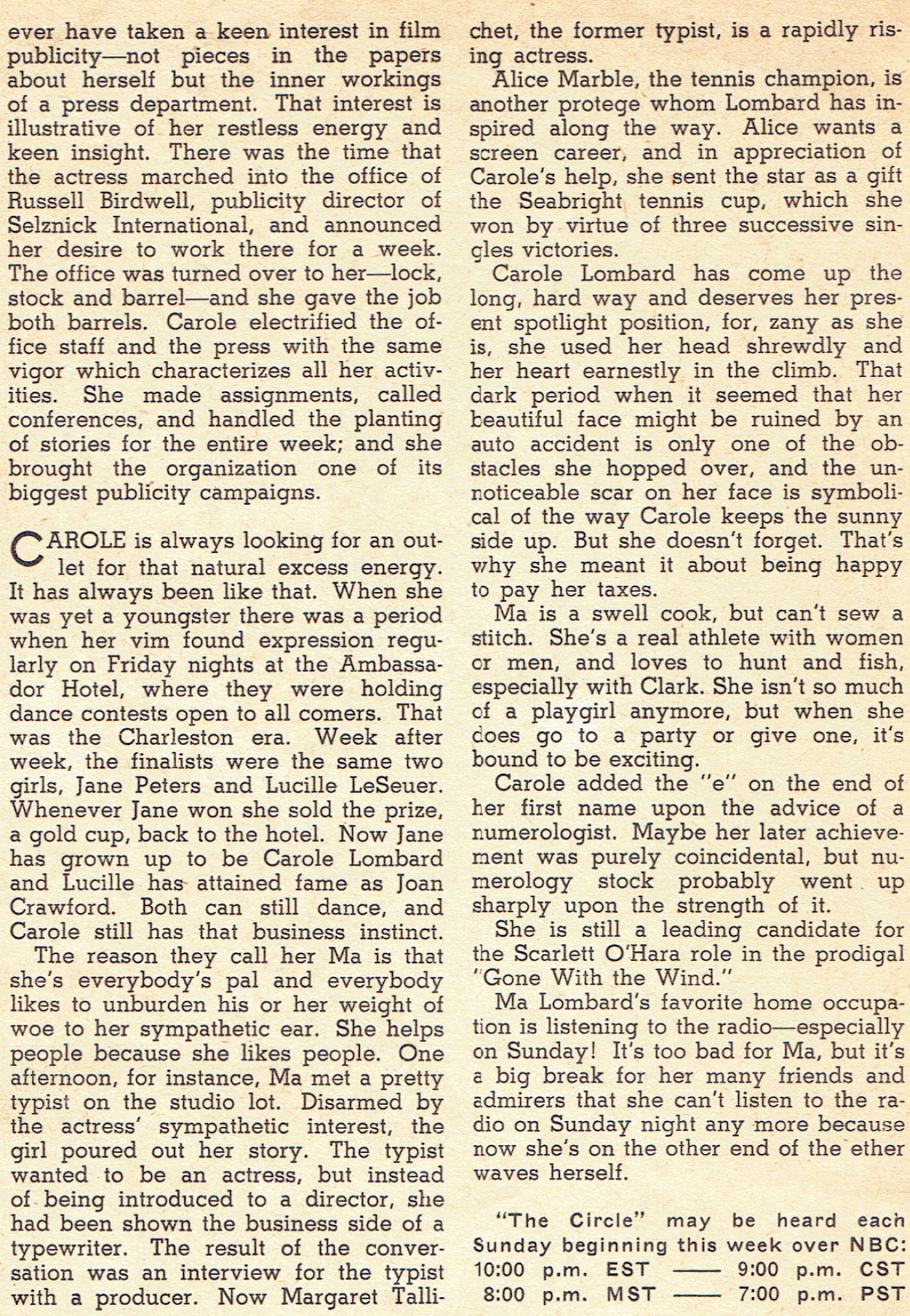 There's no byline to this, but as Lombard stories of the time go, this one tells it fairly straight; she generally was one of the best-liked members of the movie colony, and her relative lack of pretense comes through the article.

Radio Guide, like its later Annenberg property TV Guide, was best known for its listings. This edition covered New England and New York State; if you're from that neck of the woods, see how many of these fabled call letters you recognize: 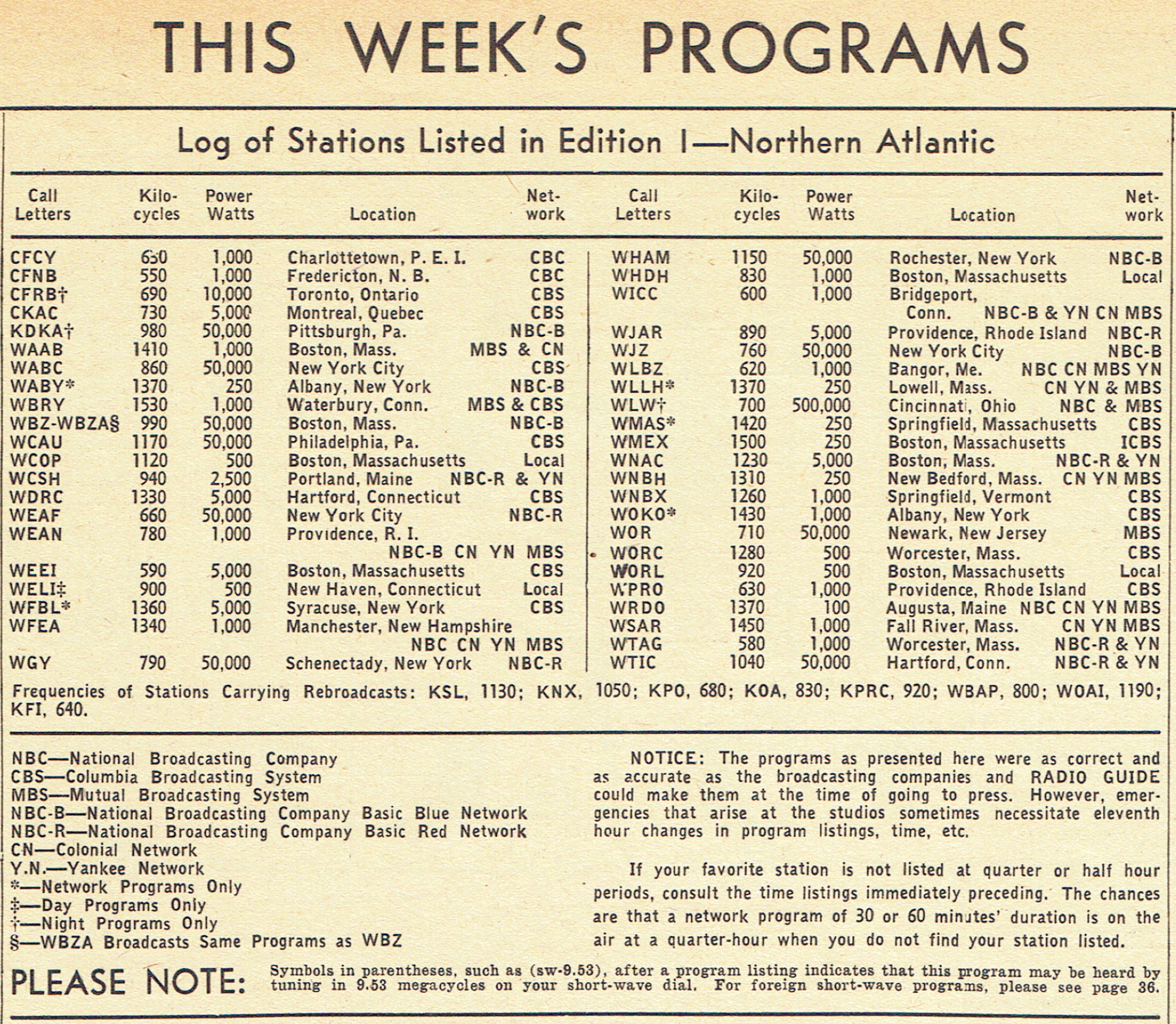 (One important clarification here: the "WABC" listed here is not the later Top 40 legend or Rush Limbaugh home, but the flagship of the CBS network. In 1946, WABC became WCBS, and WJZ -- initially the NBC Blue network flagship, then part of the new American Broadcasting Company after the Blue Network's divestiture from NBC -- inherited the WABC call letters. Also, in 1940 the FCC, seeking to avoid overcrowding on the AM dial, shifted many stations' frequencies and changed the upper end of the band from 1500 to 1600 kilohertz. So, for example, KDKA in Pittsburgh, known to current listeners at 1020 on the dial, was at 980 in 1939.)

"The Circle" was listed among the highlights for Sunday, Jan. 15, and you can see which stations carried it: 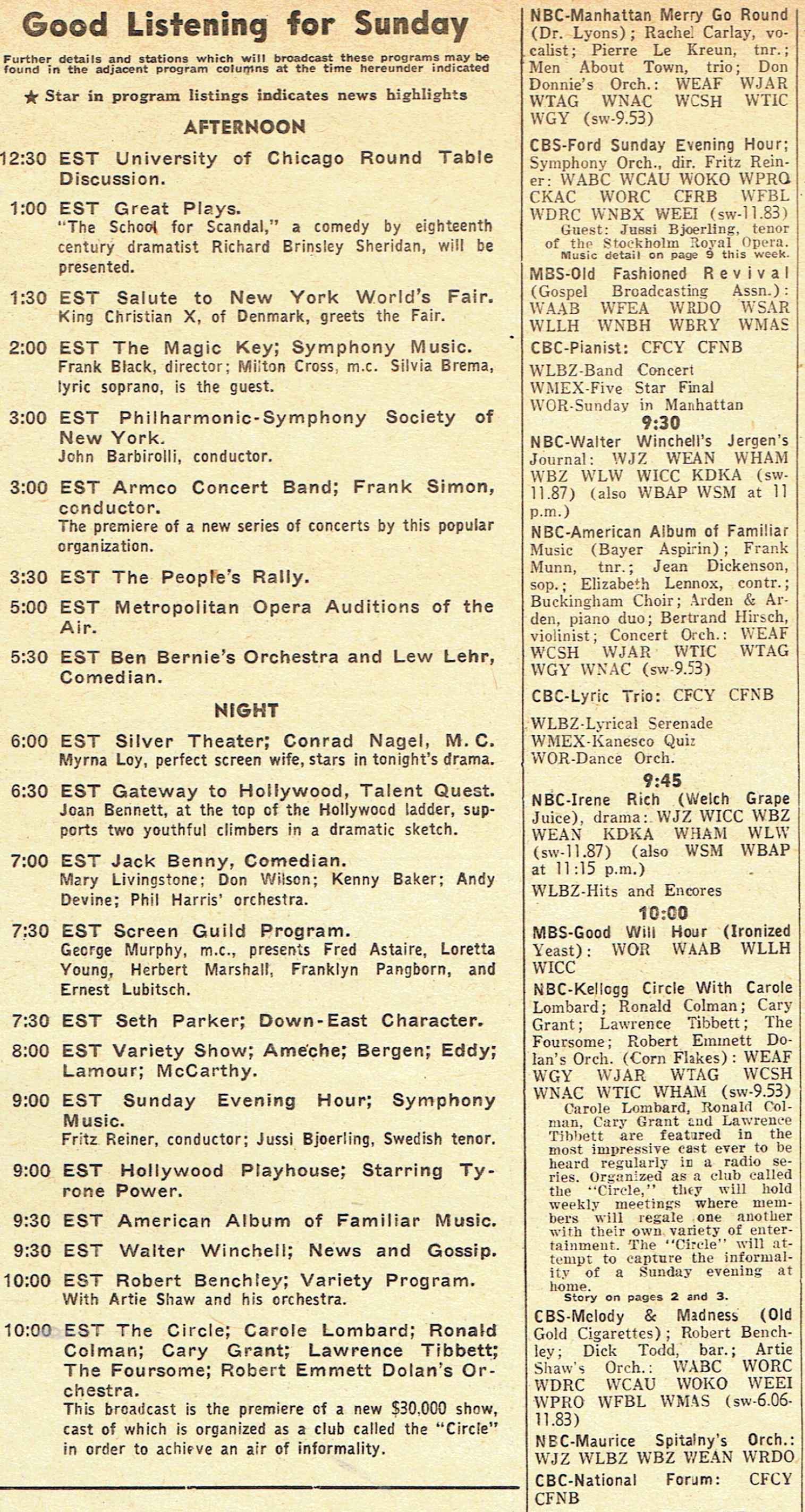 Also, see the (sw) at the end of many programs' listings? In those days, most network fare also was carried on shortwave, and that part of broadcasting -- reflecting a Europe that would plunge into war in less than eight months -- was provided a page in each Radio Guide issue: 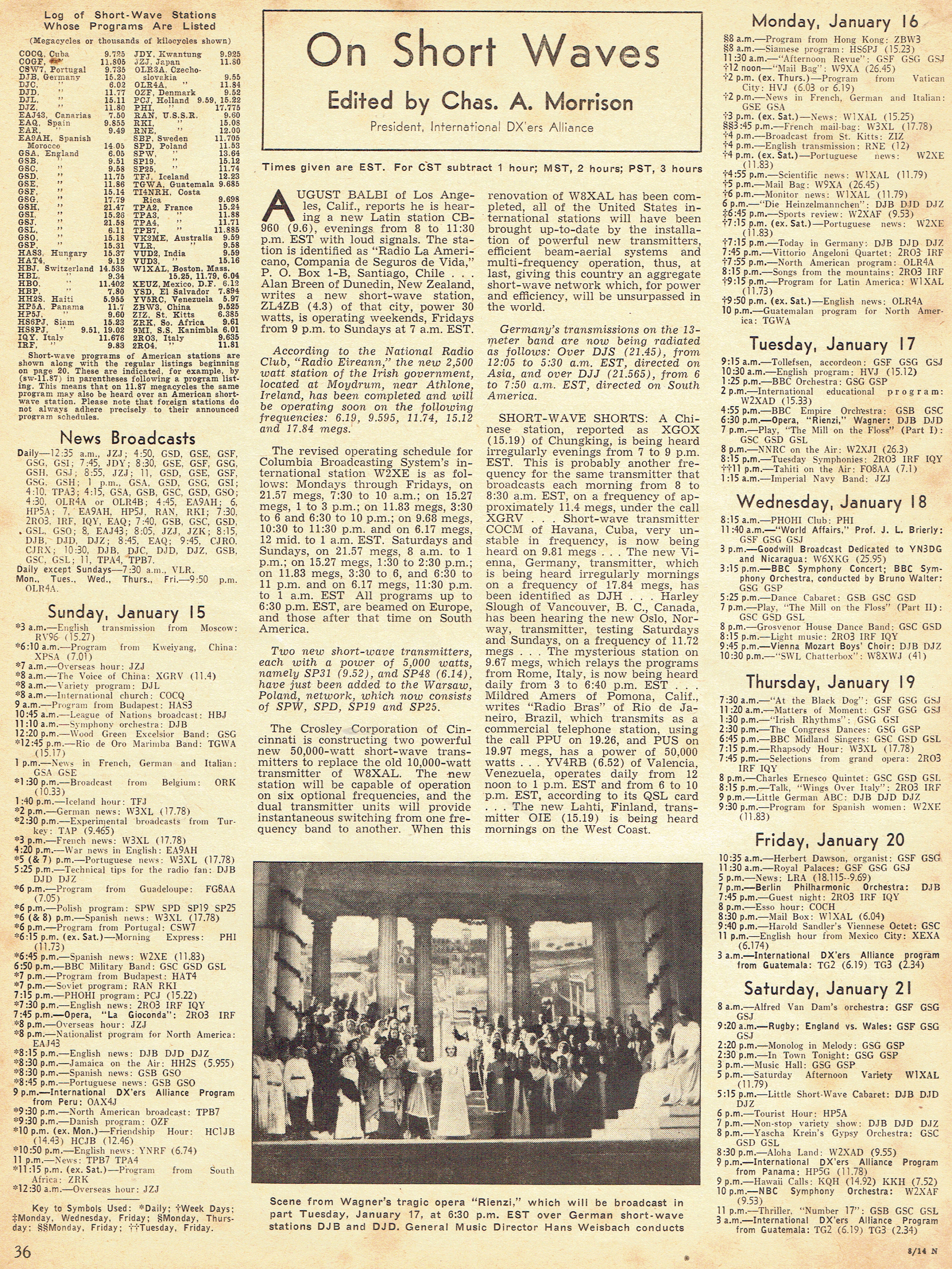 Lombard was featured elsewhere in the magazine, specifically its Hollywood column (you can see Lucille Ball in the middle photo): 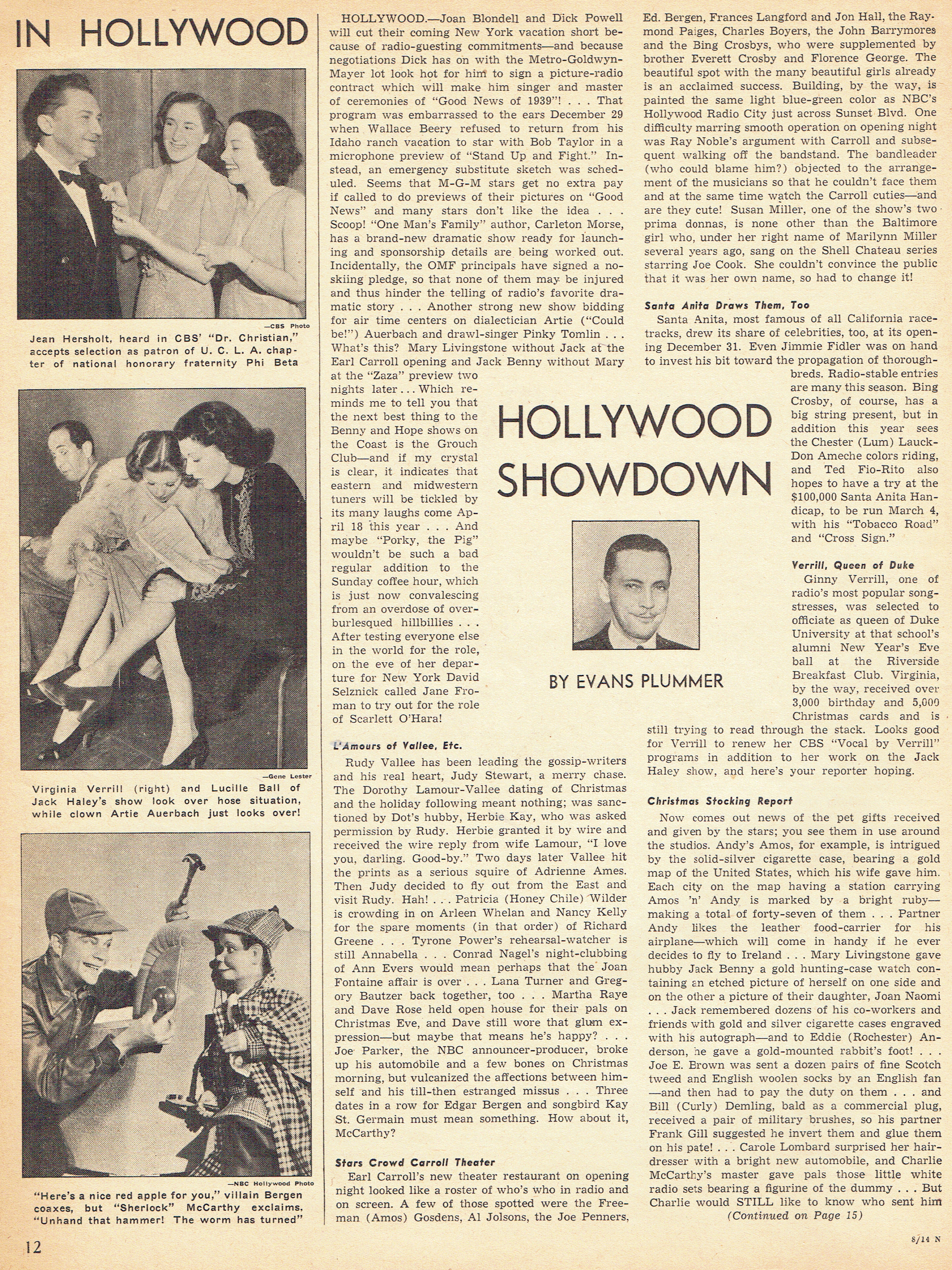 Let's isolate where Carole was found: 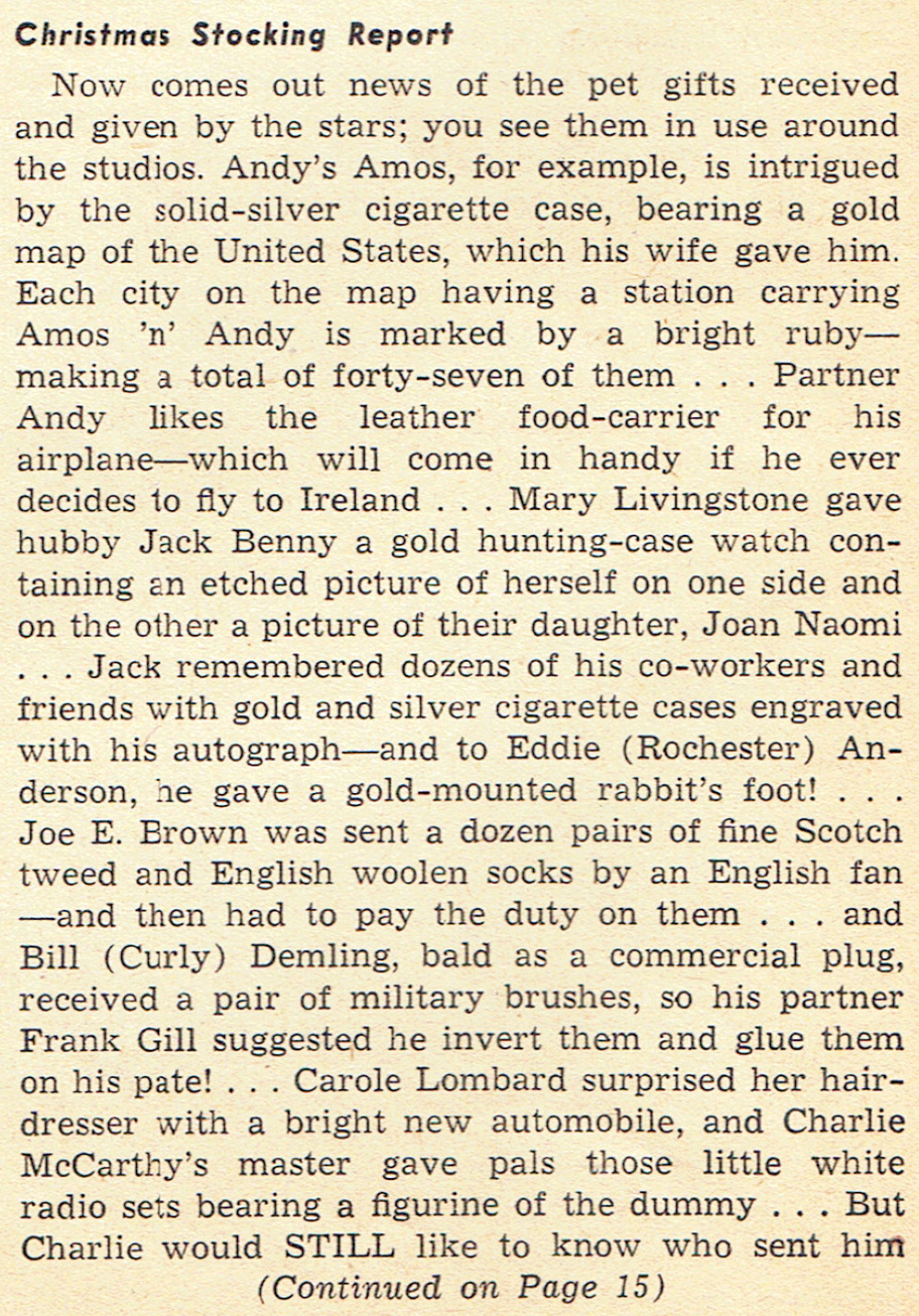 Nice to see some incredible generosity from Lombard (and that Jack Benny was anything but the skinflint of his comedic persona). Oh, and that "gift" received by Charlie McCarthy? Termites. (W.C., was that your handiwork?) 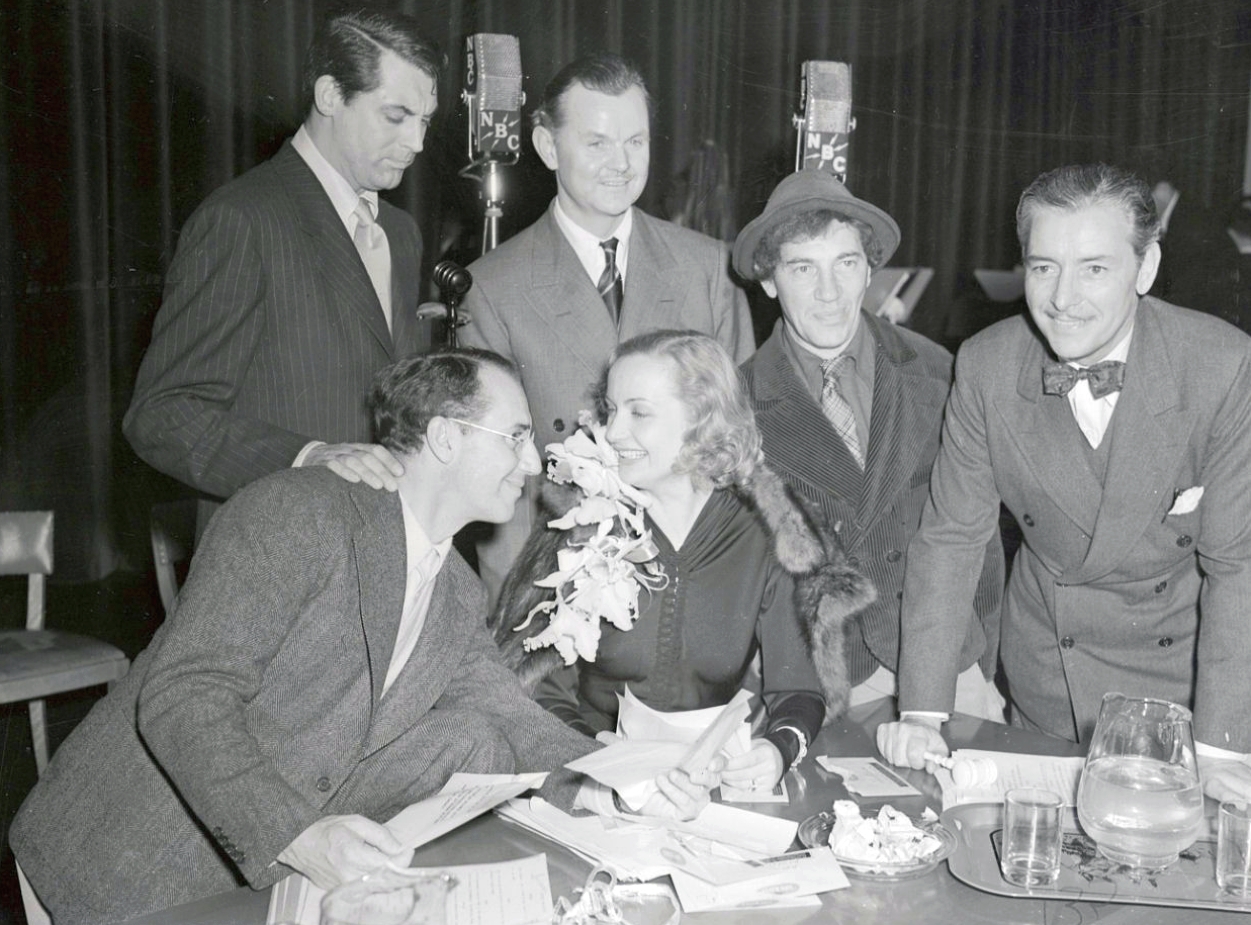 With an array of stars and plenty of publicity, what happened to "The Circle"? The equivalent of corn flakes left in milk too long. Rather than being an impromptu banter such as the current TV series "The View," everything was scripted on "The Circle," and audiences rejected the concept. Lombard left the show after several episodes (presumably getting some cases of cereal from Kellogg's as a parting gift), others left as well, and the series gradually fizzled out. For the money invested in it at the time, it remains one of the bigger disappointments in the history of old-time network radio.

Only one episode with Lombard survives, from Jan 22, 1939. You can hear it at http://www.carygrantradio.com/radio/TheCircle.mp3.
Collapse