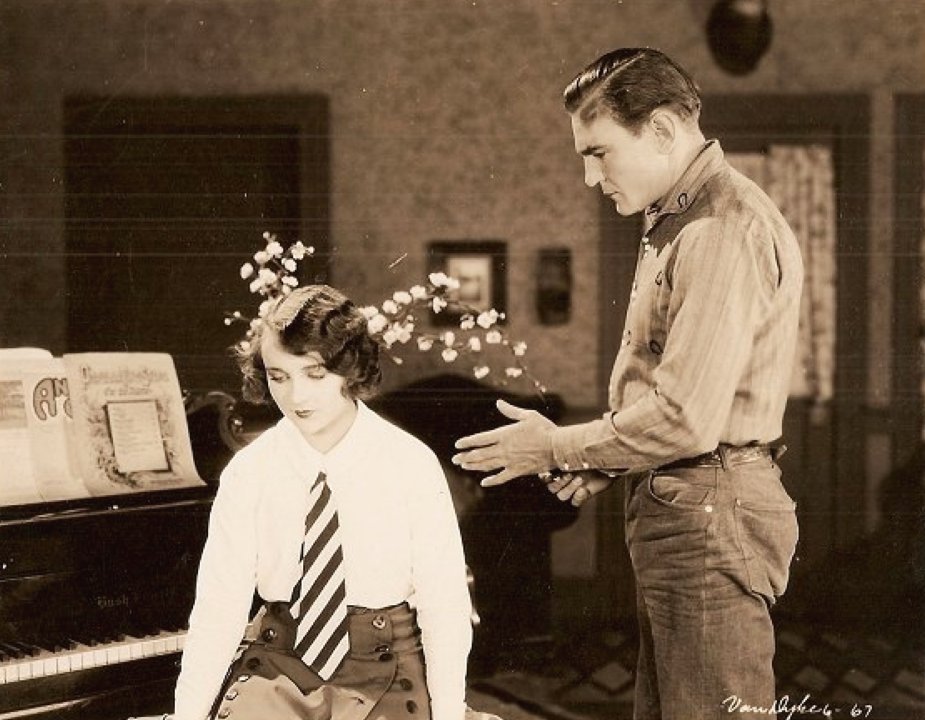 Carole Lombard wasn't quite the cinematic neophyte when she made the western programmer "Hearts And Spurs" with Buck Jones in 1925. Heck, it wasn't even her first film for Fox; that would have been "Marriage In Transit" earlier in the year. Plus, of course, there was that supporting part in 1921 for "A Perfect Crime," made under her birth name of Jane Peters.

But for the purposes of this entry, pretend "Hearts And Spurs" was the 16-year-old Carole's debut. A dozen years later, a tale was told about that production for the September 1937 issue of Silver Screen, which had Marlene Dietrich (by Marland Stone) on the cover: 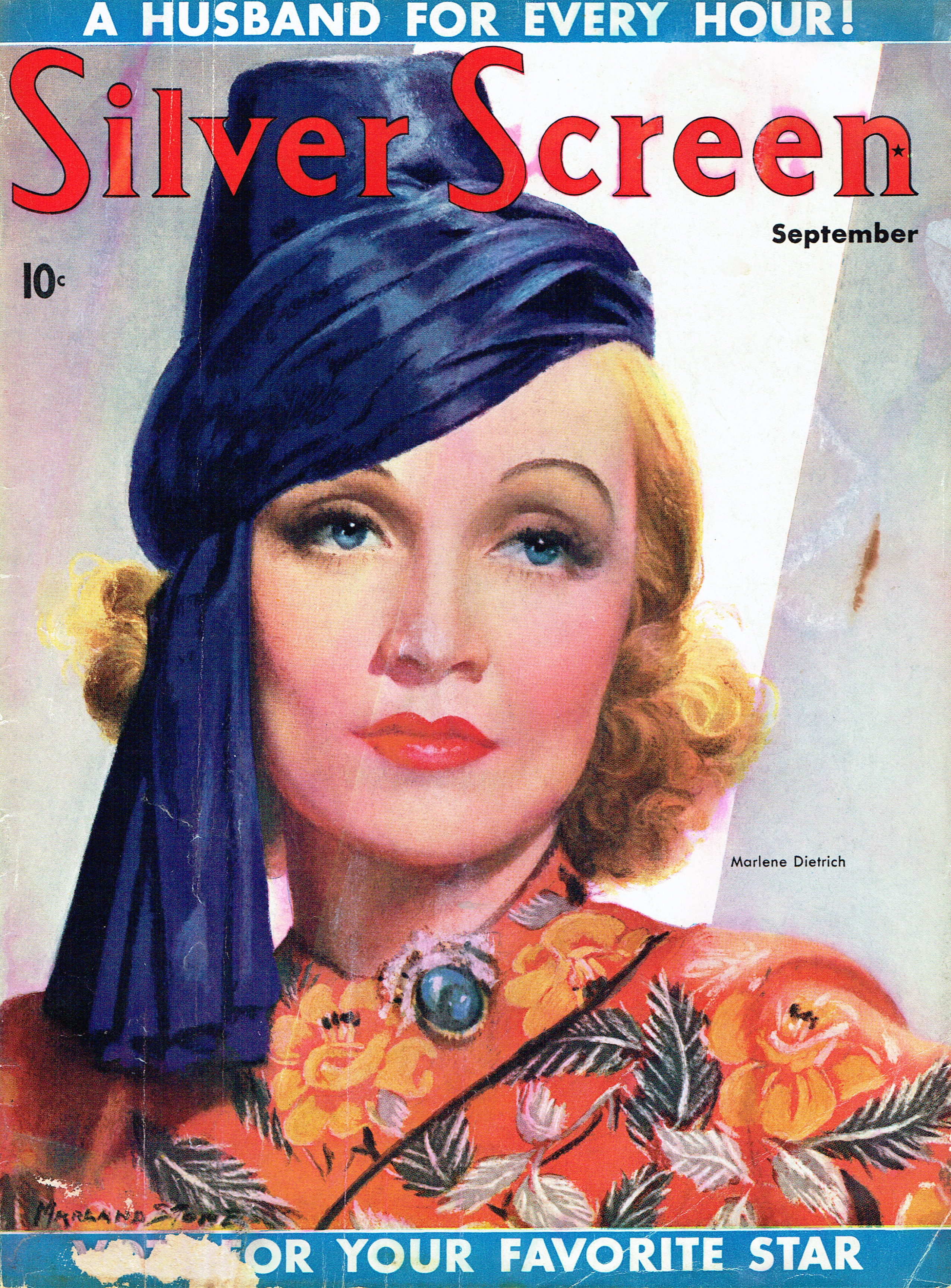 The story is called "Hazing," and while author Whitney Williams quotes no one directly, it discusses just what the teenage actress went through on that shoot in Arizona: 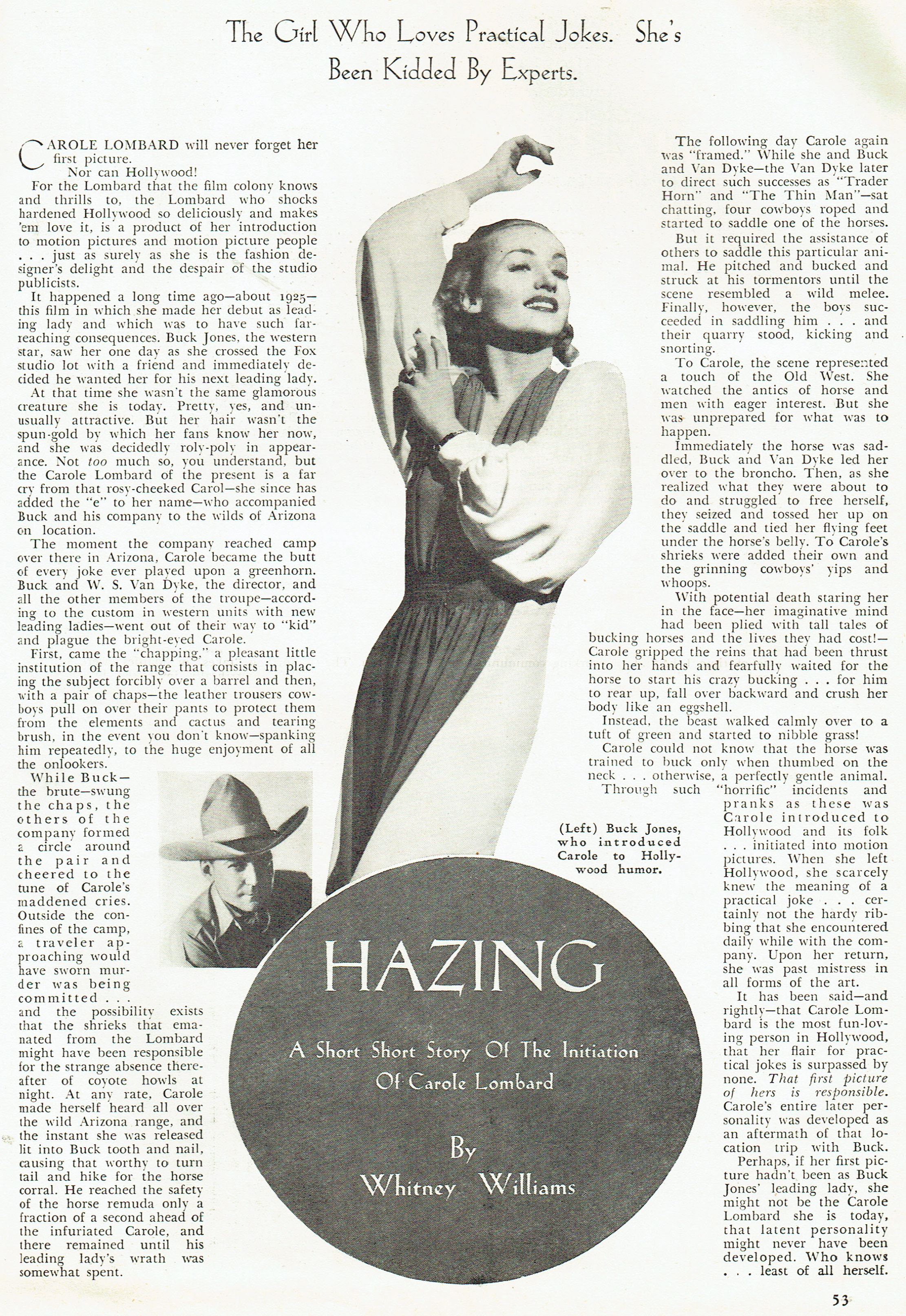 Since the article is relatively difficult to read (Silver Screen apparently was notorious for its smallish print), we'll isolate and enlarge each of the two columns:

As stated, we know it wasn't her first picture, and we also know that contrary to Williams' writing, Lombard's cinematic first name in 1925 was indeed "Carole." Alas, we can't analyze the film because it, like all other of her movies before her automobile accident, is lost. But the anecdotes are intriguing, and in retrospect almost a bit cruel.

The tale about Lombard and the horse...would this have been her first interaction with an equine? It's possible she rode a horse while a child, but we don't have any proof. By the 1930s, Carole had become quite fond of horses, whether on the track, the polo grounds or on the ranch, both before and after marrying Clark Gable.

A sad footnote to this story is that less than six years after it ran, all three principal figures would be gone. Lombard died in a January 1942 plane crash, Jones was among the several hundred victims of the Coconut Grove fire in Boston that November and director W.S. Van Dyke, suffering from incurable cancer, fatally shot himself in February 1943.

Another Lombard tidbit was printed accompanying the table of contents: 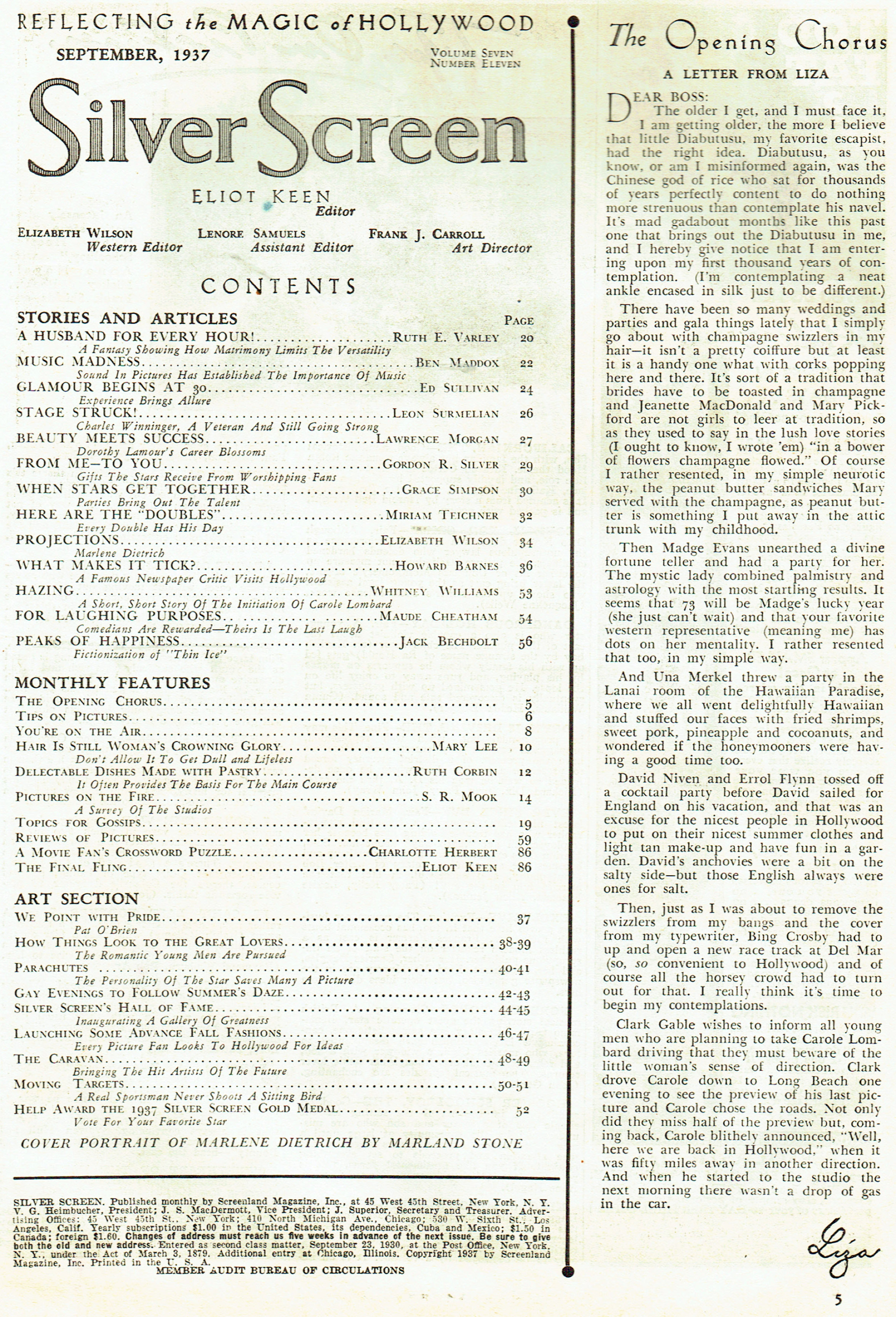 The tidbit in question is at the bottom of that column, written by "Liza" (which I'm guessing to be a pseudonym for Elizabeth Wilson, its "western" editor). Here it is, in larger form: 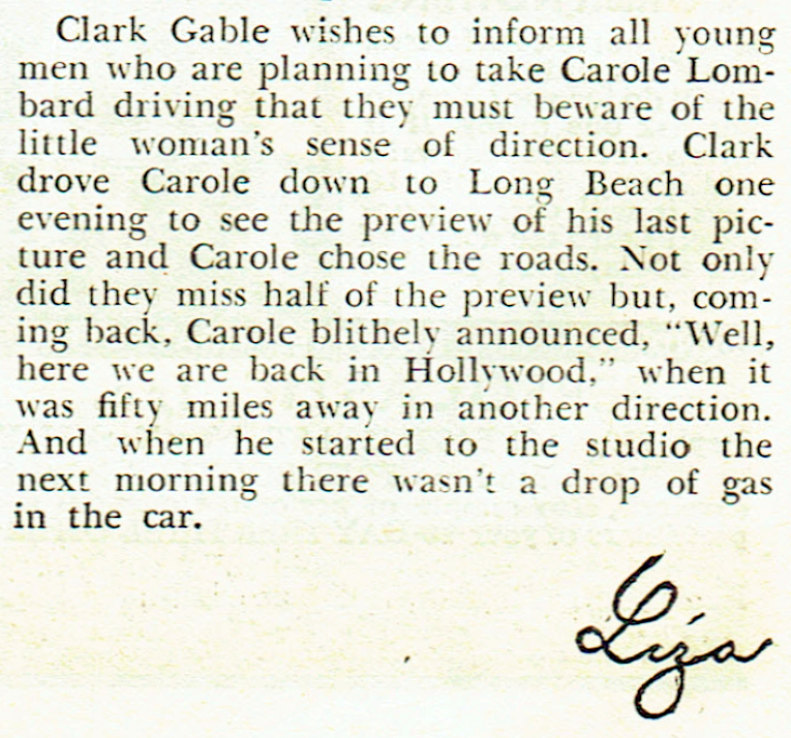 One would also think that Gable would wish to inform all young men planning to take Lombard driving to get his approval first.

Wilson -- who spent many years writing and editing for Silver Screen and its sibling mag, Screenland -- contributed her regular feature, "Projections," on that month's cover subject: 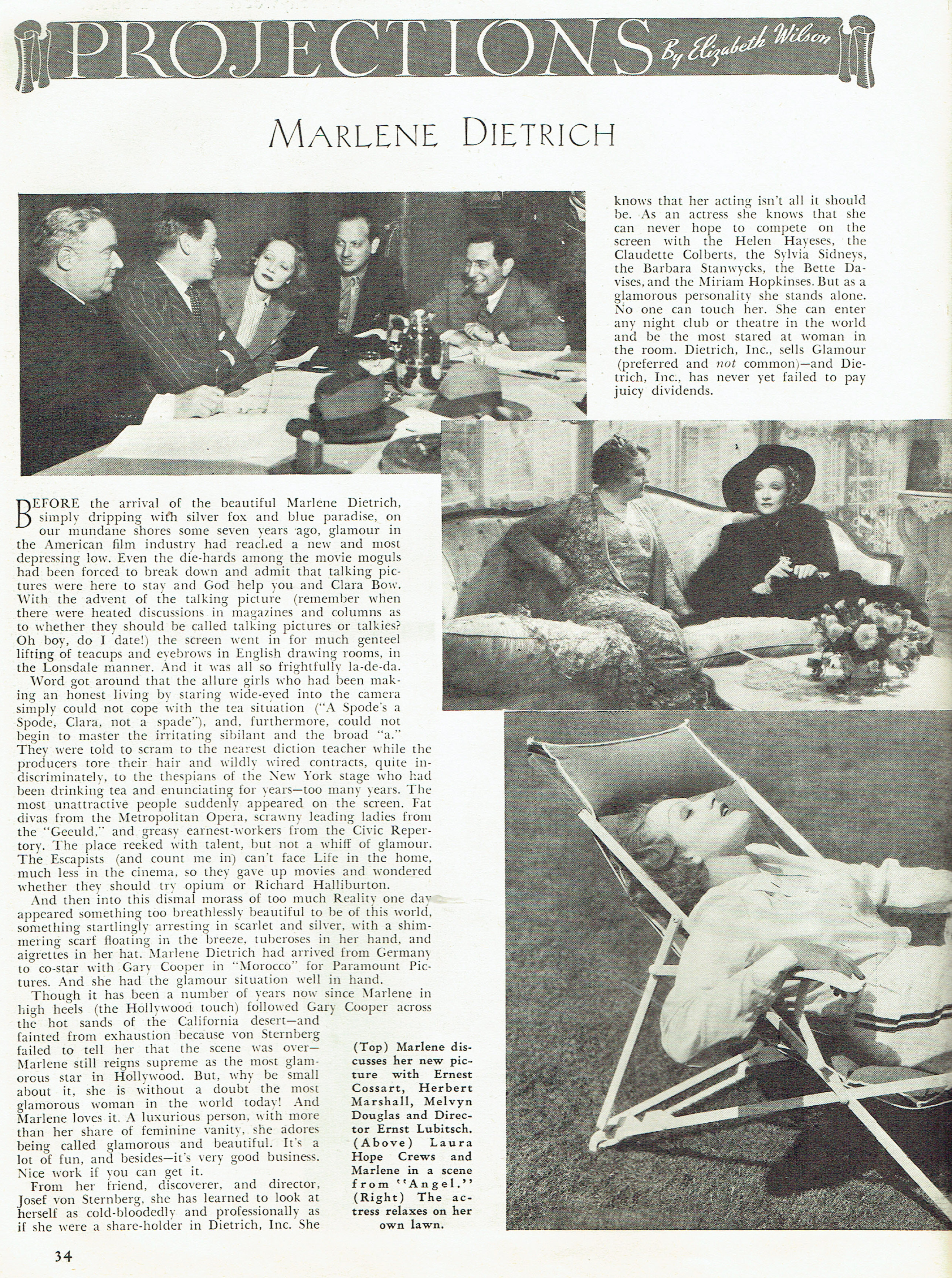 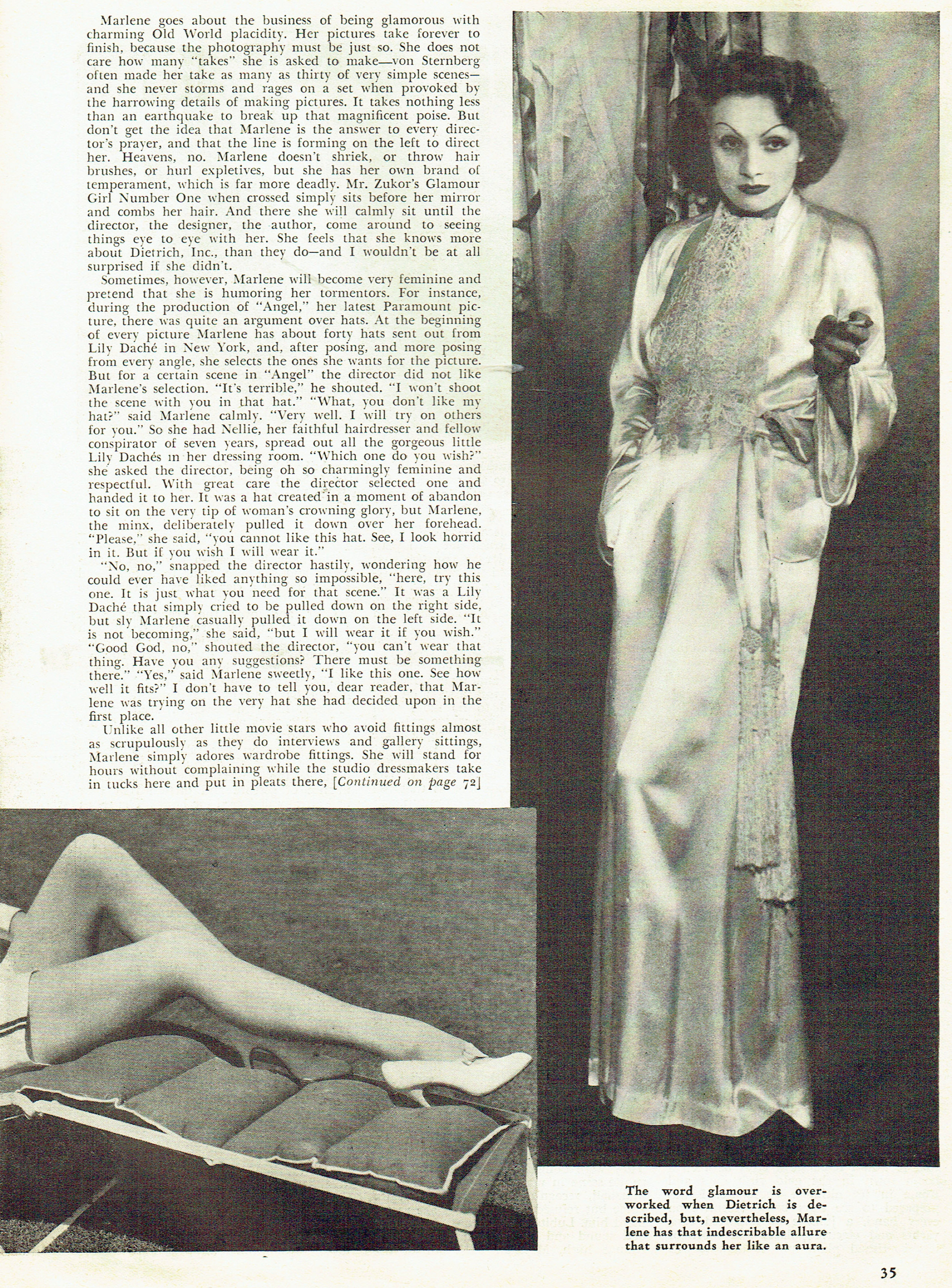 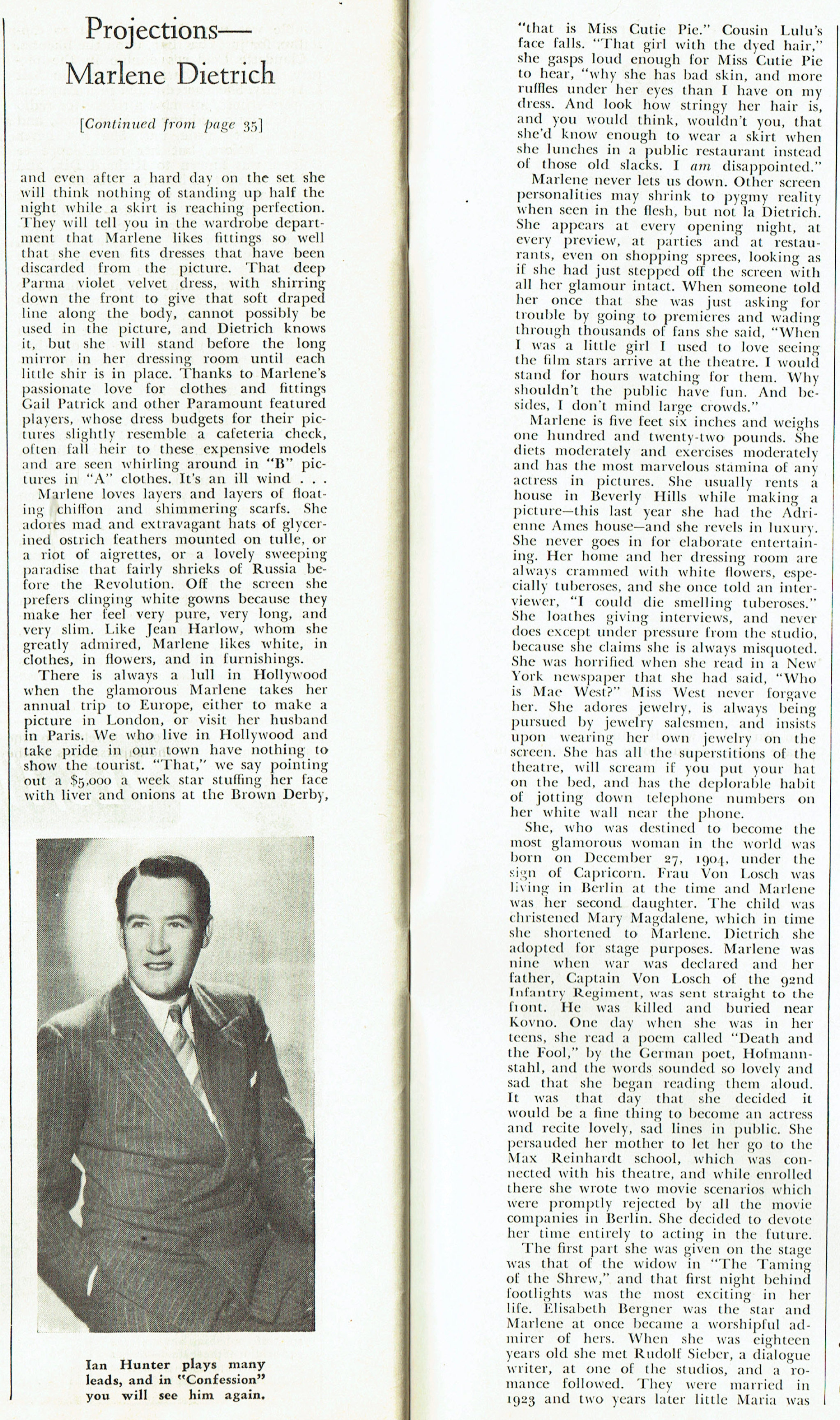 Interesting to read about the falling out between Dietrich and Mae West, once close friends at Paramount.

And, of course, there were ads for films in this issue, from MGM... 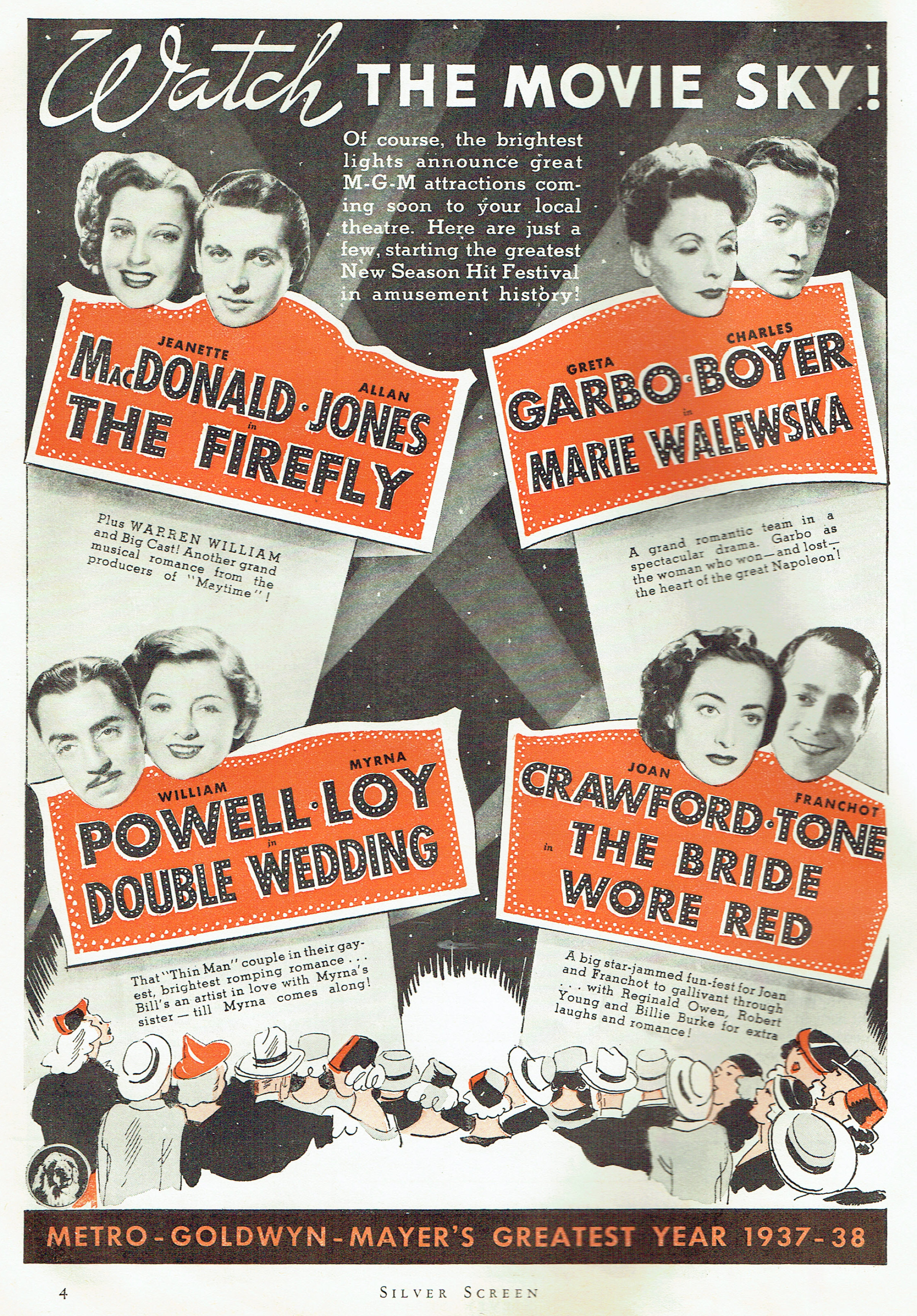 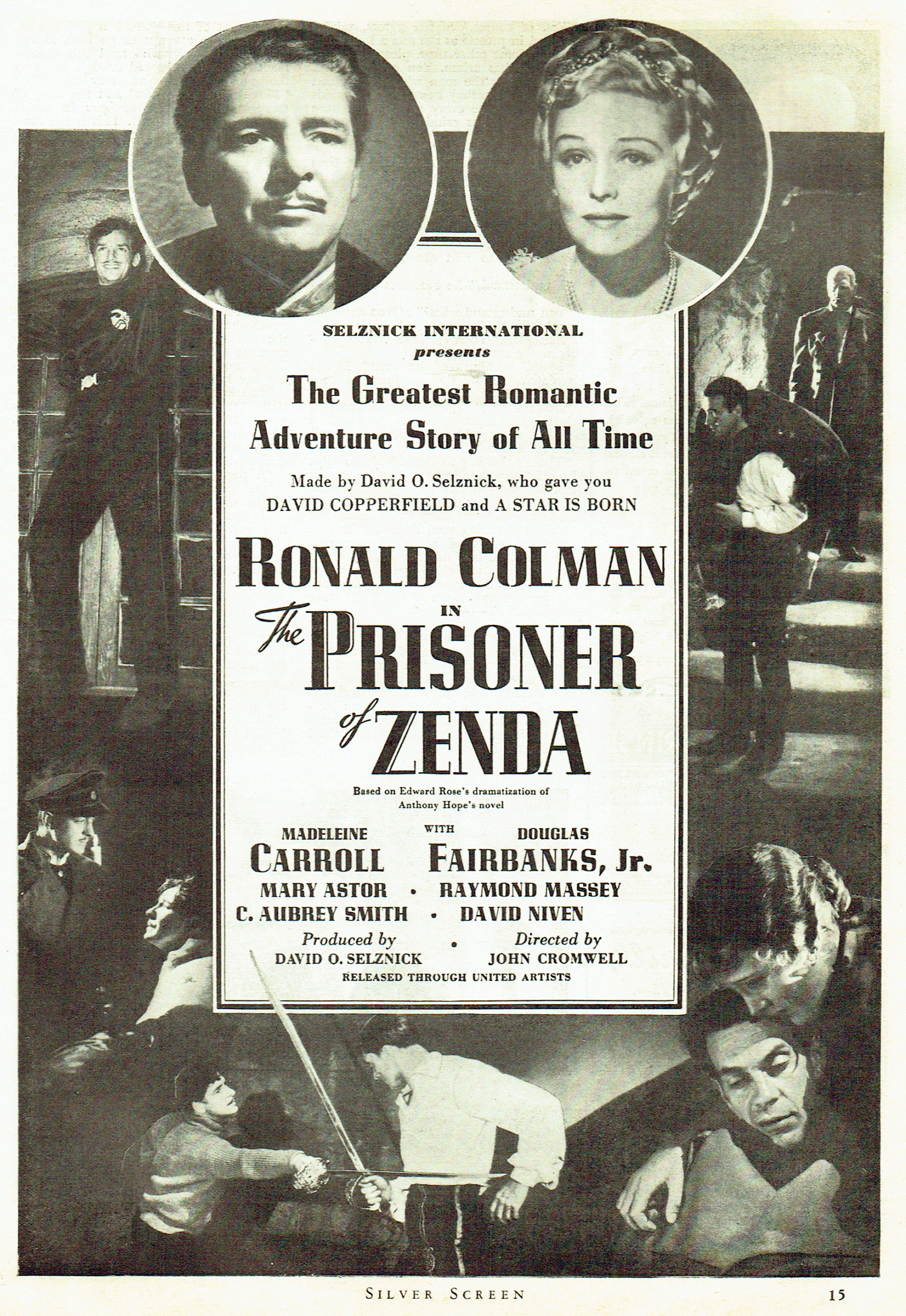 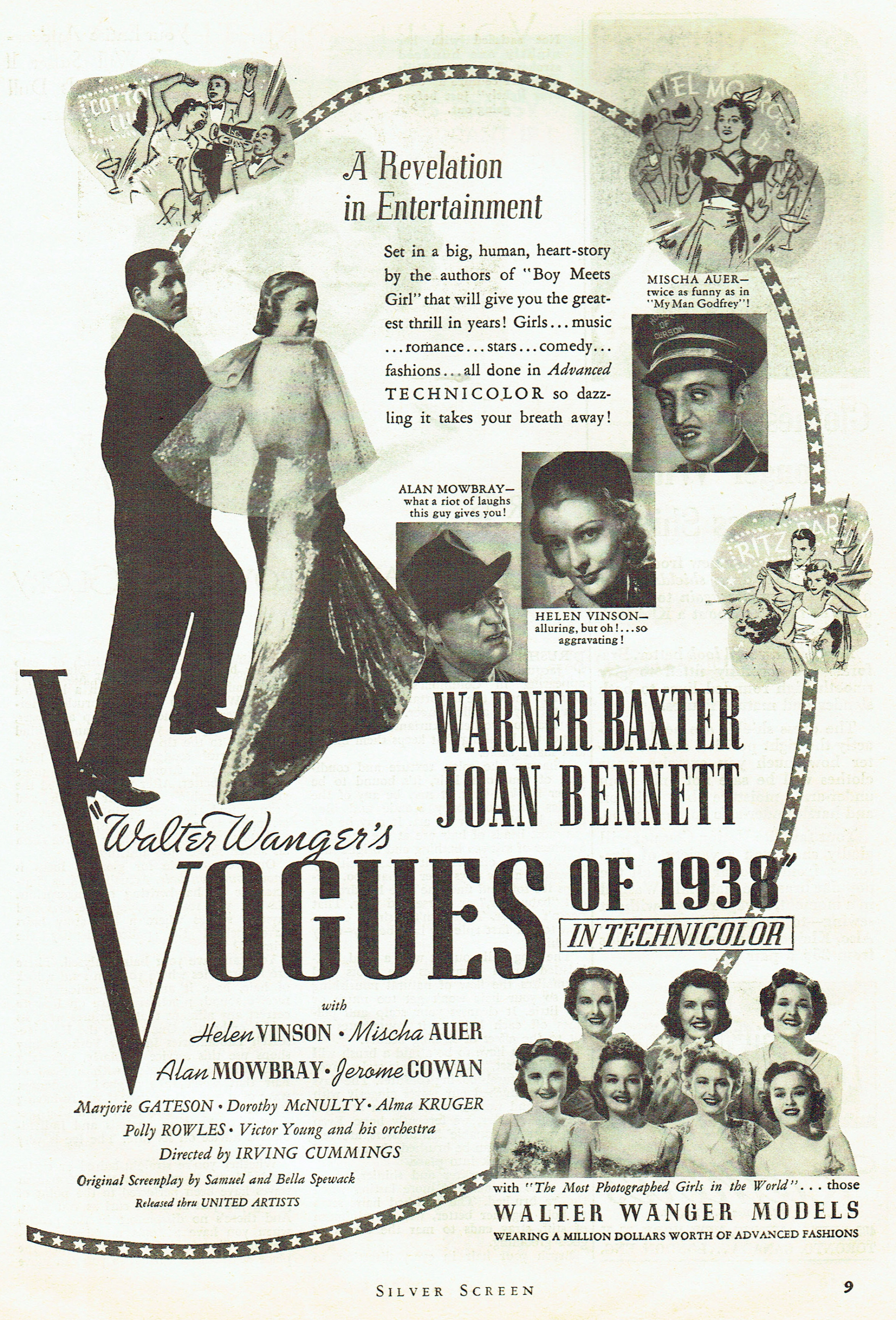 Note that "Marie Walewska" was renamed "Conquest," and the ad for "Vogues Of 1938" doesn't include mention of what the film is best known for today -- the introduction of the beautiful pop standard "That Old Feeling." And here it is, performed by Frank Sinatra (today marks the 98th anniversary of his birth), in a lovely recording from 1947, during his Columbia days: