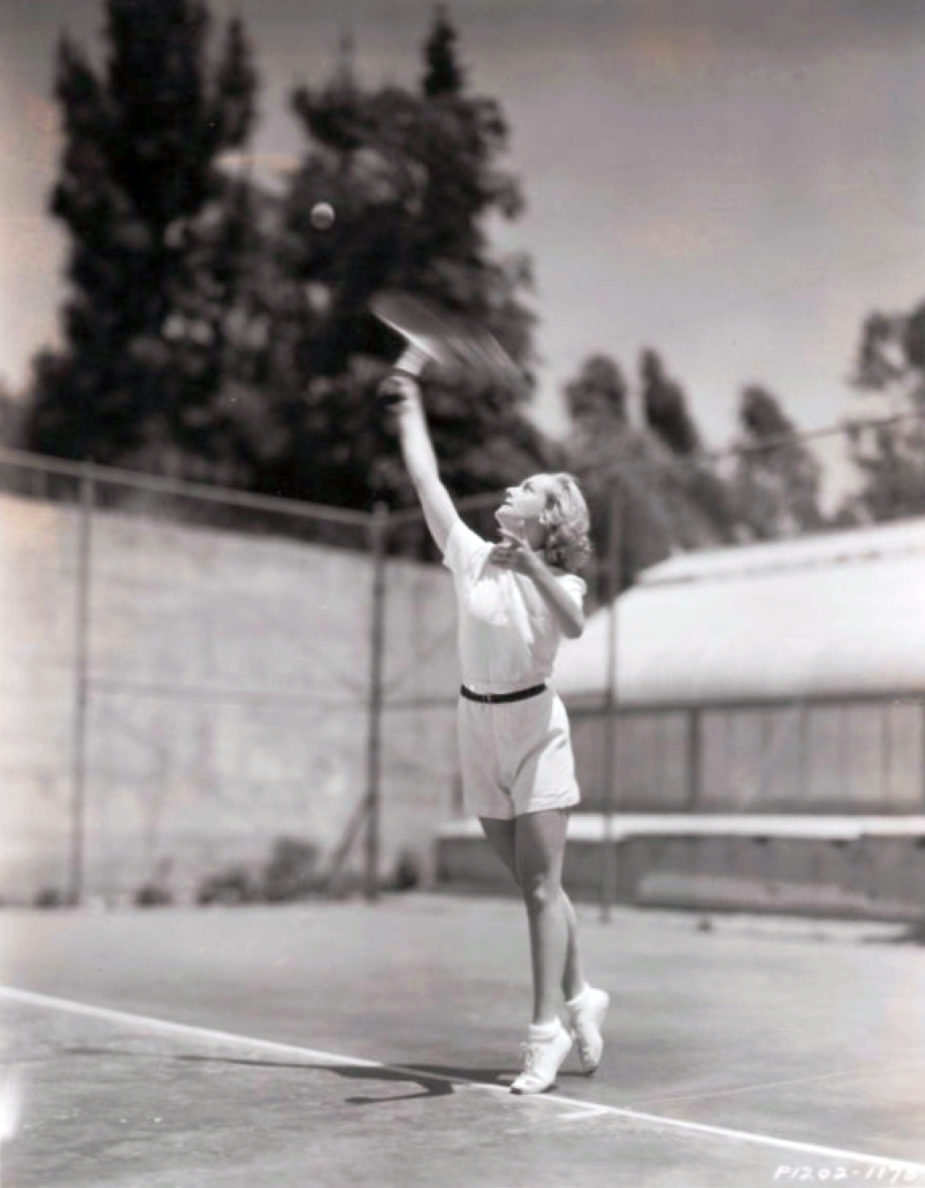 Carole Lombard led such an incredibly active life, albeit brief it was, that we sometimes think she possessed a nearly superhuman energy. That wasn't the case, of course; she needed to recharge her figurative batteries as much as the rest of us. Such a down time for her came during the first few months of 1935, not all that long after coming to grips with the shocking passing of Russ Columbo. 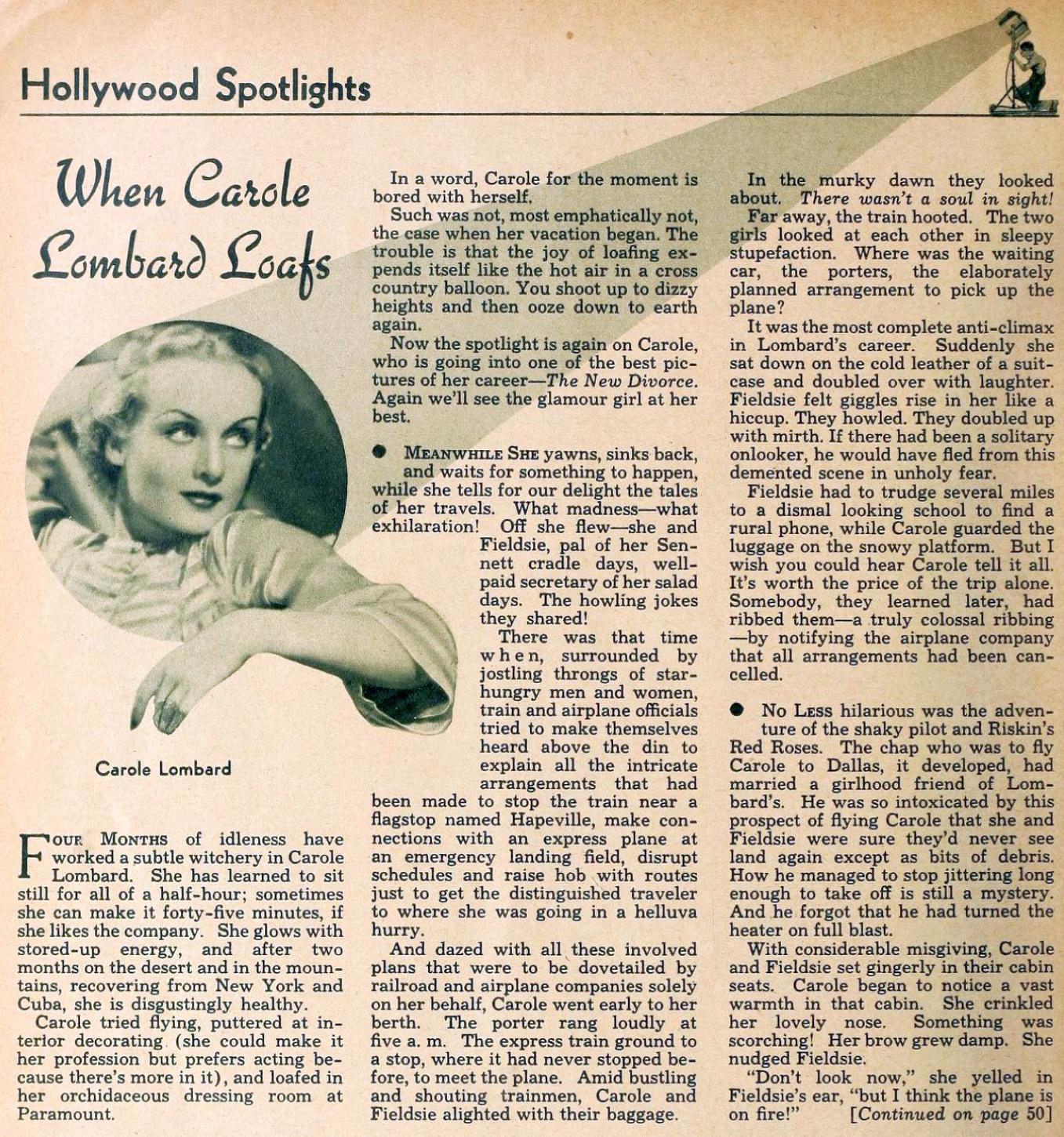 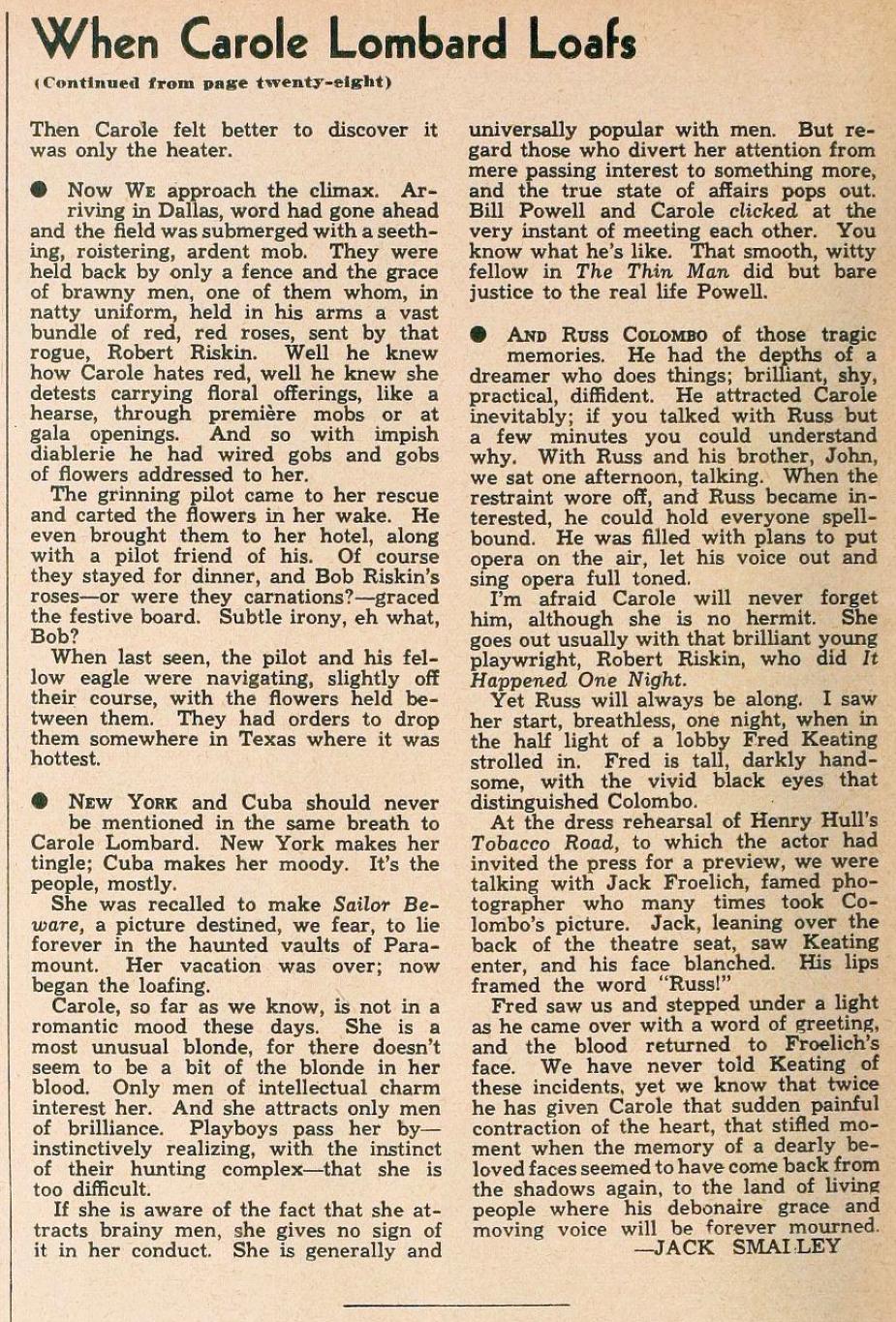 * I had never heard Lombard associated with a film called "The New Divorce"; heck, I'd never heard of a film by that name. It certainly doesn't sound like an early name for "Hands Across The Table," which has nothing to do with divorce. (The Internet Movie Database lists no film by that title.)

* The only town I could find named "Hapeville" was in Georgia, a southern suburb of Atlanta near the current international airport; it's also where the first Chick-fil-A restaurant opened. There is a Hapeville depot, which may have been where Carole and Madalynne Fields were dropped off. But it doesn't snow much in that area.

* The story that the plane they took caught fire brings up bad thoughts for current readers (some years later, Carole and Clark Gable were aboard another uncertain flight).

* So Lombard hated red? I'd heard she wasn't particularly fond of pink, but this puts a new twist on things.

* She and Fieldsie apparently spent a night in a Dallas hotel, but which one? Looks like something for Metroplex resident Carole Sampeck (of The Lombard Archive) to investigate.

* An intriguing anecdote about actor Fred Keating, whose resemblance to Columbo apparently caused a reaction from Carole. Keating (1897-1961) appeared in 14 films between 1934 and 1940, of which "Eternally Yours" is probably his best known. Here's a pic of Keating, and he indeed somewhat resembles Russ, though he's nowhere as swarthy: 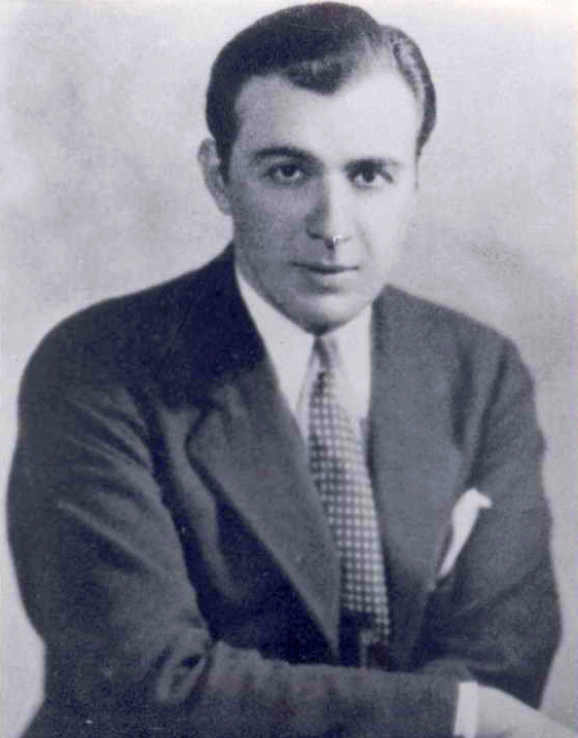 Two other stories of note are in this issue, whose cover featured Charles Boyer and Katharine Hepburn (not to mention an announcement that in the U.S., the magazine's price had been cut from 10 cents to five): 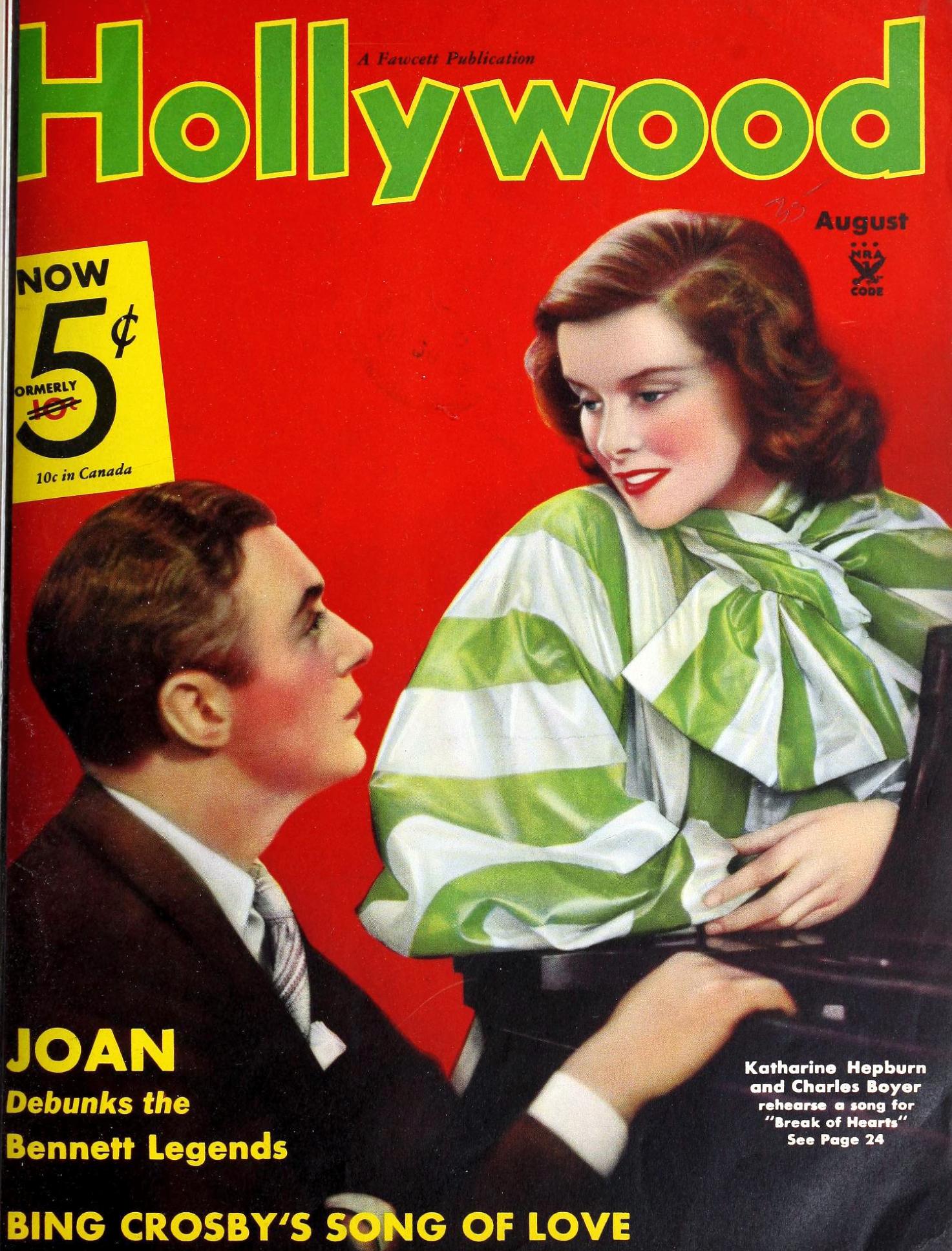 Joan Crawford's posthumous reputation was so dimmed by the book and film "Mommie Dearest" that it's important to remember that many people in the film community genuinely liked Joan (Myrna Loy was a noted defender of her)...and this story, featuring Gail Patrick (not to mention an anecdote involving Lombard herself) shows why: 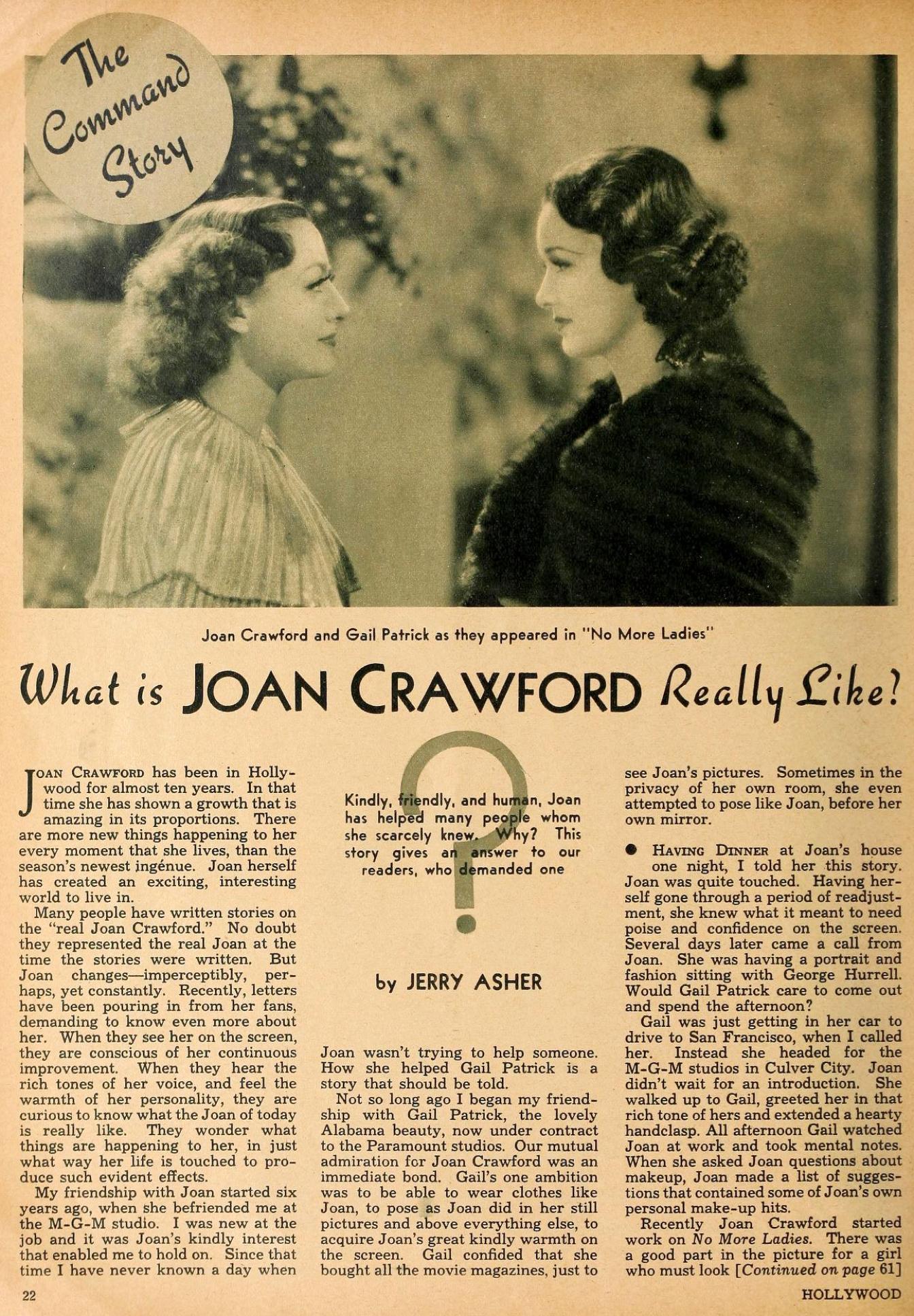 And years before she wrote "The Bennett Playbill," Joan Bennett discusses her illustrious theatrical family -- and reminds us that its heritage includes a number of less-remembered performers on her mother's side: 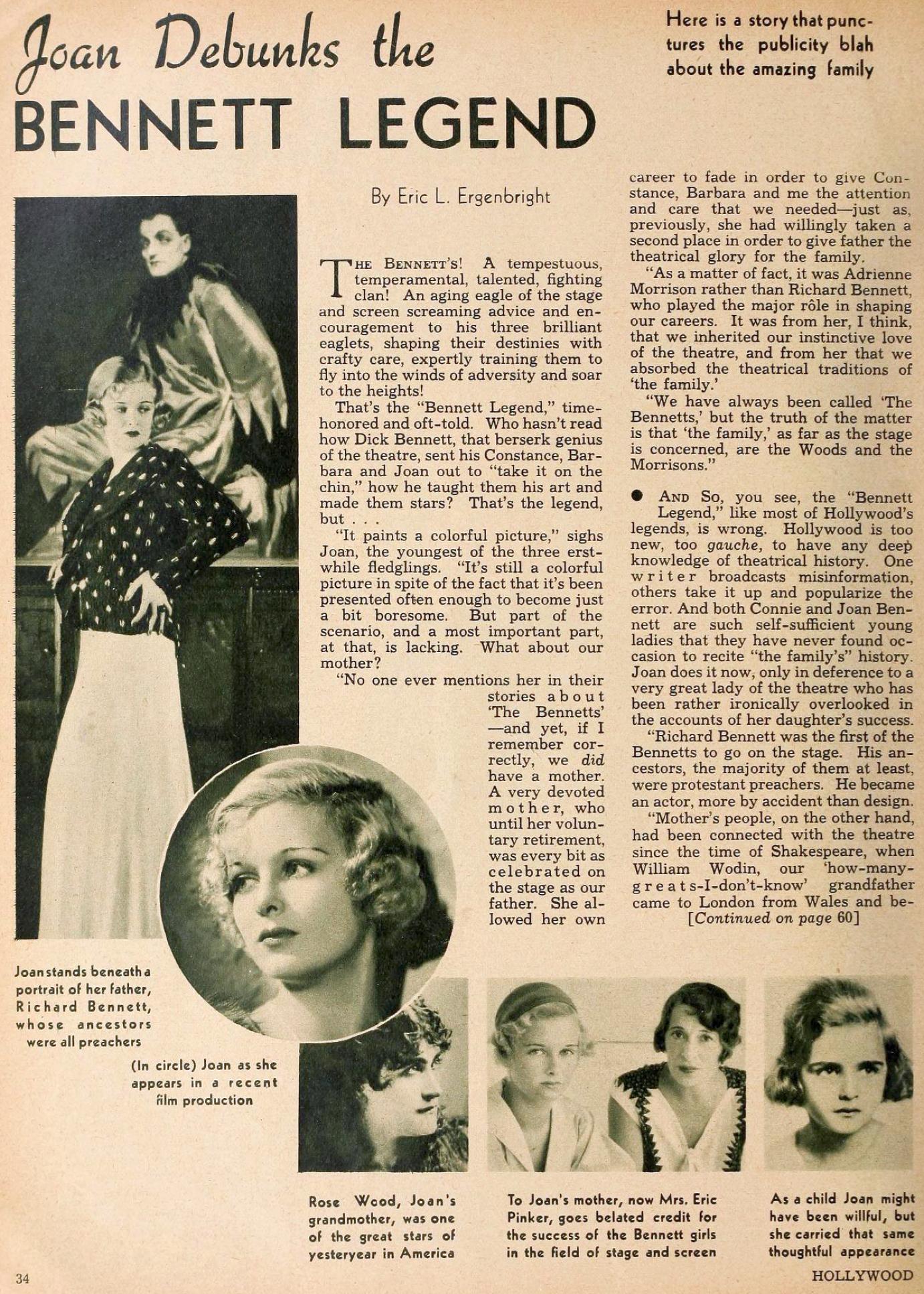