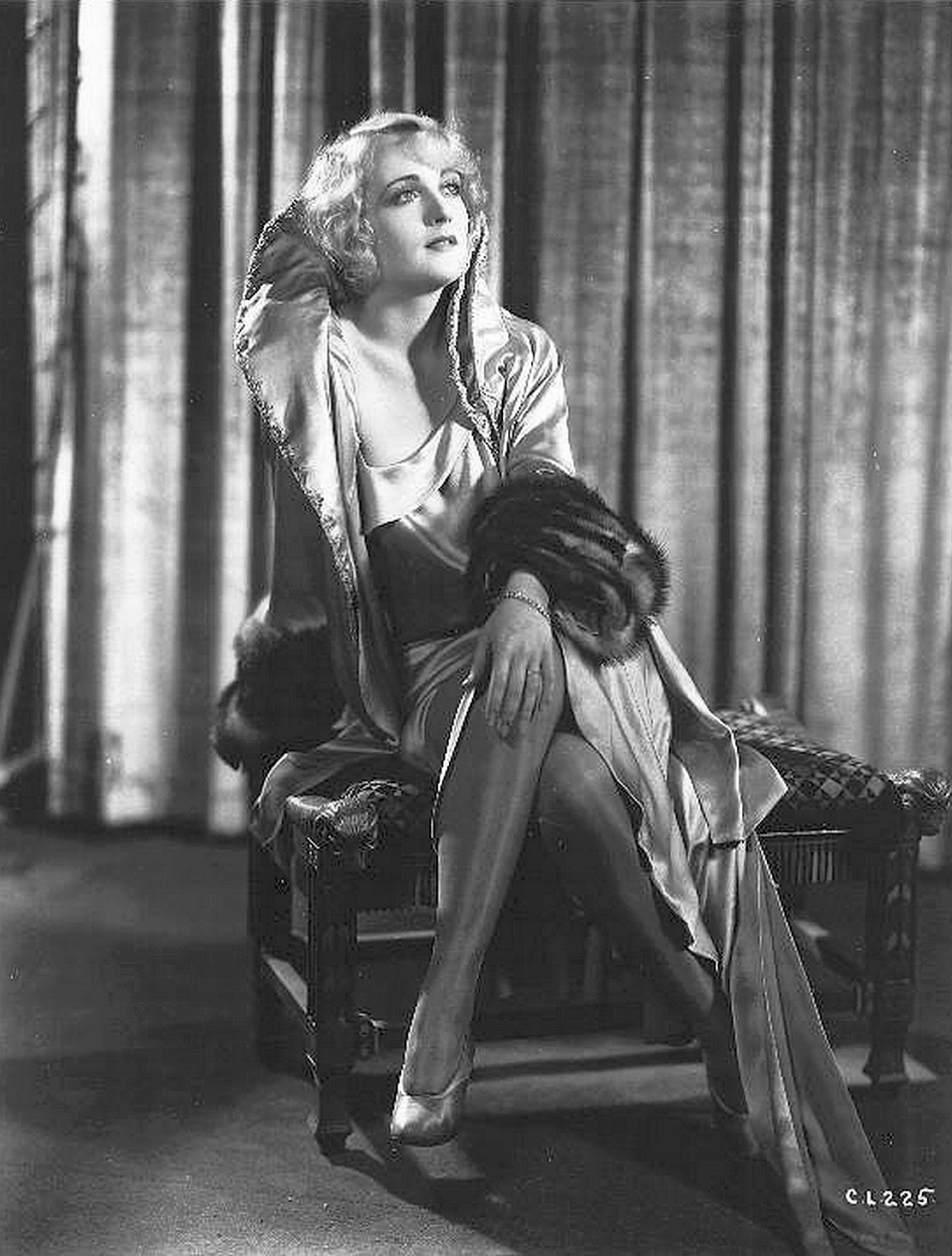 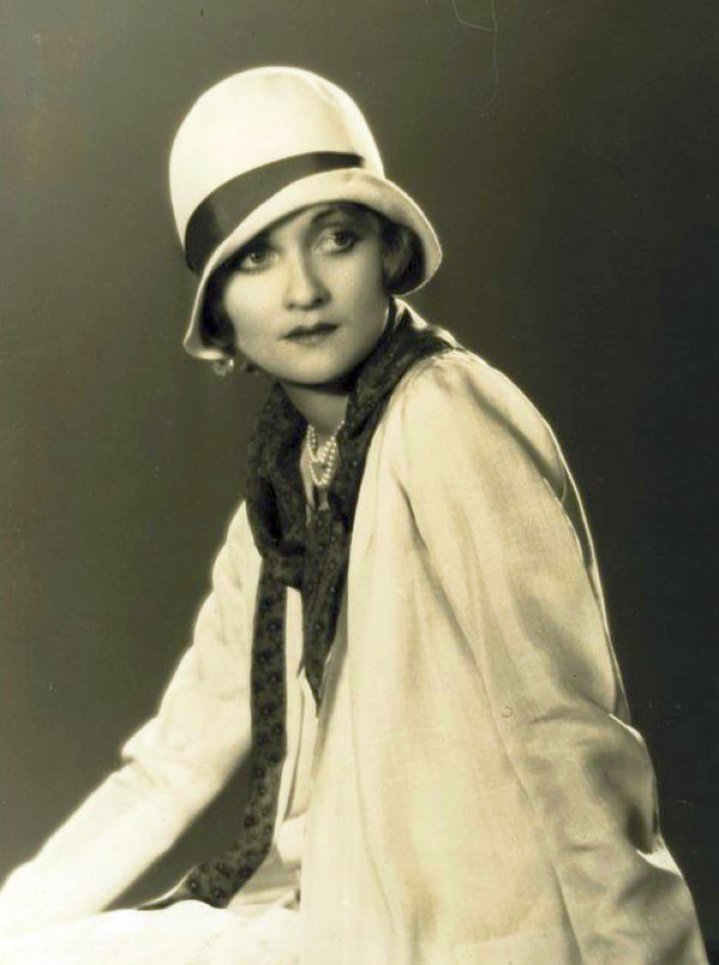 They would be two of Hollywood's most glamorous blondes, actresses whose beauty and fashion sense would come to define chic. And for a brief while, both were employed by the same studio. We're referring to Carole Lombard and Constance Bennett, of course, short-term stablemates at Pathe. In fact, here's a rare ad featuring both on one page, from Motion Picture News of July 6, 1929: 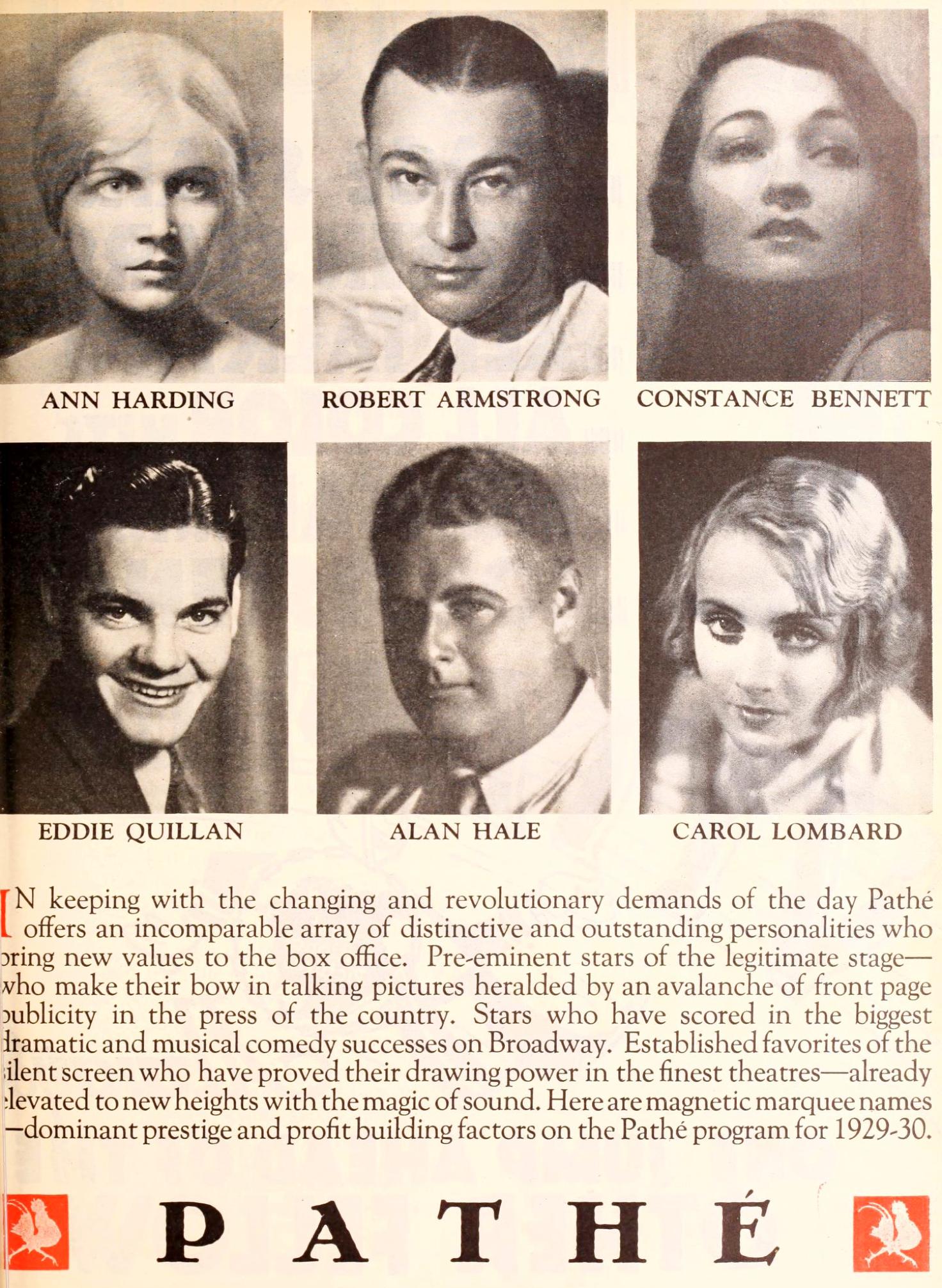 In all honesty, neither was getting the biggest Pathe push. This was the second of a two-page ad from that studio; check out who made the first: 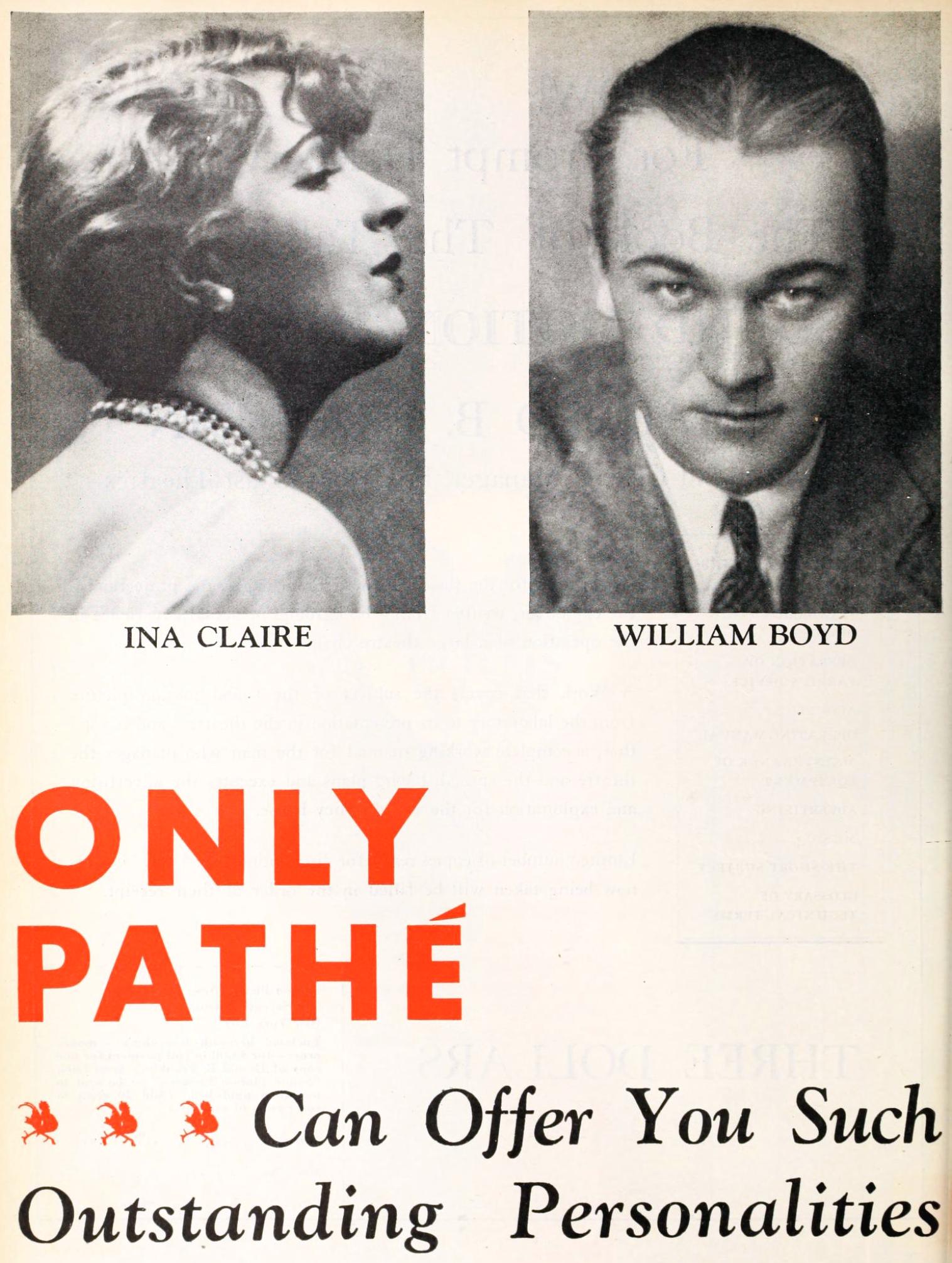 William Boyd was Lombard's leading man in her first all-talkie, "High Voltage," and much later would gain fame for playing Hopalong Cassidy. Ina Claire isn't well remembered today, but had starred on Broadway for much of the '20s and was deemed the epitome of sophistication.

Soon, Bennett -- briefly a star in the mid-1920s before marrying and moving to Paris for a few years -- would get a career boost...and from Pathe's perspective, why not? She was part of theatrical royalty, one of the three daughters of acclaimed actor Richard Bennett. (Youngest sister Joan had made her film debut in the 1928 Pathe film "Power," where both she and Lombard had small parts.) Connie was perceived as such a sure thing that she apparently was given some power over the roster, and supposedly by the fall of '29, she'd persuaded studio officials to terminate the contracts of fellow blondes Lombard and Diane Ellis (a supporting player).

Both Lombard and Ellis would land at Paramount by the spring of 1930, although Ellis became ill while honeymooning in India that December and died there.

This issue of Motion Picture News also has some reporting on Pathe's plans for the upcoming production year: 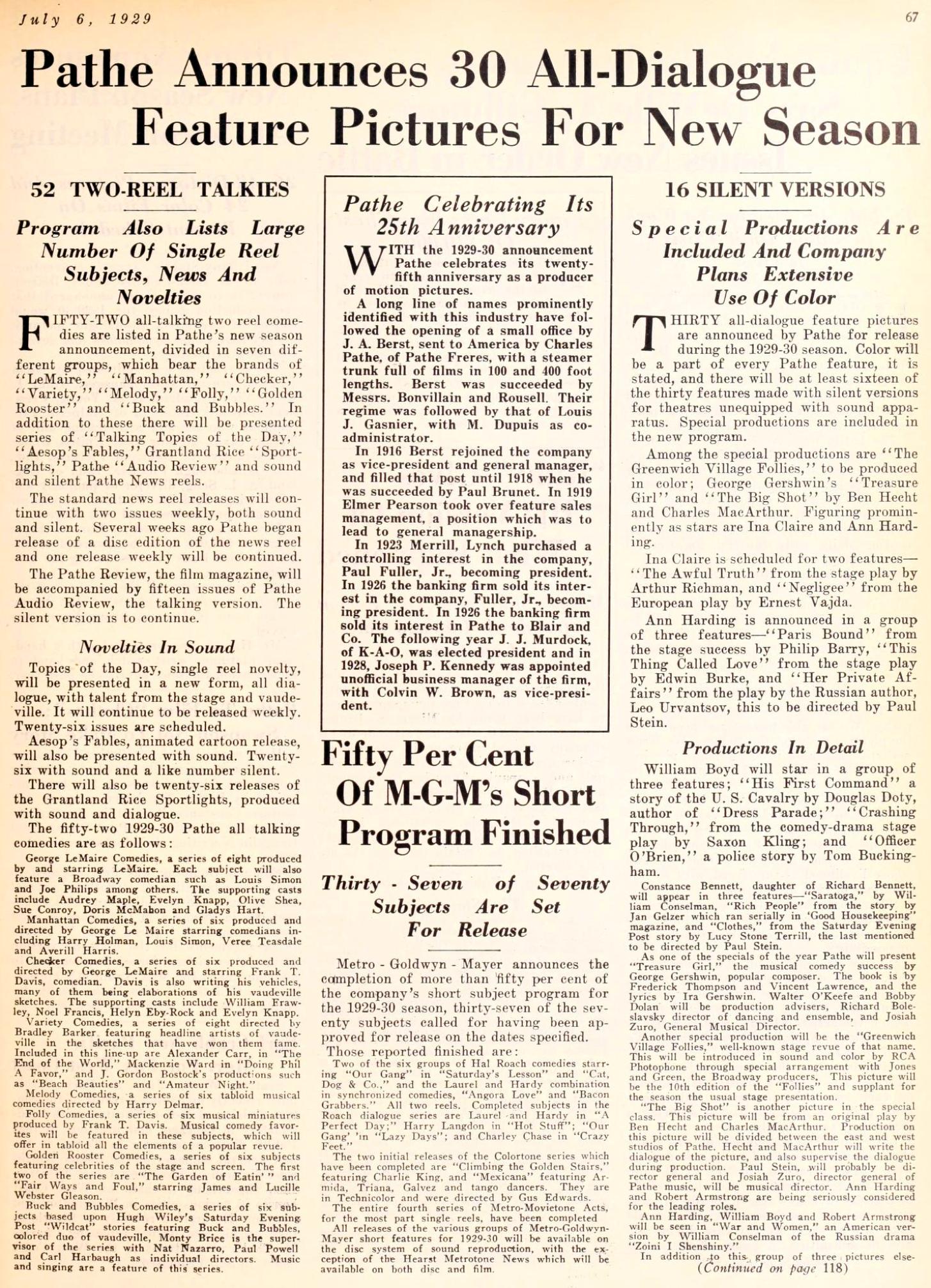 Specifically, here's what the trade paper wrote about its planned features:

Lombard indeed appeared with Robert Armstrong in "Big News" and "The Racketeer," but what of this film called "Parachute"? The Internet Movie Database lists no movie from that year by that title (Warners made a 1932 film called "Parachute Jumper" which apparently is unrelated), and it's not part of the entries for Armstrong or director Tay Garnett.

The summer of '29 found the film industry in flux, as this editorial in that July 6 issue makes clear: 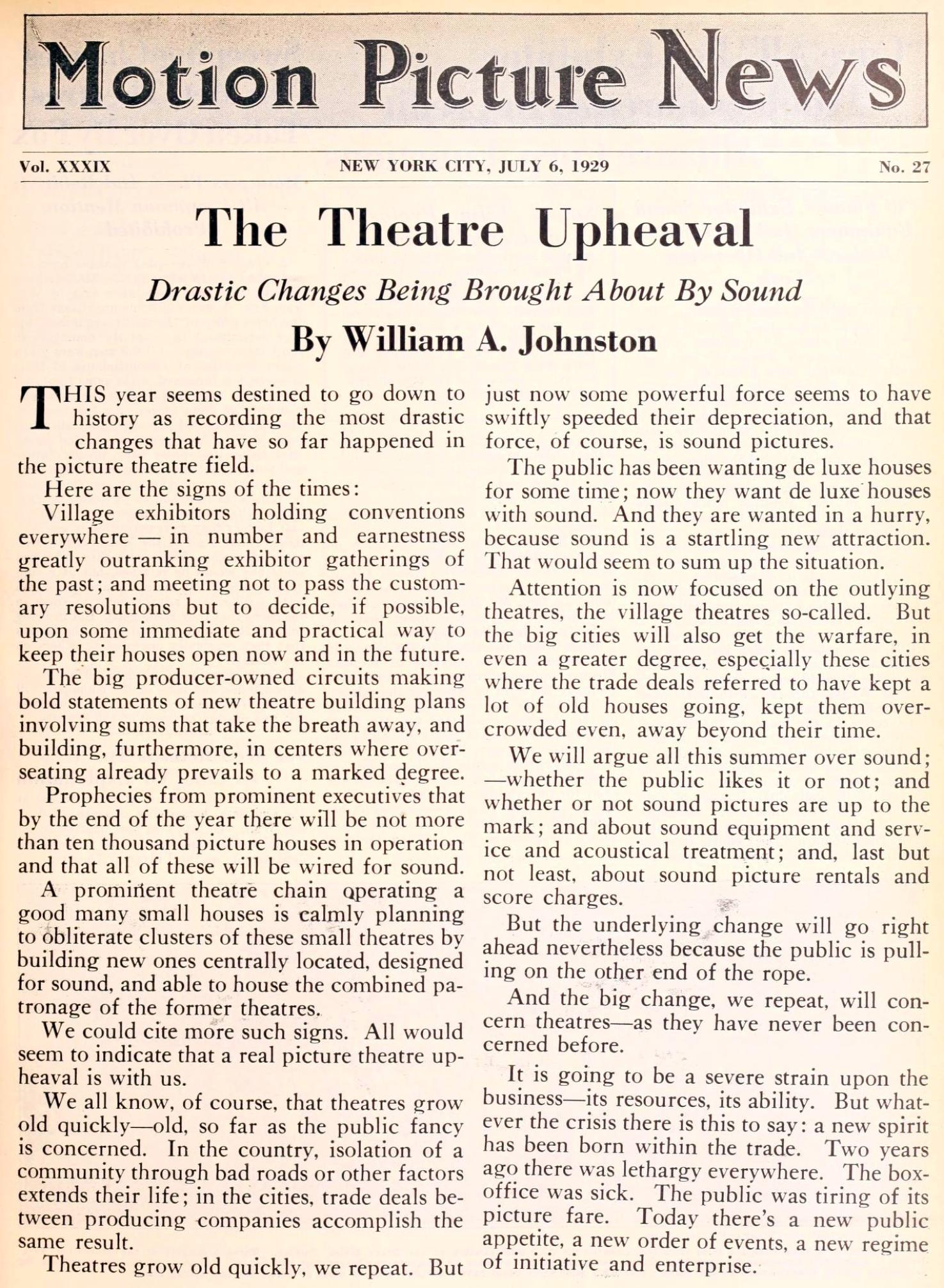 While that two-page ad was all Pathe had to offer in that issue, a new rival -- flush with cash and ambition -- made its presence known in preceding pages. The newly-formed Radio or RKO studio, which ultimately would assimilate Pathe, provided Motion Picture News with 48 exquisite pages... 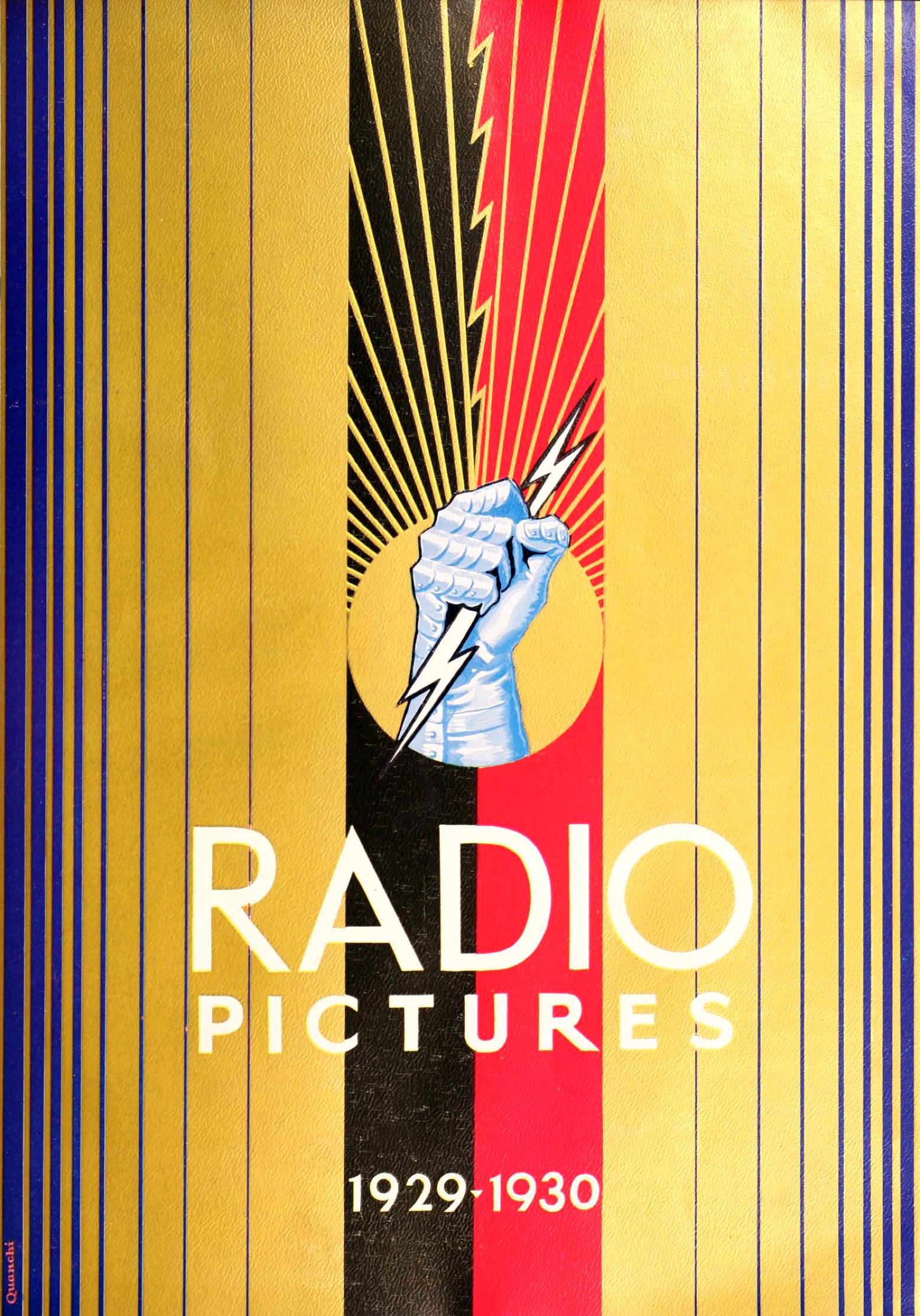 ...including many with dazzling full-color art. No wonder its symbol was a titan: 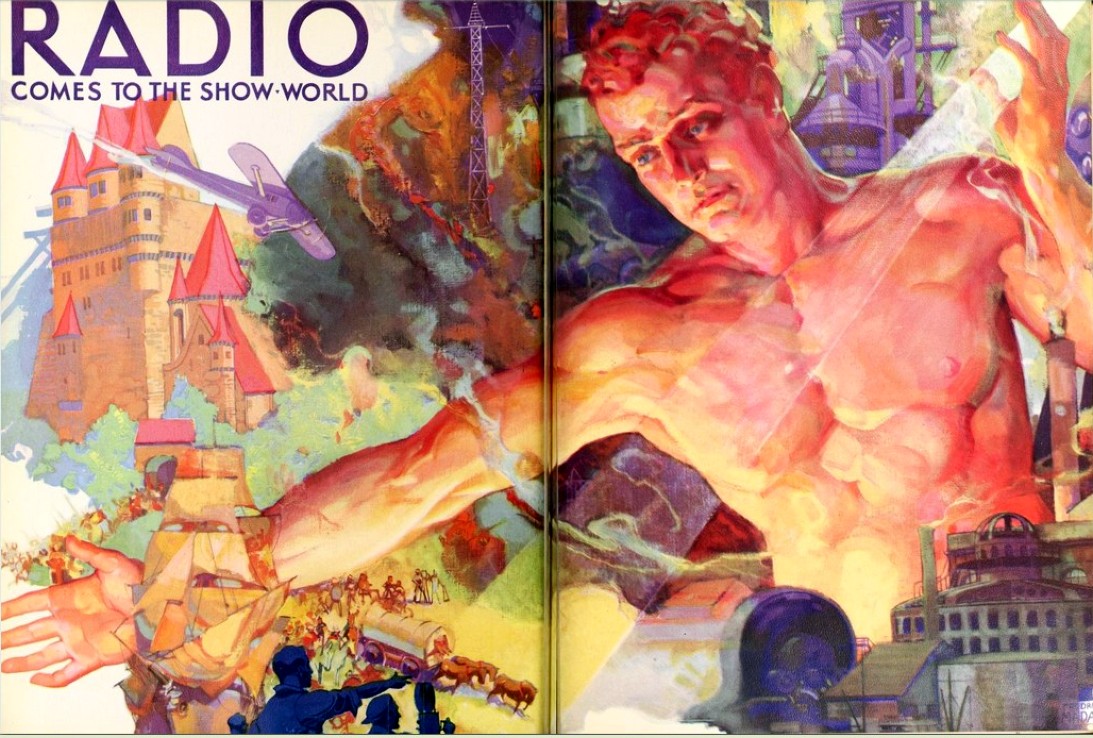 We'll show you a few of these, if only to delight in the ability of the Media History Digital Library to render these long-ago pages in their original color. First, three pages promoting "Rio Rita," a musical with some two-strip Technicolor sequences that turned out to be RKO's first major hit: 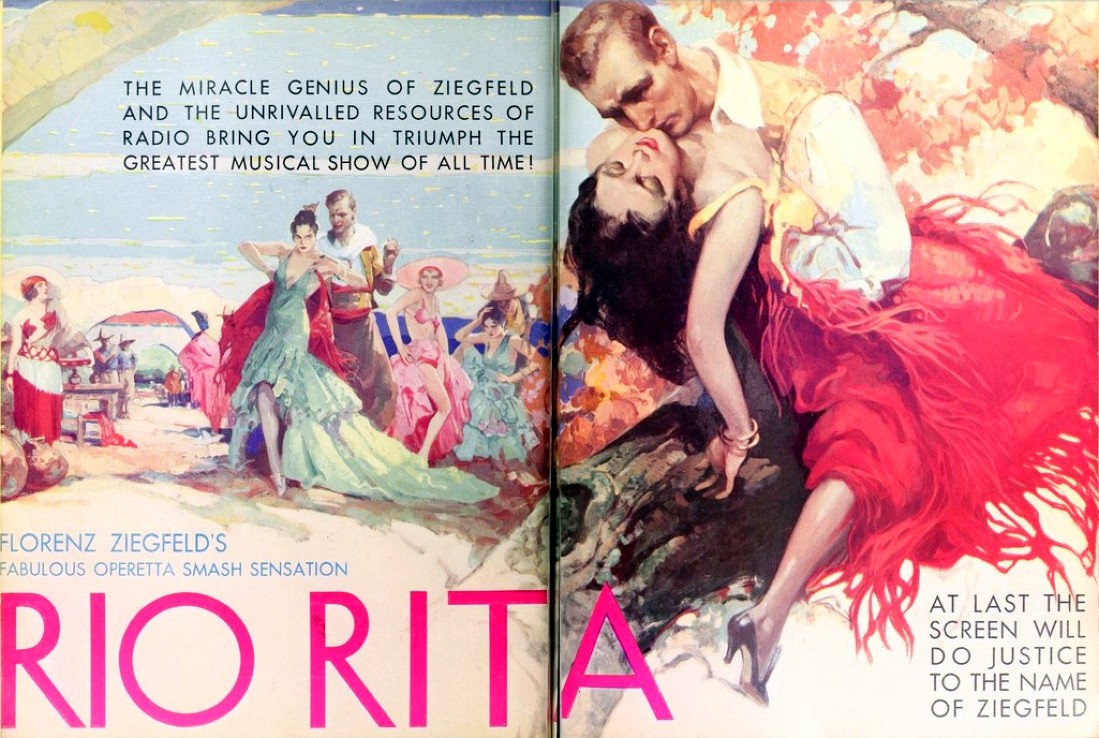 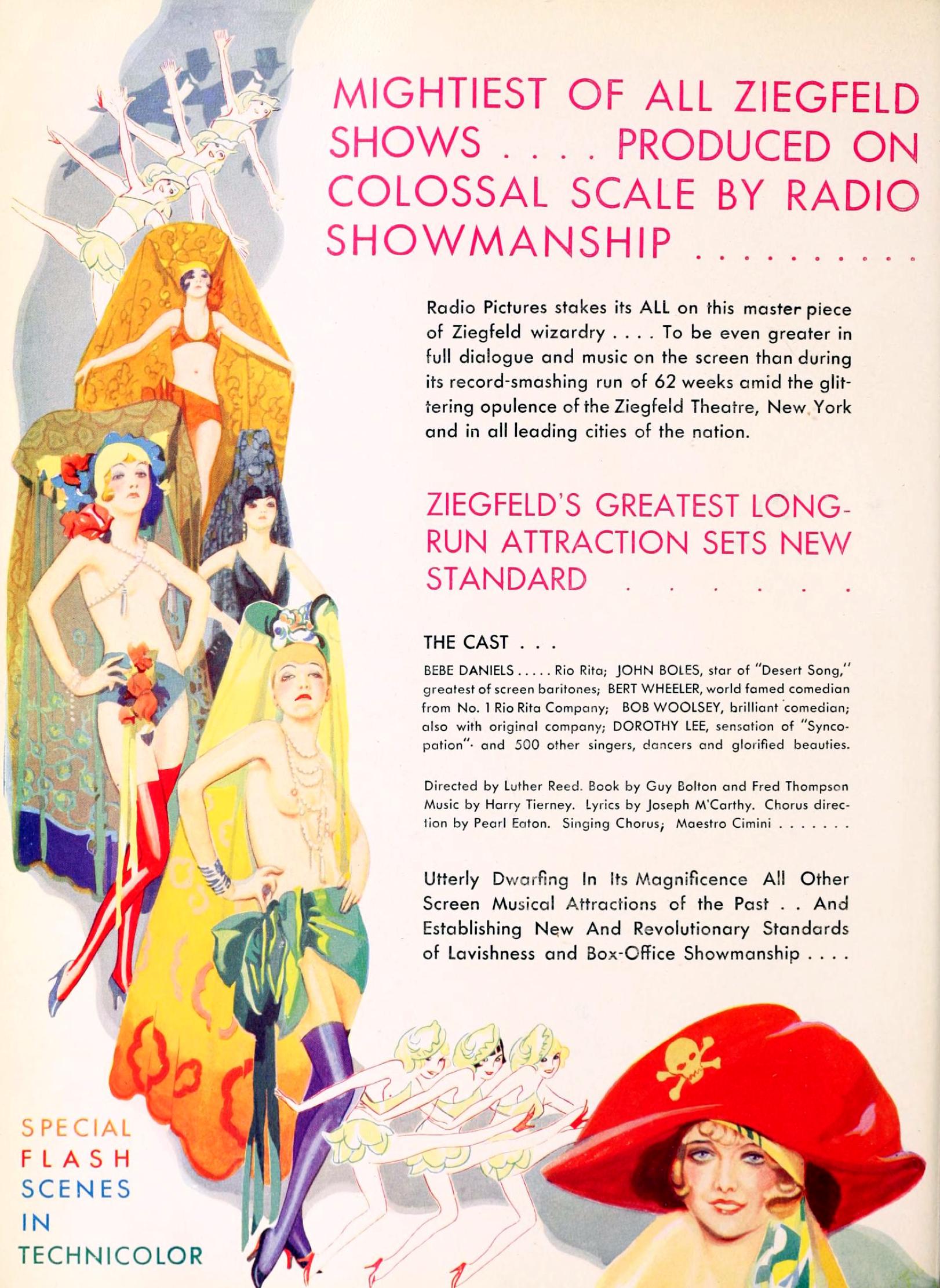 Here's RKO hyping Rudy Vallee, who in his own egotistical way was the Kanye West of his day. (Perhaps Kanye ultimately will redeem himself as a comedic character actor; we can always hope.) 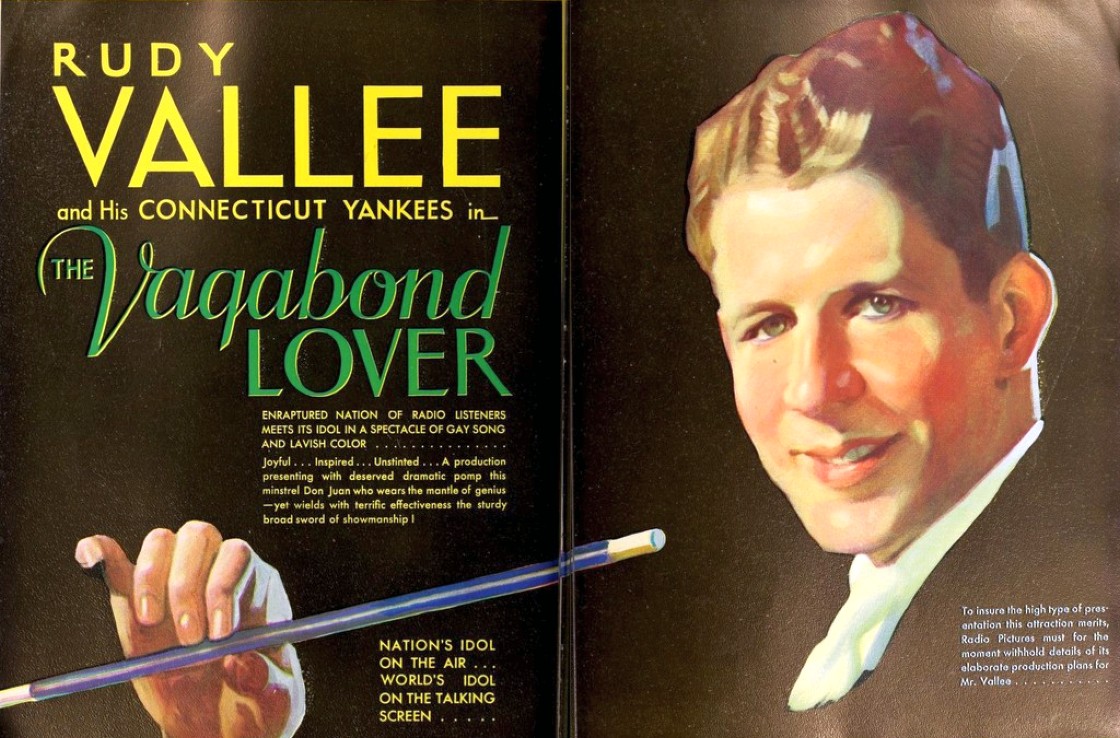 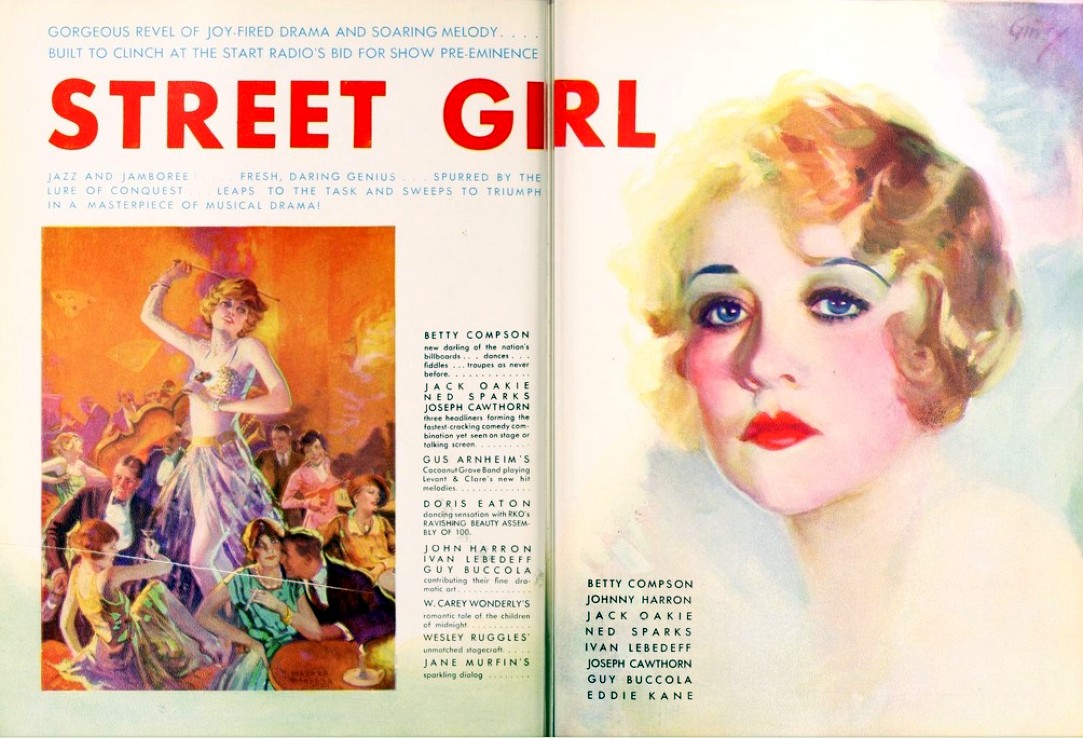 This Ben Hecht story was projected to be filmed early in 1930, but it was shelved until spring 1934, when Warners acquired the rights and made it with Warren William, Mary Astor and Ginger Rogers: 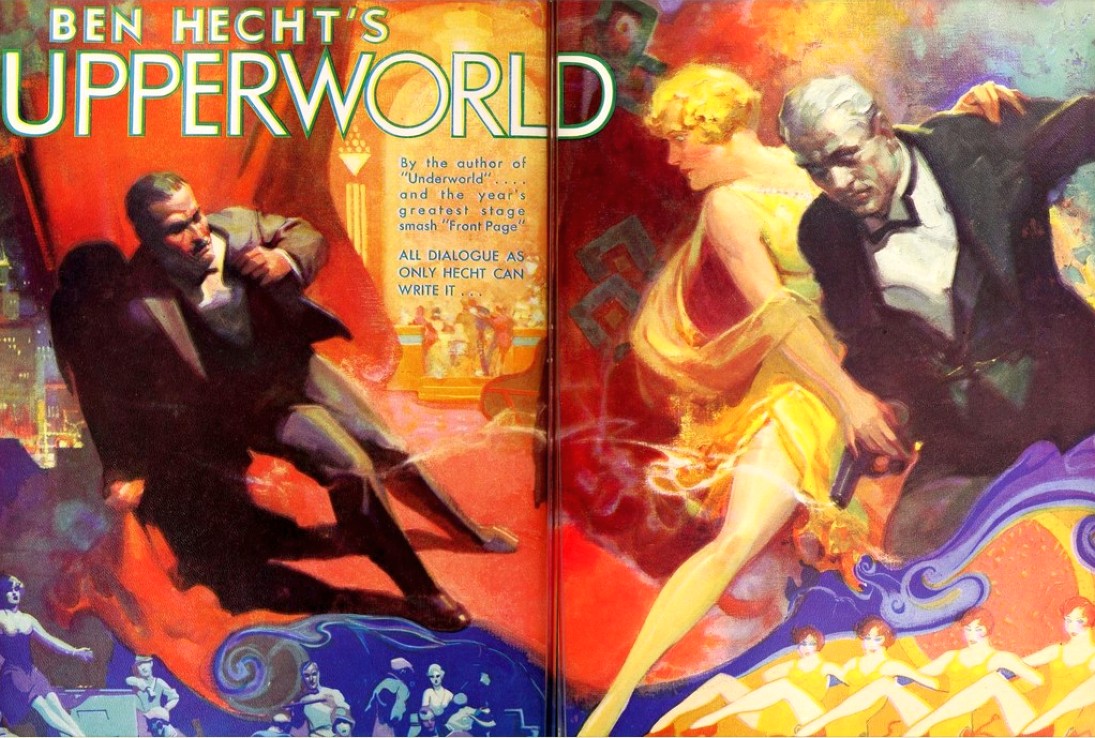 Here are some other ads publicizing upcoming productions: 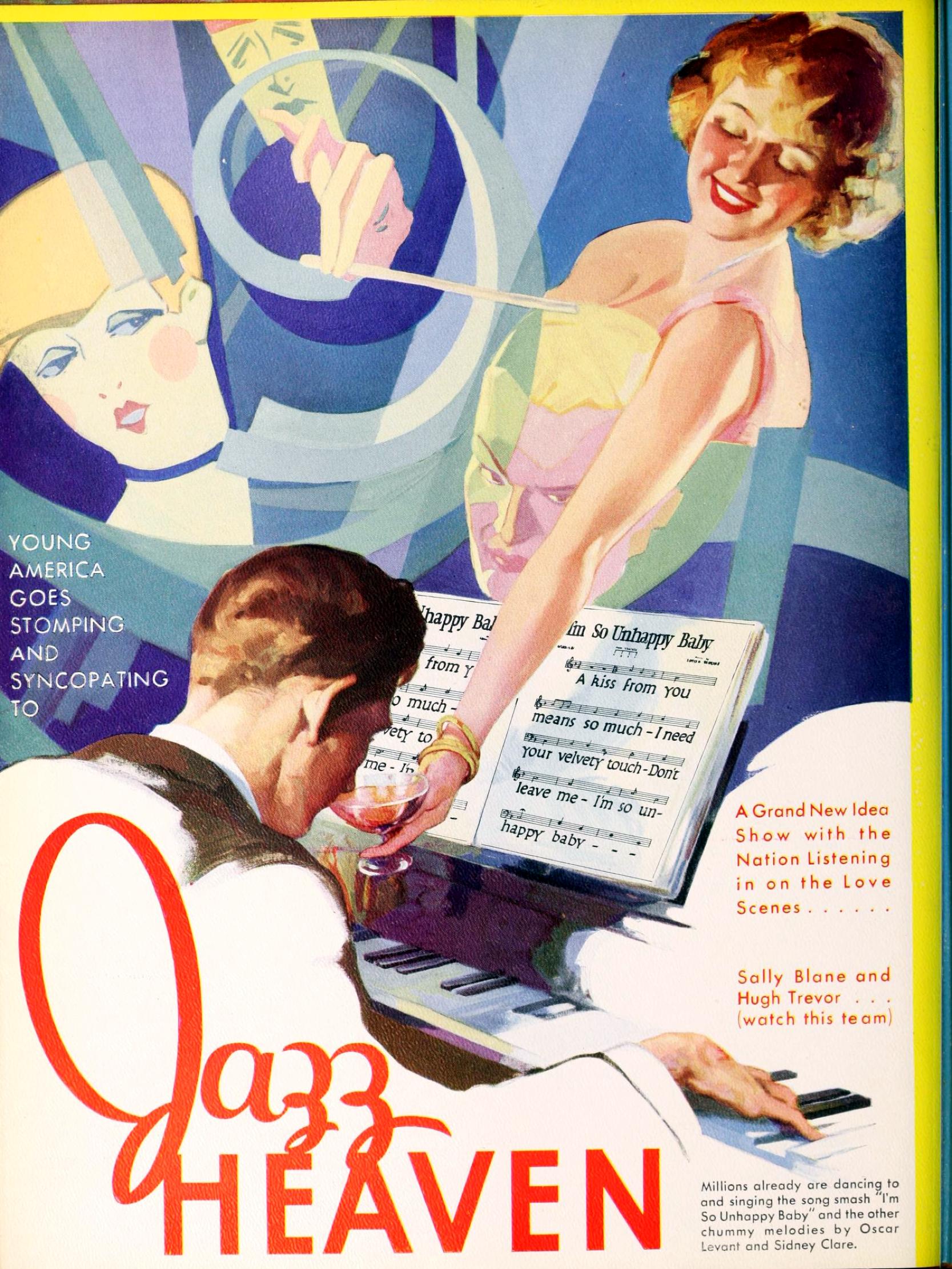 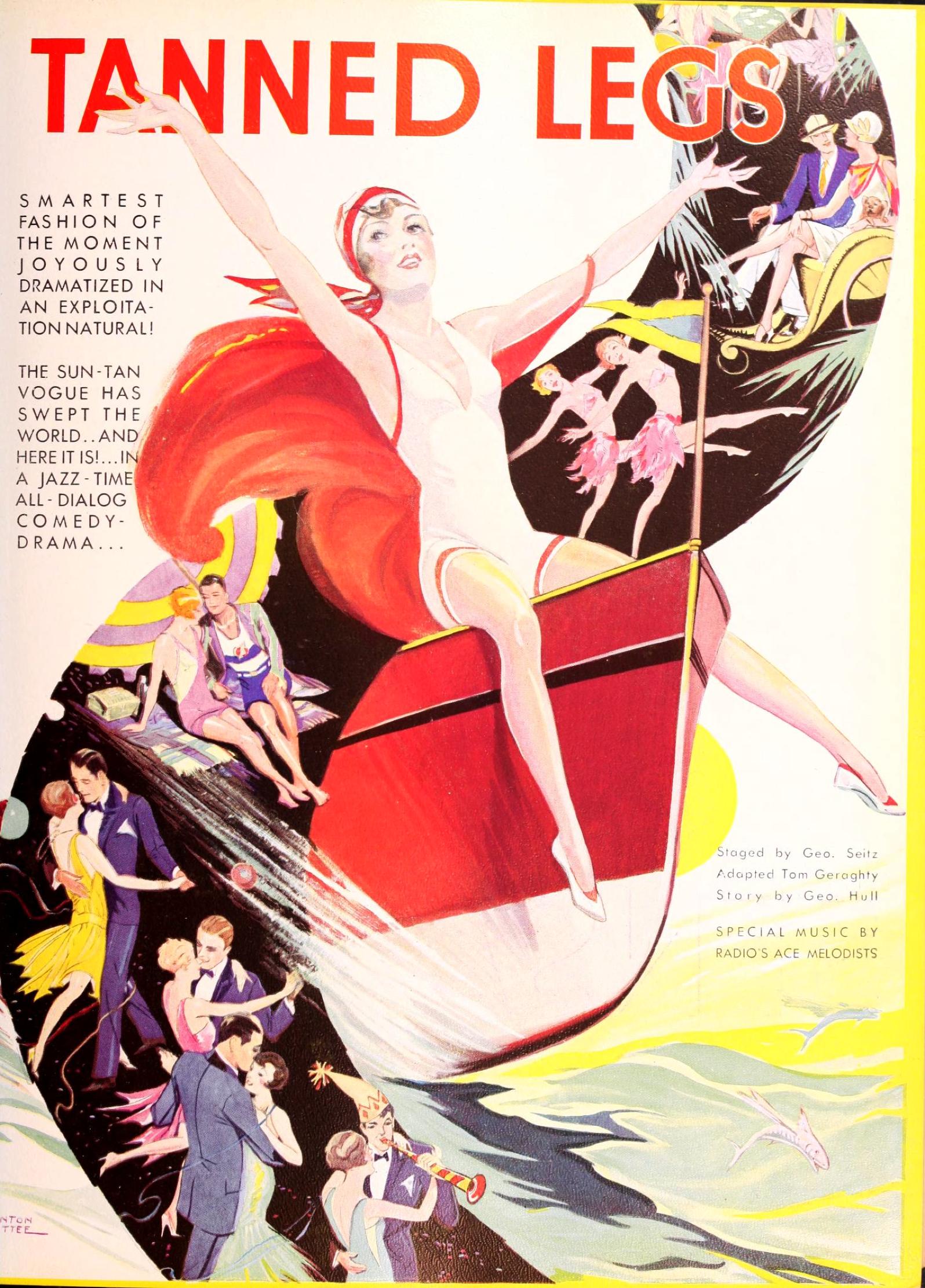 The star of these Mickey McGuire two-reelers is still with us, and still working...it's Mickey Rooney, of course: 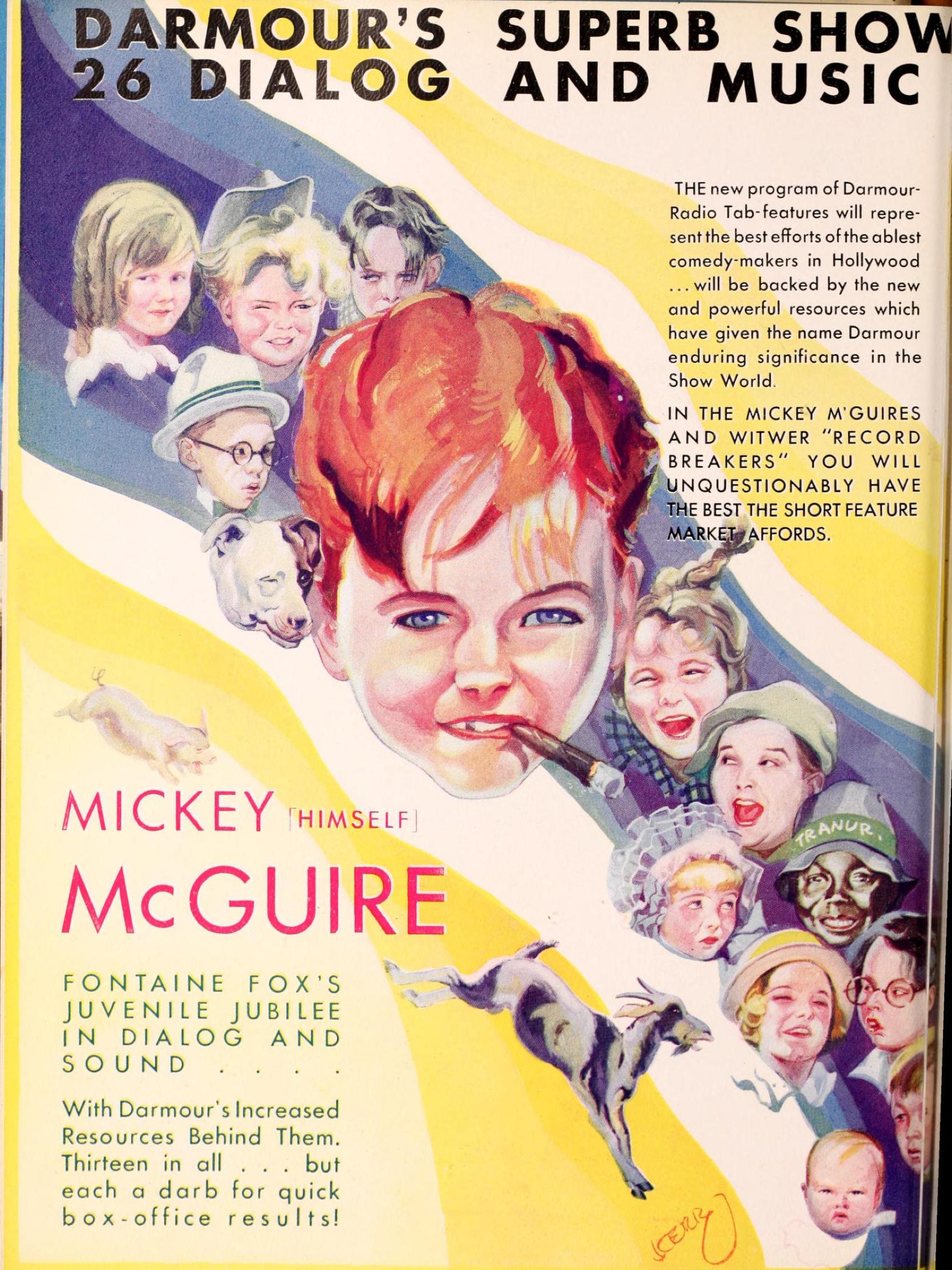 And since the transition to talkies wasn't yet complete, a company named "Radio" also released silent versions of many of its pics for exhibitors who had yet to install sound: 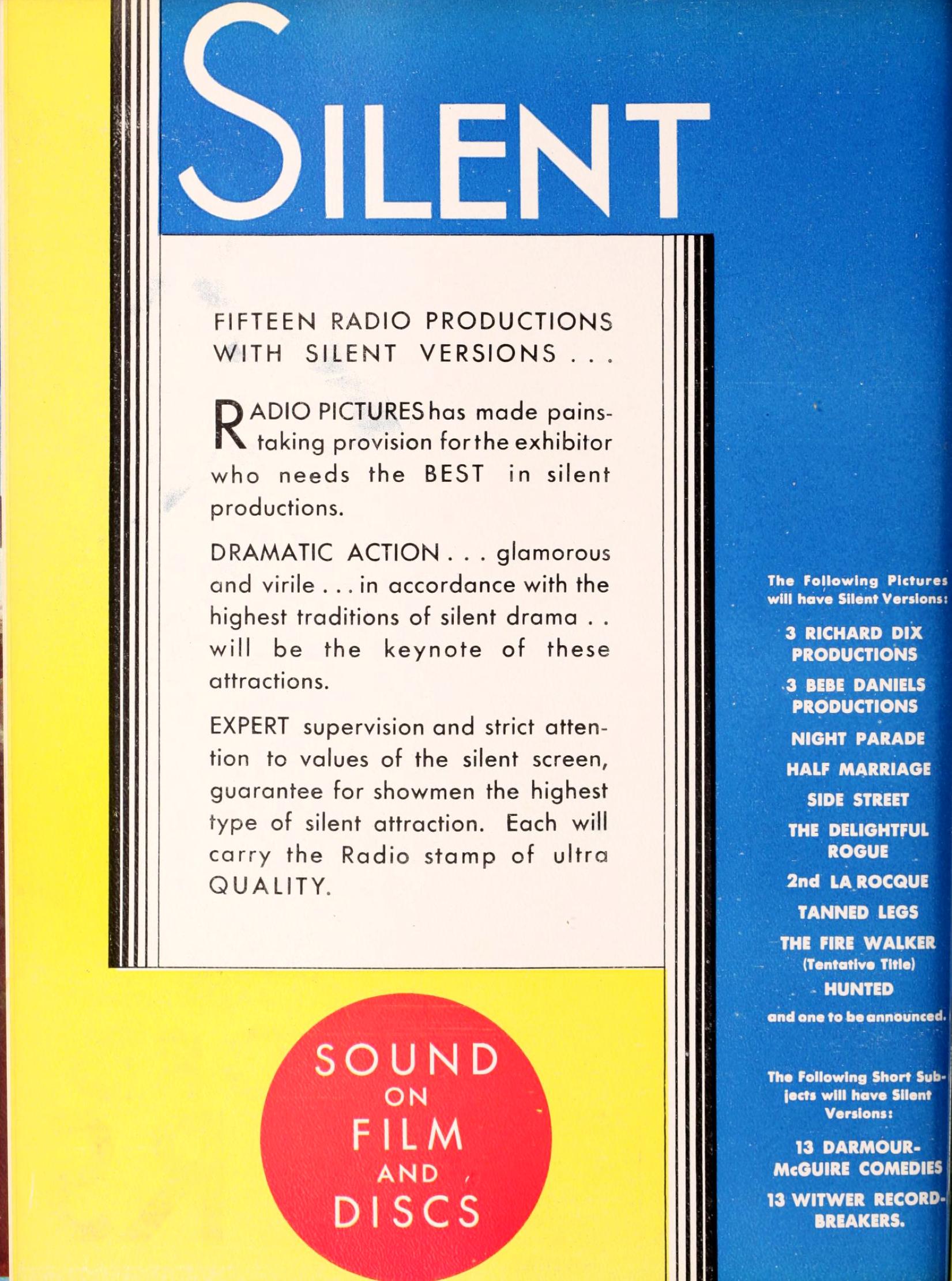 And speaking of sound, in between RKO's 48 pages and Pathe's two was this ad promoting a book to aid people in the industry about this momentous change: 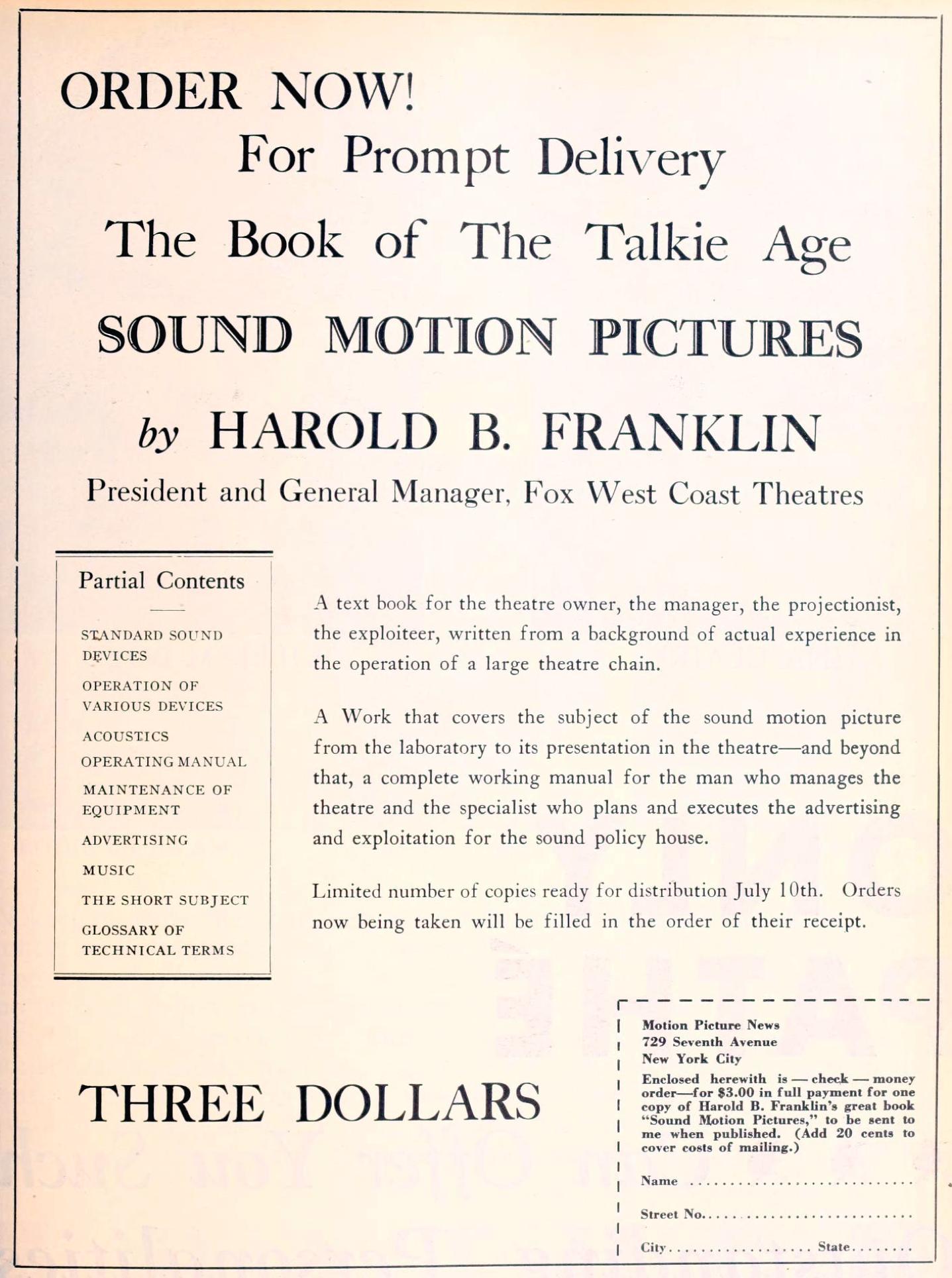 "Looks interesting," you're thinking, "but it's probably long out of print." Well, not really. The book, "Sound Motion Pictures," has been digitized and is available online at https://archive.org/details/soundmotionpictu00haro.
Collapse