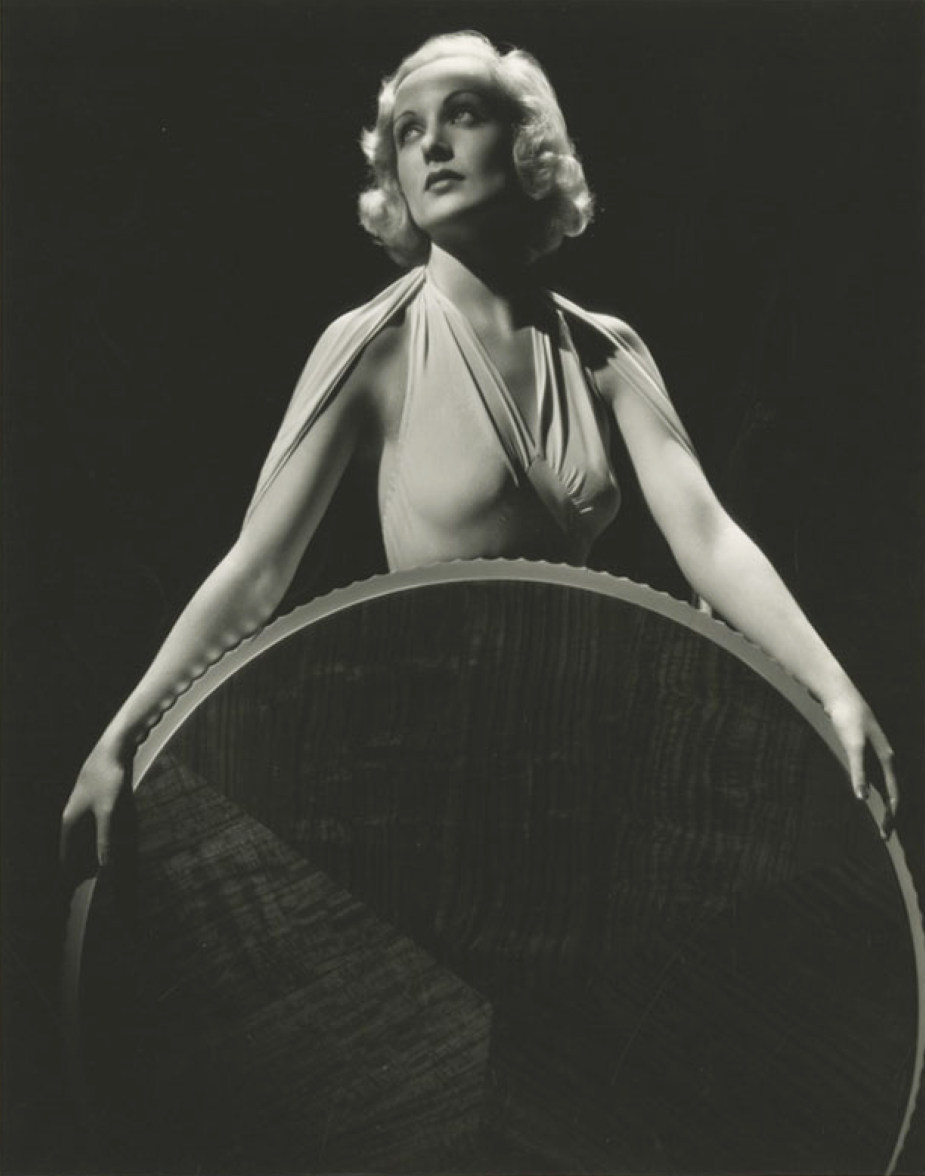 Some of you may recall a monthly feature at this site called "Looking Back," which compiled several Carole Lombard-related news items (culled from newspapers and daily trade journals) from a particular month. It began in January 2011, looking back at Carole in January 1932, then continued month-by-month through an October 2012 review of October 1933.

But in November 2012 (specifically a year and a week ago today), I tore a ligament in my right knee and was away from my computer for several weeks. For that and other reasons, I chose to put "Looking Back" on the shelf. Now that we're back in November, I've decided to revive the feature...now reviewing 80 years to the month rather than 79 (it's a more appropriate number, to boot).

Career-wise, the big news for Lombard that month was the release of her latest film, "White Woman," an ad for which is seen in the Nov. 23, 1933 Altoona (Pa.) Mirror:

Earlier in the month, it had premiered in Los Angeles, and according to the Nov. 15 Motion Picture Daily, it was doing middling business. (In contrast, look to the numbers being posted for Mae West's latest vehicle, "I'm No Angel," despite being in its third week with substantially higher ticket prices.)

Three days later, it was reviewed in two of the New York-based trades -- Motion Picture Daily... 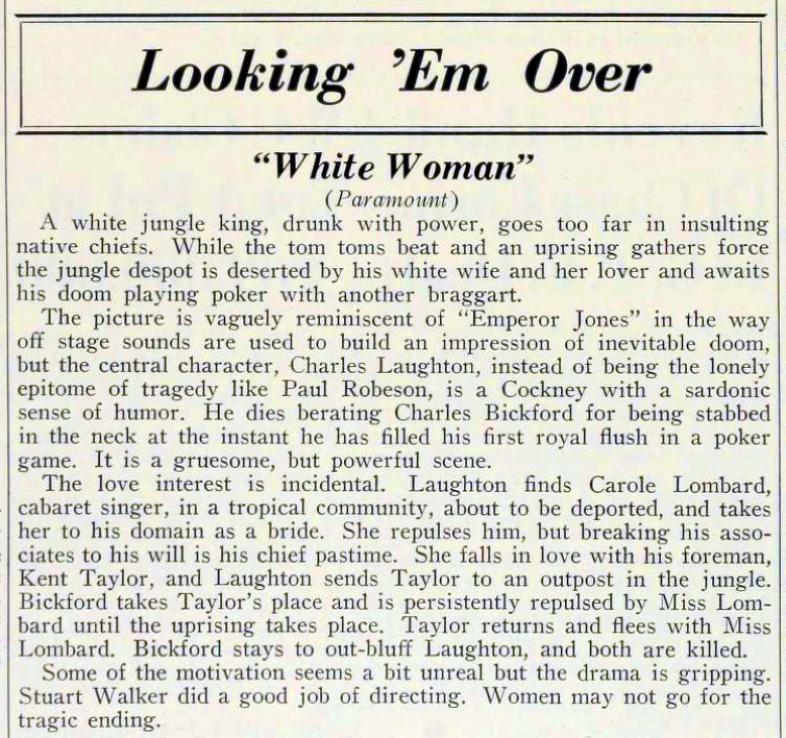 Several of Lombard's earlier films still were making the rounds, such as "Supernatural," shown in the Syracuse Herald on Nov. 19 (look in the lower-left and upper-righthand corners): 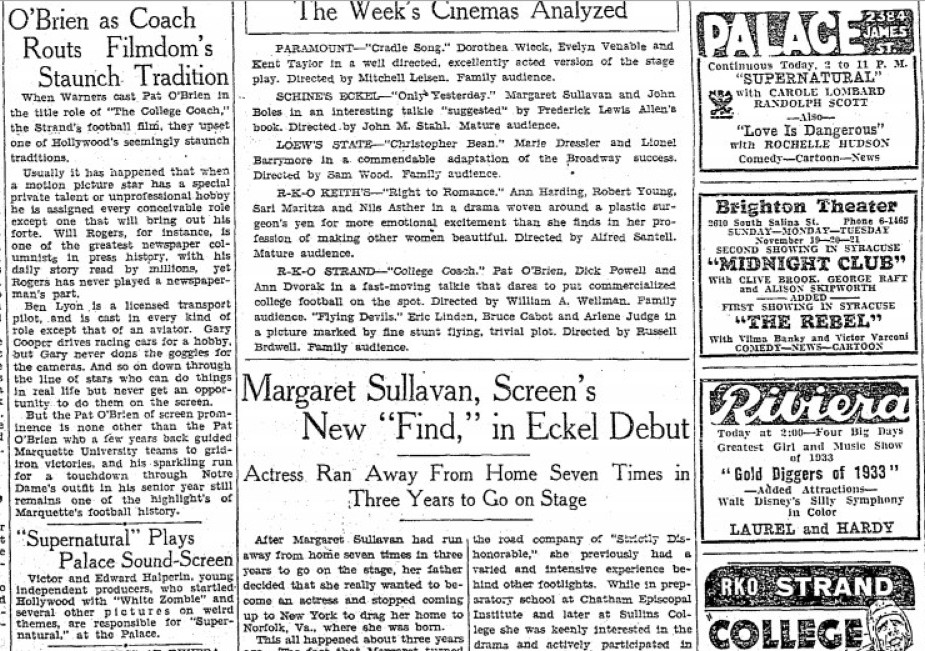 On Nov. 15, the Paris (Texas) News ran an ad for "The Eagle And The Hawk" -- also note the "colored balcony," a reminder of what black audiences had to endure in the days of segregation:

Nationally, the big story was the repeal of Prohibition, the 18th Amendment, which began in January 1920. Congress proposed its repeal via passing the 21st Amendment in February 1933, shortly before Franklin Delano Roosevelt -- a supporter of repeal -- assumed the presidency. Beginning in April, state ratifying conventions (not state legislatures) passed the amendment; this was done by Congress to circumvent the still-potent temperance lobby, and remains the only constitutional amendment enacted in this manner.

At the start of November, 29 of the required 36 states (with Alaska and Hawaii later added as states, the number now would be 37) had passed repeal, and four more would do so by month's end. (Ratification was completed Dec. 5.) California had voted by referendum in late June to support repeal, and empower the legislature to regulate the sale by retail stores if and when "federal prohibition becomes inoperative." By mid-November, it was deemed inoperative, and the sale of regulated alcoholic beverages became legal.

Hollywood, as you might guess, was almost unanimously in favor of repeal, and was delighted it no longer had to head to Mexico to drink legally. John Barleycorn's triumph was noted by syndicated columnist Dan Thomas in the Nov. 21 Burlington (N.C.) Daily Times News: 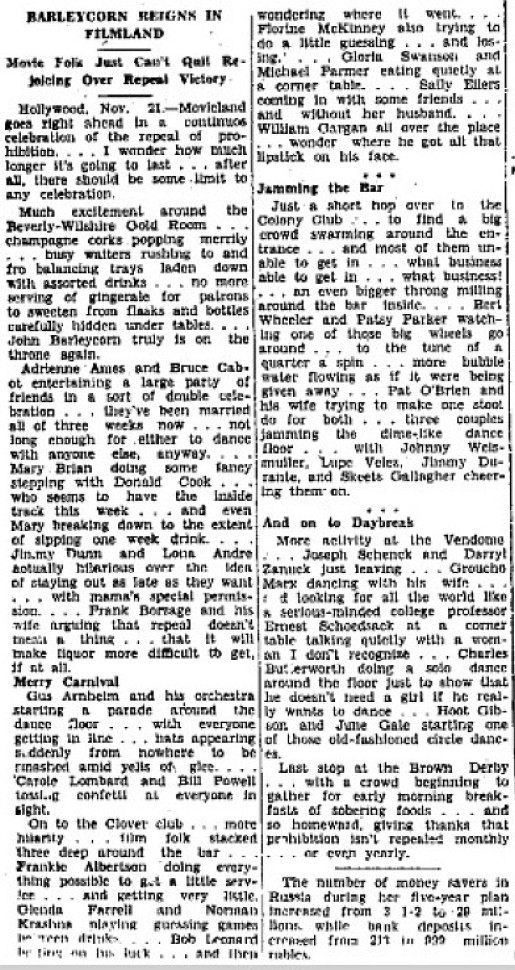 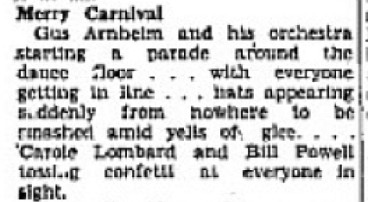 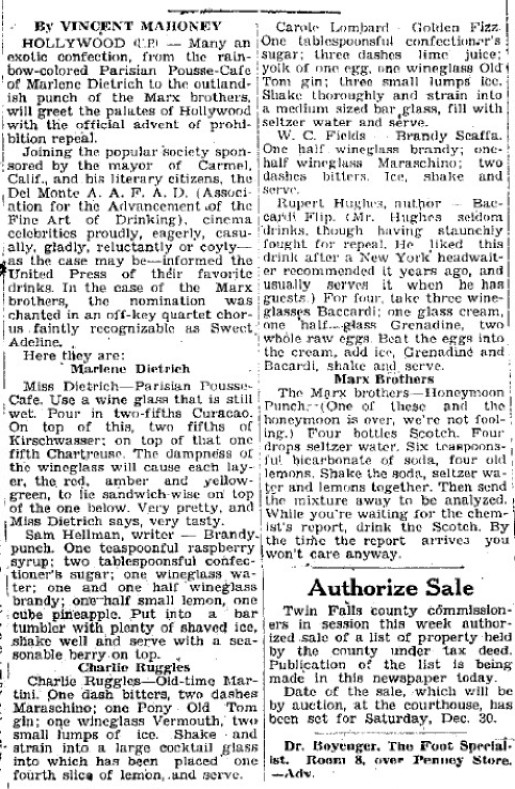 Yet another Lombard recipe.

Memories of the Lindbergh kidnapping in March 1932 resonated with the American public for a while, so naturally there was some reluctance from the film industry to use child abduction as a plot point for movies. By the fall of 1933, that apparently was changing, according to the San Antonio Express of Nov. 5: 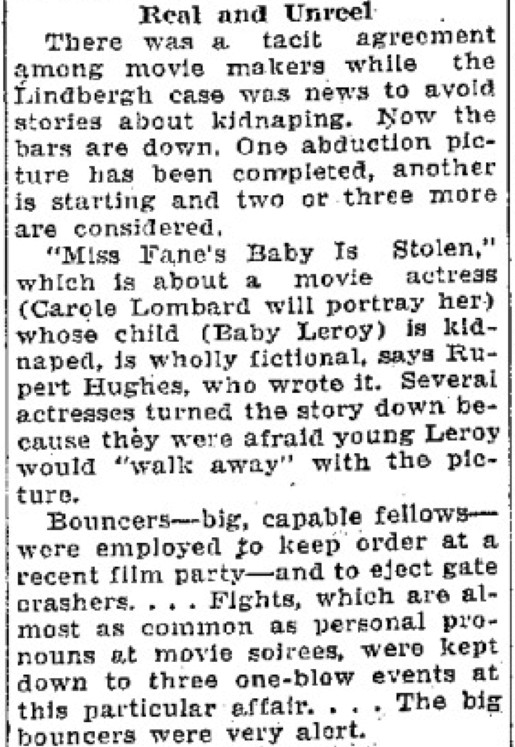 But Lombard, in such a film? Not so fast. This is from the Nov. 19 Oakland Tribune...

German import Dorothea Wieck would end up with the role.

Carole, when not recuperating from illness, was wrapped up in her new house (was this the one in Beverly Hills or her better-known residence on Hollywood Boulevard?). So was the decorator, former film star William Haines, according to Hearst columnist Louella Parsons in the Nov. 26 San Antonio Light: 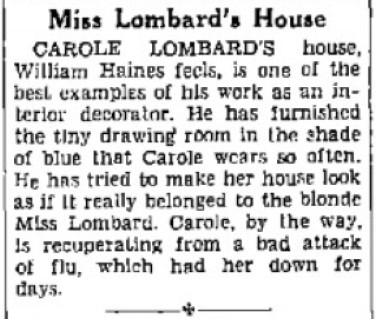 Readers of the Nov. 9 Hagerstown (Md.) Morning Herald also got a house update...although given the curious layout, it may have taken them a few extra seconds to get from point A to point B: 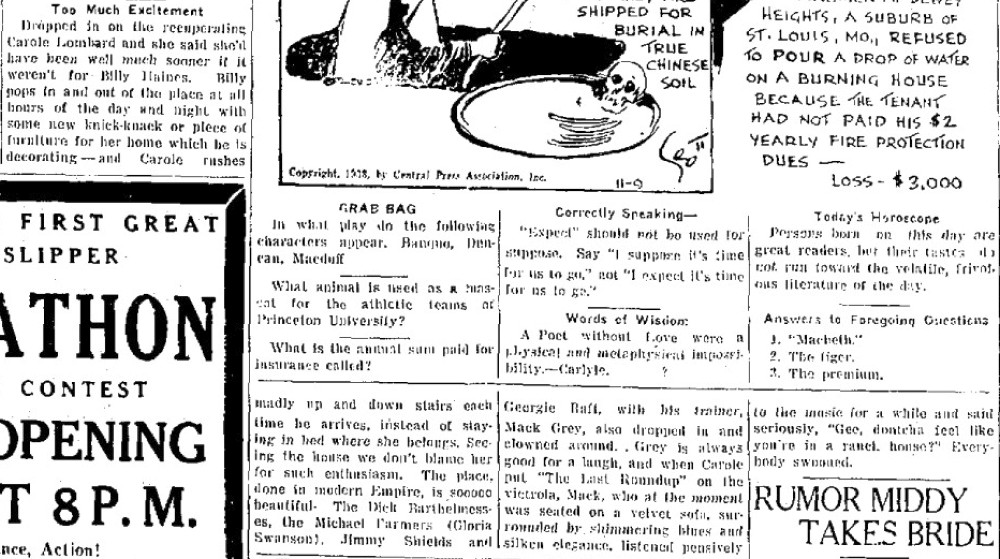 Now to fashion, and Lombard was featured in a few pictorials that month, such as this from the Nov. 27 Massillon (Ohio) Evening Independent: 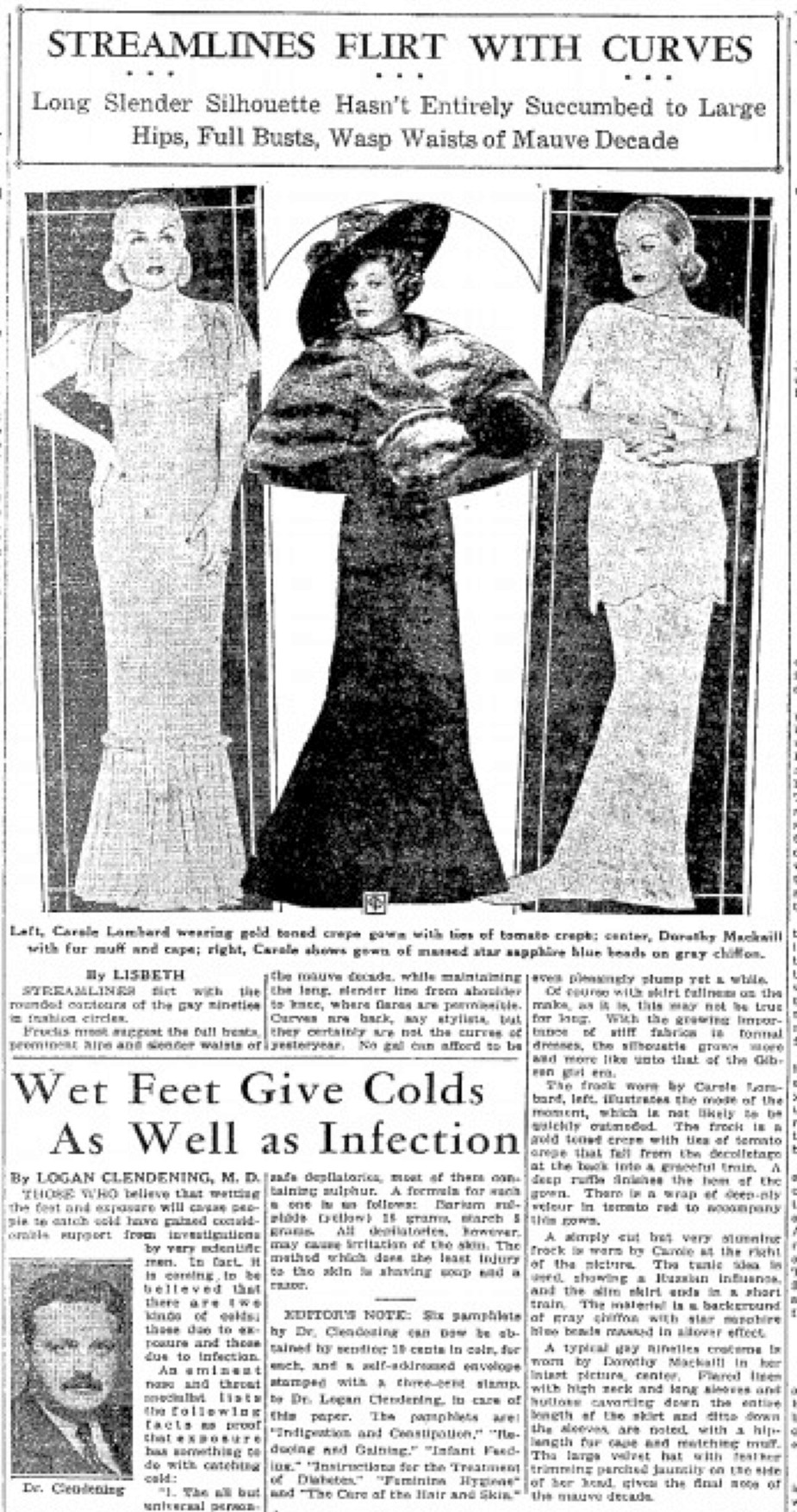 Then this, from the Nov. 29 Middletown (N.Y.) Times Herald and the same writer of the Stevens Point piece:

Finally, this odd mix of stories from one town -- Sandusky, Ohio, on the shores of Lake Erie, about halfway between Toledo and Cleveland. Carole was to make an appearance there...and so, for that matter, would Kay Francis, Clara Bow, Jean Harlow, Myrna Loy and Joan Crawford. Well, sort of. This story from the Nov. 5 Sandusky Register explains things: 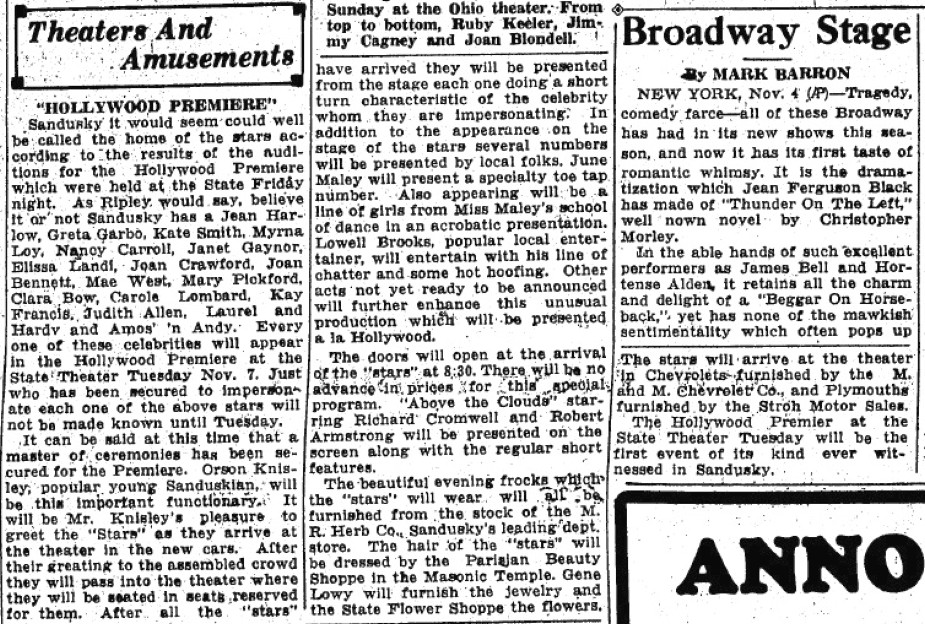 The "rival" Sandusky Star-Journal (both were owned by the same company) provided an update Nov. 7, the day of the event...

...as well as a report on the proceedings the following day: 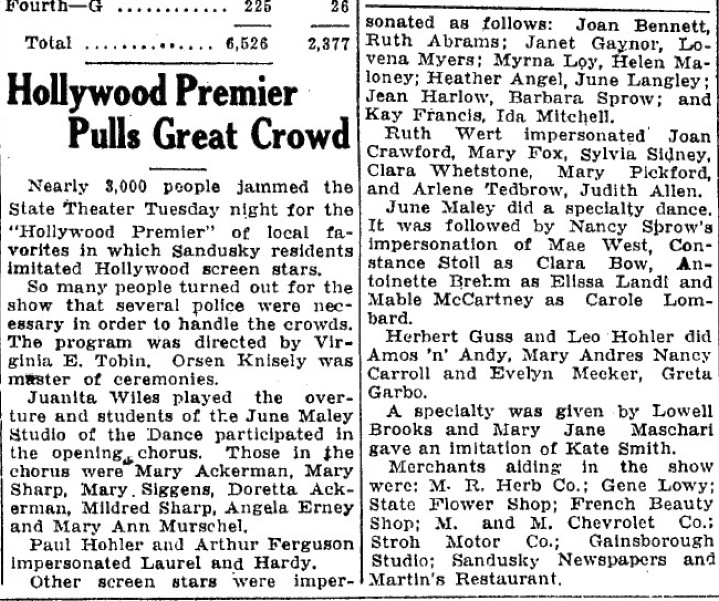 We hope Mable enjoyed portraying Carole Lombard...and wish we had photos or more detailed descriptions of the event. (Just how would Lombard have been portrayed in November 1933, roughly half a year before "Twentieth Century" would change the public's perception of her?) Also, try to imagine something similar happening today, when movies are more about franchises and CGI effects than about stars.
Collapse