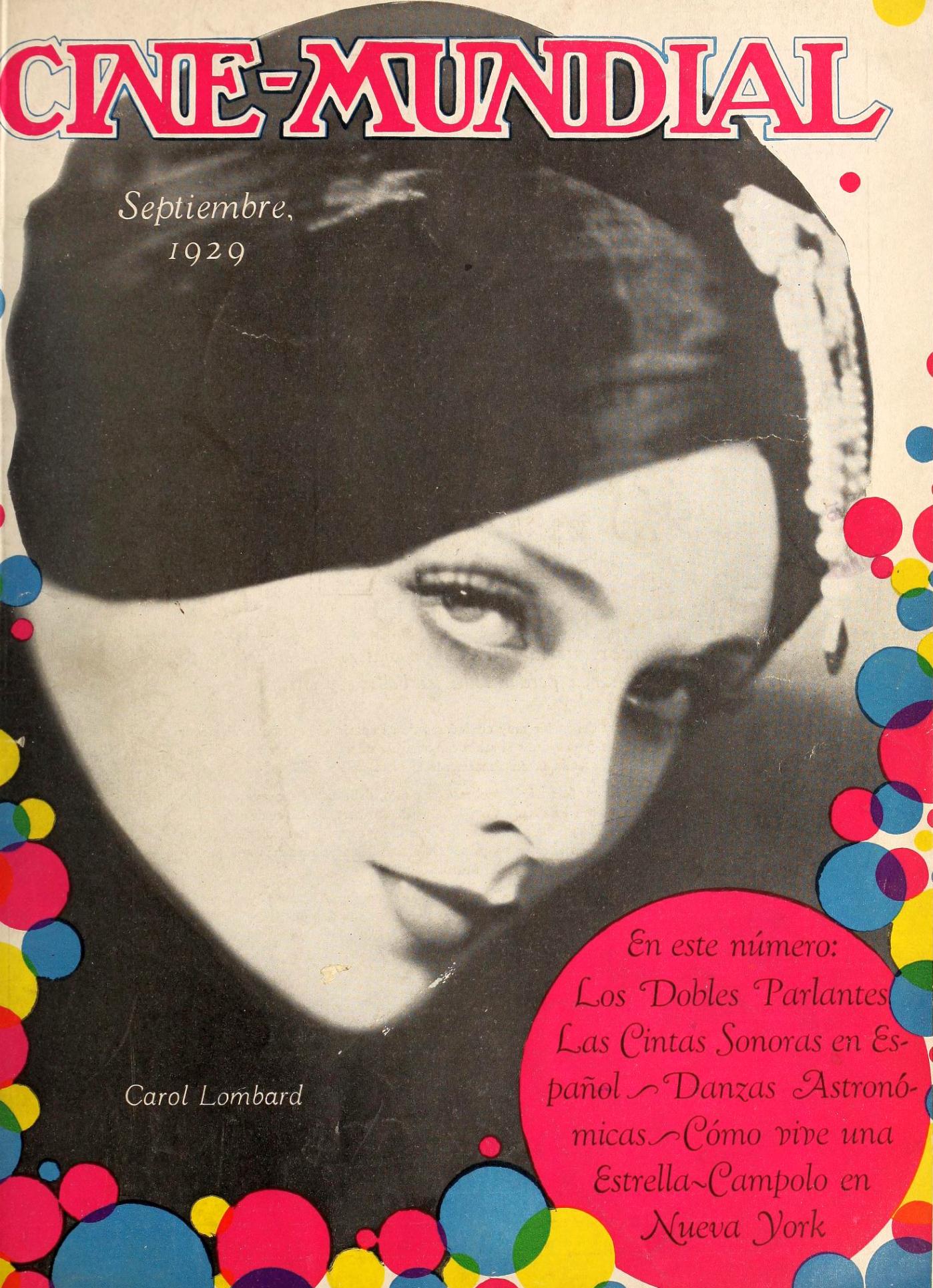 Some years ago, we ran an image of that September 1929 Carole Lombard cover of the Spanish-language magazine Cine-Mundial when it was up for auction. Now, not only can you see the cover (her first for the magazine), but the entire issue; that's because 30 years of its run, from 1916 to 1946, has been digitized and put online at the Media History Digital Library, another boon for classic movie research. Here's another Carole cover, from December 1935: 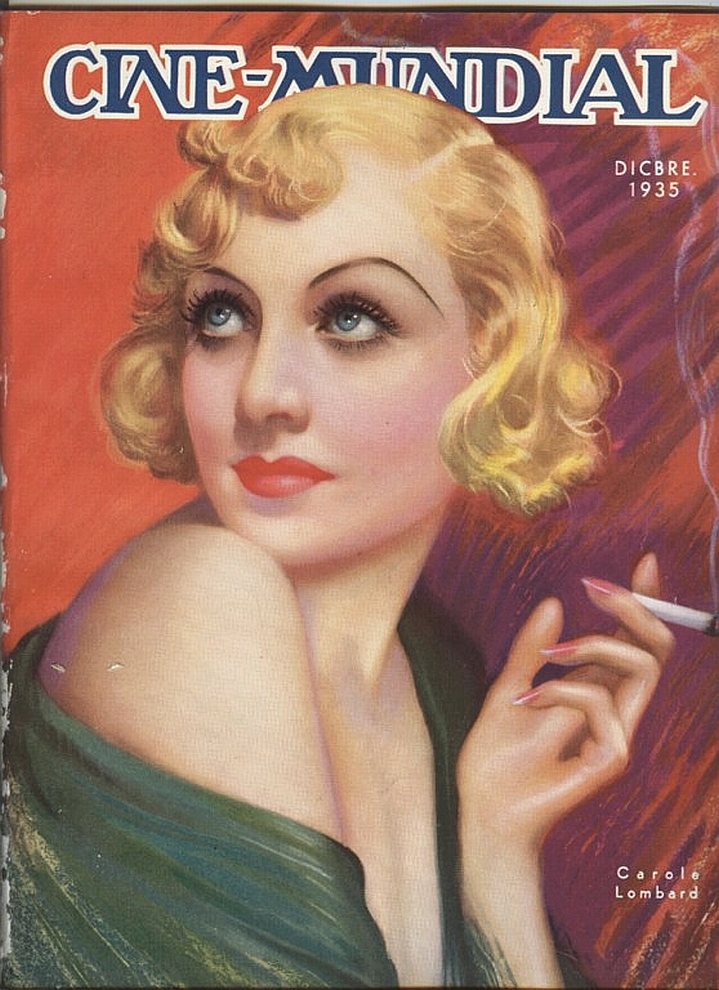 At first glance, Cine-Mundial appears merely to be a Spanish-language equivalent of American fan magazines, but that would be giving it short shrift. It was founded by New York-based Chalmers Publishing, whose publications included the industry trade paper Moving Picture World -- and Cine-Mundial had multiple functions, as Southern Cal assistant professor Laura Isabel Serna explains in her description of the publication:

Cine-Mundial, the Spanish-language version of Moving Picture World, was published between 1916 and 1948. The magazine documents Hollywood’s growing dominance in Latin American markets in the 1920s and the emergence of national film industries, such as those of Mexico and Argentina after the introduction of sound film. Far from being a mere translation of its English-language counterpart, Cine-Mundial focused on issues that were important to its readers in Latin America and Spain — the representation of Latin Americans on screen, the geo-politics of film distribution, and Hollywood's short foray into Spanish-language film production in the late 1920s and early 1930s. Functioning as both trade publication and fan magazine, its regular columns that featured reports from national correspondents and letters from readers from every corner of the Spanish-speaking world provides invaluable insight into Latin American audiences and their reception of both imported and nationally or regionally produced films.

Incidentally, Serna has just written a book examining the develop of the Mexican film industry and the American influence, "Making Cinelandia: American Films and Mexican Film Culture before the Golden Age" (Duke University Press). It should also be emphasized that the magazine was not only distributed throughout the many nations of Latin America, but to Spain as well.

The addition of Cine-Mundial to the library provides yet more material to mine regarding Carole (though your pick and shovel had best be bilingual, and my knowledge of Spanish is at best cursory). Nevertheless, here are several examples of Lombard-related pictures through 1931, including a few I've never found in English-language publications.

We'll begin with what may be the first photo of Carole in any fan magazine (if that's how you define Cine-Mundial), from the August 1925 issue. At first glance, it doesn't quite look like Lombard, who had yet to reach her 17th birthday, but the caption refers to her work with Buck Jones (probably in "Hearts & Spurs"): 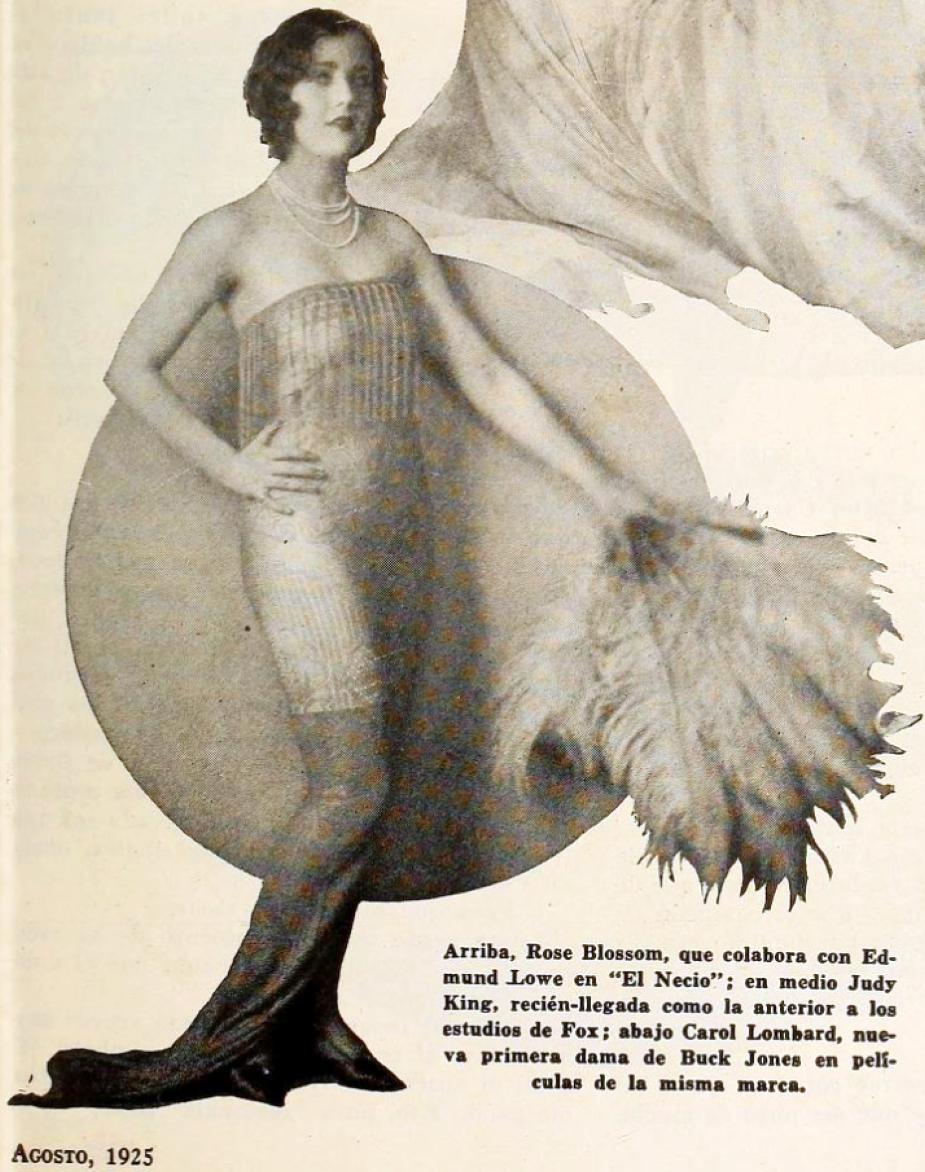 We move ahead to November 1928, when Lombard was beginning to gain fame for her beauty in Mack Sennett's troupe: 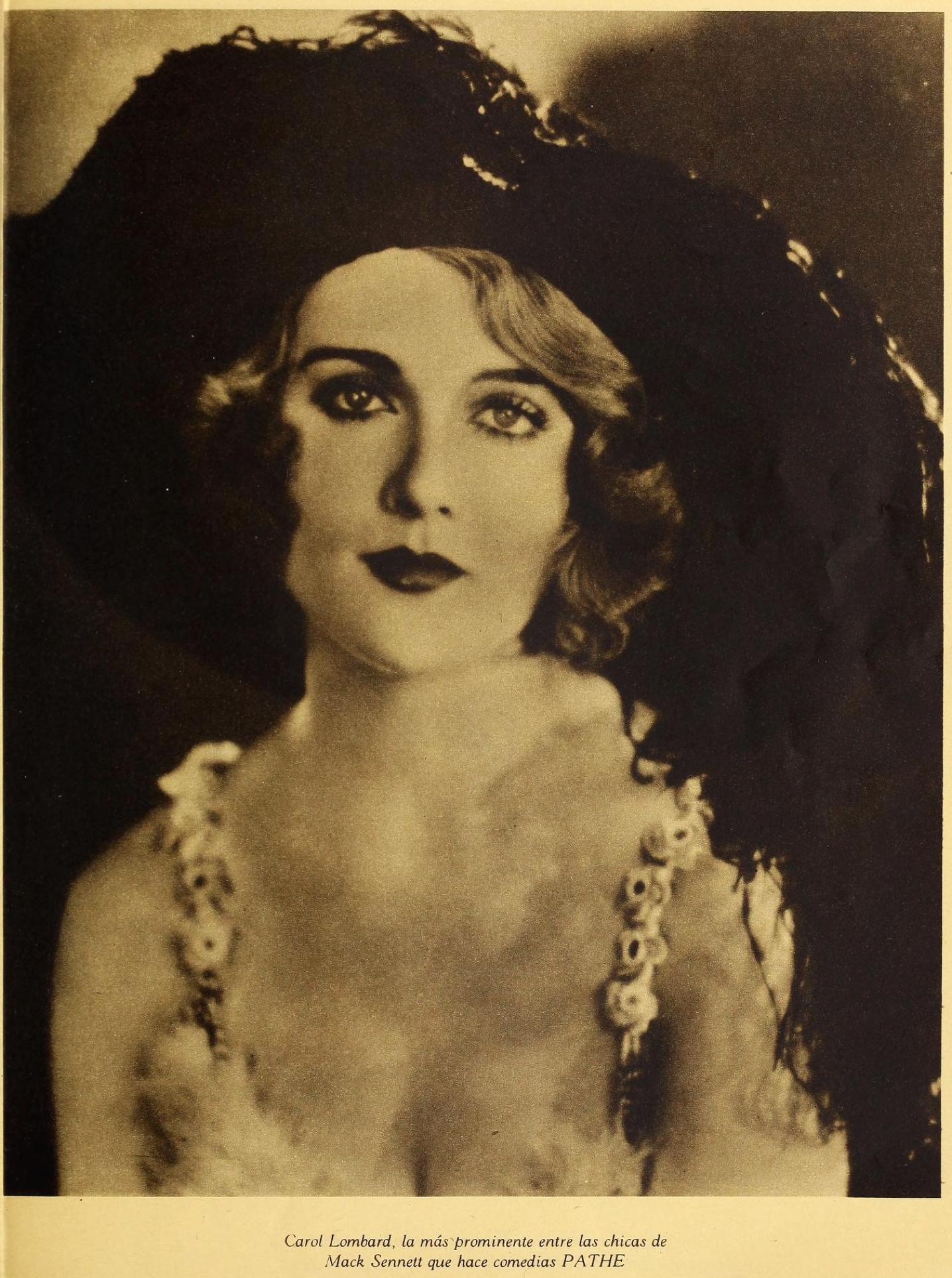 1929 would find Carole well represented in Cine-Mundial. This photo ran in the May issue, although one doubts she wore that outfit in her current film at the time, "High Voltage": 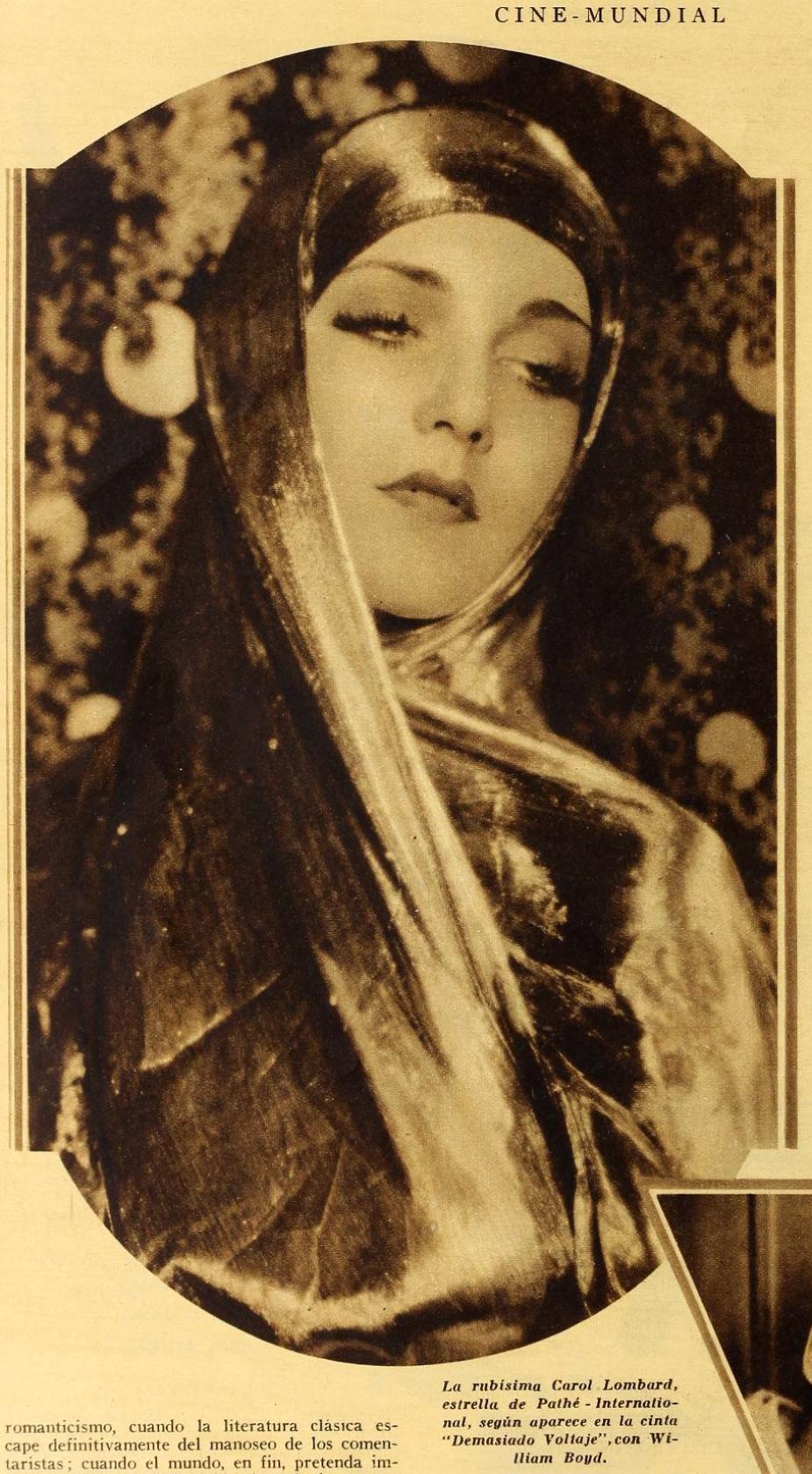 After that September '29 cover, a Cine-Mundial fan could find Lombard in every remaining issue listed as from 1929. She's part of a group pic in October with some fellow Pathe players... 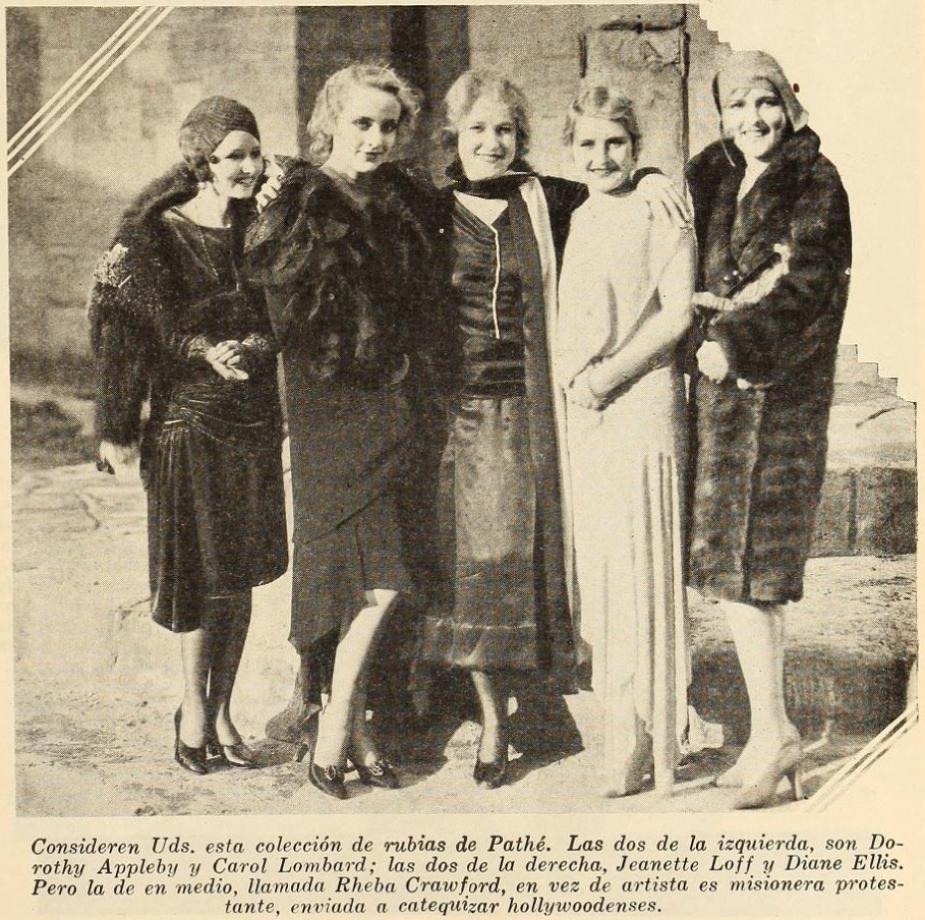 ...was seen in November as part of a magazine-related ad for star photos (and Carole's in good company, alongside several elite stars of the time; one-third of the 24 either spoke Spanish or were of Hispanic origin)... 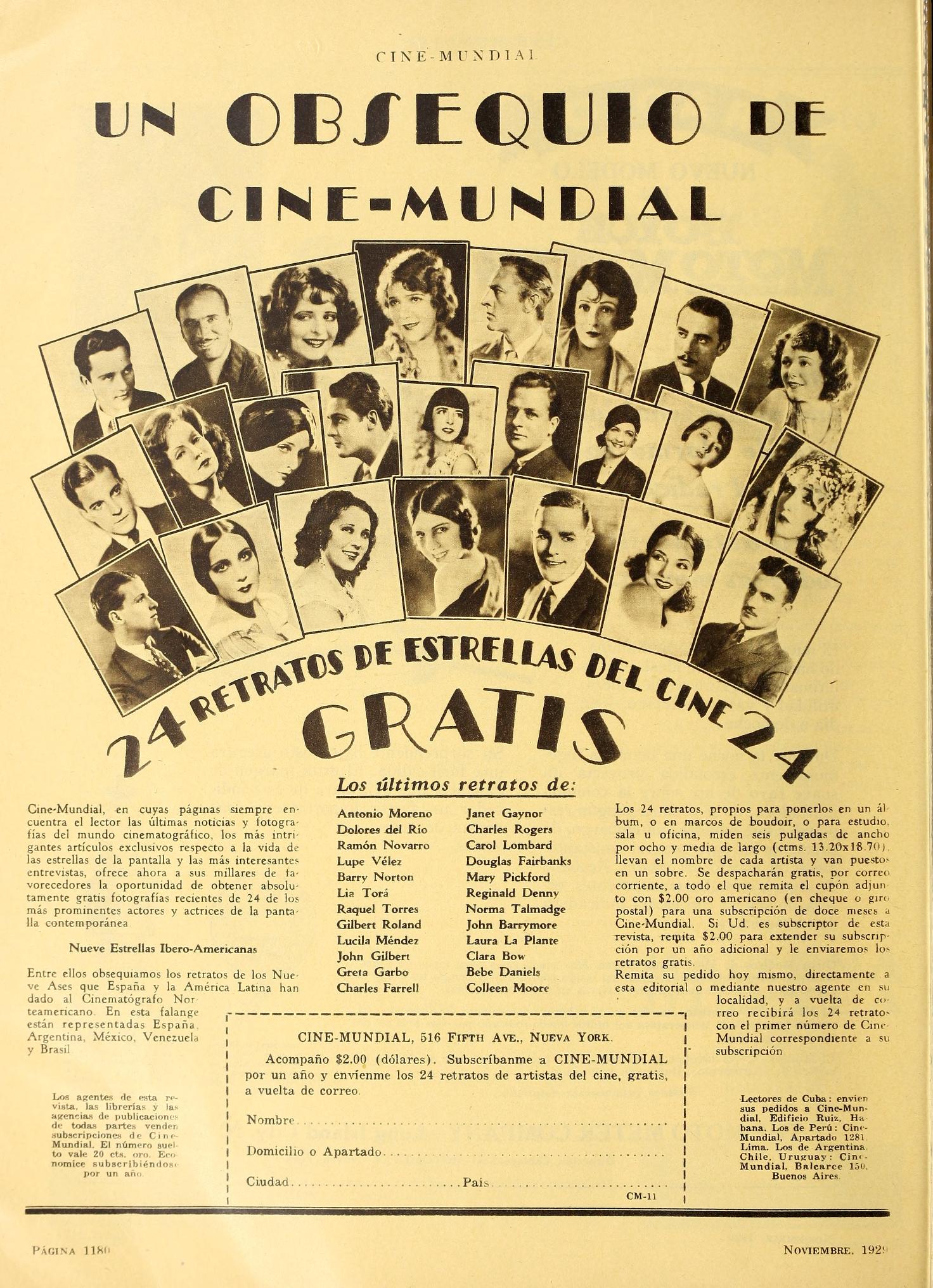 ...and in December, she was all over the place in three beach shots. One was with ill-fated Pathe mate Diane Ellis...

...another was with a charming puppy... 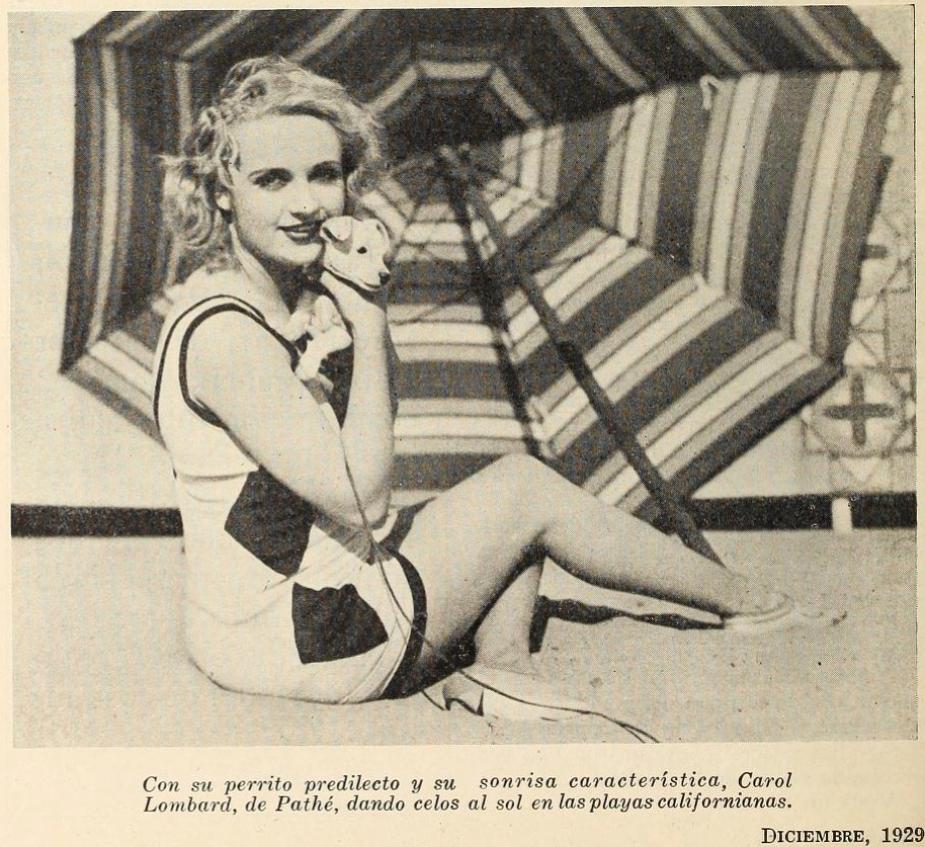 ...and finally, one all by herself: 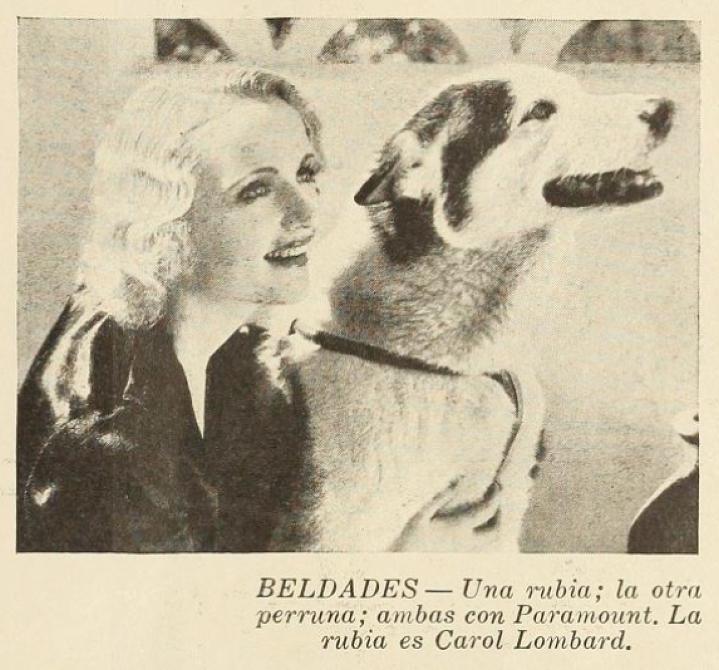 ...is visible in a full-page portrait in April, as well as being part of a fashion display that month... 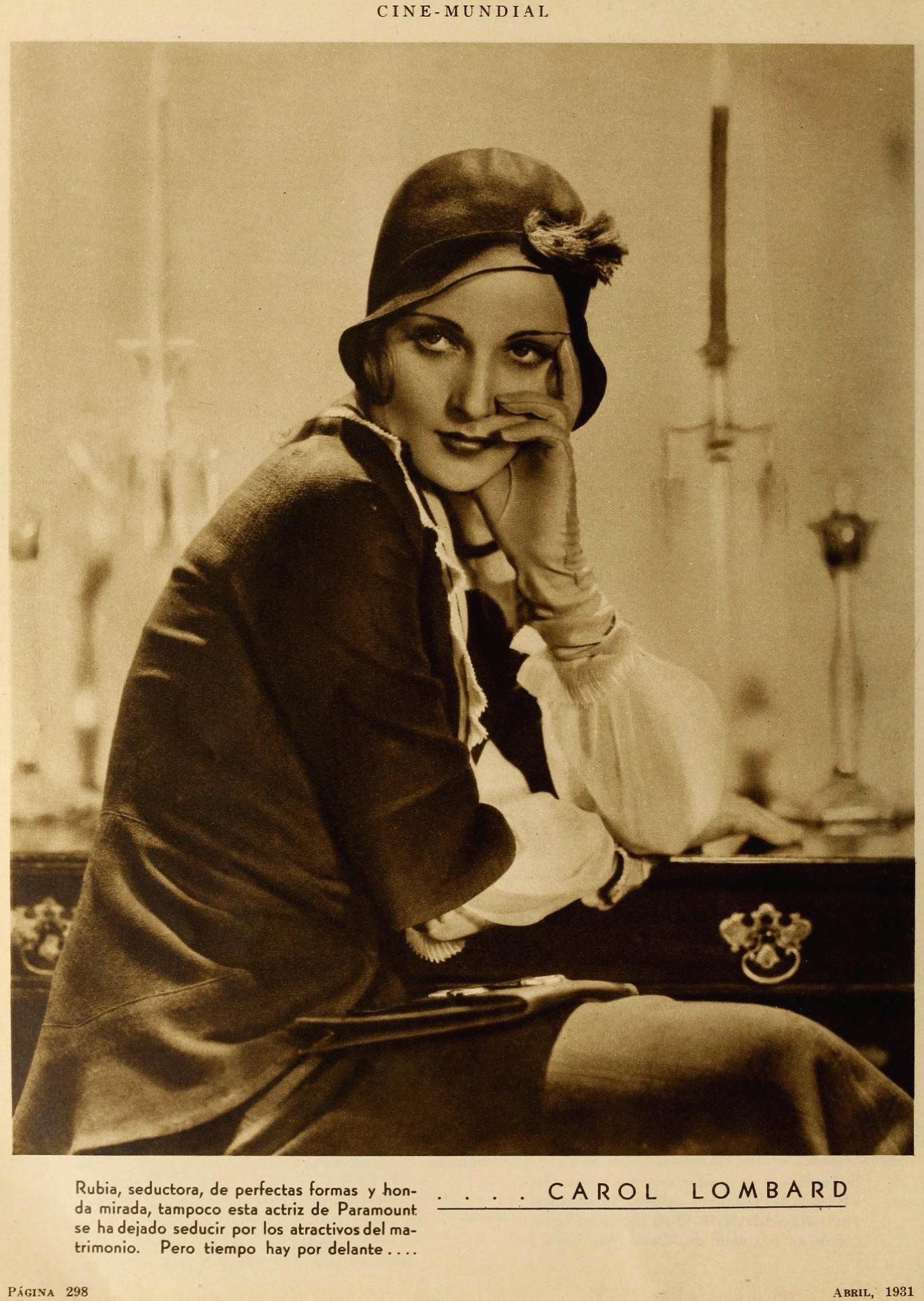 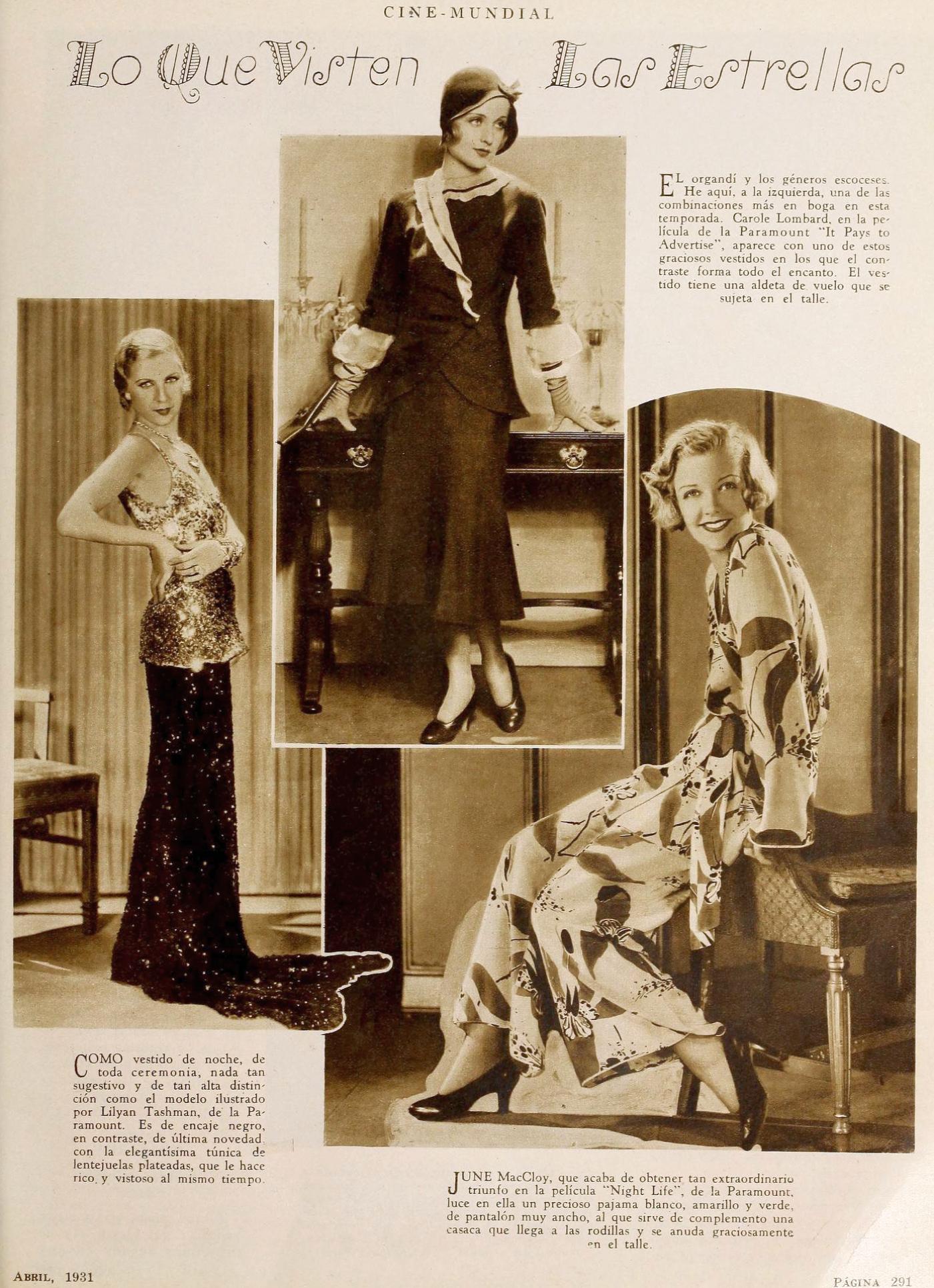 ...looked elegant in August (William Powell's name was in the caption, though I'm not certain whether this went to press before they married in late June)... 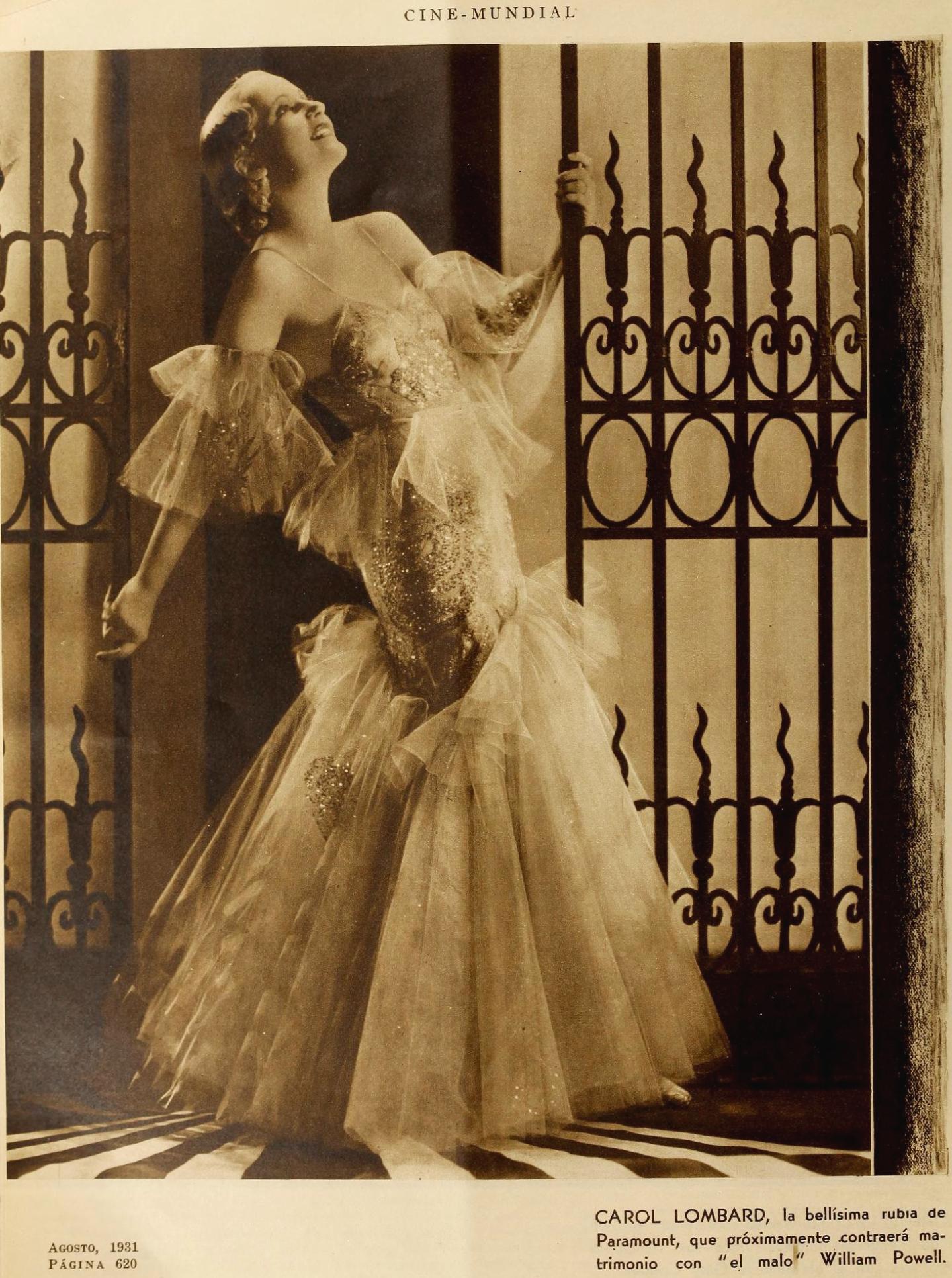 ...and posed under the shadow of a palm tree to promote "I Take This Woman" with Gary Cooper in the September issue: 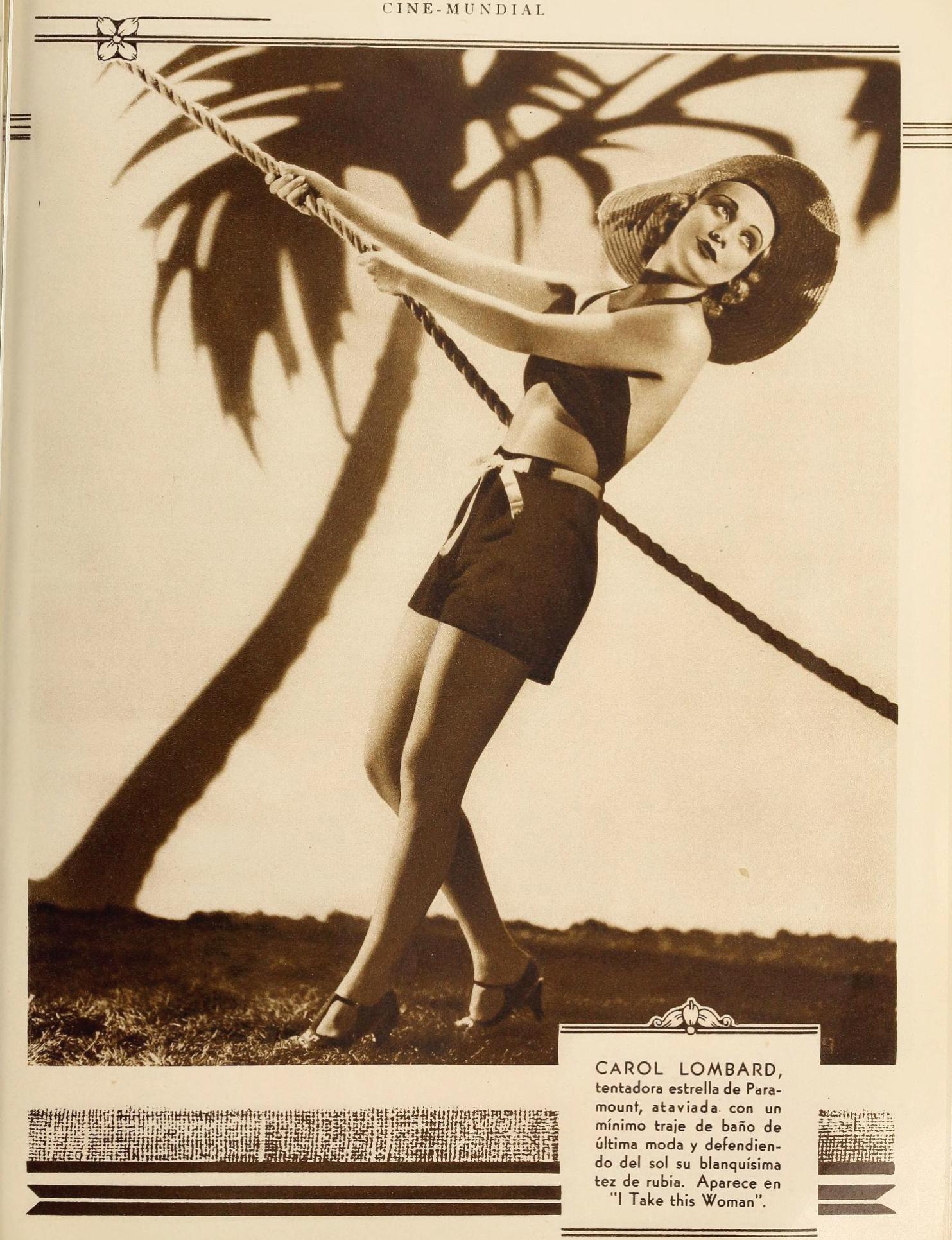 Would any of you care to translate the captions?

If you'd like to check out Cine-Mundial for yourself, visit http://mediahistoryproject.org/ and go to either the Hollywood Studio System or Global Cinema collections.
Collapse